“Be prepared.” It’s the traditional Girl Scout motto. That’s why I’m sharing this super easy No Churn Cinnamon Ice Cream. It shouldn’t matter that summer is coming to an end. ‘Tis the season for cinnamon, is it not? Why, yes. Yes it is. 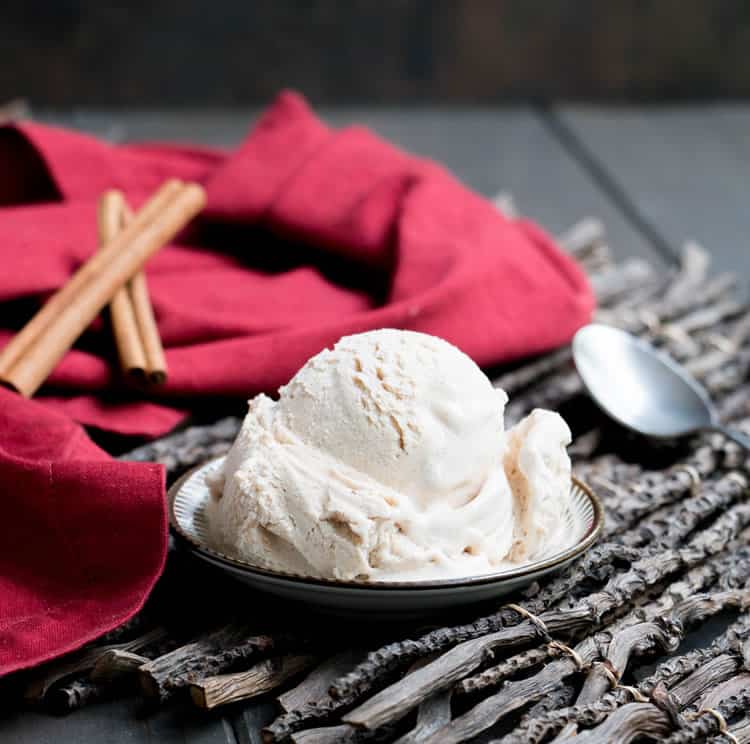 And you’re going to want some No Churn Cinnamon Ice Cream on hand this fall, are you not? Hmm, I guess we’re going to have to see about that one…

I never really thought too much about cinnamon ice cream until, a million years ago, I had some family visiting during the fall. While they were in town, I decided to take them to a local apple festival. 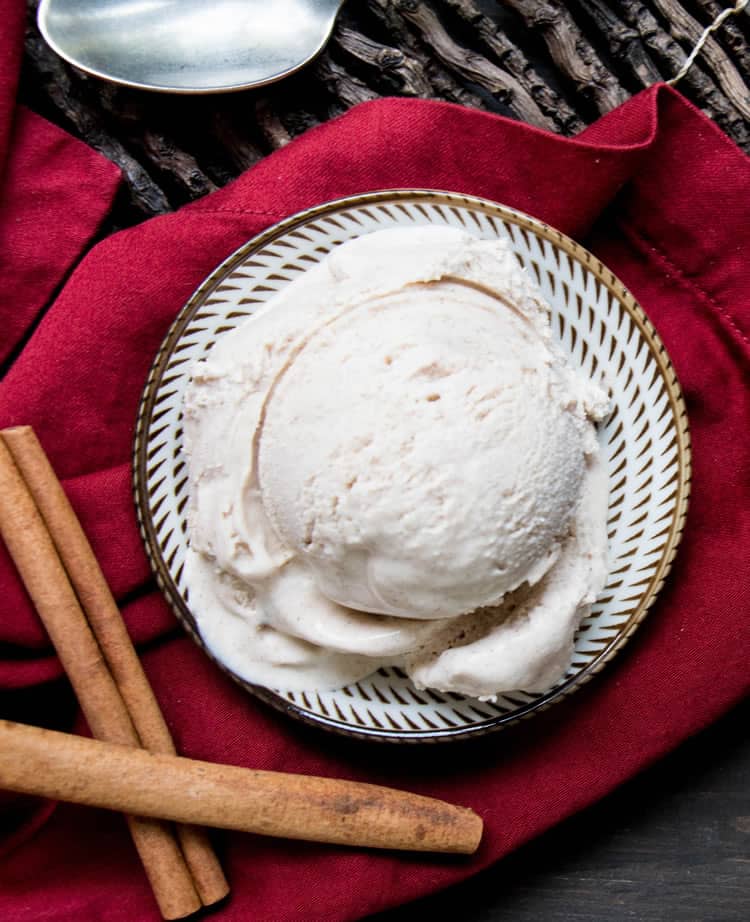 You know what you find at apple festivals, right? Apple pie and apple doughnuts, candy apples and caramel apples, apple fritters and apple cider. Yes! Give me aaallll the apple treats!

On that particular day, we decided to buy some apple dumplings to take home for dessert. I just knew we would want some ice cream to add to them.

If I’ve mentioned it once, I’ve mentioned it a hundred times….it’s basically a mandate in my house to top warm desserts like peach, cherry and pear cobbler with a scoop of vanilla ice cream. I love it on top of caramel apple crostatas…Oh, and shortcakes and brownies…

In any case, I made a quick stop at the store to pick up a 1/2 gallon of vanilla ice cream on the way home from the festival.

Except, I didn’t buy vanilla ice cream. I spied some limited edition cinnamon ice cream and thought that it would be perfect for our dessert!

I wish I had a photo of those apple dumplings. They were huge! Each one was a large apple completely wrapped in buttery pie crust.

We bought one for each of us, but I thought we’d probably end up splitting them or at least having leftovers, they were so large. Plus, we were adding ice cream to them! Cinnamon ice cream. 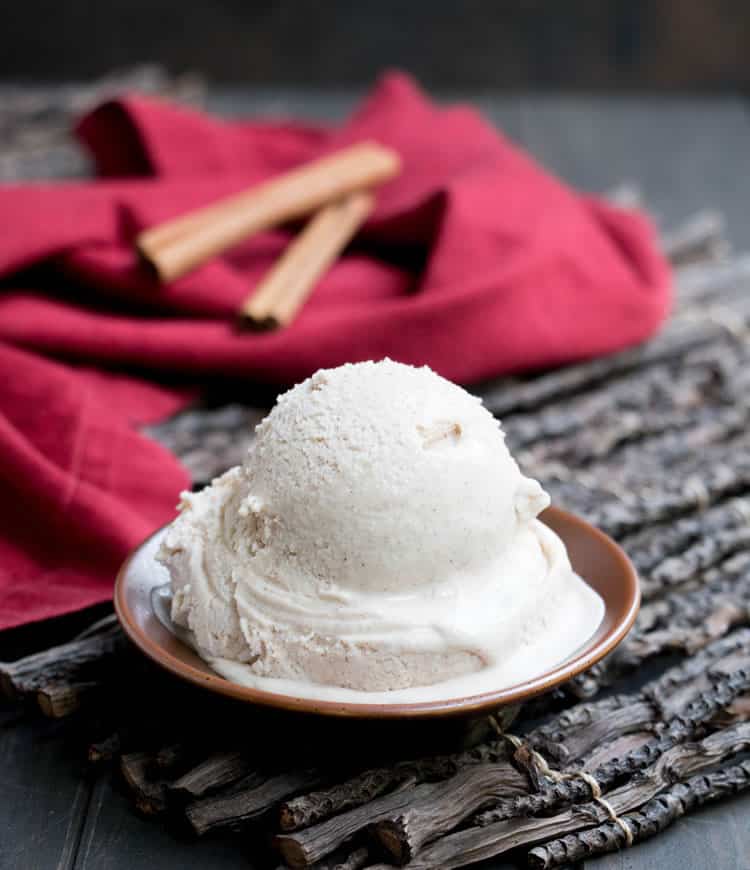 When it was time for dessert, I warmed up the dumplings and added a nice scoop of ice cream. Warm and spicy apple filling, buttery pie crust and cinnamon ice cream getting all melty and mixing in with the apple and crust.

It was heaven! The cinnamon ice cream was the perfect choice! It was a little extra spice that complemented the apple dumpling perfectly! And, the heat of the warm dessert helped intensify the cinnamon flavor of the ice cream.

Of course it was a perfect match. I didn’t think it wouldn’t be. But, I was a little surprised at how much better our delicious dumplings were with the cinnamon vs. vanilla. 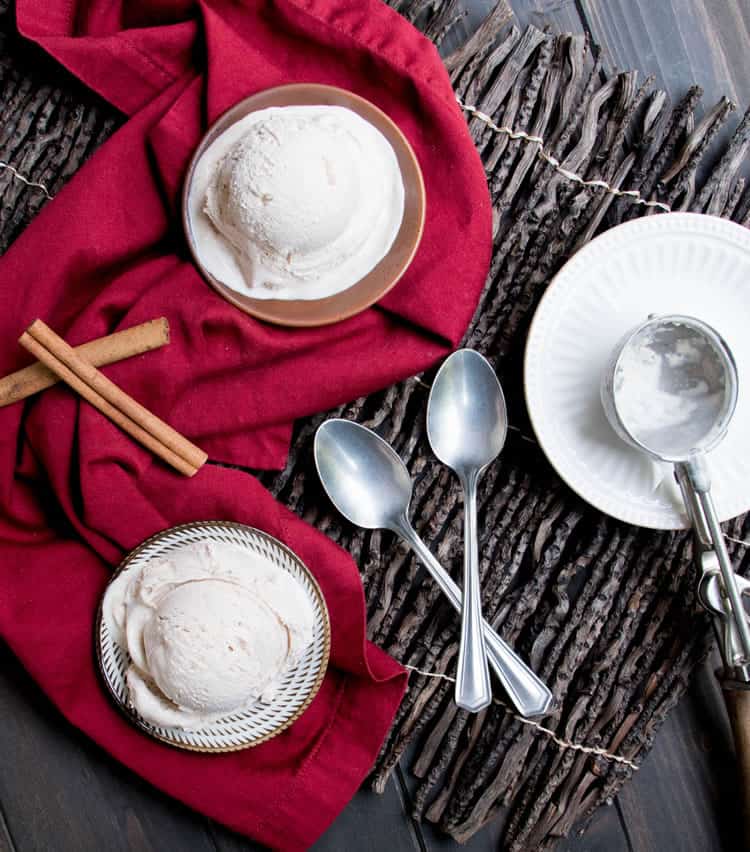 Now, I could have posted a traditional ice cream recipe that would require that you own an ice cream maker. But, hey, we’re all pretty busy and isn’t it great to be only 3 ingredients away from a super easy ice cream?

I have a couple of other no churn ice creams on the site…No Churn Nectarine Ice Cream and No Churn Nutella Cheesecake Ice Cream. And I also have incredible ice creams that need to be churned like Ultimate S’mores Ice Cream and Seaport Salty Swirl Ice Cream in case you’re so inclined to go the traditional route. They are absolutely worth every bit of effort.

If you’re new to no churns, you’ll be surprised at how easy they are. For this recipe, you’ll simply mix sweetened condensed milk with ground cinnamon.

I used 2 teaspoons of cinnamon, but you can adjust to taste. I think 2 teaspoons is probably a good main stream amount that most will like, so I would start there. If you want a stronger cinnamon flavor, add more to taste.

I used a Vietnamese cinnamon, which is more intense than your average grocery store variety. So it will depend on your cinnamon. The good news is that it’s easy to add more if you want to. I might try a touch more next time. 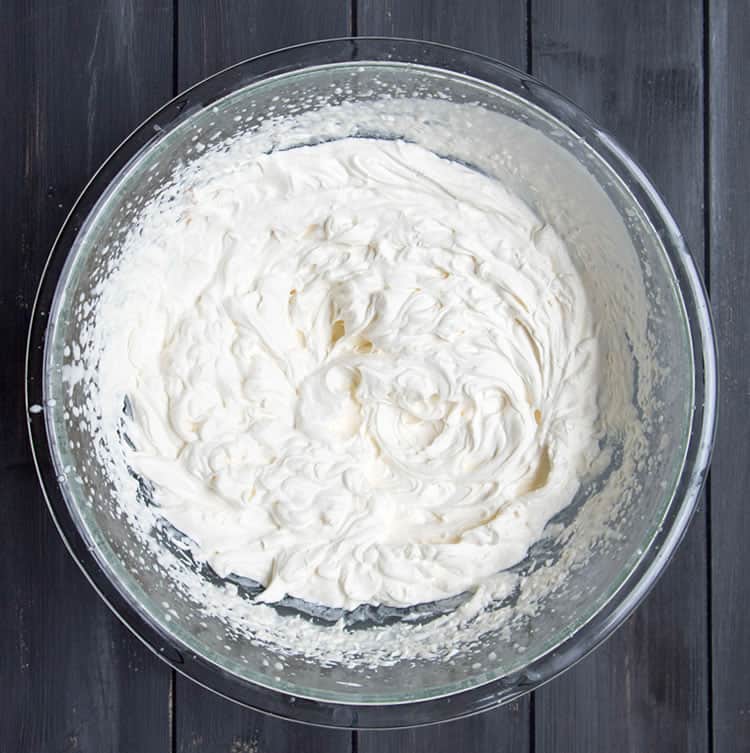 I just gently incorporate it so as not to deflate the mixture too much. You want air and loft in the mixture. It will make for a better texture. Once it’s lightly incorporated, I beat it for another 30 seconds or so to finish mixing it together and to add a little bit more air into the mixture.

That’s it! Pour it into a freezer safe container. Air is the enemy of frozen food, so I top the container with plastic wrap and press it directly on the surface of the ice cream mixture. Then, I put the lid on to seal it.

The following paragraphs contains affiliate links. We are a participant in the Amazon Services LLC Associates Program, an affiliate advertising program designed to provide a means for us to earn fees by linking to Amazon.com and affiliated sites.

I happen to love the Tovolo Glide a Scoop Ice Cream Tub. I’ve mentioned it in some of my other ice cream posts. I have one in green and one in peach. And, while I would really like to use some really cool rustic looking container to shoot my ice cream posts, this tub just works too well for me to pass up.

Remember, once I’m done shooting the post, I still have to store and scoop that ice cream for my family. So, it might be a summery bright green tub in the middle of my fall-ish No Churn Cinnamon Ice Cream post, but when I go to scoop out the ice cream, I’ll be oh-so happy that it’s in that tub.

First, it’s easy to open. You know how you try to open frozen plastic containers and it’s like trying to get into Fort Knox? Yeah. No issue here. There’s a little lip that’s easy to grab and pull the lid right off. 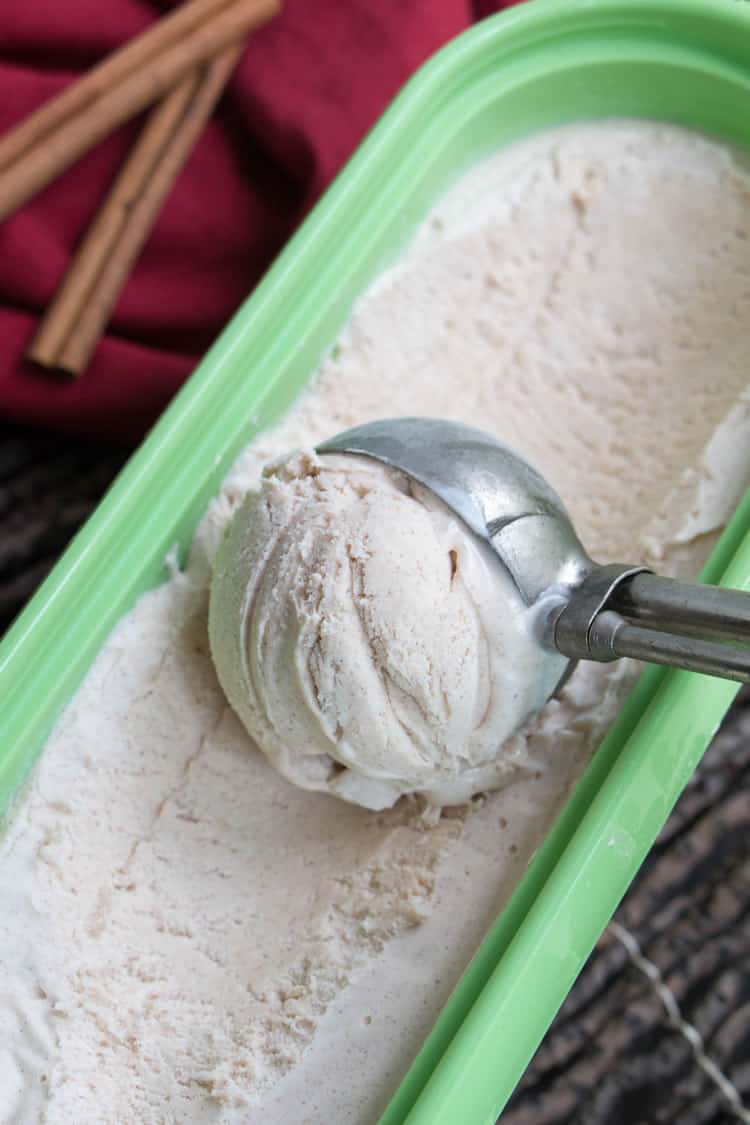 The shape is also perfect for scooping because it gives you a nice long track to glide your ice cream scoop. And it has a rubber base so it doesn’t slip while you’re gliding that scoop. All good things.

I originally purchased mine from Home Goods a few summers ago. That’s a hit or miss scenario since their inventory is ever changing. I’m sure you can get it other places as well, but I’ve provided an Amazon link for your reference.

So with all those yummy apple and fall spice desserts headed your way, you’d do best to follow the Girl Scout’s motto. Make a batch of this No Churn Cinnamon Ice Cream, and then, my friend, you’ll definitely be prepared!

Oh, and we each had no problem demolishing our own separate dumpling topped with that cinnamon ice cream. 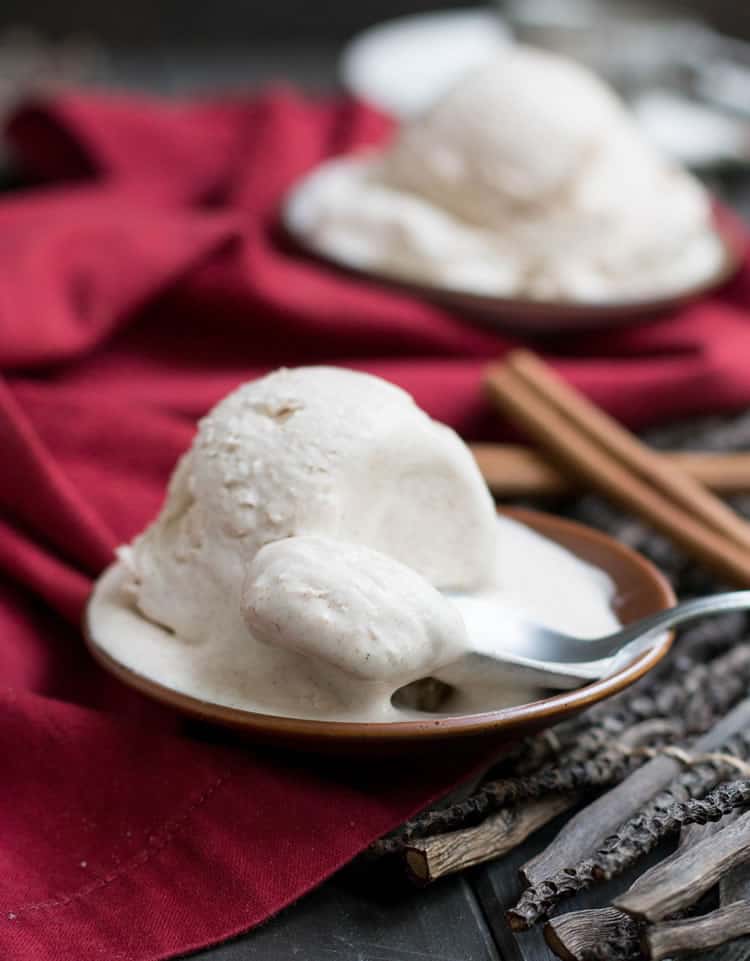 Just in case you were wondering :)

*You can add cinnamon to taste. Different varieties of cinnamon have different tastes and strengths. I think 2 teaspoons is a good middle of the road amount. Mine was a generous 2 teaspoons and I wouldn't rule out trying a full Tablespoon next time.

*If I don't have one of my favorite ice cream tubs available, I'll use a 9 X 5" loaf pan. I like to line the pan with plastic wrap before pouring in the ice cream. Then I'll press plastic wrap on the surface and seal the top well with a piece of aluminum foil.

Hi, I'm wondering how you would convert this recipe to machine churn ice cream. I have a smaller ice cream machine that doesn't require rock salt.

Hmmm, well, the whole idea with no churn is that you don't need an ice cream machine. I suppose you might not need to whip the cream if you use an ice cream machine. I can't guarantee anything, but my guess would be that you would simply mix the ingredients together. You could whip the cream, if you wanted to, but I can't imagine that it would be necessary. After mixing everything together, I would let it chill in the refrigerator overnight. That's what I do with my other regular churn recipes. Then, pour it into your ice cream maker and follow the directions of your machine. Or, you could check out my Ultimate S'mores Ice Cream and just make the base ice cream part as directed, but add cinnamon. Follow the directions there, ignoring all the s'more add ins. Either way, I think you'll end up with some yummy ice cream! (Since you're heating that mixture up, you could even add some cinnamon sticks and let them steep in the hot mixture, straining them out before you add it to the machine.)

You read my mind! I've had Cinnamon ice cream on my mind for some time now, and wondered if your no-churn base would work for it-now I know it will, and I can't wait to make this! thanks so much!

Perfect timing! Love when that happens!