I had grand ideas for this ice cream. 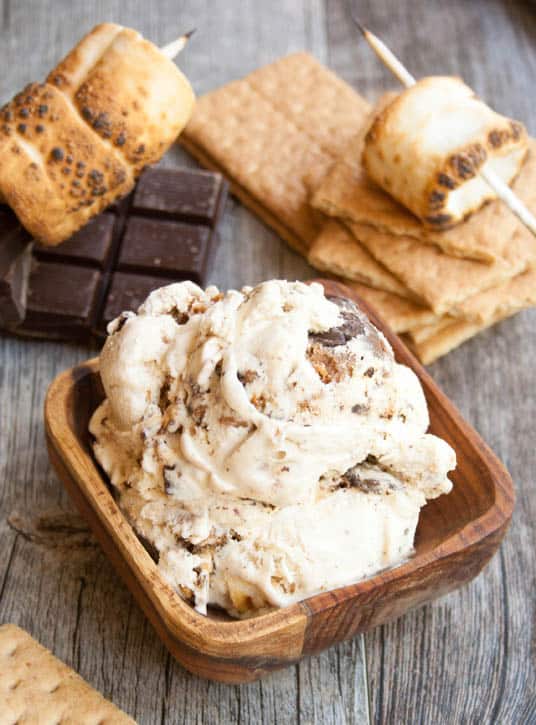 And I actually thought, through the entire process, that it was going to be a grand fail. But I decided to persevere to see if it would all work out.  I made Ultimate S’mores Ice Cream and put it in the freezer and it was there for a week.

But I hadn’t, partially because ice cream shoots are slightly stressful since your subject matter melts in mere minutes while you try to capture it’s best qualities. And, partially because I was certain that the marshmallows had frozen into solid inedible rocks. 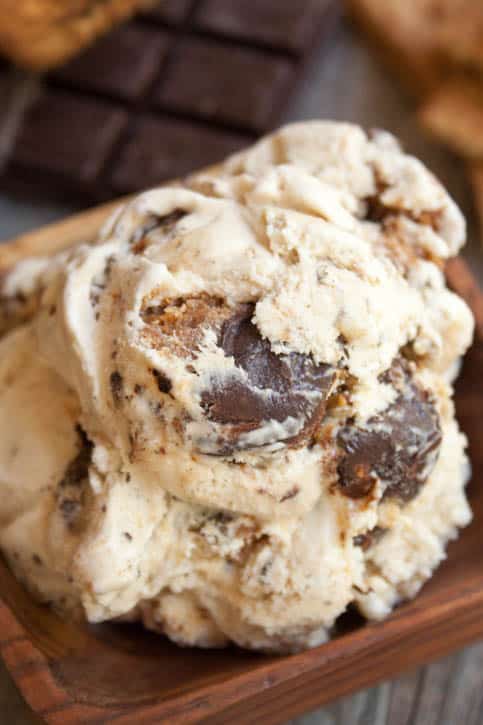 I wanted this ice cream to be over the top s’more delicious so I took every element of a s’more and amped it up to it’s most delicious version. I wanted to have real whole roasted marshmallows in it.

I read other recipes for ice cream with marshmallows in it.  Many of them use a blender to completely blend the marshmallows thoroughly into the ice cream base, but I wanted actual roasted marshmallow texture along with the flavor.

I lined up my marshmallows and broiled them until they had deep dark roasted tops.  I wanted to make sure I got plenty of roasted flavor. 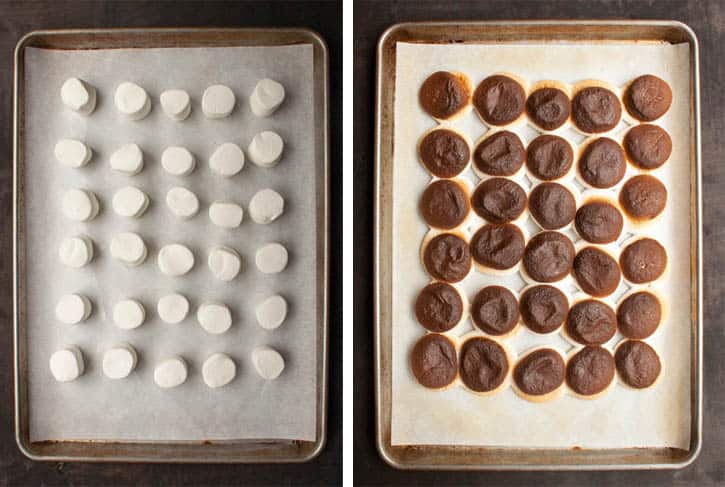 I used the ice cream base from Seaport Salty Swirl Ice Cream because that was such a huge success.  I let my roasted marshmallows cool and then started dropping them one by one into the churning ice cream.

They froze a bit and stuck together and got a little clumpy.  Ugh!  I stopped the machine, used a spoon to clear the marshmallow traffic jam and proceeded. This time, I dropped in smaller pieces of marshmallow.

That worked. I didn’t want to put all of the marshmallows into it, but I did want to make sure the flavor was definitely well mixed into the ice cream base.  I saved the rest of the rows to layer into the ice cream. 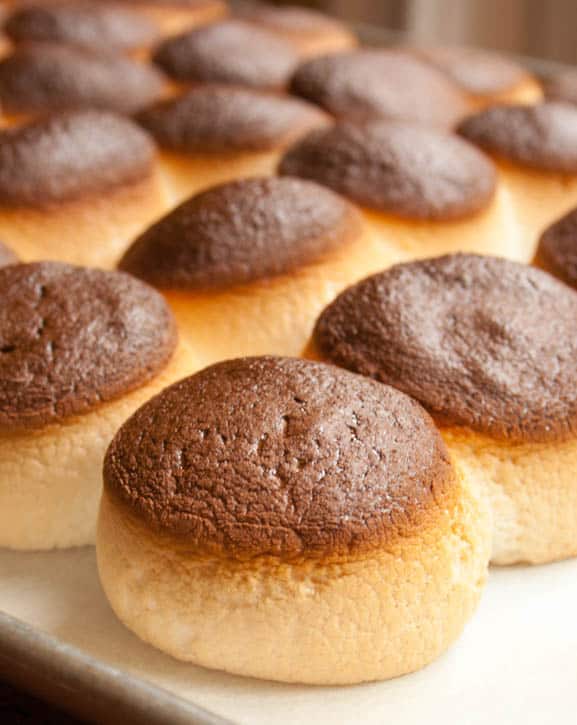 I considered just breaking up some graham crackers and putting them in the ice cream, but really, graham cracker crust is so much better, so I mixed up cracker crumbs, melted butter and a little bit of sugar and quickly baked a flat crust.

For the chocolate, in order to get more of that melty sense you get from a real s’more, I decided that I would make chocolate ganache. I don’t like cold chunks of chocolate in ice cream anyway.

Ice cold chocolate is hard to taste; I knew the ganache would not freeze into solid chocolate. It would have more of a smooth, possibly chewy texture that would melt more easily in your mouth. 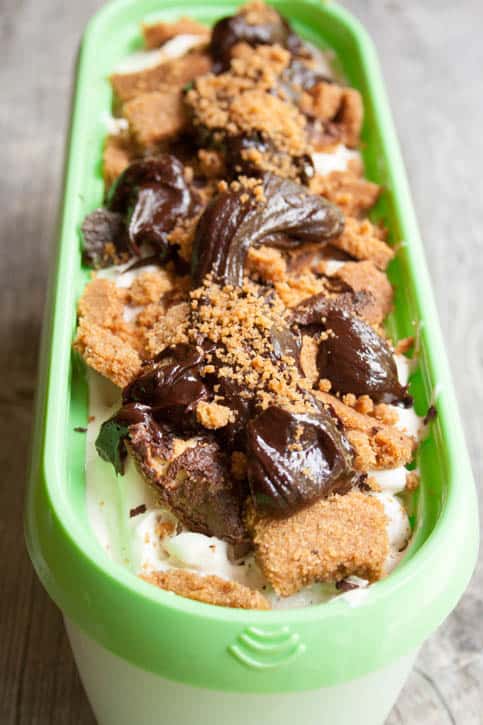 I considered just serving up what I thought would be failed ice cream and just skipping shooting it. Why would I think all those lovely ingredients could possibly fail me? I imagined the marshmallows that got so freezy when I was churning would be like hard candies, messing up the texture of my ice cream.

I thought they might ruin the eating experience if they were so sticky they would just get caught up in your teeth. In the end, I figured I’d just spend some time shooting it, because, you never know….until you know. 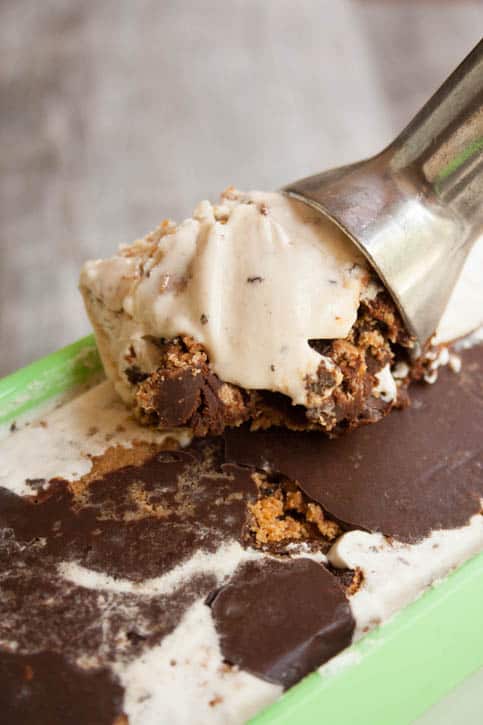 What I know now is that my amped up Ultimate S’mores Ice Cream turned out amazing!!!  The roasted marshmallows that I was so adamant to layer in whole, actually softened up into fluffy, gooey puffs of perfect roasted marshmallow yum.

They weren’t hard. They didn’t stick to your teeth; they were better than I could ever have expected! The ganache did it’s duty as the perfect smooth chocolate river, no chunks, easily scoopable.

Then the graham cracker crust?  That was a winning call and worth the little time it took to make it.  The texture was amazing, sort of like a soft, slightly chewy graham cookie, soooo much better than dry graham cracker pieces or powdery crumbs.

All the pieces and parts worked together like it was always meant to be! Trust me, you’re going to want a second scoop of this. 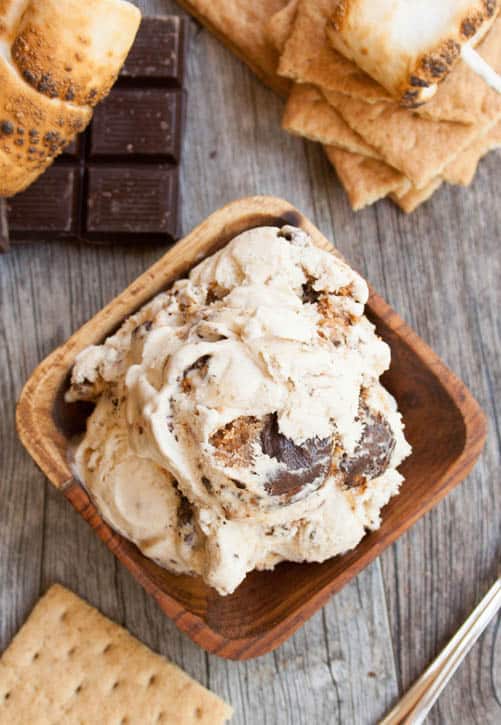 It’s still in the mid 90’s here in Philly and it seems like most of the country is dealing with a heat wave. Ignore the fact that Labor Day has come and gone. Take this grand idea for a frozen treat based on one of the classic flavors of summer.

Have faith that roasted marshmallows and ice cream were just meant to be together. Make an easy graham cracker crust that will never see the light of pie. Find out how quick it is to make a creamy ganache. Because this grand idea? 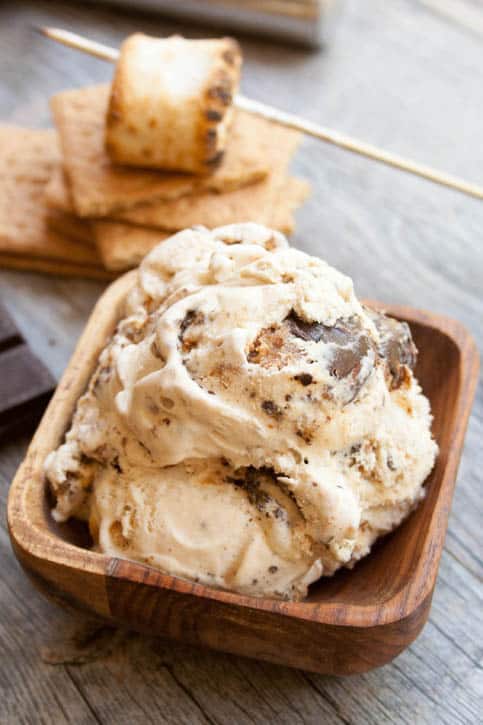 For the ice cream base:

For the graham layer :

*The ganache, crust and marshamallows will take some time to cool before you use them. They must be cooled to room temperature before you layer them with the ice cream or they will melt it. So don't even worry about churning your ice cream until your add ins have cooled and are ready to use.

*The ganache will take the longest to cool. You can speed this up by placing the bowl into another larger bowl of ice and water, stirring occasionally and being careful not to let any water get into the ganache. You do have to keep an eye on it though, because if you allow it to become very cold, it will begin to solidify and be more difficult to spread.

*Don't let my marshmallow tray confuse you. I roasted 30 marshmallows not knowing how many I would need, but only used the 25 that are called for in the recipe. The add in quantities don't have to be an exact science, use as much or as little as you like.

*I used a dark chocolate ganache to balance the sweetness of the ice cream and marshmallows. If you're a die hard milk chocolate fan, use milk chocolate instead. Ice cream base slightly adapted from Seaport Salty Swirl Ice Cream

Definitely a hit at my house-will be one of my go-to flavors for sure!

Hi Kelli, we LOVE this ice cream! Happy to hear it was a hit!

This looks so amazing!

We honestly almost fought over the last of it last night. So sad that it's gone. Everyone wanted more:)

Oh my goodness!! This ice cream --- to die for!! Yummers!!! Just want you to know that I do so enjoy reading your blog each & every time. Whether I save your recipe or not (& I do save & have prepared many of them).... I absolutely love your writing style. I read & smile & often laugh at your experiences. You make my day! Keep up the great job you are doing--- love ya'!?❤️

Janice, your kind words have made my day! I'm so glad you're enjoying the writing (and the recipes:) Bloggers never know if anyone is actually reading the writing or making the recipes unless a reader comments or emails. I appreciate every single bit of feedback. Thanks for taking the time to share yours!