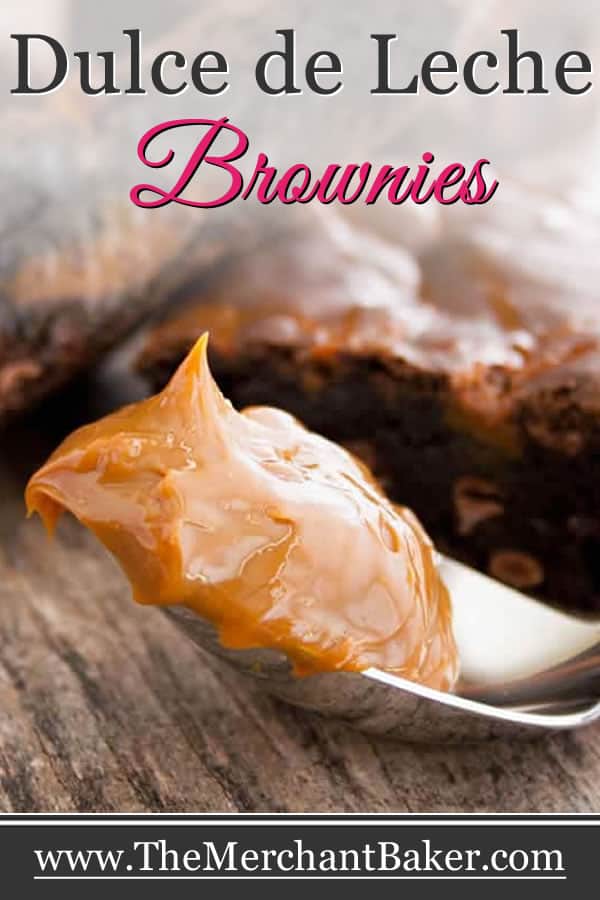 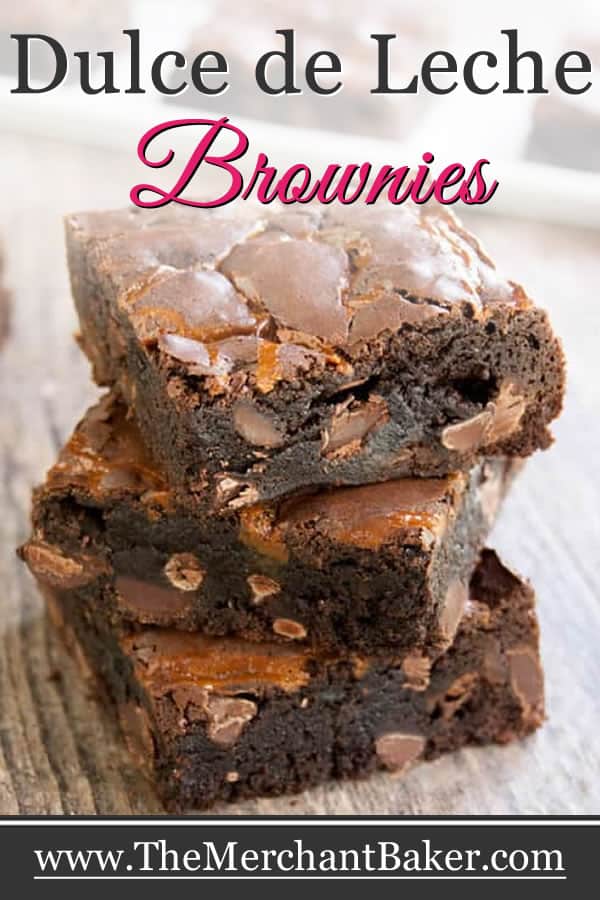 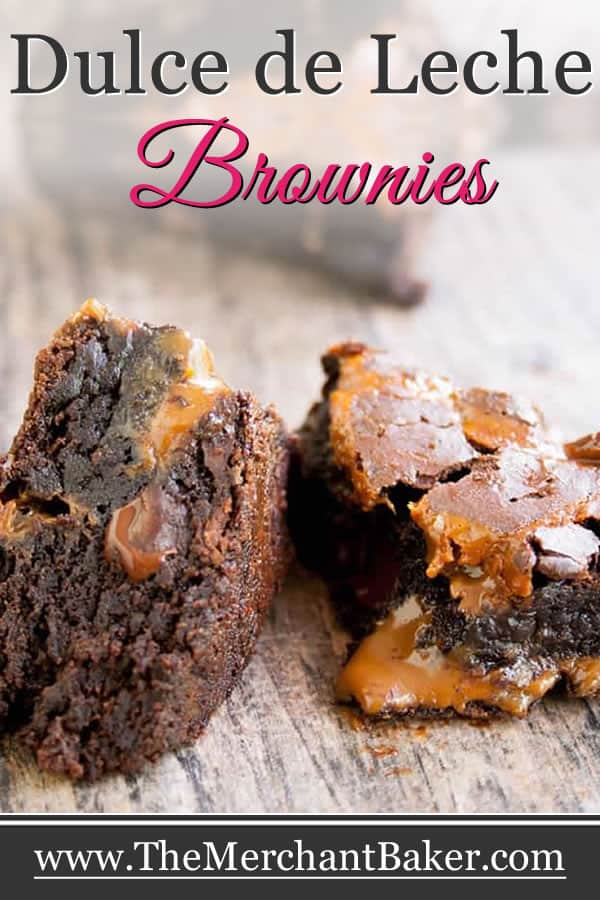 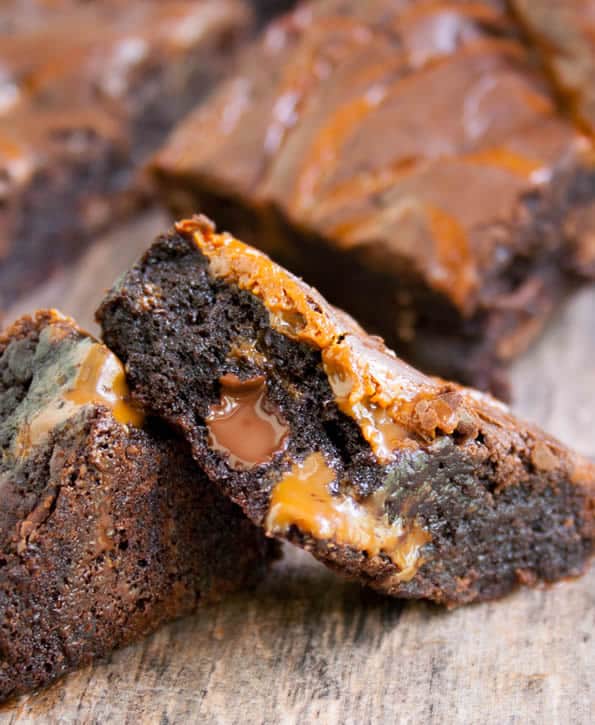 So was the teacher appreciation lunch for which I made these amazing Dulce de Leche Brownies. That was then. This is now. It’s Doce de Mayo and a fine day to share this really easy and ridiculously delicious recipe with you.

For a few years, I thought if the theme for this annual May event was ever Cinco de Mayo, I would make a Tres Leches Cake. I tucked the idea away for the future.

Then, when I heard about this year’s theme, I was ready to start baking…until I heard we didn’t need any cakes (What?!? No Tres Leches?!?) We just needed “pick up an go” sweets, like cookies and bars.  Okay, (pout, pout) I can do that. 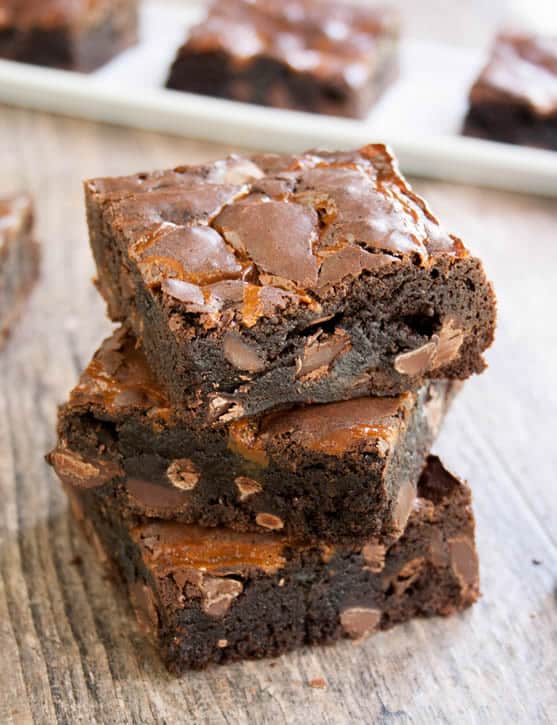 Another mother had already signed up for Mexican wedding cookies, so I thought I’d make some kind of bar. I wanted to stick with the theme and had plans for a different kind of Mexican brownie, but at the last minute, decided it might not have mass appeal.

Then, right before I was ready to bake, I had the idea to do a Dulce de Leche Brownie. I don’t know why I hadn’t thought of it before, I could have saved myself a shopping trip….to three different grocery stores. Not everyone carries dulce de leche, and I had no intention of making it from scratch. 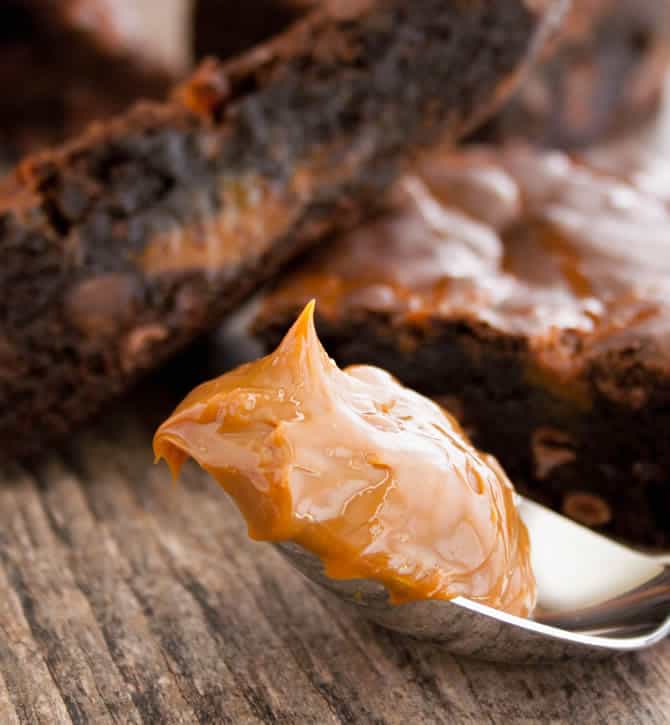 For those of you who might not be familiar with dulce de leche, it’s basically a sweetened milk caramel. It’s like caramel, but creamier.

You can usually find it in the international specialty foods aisle of some grocery stores. You might have to search a bit for it, but it’s worth it. 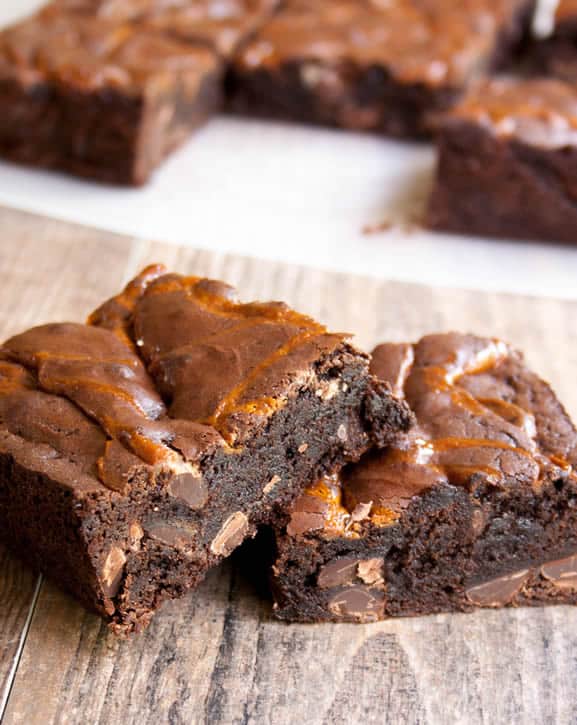 I will confess and tell you that I used boxed brownies for the teacher event.  I used my favorite Ghiradelli boxed brownies, FIVE of them.

I was using a  large 16″ square pan and I didn’t want to mix up brownie batter from scratch five times nor did I want to find out if my scratch recipe could scale up five times with no ill effects.

I tell you this because you might want to use boxed brownies for this recipe. It’s okay. I won’t judge. Either way, they’re going to be amazing.

The recipe I’m sharing today is from scratch. I’m only making one batch in a 9″ square pan, so no need to take the box mix short cut. I used the recipe from Black Cocoa Brownies with a few adjustments.

If you don’t often make brownies from scratch, you’ll be pleased to know that you can do it in one bowl. It’s almost as fast as a boxed mix. This particular recipe is my current favorite after a long search to find the perfect brownie. Click on over to the Black Cocoa Brownies post for more on that subject.

I talk a bit about different kinds of cocoa in that post and how each will give you a different flavor.  For today’s batch I used half Double Dutch Dark Cocoa and half Bensdorp Cocoa, just because I didn’t want as black of a brownie this time.

Use any dutch process cocoa you like for this, but those are some of my favorites. You can also substitute your typical unsweetened cocoa in this recipe, but you may end up with a bit of an acidic taste. Here’s a link if you want to know more about different types of cocoa.

Once your brownie batter is mixed, spread a little more than half of it in a square pan. Then, take about a half of a cup or so of dulce de leche and heat it for a few seconds in the microwave. You don’t want it to get hot, just a little more fluid.

Spoon dollops of the dulce de leche on top of your brownie batter. Use the tip of a knife to swirl it around. Don’t swirl it too much; you want pools of it in and around the batter. Then drizzle more around the empty spaces just to make sure there’s some dulce de leche in every bite. 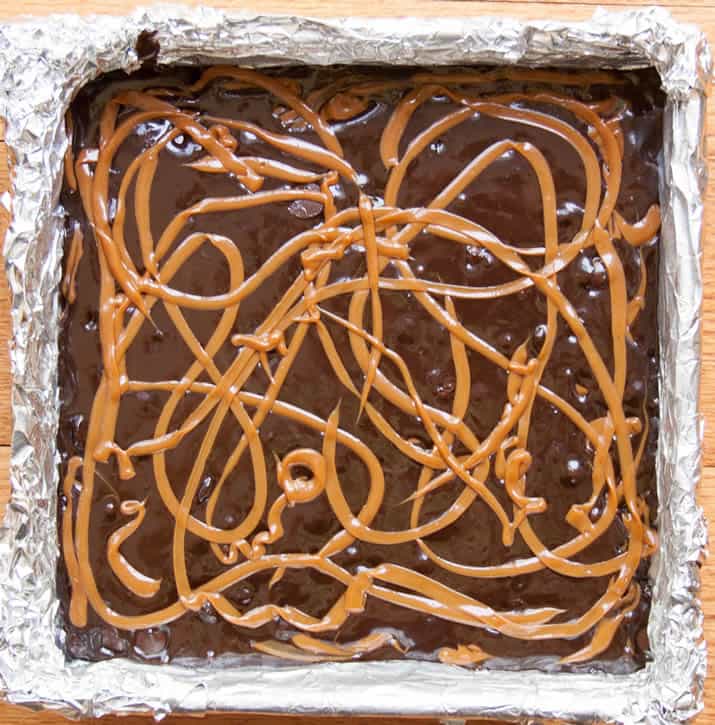 Spoon, then carefully spread, the remaining brownie batter on top of your beautiful dulce de leche swirls, then warm up a few more spoonfuls of dulce de leche and drizzle it all over the top.

Those little rivers of caramel yum will let everyone know this isn’t your everyday brownie. 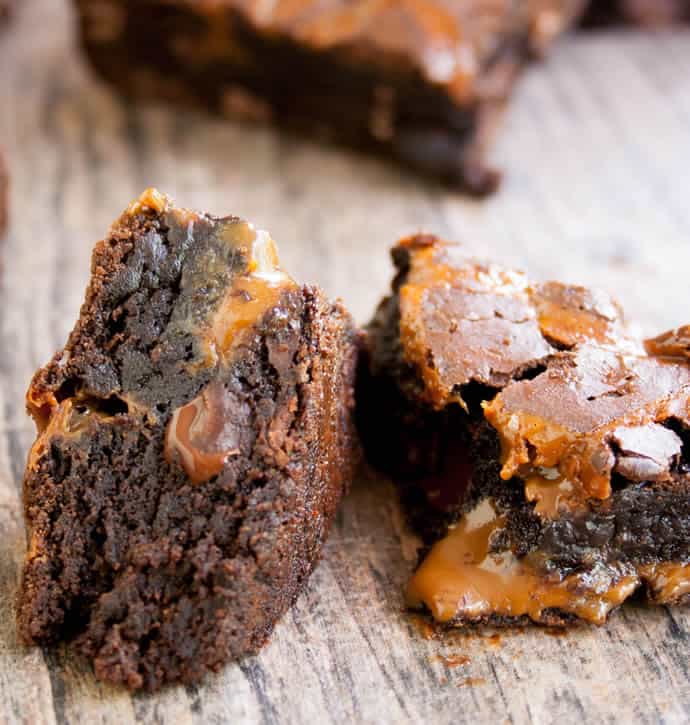 These brownies are great cold, room temperature, or heat them for a few seconds in the microwave and you’ll get little melty pools of dulce de leche and chocolate when you break into them.

I don’t think I need to mention that this brownie is screaming for a scoop of vanilla ice cream. I almost took that shot, but I didn’t want the ice cream to steal the show.

So, get your favorite box of brownie mix, or whip up a quick batch from scratch from the recipe below. Add some dulce de leche… and you’ll have one of the best brownies you’ve ever eaten.

That’s one way to show your appreciation.

* Brownies keep for at least three days in an airtight container at room temperature. They always taste the best on the second day. They also freeze well.

*Adding the chips with the dry ingredients helps keep the chips from sinking to the bottom. I used 1/2 semi-sweet and 1/2 bittersweet chips for a deeper flavor.

*I'm not giving exact measurements for the dulce de leche. I used approximately a heaping half cup. You'll have left overs from your can. Use it to top ice cream, waffles or pancakes, spread on cookies etc.

*You can substitute your favorite unsweetened cocoa in this recipe, but this particular cocoa is what makes this brownie my favorite. Expect that other cocoas will alter the taste. Using an unsweetened cocoa instead of dutched may leave you with a bit of an acidic taste. It will still be good, but it will be different.

Hello! Thank you for sharing your recipe! Love how you share your knowledge about chocolate as well (just read the Mayan Brownie post)! I LOVE chocolate and didn’t realize I could learn so much about it!

I have a semi large get-together I would like to make these Dulce de Leche Brownies for and would rather go the boxed brownie route. I’ve never tried Ghirardelli Brownies before but now I will! It seems your link is no longer working for them. Which exact one did you use? It seems Ghirardelli has different varieties. Thank you! I would be ever so grateful!

Hi Leslie, I like the double chocolate version. It's got chocolate chips in it and I just like the way it bakes up versus the other flavors. For me, it's just my go to boxed brownie. (Oh, and when you get a chance, if you love the idea of the Mayan brownies, put them on your list to make. I loooove that recipe too!)

Can i use melted butter instead of oil?

Ruth, yes, that would be fine!

Dulce de leche is from argentina, in mexico they say "cajeta but is argentinian

I didn't mean to imply that it's origins were necessarily Mexican. When I said Mexican brownie, I was actually referring to the one I didn't make, which was going to be one with Mexican chocolate and some spices. Instead, I went with a dulce de leche version. For the purposes of this brownie post, I simply meant it loosely as a whimsical ingredient addition that has a Spanish name. The dulce de leche brand that I buy is actually from Chile. And whether it's cajeta, dulce de leche, manjar or cortada, the bottom line is that in these brownies...it's DELICIOUS! :) Thanks for your comment!