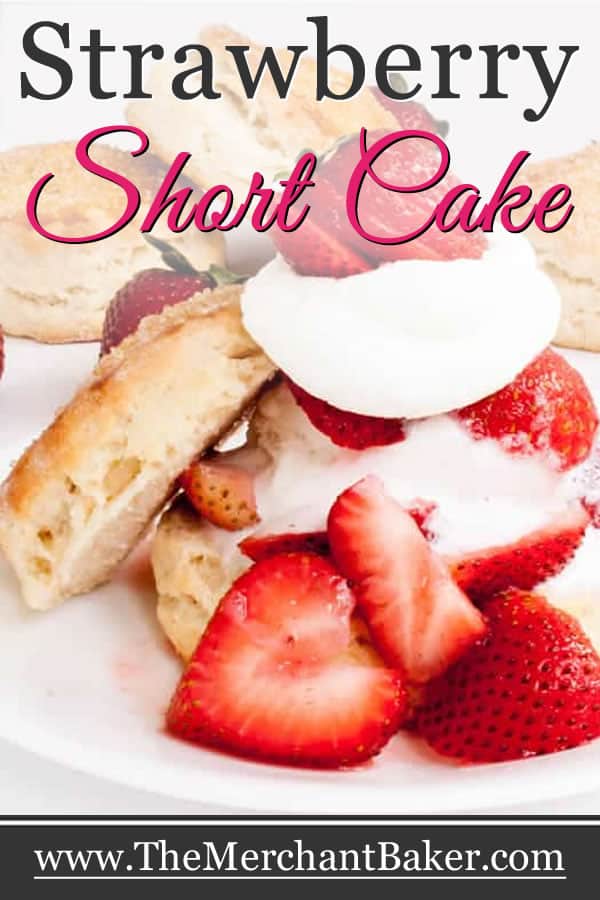 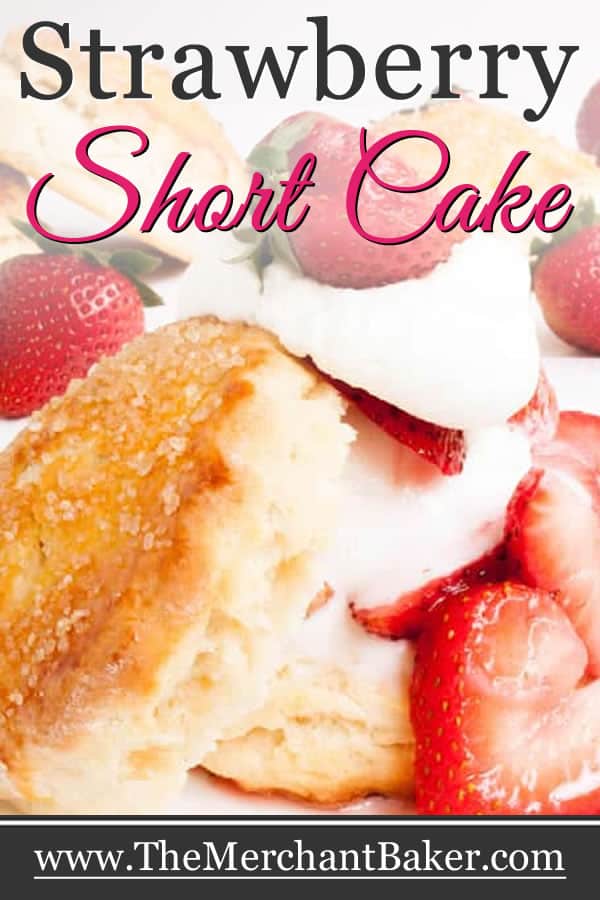 Strawberry Shortcake is easily one of my top five favorite desserts. 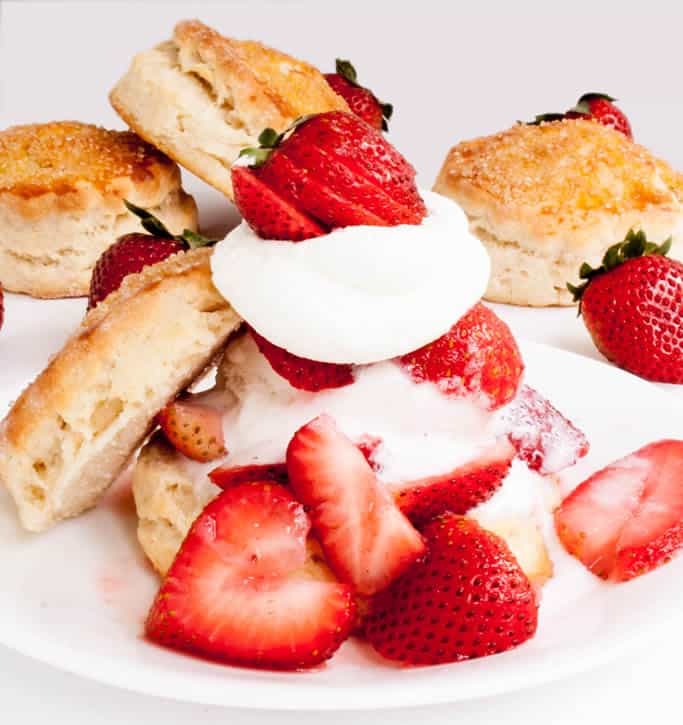 Most of the strawberry shortcake I had as a kid came on top of one of those little pre-formed shortcakes you see in the grocery store.  When we would go to out to eat, I would often order it for dessert to see what kind of shortcake each restaurant made so that I could find out who made the ultimate.

There used to be this restaurant where I grew up, called Kenny Kings’s.  It was a family restaurant and it’s where we used to go to get the most delicious Big King Burgers and Kentucky Fried Chicken before there were KFC’s. 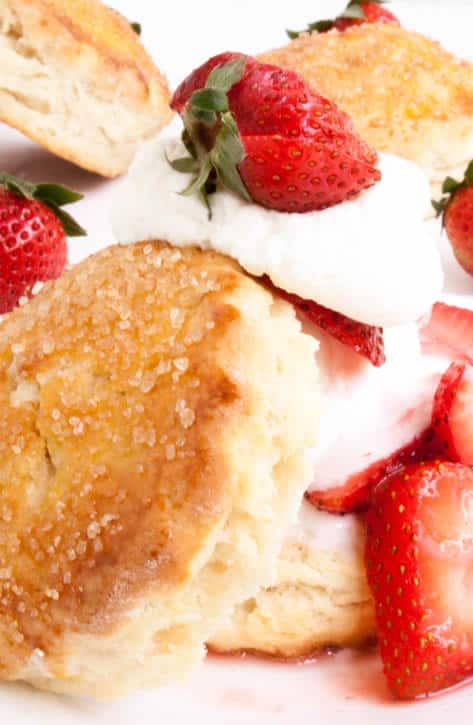 Kenny Kings used to serve the chicken in those ubiquitous red and white buckets and they made all the sides, mashed potatoes and gravy, cole slaw, potato salad and hot rolls. The sides they offered back then were not whatever the KFC chain offers up today. 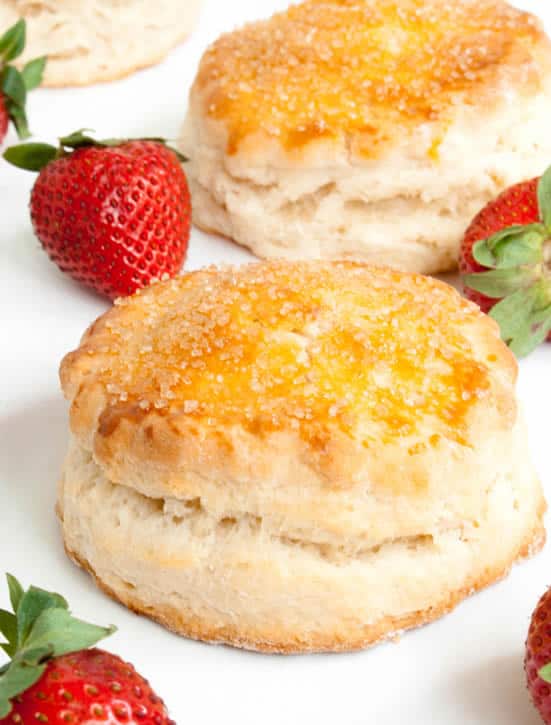 One day, a million years ago, I was in with my mother and decided to order the strawberry shortcake for dessert… you know… for my on going research project :)  I wasn’t sure what to expect, but I was intrigued by the fact that it was going to come on a biscuit.

As I mentioned above, I had only had it on sponge cake before. I remember when the waitress brought it out.  It was glorious!  There was this huge homemade biscuit with vanilla ice cream, loads of strawberries and it was topped with a pile of whipped cream.  I remember looking at my mom with, “you HAVE to share this with me” eyes.

It was absolutely delicious and I was sold on a biscuit based shortcake from then on.  Today’s recipe is also biscuit based but not quite like the Kenny King’s shortcake of my past.  It’s not a fluffy biscuit like my Fluffy Buttermilk Biscuits, nor is it creamy, rich and buttery like my Fresh Strawberry Cream Scones. 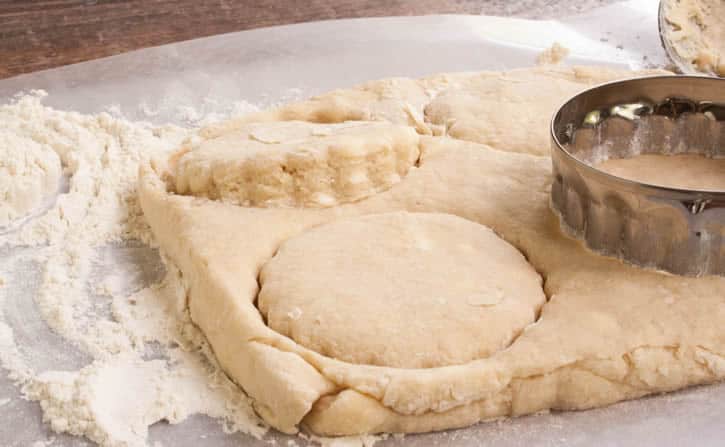 I decided I wanted a biscuit/shortcake with enough structure to stand up to the juicy strawberry topping. I also didn’t want it too rich with butter and cream because I would be adding ice cream to it later.

So I created a cross between the two and made a lightly sweetened, sturdy shortcake that is the perfect canvas for sweet and juicy fruit toppings and cream, whether whipped, poured or frozen. 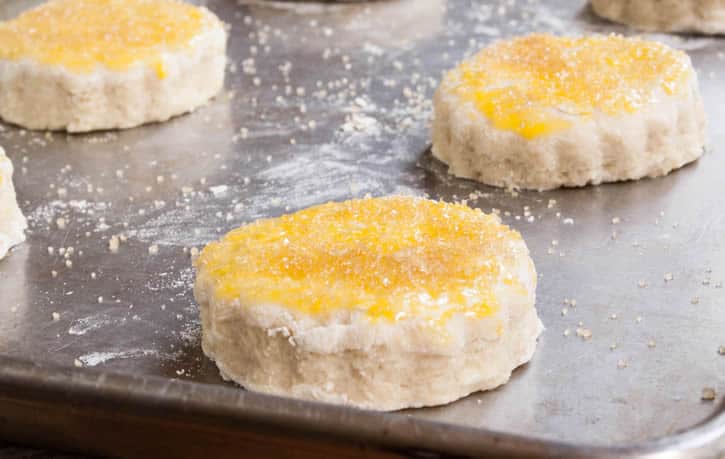 The dough mixing process is exactly like my Fluffy Buttermilk Biscuits, so head on over to that post if you want to see videos of the mixing, kneading, cutting steps. Today, though, I cut my little shortcakes into scalloped rounds, just for you.

You know I prefer to cut my biscuits in squares so I don’t get the lesser quality of those that come from subsequent scrap gathering and rolling. But today we have pretty little round shortcakes.

I should have taken photos of the pretty little shortcakes and their lesser friends that came from the second rolling side by side, just to illustrate my point about the benefits of one cutting, but alas, I did not.

You’ll have to take my word for it.  Those second rollings will still be good, but the texture and height will not be the same as those from the first cutting. 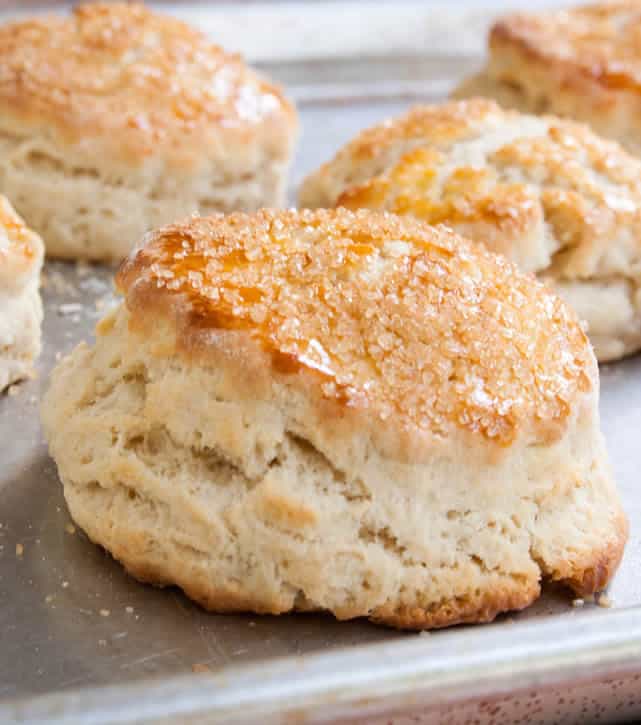 I brushed the tops with egg yolk and sprinkled generously with raw sugar.  The yolk gives it a bit of shine and helps it to bake up with a deep golden color.  The sugar adds a nice crunch for texture. When you split the shortcake open, you can see that the interior is more dense than fluffy, which means it won’t disintegrate when you pile on your toppings. 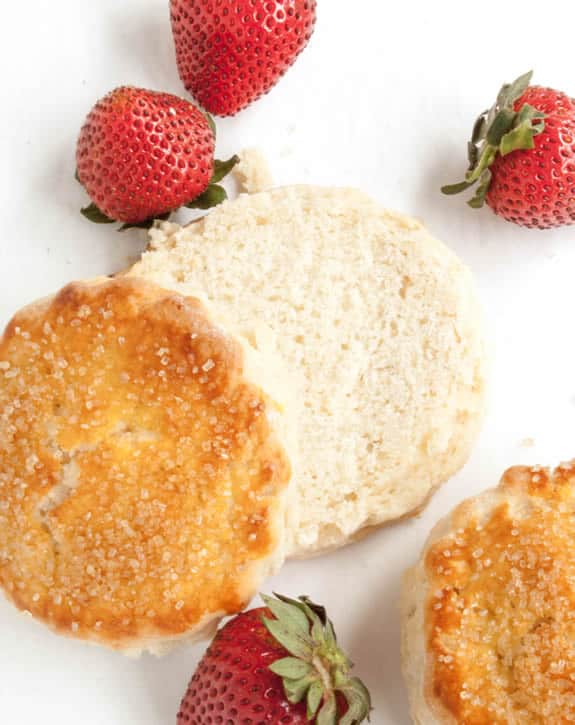 Eventually, I moved away from home and splitting strawberry shortcake with my mother at Kenny King’s continued as a tradition any time I was in town visiting.  It was our special little treat and sometimes we sat in our corner booth celebrating joyfully, sometimes we were there trying to solve the world’s (my) problems and sometimes she was there consoling a heartache.

She had an infinite capacity to listen, understand, discuss and solve. I could talk a subject into the ground and she would act like we had just started the conversation, fresh and new.

Today, Kenny King’s is gone and now I make strawberry shortcake at home to share with my family. It’s always a great time to share stories about my mom with my kids.

But I wish I could slide into that corner booth and order a shortcake for us to share. Because much like every other time we’d get together, 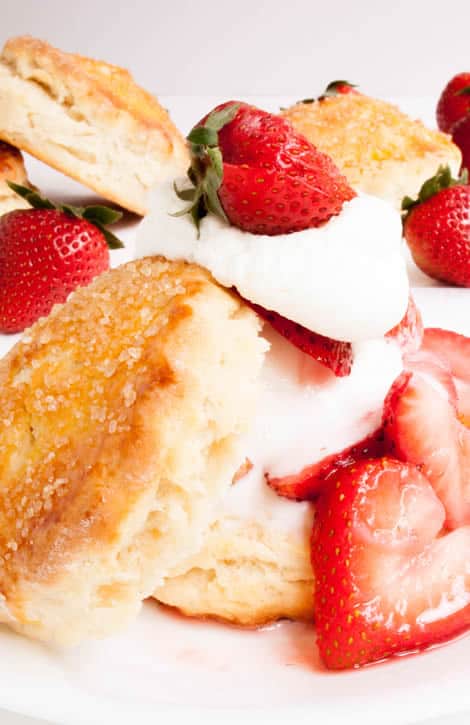 Strawberry Shortcake. A delicious biscuit based shortcake that's lightly sweetened and sturdy enough to stand up to juicy fruits and ice cream toppings.

For the whipped cream:

*I only add water to my strawberries if I don't have enough time for the sugar to draw out enough of the natural juice of the strawberries. For this recipe, I do like to add a bit of water because I like having the extra strawberry syrup to soak into the shortcakes.

Made these for a cookout this evening and they were a hit!! Thank you for sharing :)

Cassie, I'm happy to hear you enjoyed them! They're a favorite in our house :)

Wonderful recipe, and a beautifully touching story. Thank you.

i'm convinced that you've hit upon the ideal baked specimen for the perfect strawberry shortcake--bravo!