Have you tried making no churn ice cream yet? Yes? No? Then let this No Churn Nectarine Ice Cream be your gateway to the wonders of this creamy treat. 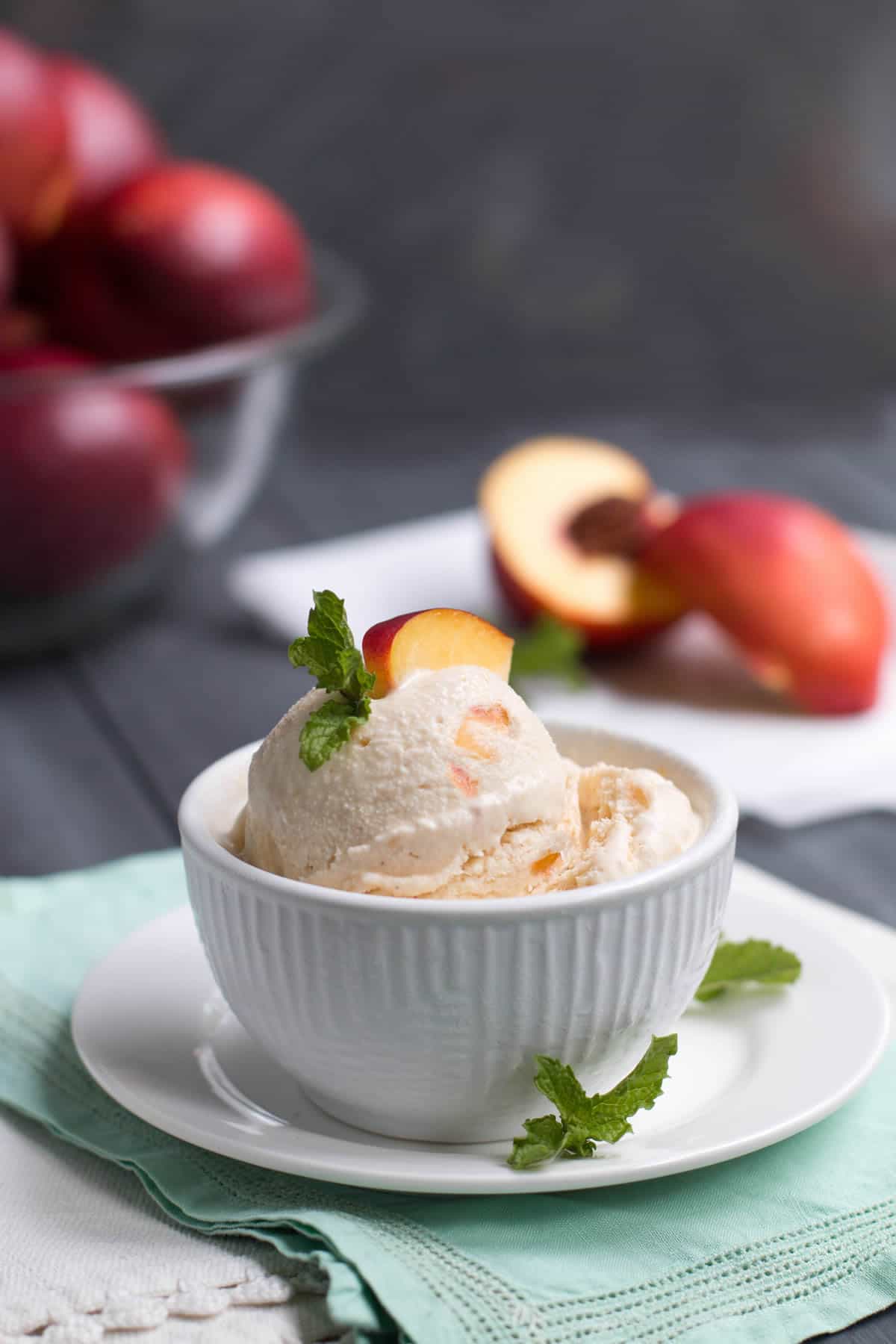 While traditional churned ice cream can be absolutely fabulous…like Seaport Salty Swirl Ice Cream or Ultimate S’mores Ice Cream, you might not want to invest in an ice cream maker to make it.  Or, maybe you just want the ease of a no churn ice cream.

I’ve already shared my No Churn Nutella Cheesecake Ice Cream. That recipe happened accidentally, while I was working on a completely different recipe. I was developing a whipped Nutella frosting but it collapsed.

We tasted it and it was divine! But it was soupy and could not be used as a frosting. Not wanting to waste it, I chucked it in the freezer and moved on to developing something else.

What happened? It froze into this really deliciously different treat! So then I worked on developing that recipe instead.

Today, however, I wanted to try out a completely different version of a no churn ice cream.

For those of you who don’t spend your days watching food trends develop on the web…no churn ice cream is basically just that…no churn. Because there’s no churning, you don’t need an ice cream maker.

That’s right. No special equipment at all…nada, nothing, zip.

Well, you do need a mixing bowl and an electric mixer, but not much more.  And if you can whip cream…well then, my friend, you’ve already mastered this process.

The base of this ice cream is simply whipped cream and sweetened condensed milk. After that, it’s all about flavoring your ice cream, whether you go with simple vanilla or all kinds of different flavors from fruity to chocolatey to just about any flavor you can imagine. 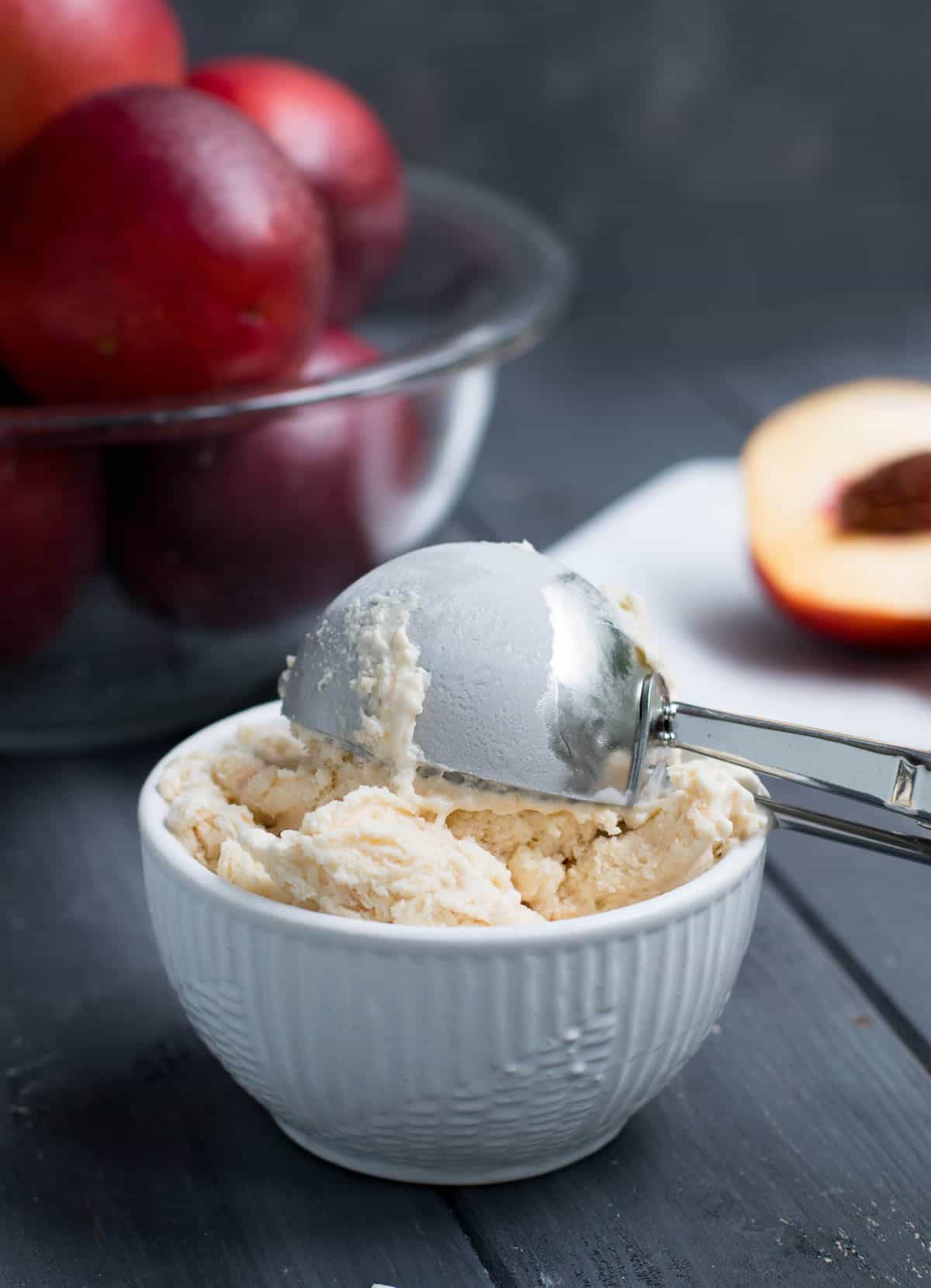 I decided to go with nectarine. After all…’tis the season, right? Not that anyone really says, “It’s nectarine season.” Peaches pretty much take the stage on that note. But never the less, both peaches and nectarines are in plentiful supply as we speak.

I do love peach season. I love nectarines equally. I buy what looks good, and I like to buy organic.

So, when there are cases of beautiful organic nectarines available. That’s what I get. If I had found peaches, you’d be reading about peach ice cream instead ;) Use whatever looks the best to you. 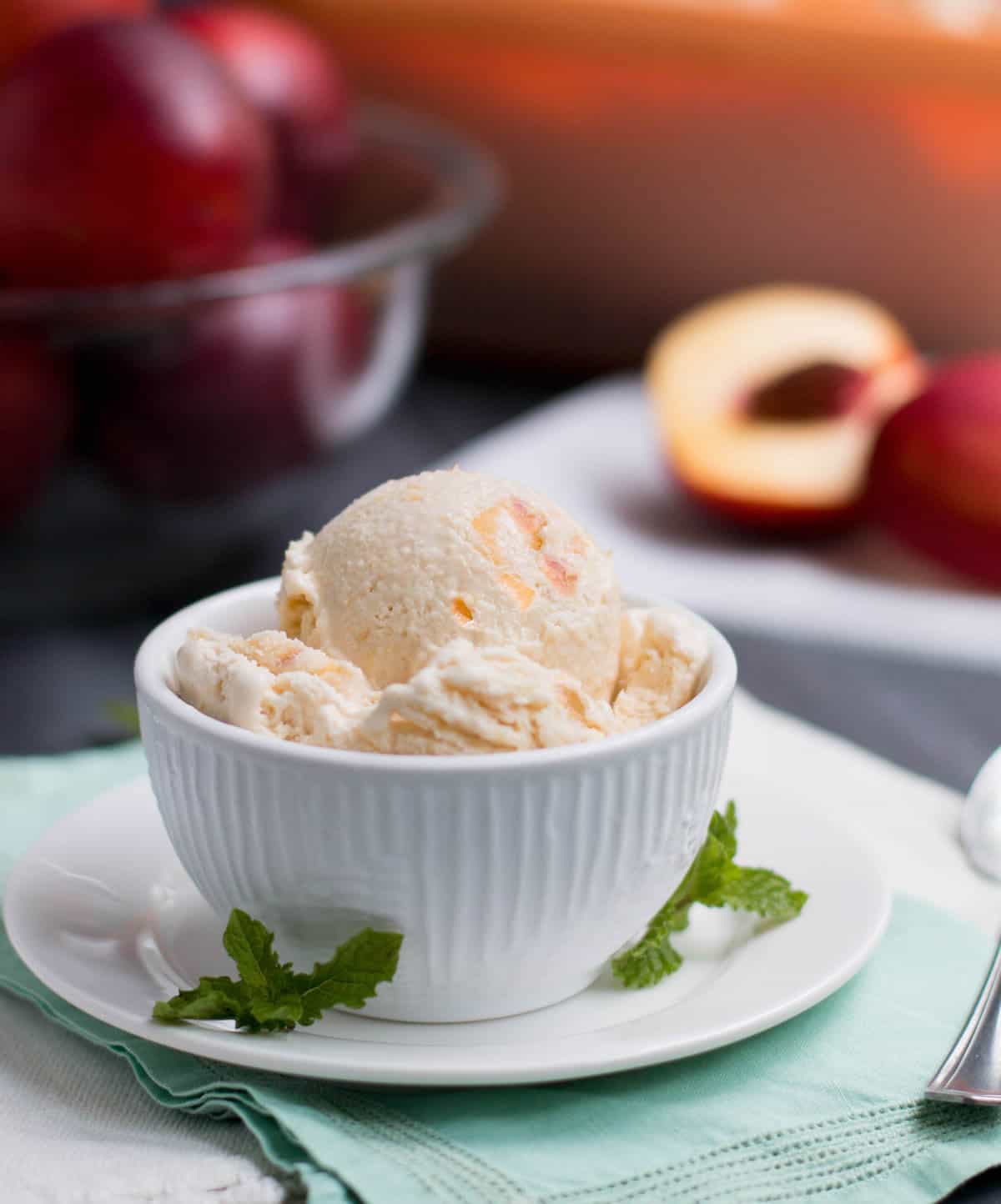 As long as they’re sweet and juicy…the kind you have to eat over the sink with the juice dripping down your arm…I’m in heaven. I make sure I buy enough to eat fresh…and enough to make some special treats like Georgia Peach Cobbler *swoon* or Fresh Peach Iced Tea.

You really do need to start with ripe nectarines. When they’re ripe, they’re sweet and juicy and full of flavor. If they’re not, you won’t get the full flavor infused throughout the ice cream. It will just taste like vanilla ice cream with crunchy fruit in it and that’s no fun.

When you work with nectarines for ice cream, you going to have to peel them. Peels just don’t work well in ice cream. So, to review…we don’t want crunchy, low flavor nectarines and we don’t want the peels.

Now I’ll admit that the thought of peeling nectarines is never a happy one. I always feel like it’s going to be a big chore that I’m going to hate. 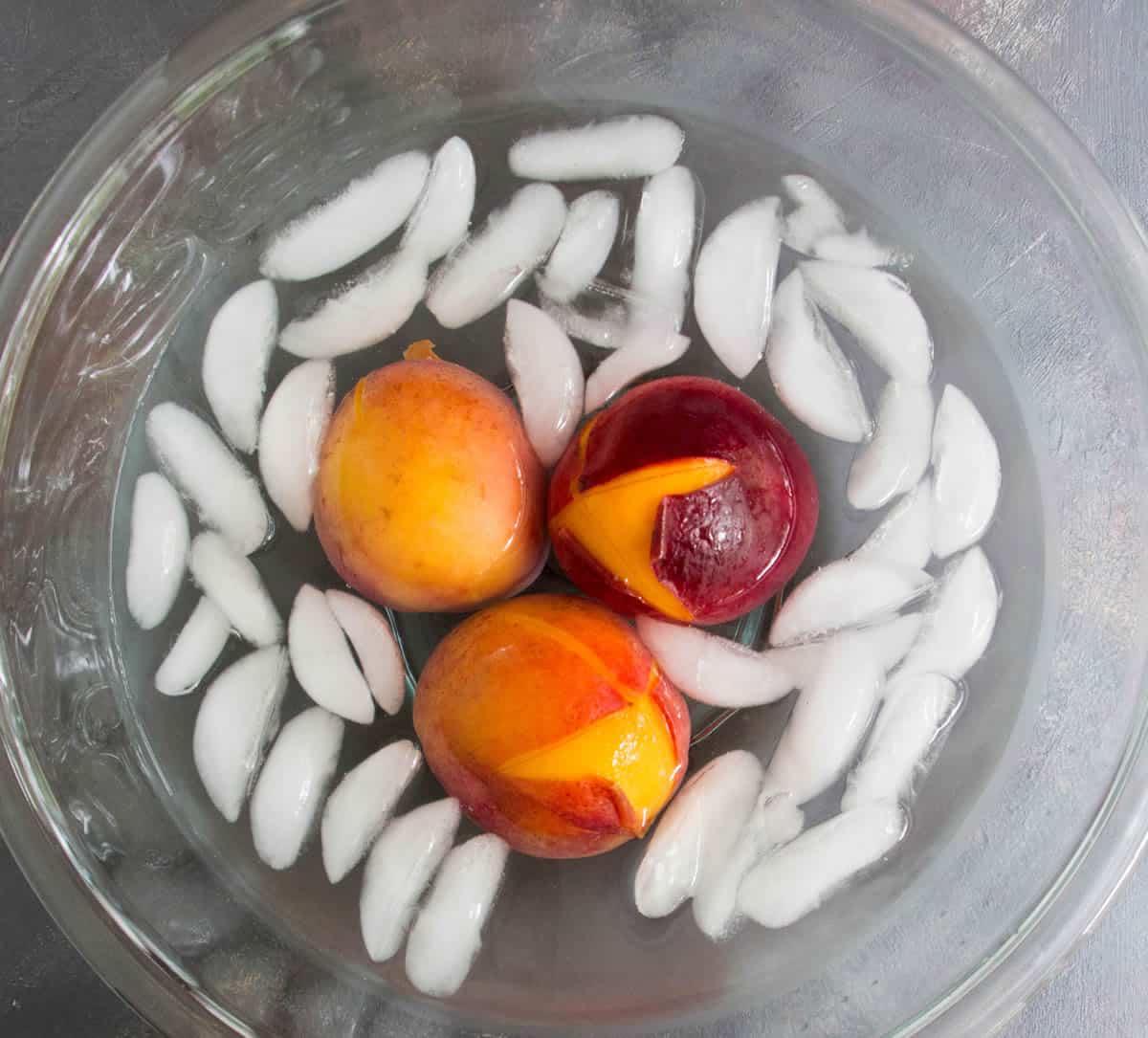 But in reality, it’s always faster and easier than I remember and that’s having done it many times. So if you haven’t done it before, you’re just going to have to trust me. It’s no big deal. It’s even kind of fun…like a little science experiment happening right before your eyes 😊

Boil a pot of water. Fill a bowl with ice water. Score your nectarines with a shallow “X” on one end.

Place the nectarines in the boiling water for about 20-30 seconds. We’re not cooking them, we’re just blanching them. Shortly after you put them into the boiling water, you’ll see the peel shrinking back from the “X.”

Use a slotted spoon to remove them from the boiling water and place them into the cold ice bath. They’ll look like fruity tulips 😊

All you have to do now is grab one of the “petals” and peel the skin off. If you started with ripe nectarines, the skin should peel off easily.

You now have the fruit equivalent of a greased pig. Peeled nectarines are slippery and you’re going to need to cut them. Two words of advice…Safety first! 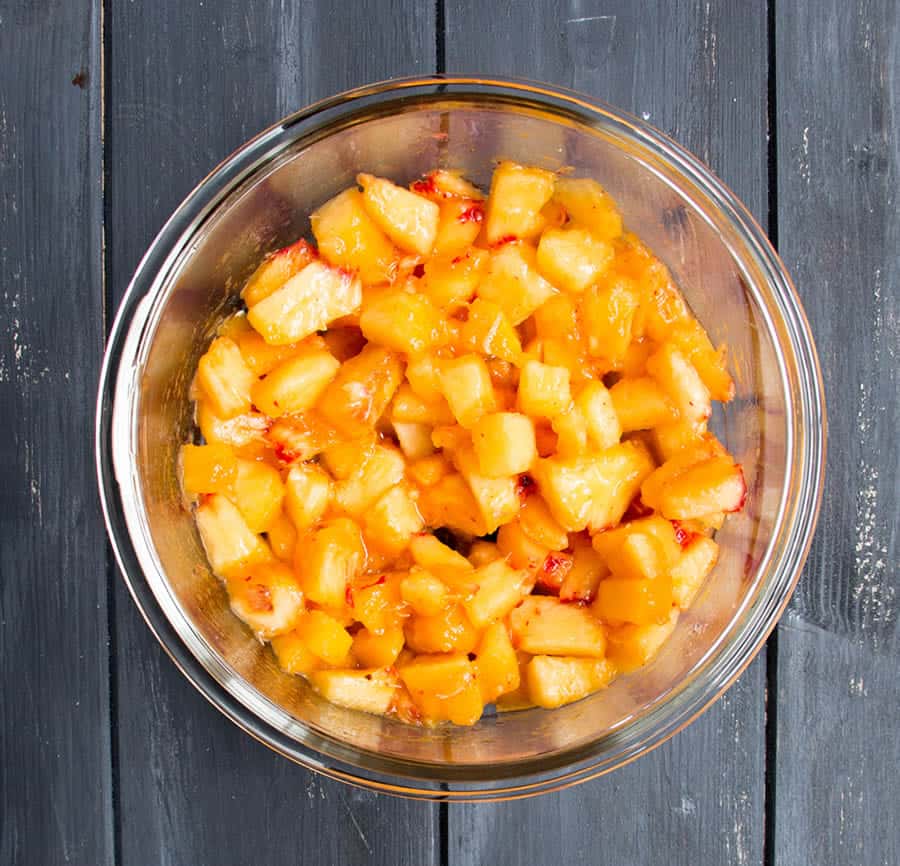 At this stage, to avoid any knife accidents, I nestle them, one at time, into a dish towel. This gives me some traction to hold the fruit.

I then make a cut all the way around the nectarine, always keeping my hands in a position so that if the knife slips, or the fruit slips, it doesn’t slip into my hand. Then I simply use my thumbs to separate the halves and remove the pits.

Once the fruit has been separated in halves, you can place them flat side down on the cutting board and dice them up.

To make sure we get a double dose of nectarine flavor, I used the fruit in two ways: pureed to flavor the base and diced as an add-in.

To add the flavor to the base ice cream, all we’re going to do is take two of the nectarines and puree them with the sweetened condensed milk. You can do this in a food processor or blender. I used my mini food processor (because it’s the easiest one to clean.)

Then, in a mixing bowl, whip the heavy cream to stiff peaks. Don’t over beat it or you’ll end up with butter. Add the pureed nectarines and fold everything together.

At this point, you might have a fairly loose mixture. This is because I pureed the fruit with the sweetened condensed milk. If you add your diced nectarines now, they’ll all sink to the bottom.

You can test this by adding a spoonful of diced nectarines into the center of your mixture.

If they sink, you need to put your mixing bowl into the freezer until there’s enough stability to stir the nectarines in without sinking. You want pieces of fruit throughout your ice cream, not just on the bottom.

Once you’ve got everything mixed in, pour the mixture into a freezer safe container. You can use a loaf pan or something that has some depth to it. I have two Tovolo containers that I love, but you can use what you have. (If using a baking pan, I like to line it with plastic wrap first.)

Then just freeze it. When it’s done, you’ll have super creamy No Churn Nectarine Ice Cream. And the only thing left for you to do is fill your bowl… 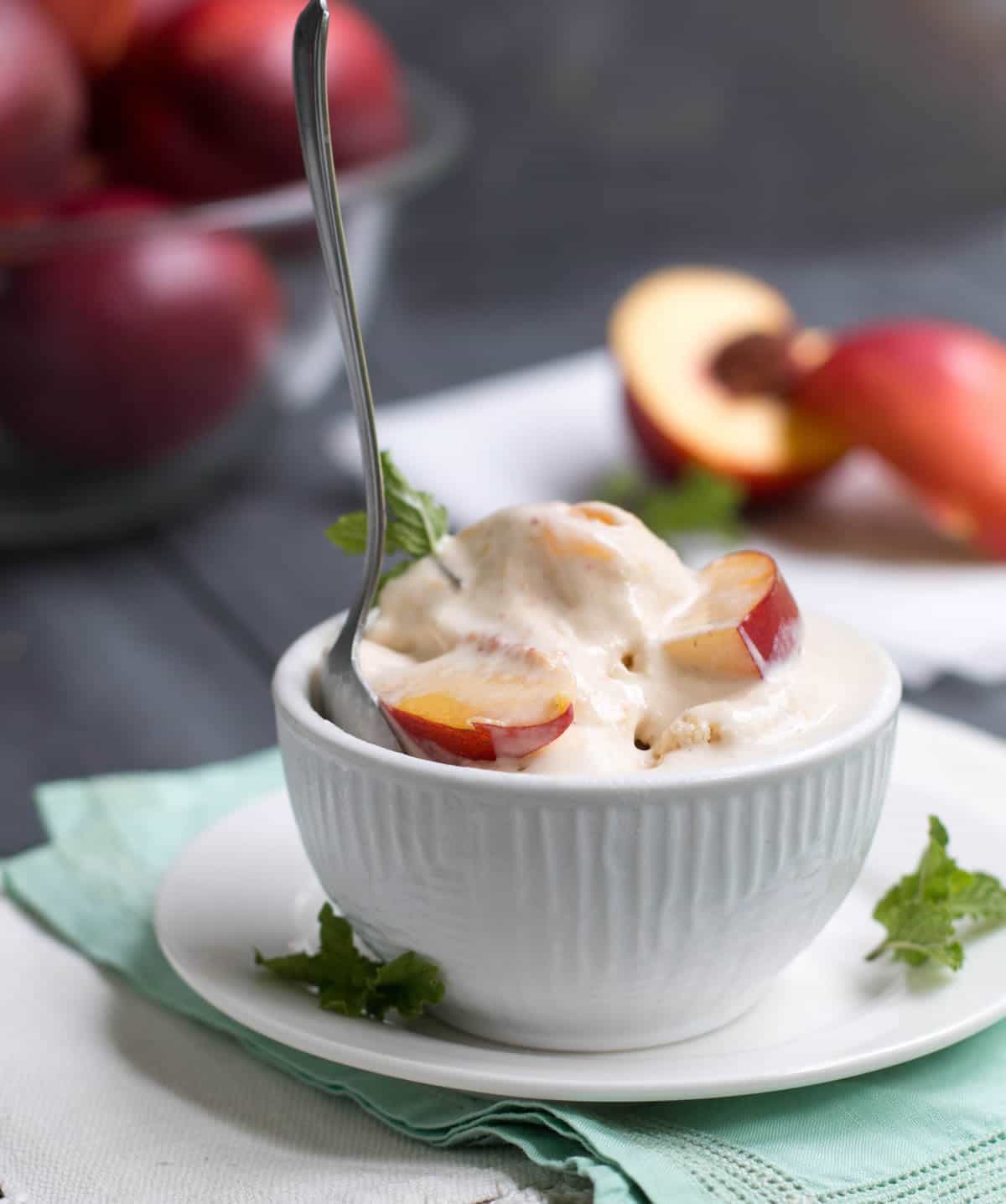 and eat it before it melts!

*To easily peel nectarines, cut a shallow "X" on the end of each piece of fruit. Place nectarine in a pot of boiling water for about 30 seconds. Remove from boiling water and place in a bowl of ice water for a few second to cool down. Then remove from ice bath and peel by simply pulling the skin off. Skin should peel off easily.

*Take extra care once your nectarines are peeled. They'll be very slippery. Use a dish towel or paper towels to keep them from slipping as you cut them. See blog post for more details on this.

*My nectarines were medium in size. *Check the volume of your container. This recipe make more than a quart so you may have to use more than one container.

*I always place a piece of plastic wrap directly on the surface of the ice cream while storing to protect it from air and the dreaded freezer burn.

*The recipe did not fit into my 1 1/2 quart ice cream container. I used a small second container to store the excess.

Looks like summer in a bowl! Anxious to make this!

Mary, it's so easy and creates a rich and creamy summer treat :)