I have been debating sharing this No Churn Nutella Cheesecake Ice Cream with you for weeks. 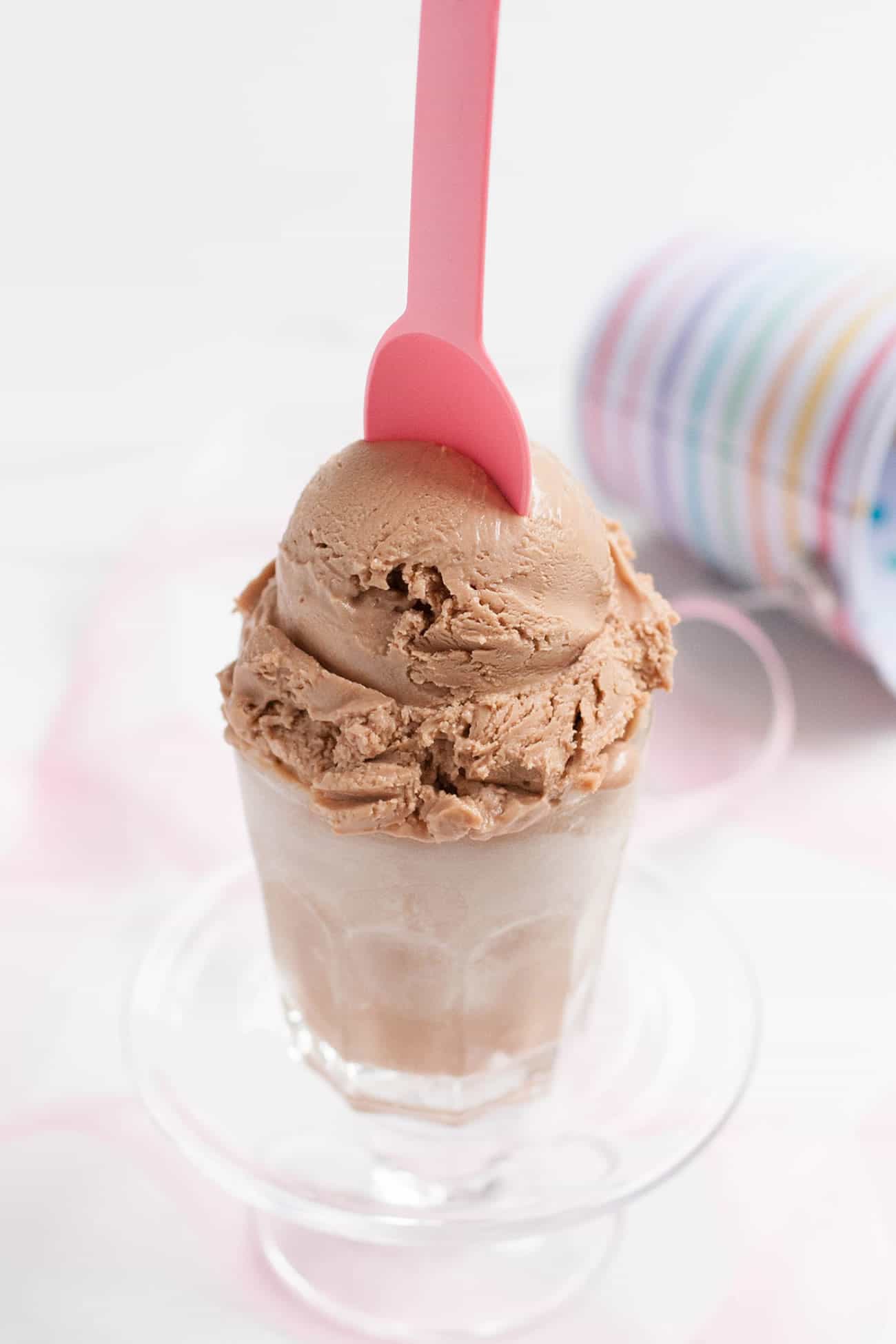 As a no churn ice cream, I’m not even sure it’s really truly an ice cream. No churn ice creams have been very popular for the past couple of years. They basically have whipped cream, sweetened condensed milk and then flavorings. There’s no churning. Just whipping up and freezing.

I’ve never tried any of them. I don’t know why exactly. Maybe because I have an ice cream maker and have made some ridiculously delicious ice creams with it like Seaport Salty Swirl and Ultimate S’mores Ice Cream. (My husband says the S’mores ice cream is absolutely, positively, the very best ice cream he’s ever had.) 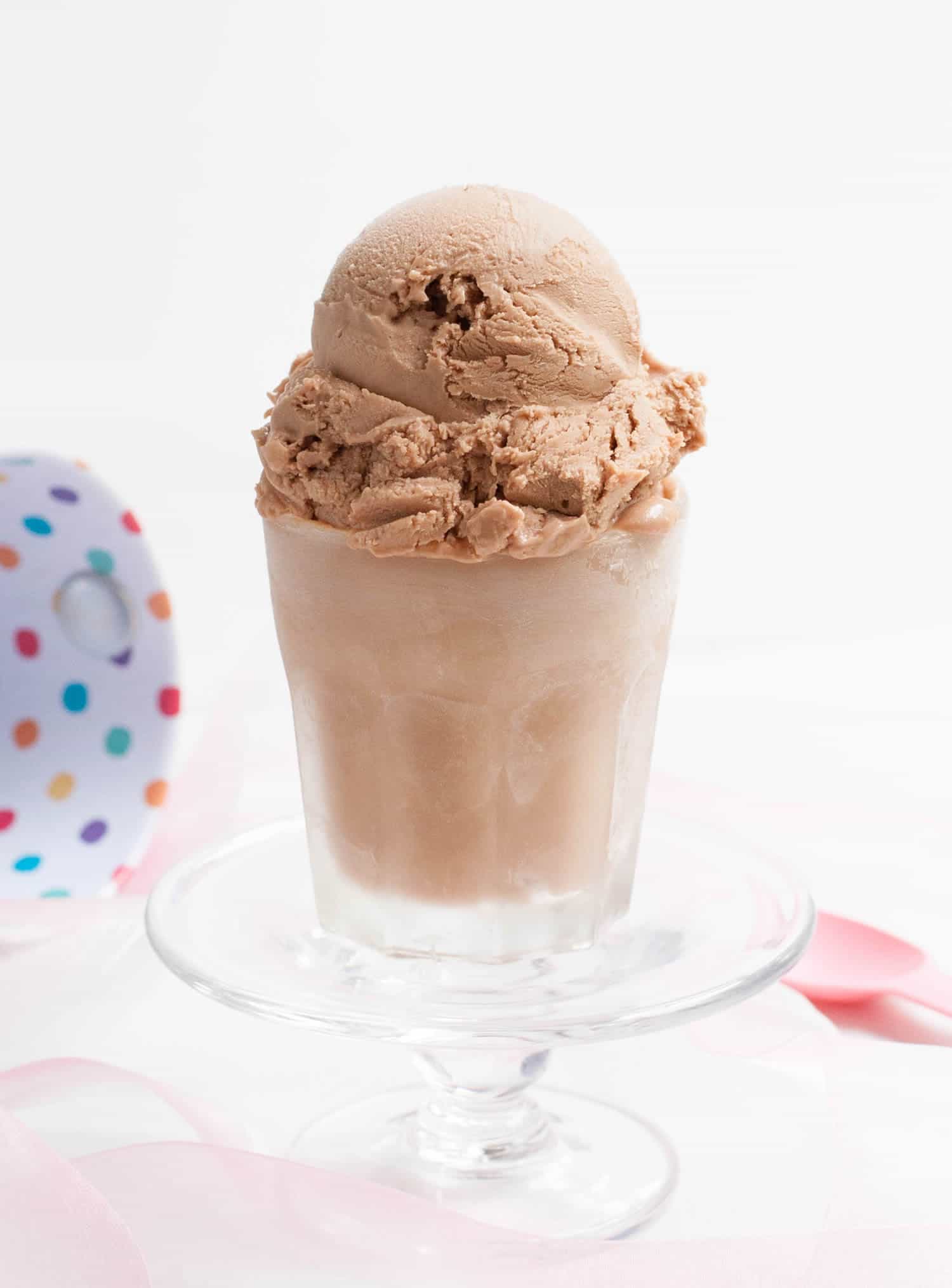 Actually, I kind of gave up on ice cream making a long time ago. I had tried a lot of recipes and I wasn’t thrilled with them. So, I stashed my ice cream maker in the basement and there it stayed until I was inspired to try again and hit the jackpot on those two amazing flavors. Those recipes rocked my ice cream making world and pulled me right back into the fold.

This whole idea of no churn ice cream is actually pretty amazing and the results are quite impressive. It levels the playing field for all of you who don’t have ice cream makers and have no desire to own one.

But it’s also great for all of you who do have ice cream makers but would like to try whipping up a quick batch of something new.

Today’s ice cream was a complete accident. I hadn’t planned on creating a no churn ice cream. I was simply experimenting with my favorite Whipped Cream Cream Cheese Frosting. I was working on ratios for the chocolate version, when I decided to see how adding Nutella to the mixture would work. 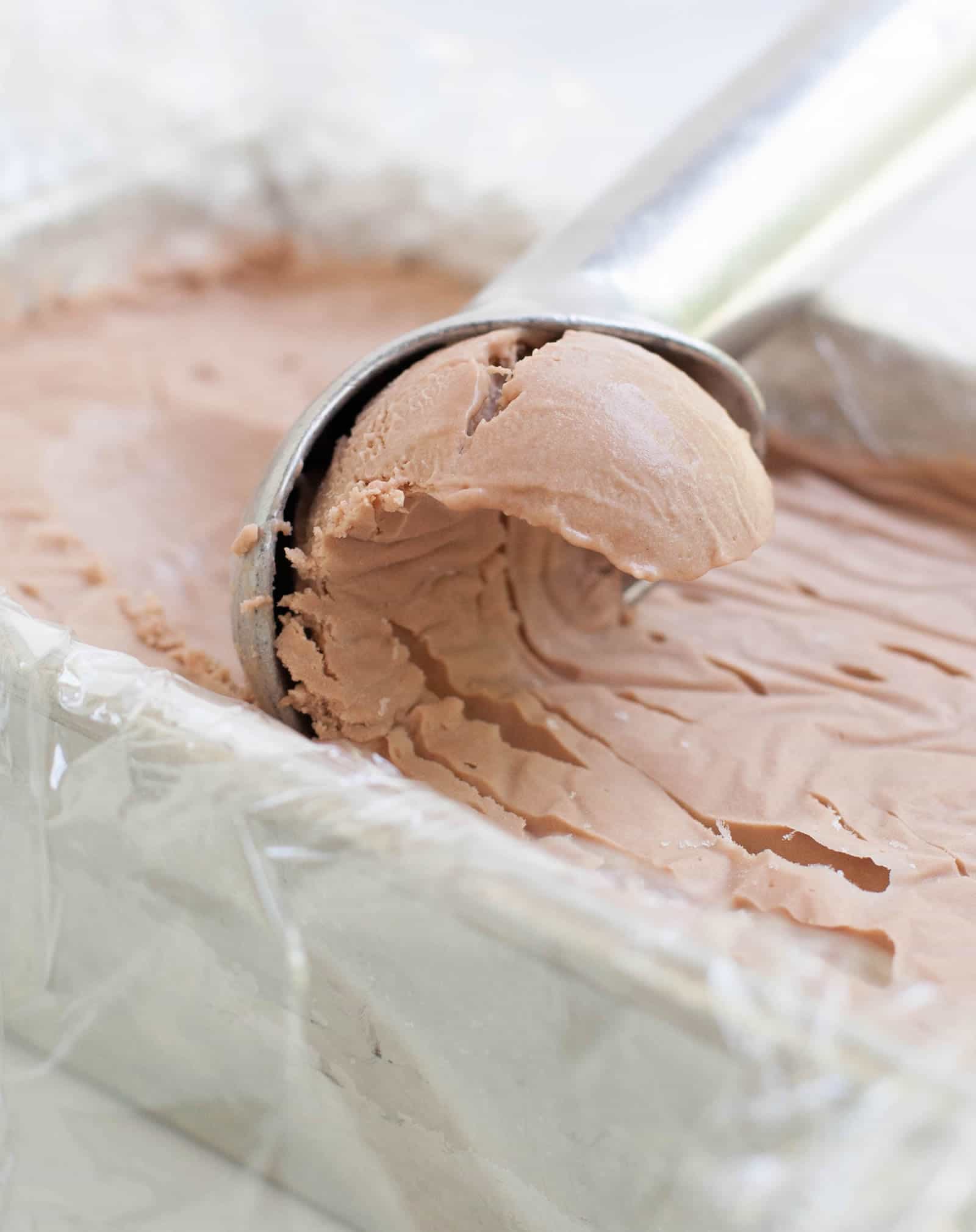 I whipped it all up and tasted it…It was divine! Divine in a way I hadn’t imagined. It was creamy and kind of malty and all kinds of amazing! But, it wasn’t going to work for me as a frosting. It was too soft. It would have slid off the cake. It tasted too good to toss out, so I froze it to see what would happen.

Once it was thoroughly frozen, I took the container out of the freezer and we each grabbed a spoon to take a taste. Our eyes lit up. Our mouths said, “Mmmm!” Once frozen, it had turned into the richest, creamiest ice cream.

It was so good. But it was rich. I imagine the other “no churns” are equally as rich since they are basically frozen whipped cream with sweetened condensed milk.

This one is like frozen Nutella cheesecake or maybe like a frozen mousse. I struggled with whether or not I should call it, “Ice Cream.” My husband defended the title, because after all, it is frozen cream in every sense of the word, no? 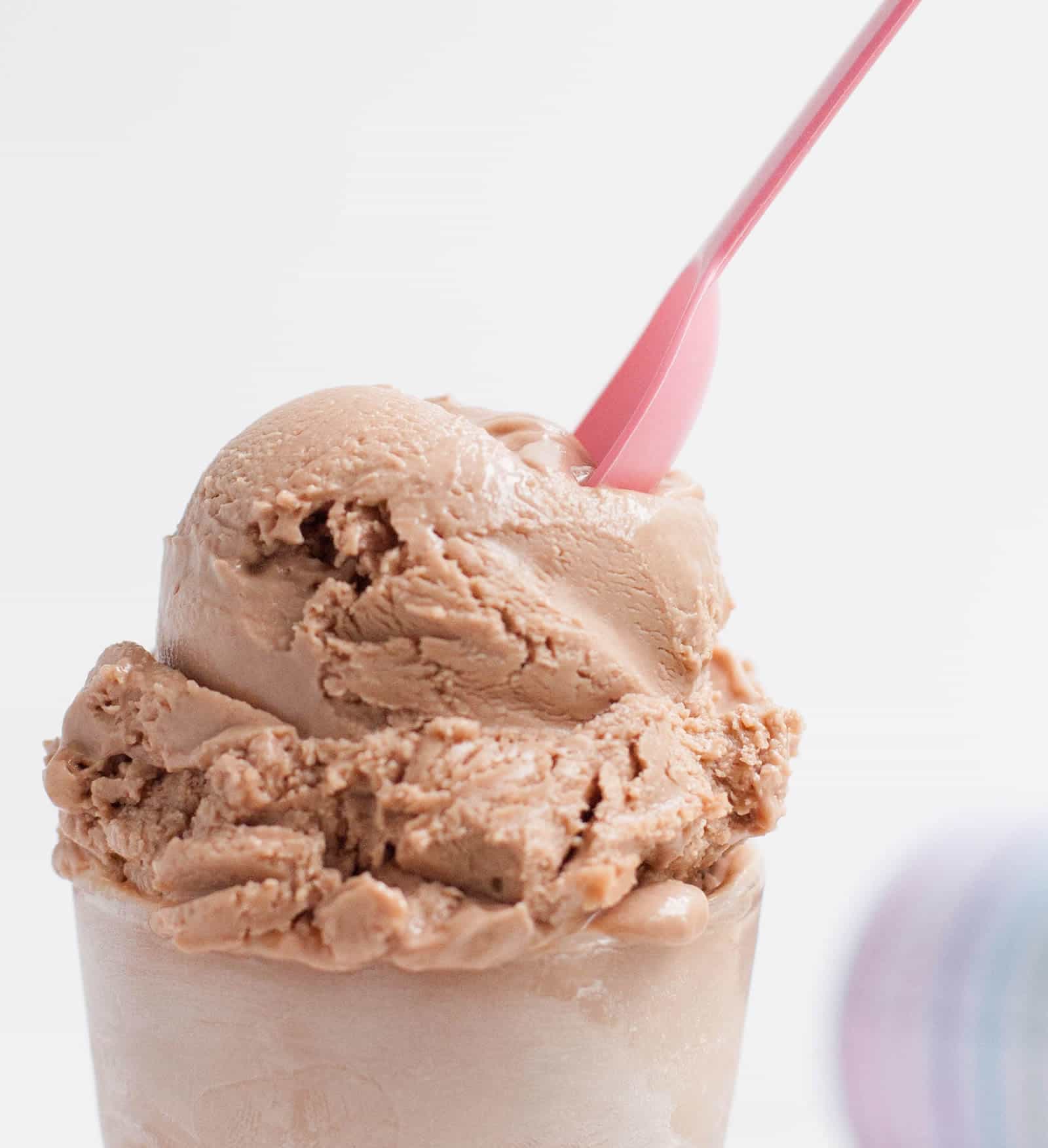 Now, even though I show a nice hearty scoop in these photos, I don’t think this is the kind of ice cream you could splurge on with that kind of quantity. This is the ice cream that really works best as a small scoop. That might be a good thing. You know, a portion control thing. A little bit satisfies.

So, it’s like diet ice cream, in a way ;) You know, in that kind of way that no nutritionist would ever support. Or maybe they would. Everything in moderation, right?

I was visiting my sister last week and we had family over for dinner. I was in charge of dessert and made Crazy Chocolate Olive Oil Cake and this No Churn Nutella Cheesecake Ice Cream. Both were super easy desserts to make; they were perfect for making something delicious but fast, especially since I wasn’t working in my own familiar kitchen.

We served the cake with two tiny scoops of ice cream, just enough to add something fun to the cake, but certainly not a giant a la mode scoop. Everyone enjoyed both the cake and the ice cream.

I heard ice cream comments like, “Wow, this is soooo creamy!” and “This is delicious! What’s in it again?” “Oh yes, I can taste the cheesecake!” 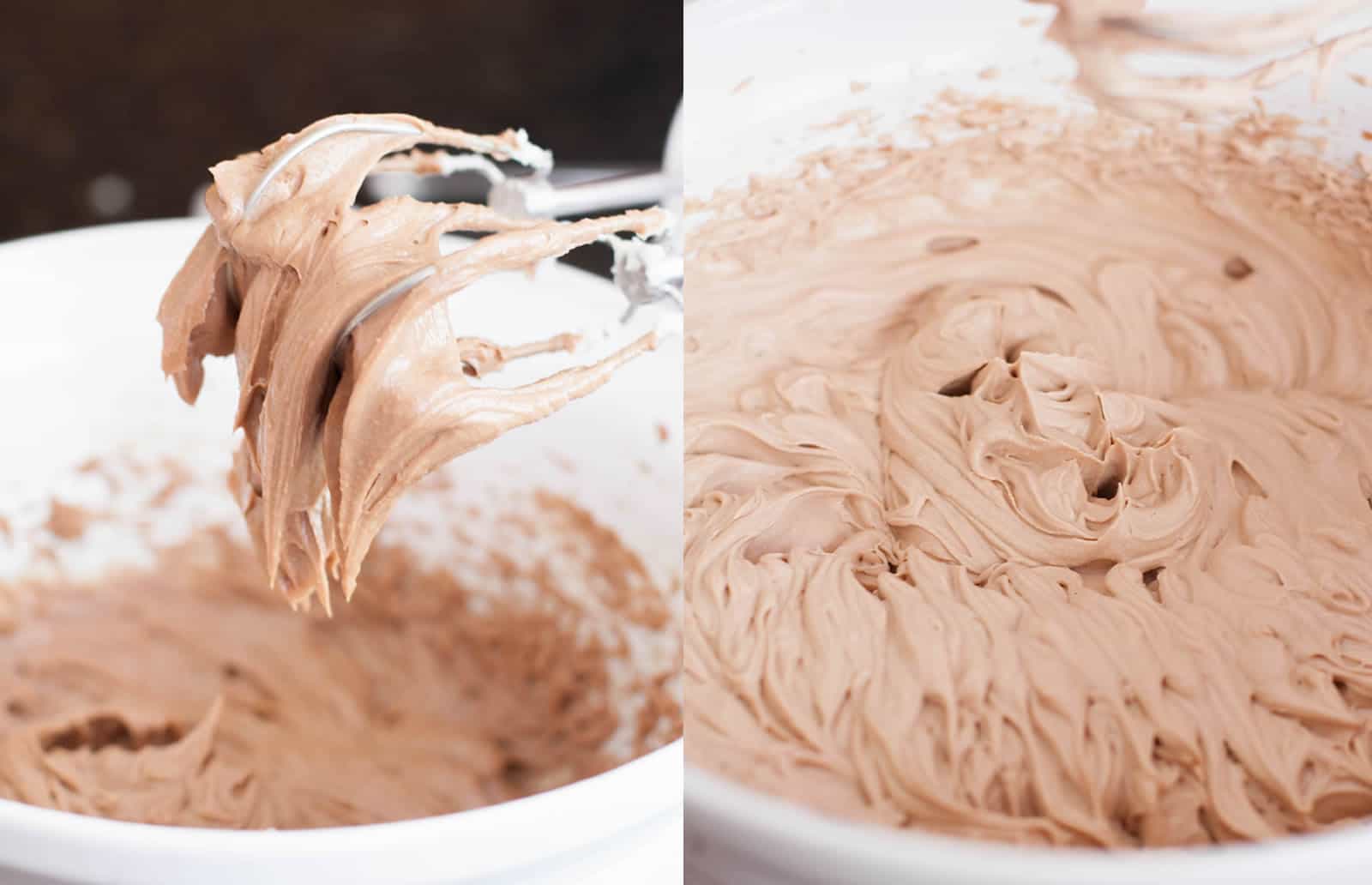 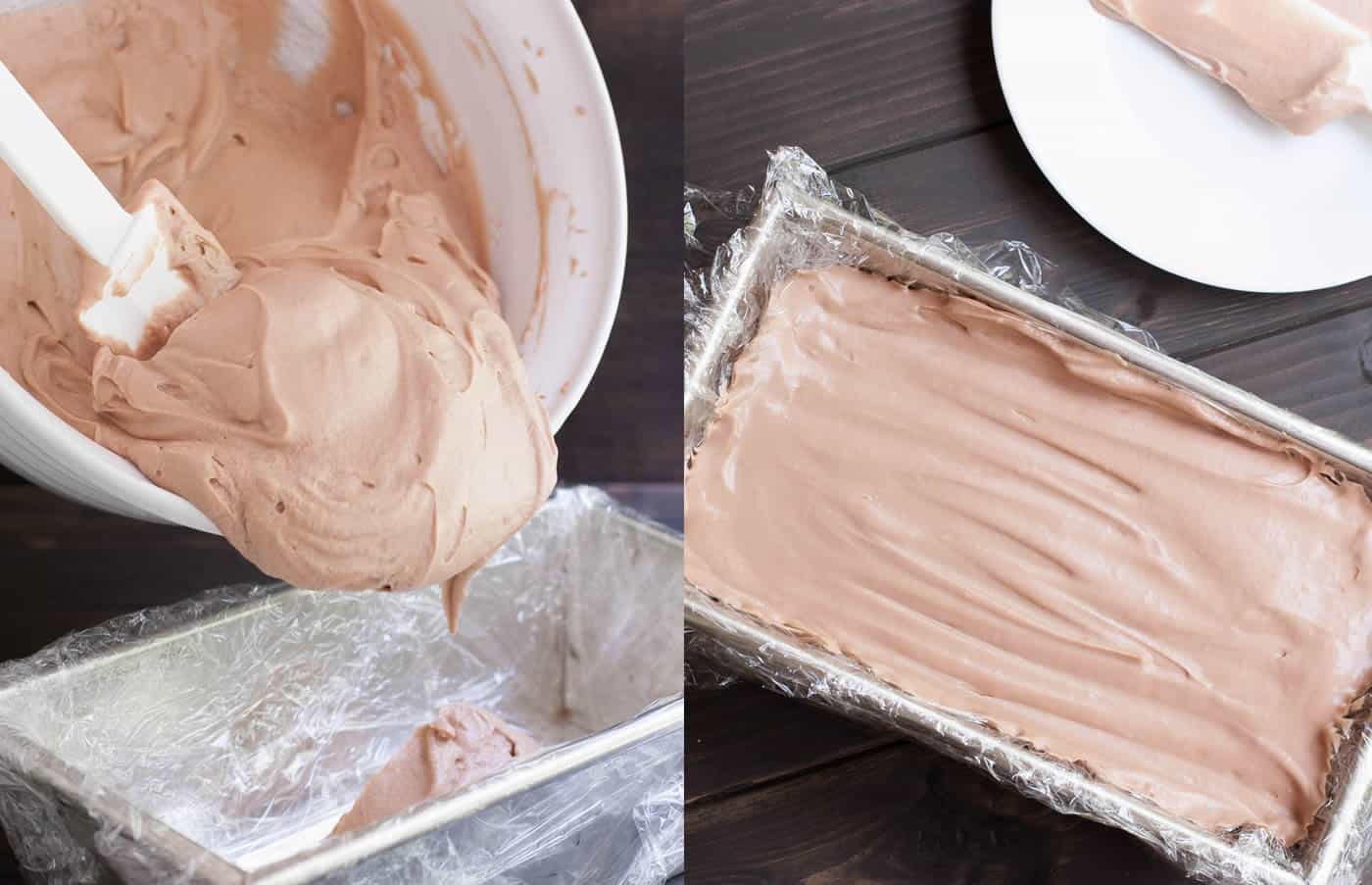 You’ll whip it all up in one bowl. You’ll pick a container to freeze it in. You’ll freeze it and shazam! Ice cream! It freezes like ice cream, but doesn’t seem to get rock hard. 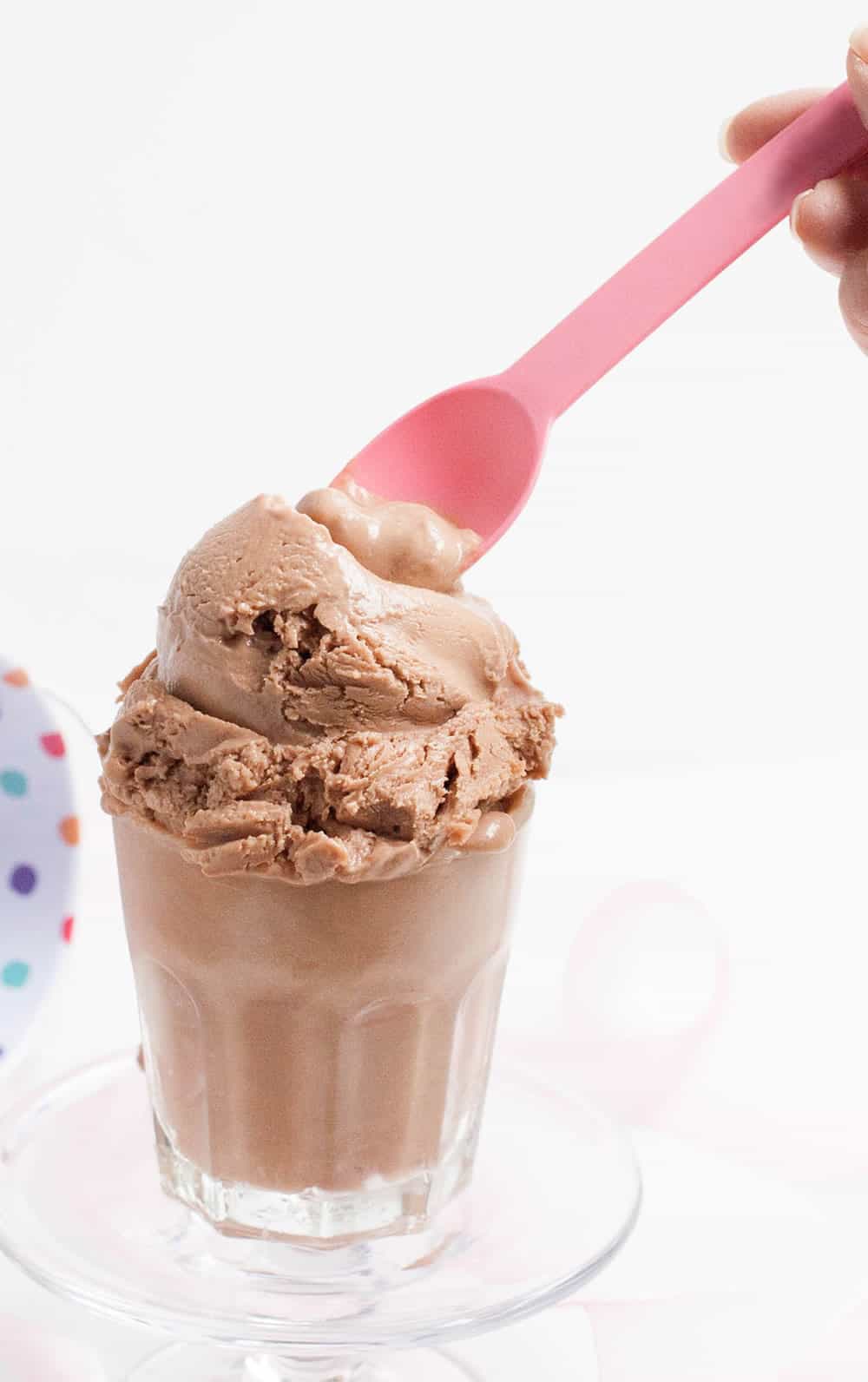 I have all kinds of ideas of how to use this delicious new ice cream and lots of experimentation to see how different kinds of milk might work. I’d also like to play around with lightening it up some…just for kicks. 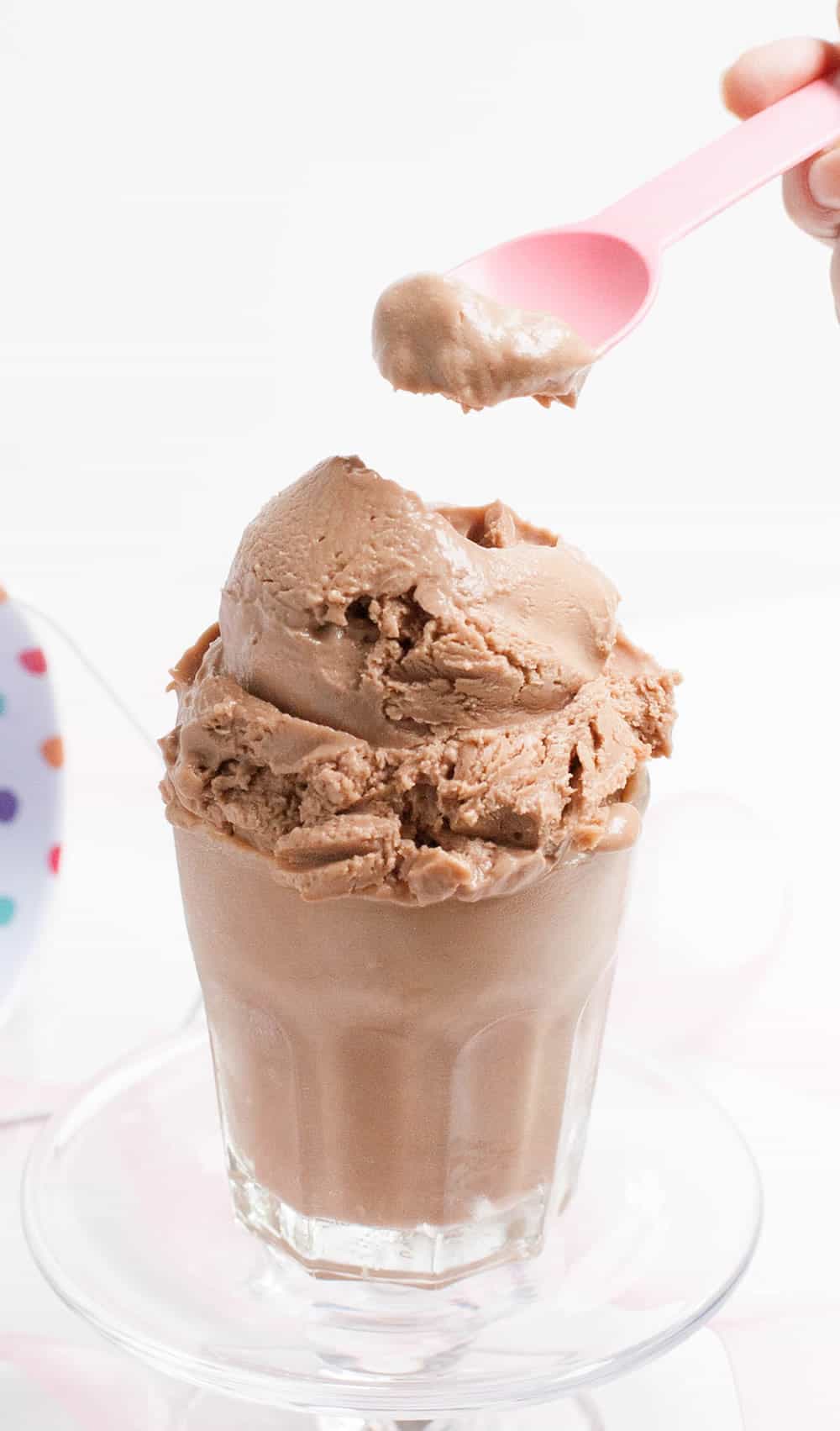 So I wasn’t sure if I should share this new discovery with you or not. Is it too creamy? Is it too rich? The flavor is certainly stop in your tracks delicious. It’s definitely for those of you who appreciate a super creamy full fat ice cream.

I made a batch before we went out of town and shot it when we got home a couple of days ago. Last night, after dinner, I gave everyone a small scoop. Again, I heard, “Oh my gosh, mom! This stuff is soooooo good!” 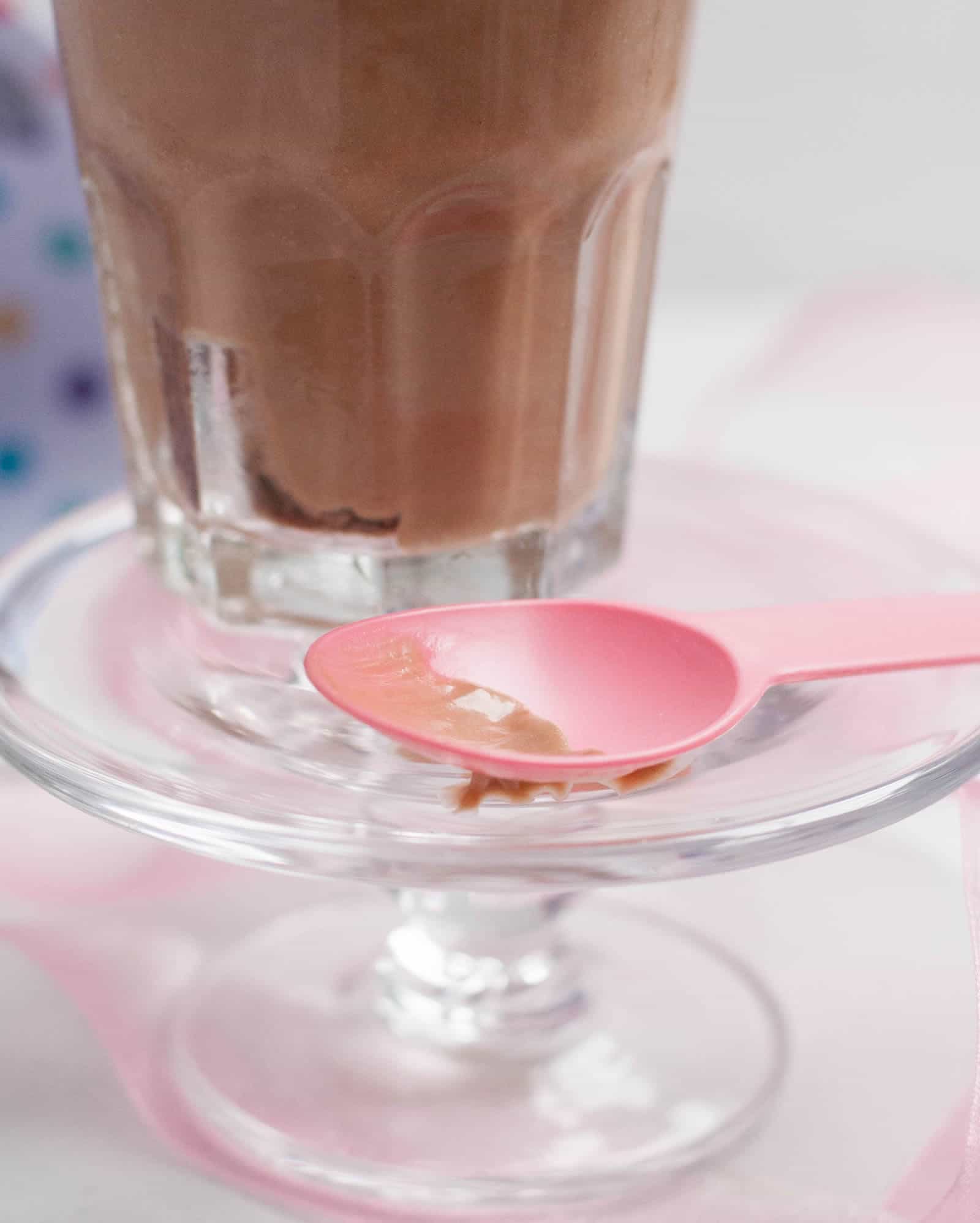 One bowl and a mixer, a few minutes to whip it all up. Oh, and a container to freeze it in, and boom! You have creamy, rich and delicious No Churn Nutella Cheesecake Ice Cream.  So, as you can see, I decided to share it. I mean, come on…look at it! 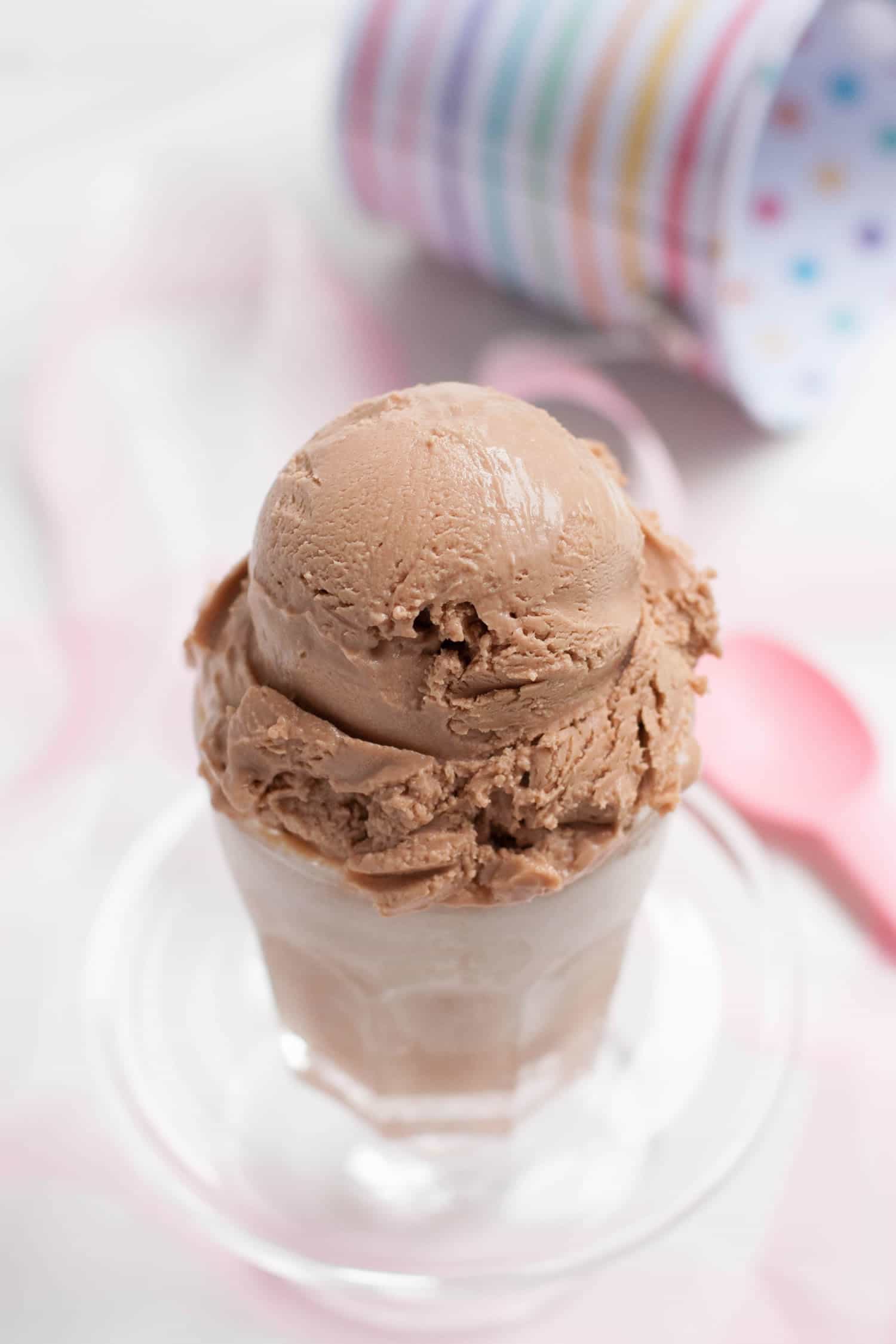 How could I not?

* I love my stand mixer, but I prefer using a hand mixer for this recipe.

*I used 3/4 cup of sugar both times I made the recipe. The Nutella also adds sweetness, so I may try reducing the sugar to 1/2 or 2/3 cup next time to see how we like it. Recipe based on Whipped Cream Cream Cheese Frosting