For all of my passionate fans of baked oatmeal, have I got a delicious new version for you! Blueberry Pie Baked Oatmeal! That’s right…PIE! On top of oatmeal! Seriously, what could be better? 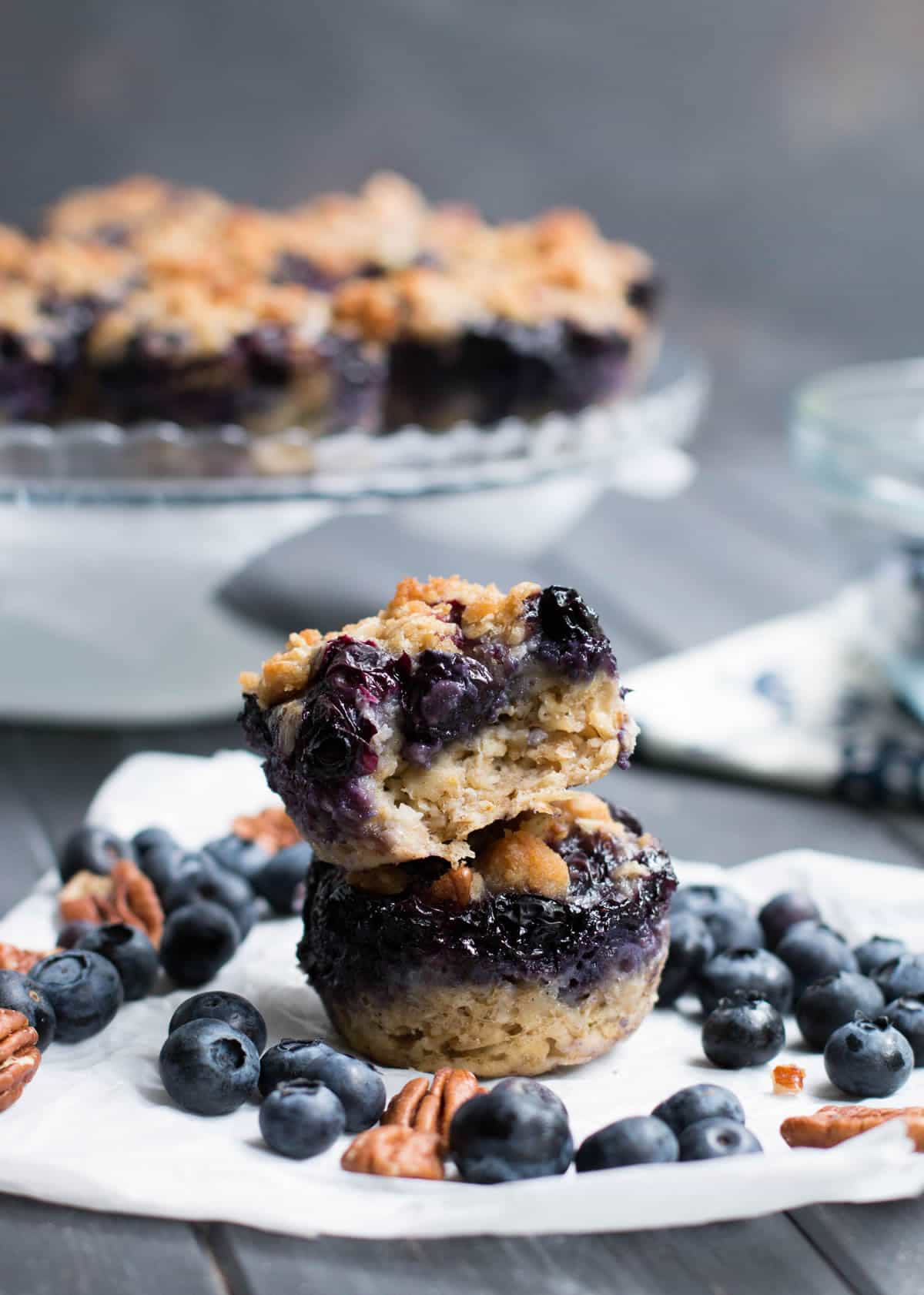 I know there are thousands of you who love baked oatmeal based on the response that I’ve gotten to my Baked Banana Oatmeal Cups. Baked oatmeal is wonderful hearty breakfast that’s full of fiber.

Even though this Blueberry Pie Baked Oatmeal looks like muffins, it does not have the texture of muffins. It really is like oatmeal that has been baked instead of cooked on the stove top.

Because of some extra ingredients though, it’s not quite as dense as straight oatmeal. Eggs and olive oil and baking powder help to lighten up the texture a bit. 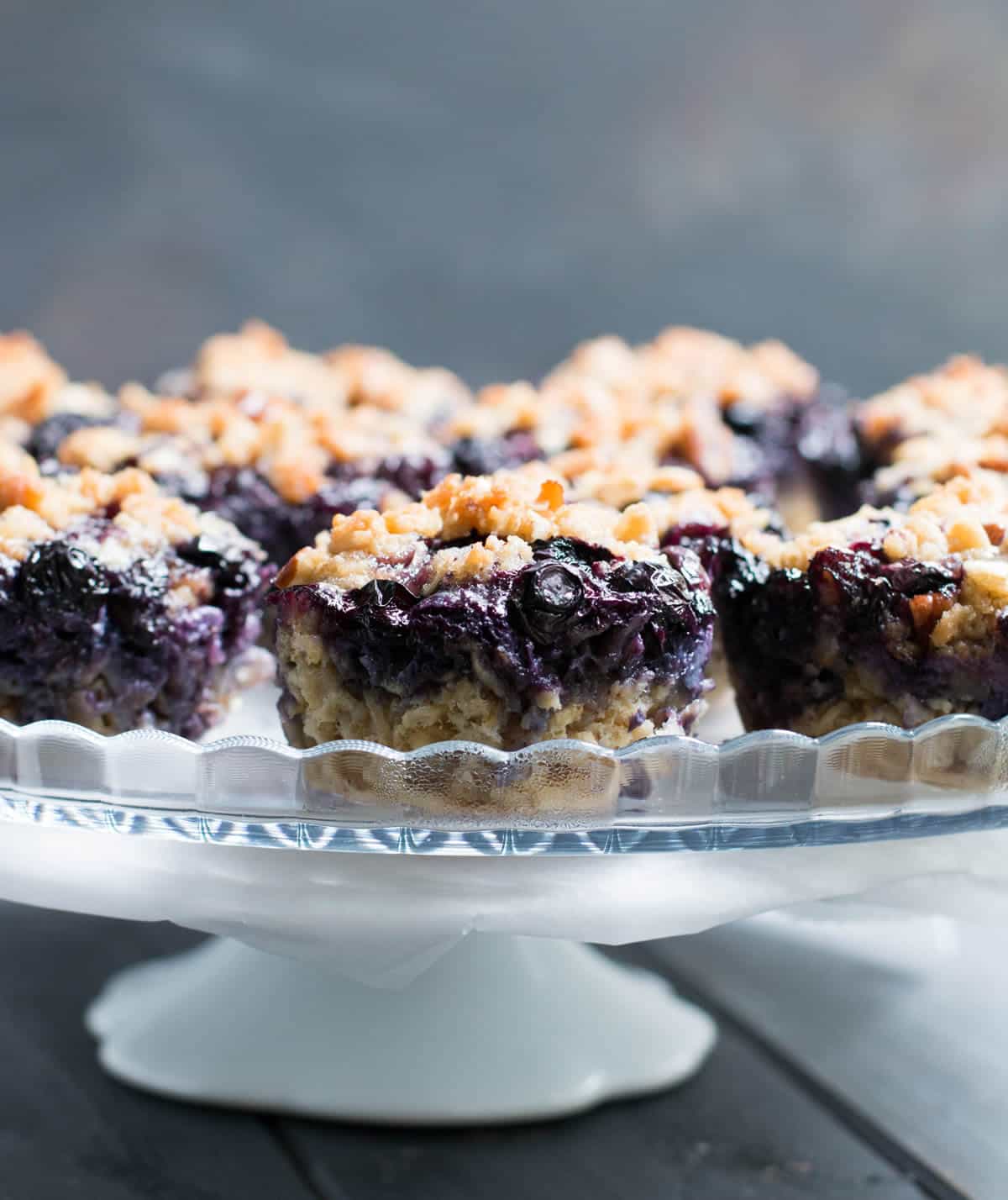 In addition to my Baked Banana Oatmeal Cups, I have a Pumpkin Spice version and a Carrot Cake version (with cream cheese!!!) I figured what the heck? I need a pie version!

You know how I’ve been waiting for months for gorgeous organic blueberries to finally show up in plentiful supply? They’re finally here! I couldn’t be more excited! And yes, I’m buying pounds and pounds of them.

I did post a few blueberry recipes earlier this year, but honestly, it was a challenge to find berries like I have today. Sweet, plump, organic blueberries. Some of them are so large they look like grapes! 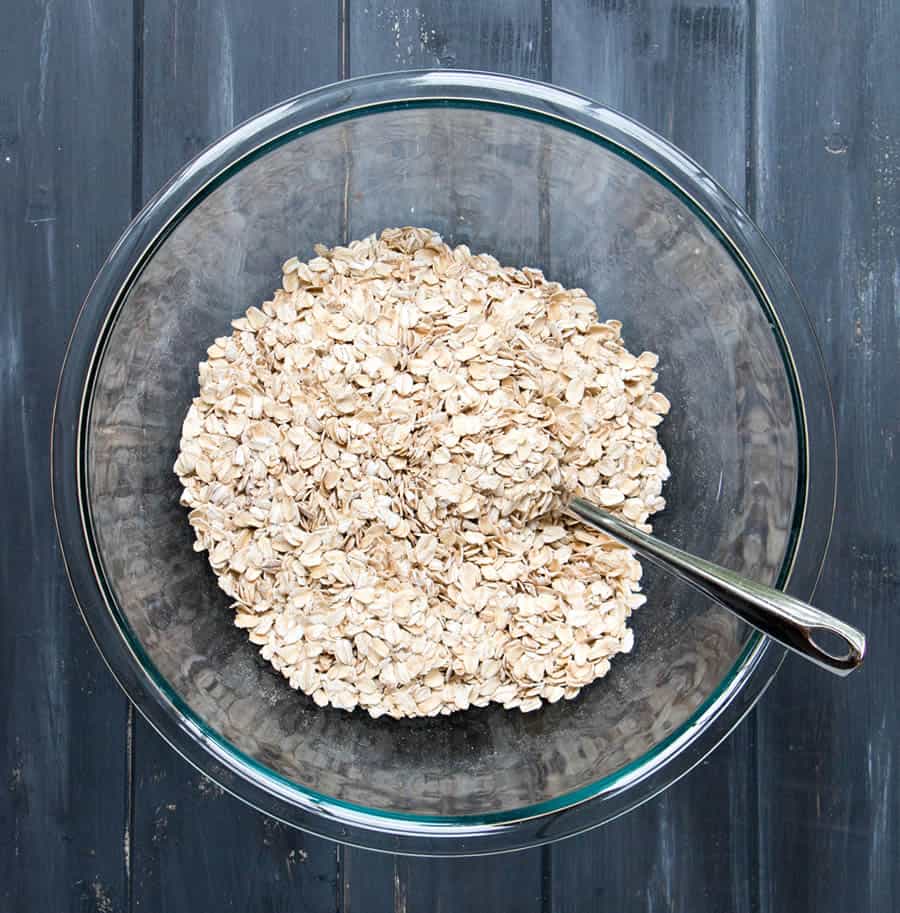 I’ve actually had this pie idea for awhile now, but I ran into a few recipe fails with it and set the idea aside for a total redo. Once I had a refrigerator full of blueberries staring me in the face, I thought it was time to tackle the idea again.

I must have learned some lessons during those early trials, because my first try this time was a success! It all had to do with balancing moisture.

If you have too much moisture, then the berries get absorbed into the oatmeal mixture. This time, I reduced the liquid and ended up with a more stable base for my fruity topping. 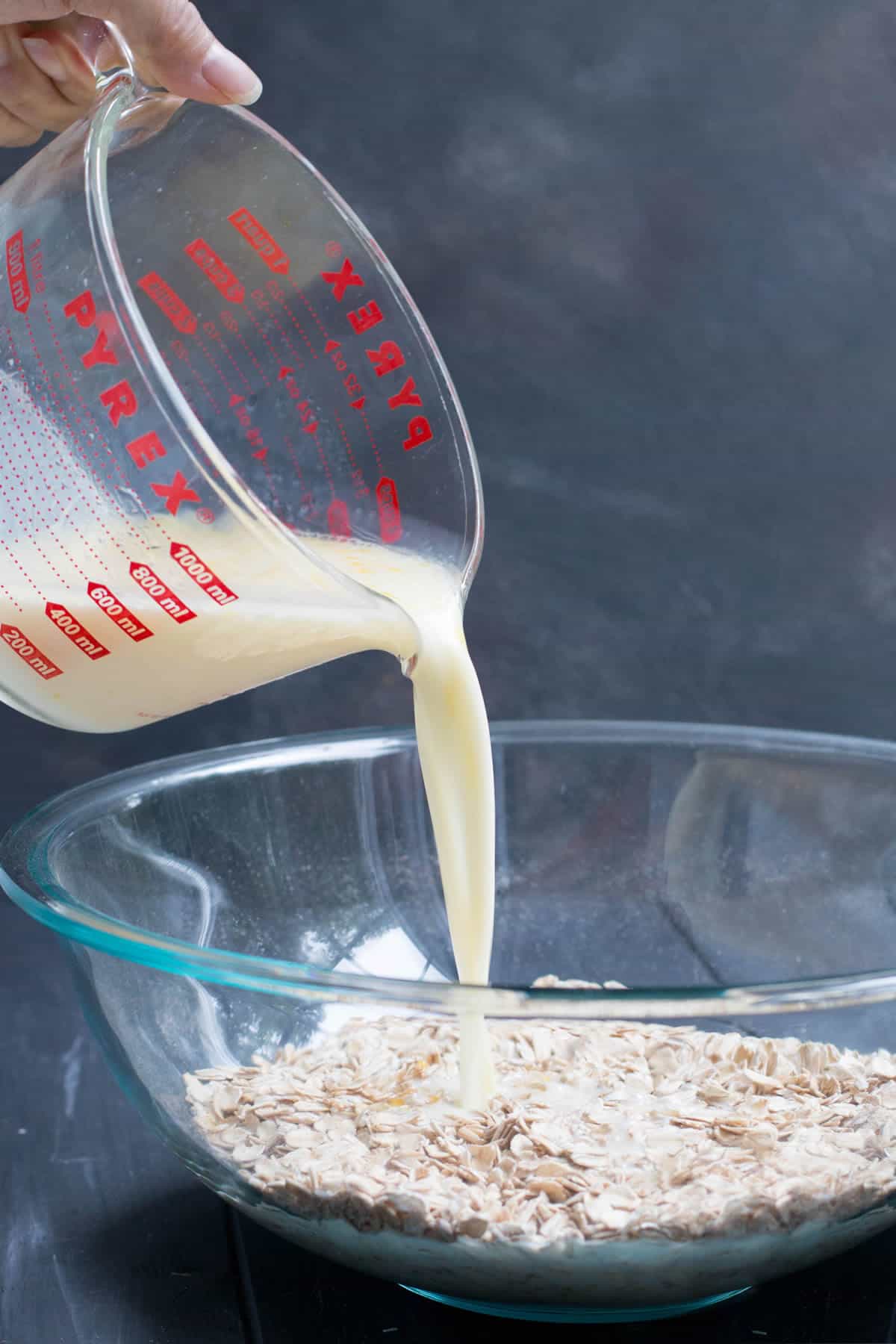 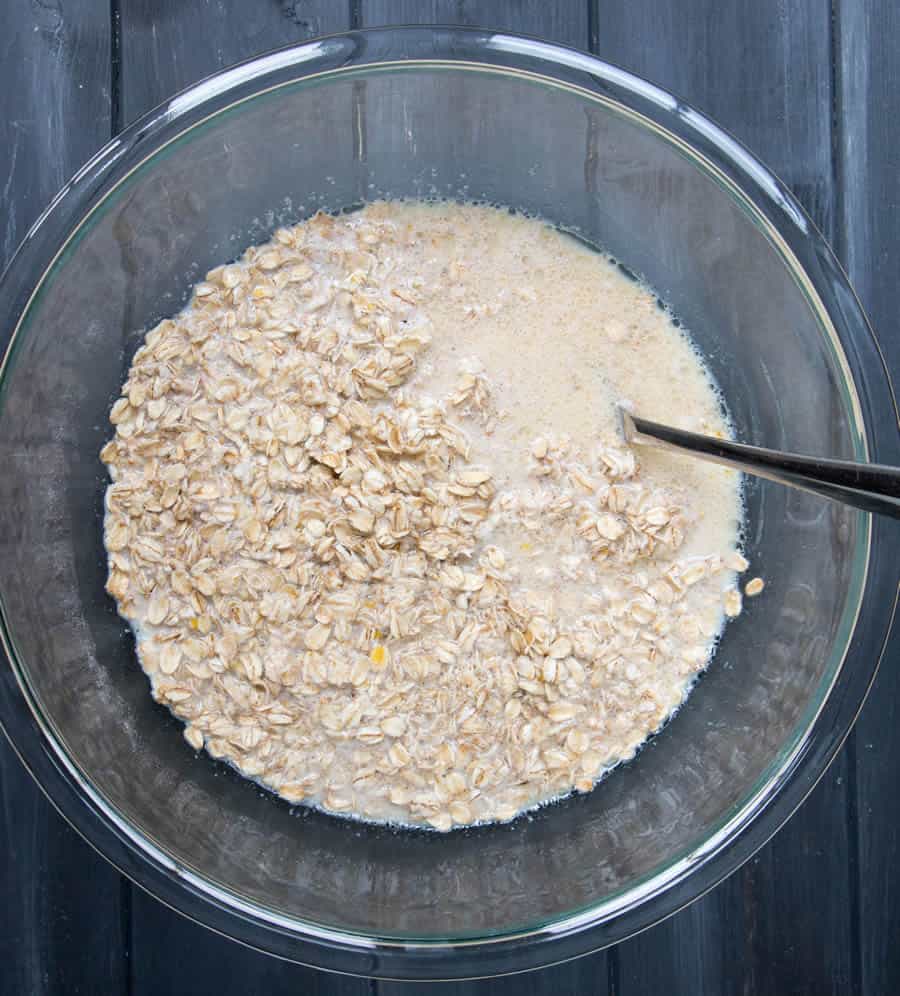 Secondly, I only filled the cups 1/2 full with the oatmeal mixture.  There needs to be enough room for the pie layer to form.

When you’re filling the cups, it’s also important to balance the liquid with the oats so that you don’t end up with all oats or all liquid in any one cup. My process for doing that is to first just work on dividing the oats.

I spoon the oat mixture into the cups, not worrying about trying to get much of the liquid with each spoonful. Once I get the oats divided, I go back and adjust if one cup has too many oats or if one doesn’t have enough.

Once the oats are nicely divided, I use my spoon to divide the remaining liquid among the cups. 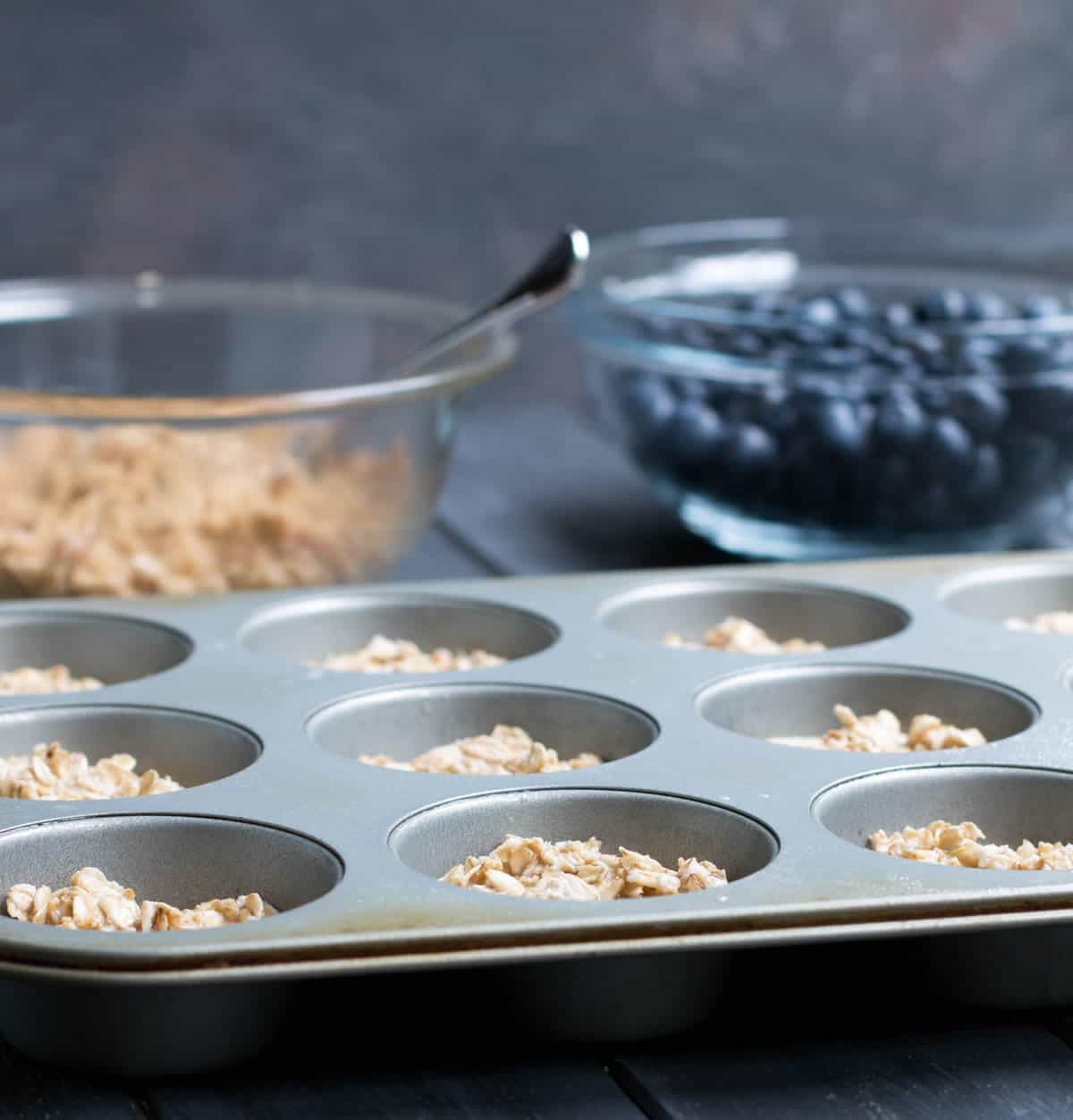 Now it’s time for the berries. I piled the blueberries on top of each cup. There should be plenty of room since we only filled the cups halfway with the oats. You want to be generous with the blueberries so that you get a nice layer, but you don’t want to pile them sky high (or they’ll bubble up all over your oven.) I basically added one thick layer of big chunky blueberries. 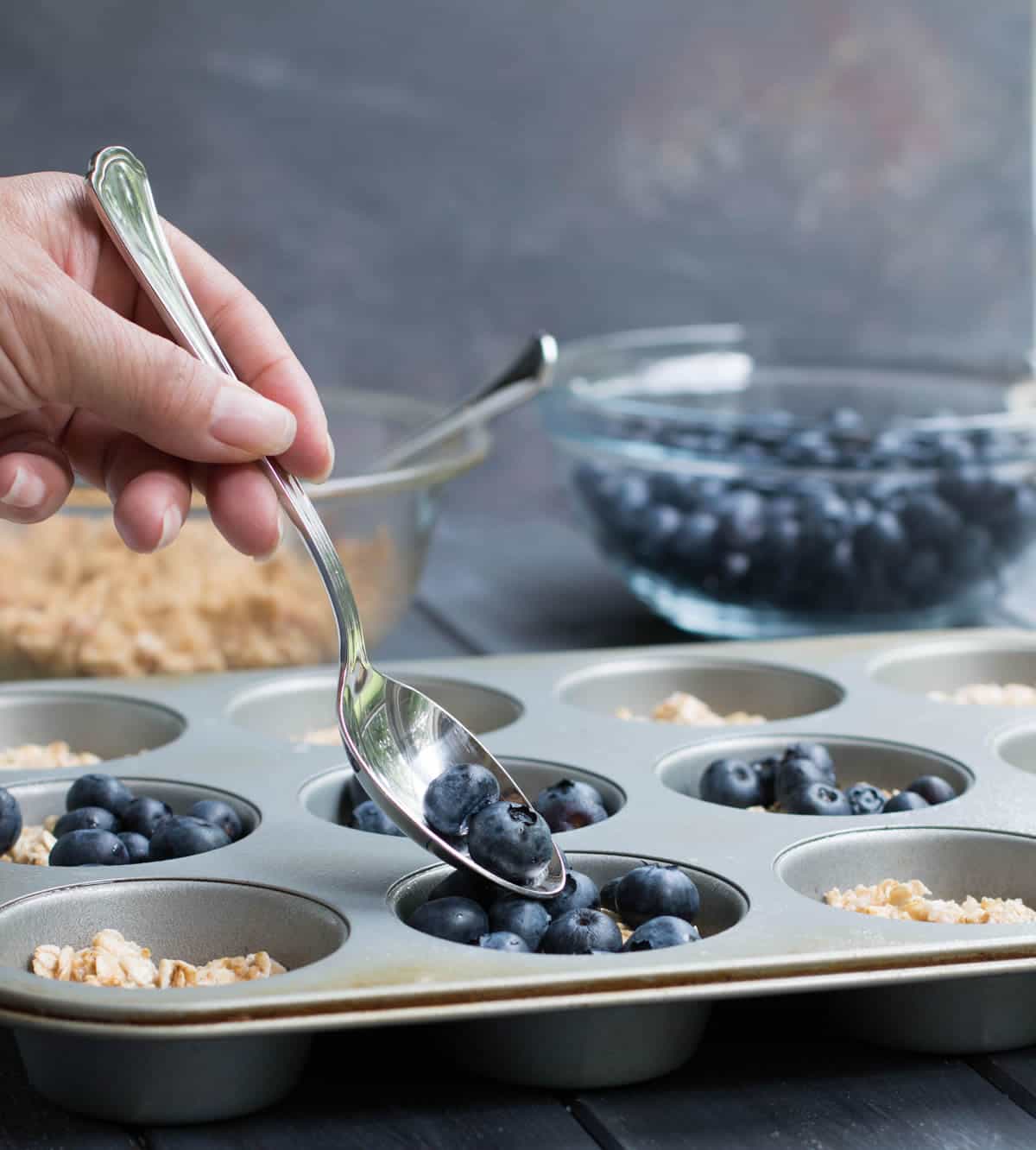 And because I’ve been obsessed with crumb topping this year, I made a small batch and topped the fruit with it. First, it makes me happy. Second, this is where the sweetness comes in. I don’t sweeten the oatmeal mixture itself, (though you can if you want to.)

Third, it’s got more oats in it! And pecans! Two thumbs up for more fiber and protein! 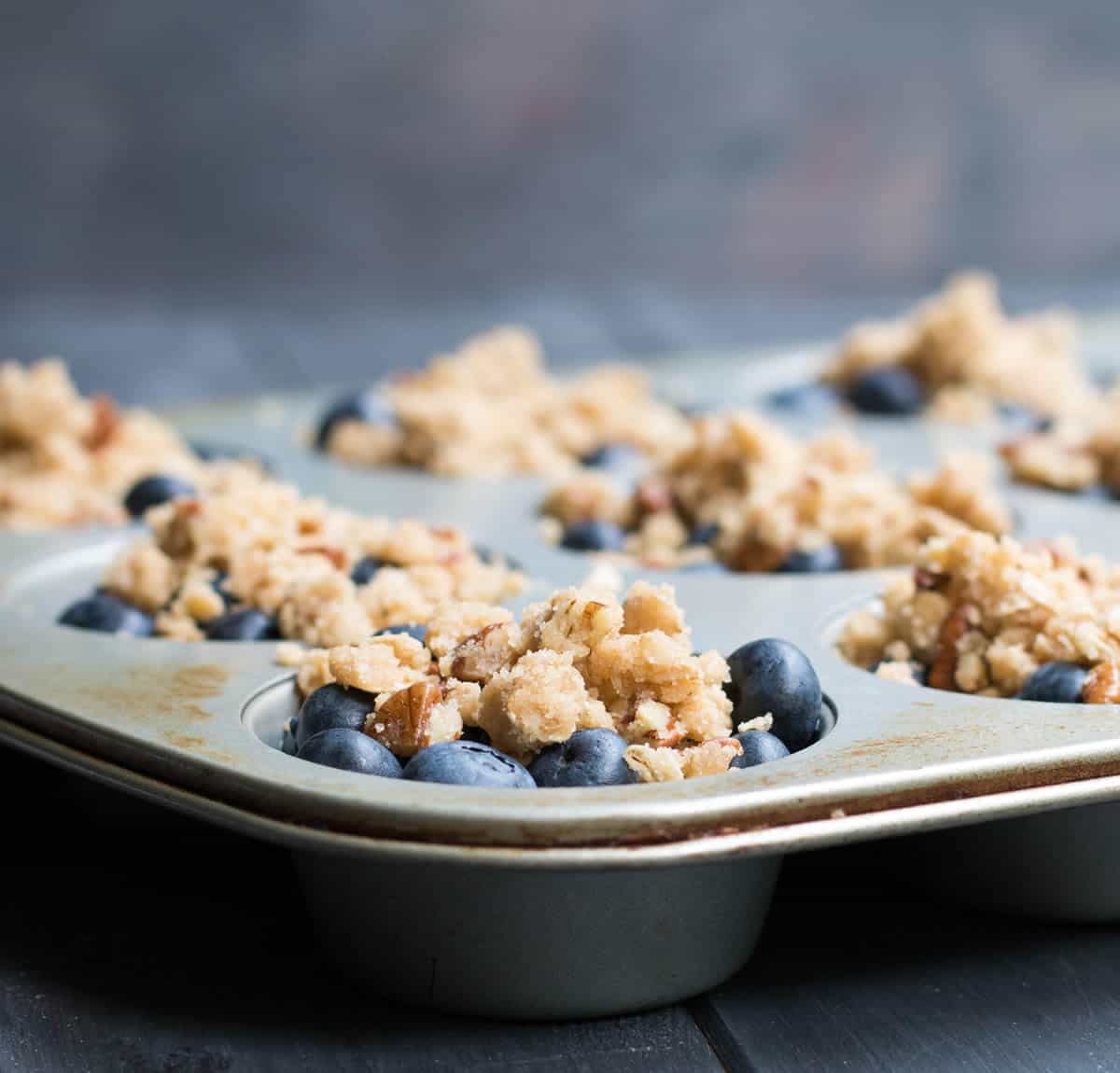 I know some of you would hate oatmeal without enough sweetness. As always, you can tailor this recipe to your taste. You can add sugar to the oatmeal mixture. You can double the crumb mixture. Or, you can simply add more sweetness at serving time…just like regular oatmeal you make on the stove.

My family was completely cool with just the crumb topping for sweetness. In fact, it was plenty for them. Like the banana version, the fruit does add sweetness on it’s own and my blueberries were plenty so it was all good. 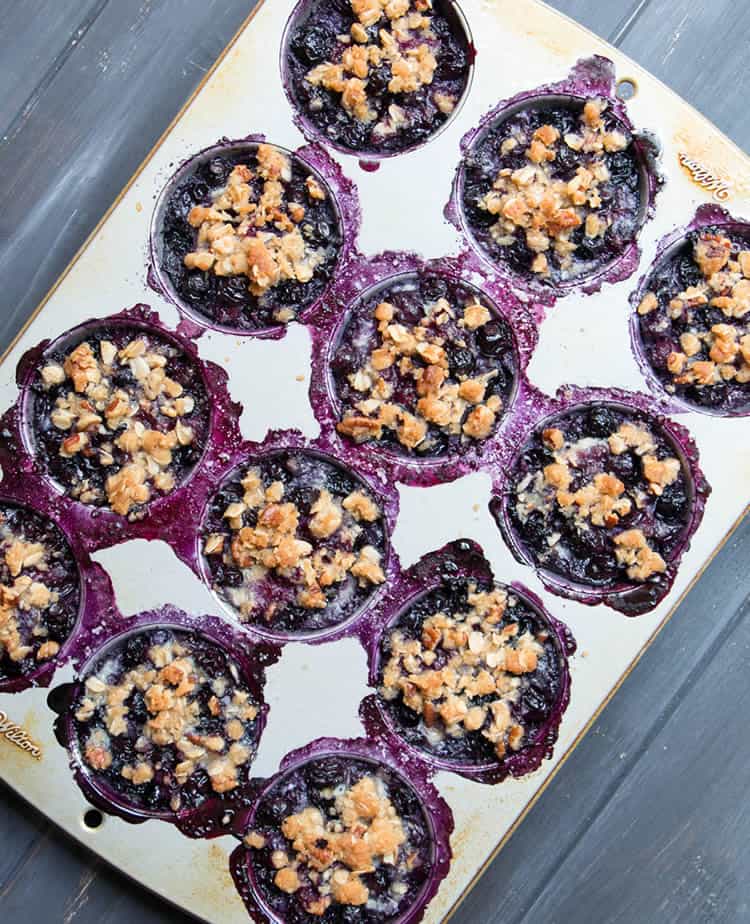 The recipe makes 18 individual cups. I know. I know. It would be easier if it just made 12, like the banana version, but I didn’t want to reduce the amount of oatmeal mixture to make room for the blueberries.

It was the same for the carrot cake version. I needed more room for the cream cheese. Instead of chopping down the recipe to make 12, I just let it be 18.

I figure, if I’m making Blueberry Pie Baked Oatmeal or Ultimate Carrot Cake Baked Oatmeal, 6 additional cups is a good thing, especially in a house that has growing kids with growing appetites. 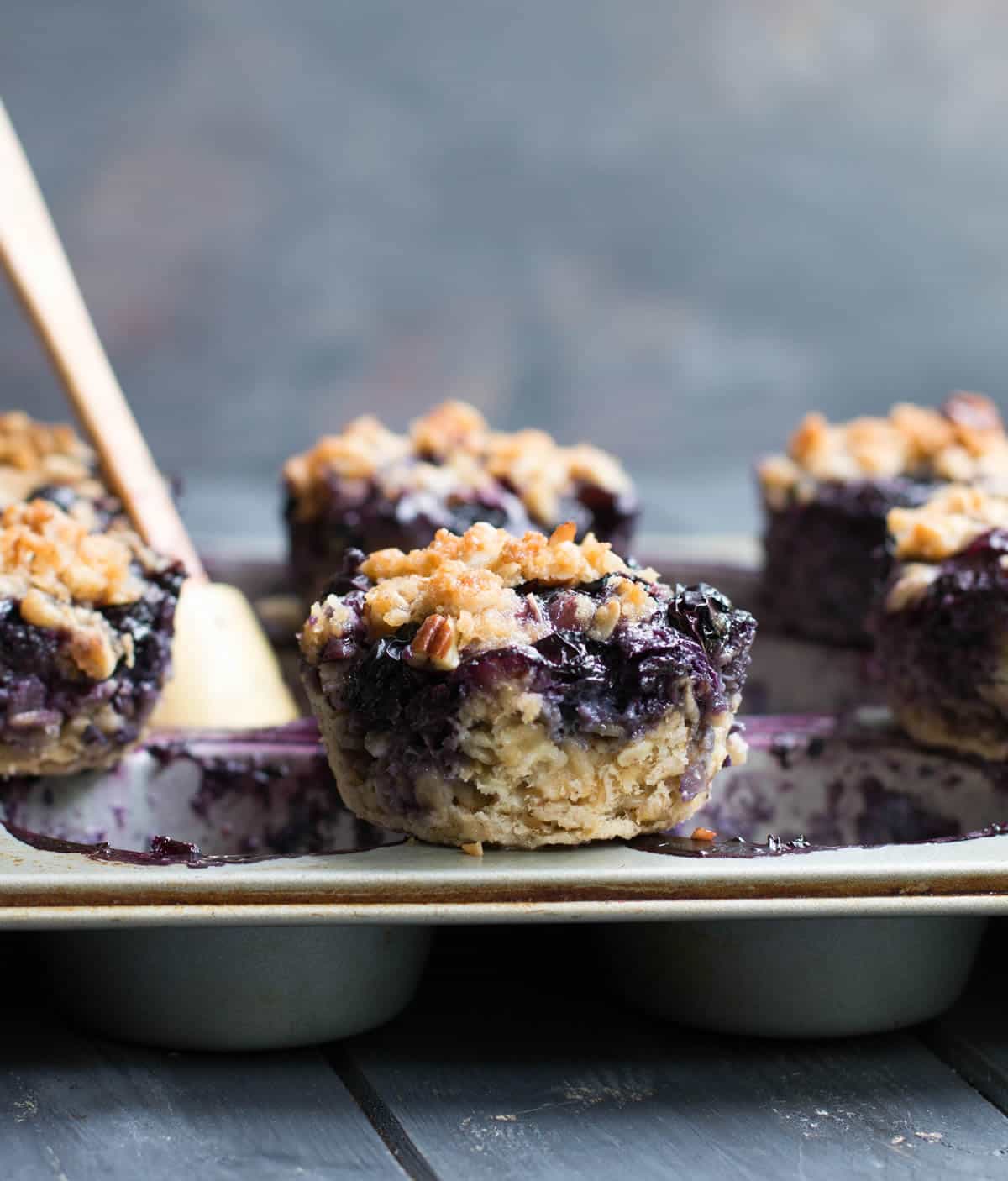 Anyway, it works as long as you have 2 muffin pans. I just fill the empty cups in the second muffin pan halfway with water so that the pan doesn’t overheat. If you don’t have two muffin pans, then you can bake the excess in a small baking dish.

And yes, it’s going to look all messy when it comes out of the oven. You might want to put a cookie sheet underneath your pan just in case, though I haven’t had any issues with dripping. But why chance it? (And no, even though it looks like a nightmare to clean, I just let the pan soak and everything came right off.) 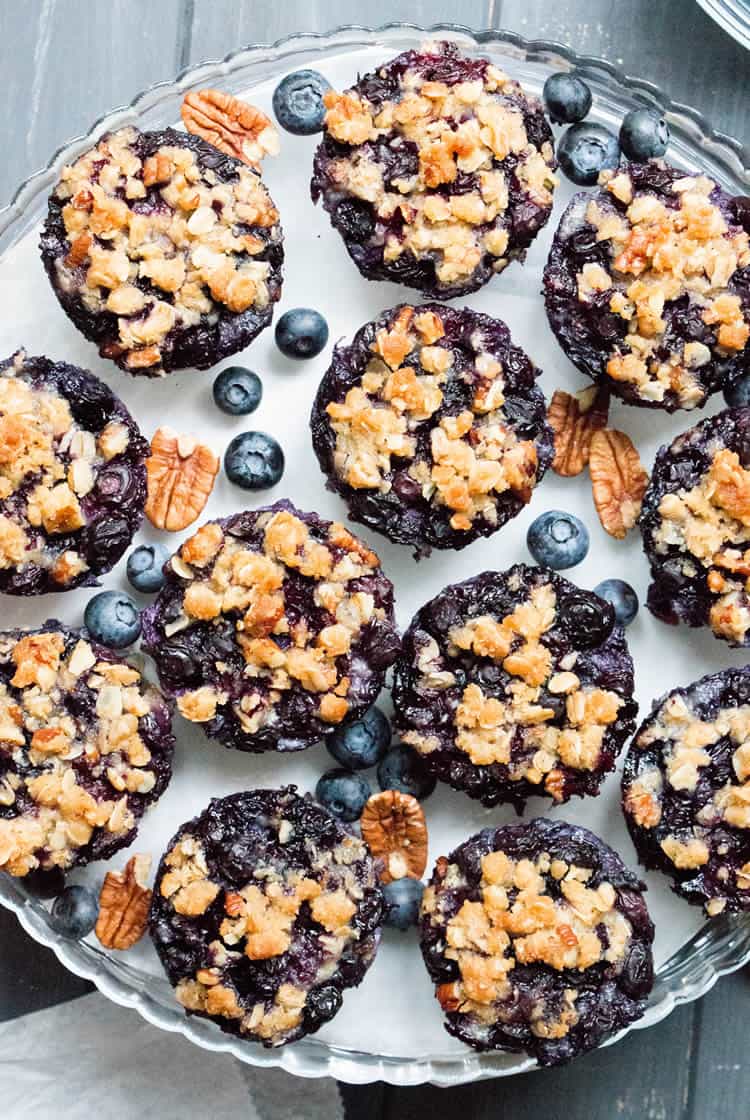 I will admit, however, that when I first saw the oatmeal baked in all its juicy blueberry glory, I thought, they’re never going to come out of the pan. But, they did just that. Without issue. You just need to give them about 10 minutes to set up before you remove them.

And when you do…you’ll see that you’ve got this wonderful layer of juicy blueberry pie topping your daily dose of oats. That’s right. We just used plain ole’ blueberries topped with sweet buttery crumbs. It’s like magic…blueberry pie just happened right on top of your oatmeal!

We usually eat two muffin cups for a serving. But with this new Blueberry Pie Baked Oatmeal?  Everyone had three. 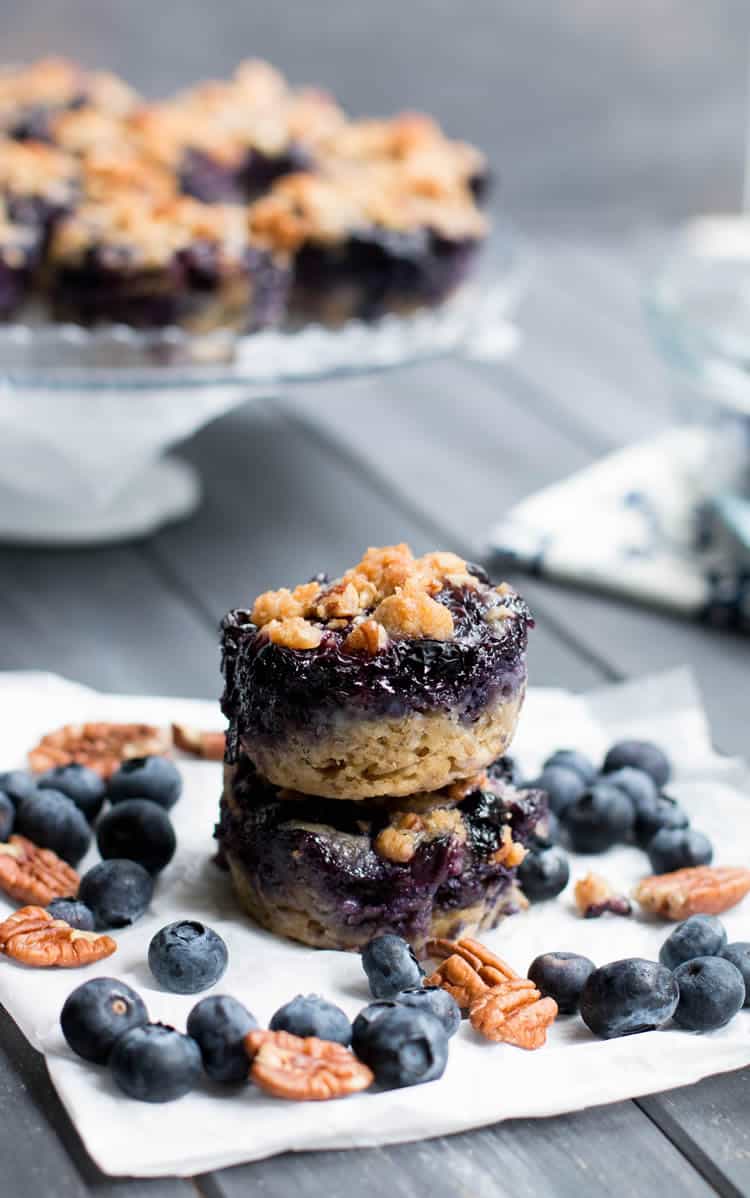 For the crumb topping:

*This recipe makes 18 oatmeal cups. I use two 12 cup muffin pans. I spray all of one, then just the middle 6 cups of the second pan. I fill the empty cups in the second pan half full with water so that I don't have any empty cups baking in the oven and overheating the pan.

*If you don't have a second muffin pan, bake the excess in a small baking pan or ramekins, if you have them.

*Place a cookie sheet underneath your pan if you're worried about overflow of juice from the berries once they start bubbling. I haven't had an issue, but it's better to be safe.

*The amount of blueberries you use will vary depending upon how large or small your blueberries are. If you have tiny berries, you'll have more than a single layer in your cup. Check the post for photos and just fill your cups accordingly.

*You can use any kind of milk you like, almond, rice, soy, coconut etc.

*If you'd like more sweetness, you can add sugar to the oatmeal mixture, or double the crumb topping. Or, you can just add more of your preferred sweetener at serving time.

*I store these covered in the refrigerator. We eat them cold or warmed in the microwave, though I personally prefer them warmed up.

I have fallen in love with your oatmeal recipes! So far I have made the banana and the pumpkin - so good! I am excited to try the blueberry recipe but I had a couple of questions. Can I use frozen blueberries? Can it be made in a square pan instead of muffin tin? Thank you so much!

can I make it with instant oats?

Melissa, I'm so happy to hear you're a fellow baked oatmeal fan. First, all of my baked oatmeal recipes can be made in a square pan. The only one that might work a little differently is the carrot cake version, since each cup is filled with cream cheese. Of course, you could dollop cream cheese throughout a whole pan and I think that would work fine. I knew someone would ask about frozen blueberries and I really wanted to test it so I could answer from experience. But I still haven't tried it :( My guess is that it would work out just fine. Most of the time, you can sub frozen fruit for fresh in a recipe. Advice is generally to use the fruit frozen and not to thaw it. Just break up the berries as best you can and top the oatmeal. You might need more blueberries to cover the surface of the full pan of oatmeal so you get a nice juicy layer. And, because the berries are frozen, you might need to add some baking time. It's possible you might need to reduce the liquid a touch, but I would keep it the same for your first try. Other than that, I think you should be good to go. Baked oatmeal is pretty flexible and can handle a lot of variations. Let me know how it works out for you!

What a delicious idea, these little cuties look mouthwatering! Thank you for sharing! :)

Thanks, Nicole! The fruity layer on top makes these seem like a splurge, but they're not!