That’s right. I said, “Ultimate.” Why is this the Ultimate Carrot Cake Baked Oatmeal? Two words. Cream. Cheese. Oh and of course it has oatmeal and carrots and pineapple and nuts and raisins and, um, did I mention the cream cheese? ;) 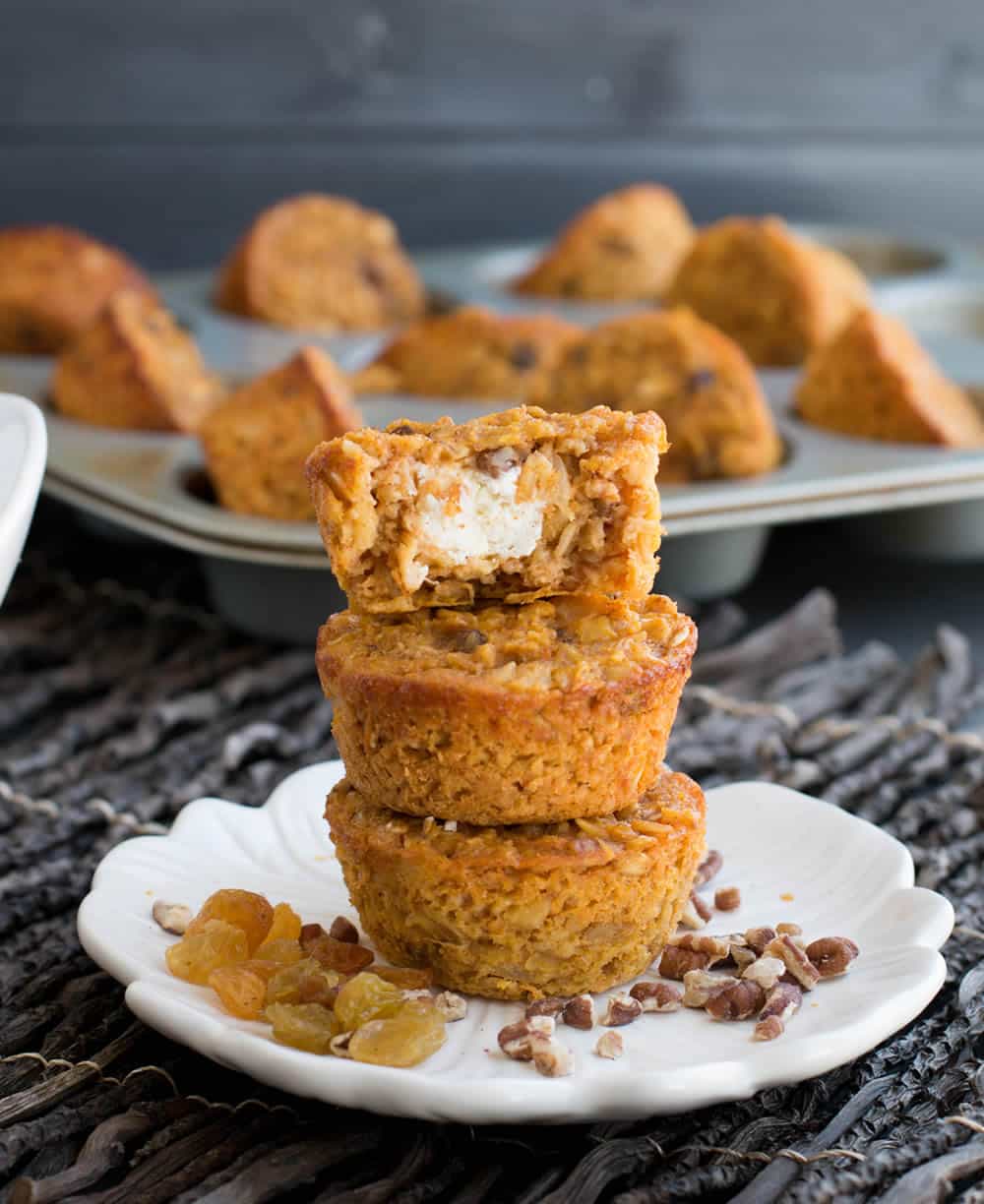 I was inspired by my Blueberry Cream Cheese Muffins. Yep, there’s just a little nugget of cream cheese surprise inside of those muffins. Not cheesecake filling, just cream cheese. And, it works. It adds such a nice richness and creaminess to the muffins. 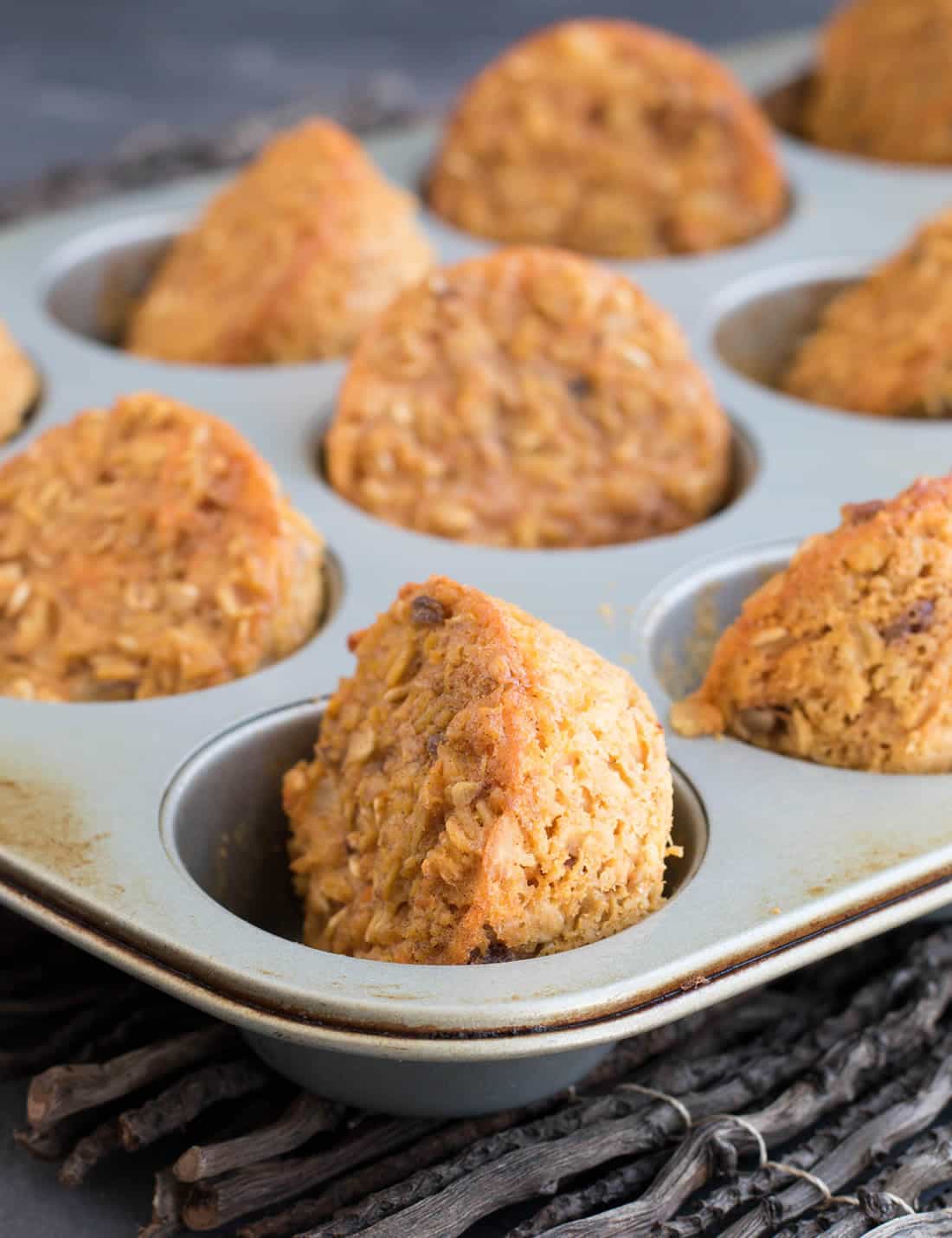 So when I set out to make the Ultimate Carrot Cake Baked Oatmeal, I knew that cream cheese had to be involved. Even better, having had such success with the muffin recipe, I knew it would work well.

That being said, I still ended up testing this darn recipe 3 or 4 times. That was mostly because there was some disagreement among my testers about what kind of carrots I should use. Not the variety of carrots, but how they were prepared. 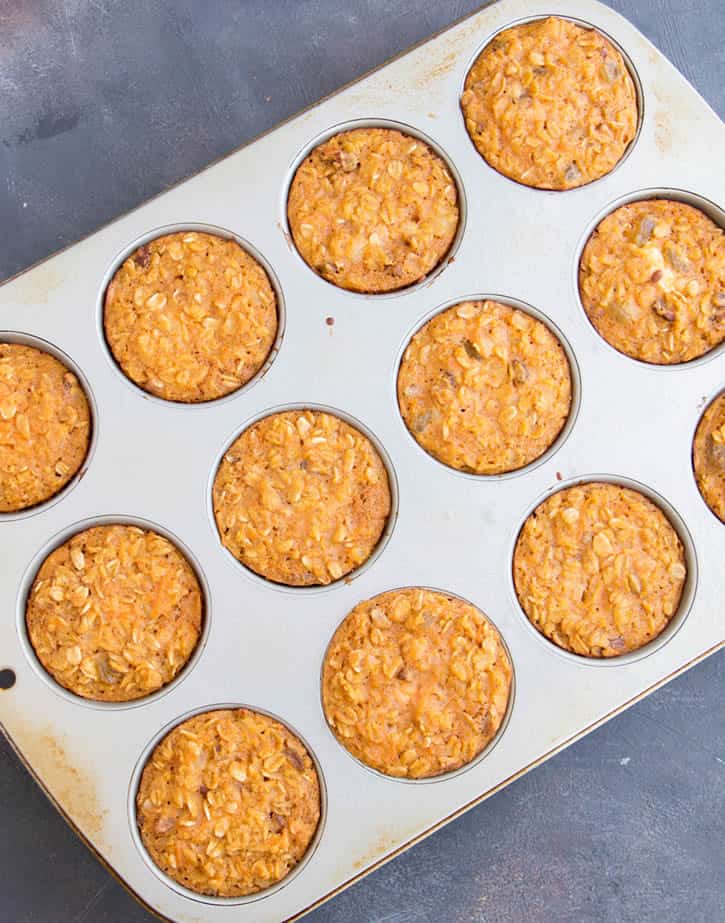 I started with pureed carrots…from the baby food aisle. Besides being a trip down memory lane for me, it was a quick recipe shortcut. I figured, we’re making breakfast here, not some fancy dessert. Let’s keep it easy. And, I happened to love how they worked in the recipe.

Some of my testers were wondering where the carrots were? C’mon guys, can’t you see that it’s orange!?! “But we can’t see/taste the carrots!”

Fine. I made a batch with freshly grated carrots and skipped my baby food short cut. I produced lovely cups of baked oatmeal with all the requisite shreds of carrots visible to the eye as well as some additional texture. They liked that better. 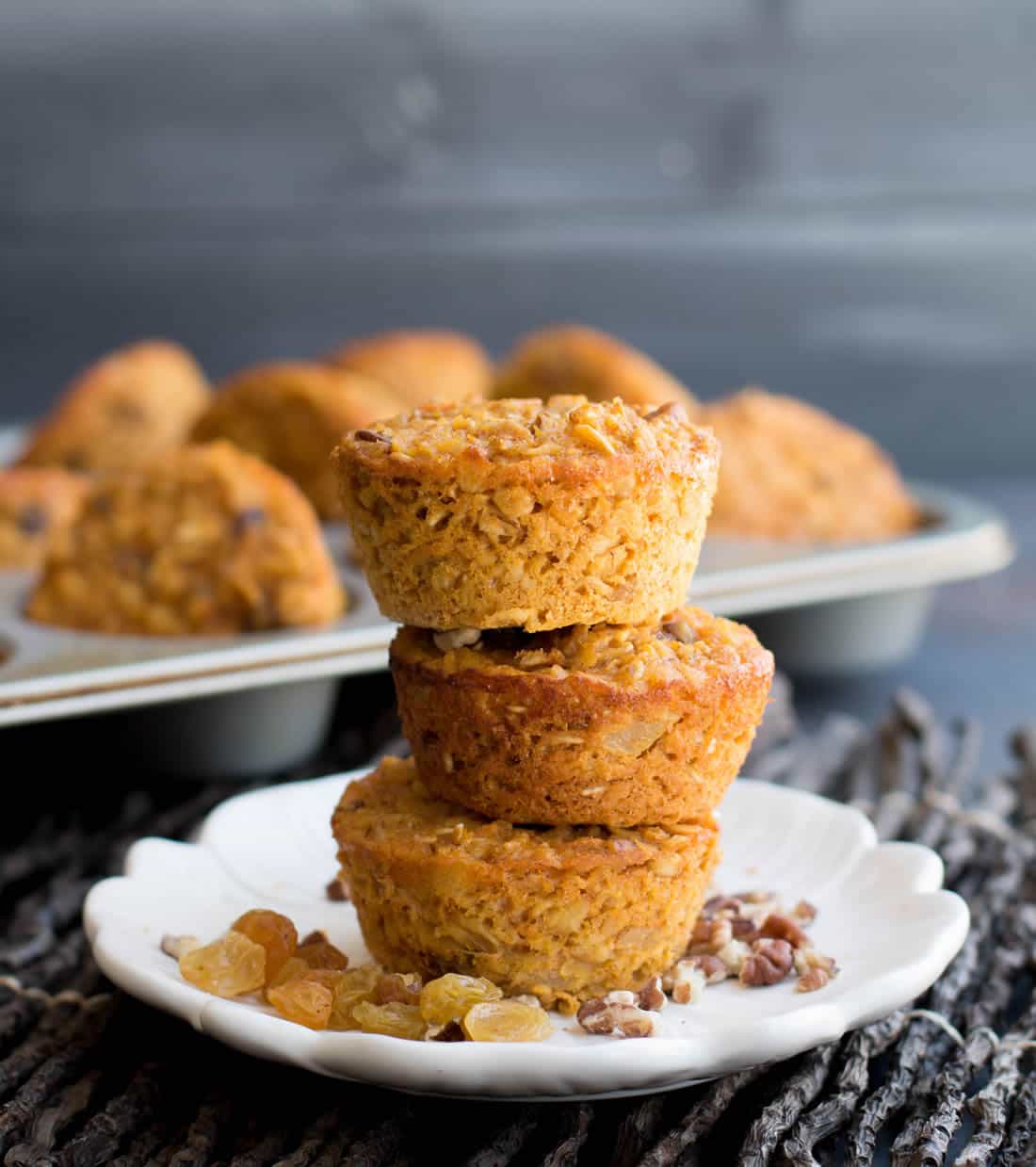 Me? I wasn’t sold. I liked the additional moisture and flavor that permeated the oatmeal from the baby food puree.

So I went with a compromise. I used my baby food short cut and added some grated carrots. Now everyone was happy.

And really, I did like the addition of the freshly grated carrots. First, it adds some extra whole food, which is always a good thing. Second, I liked the appearance of the carrot shreds. 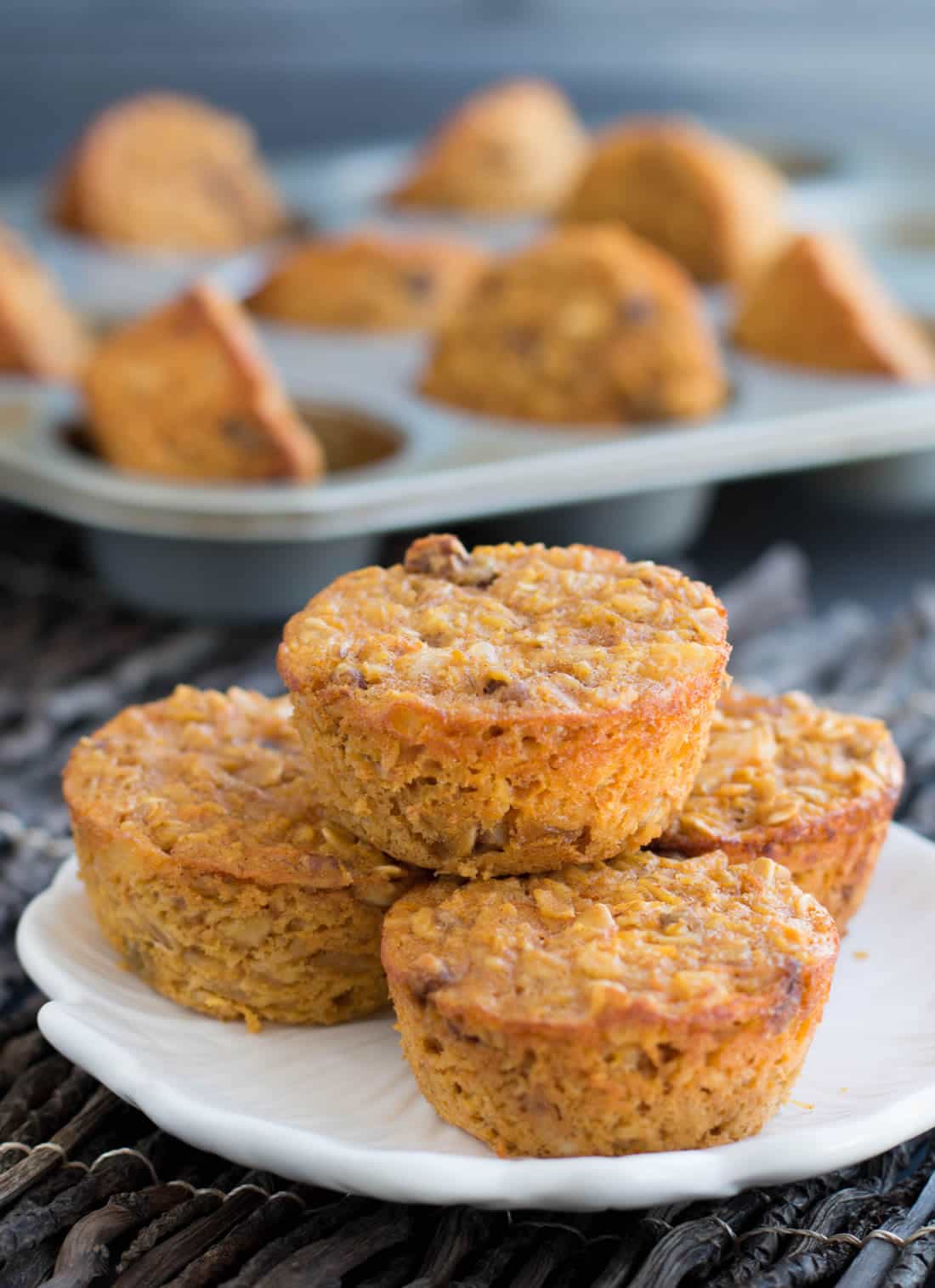 And while I wasn’t thrilled with the idea of grating carrots, (you know how I hate to grate large amounts of cheese) it was a quick step. I forgot how much easier it is to grate carrots than cheese.

The carrots are long enough to keep my hands a safe distance from the grater, and carrots are sturdy and grate up quickly. I think it took me less than a minute to grate what I needed for the recipe.

In fact, I went to town and grated up more than I needed. No problem. I added them to my salad for lunch that day. They were so much more flavorful than pre-grated carrots from the store. But I digress. 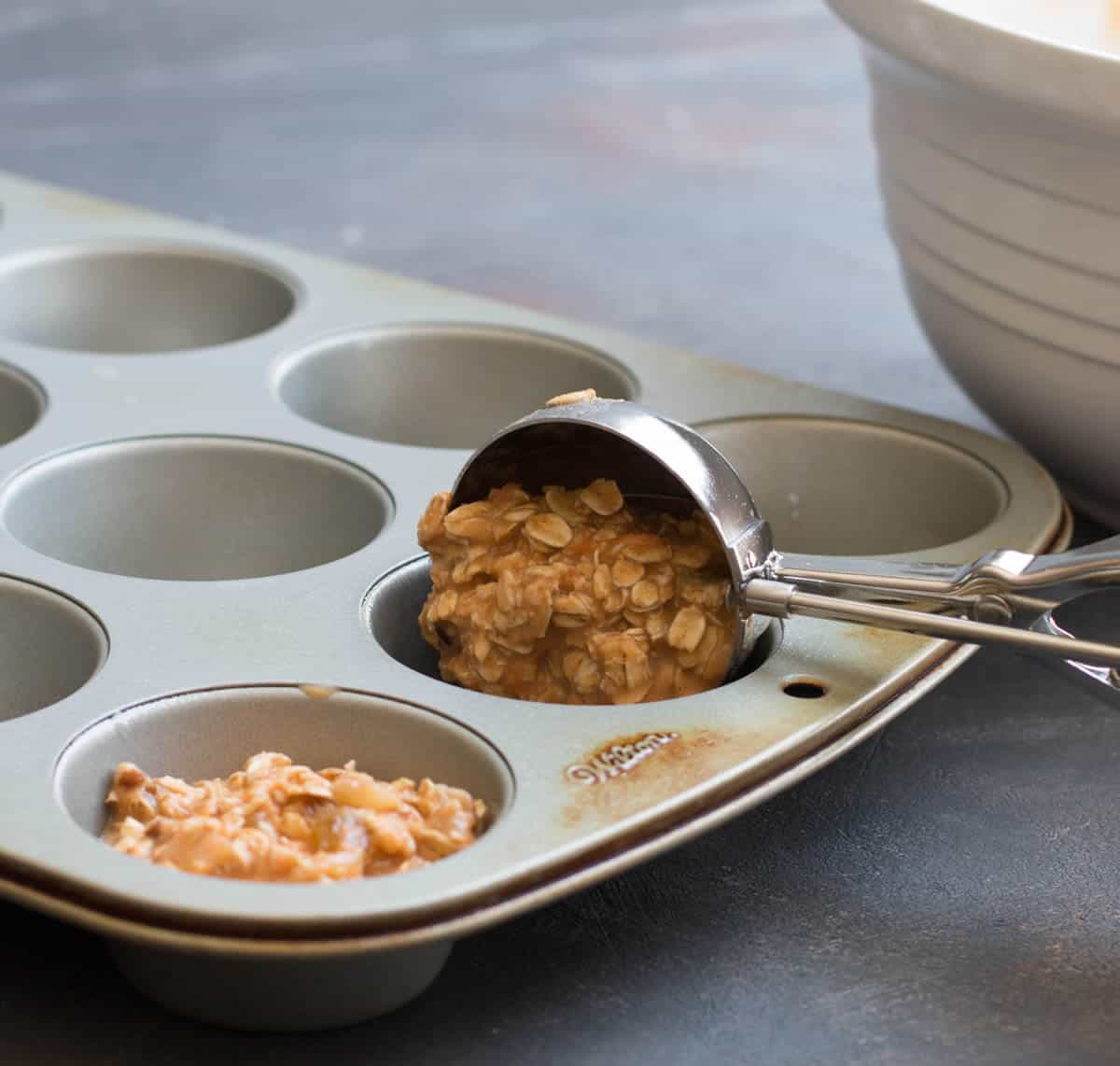 You’ll add those grated carrots along with the pureed carrots into your oatmeal mixture. Once everything is mixed up, you’ll fill your muffin cups. The baked oatmeal doesn’t rise a lot, but you do need to leave a little room for your cream cheese.

When I developed this recipe, I started with my base that makes 12 baked oatmeal cups. When I was finished adding all of my extra fillings, what with the raisins and the nuts and carrots and all, I ended up with about 18 baked oatmeal cups. I almost re-worked the recipe back down to 12, but really, I liked having extra.

And I’ll admit that I have a little pet peeve with recipes that make less than a full pan, but if you have two muffin pans, it’s no issue. I just filled 6 more cups in my second pan with oatmeal and then filled the remaining empty cups half way with water.

Why do I fill the empty cups with water? It helps keep the pan from over heating. The water “fills” the rest of the cups so that the pan bakes just like the pan that has all 12 cups filled with oatmeal.

If you don’t have two muffin pans, you can always bake the balance off in a small baking dish. Or, you could cut the recipe in half and make 9 cups. Hopefully, you’ll forgive me the odd 18 muffin cup recipe and just be pleased that you get six more muffin cups filled with baked oatmeal :) 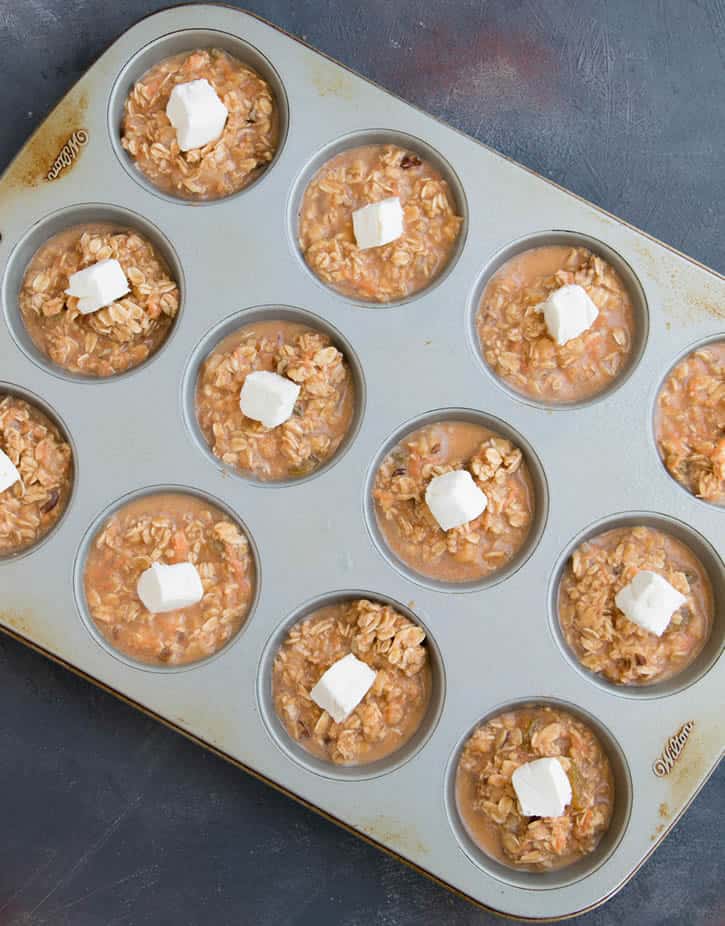 On to the cream cheese. This is an easy step. All you need to do is cut some block cream cheese into, well, smaller blocks. I’d say about the size of dice. They don’t have to be perfect. You just want them large enough to actually taste once the oatmeal is baked, and small enough that they don’t fill the whole cup. 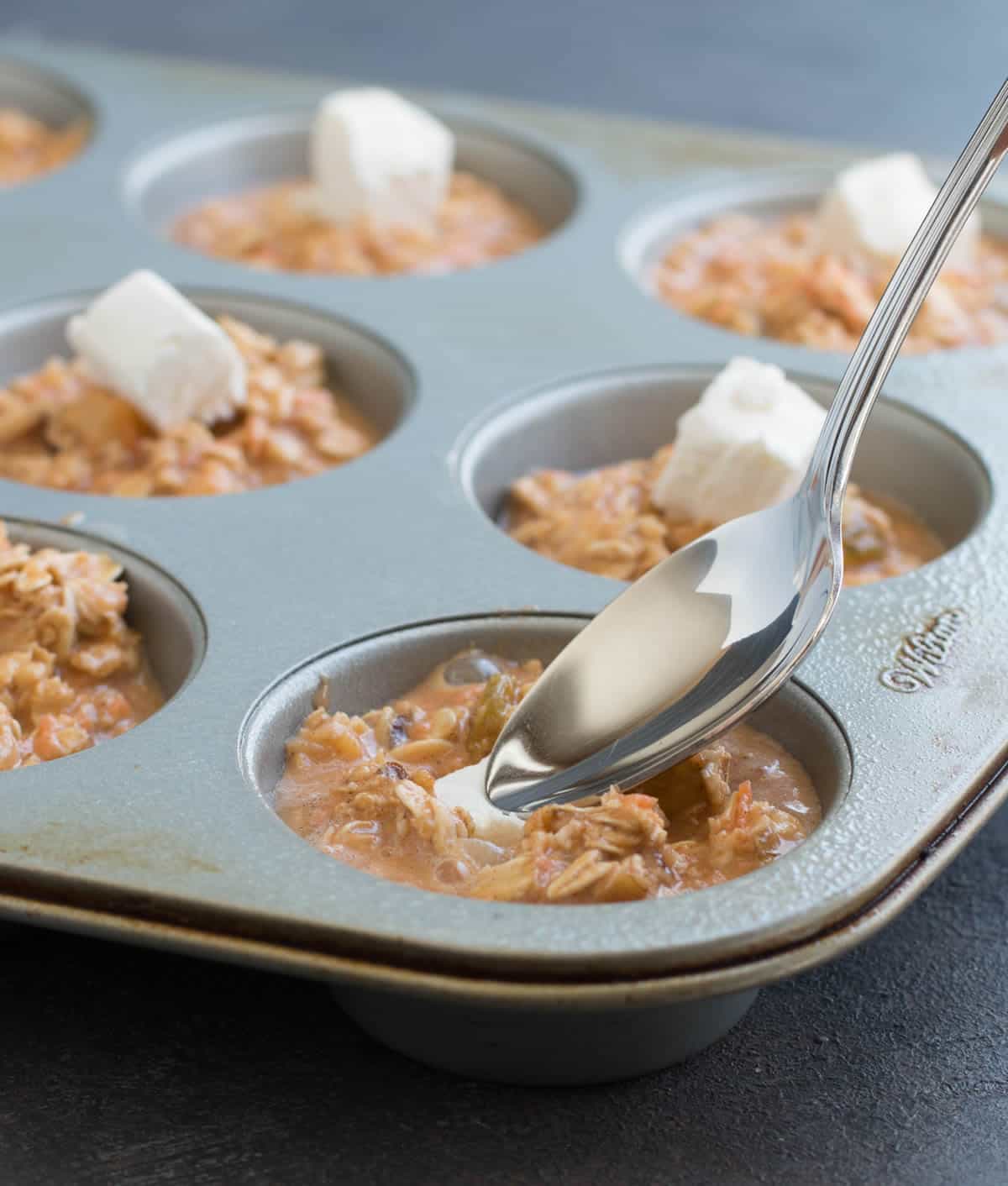 Just top each filled oatmeal cup with a small chunk of cream cheese. Then, using a spoon, bury the cheese in the oatmeal. Once it’s pushed into the center of the cup, just spoon some of the oatmeal in the cup on top of the cheese so that it’s covered. Use your spoon to smooth the top and then, you’re on to the next one. 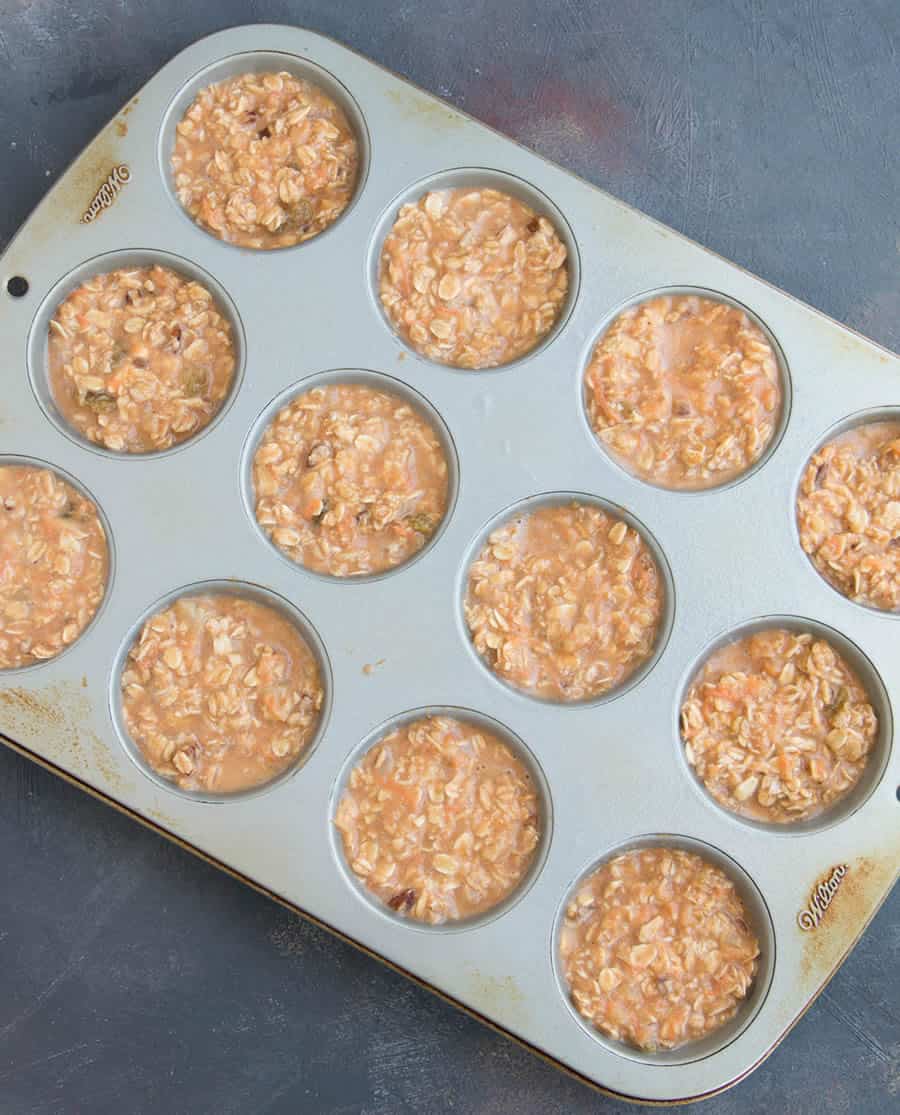 You’ll speed through the “submerge the cheese” process and then they’ll be ready to bake. When they come out, let them cool. They’re much harder to remove when they’re warm. 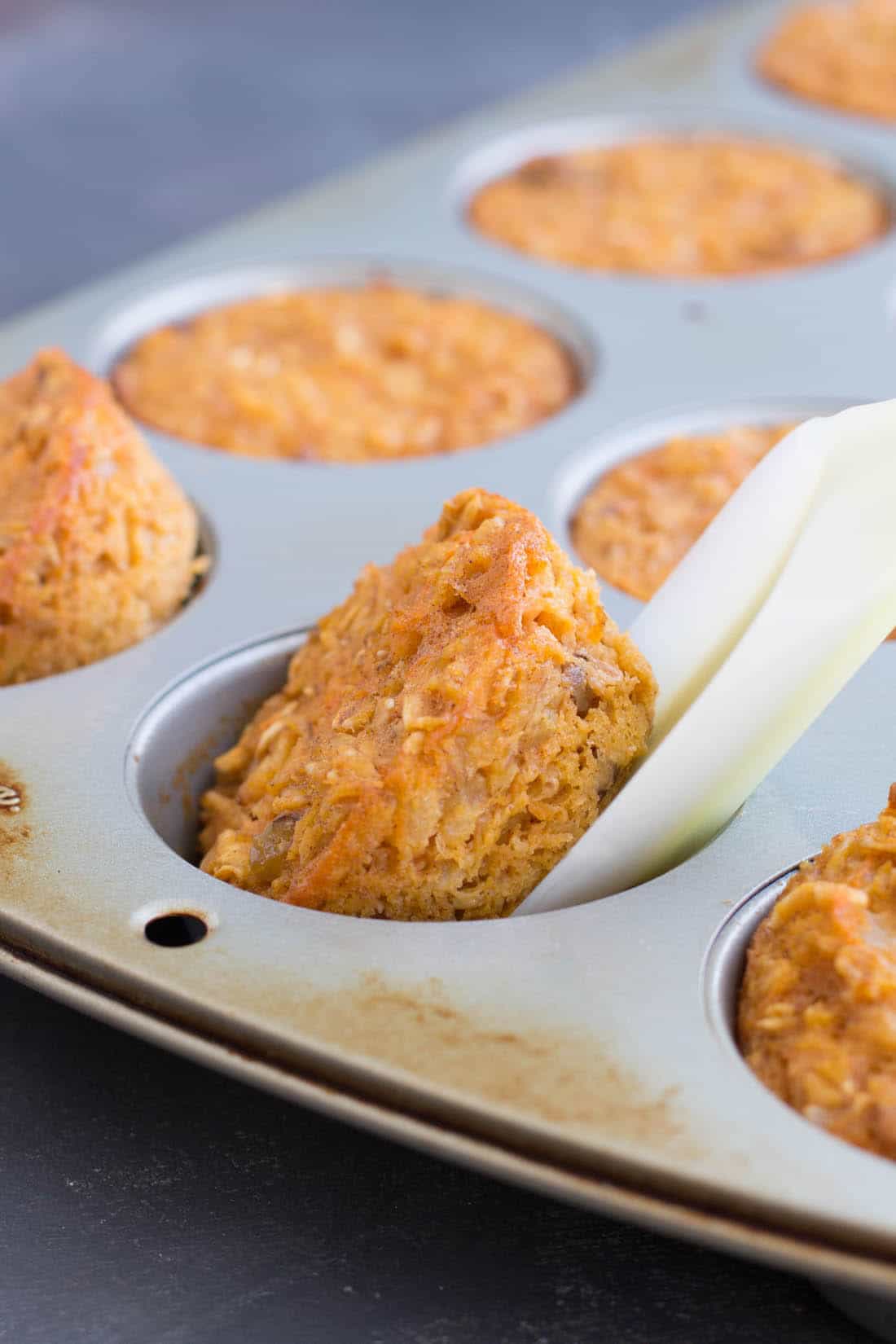 Once they’re cool, they set up and are much easier to scoop out. I use a curved rubber spatula to release the edges and then scoop the whole baked cup out. There’s nary a broken cup. They come out quite nicely as long as you spray the pan and then allow them to completely cool.

I have two other baked oatmeal recipes on the site. Baked Banana Oatmeal Cups and Pumpkin Spice Baked Oatmeal. The whole baked oatmeal category has been really popular for those of you who want a make ahead, grab and go breakfast.

Baked oatmeal is in regular rotation around here. It’s a great choice for an easy breakfast and filling for a quick snack. We’re loving this new flavor variation. I’ve got baby food carrots and pineapple ready to go in my pantry as we speak.

I even have cream cheese on hand. And that’s mandatory, because what would Ultimate Carrot Cake Baked Oatmeal be without the cream cheese? Just plain ole’ carrot cake baked oatmeal, I say. And why be plain, 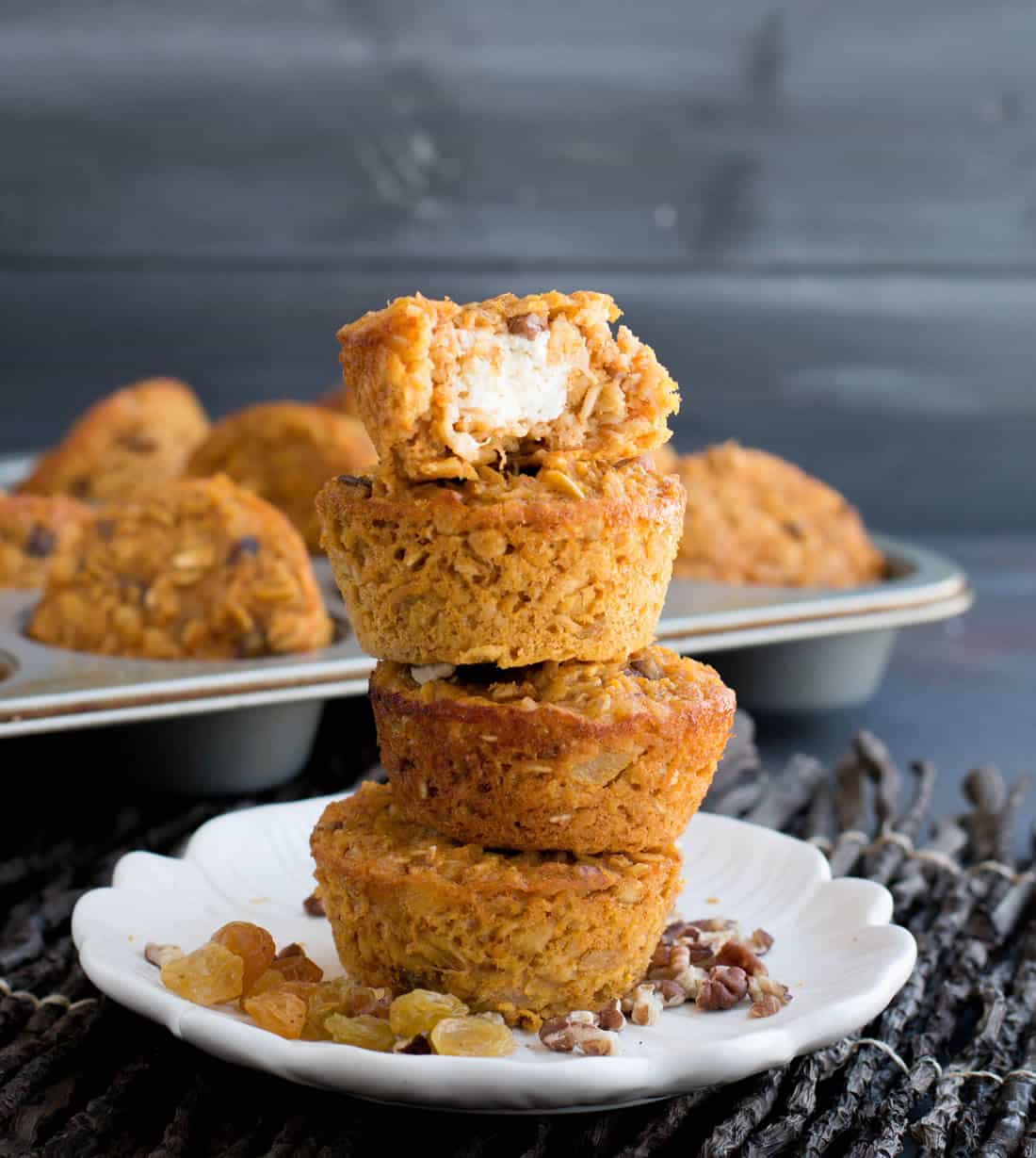 when you can be the ultimate?

For the oatmeal cups:

*Since this doesn't fill two full muffin pans, you'll have some empty cups in your pan. Fill these half way with water so that the pan doesn't over heat.

*You don't have to go crazy straining your crushed pineapple. It's okay to be juicy. I just used a spoon to lightly strain it against the side of the can before spooning into a measuring cup.

*Please insure you use old fashioned rolled oats, not quick oats. Quick oats don't stand up as well to all of the liquid in this recipe and you may end up with mushy oats.

*Like all of my baked oatmeal recipes, this one is just lightly sweetened. Feel free to double the sugar for extra sweetness.

*I used canned crushed pineapple in it's own juice. If you use pineapple in heavy syrup, it will add more sweetness to your oatmeal.

*I have frozen my Baked Banana Oatmeal cups with success. Because of the cream cheese filling in this recipe, I'm skeptical that it would hold up in the freezer without the texture being compromised. I may try it next time and will report back.

Made these.Great recipe. They taste great, and look exactly as pictured. I used about 1/3 C shredded carrot and substituted unsweetened applesauce for the pureed carrot. Since I used more carrot, I didn't use a full 8 oz. of applesauce; probably 6oz. I also used canola oil instead of olive oil as I like that taste better. Also tried foil cup liners on my 6 cup muffin pan (since it is rather old) and they worked fine so will use those instead of spray in the future for easier clean up. Sweet enough to be a treat but also very healthy, wheat free, no artificial sweeteners or sweeter substitutes (which I react to), and lower GL than a typical carrot cake muffin. Very good recipe. Thanks.

I'm happy to hear you liked them, Suzanne! As you found out, it's a pretty flexible recipe so you can substitute here and there. Applesauce is a brilliant sub! I'll have to make note of that, since I usually have applesauce on hand. I happen to love the cream cheese center. It adds a nice richness without too much of a splurge. Also, love the idea of using foil cups. I think paper cups don't work as well as not using cups at all, but the foil cups should help with both heat conduction and easy clean up! Thanks for all the great feedback!