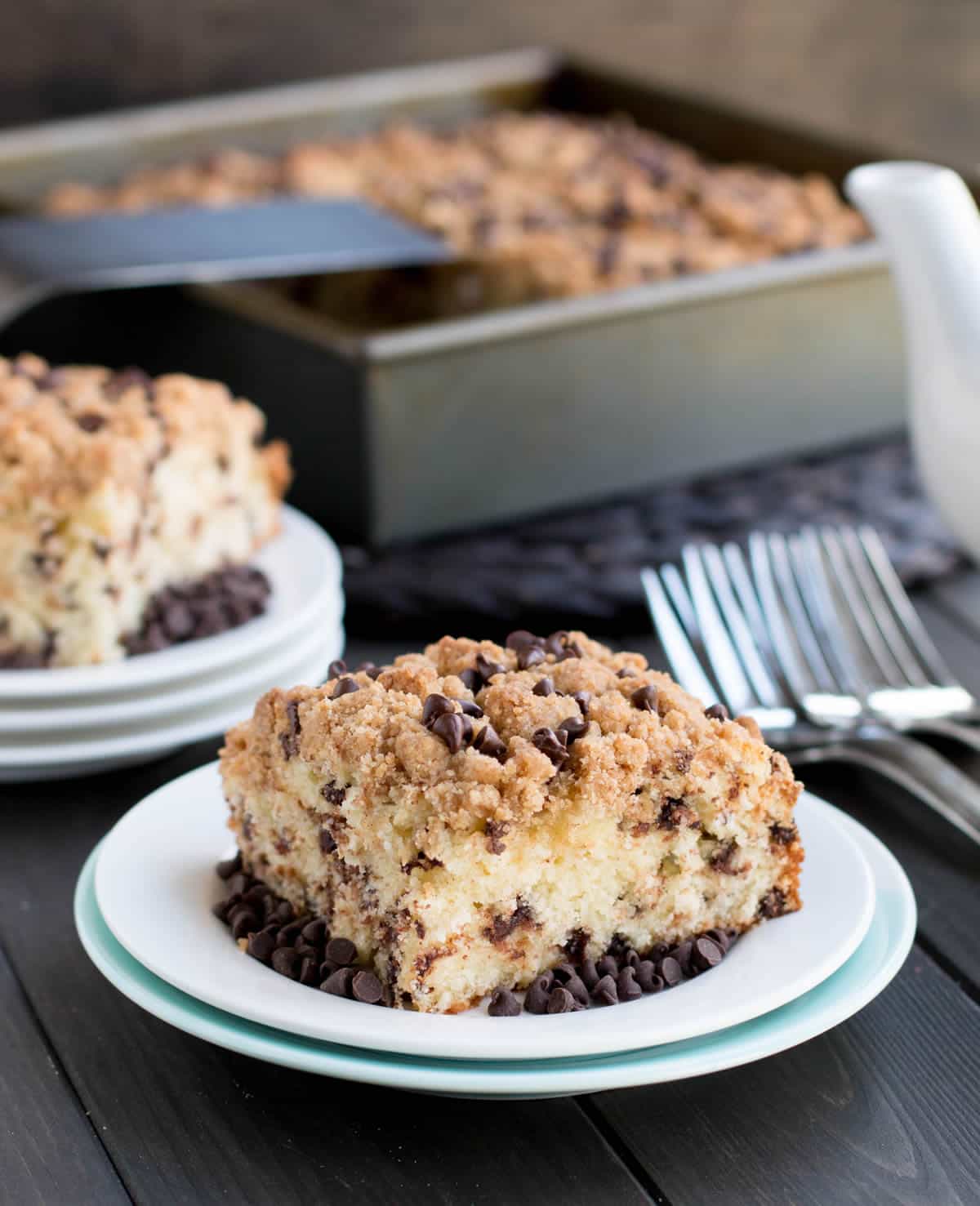 If you haven’t figured it out by now, breakfast is, hands down, my favorite meal of the day. The mainstay of a perfect breakfast for me will always contain eggs, bacon or sausage, hash browns and some kind of awesome toast or bagel.

But then there’s that morning dessert part of breakfast. That little somethin’ sweet part. Allow me, as I have many times before, to help you out with that…

First up, the chocolate. Yep, this is a perfect way to get a little chocolate into breakfast. Not that you couldn’t do that with Dark Chocolate Fudge Scones. That’s a triple threat of chocolate!

Today, chocolate is hanging back a bit. Instead of a triple threat, I’ve got some mini chocolate chips serving as a strong supporting actor to the star, which is the crumb cake itself.

There’s nothing like a crumb topped cake. Love it! There’s just something about that sweet crumbly topping that gets me every time. I love it on top of pies, like these Skinny Apple Pie Won Tons. 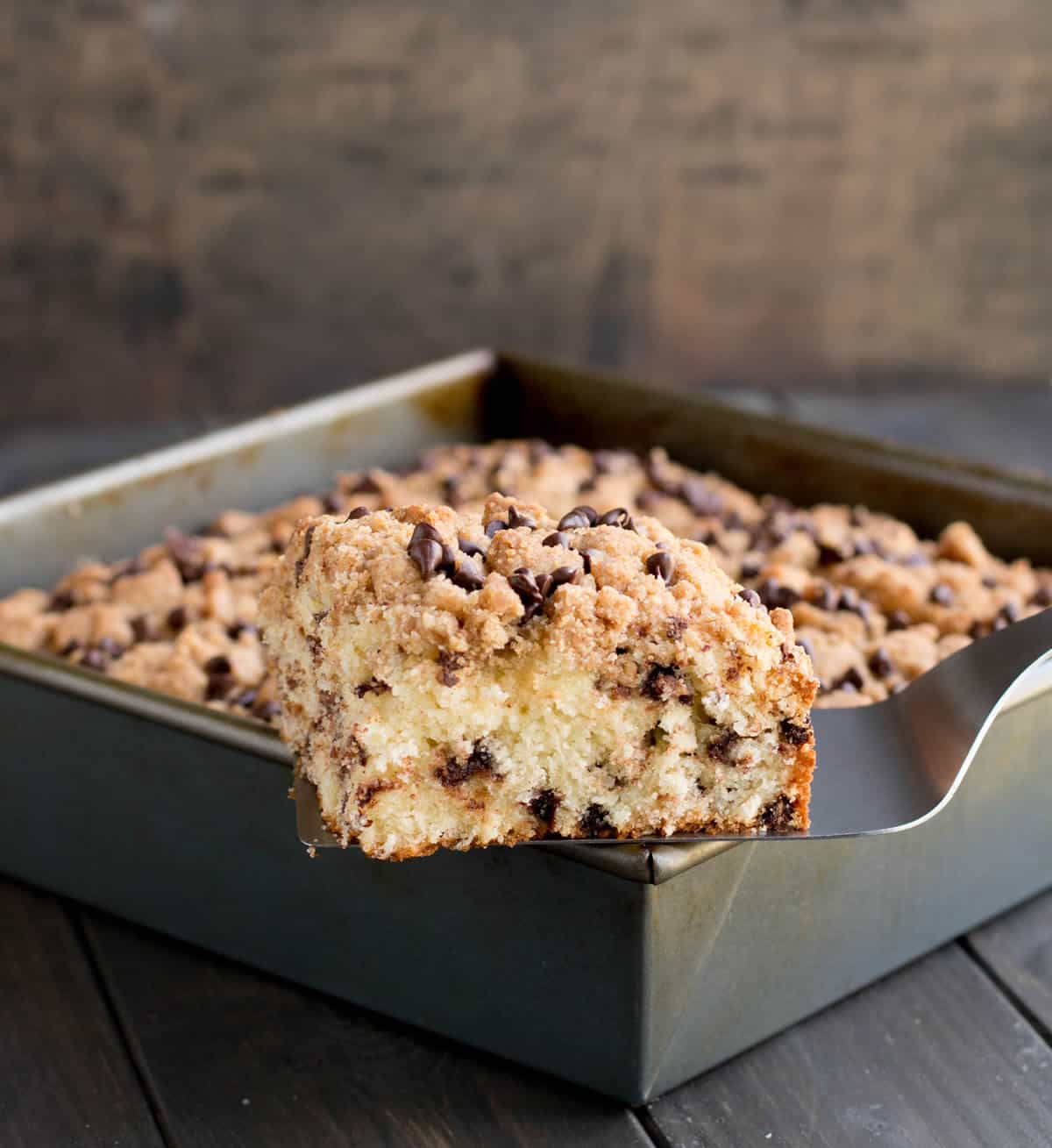 It’s delicious on top of muffins, like these Dutch Apple Pie Muffins and Egg Nog Crumb Muffins. Of course, just like today’s recipe, it’s perfectly at home on top of cake like my Lemon Ricotta Crumb Cake. That cake has a shortbread crumb topping. So good!

As per usual with cake recipes, this one needed some testing. But it was yet another case where everyone liked each iteration of the cake. When I produced my first version, it was a hit across the board. 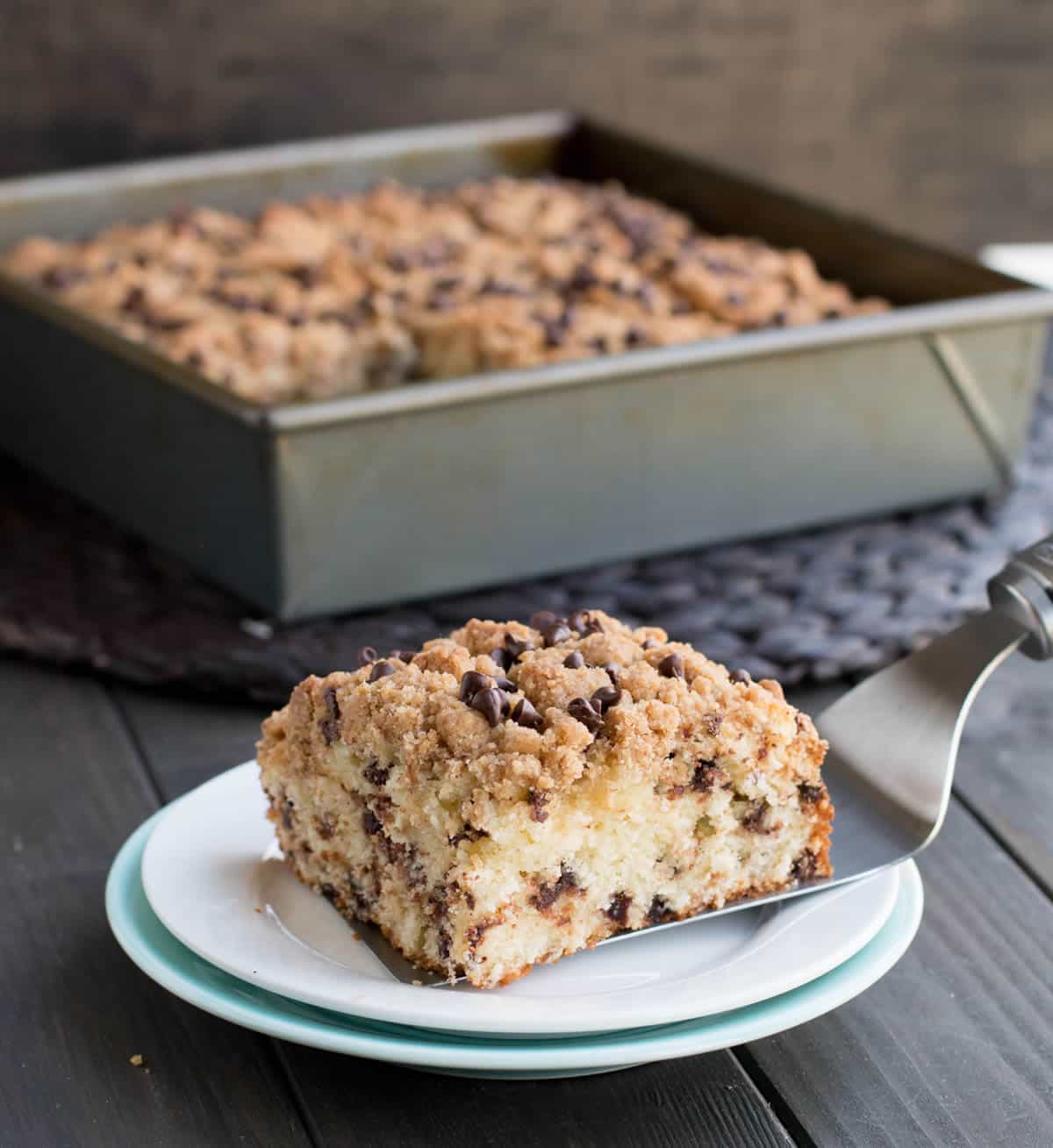 Everyone loved the flavor and the texture and the crumb topping. My husband had an interesting comment. He said the thing he loved about it was also the thing that he hated about it. The crumbs. He didn’t want to change a thing, but those crumbs! They were so…well…crumb-y!

There were rebel crumbs everywhere. They were delicious, but they escaped the top of the cake at every opportunity. I had made a finer, drier crumb; it had a sandy texture. Some crumbs stuck to the cake; many didn’t.

But everyone loved it so much, they didn’t want to change a thing. I told them to trust me. It wasn’t quite right and I could make it better. 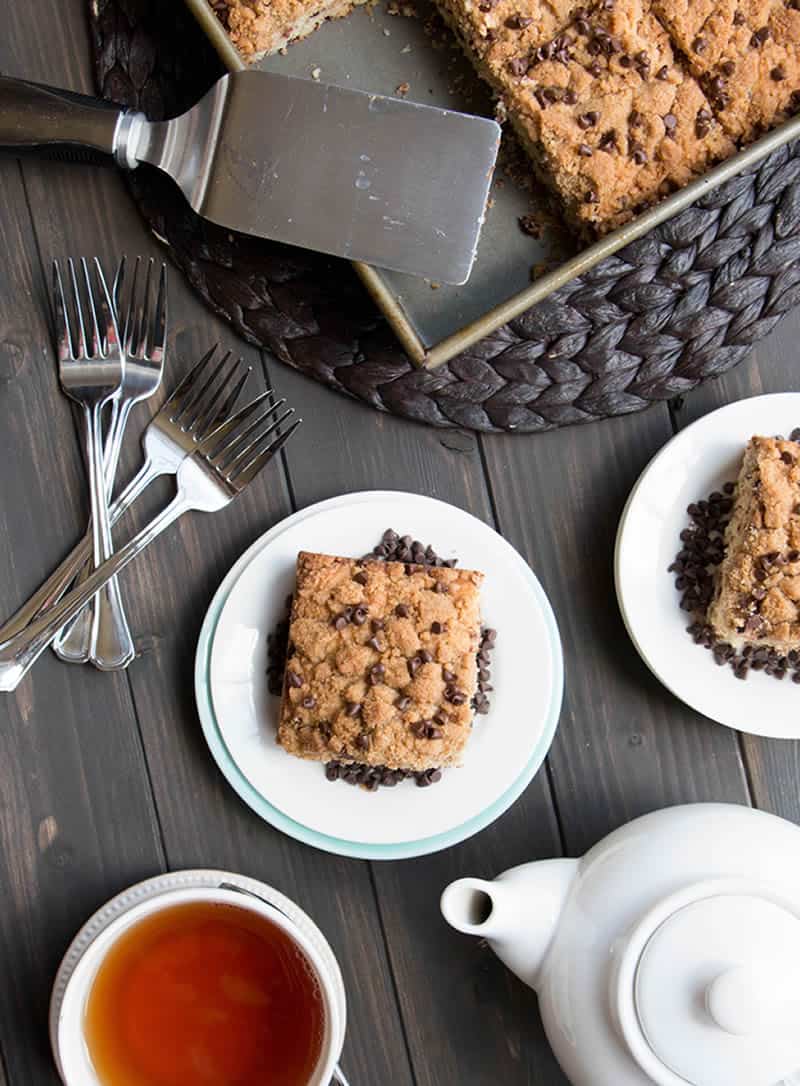 Sometimes the ratio of ingredients in a recipe needs to change. Sometimes it’s just the process. In the first batch, I considered making a crumb topping that would require cutting the butter into the sugar and flour mixture.

I don’t personally have an issue with that. That’s a regular step for me in most of my biscuit and scones recipes and it was how I made the crumb topping in the Egg Nog Crumb Muffins.

But, I thought I’d take another route, a short cut, for those of you who lament the cutting of butter into the flour mixture step. (Though I think you should embrace that process. I have too many delicious recipes that use it :)

So, for the first batch, I softened the butter in the microwave. I even let it melt a little. Basically, I just wanted it soft enough to easily mix in with the flour/sugar with simple stirring.

After it was mixed up, I scattered the sandy crumbs all over the top of the cake. Those were the rebel crumbs. 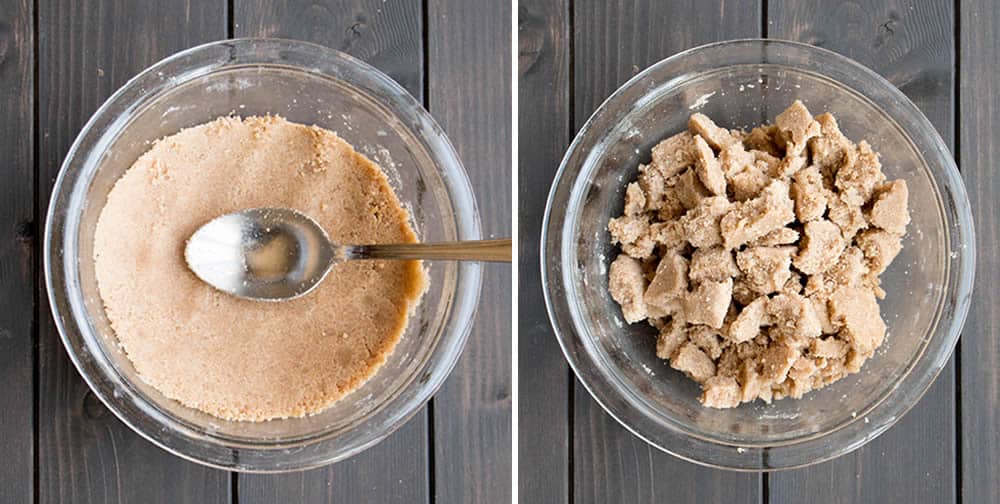 For the re-do, I thought I would melt the butter completely, then mix it in with the flour/sugar. It was much easier to coat all of the dry ingredients with melted butter. But I wanted bigger crumbs this time. One of Cook’s Illustrated recipes allows the melted butter to cool off so that you can break off bigger chunks.

I went with a similar philosophy. Once the melted butter was incorporate with the flour/sugar, I packed it down in the bowl. Then, I refrigerated it. I figured, if I liked cutting cold butter into crumbs, then I would simply let the butter get cold and solid again.

The result was big, beautiful chunks that held together perfectly. Now, I could have gone crazy and made a decadently thick crumb topping like you would see in a New York crumb cake. 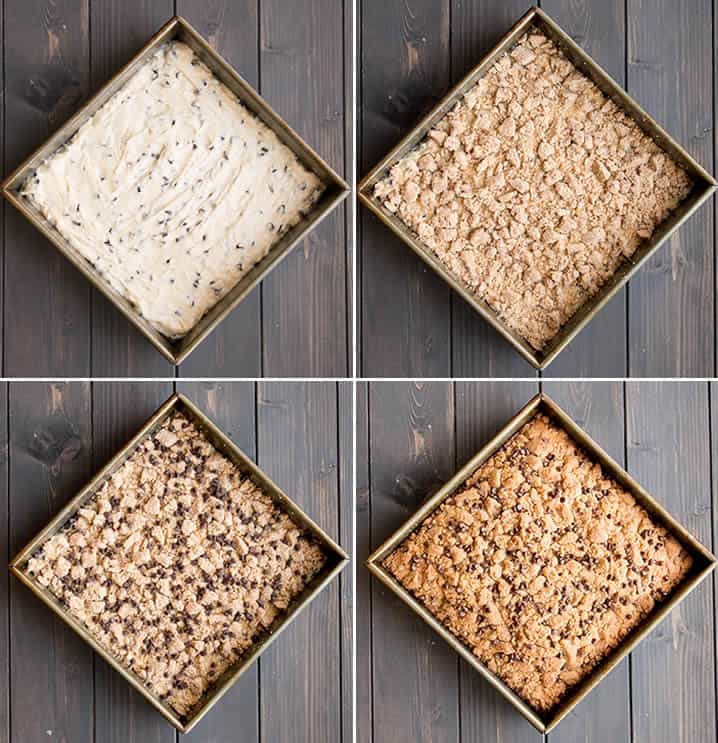 I decided to save that excess for another time and exercised some restraint with the amount of crumbs. After all, we didn’t want to detract too much from the chocolate. In our production today, chocolate is not an extra, it’s an important supporting actor, remember?

Can’t let the star of the show overshadow the performance of the rest of the cast, can we?

(Full disclosure, one of my taste testers really LOVED the rebel crumbs. Check the recipe notes if you’d prefer a sandier crumb.)

Time to get back to the cake. I had some ingredient ratio issues. The first version was too dense, too rich. Yes, everyone loved it, but I didn’t think it was exactly what I was looking for.

It was kind of like pound cake but with a little too much moisture. I reduced my egg and sour cream amounts and added a bit of milk to make up for some of the liquid I was losing. 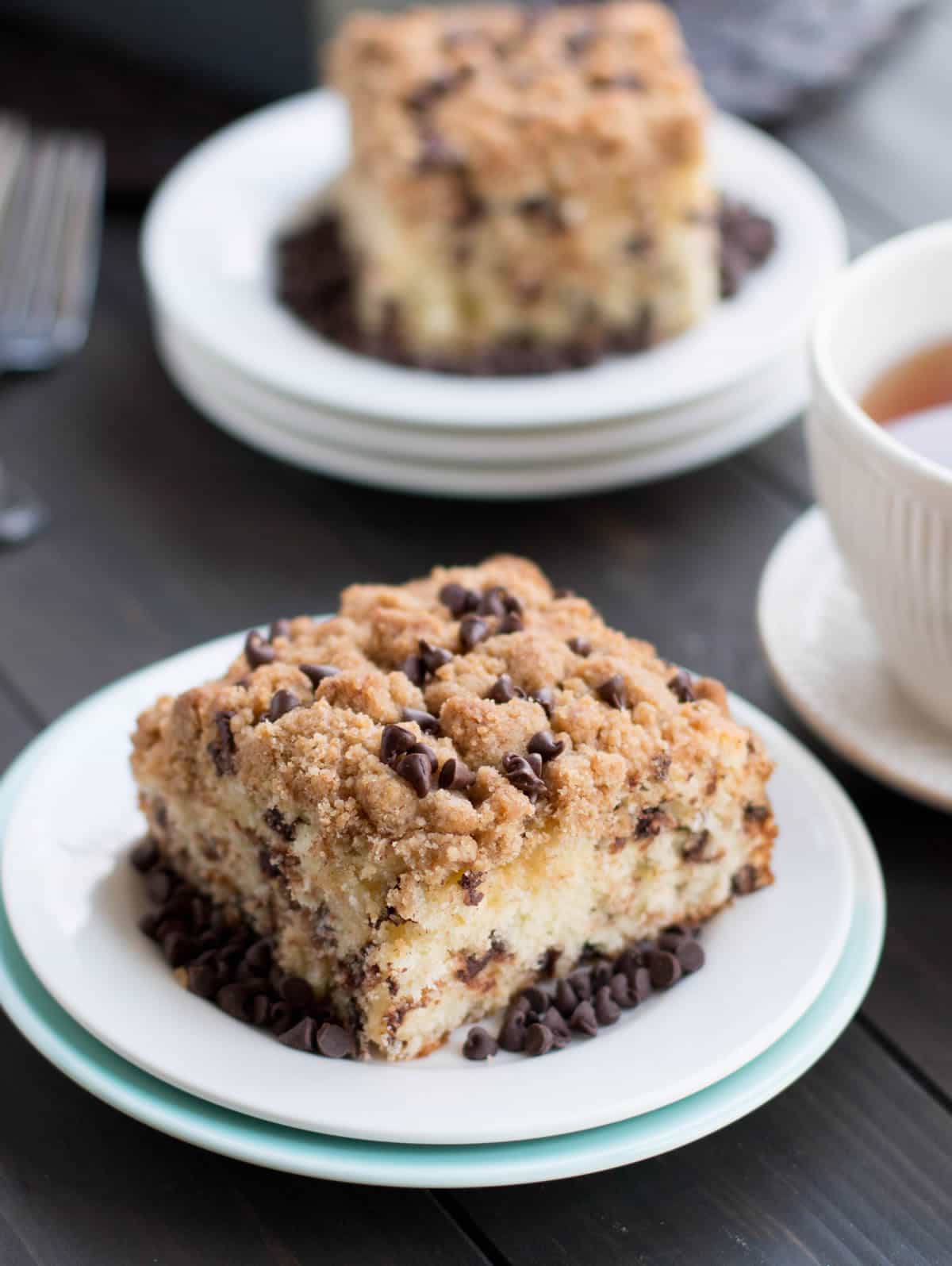 Another issue was I didn’t use enough salt in the first version. If you don’t have enough salt, the sweet just tastes…off. Salt is critical in getting the right flavor balance. A little more salt brought the whole thing back to center for me.

Then there was the sweet. I usually try to reduce sugar in my recipes since I find that, often, too much sugar masks the flavor. But it’s tricky business since sugar doesn’t just play a role in sweetness. It also plays a role in tenderness and leavening.

I had reduced the sugar in version one, but then the semi sweet chocolate chips didn’t balance properly with a less sweet cake. So, I increased the sugar a little. Just enough to be a good, balanced partner to the chips. 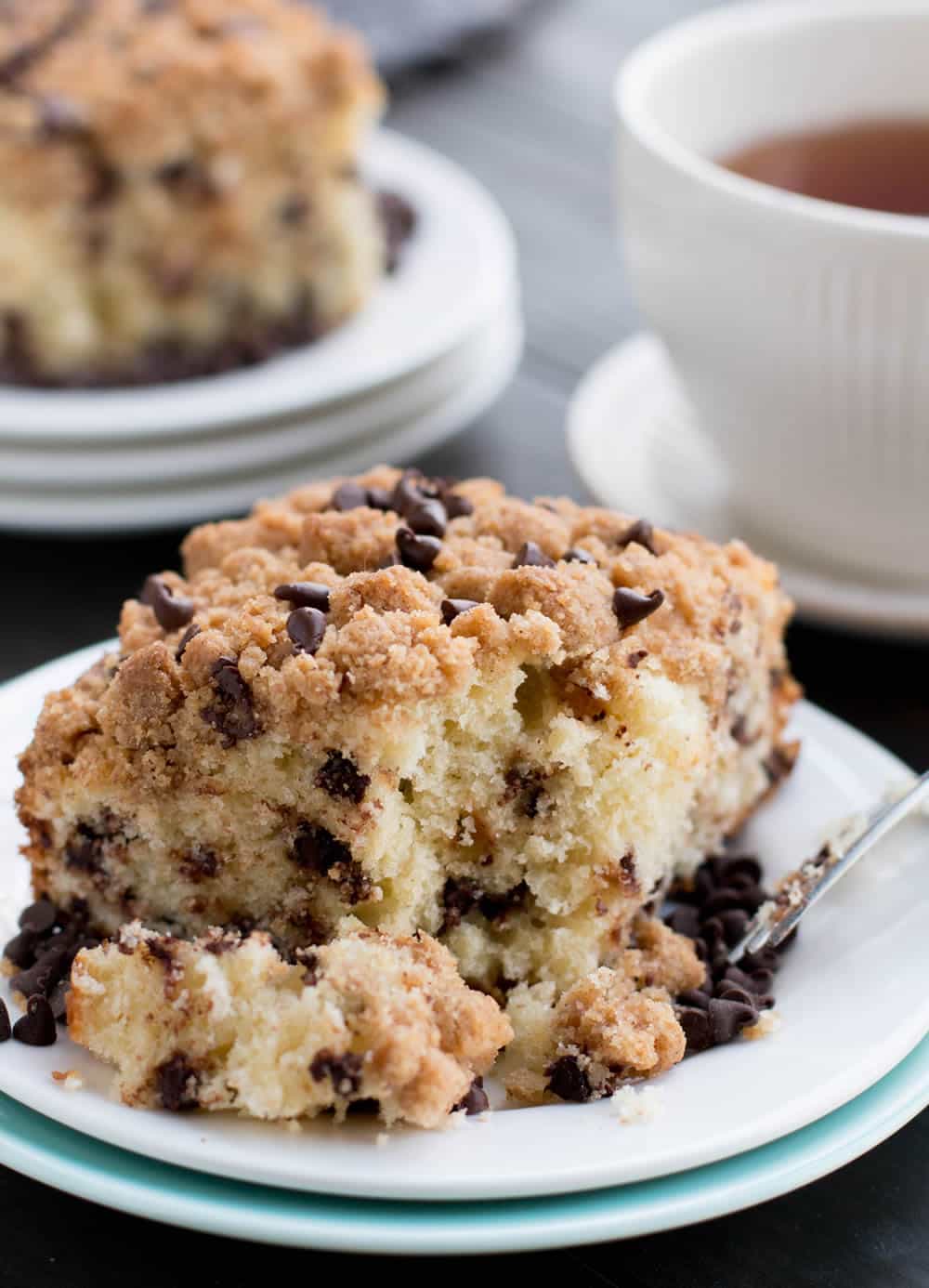 I crossed my fingers and hoped that changing all of those variables would solve the issues I found. I hoped that all of my testers who said they didn’t want me to change a thing would love the second version as much as or more than the first.

I loved the second version. And, as I often like to point out to you, I thought it was actually better on day 2. You know what that means? This Chocolate Chip Crumb Cake can be made the day before you serve it, freeing you up in the morning to just sit back and enjoy it. 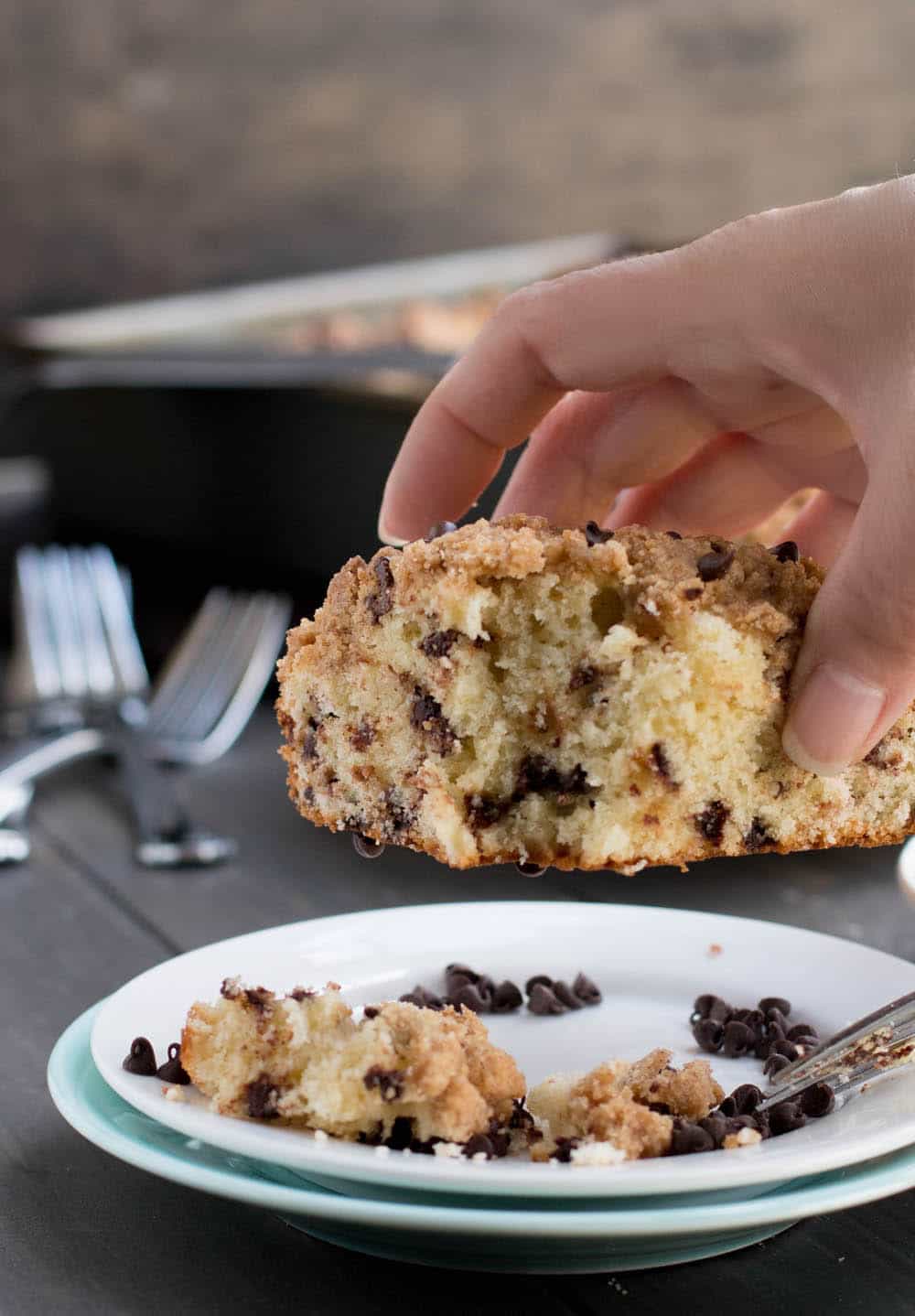 After sampling this a few times, I’m really not sure if there is just one star. Is it the cake? The chocolate? The crumb? They all play important roles. However, once you make it, you’re the producer. Chocolate Chip Crumb Cake simply doesn’t get made without the producer, does it? So, go on…make it. 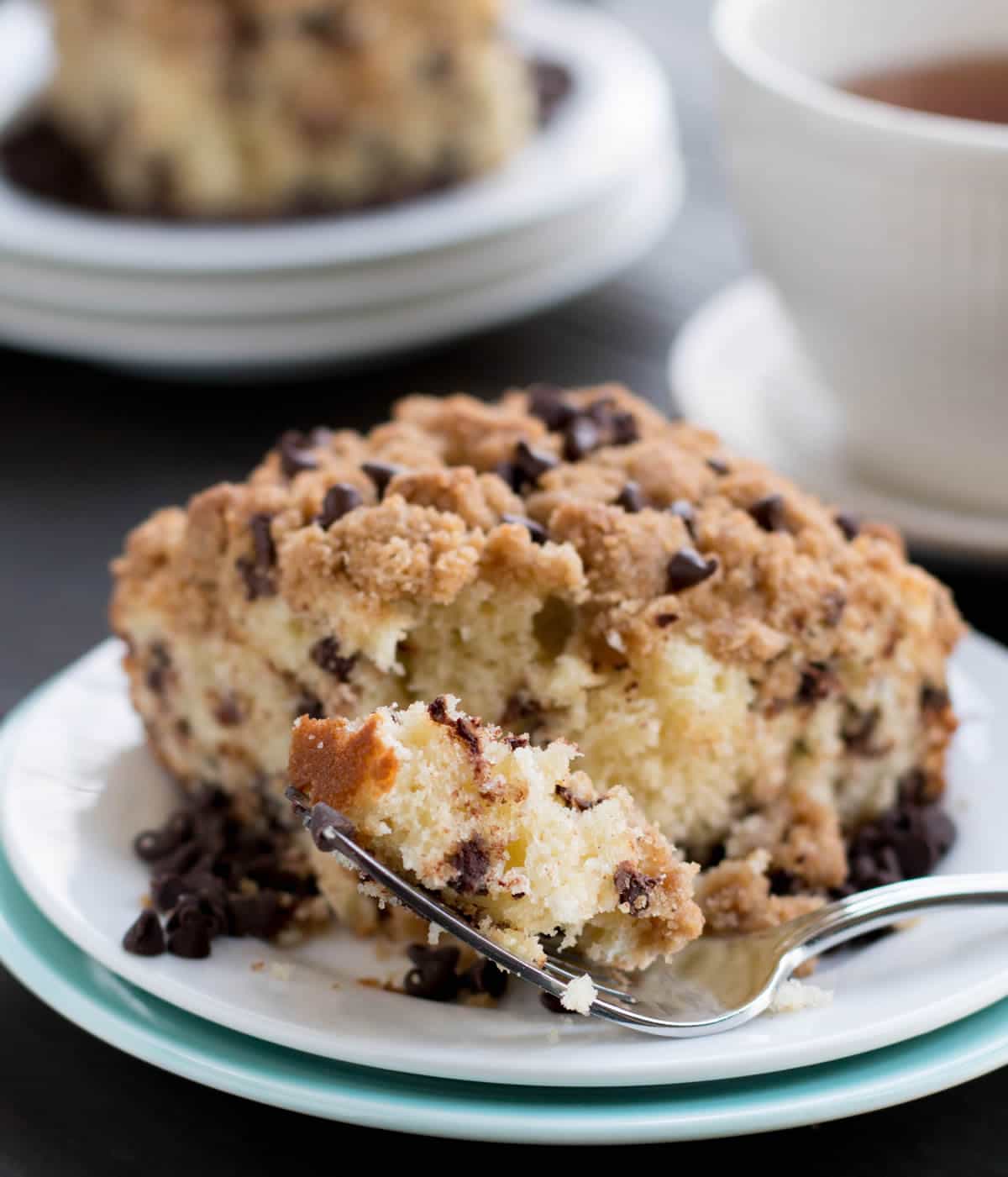 For the crumb topping:

* If you're not a moist New York crumb kind of person, and would prefer a drier, sandier crumb, don't melt your butter completely. Just soften it and then work it into your flour/sugar mixture. Hands work the best for this. Don't form large crumbs. Keep the mixture kind of sandy, but press the mixture together to form some larger bits of crumb. Then, don't let it sit. Don't refrigerate it. Go ahead and sprinkle it evenly over the batter.

*I find it takes too long to allow sour cream and milk to come completely to room temperature by themselves. For this recipe, I whisk the two together and allow to sit at room temperature for 30 minutes. Then, I use the microwave to take the chill off for about 10 seconds. Stir, then check. If the mixture is still cool, I'll give it another 10 seconds or just enough to bring it to room temperature. If it's cold, it will resolidify the butter in the cake batter. If it's warm it will melt the butter. You can just use the microwave to bring the mixture to temperature, but I prefer to take it out of the refrigerator for a bit to give it a head start.

*Once the cake has cooled, you can also sprinkle the top with confectioner's sugar for a little extra sweetness and a pretty presentation.

I made this cake today but cut the recipe in half and baked it in a 6 inch round pan. It was enough for 4 generous pieces and ate it while still a little warm. Sooo good! The cake itself is fluffy, tender and moist and the sour cream is just what does it. I reduced the chocolate chips to a little under 1/2 cup for the cake and about 1 1/2 Tbsp. for the topping. The crumb topping held together well and the tip for putting it in the fridge first is a definite step you don't want to skip. Most were firm and crisp and others crumbly when cut into. This is a definite 10 out of 10 recipe. I recommend everyone try it . Thank you so much for posting it, you did a great job!

Maureen, I bet the 6" cake was adorable! Perfect portion for 4! I love that it worked out so well for you. Thanks for such lovely feedback :)

Thank you very very much for this perfect coffee cake recipe! I loved it so much I shared your recipe on our blog Flaky Bakers today. Outstanding recipe!

Happy to hear you enjoyed it!

I have the same wide eyed face as the surprised emoji on my phone. This is beautiful fusion of chocolate chip cookie + crumb cake! <3

Jessie, I've made this cake twice since the post. Everybody LOVES it!

I feel that cake for breakfast seems more legitimate when the cake is in loaf form.. Something about the slices haha

Thanks Emilie! We really loved it!