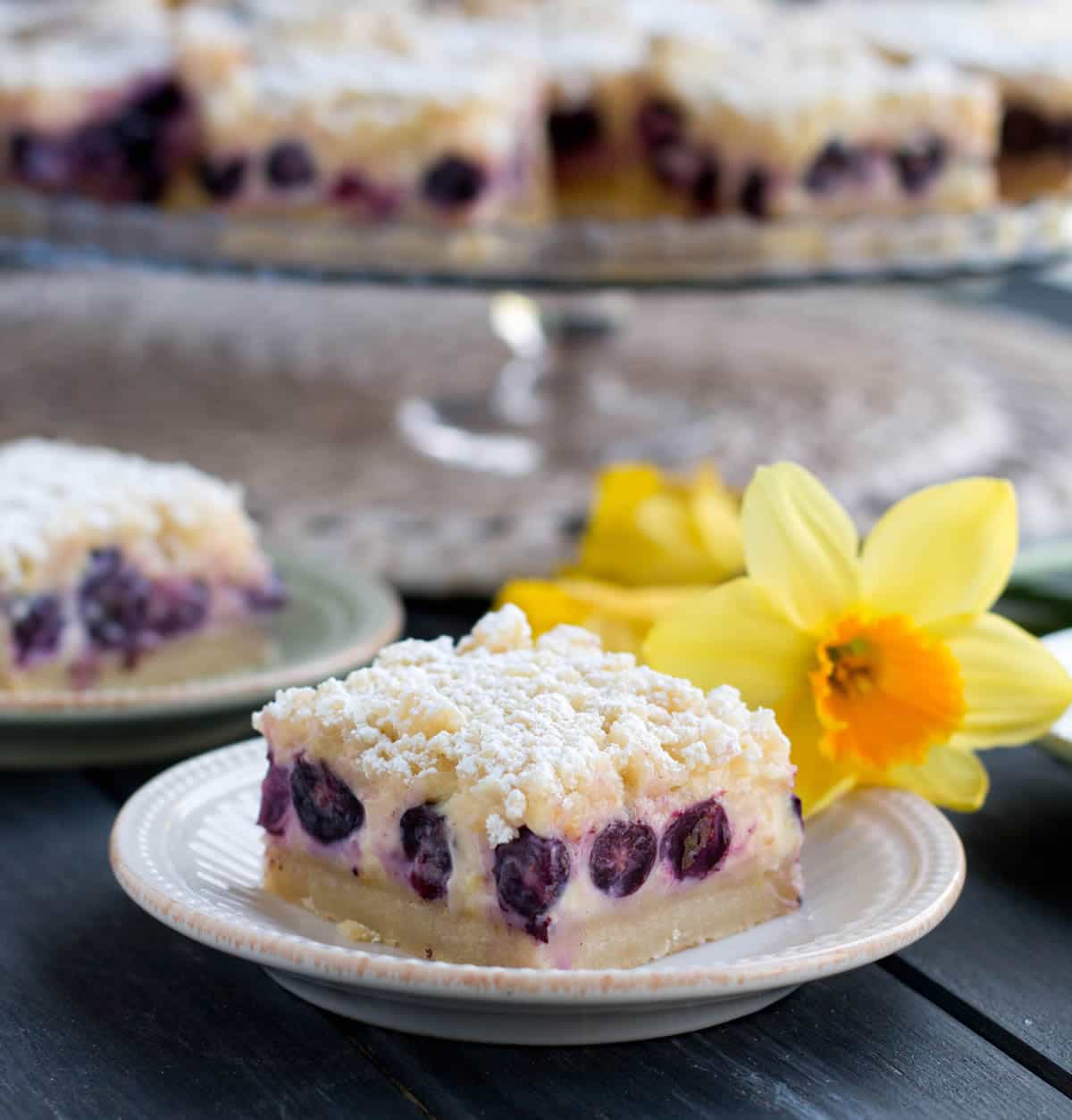 I’ve had some lemon features on my home page and posted a new Lemon Blueberry Cheesecake Dip. It’s clear I have a love for lemon and I’ve continued to think about lemons…

Then there’s the crumb situation…After the last piece of Chocolate Chip Crumb Cake was consumed, I was still craving crumbs, or more specifically, crumb topping. 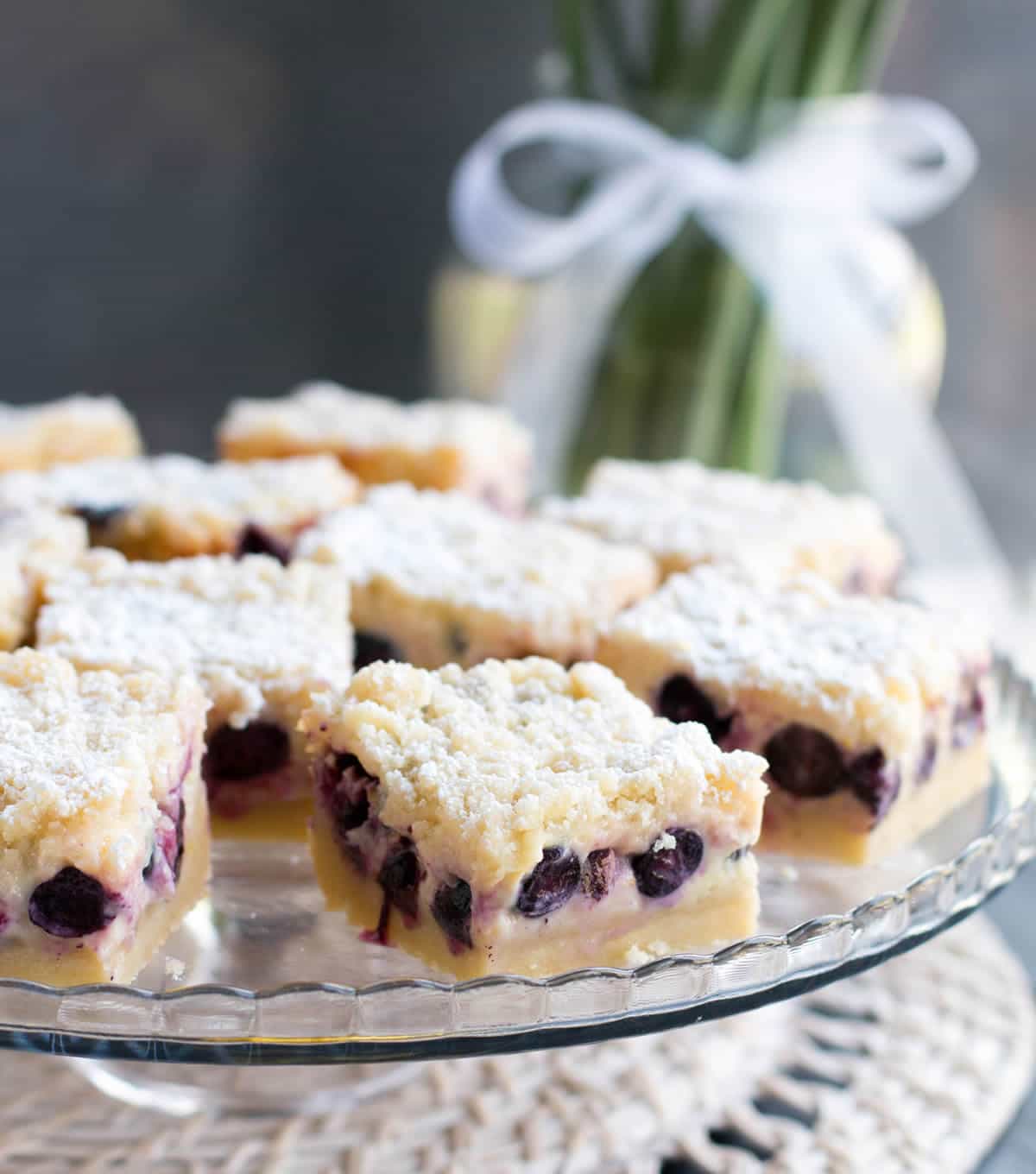 The last piece of this puzzle came when a good friend was recently recuperating at home. I knew she had a fondness for some lemon cream crumb bars from a recipe I had made for her a few years ago. 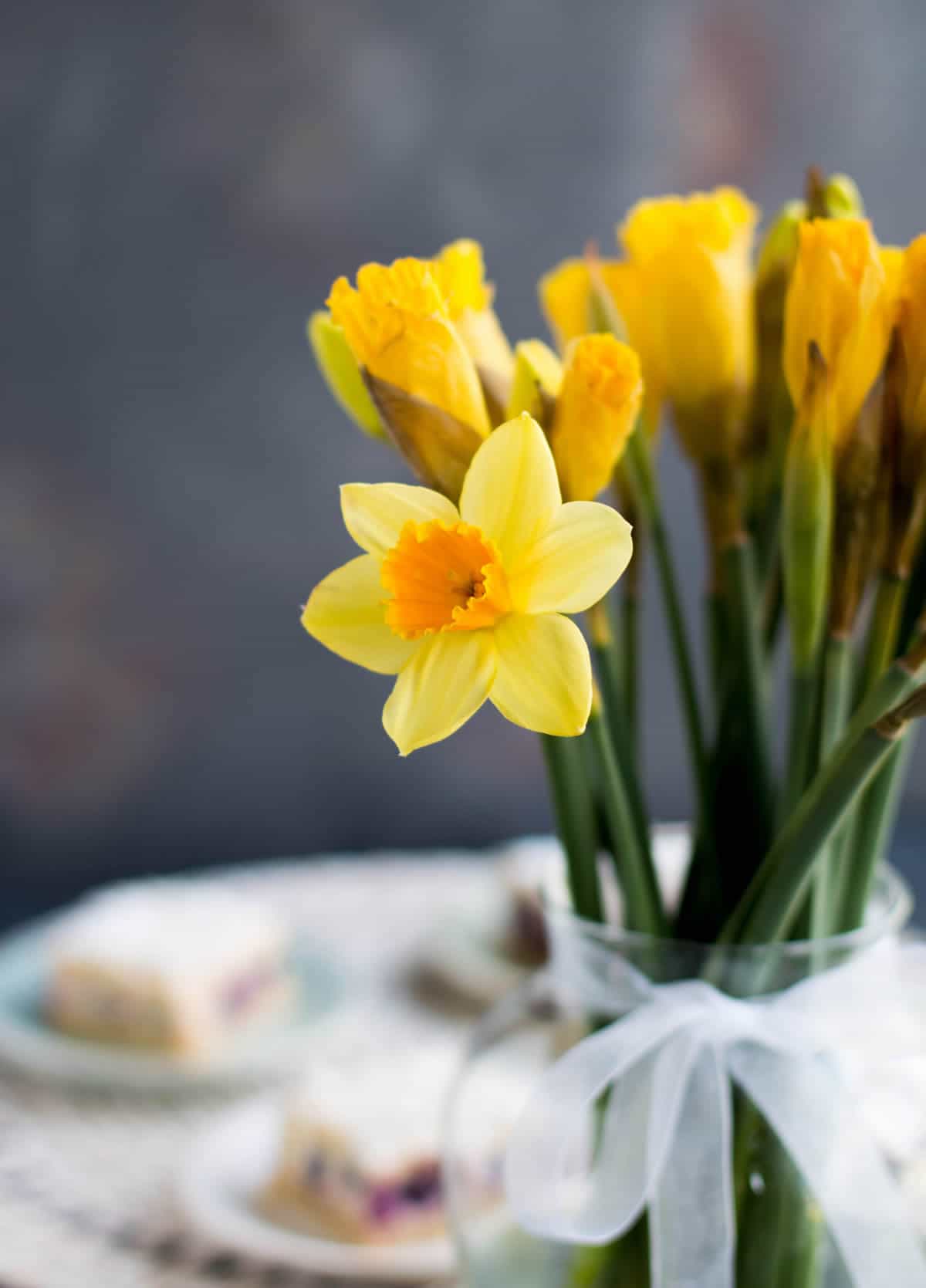 I started with the shortbread base that I created for Millionaire Magic Bars. It’s a delicious base for a bar. It’s softer than traditional shortbread and perfect if you want more moisture in your base.

I was wrestling with whether or not I should cut the shortbread recipe in half and make a thinner crust. If I cut the recipe in half, I was going to have to divide an egg and use half of it. That’s not hard, but I wasn’t in the mood to post a recipe with half an egg in it, so I decided to go big and see where it led me. I parbaked the crust and moved on. 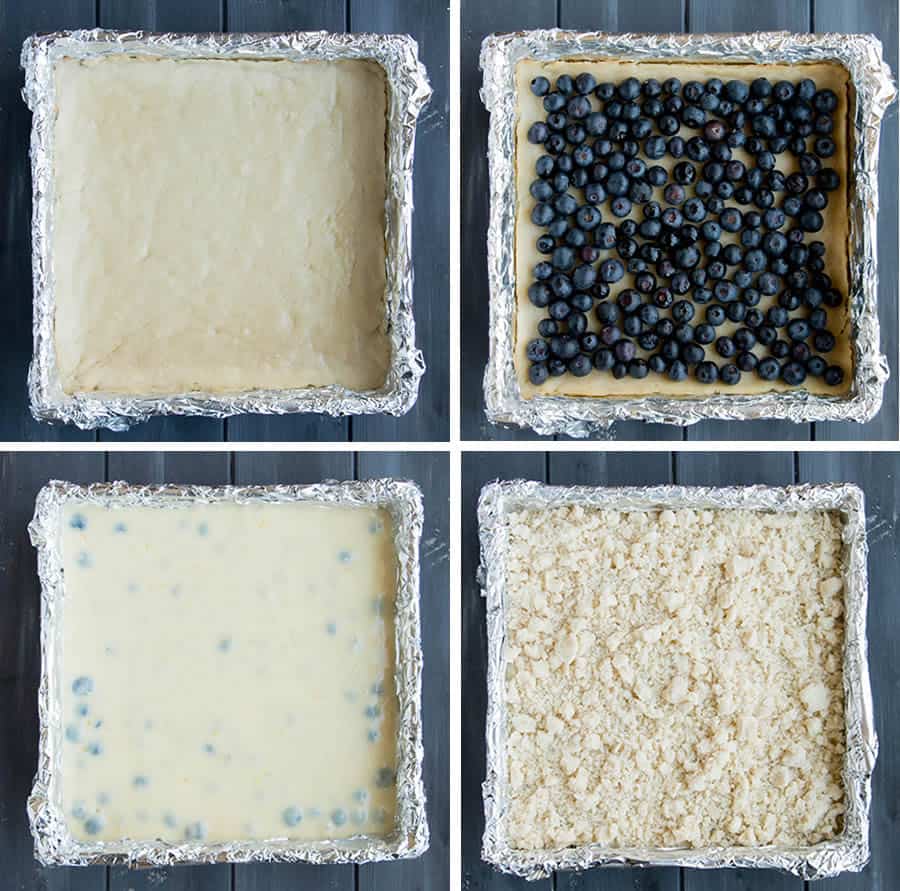 Next up, the filling. I wanted a pie-like filling, something creamy, like you might find in a lemon tart. Sweetened condensed milk is the magic behind such a filling.

And, with just a few extra ingredients stirred into it, you quickly and easily get a lovely lemon custard. I went with a full 2 Tablespoons of lemon zest in the filling. I wanted to insure the lemon flavor was front and center.

That was supposed to be it for the filling. Just the lemon custard. Until I happened upon some nice, plump, fresh organic blueberries. They’ve been a bit difficult to find this year, what with all the crazy weather conditions affecting the harvest. 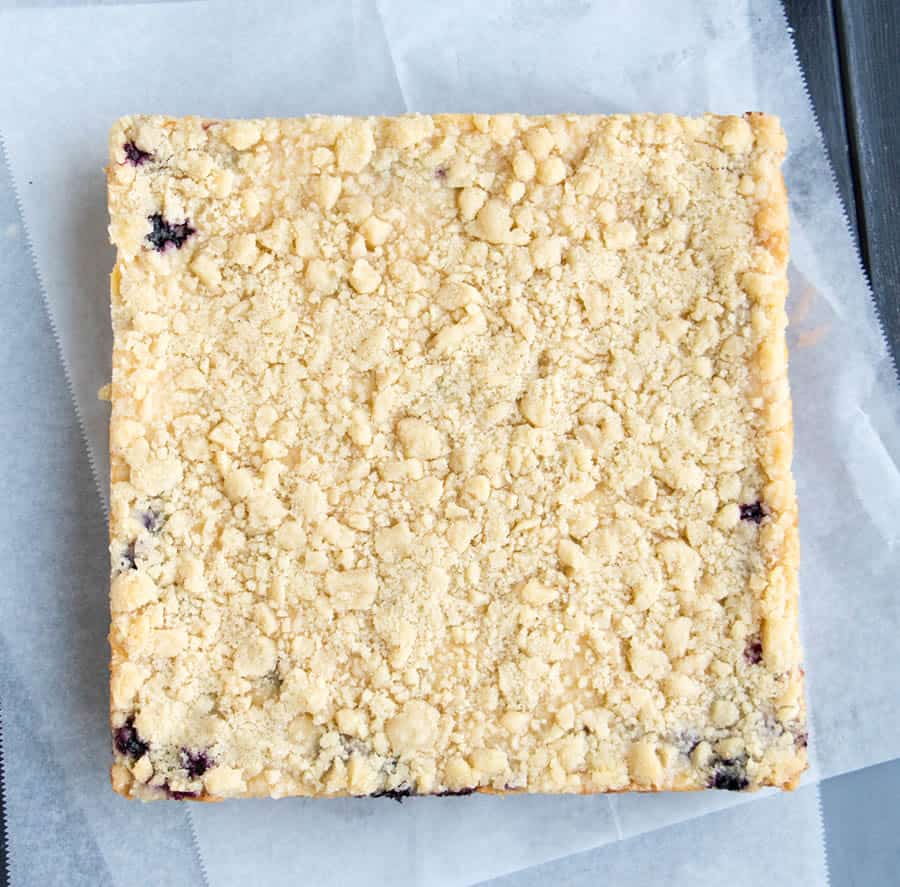 What to do? What to do? I had really planned on simple lemon cream crumb bars, but those blueberries won me over. Fine. I decided to add blueberries. I scattered them on top of the par baked crust and then poured the lemon custard over all.

Now for the crumb topping…I went with the crumb topping I made for the Chocolate Chip Crumb Cake with three changes…First, I used white sugar instead of brown sugar. I didn’t want that extra note of molasses in these bars. I wanted a cleaner crumb flavor. And, I wanted a nice light colored crumb. 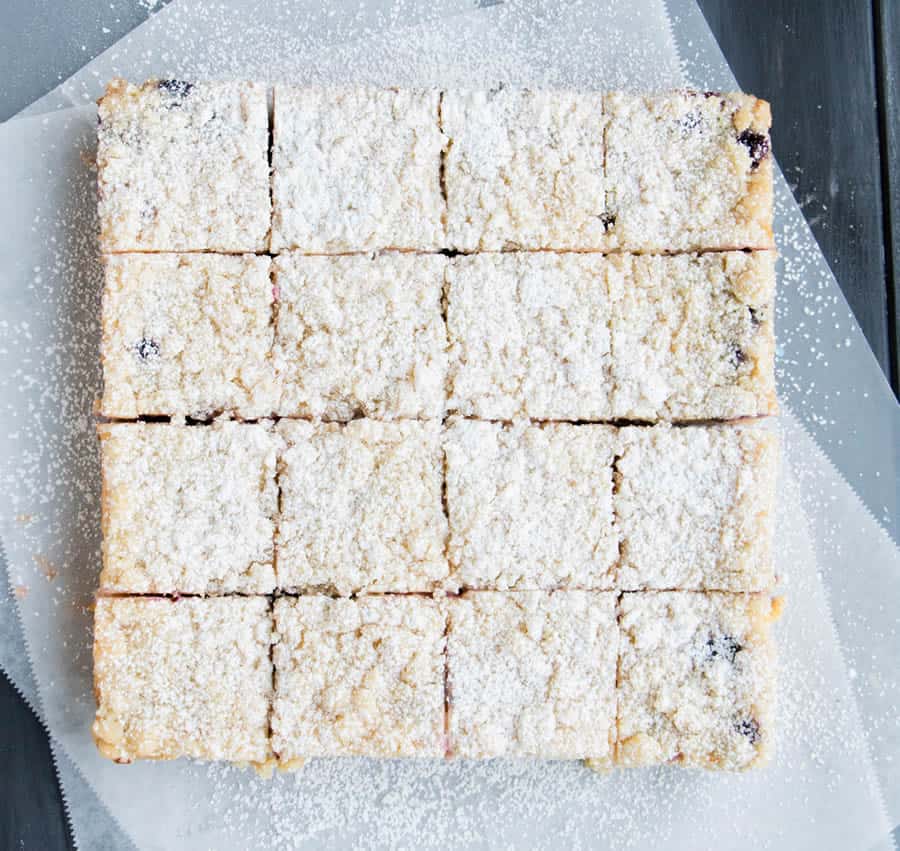 Second, I didn’t use melted butter. That’s right. I gave you the easy way out with that last recipe. It had a moist New York kind of crumb. I didn’t want a moist crumb for this bar. I already had a soft base with the shortbread. I needed some textural difference for the topping. 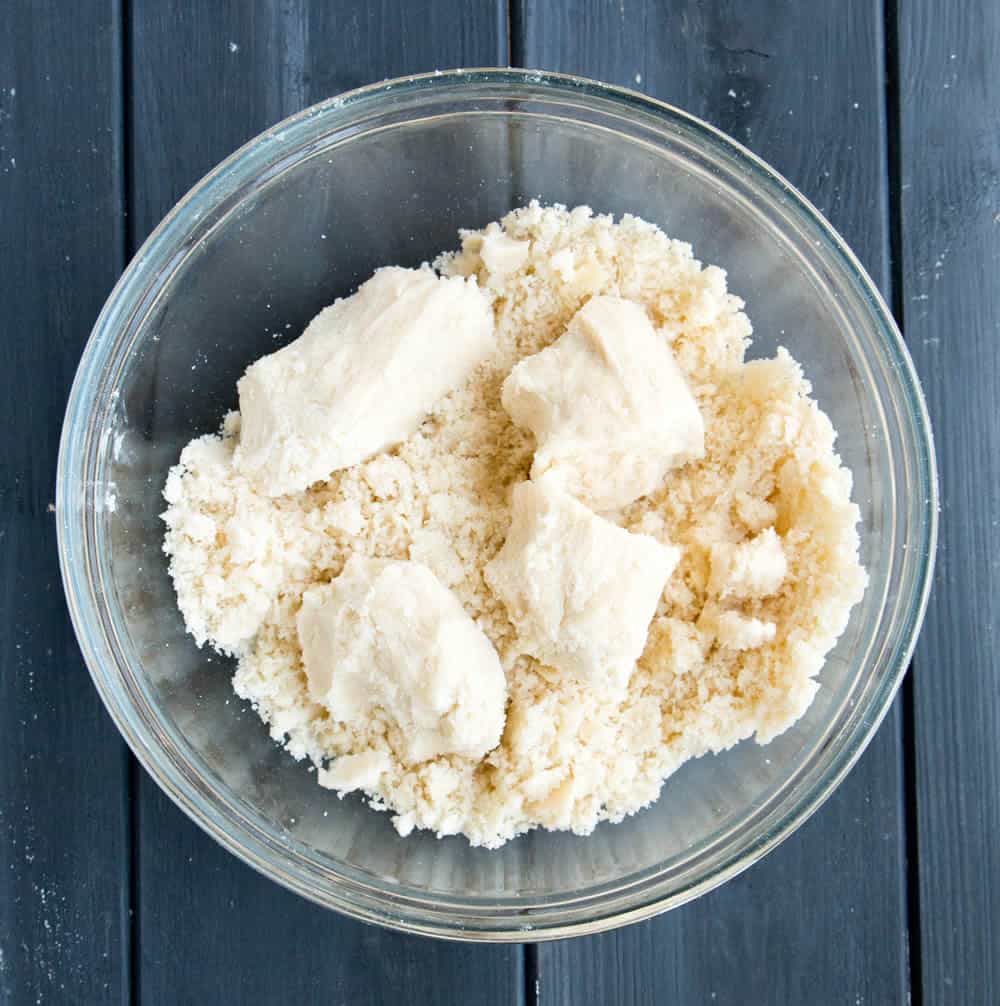 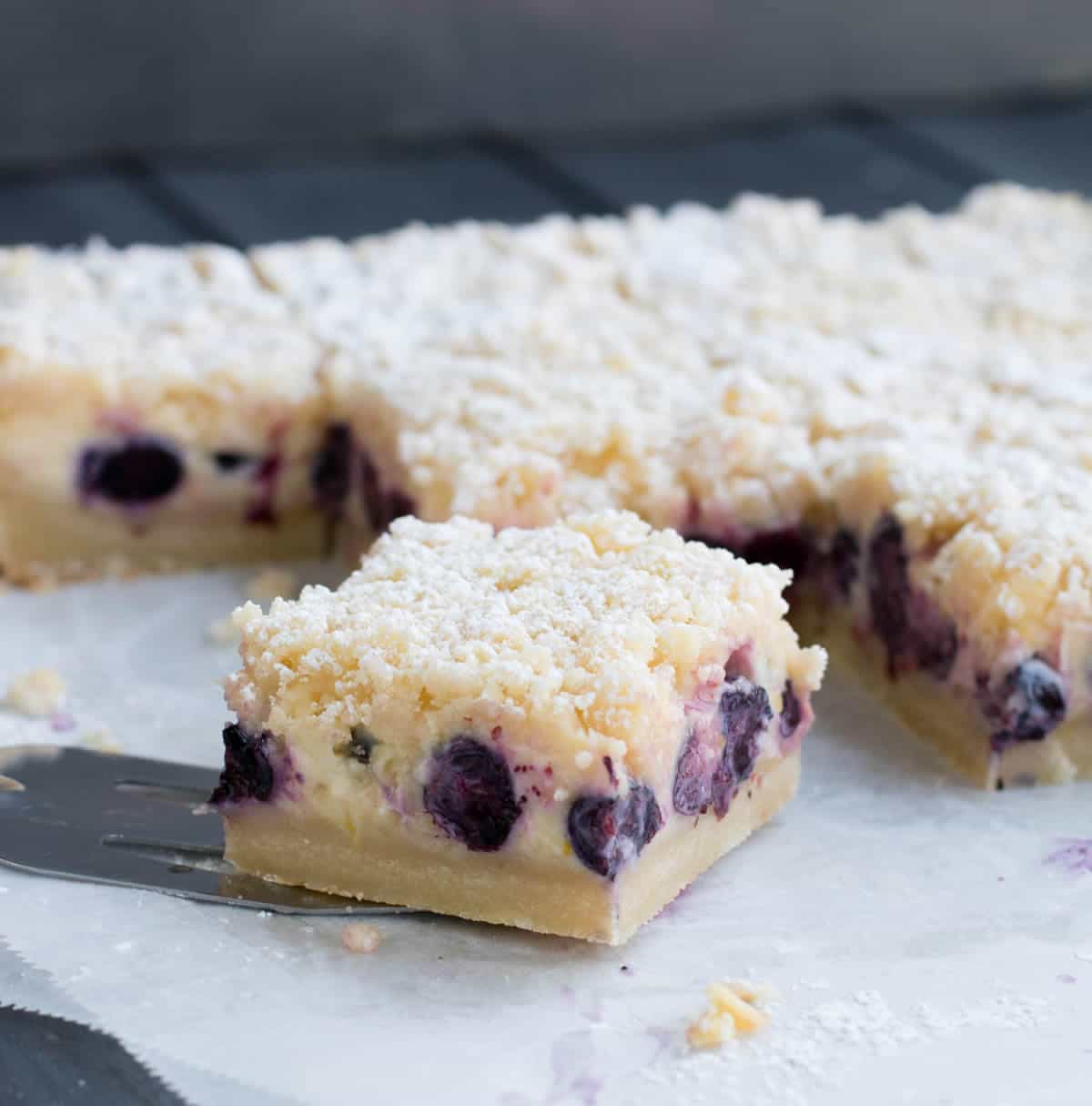 Third, and this part is optional, I added lemon juice powder. I talk all about this ingredient in one of my favorites posts. I’m loving real fruit powders. It’s a wonderful way to punch up fruity flavors in recipes where a juicy fruit won’t work quite so well. I used raspberry powder in these sugar cookies and the flavor was fantastic. They taste like real fruit because, well, they are real fruit.

I’ve mentioned before that I would add lemon juice powder to many of my posted lemon recipes save for the fact that it’s not a standard pantry item for most of you. 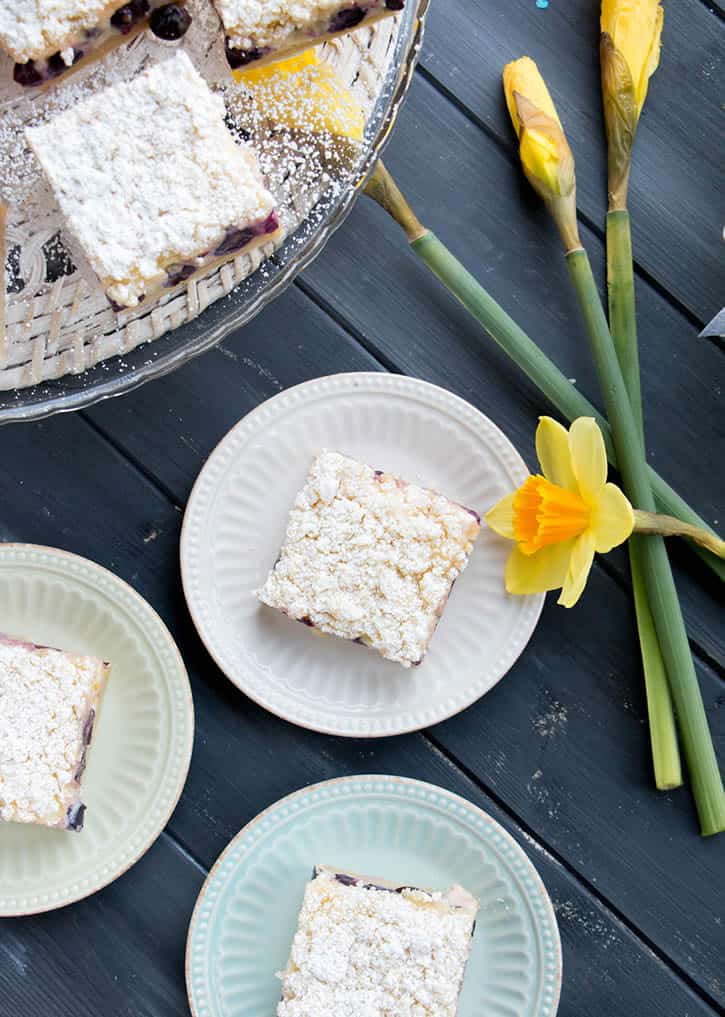 After these bars come out of the oven, you’re going to have to exercise some patience. They need to completely cool and then refrigerate to set up further, similar to how cheesecake needs to have its time to set up.

Once cool, the bars are easily lifted up and out of the pan by the foil lining that I advise you to use in the recipe. Then, I used a serrated edged knife to cut them. This keeps the crumbs on the top of the bar instead of getting pushed into the bar as can happen with a non-serrated edge.

It also prevents your berries from getting crushed. Use the sawing motion just to get through the crust and the filling. Once you hit the bottom crust, you can add pressure and cut right through. 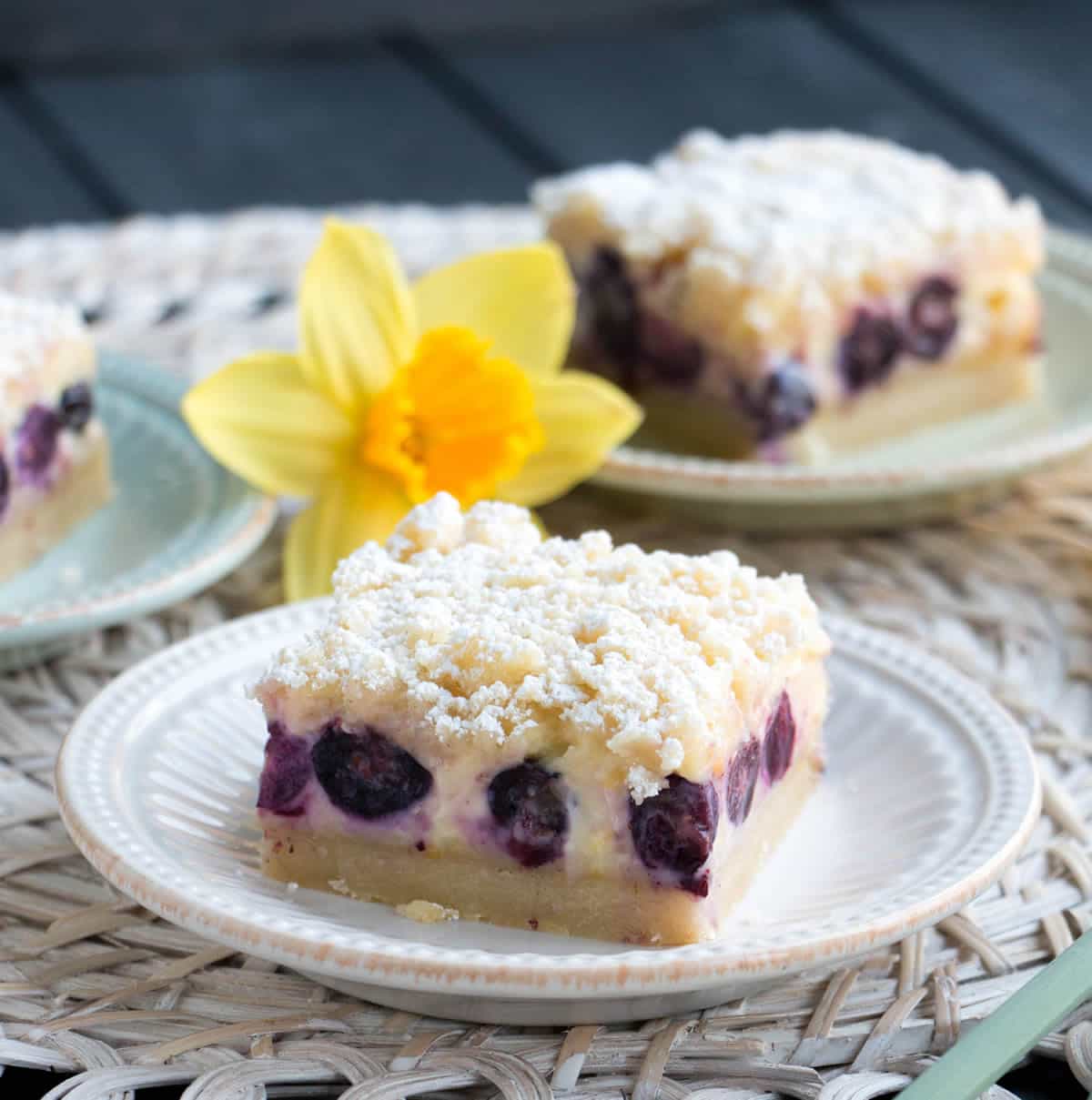 The bar was a hit for everyone, except for me, the one who was still questioning whether or not I should have made a thinner crust. Or, if I was happy with what all my various components ended up as once they became a whole.

Because, what I made, wasn’t anything like the lemon cream crumb bar that I had made for my friend. It was a Whole. Different. Thing. Not really a crumb bar, kinda like a pie…except, kinda not.

As far as the shortbread, hands down everyone liked it thick. Amount of lemon flavor? Not too tart and not too sweet, and plenty of lemon flavor without being overpowering. Juicy blueberries? Check. No one would change a thing. Crumb topping? Forget it. Crumb topped anything in any form is a go with this crew. 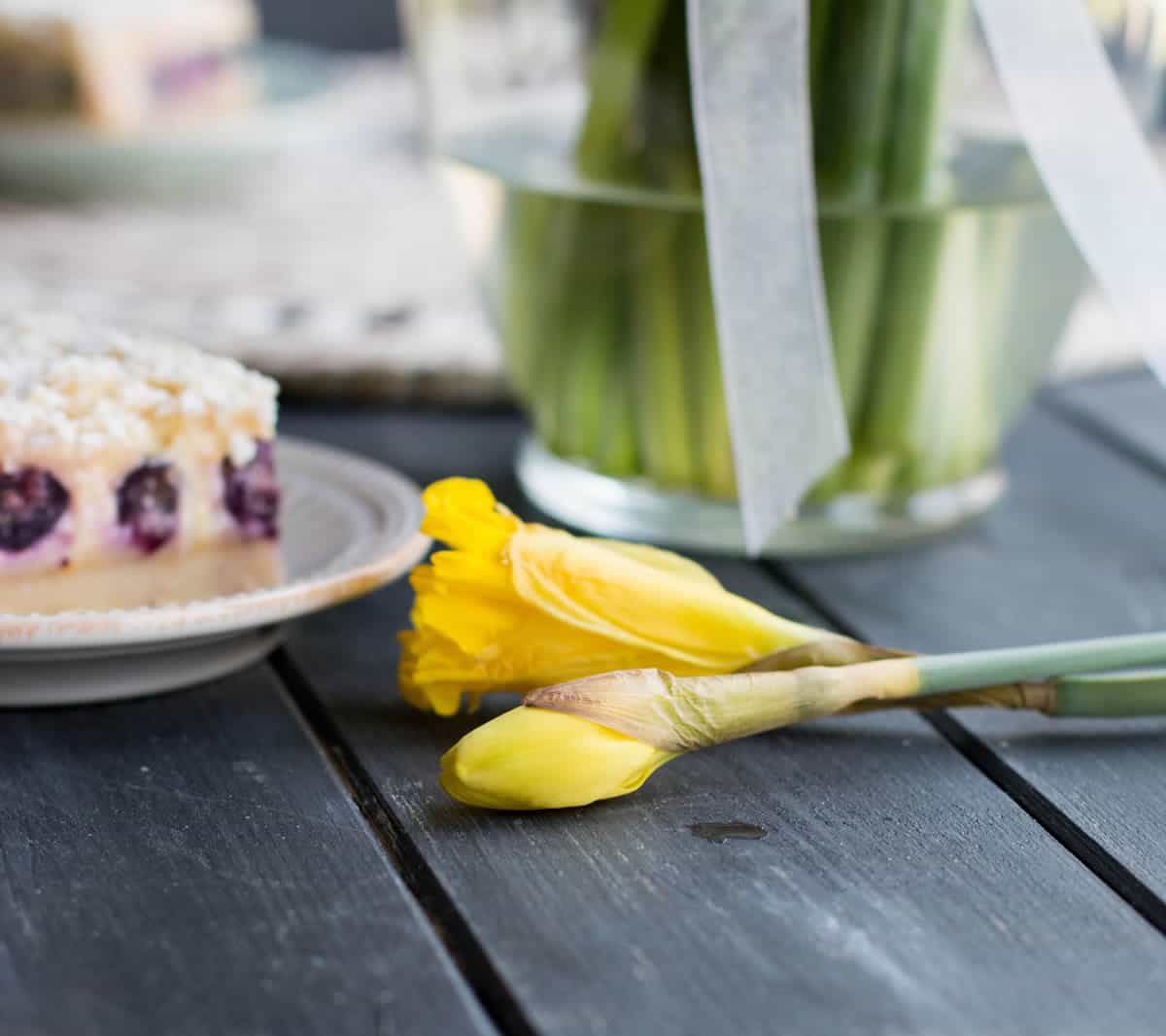 So what was my problem? I guess I didn’t end up with what I had started out to create. These weren’t lemon cream crumb bars. They were Lemon Blueberry Shortbread Bars. Because of the thick, soft, buttery crust, the shortbread is the most prominent thing about these bars. Everything else is like a bunch of wonderfully delicious accessories to the shortbread, crumbs included. 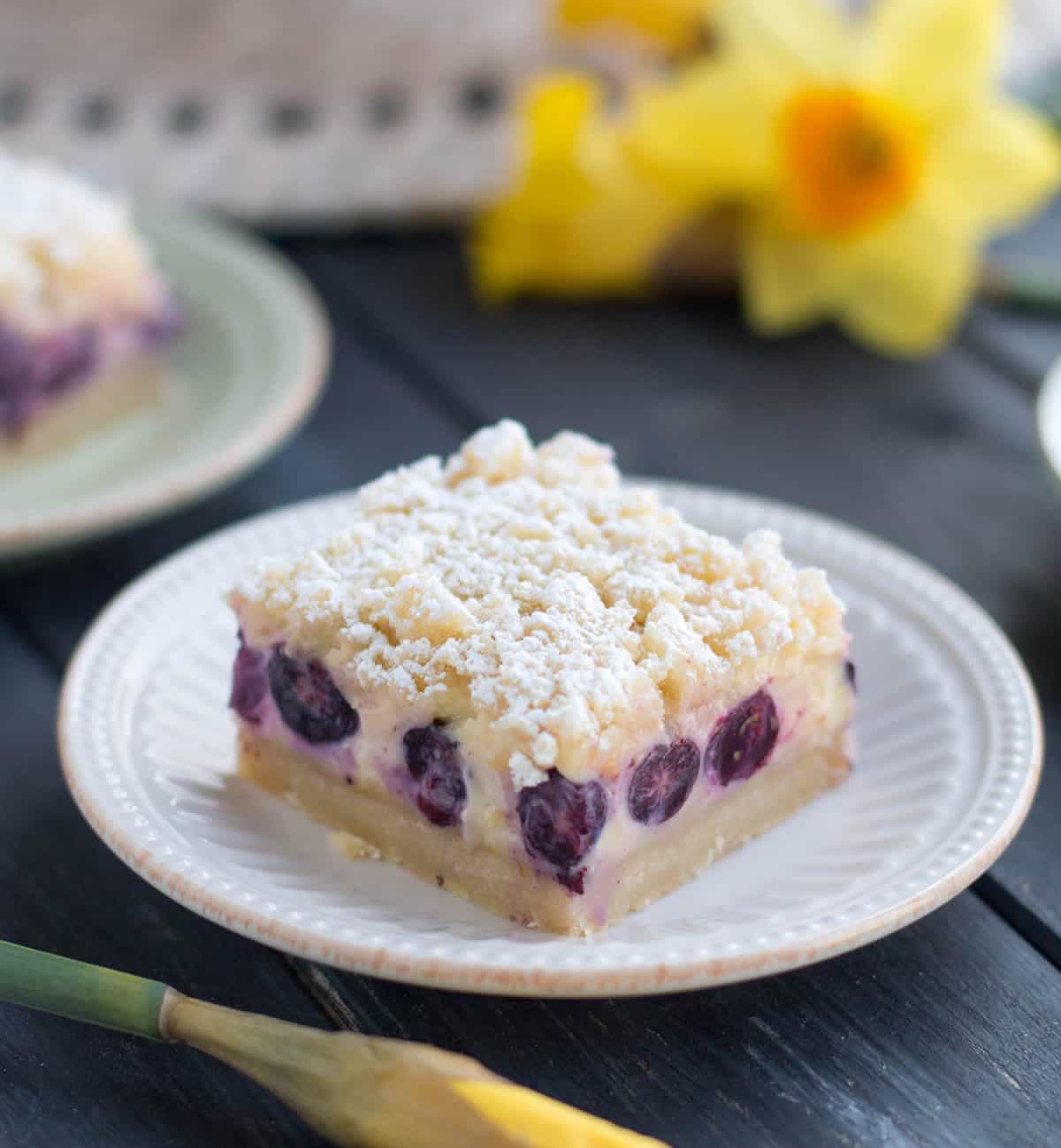 Okay, then. I made Lemon Blueberry Shortbread Bars. I’ve come through the acceptance curve. And while I probably won’t be able to hold back from trying different versions of the crust and filling when I make them in the future, (which is an ongoing issue with any recipe I develop) I embrace this version whole heartedly. 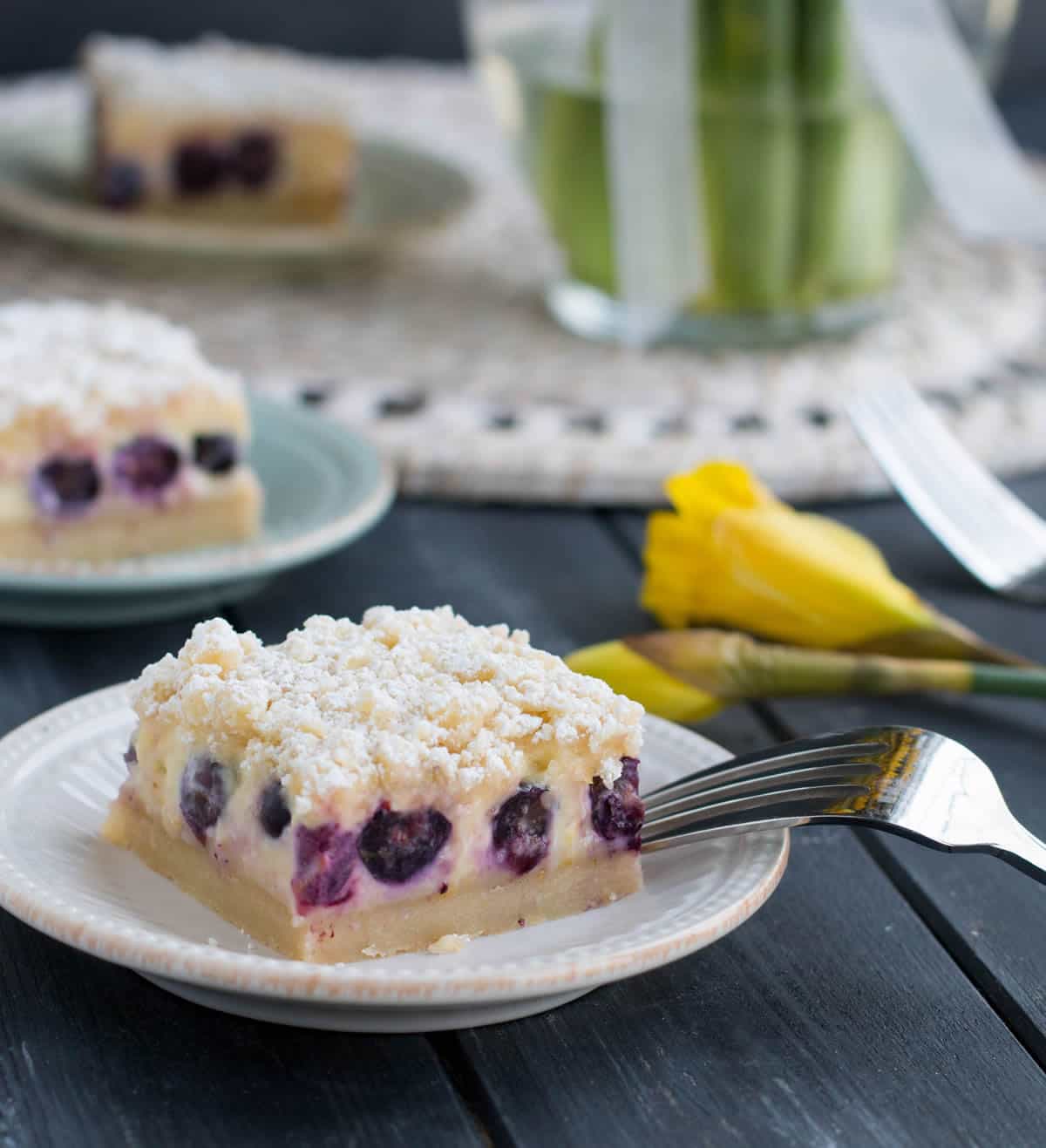 For the shortbread crust:

For the lemon crumb topping:

To garnish before serving:

*Always remember to zest your lemons before juicing them.

*If you don't have lemon powder to add to your crumb topping but would still like that lemon flavor, just add the zest of one lemon to the topping mixture before you work in the butter.

*I baked mine about 30 minutes. I would probably push it another 5 minutes the next time.

*If you want to try a thinner crust, go ahead and cut that part of the recipe in half. To cut the egg in half, just lightly beat one egg and then take about 2 Tablespoons out for the recipe.

*I would not use an 8" square pan unless you cut the crust recipe in half.

These were delicious - my family LOVED them. I accidentally used an 8 x 8" pan the first time and although it worked, they were very very thick and slightly undercooked. The second time I made them, I used a 7 x 11" pan (I don't have a 9 x 9" pan, so was trying to find something that would work in a pinch), that worked much better, BUT I needed to cook the shortbread in the beginning for just a little bit longer (about 5-7min). Really great! Thank you!

Claudia, for so long, I didn't have a 7 x 11 pan and was always a bit frustrated when I came upon a recipe that called for one. I finally went out and bought one years ago so that I wouldn't be without that size. It's funny that that's the pan you have! In any case, 7 x 11 gives you 77 square inches vs. the 9 x 9 which gives you 81 inches. It's so close and a great sub for a 9 x 9. Thanks for sticking with the recipe and figuring out how to alter it for a different sized pan. I'm so glad it worked out for you!