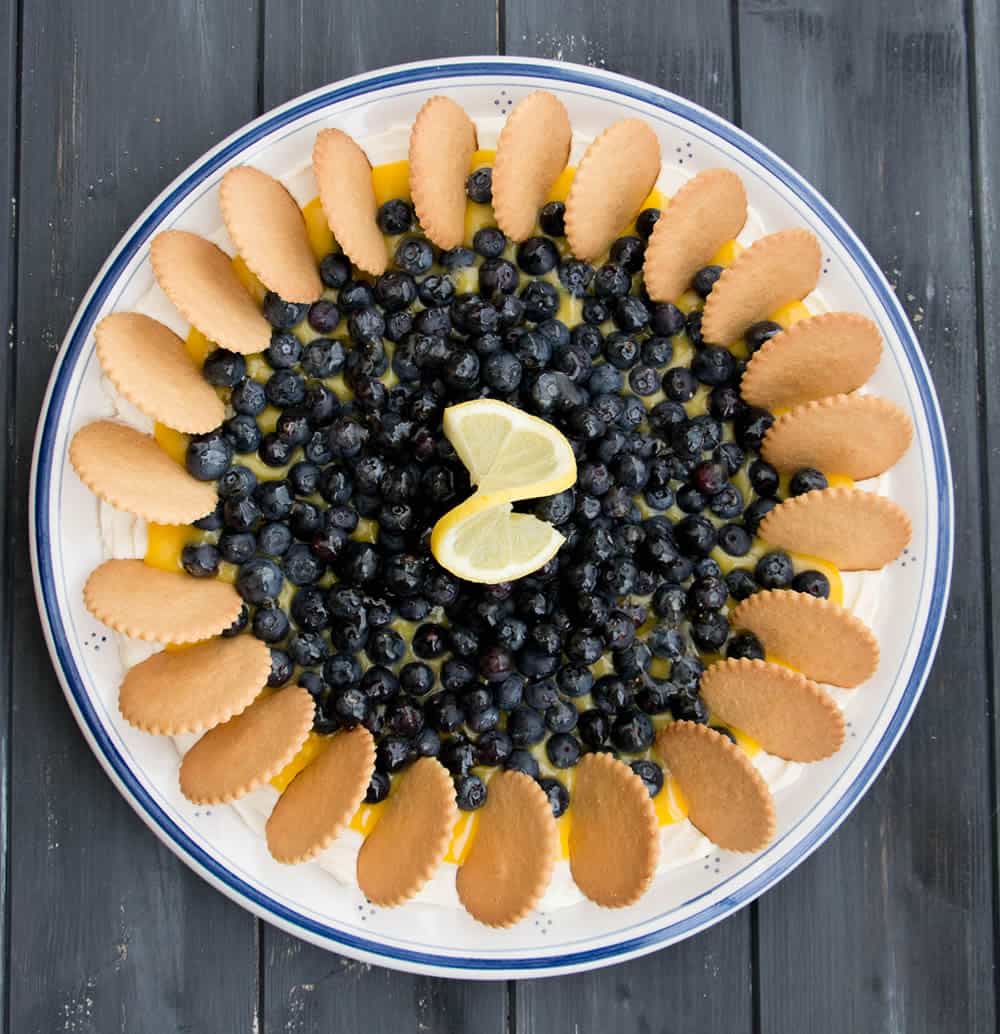 That dip was such a huge hit. Really. I know a few people who have made it their standard dessert to take to dinner parties. And I know why…it’s easy, it’s impressive, and it’s delicious! Triple threat!

The thing is, while it is every bit a dip, it hardly looks like a dip. I love it because once you’ve assembled all the tasty bits, it looks like a fancy dessert. 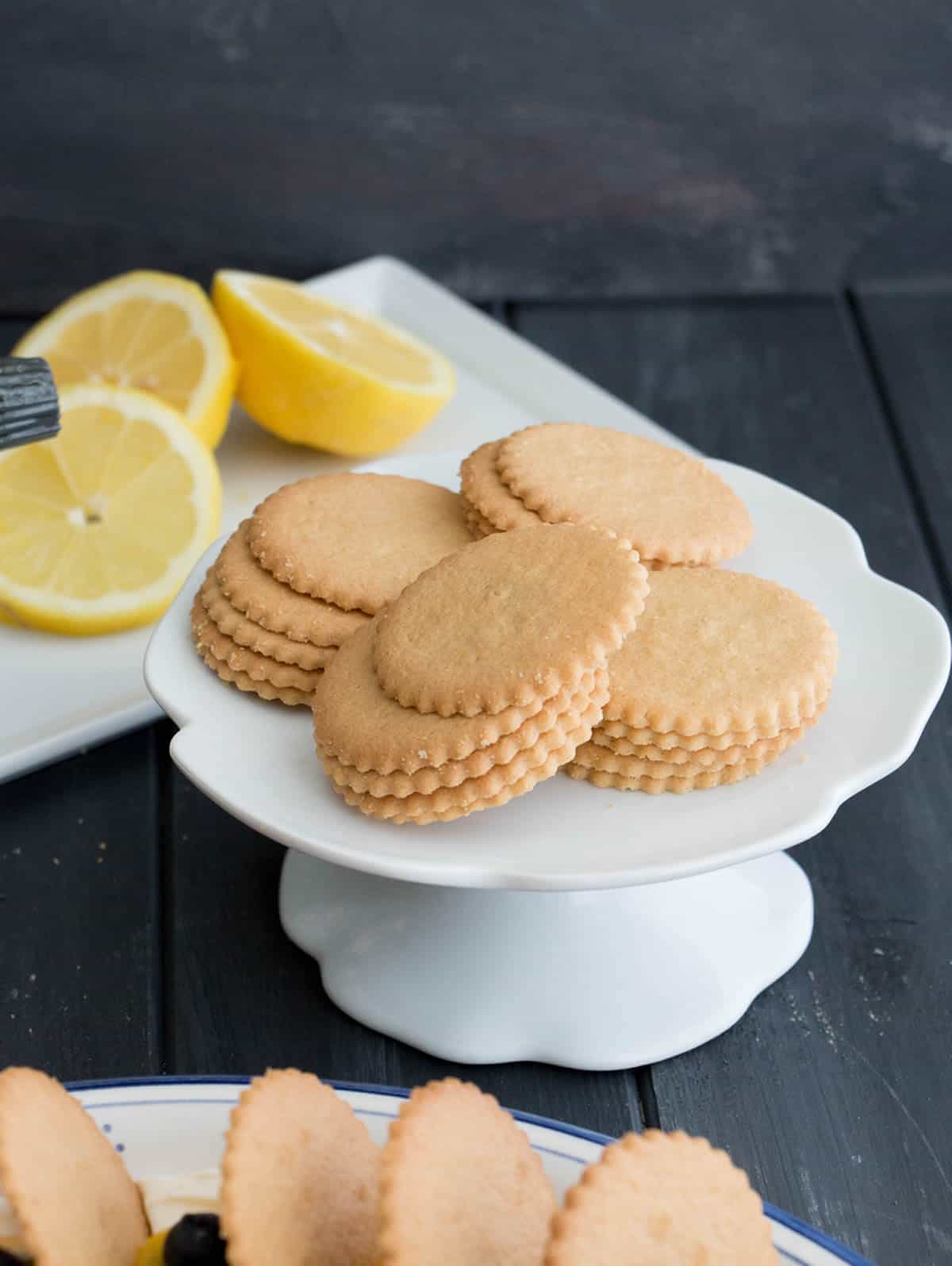 There’s absolutely no baking involved, just a little stove top cooking to make some homemade lemon curd. You know I LOVE lemon curd. Oh my gosh, I think I could eat it with a spoon! Whenever we have left over lemon curd, it never ever goes to waste. We’ll put it on EVERYTHING!

And lemon curd is surprisingly easy to make. I’ve got my “go to” recipe on the site. I suggest you make that one. One pan, a few ingredients, shockingly delicious.

Or, if you have a favorite recipe, make that. Of course, if you want to take a short cut, I’ve got no issues if you want to buy some prepared lemon curd. 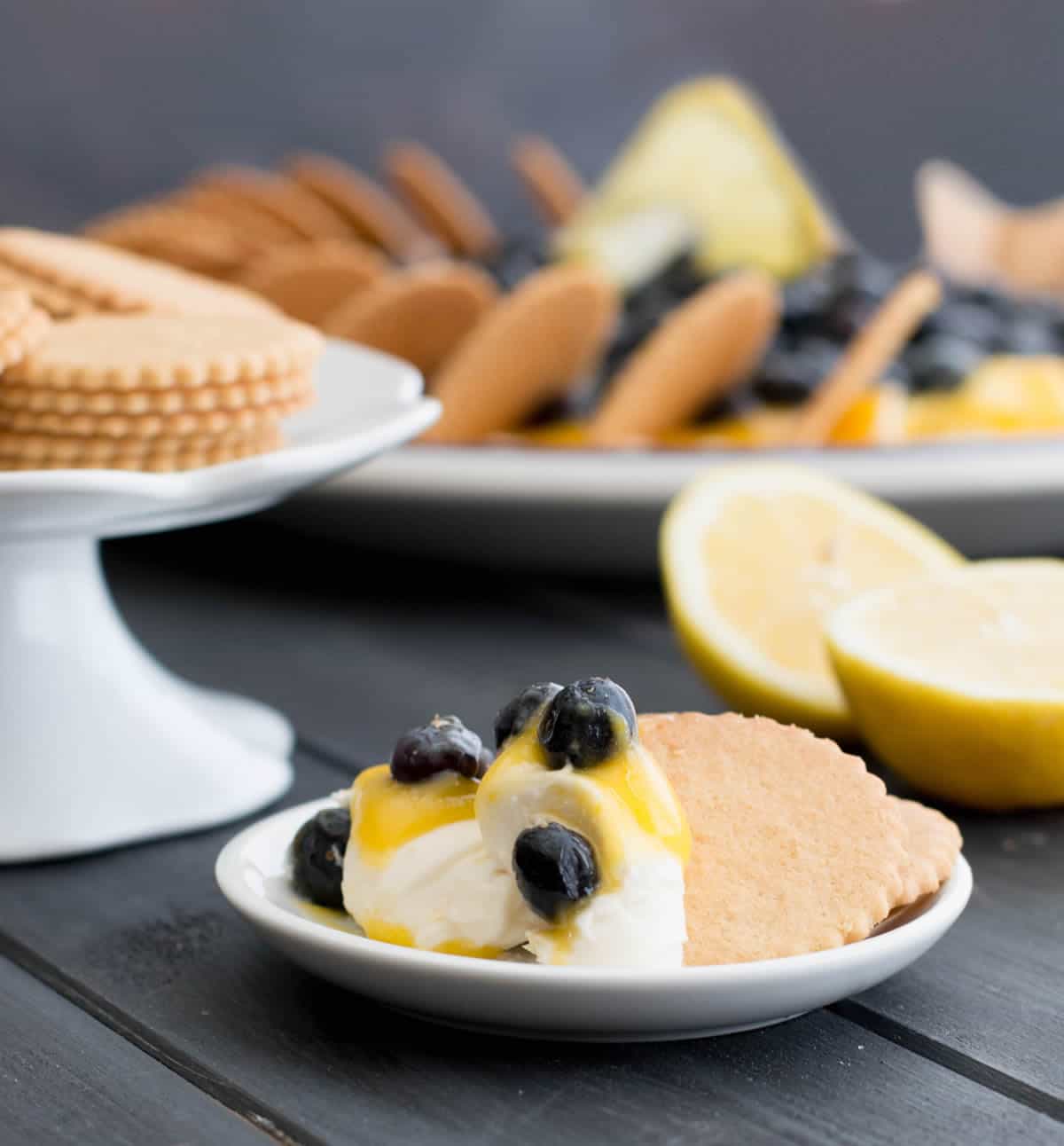 But I’m getting ahead of myself. Let’s start with the first layer. It’s basically a no bake cheesecake layer. You’re going to whip up some cream cheese, sugar, vanilla, salt and lemon zest. Then, you’ll drizzle in some heavy cream and continue beating until the mixture is thick and fluffy.

Speaking of eating lemon curd with a spoon, you’re going to want to taste some of this yummy cream cheese mixture. Feel free to sample it now. Just leave enough for the recipe ?

The next important thing is your serving plate. I think this dip works best on a large flat surface. I like a good 12” plate. That will give you enough room to spread it thinly. 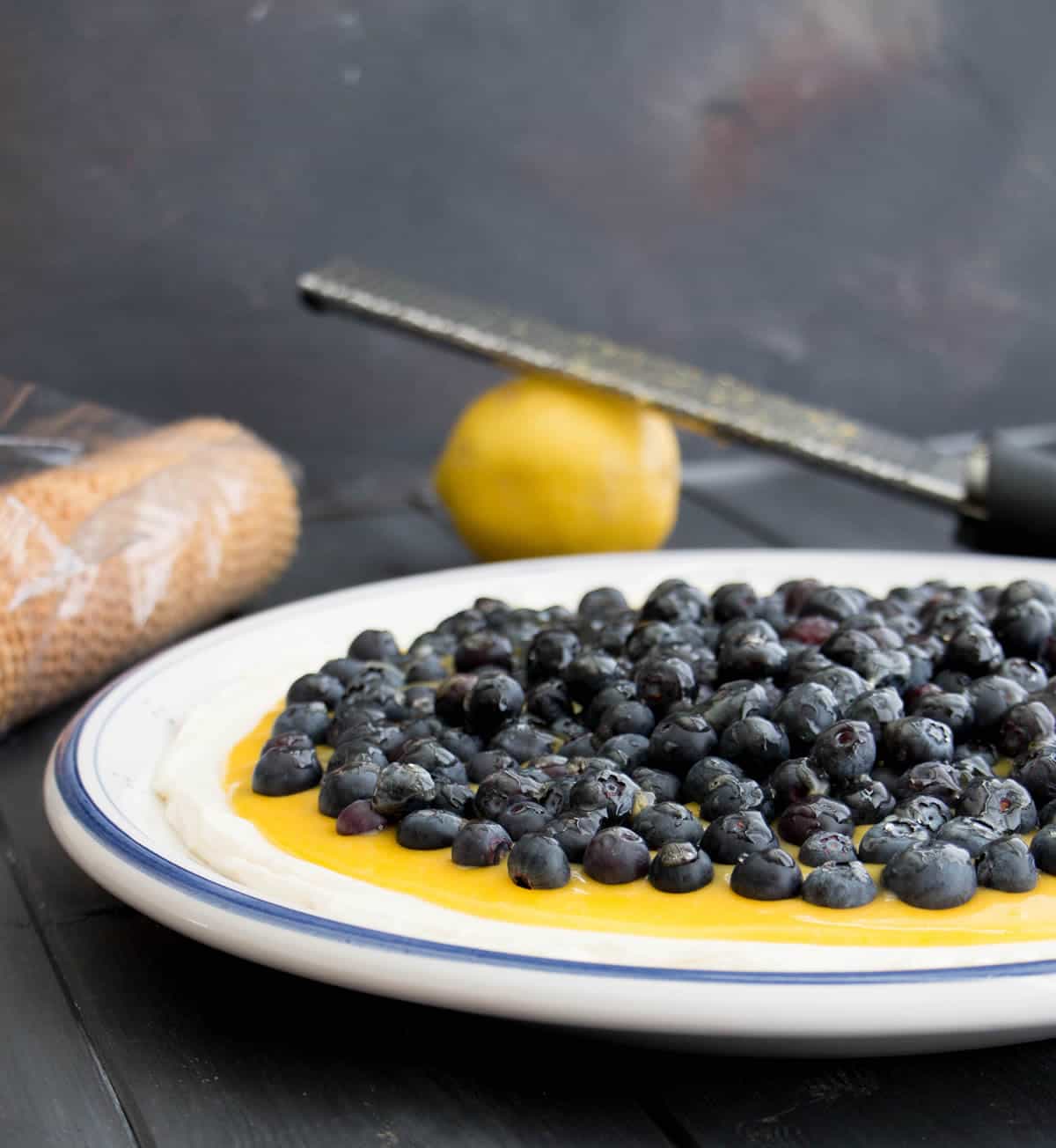 There’s a reason I like to make thin layers with this dip. It’s much easier to scoop up. And, you don’t end up with a bowl that looks like it’s been through a war zone after only a few people have gotten in to scoop it up.

I hate layered dips that get destroyed too soon. Then they’re just messy plates of food that no one wants anymore.

So use a nice big, flat plate. It can be any shape. You just want enough surface area to spread a thin layer. 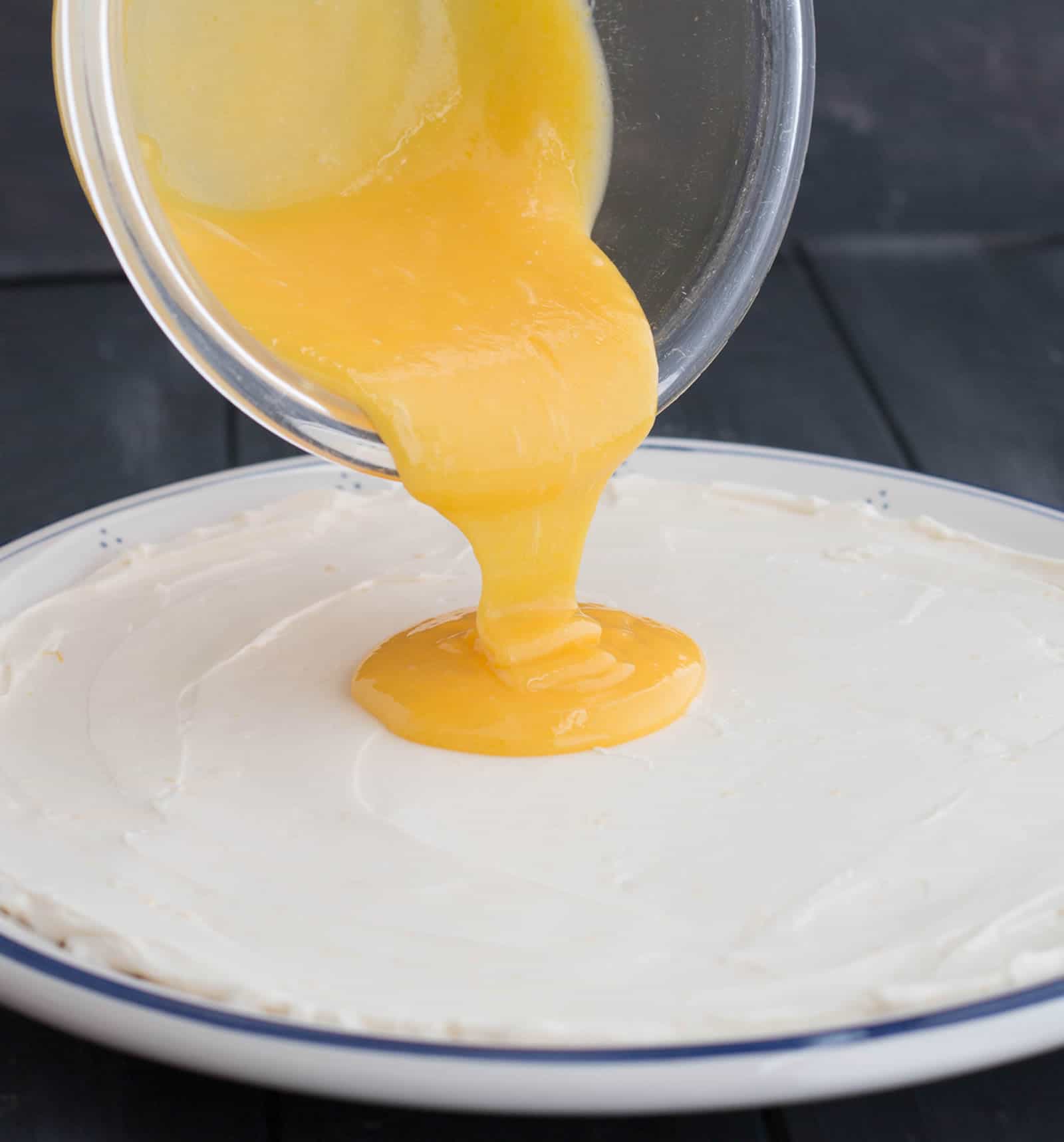 I debated which fruit should top this lovely lemon dip but settled on blueberries. Then I had a supply problem.

For the past few years, right around this time, my grocery stores have been chock full of gorgeous, plump, sweet and juicy organic blueberries at amazing prices. I usually buy a few pounds a week and we eat them by the handful or on cereal, yogurt and of course, baked goods. I’ll also freeze a bunch to use for smoothies. Love ‘em! 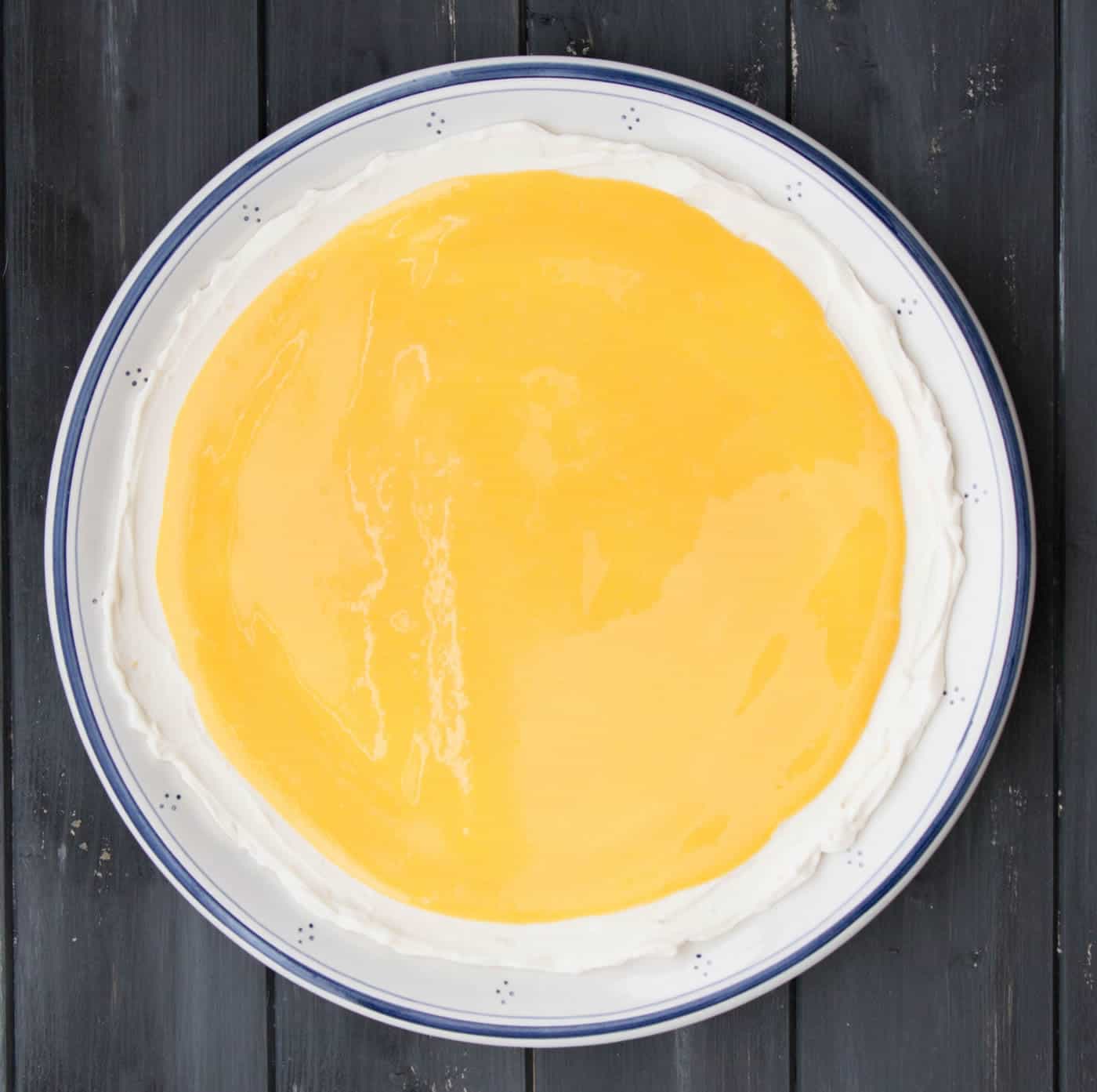 This year? Zip. Nada. Nothing. Alright. I’m exaggerating. There were berries, but not that crazy bounty of beautiful blueberries I had gotten used to. The few organic ones I found were triple the normal price and they were sad looking berries. Many didn’t even look ripe.

So I really should have considered another berry. I almost went for the blackberries. That would have been really pretty, but a little hard to scoop up on a little cookie.

So I waited a week or two and found some that I thought would work for my recipe. They aren’t the plump, almost the size of small grapes, blueberries I so eagerly scooped up last year, but they were ripe and sweet. (Hopefully we’ll get another shot at that bounty this summer.) 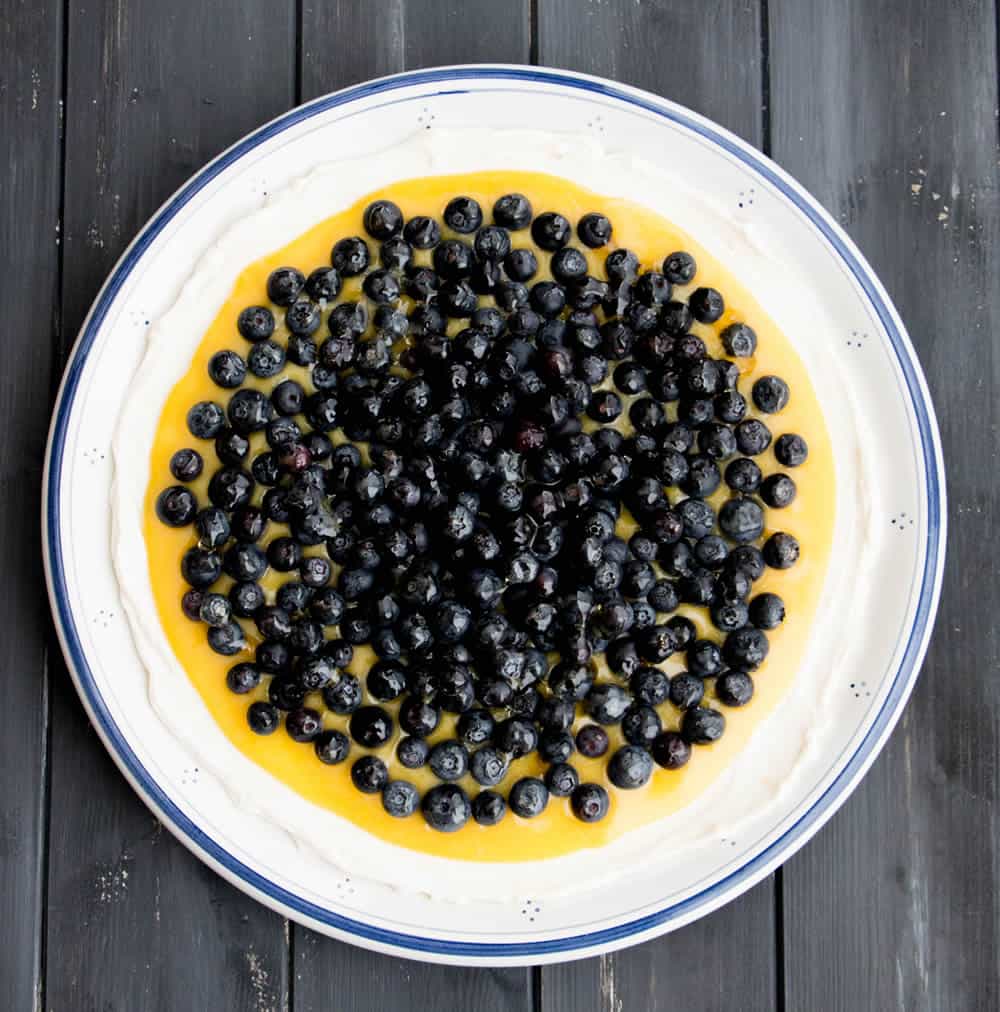 I did think they could use a little help though, in the beauty department. You know, a little shiny glaze to dress them up a bit? Blueberries have a dull finish whether you get amazing ones or not. Since these were the top layer of my special dip, they needed a bit of shine, a little bit of gloss.

Don’t worry. This is super easy to do. The secret is jelly. Any jelly will do. You just don’t want jam or preserves or anything that isn’t clear. I used apple jelly, but I could have used another kind. Apple is just easy because it’s colorless.

Simply take a couple spoonfuls of the jelly and melt it in the microwave. Then you have two choices. You can brush the melted jelly over the top of the berries after they’re on the dip. 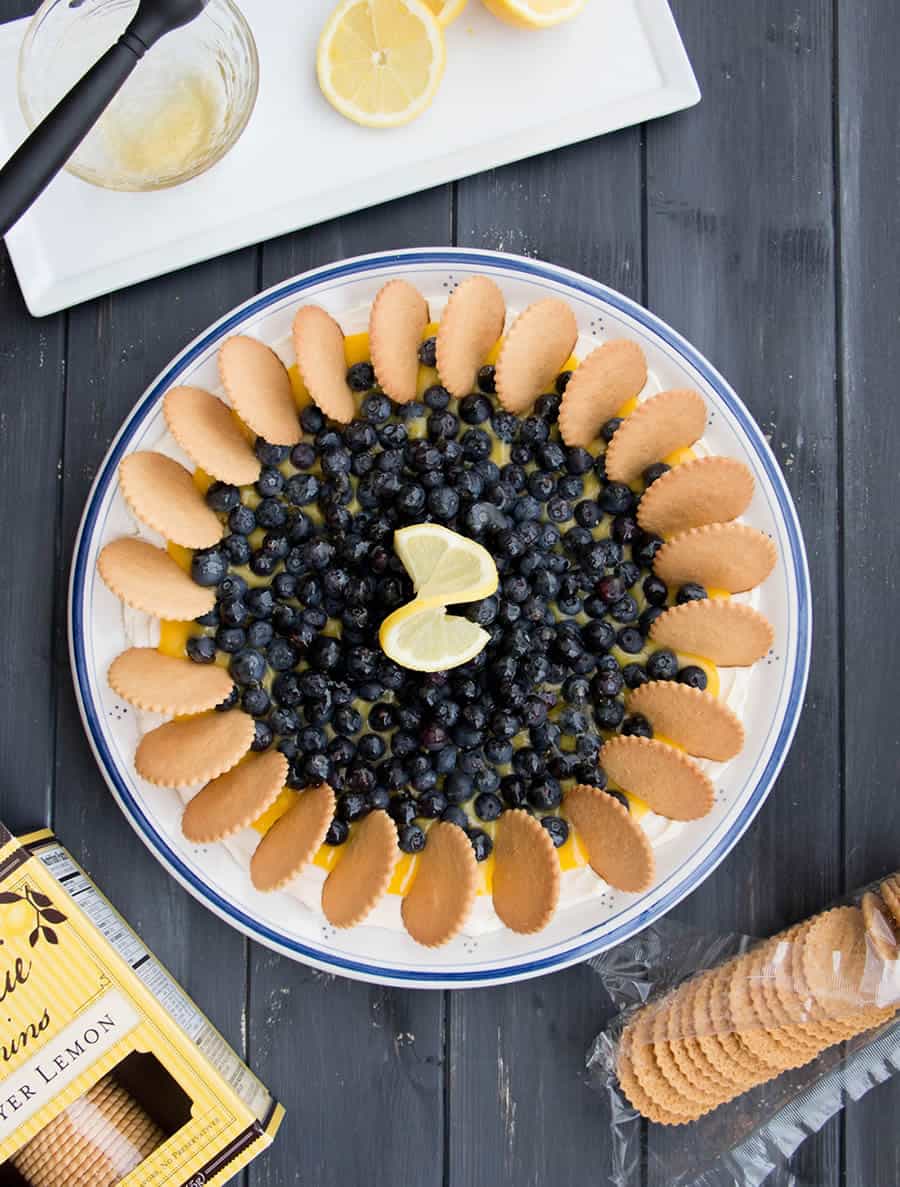 Or, you could just toss the berries in a bowl to fully coat them and then layer them on the dip. I brushed the jelly on top this time. Next time, I’m just gonna toss the whole thing together and then top the dip. It will be faster and easier.

I was worried they would weep if I coated them completely. They’re blueberries though, so I don’t think that would have happened. But, next time, I’ll just put the berries on close to serving time.

That’s pretty much it. Your Lemon Blueberry Cheesecake Dip is done save for the cookie “crust” you’ll place all around the edge. I love this part. It really finishes the dip and makes it look fancy. I decided to use thin lemon cookies, but vanilla wafers, graham crackers or other simple cookies would be just as delicious. 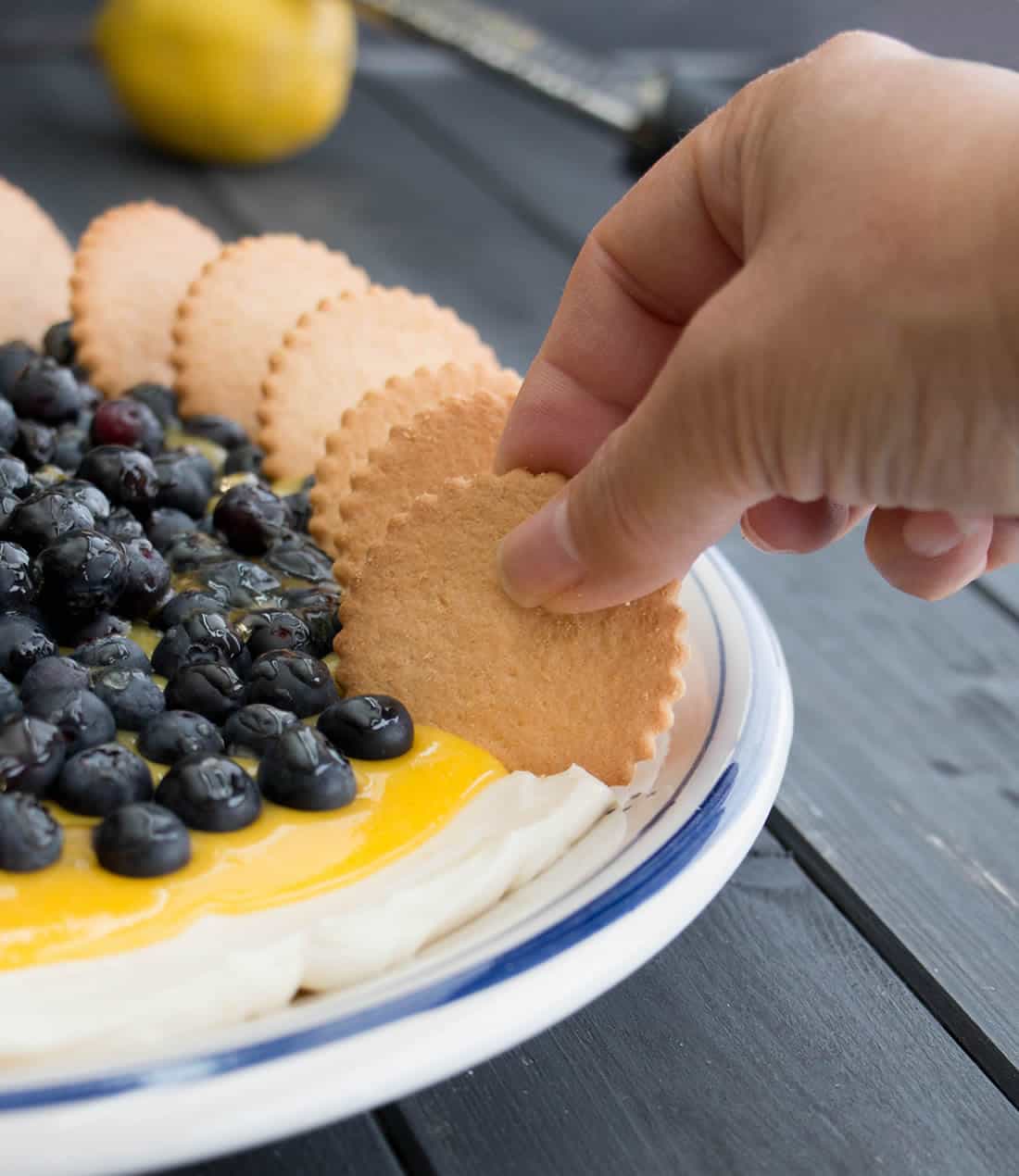 Speaking of just as delicious, we had leftovers. And, instead of using it as a dip, we used it as a topping for pancakes. So good! So, so good. There wasn’t a spoonful left after that breakfast. It was a hit! #breakfastsplurge

And really, you could skip the cookies and serve it with slices of pound cake on the side, if you really want to go all out.

This Lemon Blueberry Cheesecake Dip is simply delicious. It’s fun to scoop it up with a little cookie, but go ahead and make sure you have a serving spoon nearby. 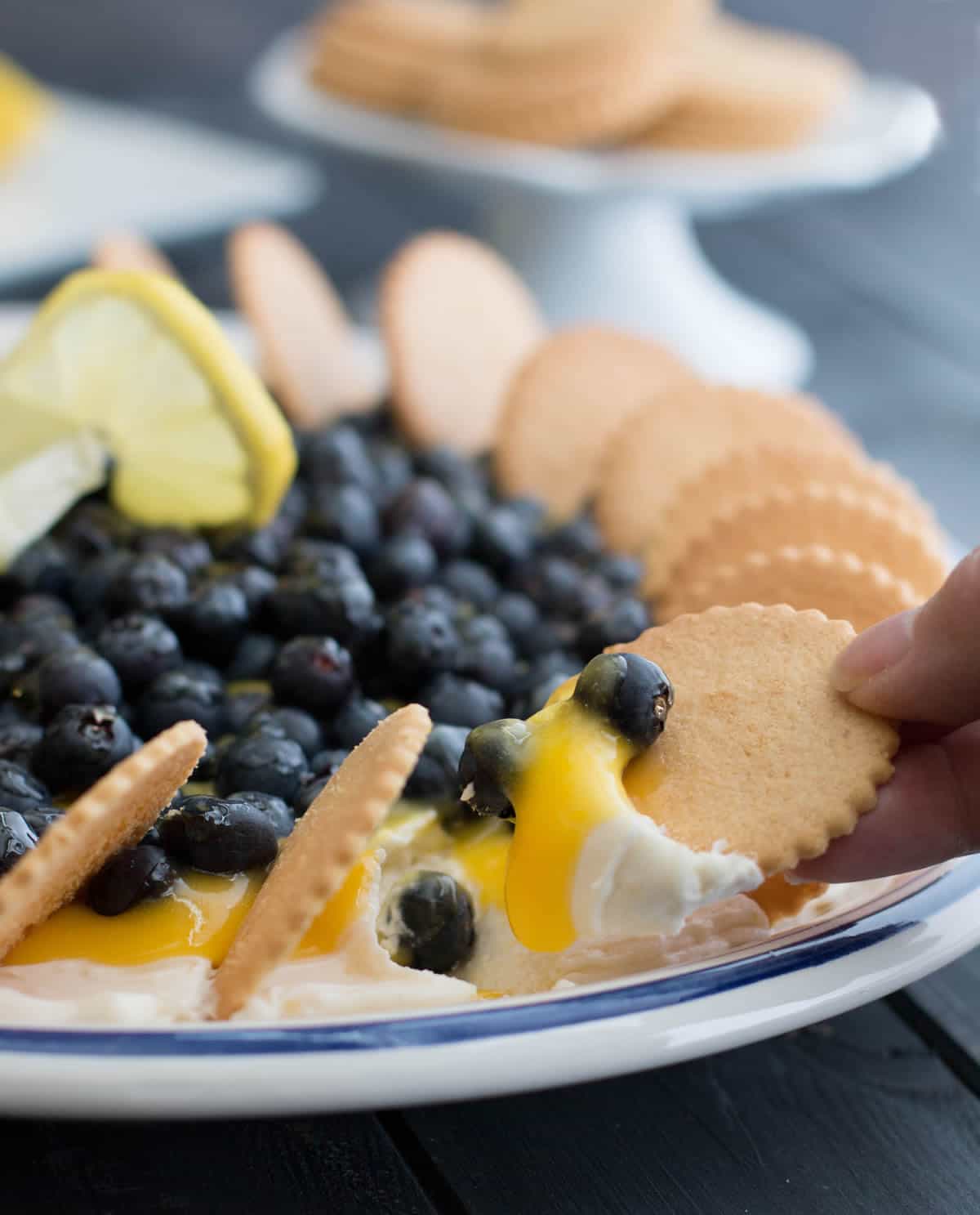 You’re probably going to need it :)

For the fruit topping:

*If you make your own lemon curd, you'll need about 2 large lemons. That should give you enough juice and zest for the curd recipe as well as enough zest for the cheesecake layer.

*You can use any clear jelly that will melt down into a syrup. Jams and preserves will not give you that shiny effect. I used apple, but you could use grape or blueberry or any flavor that works for you.

*If you want to make this a day ahead, I would make the cream cheese layer, spread it on your serving dish and cover with plastic wrap. The lemon curd will cover any marks you get if the plastic wrap touches the top. Make the lemon curd and keep it separate. Then, you can spread with the lemon curd and top with berries before serving. You could probably assemble the whole thing and refrigerate it (without any cookies in it) My only worry would be if the berries released any juice while sitting for an extended time in the refrigerator. Blueberries are unlikely to do that, but it's just as easy to place them on just before serving. Definitely wait to place cookies around the edge until just before serving.

*If you have any leftovers, they're great spread on pancakes, waffles, muffins or pound cake. I think it would also be delicious to stir into oatmeal for a special breakfast treat.

I too love lemon anything-especially lemon curd! Thinking this will be a "dangerous" dessert to have around-but really can't wait to make it. Such a neat idea!

Mary, if you love lemon curd...and cheesecake, then I'm pretty sure you'll love this too... "danger" and all! ;)