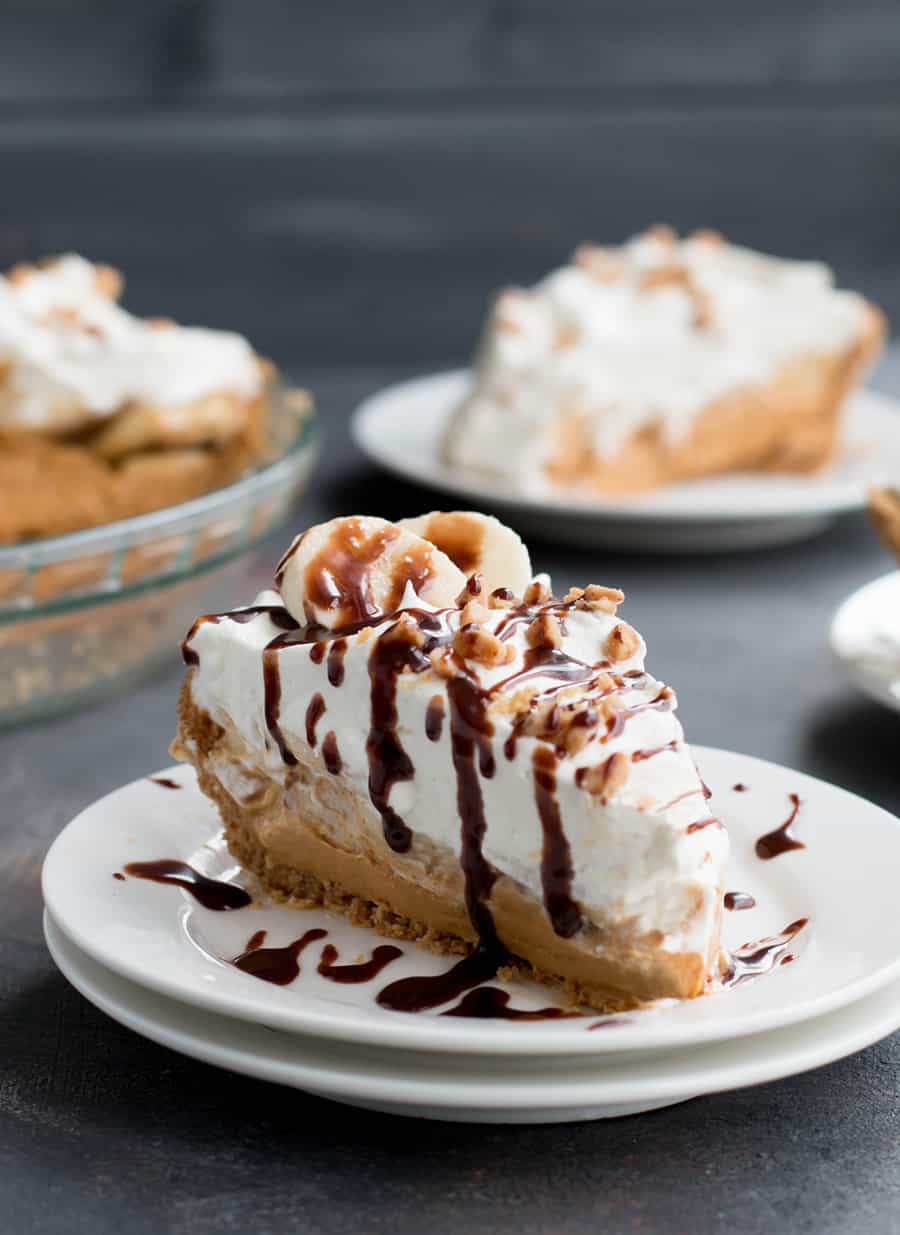 Banoffee Pie. Yep. I’ve known about it for forever. I’ve seen recipes. I’ve seen it made on cooking shows. It always looked good to me.

I can’t even tell you what compelled me to make it for this post. I’ve sort of been craving banana cream pudding, something I haven’t had or made in a million years. I also saw a video last week for banana cream pie cupcakes. Maybe that was the catalyst. 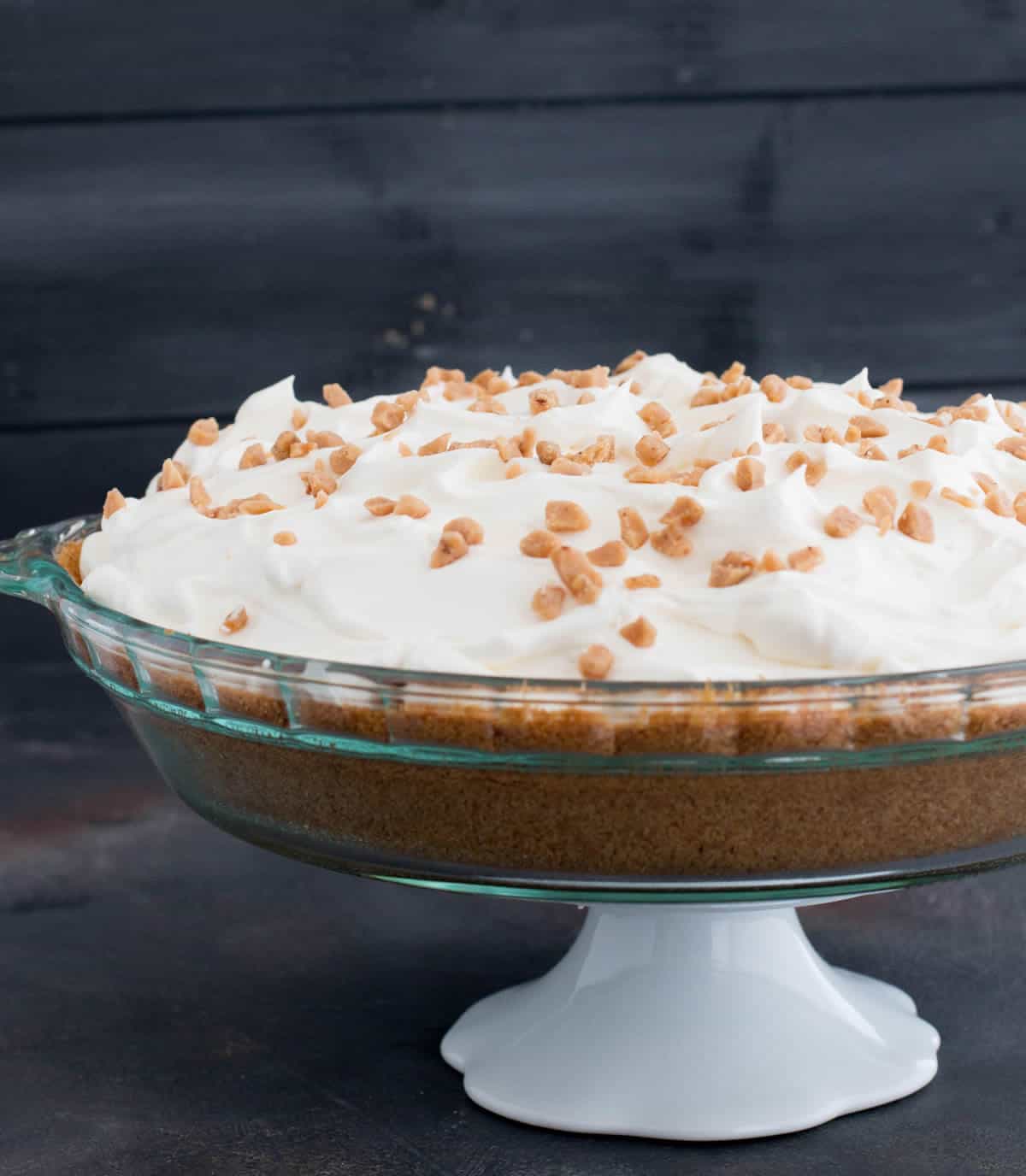 What is banoffee pie exactly? Apparently, it was invented almost 50 years ago, in Britain at the Hungry Monk Restaurant in East Sussex, by the restaurant’s owner, Mackenzie and his chef, Ian Dowding.

Oh, and the official name is Banoffi Pie, with an “i”. (It’s a combination of banana, coffee and toffee. I have no idea where the “i” came from.)

The pie consists of a crust that can either be a pastry crust or crumb crust. It is then filled with a caramelized sweetened condensed milk, topped with bananas then covered in a coffee flavored whipped cream.

(Full disclosure, I just learned about the coffee flavored whipped cream part. So, that wasn’t part of this recipe’s inspiration.) 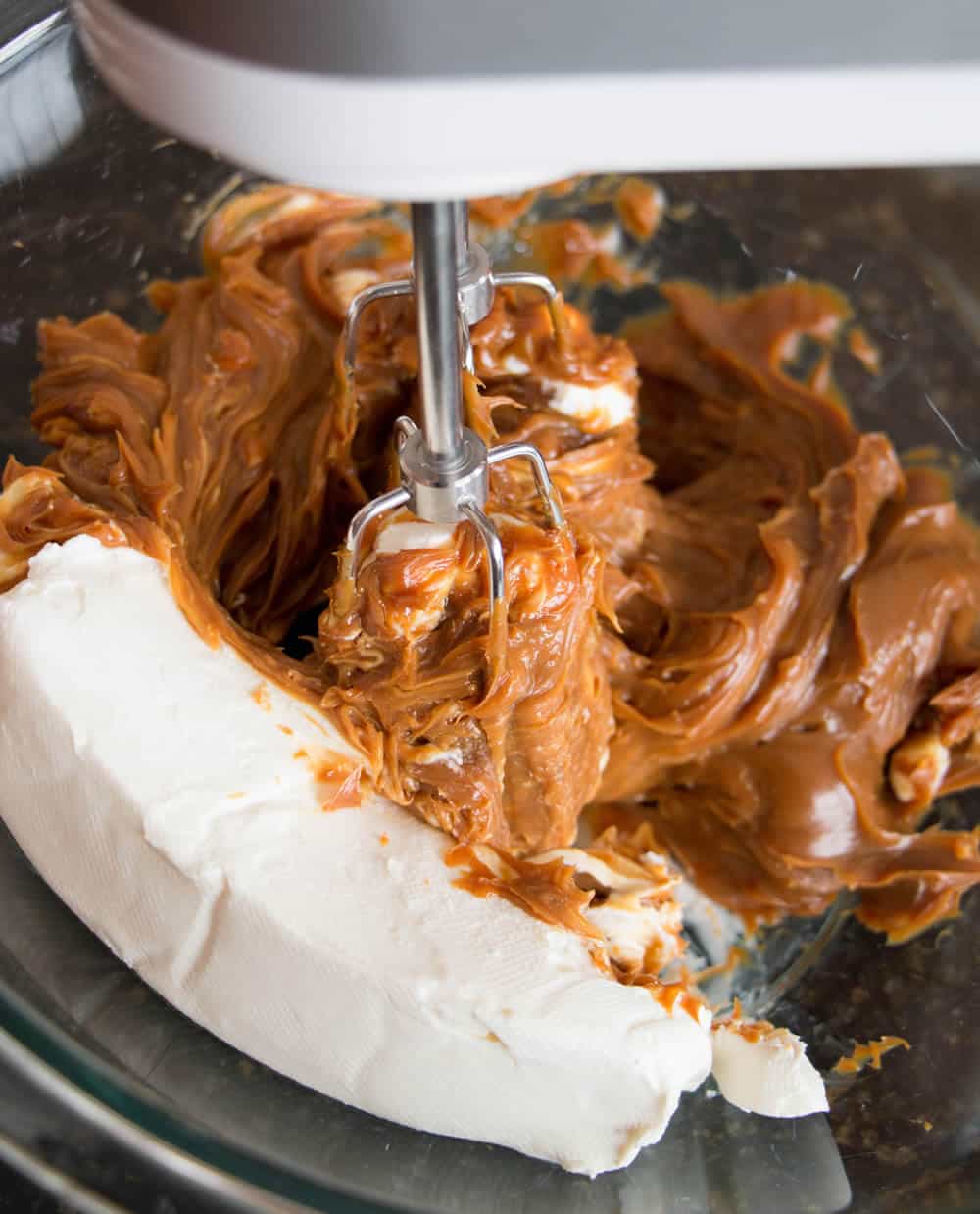 For my Easy Banoffee Cream Pie, I decided on a classic graham cracker crust. I thought about going the vanilla wafer route like I did in Lemon Lime Cream Slab Pie. That would have hit the whole banana pudding theme home, but I was afraid it might be too sweet for the filling. And, I already had graham crackers on hand. (Having tasted it, it would be delicious with either crust.)

First, let’s talk about that can of sweetened condensed milk. It is the toffee part of the pie. I’ve known for years that you can boil a can of it and create your own dulce de leche. I’m sure it’s grand, but I’ve never had a desire to babysit a can of milk as it boils for hours. 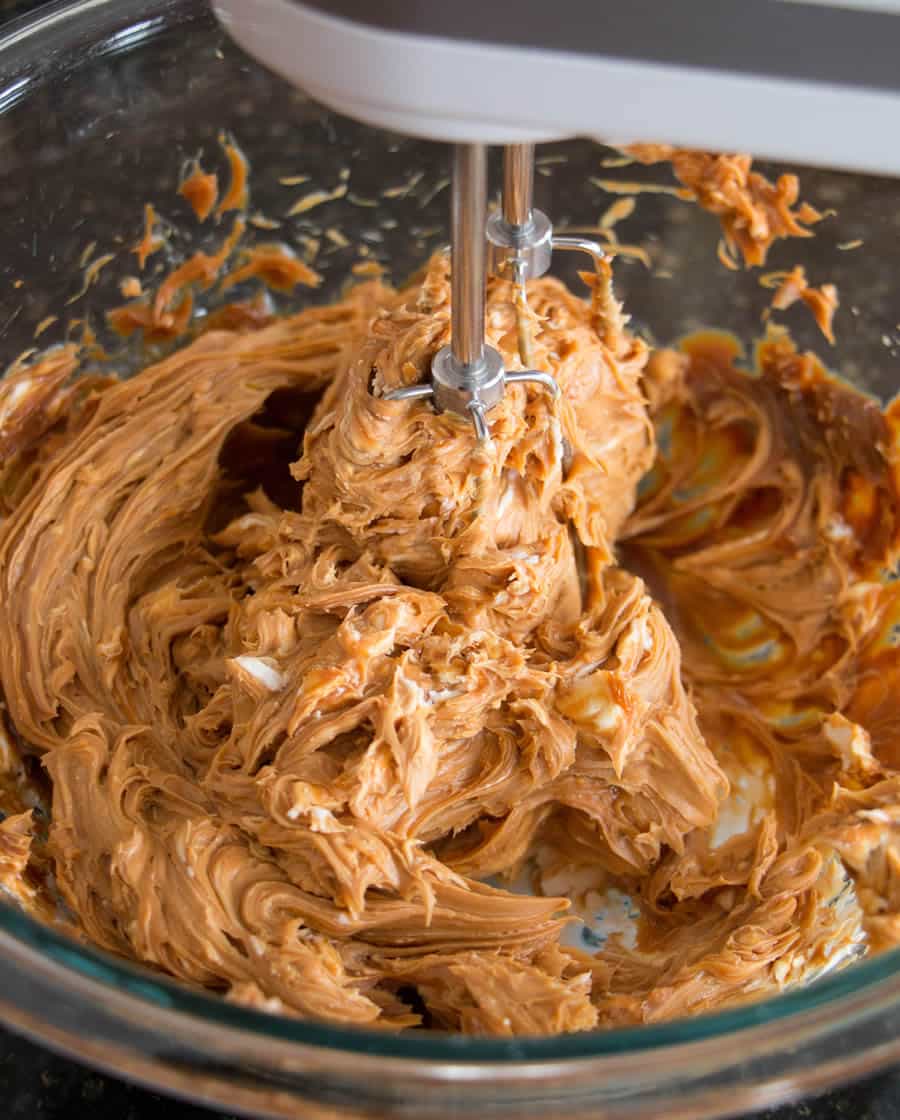 For one, I don’t know how I feel about a can, boiling in a pot, for that long. Two, it can be dangerous. The cans can explode if you don’t keep an eye on the water level, thus the babysitting part.

Don’t get me wrong. I could have done it and maybe someday I’ll try, but today was not that day, not when I can just buy dulce de leche. I happened to have some in my pantry for recipes like Dulce de Leche Brownies and Chocolate Chip Dulce de Leche Bars. 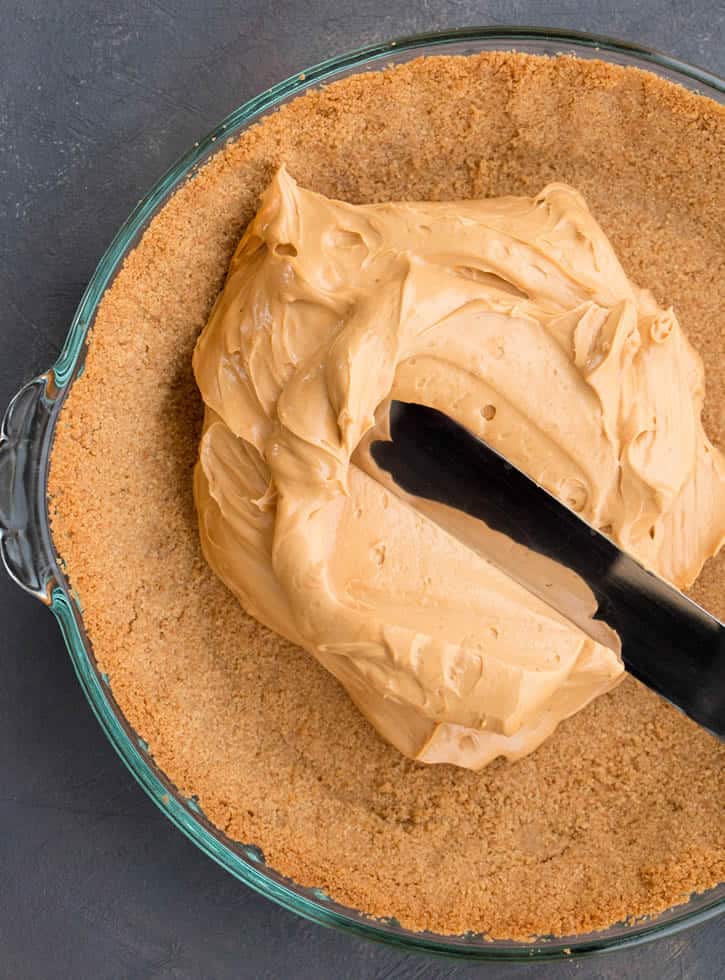 Now…wait for it…here’s the twist. I added cream cheese! When I saw that thick layer of toffee in pictures of classic banoffee pie, I thought I’d like to lighten it up a bit. Okay, so not lighter in calories, but lighter in texture.

After all, I was kind of craving banana cream pie, so why not add some extra cream? In the form of cream cheese? Consider it added protein ;)

It needed some added sugar to balance the tartness of the cream cheese, but let me tell you…it whipped up beautifully! No lumps. It didn’t get too soft. It was just fluffy, creamy toffee filling. Perfect! And, seriously, the easiest pie filling you’ll ever make. 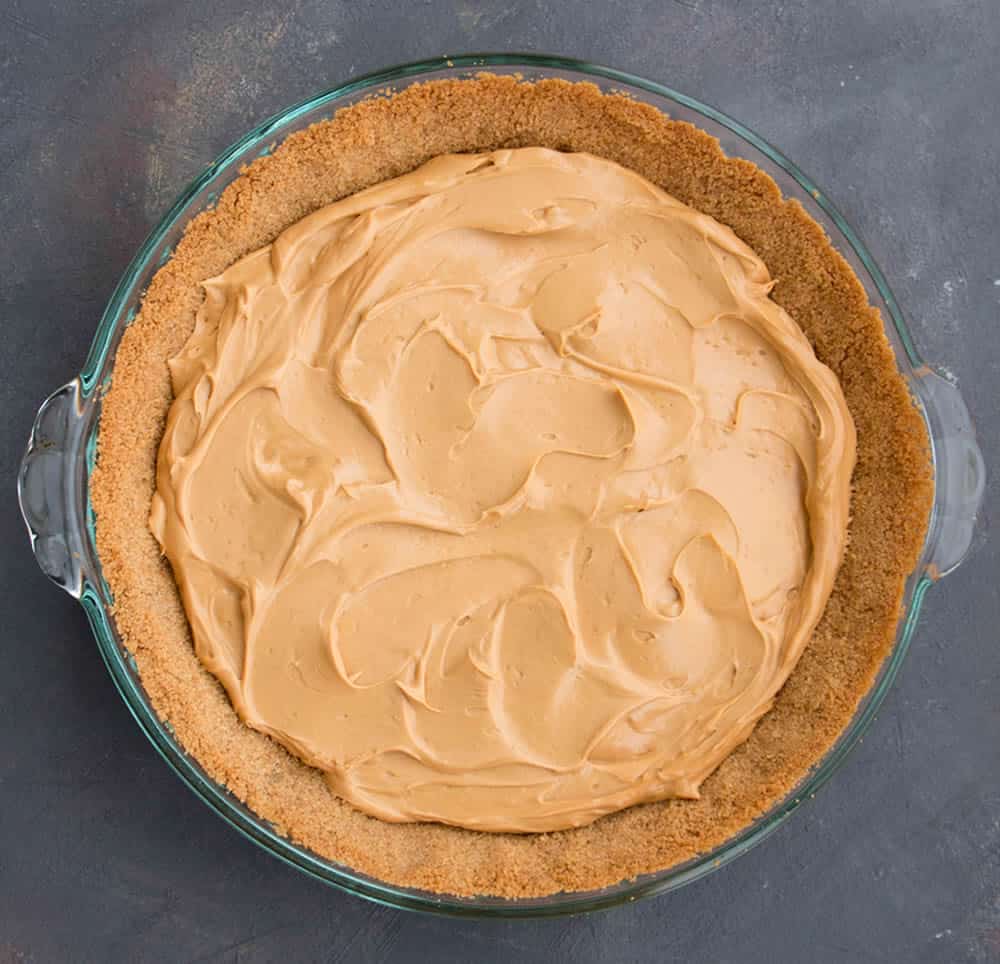 Spread that into your baked pie shell and then just cover it with bananas. I used three large bananas but you can use more, if you’d like.

I arranged them in a pretty circular design that no one will ever see except you. In other words, it’s not necessary unless you’re taking pictures.

That layer of bananas gets topped with a generous layer of whipped cream. I could have whipped it to stiff peaks and piped it, but like my Cookies ‘n Irish Cream Cheesecake Pie recipe, I really just wanted soft swirls of whipped cream. Again. 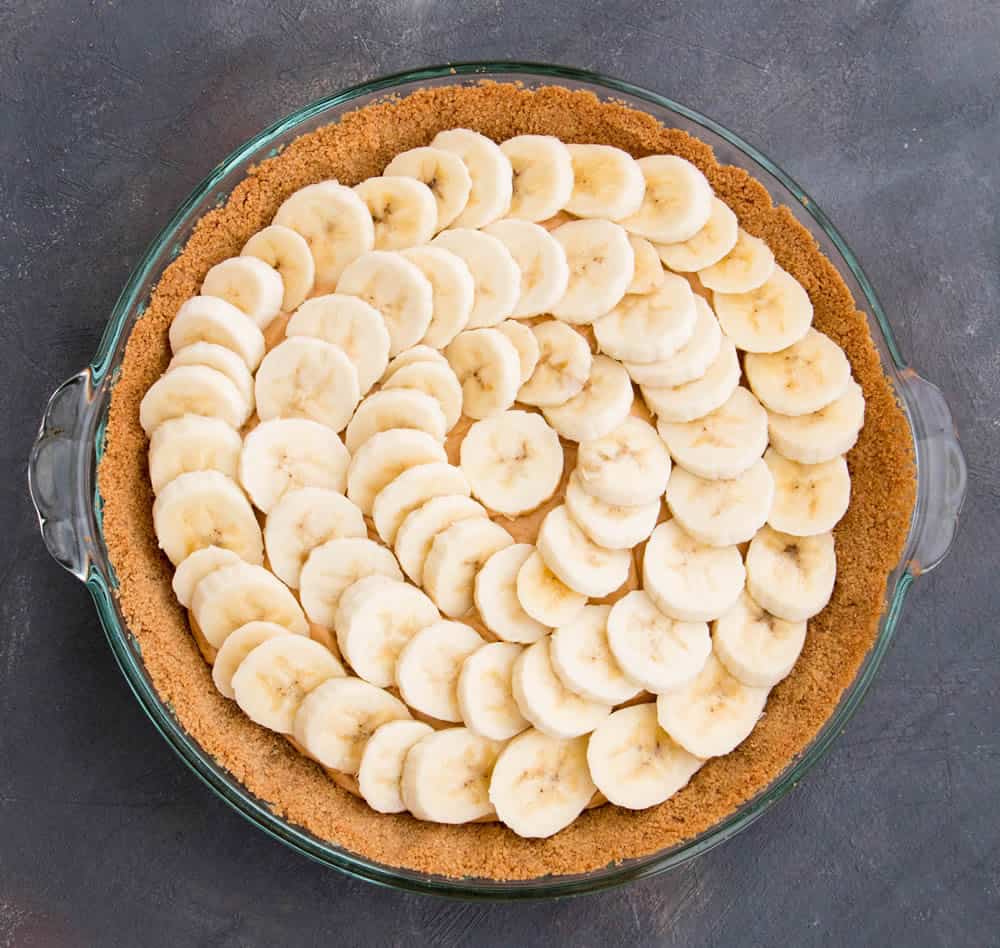 I thought I should have diversified a little, but hey, I was feeling comfy and casual and I did say the pie was going to be easy, right? Right. Swirl it on.

I topped the whipped cream with toffee chips. You know, just a little hint of the flavor that lies beneath, plus it can’t hurt to add a little texture to this otherwise creamy, dreamy pie.

Now let’s talk about patience. You need to refrigerate this baby for a good 4 hours or so. I didn’t do that. I waited an hour, but I was losing light for shooting. I decided to move forward with cutting and shooting it.

My pie wasn’t fully set up. So my slices are messier than they should be. I tried my darndest to get the best shots and to clean up the droopy whipped cream and the slumpy filling, but I should have waited. 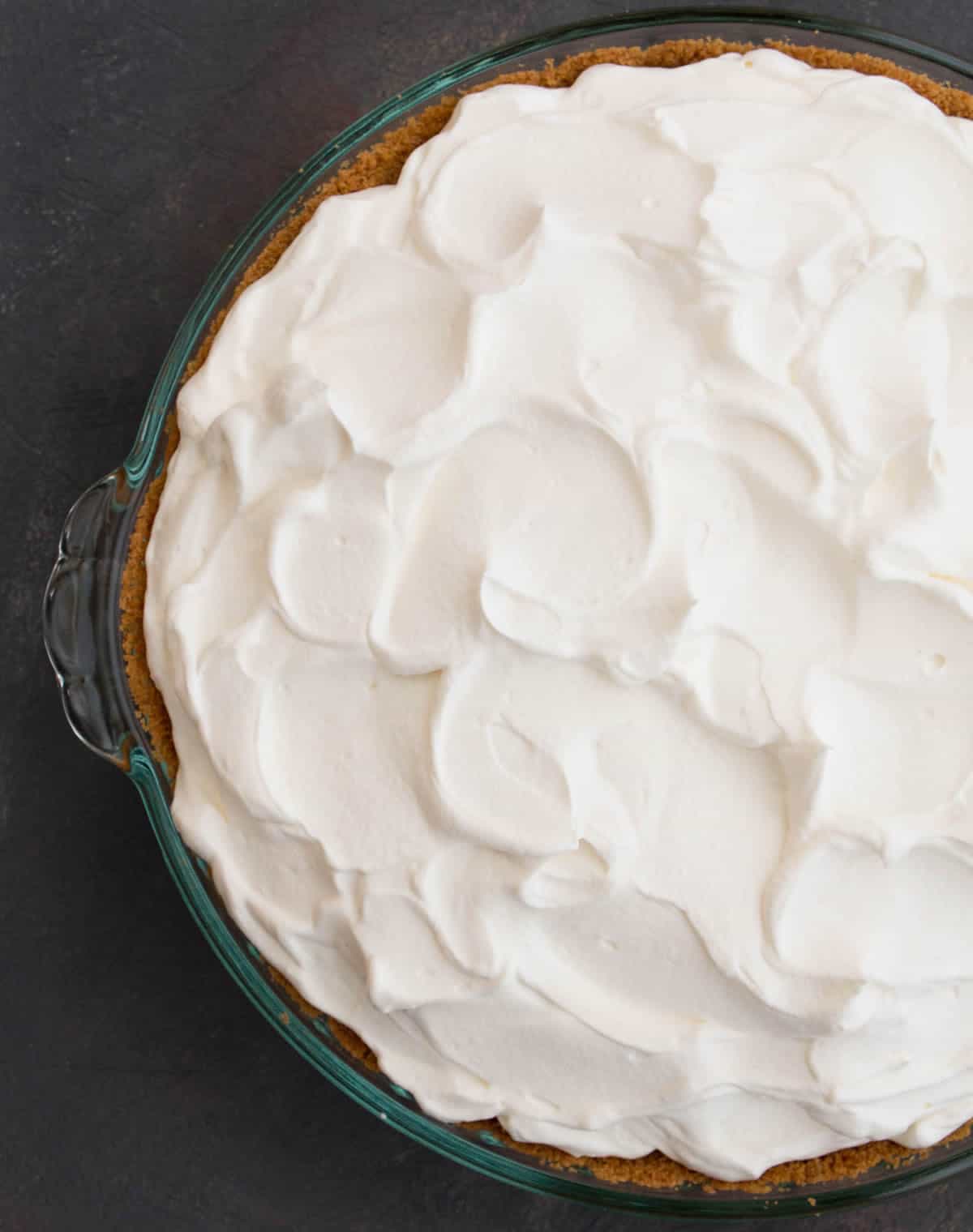 The next day, I had the most beautiful slices! Nice and clean with sharper points. But it was night time and my family was already digging in to their pretty slices.

I considered stopping everyone and saying, “Wait! We’ll have dessert tomorrow, after I shoot these slices again!” #what?!? I chose not to.

It will taste delicious whether you wait or not, but I think you should wait. If you can. It’s an easy pie to make. Might as well make it look as impressive as it tastes.

Let’s chat about chocolate. I really thought about adding a layer of chocolate ganache to the pie. Probably the first layer, before the toffee filling. But, I always think of adding ganache and I thought I should refrain and let the other flavors come forward.

But, geez, I really love chocolate and bananas, so here’s what I did. I “made” Nutella sauce. Yep, I heated a spoonful of Nutella and a splash of milk just briefly. The milk loosened up the Nutella and after some vigorous stirring to combine them, I ended up with Nutella that can be drizzled. 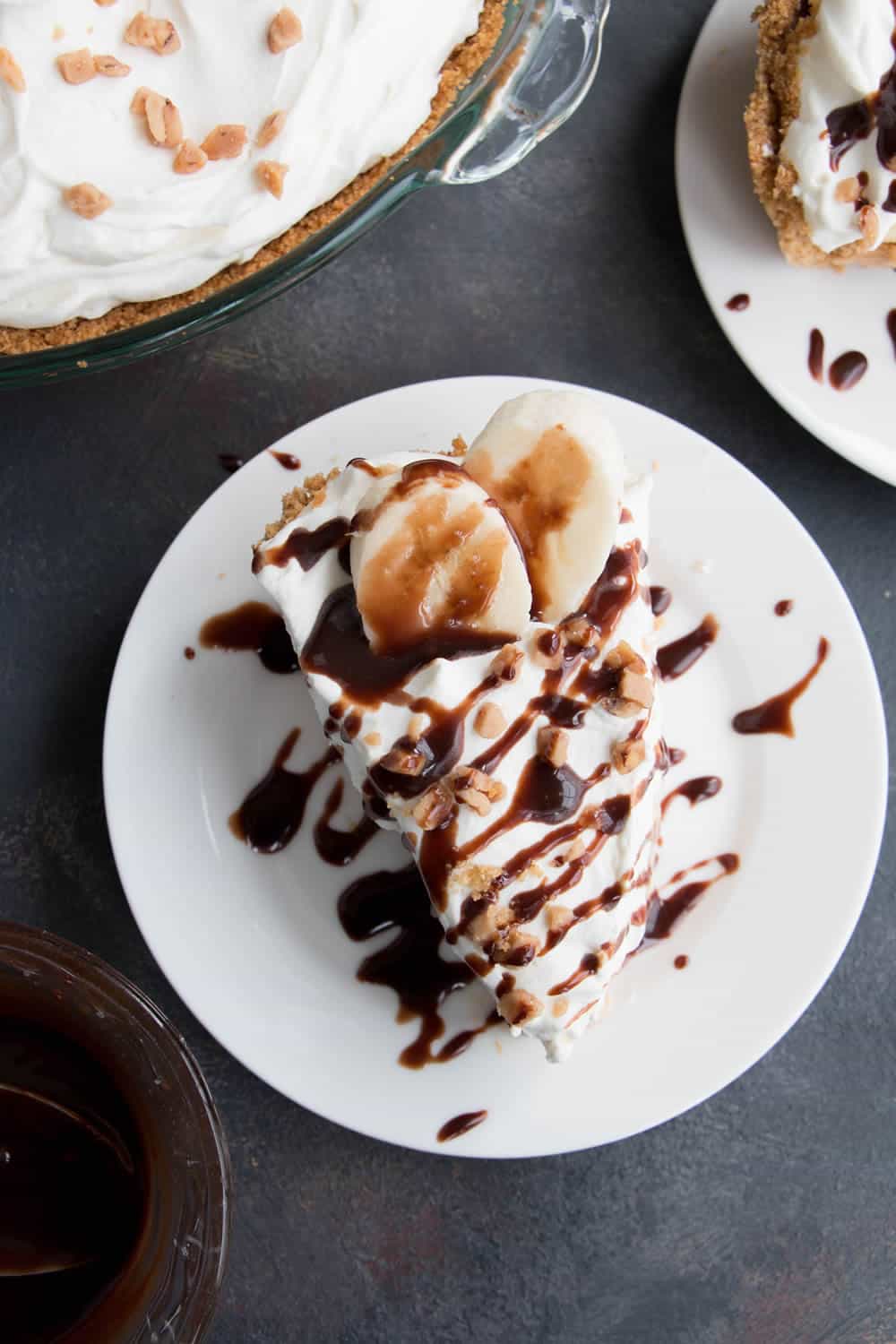 So, I drizzled it over each slice at serving time. Yep, now that’s a slice that’s dressed and ready to impress!

My husband, as he did with the cheesecake, said the pie tasted “light.” I think it’s because it’s not super sugary sweet. It’s light and fluffy and full of banana flavor. The creamy toffee layer melts in your mouth. I think it would taste heavier without the cream cheese, if that makes any sense.

So, I still cannot say that I’ve had classic banoffee/banoffi pie. But from what I’ve tasted of Easy Banoffee Cream Pie, I’m pretty sure I’d love it! I might be biased though… 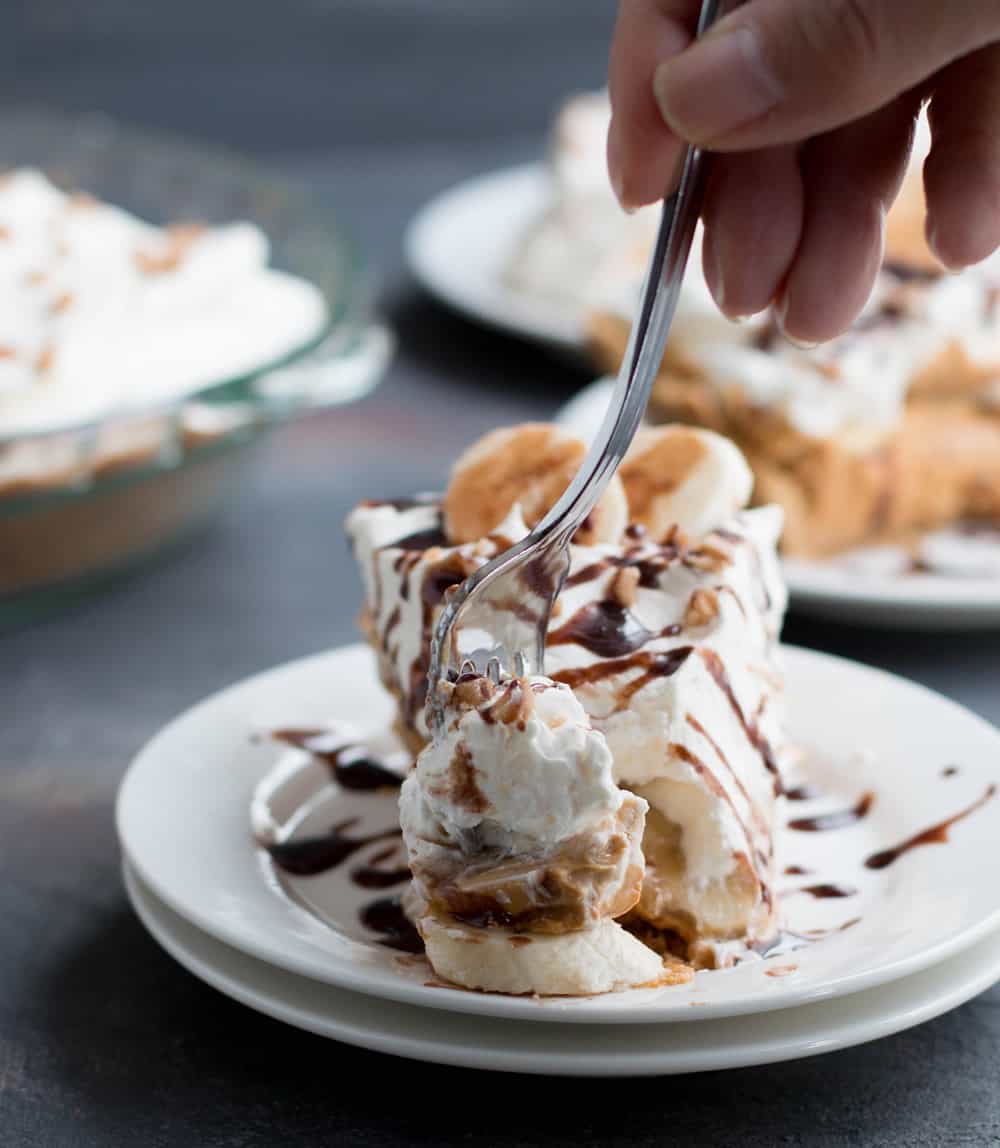 because this bite looks pretty perfect to me :)

For the Nutella sauce:

*If you use a food processor to crush your graham crackers, just add the brown sugar and melted butter to the crumbs and pulse until fully combined.

*You can make this even easier and take another shortcut...just buy a premade graham cracker crust.

*I always use Philadelphia brand cream cheese. It gives me the creamiest texture.

*It's not necessary to arrange your bananas in a pretty design. You can just scatter them evenly over the filling. I used three large bananas. You can add more. I might use four next time.

*For the Nutella sauce, I mixed a Tablespoon of Nutella with 1 teaspoon of milk. That was enough for a nice drizzle on four servings. I made just enough for whatever I served that day and made a fresh batch the next day. Double or triple if you want to make a larger batch. Basically, you're just loosening up the mixture so that it's drizzling consistency. It's a delicious addition and well worth the few seconds to make. If you make a lot and have leftovers, you can store the syrup covered in the refrigerator and then reheat for a couple of seconds to loosen it back up.

*I cut my pie before waiting the full 4 hours. It's delicious but makes for messier slices, which were the ones photographed in the post.The slices I cut the next day came out beautifully. Be patient and wait until the pie is fully set for the cleanest slices.

*This pie stored well in the refrigerator for up to 3 days. There was enough powdered sugar in the whipped topping to keep it stable. I left it uncovered so as not to ruin the top, but be careful if you have any strong food smells (like garlic or onion) in your refrigerator as your pie could pick up these flavors.

Banoffee pie is the freaking BEST. But this one looks particularly amazing. I can barely stand it!