This Whipped Peppermint Frosting recipe is a perfect addition to your list of minty green favorites. 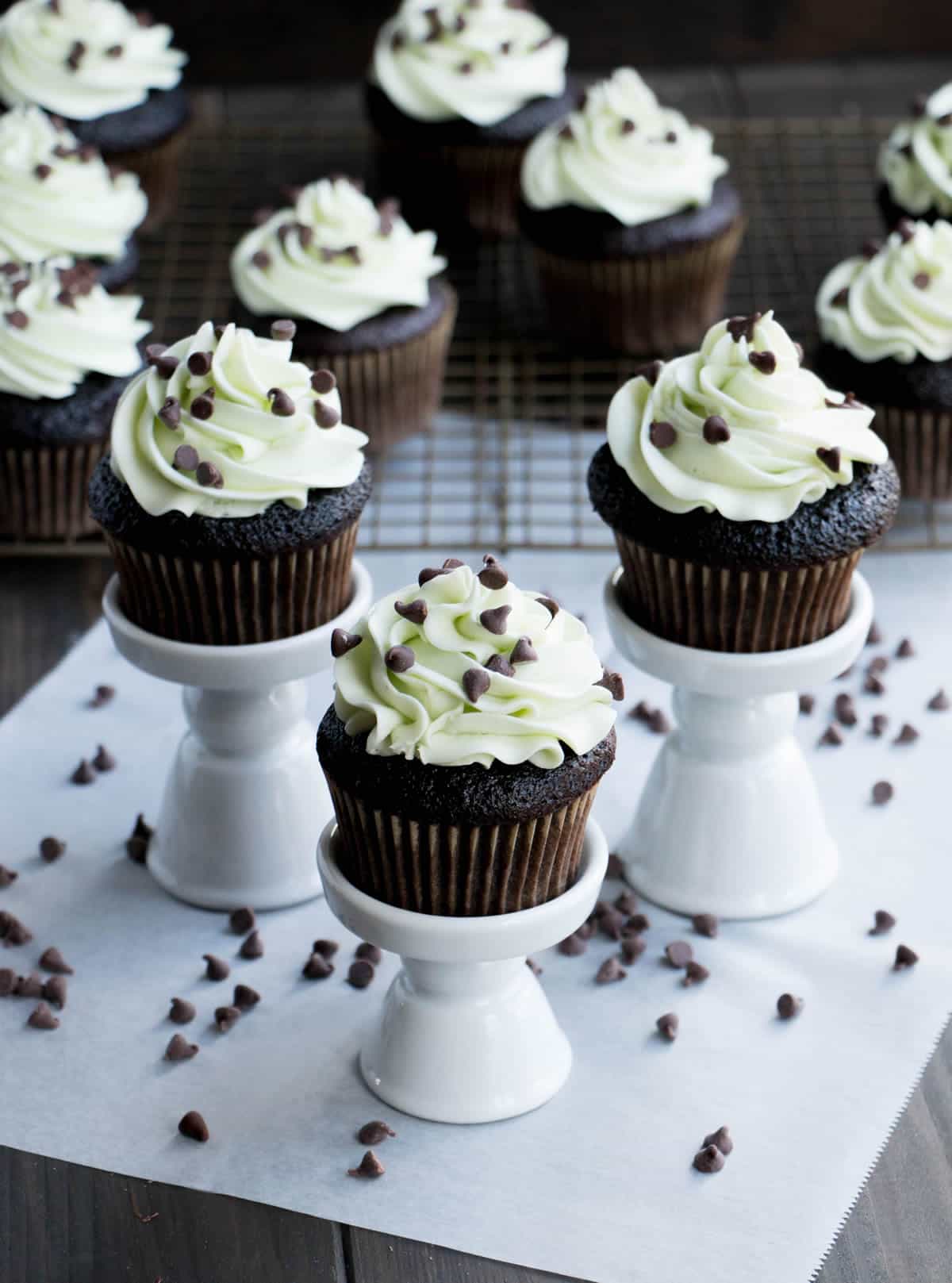 It also falls into the “not too sweet” category of frosting for those who prefer that. I know there’s plenty of you out there because you already love many of the other “not too sweet frostings” that I’ve shared on this blog:

They are the frostings that get the most rave reviews. You know you’ve got a hit on your hands when people single out the frosting on a cake or a cupcake and ask you, “What kind of frosting is this? It’s so good!” 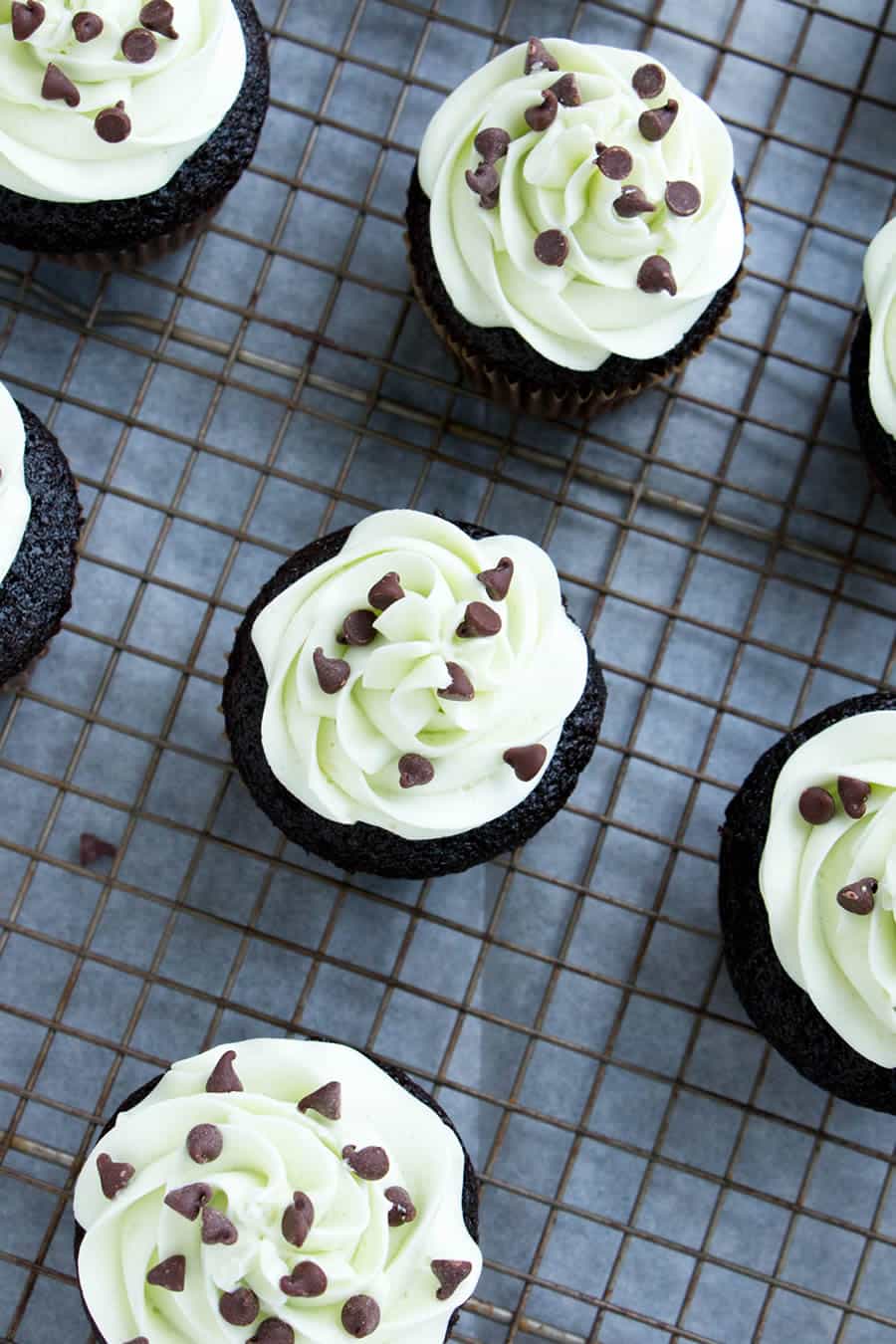 They all have the same thing in common. They are not teeth aching, gritty, sugar coma sweet. That’s the kind of frosting that I can live without, the kind I scrape off and leave on the plate.

This is the mint version of the Whipped Vanilla Frosting that is part of the White Zucchini Cake post. That vanilla frosting truly deserves its own post, but until then, this is the Whipped Peppermint Frosting version. 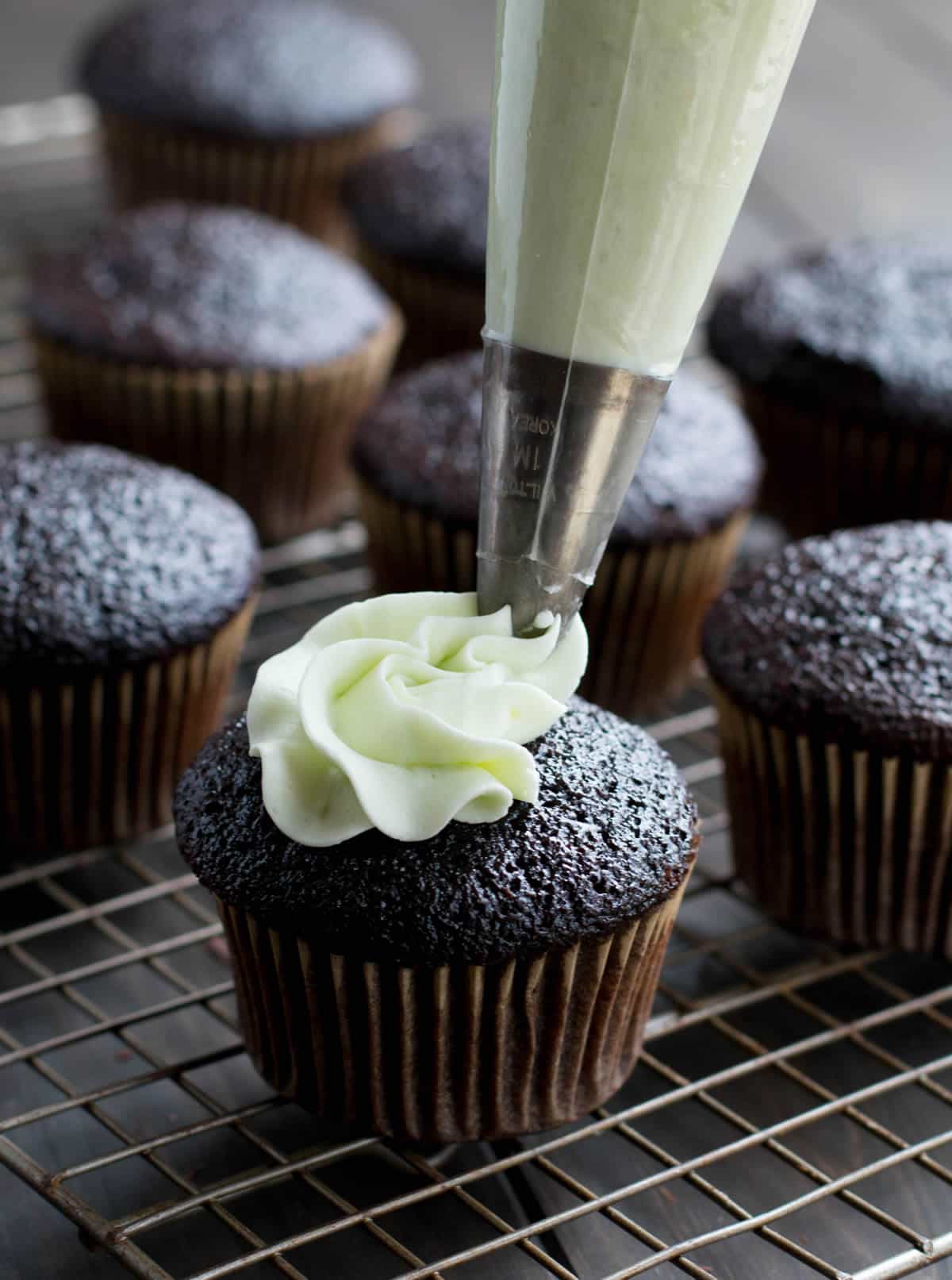 It’s a cooked flour frosting. I know. If you’ve never tried it, it sounds kind of weird.

Basically, you’re going to make a thick white sauce. It’s almost like a bechamel, but there’s no butter in it, just flour and milk. (The butter comes later…)

When you cook those two together, it will smell like you’re cooking a creamy wheat cereal. You start with a slurry adding just a bit of milk at a time and stir constantly so that you don’t end up with lumps. 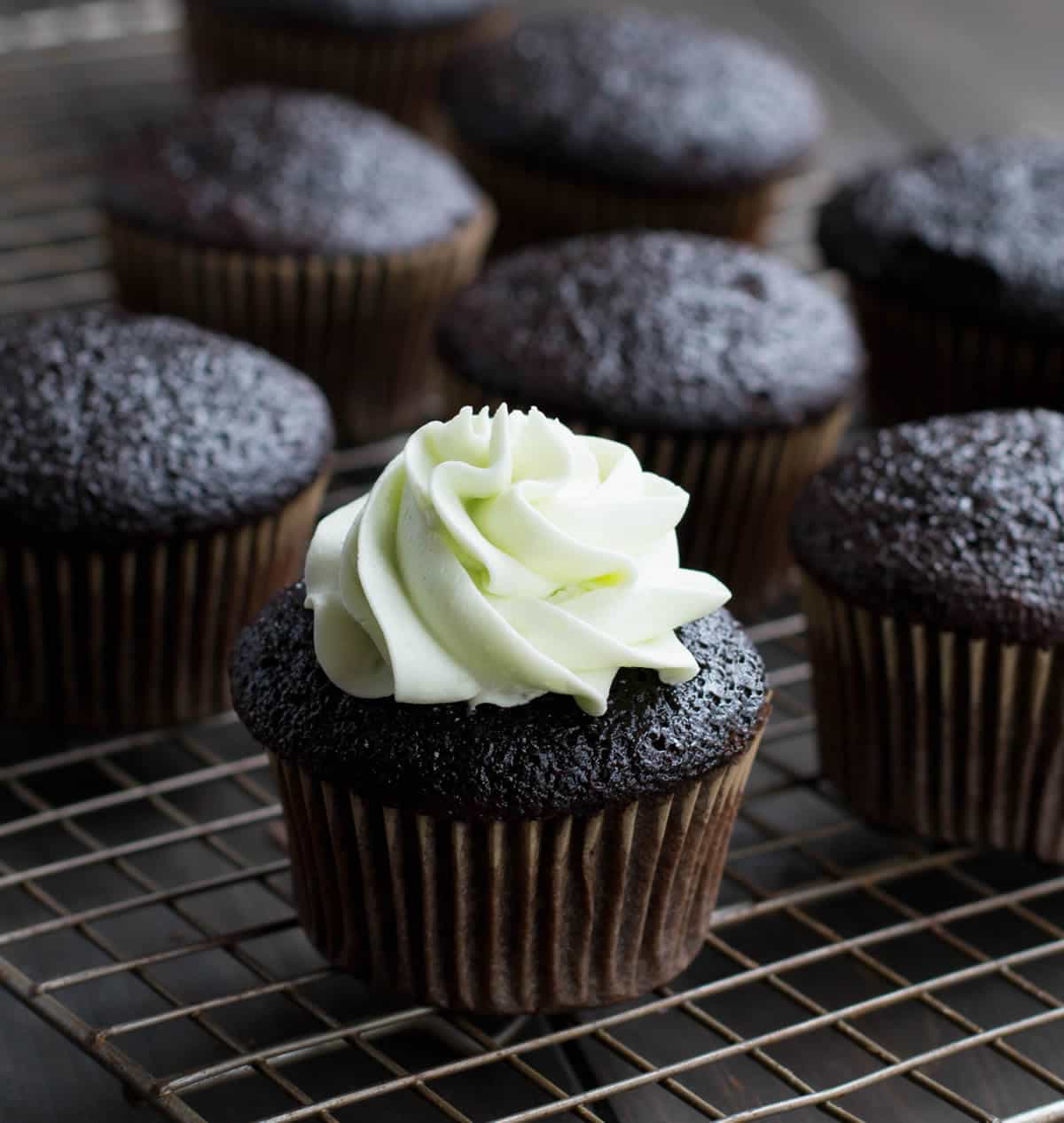 Bring it to a boil and let it cook for a full minute before removing it from the heat to cool. Placing a piece of plastic wrap right on the surface will help prevent a skin from forming on the top.

I usually make this part in advance and once it’s just slightly warm, stash it in the refrigerator until I’m ready for it either that same day, or the next. 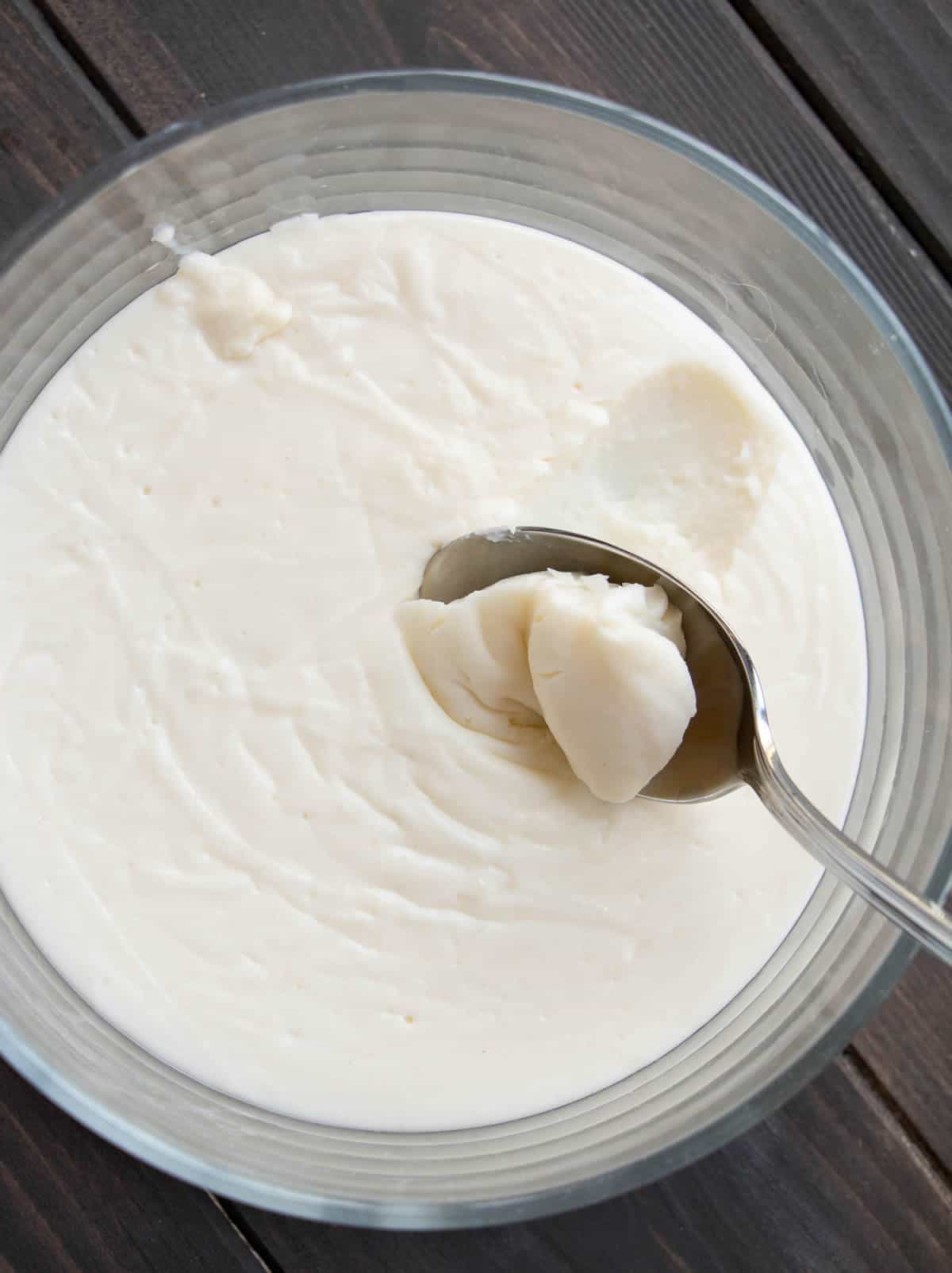 Once it’s completely chilled, you can see that it has solidified into a thick, but spoonable mass. It doesn’t have to be this cold, it just needs to be cool, but the timing of having it ready in the refrigerator works well for me. And, it only takes a few minutes to get that step out of the way.

Now, let’s talk about the temperature of your butter. We want soft, almost room temperature butter. It should still be a little cool. Thirty minutes at room temperature should do it. You should be able to press your finger into it and leave an indentation. I like to think of it as bendable. 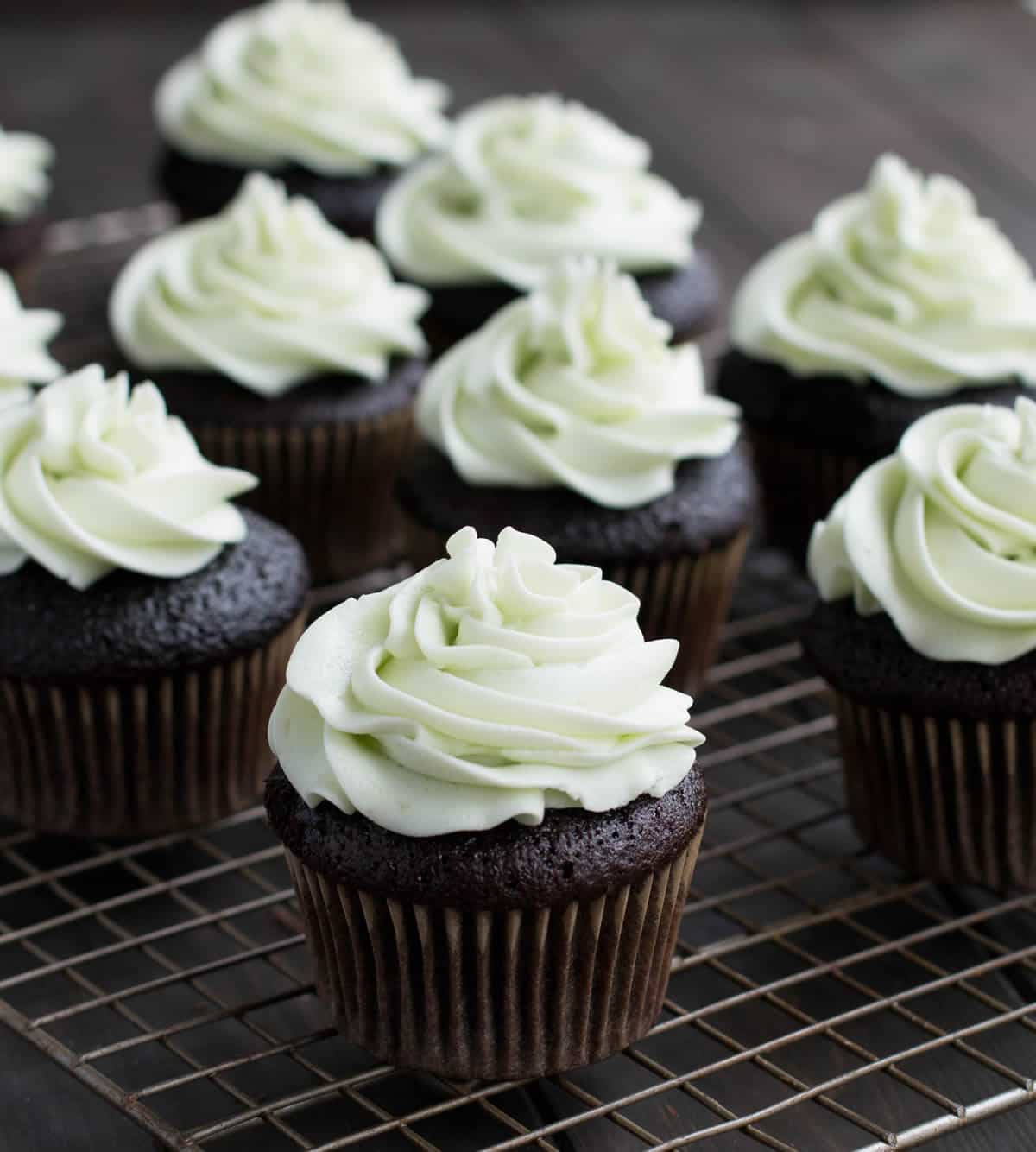 What we don’t want is butter that is so soft and warm that it can’t hold it’s shape. You shouldn’t be able to flatten your whole stick of butter with one light push of a spatula. If you can do that, your butter is too soft.

You’ll beat your butter, sugar, salt and flavorings for a few minutes until light and fluffy.

Then, you’ll begin to add your cooked flour mixture, one spoonful at a time, beating well after each addition. I usually give it about 15 seconds of beating after each spoonful is added. 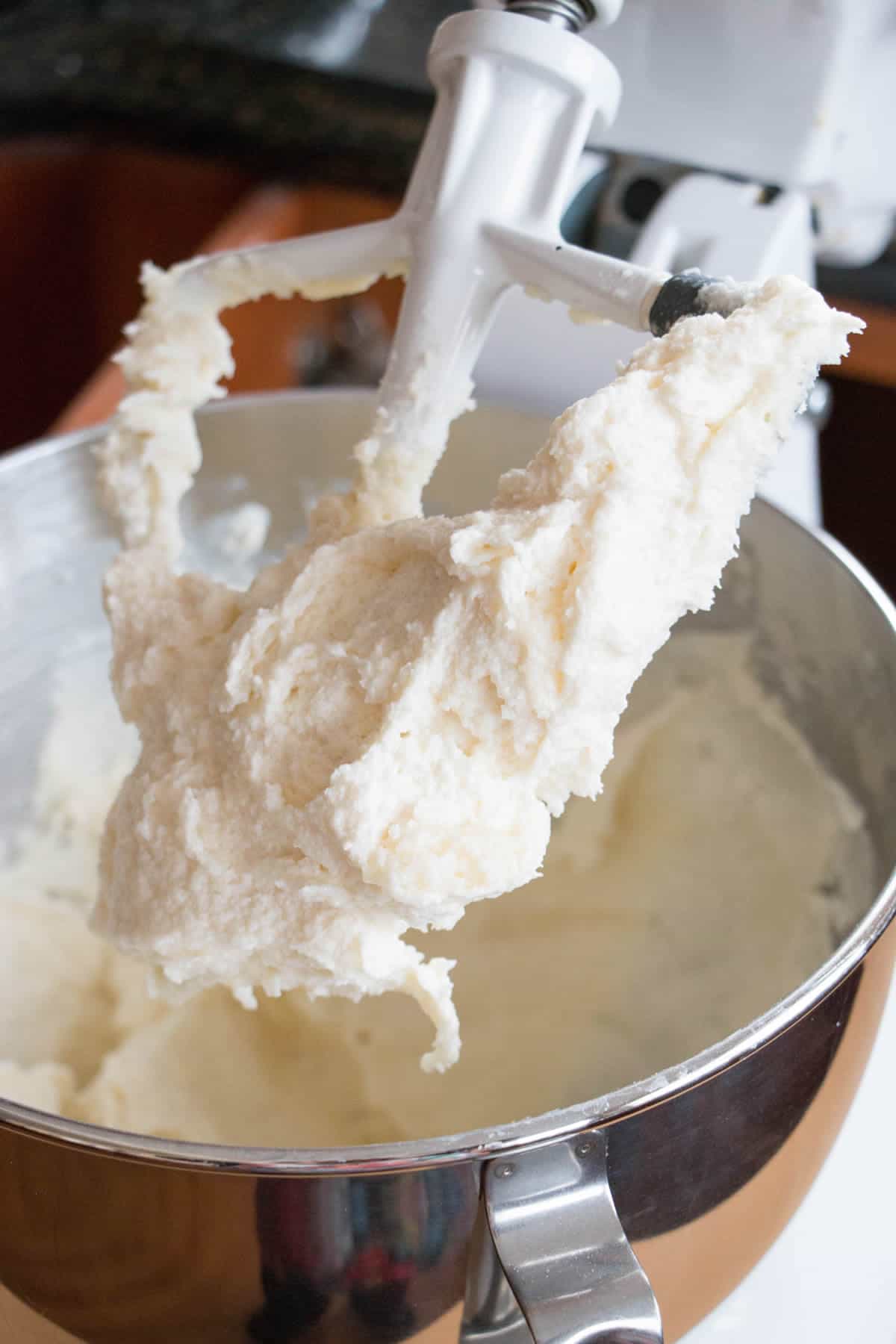 The mixture may curdle and look broken (see photo above.) Keep beating until it’s light and fluffy. This should happen no later than about 2-3 minutes after your last addition of the cooked flour mixture.

If it’s not coming together at that point, and by the way, this has happened to me more than once, your mixture might be too cold to emulsify, a possible issue should you make your flour portion really cold as I do. This is an easy fix. 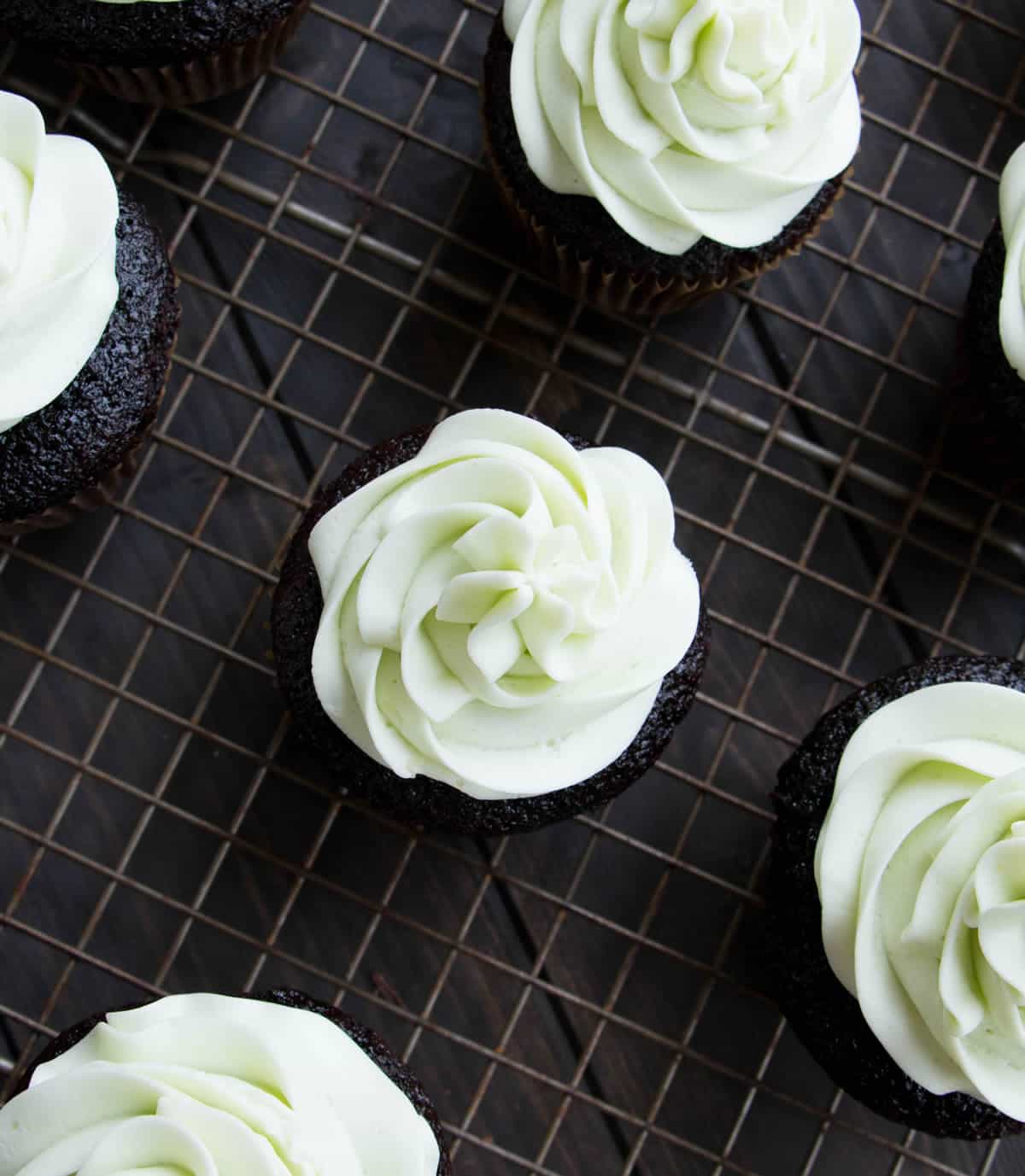 Just take a small spoonful (about a Tablespoon) out of the curdled mixture and heat it just until it melts. Add that little bit of melted frosting back to the main bowl and whip away. You should see the mixture change from curdled to fluffy and you’ll be good to go.

I chose to top these Dark Chocolate Cupcakes with this Whipped Peppermint Frosting. I can’t think of a better friend to mint than chocolate, don’t you agree?

When my husband bit into his cupcake, he said it was like eating a giant thin mint cookie. He also thought the frosting tasted “light.” I think that’s a high compliment, considering we’re talking about buttercream :) 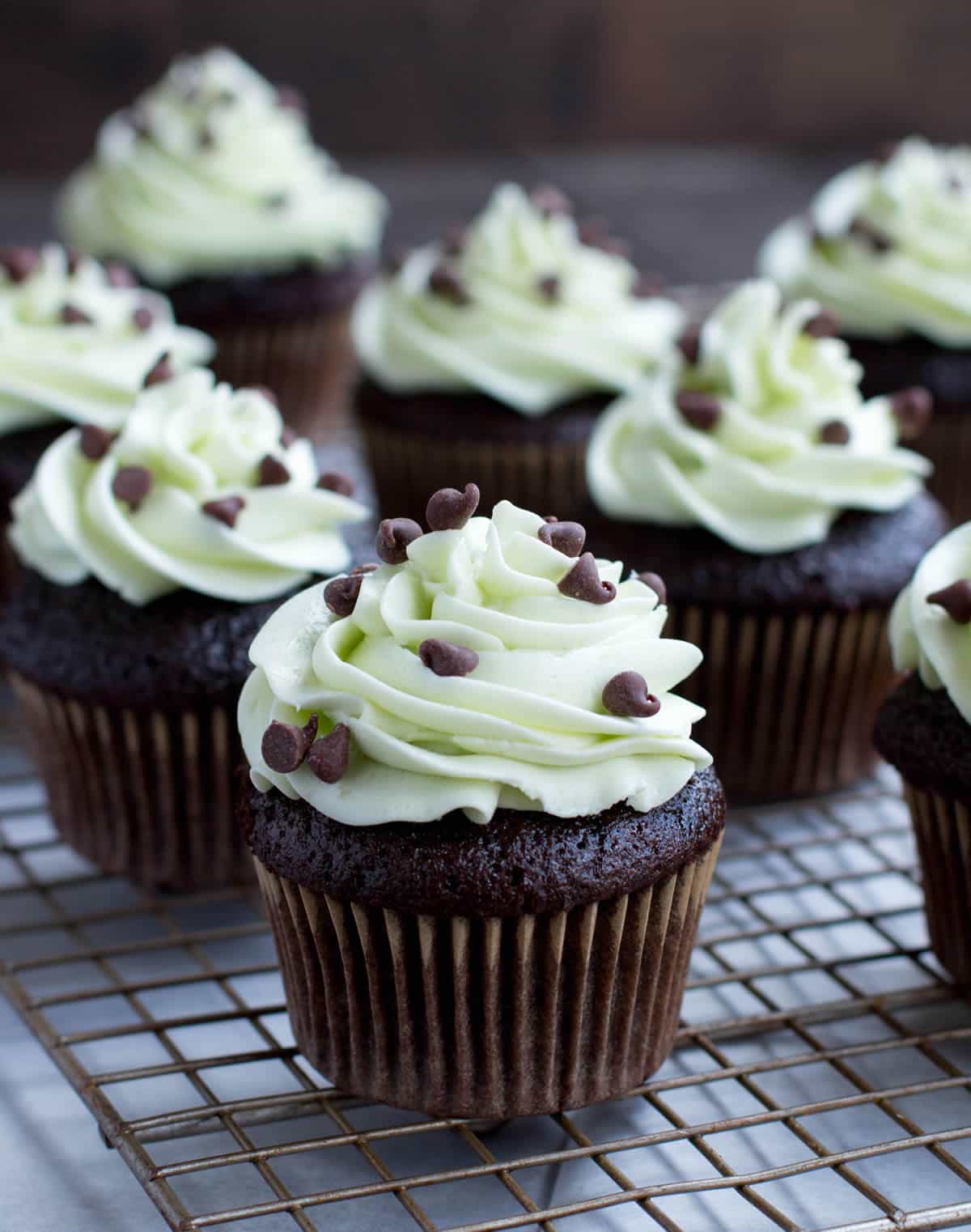 Of course, St. Patrick’s Day is also right around the corner, the day everything goes green, including the river that flows through Chicago. (Going green on that day sometimes seems like anything but being green) :/

Yeah, it’s not easy being green. Ah, but it is easy to make a deliciously Whipped Peppermint Frosting… 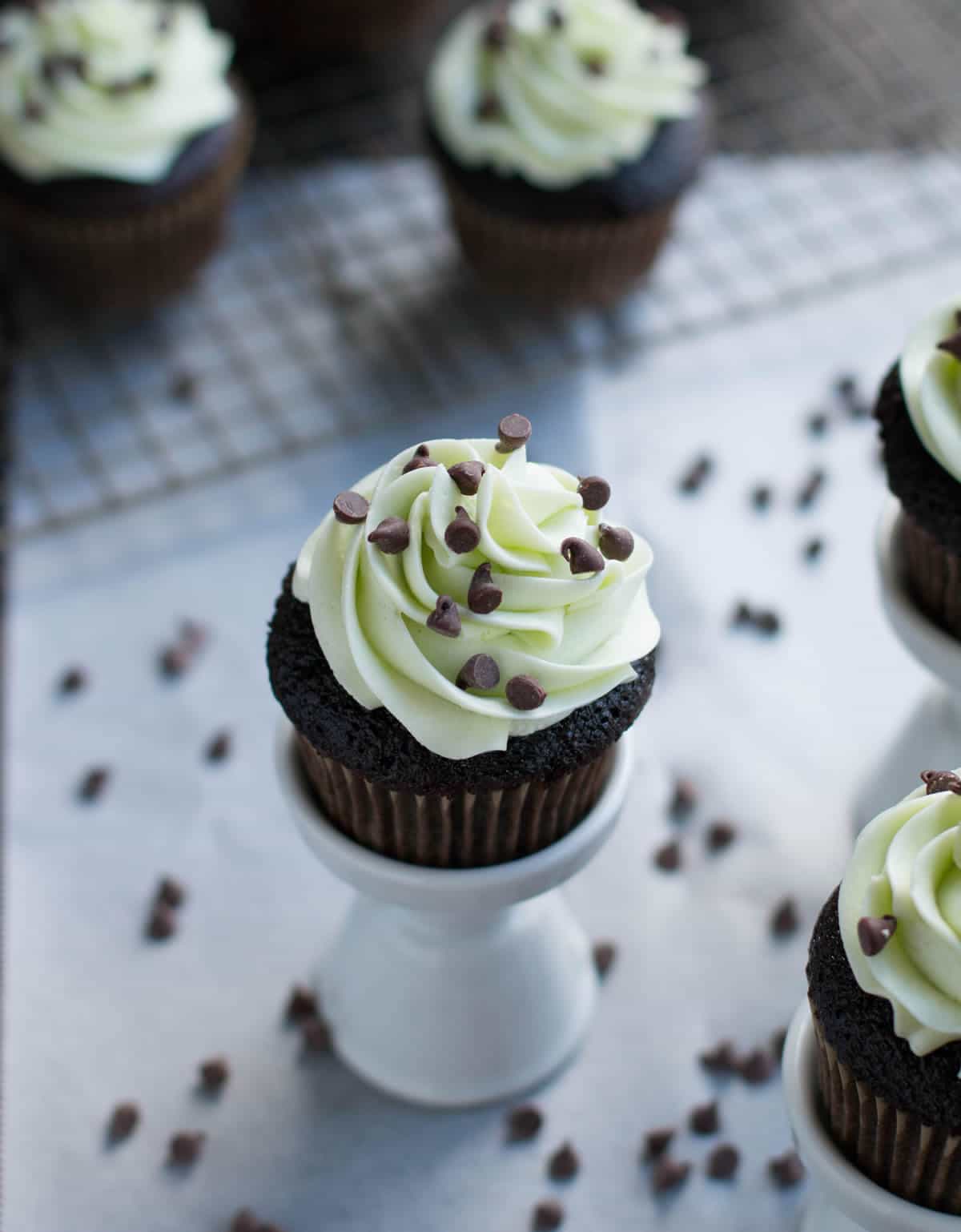 whether you choose to go “green” or not ;)

*You can see how much frosting I piped onto each cupcake in the photos. Even with that amount, I still had a good 3/4 cup of frosting leftover, so there's enough to pipe pretty generously.

*If you want enough frosting to frost and fill an 8 or 9" layer cake or 24 cupcakes, you'll need to double the recipe.

*Mint extract smells/tastes like spearmint, not peppermint. I made that mistake once. Avoid your frosting tasting like chewing gum and make sure you buy peppermint extract...unless spearmint is truly what you're looking for.

*Peppermint extract can be strong. 1 teaspoon was plenty for me to get a good mint flavor. You can add or reduce the amount to taste.

*This is not a frosting that I make ahead and store in the refrigerator before using. It's really tricky to get it to whip back up to it's wonderful fluffy self after it's solidified in the refrigerator. I opt to pipe it as soon as I make it and then store the frosted cake/cupcake.

Fantastic! I used this as filling for a chocolate cake and it turned out perfect - the chocolate cake recipe originally called for one of those too sweet frostings so I'm really happy that I found this to use instead! You've struck a perfect balance between the flavours.

The occasion was my parents' wedding anniversary, and I'm happy to say that they loved it :) Thank for sharing!

Tilda, you are so welcome! I'm so happy to hear that you and your parents enjoyed it! I'm all about frostings that are not too sweet. I have a few on the site that I just adore!

do you have to use flour and powdered sugar

For this recipe, you must use flour. It's a critical part of the frosting and creates the pudding like mixture that is so important to this recipe's texture and not too sweet flavor. And, no powdered sugar is used here, just granulated white sugar. Hope that helps!

Great recipe. I was looking for a peppermint recipe. I have made this type of cooked frosting before. If your butter is too soft, it comes out loose. Follow these instructions to the letter. If it's loose, put it in the fridge to firm up about an hour.

I made this recipe and it turned out buttery and chunky. This happened despite my following of the instructions. Horrible recipe and a waste of time.

I'm sorry that it didn't work out for you, but this is a tried and true recipe. It does require that ingredients be at the proper temperature, however, and that can cause some trickiness. If it's chunky, my guess is that your butter was not soft enough for the recipe. You can try the tip in the recipe to heat up a portion of it and mix it back in. There are fixes to save the buttercream, but they do require flexibility and patience. If you're willing to give it a shot, you might end up being able to fix the issue and enjoy some delicious frosting.

Thank you Ramona for the recipe and the beautiful presentation. I have a cupcake order this weekend and im planning to try it out. Can this be used under fondant?

Hi Mary, I'm not a fondant expert so I don't want to steer you in the wrong direction. I wouldn't risk it on an order until you've experimented with it. I'm not sure if it would have the stability you need for fondant. But, even if it's not your "go to" choice for using under fondant, I think you're really going to like it on it's own :)