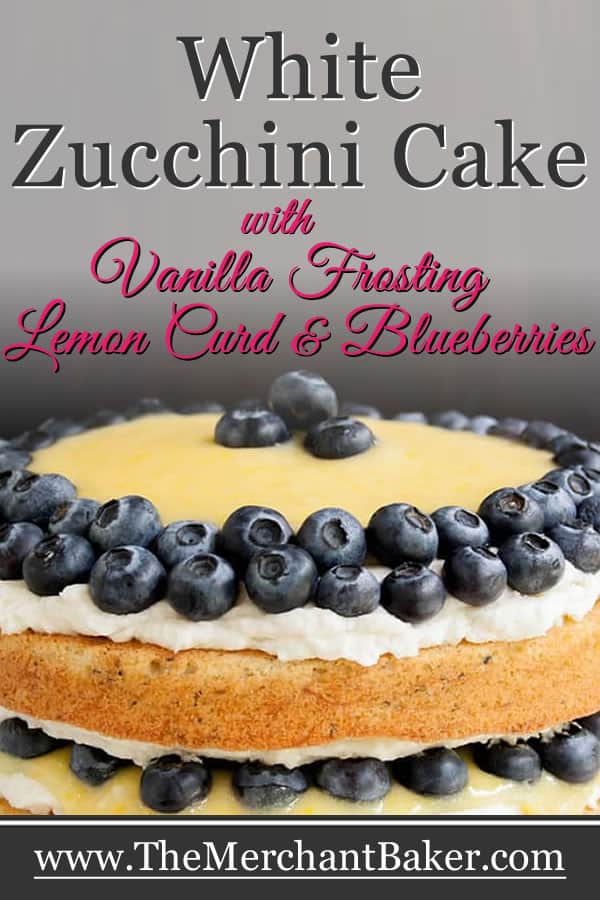 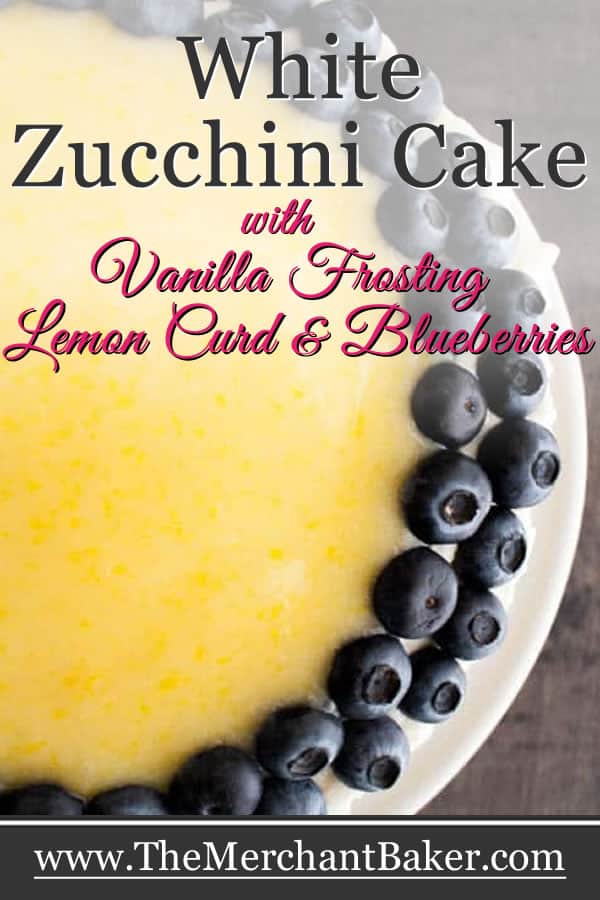 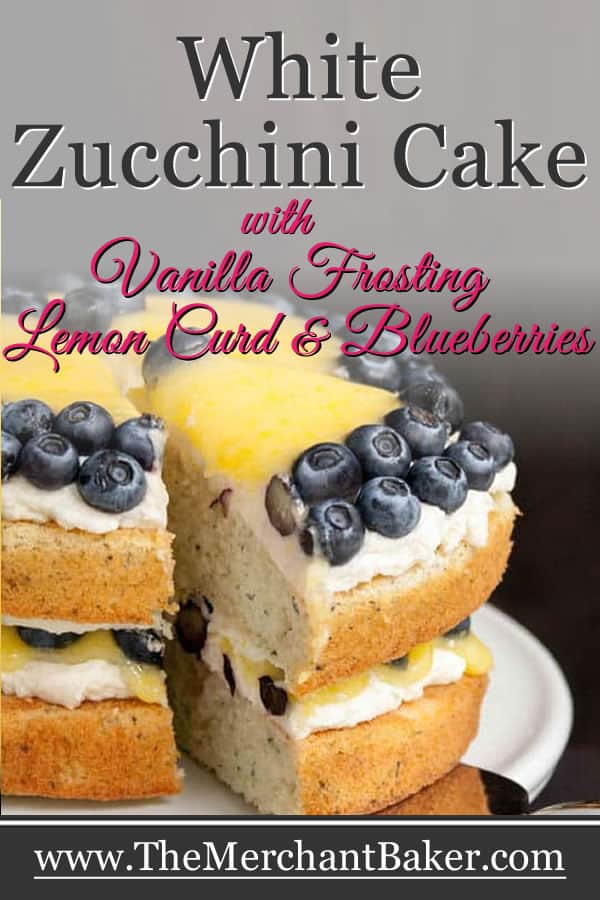 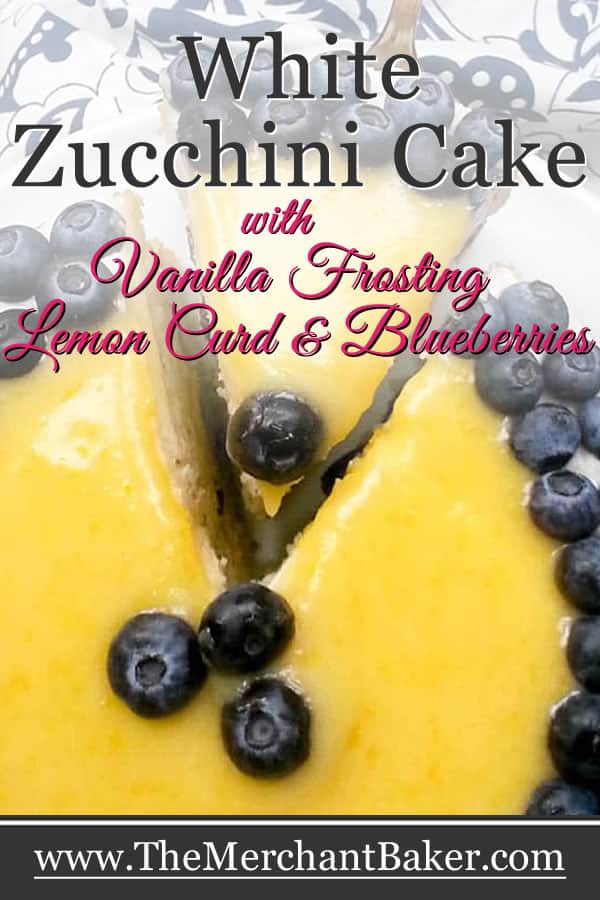 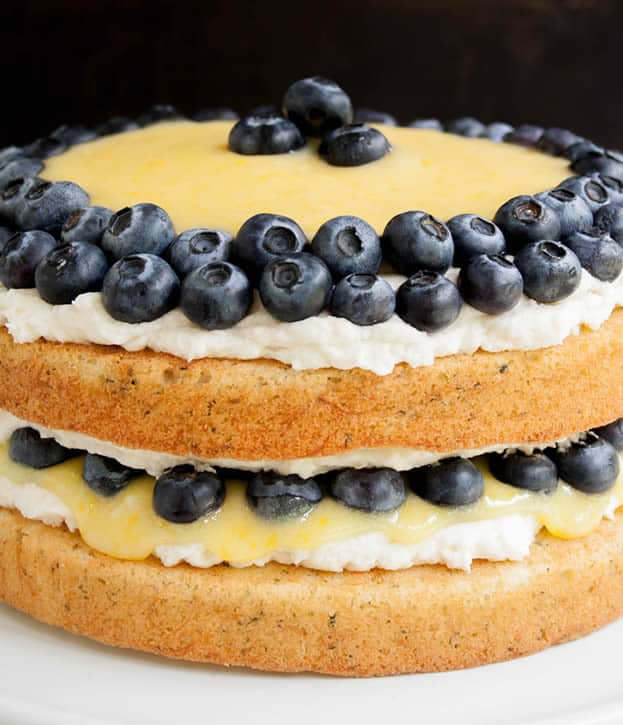 I’d always made zucchini cake as a chocolate cake and reserved non-chocolate zucchini flavors for breads and muffins. I’m sure it had something to do with camouflaging those green flecks within a deep dark chocolate cake so that no one would be the wiser. At least that was going philosophy when I was young and “zucchini cake” sounded like an oxymoron. 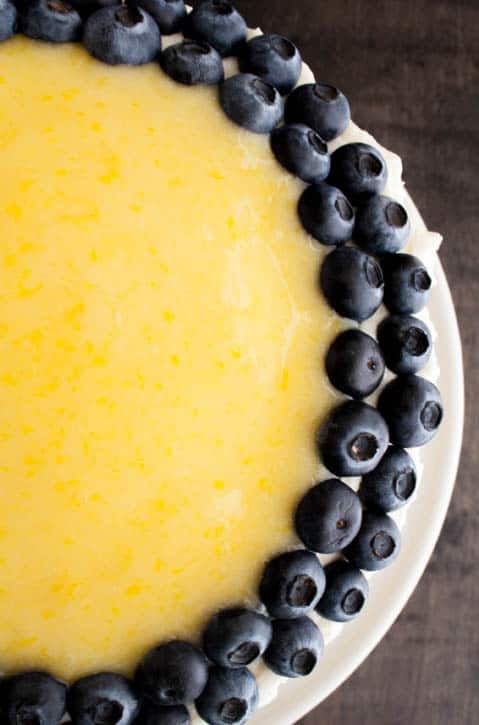 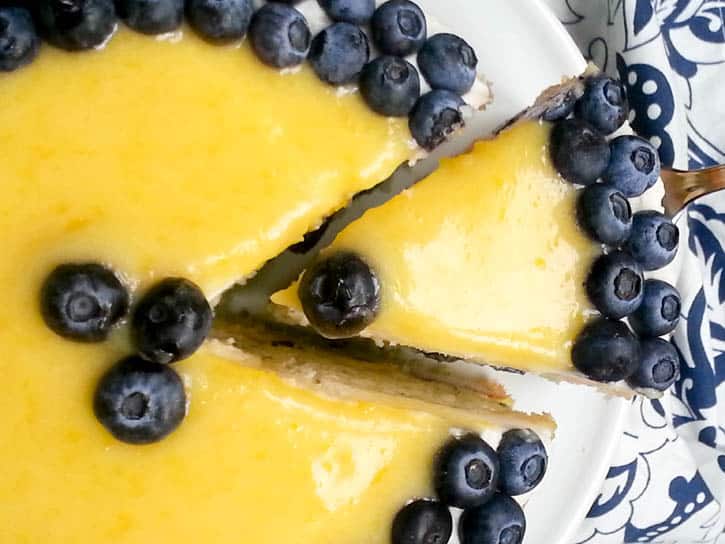 The first thing I noticed about the White Zucchini Cake recipe was that I would have three egg yolks left over. Three egg yolks always become fresh lemon curd in my house. Always. Amanda frosted her cake with chocolate frosting and topped it with fresh blueberries which I thought was a delicious combination, but since I knew I’d be making lemon curd and wanted to use it for the cake, I replaced the chocolate frosting with a Whipped Vanilla Frosting. 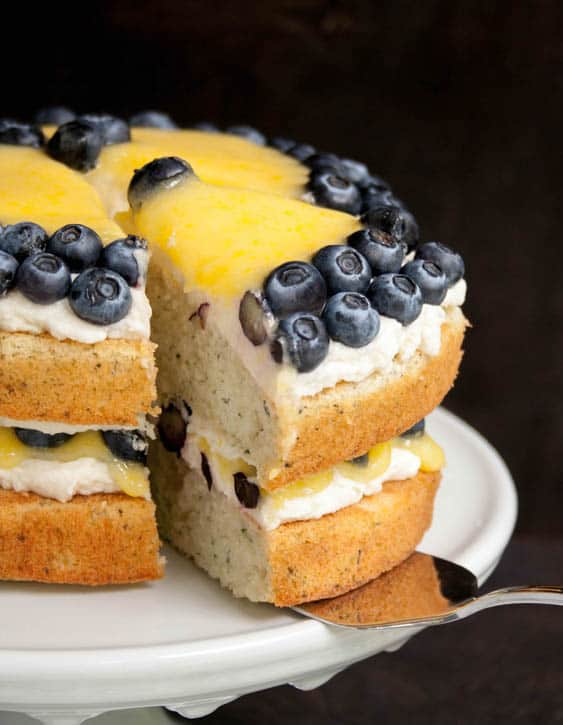 The frosting deserves a post of its own, but since I hadn’t decided to blog about any of this until after I baked the cake, I didn’t shoot any of the frosting making process. For those of you who have read the Whipped Cream Cream Cheese Frosting post or the Whipped Chocolate Frosting post, you know I am not a huge fan of frosting that is too sugary or too buttery. This Whipped Vanilla Frosting is the vanilla version of the Whipped Chocolate Frosting and it is another wonderful, not too sweet, not too buttery frosting. #howtooverusethewordfrosting 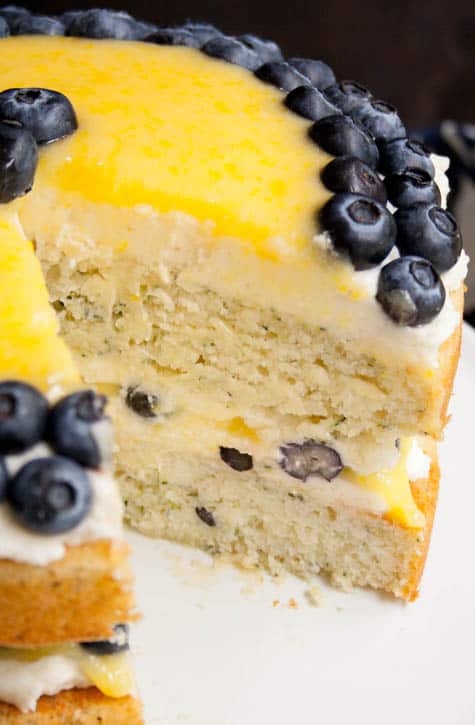 It’s a cooked flour frosting. It starts with cooking a flour and milk mixture until it becomes a thick paste. It smells exactly like Cream of Wheat while it’s cooking, but since you’re using flour, there are no grains, just a thick, smooth paste. Then you’ll whip up your butter, sugar, vanilla and salt, add the cooled paste and whip until you end up with a beautiful, light, fluffy frosting that will not send you into a sugar coma. It’s not complicated and the results are wonderful. It’s a perfect choice for this cake. 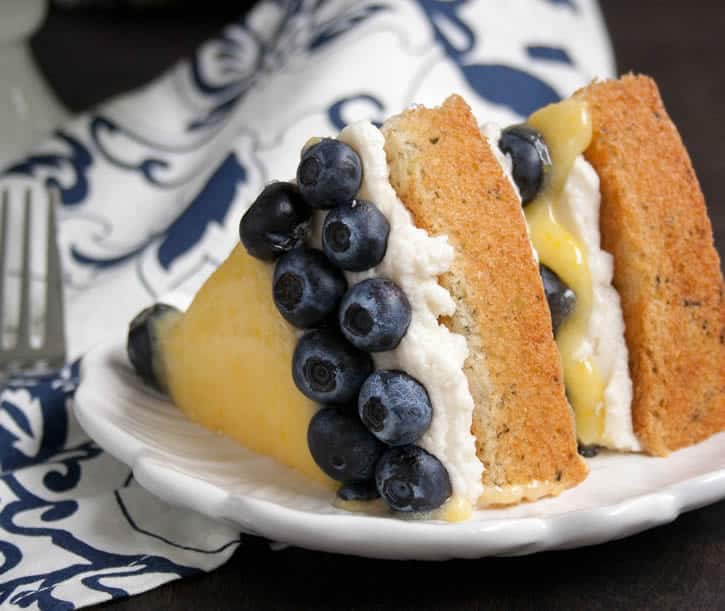 Okay. Back to the cake. The original recipe uses a yellow zucchini to keep the cake as white as possible.  I had green zucchini and didn’t want to peel it. I thought the green flecks would be beautiful with the yellow lemon curd and the deep indigo berries. And since I didn’t need to hide the fact that the cake had zucchini in it, I went green and never looked back.

I had no idea what the texture of this cake would be like but I wanted to try to make it as fluffy as possible, so instead of just mixing in the egg whites, I whipped them up and folded them into the batter. The cakes didn’t rise as high as I had hoped, but they were cooked perfectly so I moved on. (As you can see from the photos, they layered up to be plenty tall.) 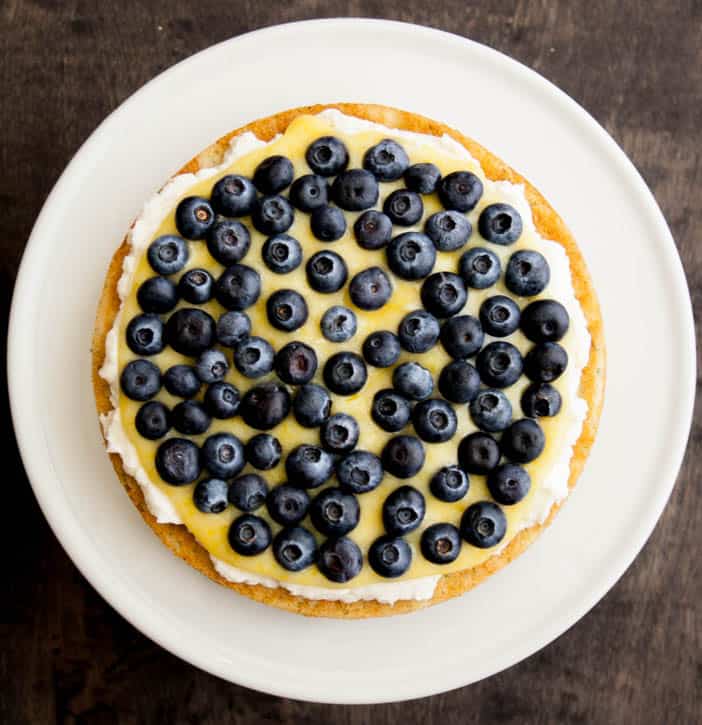 I had already decided I wasn’t going to frost the sides of the cake, so I started with a simple assembly. I took one of the cakes and spread some frosting evenly into a circle, leaving some room at the edge. I topped that with a layer of lemon curd and then completely covered the curd with a layer of blueberries. I wanted to insure that the berries stayed put, so I frosted the bottom of the top cake layer and pressed it on the berries which very effectively sandwiched them between the cake layers. 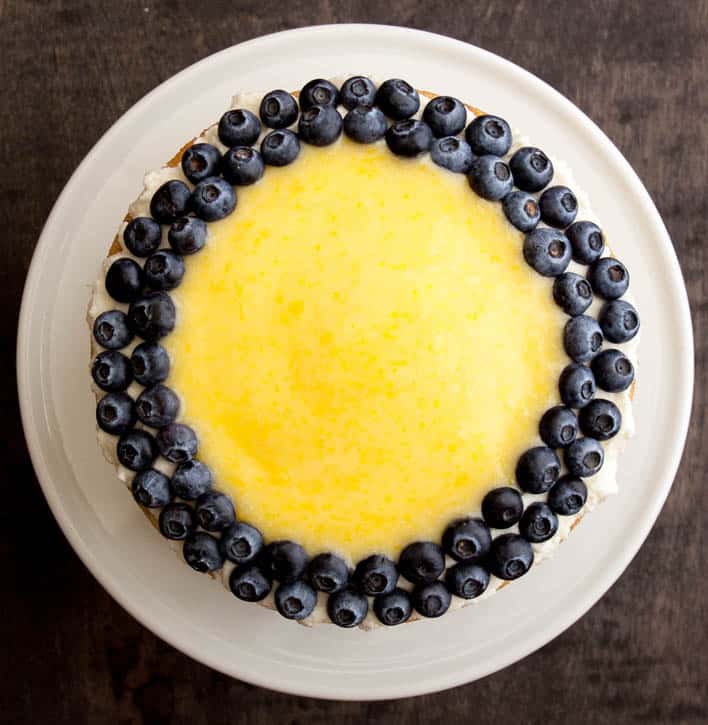 I repeated the frosting and lemon curd on the top and had intended to cover the entire top with berries, mimicking the layer I had just completed, but the lemon curd looked so pretty framed by the berries that I decided to go with a simple double row and stop there. (I had forgotten that Amanda had also done the same thing until I was setting up the links back to her post and then realized where that “inspiration” had come from :) 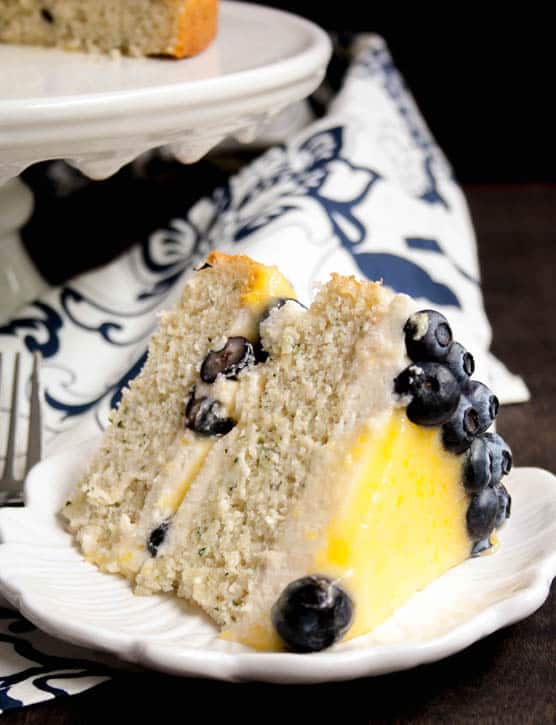 The combination of flavors was perfect. The cake is not super sugary sweet, so it balances well with the sweetness of the frosting and the sweet/tart lemon curd. The blueberries are the proverbial icing on top of the cake and add wonderful flavor and freshness. The cake itself has a texture that’s a little hard to describe. It’s not fluffy like a traditional white cake and yet it doesn’t have the texture of zucchini bread or muffins. It’s moist and dense and yet still has somewhat of a cake texture.

White Zucchini Cake with Whipped Vanilla Frosting, Lemon Curd and Blueberries. After I made the frosting and lemon curd, I thought I should take some photos, just in case it came out really good. Because if it was good, of course, I would want to tell you all about it. All I can say is that everyone (kids and adults) thoroughly enjoyed it… 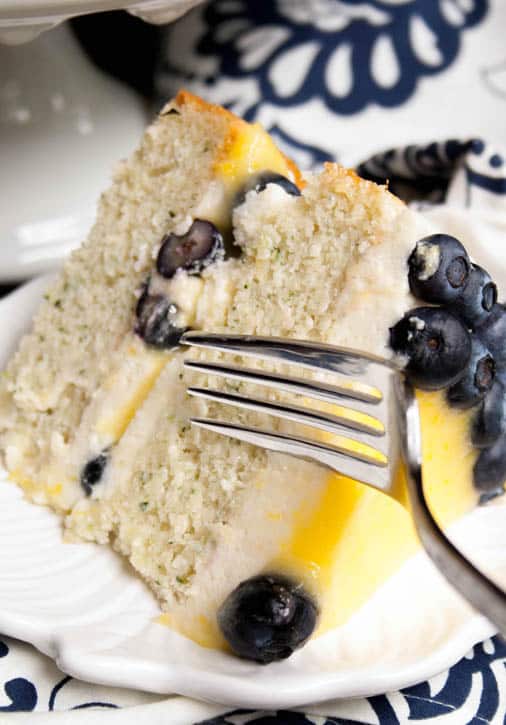 green flecks and all :)

For the lemon curd:

*Store cake in refrigerator, but allow to come to room temperature for serving for best flavor and texture.

*You can make the cooked flour portion of the frosting further in advance. In the recipe, I planned time for you to make it while the cake is baking and cooling. I actually made mine in the morning and stored in the refrigerator until I needed it later that afternoon.

I have done the chocolate version of this frosting & it’s my favorite! I am doing a mermaid cake for my little ones birthday & had two questions. Is this enough for a 9 inch round stacked cake? I want to pipe ocean wave swirls on the side... & have you ever tried to add melted white chocolate like you do in the chocolate frosting one? Just to give it a “white chocolate” flavor?

Hi Sarah, I would make a double batch to insure I had plenty for filling, frosting and piping. Piping always uses more frosting than you think. As far as adding white chocolate, I have not tried that. One of the reasons that I like this frosting is because it's not too sweet. White chocolate would simply add more sweetness to it and I'd have to adjust the sugar amount for my personal sweetness preference. That being said, I think you could use the same process as the chocolate to add more of that flavor. Or, you could make a white chocolate ganache and use that as the filling between the layers instead of frosting if you really want to drive that white chocolate flavor home. If you decide you like that idea, I'd probably let the ganache firm up a bit (through cooling) and then whip it with an electric mixer so that it fluffs up instead of creating a solid layer of ganache between your cake layers. The white ganache could also be fun for a colorful drizzle depending on your decorating plan. Good luck! Sounds like it's going to be a fun cake!

I have had success using a gluten free flour blend for cakes which I shall try with this zucchini cake ... Do you think the gf flour would work on the buttercream? Also I would love to be able to reduce the sugar for both the cake n cream ... How much can I reduce without compromising the stability of both? Thanks!

Cecelia, reducing sugar can be tricky for some recipes. I often try to reduce sugar in many of my recipes. I generally find that I can reduce it a little without any ill effects on the integrity of the cake. This particular cake doesn't start with alot of sugar to begin with. I can't guarantee your result without testing, but if I were to experiment, I would try 1/2 cup of sugar in the cake and see if I liked the texture and level of sweetness. For the frosting, I would try substituting the flour with half the amount of cornstarch. As far as reducing the sugar? I would just start by reducing by 25% and see if that works for you. Again, without testing it out myself, I can't guarantee your result. You'll have to try it out and see if you're happy with how it turns out. Come back and let me know what worked for you.

Aww, sorry! I'm not on Instagram. Gotta say no to some things to say the best yes, right? :) Thanks for sharing this recipe!

Kelly, I had no social media accounts (except facebook) until I started blogging, so I hear ya on that one!

I can't speak for the cake or the lemon curd (though I want to! nom!), but the whipped vanilla frosting was perfect. Came together exactly as described. I also tinted it red and blue for my son's Star Wars light saber cake, and it took the color beautifully. It also piped gorgeously, tasted great, and held up on a hot day (in shade). So it hit all my criteria for a frosting. Thanks!

Kelly, I'm so happy this worked out for you. This is a perfect not too sweet recipe and it comes out soooo creamy! If you're on instagram, post a pic of the cake and tag me. I'd love to see it! And thanks for sharing how it held up for you on a summer day. That's something lots of readers like to hear about :)

21 Tasty Ways To Use Zucchini | Recipes Worth Repeating