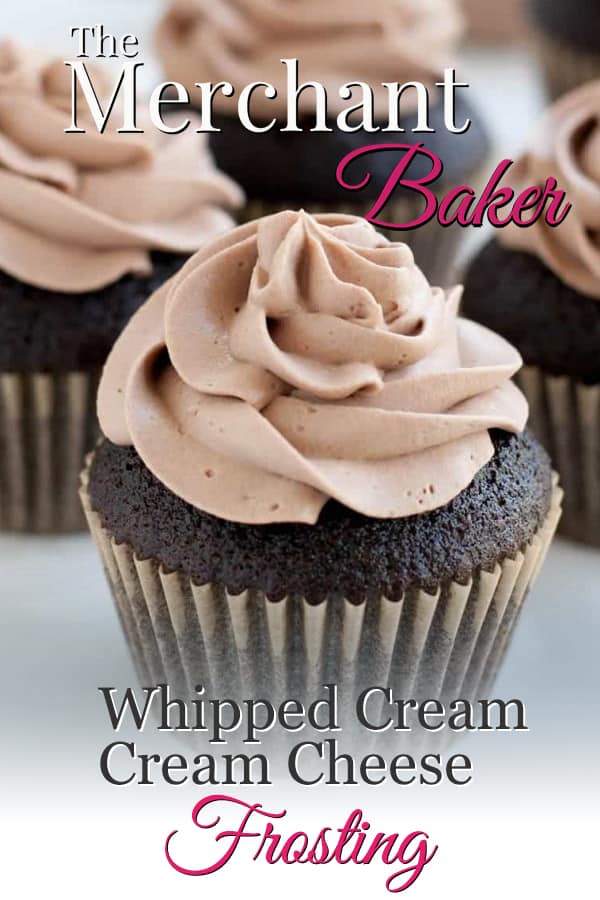 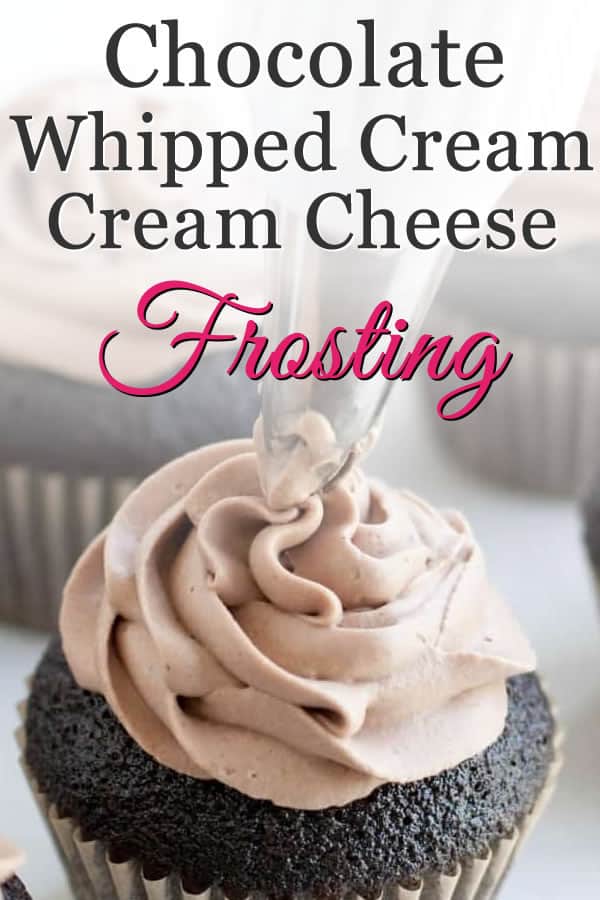 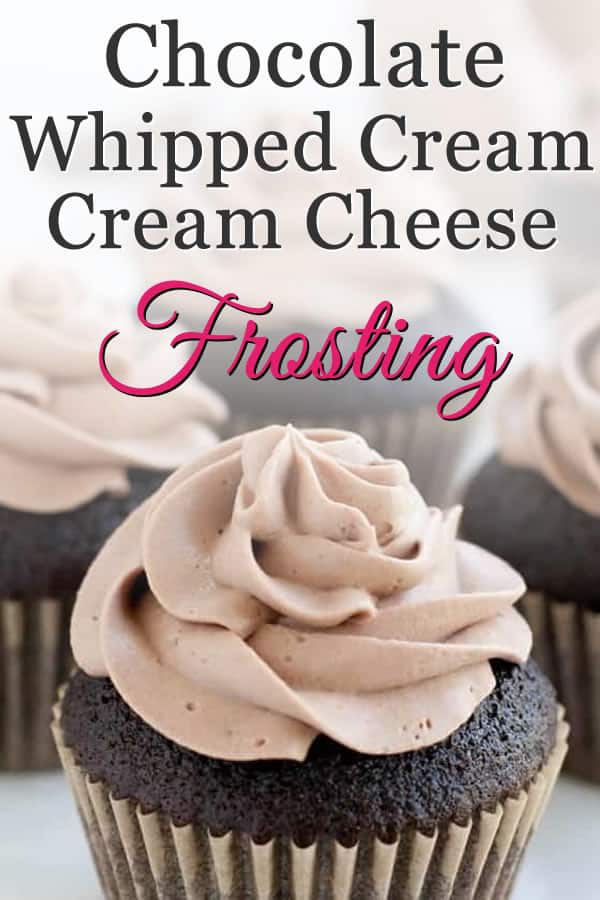 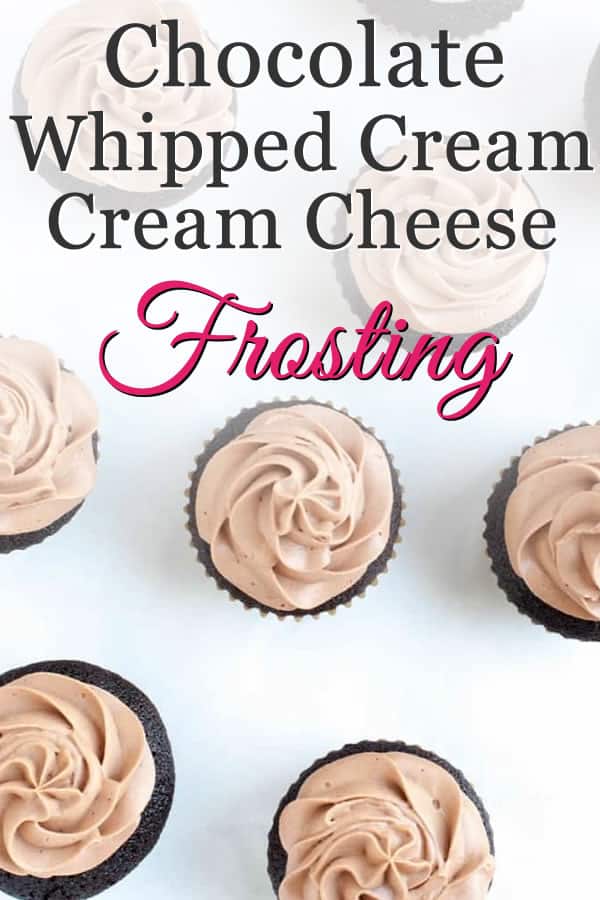 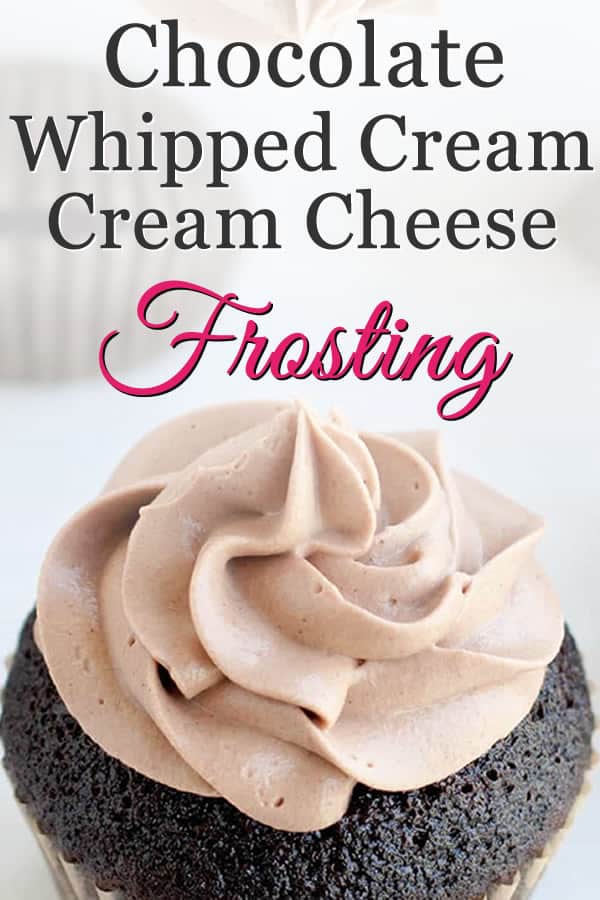 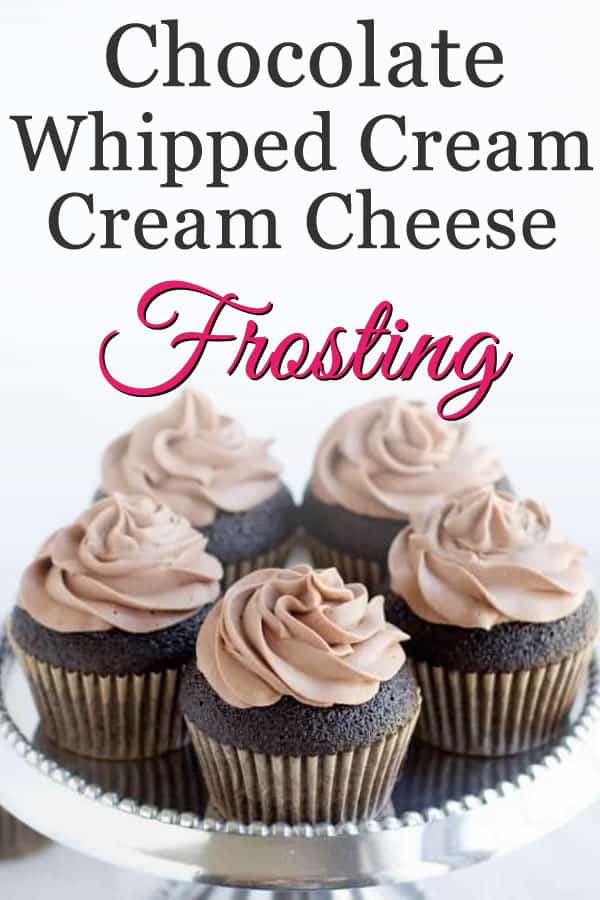 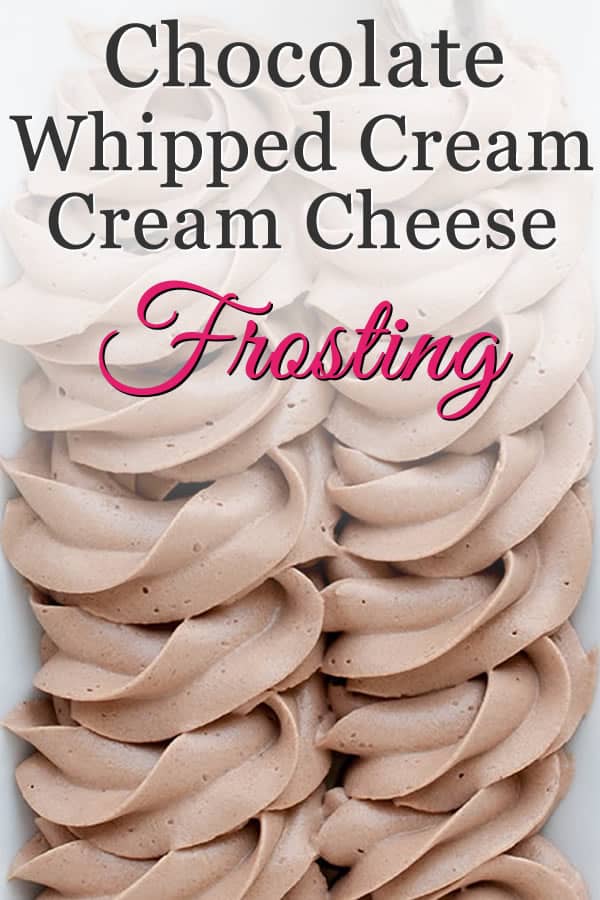 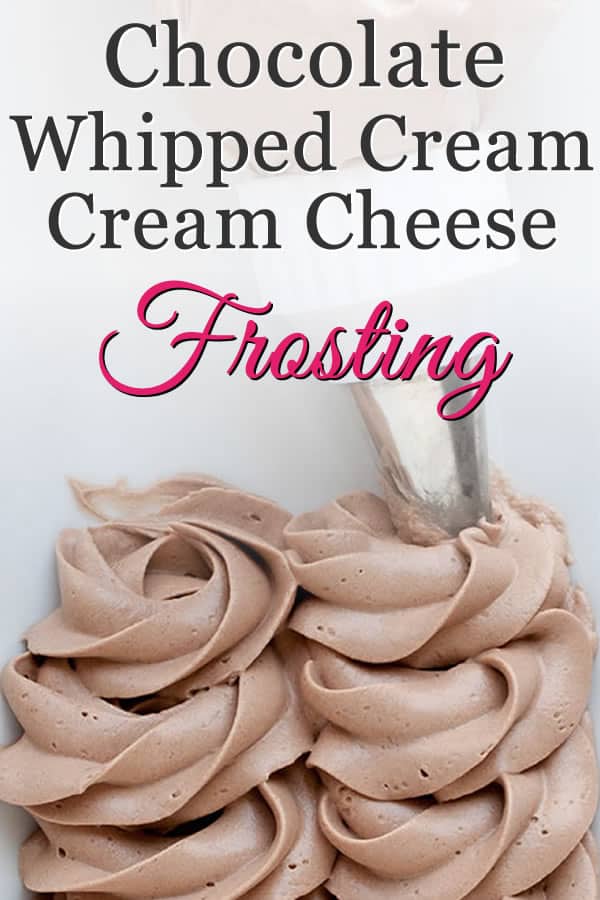 At long last, Chocolate Whipped Cream Cream Cheese Frosting is here! And yes. It is getting it’s very own post. If you’ve tried Whipped Cream Cream Cheese Frosting, you know what all the buzz it about. That wonderful, not too sweet frosting is our number one favorite frosting and is almost always requested as THE frosting everyone wants for their birthday cake. 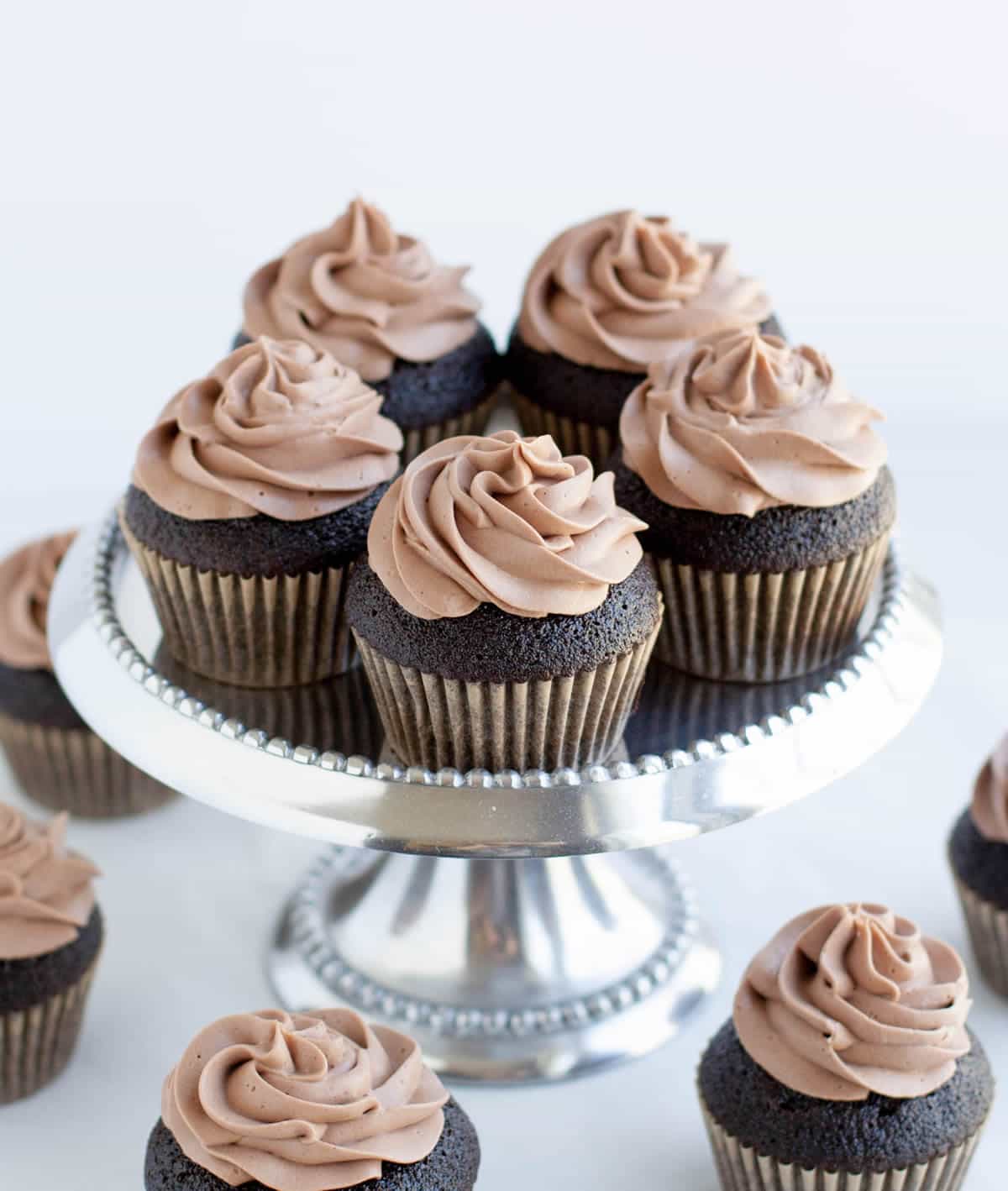 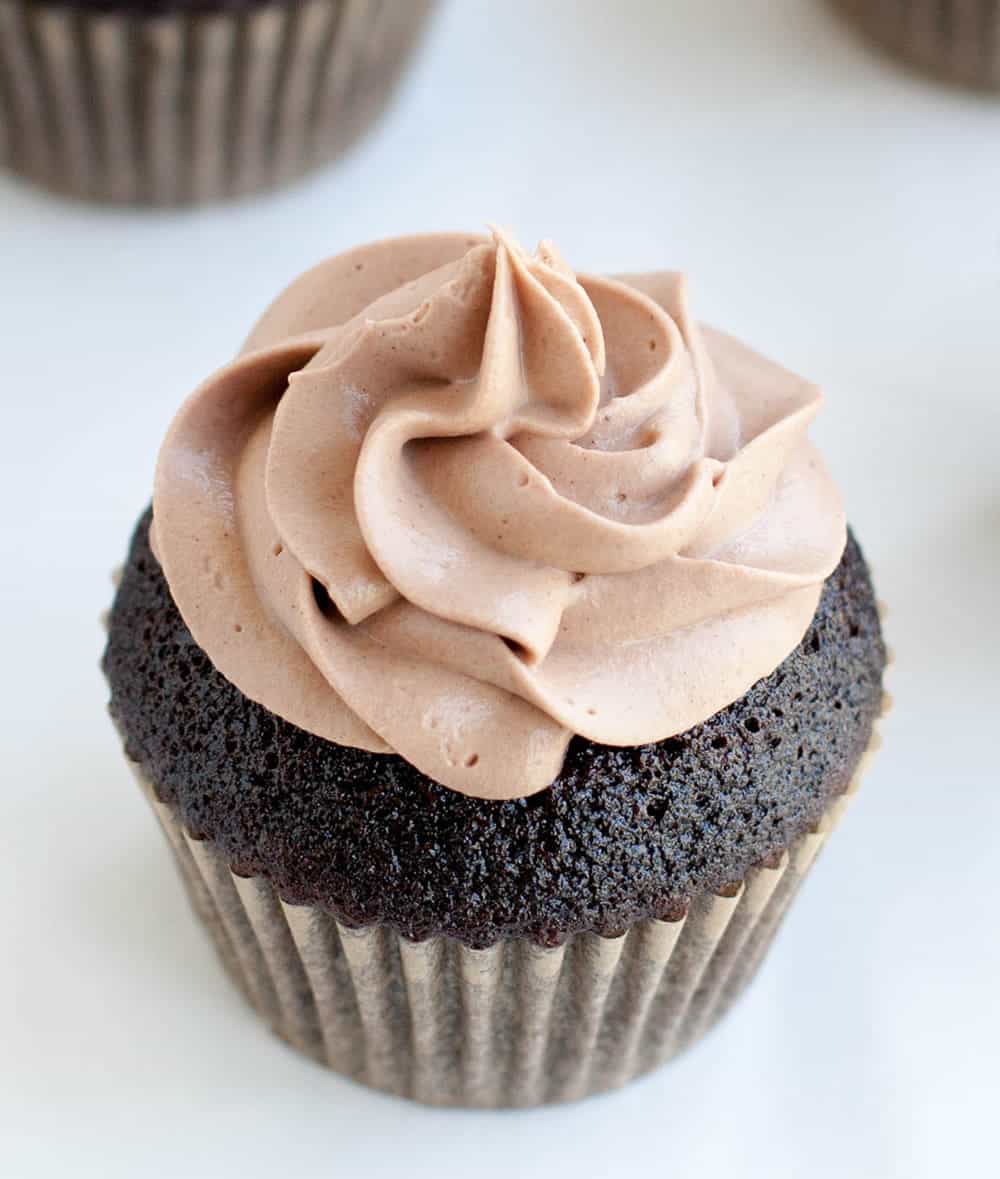 It’s the frosting that’s not too sweet. We are not fans of super sugary frosting. I, personally, just scrape it off if it’s too sweet for me. Not with this one.

This is the frosting that, when there are leftovers, promptly gets used to top fresh fruit, pancakes, oatmeal….spoons…you get the idea. It’s just that good. It’s the perfect “not too sweet” frosting. Read the post. All the details are there. 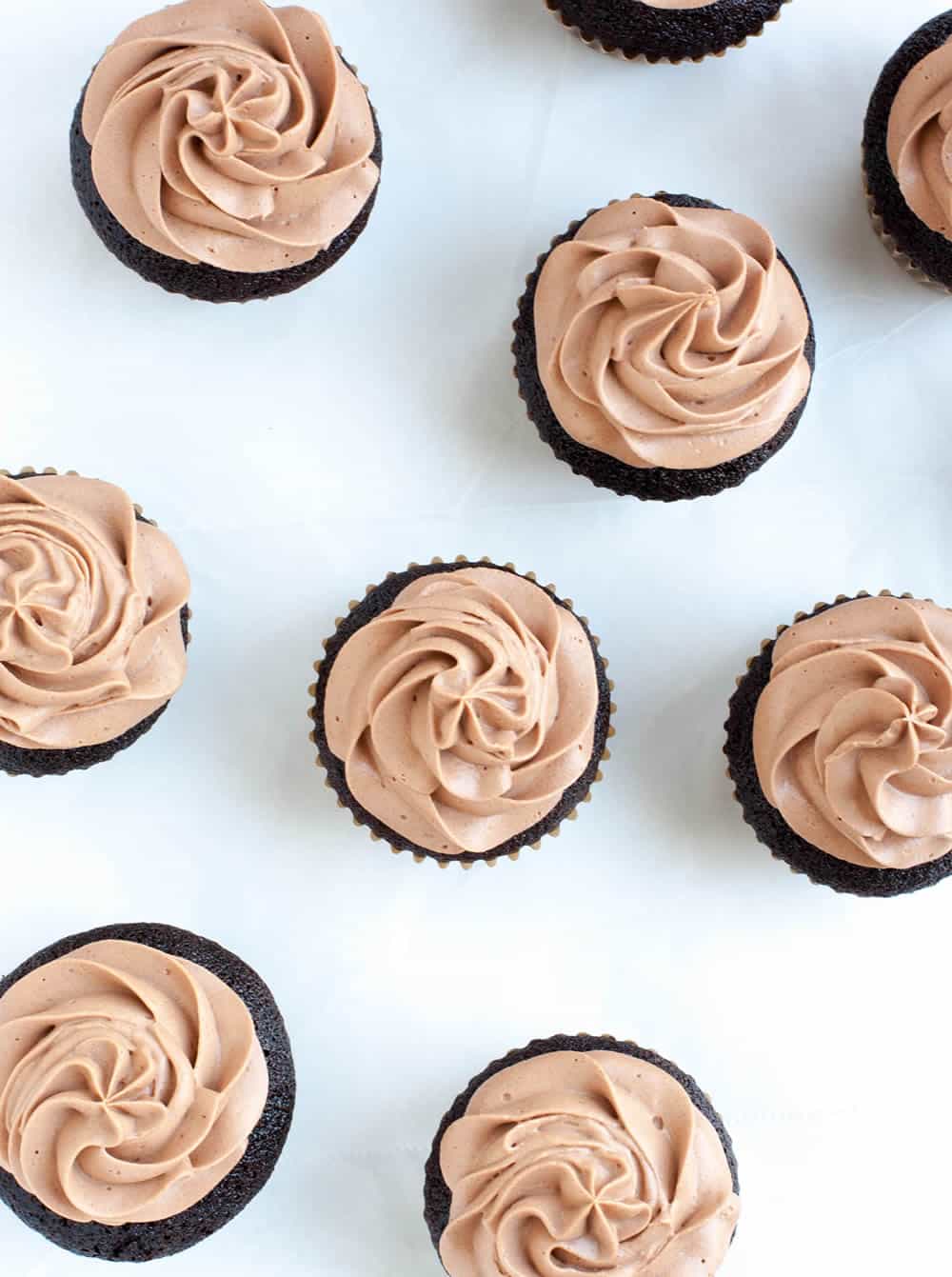 But chocolate? What about chocolate??? That’s what so many readers wanted to know. How do I make this chocolate? Well, it’s not like I haven’t made chocolate versions, but it was before the blog and I didn’t write down the exact measurements.

So I found myself coaching readers through their own process to figure it out, promising that one day I would write a post specifically for this flavor.

And today’s that day. Yes, my family has “suffered” through a couple of trials on the best way to make this favorite frosting in chocolate. It was actually three trials.

The good news is that while I didn’t think the others were the perfect “ying” to the “yang” of the original, they were so good in their own right as totally different kinds of frosting that I’m going to have to make them again someday and post them as well. 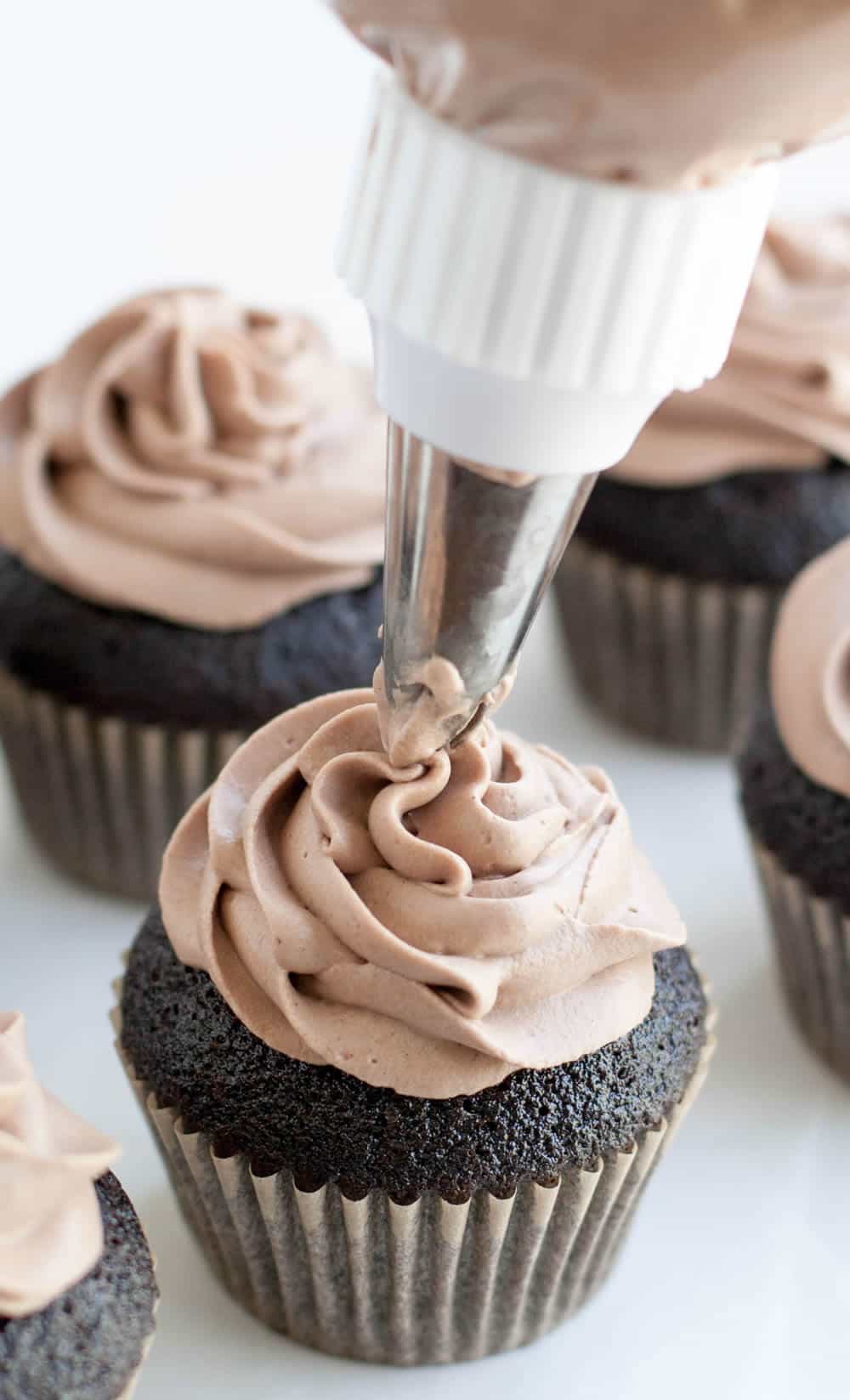 What I wanted was a mellow chocolate version of the original. This is not meant to be a super chocolatey fudgey frosting (which, of course,would also be delicious.) Instead, this is the perfect sibling to the creamy and light tasting plain vanilla version.

I decided cocoa was really the best option for achieving that. It was also the easiest. One of the beauties of the original frosting is that it can be made in one bowl. When we use cocoa to flavor it, there are no additional steps of melting chocolate and cooling it…etc. 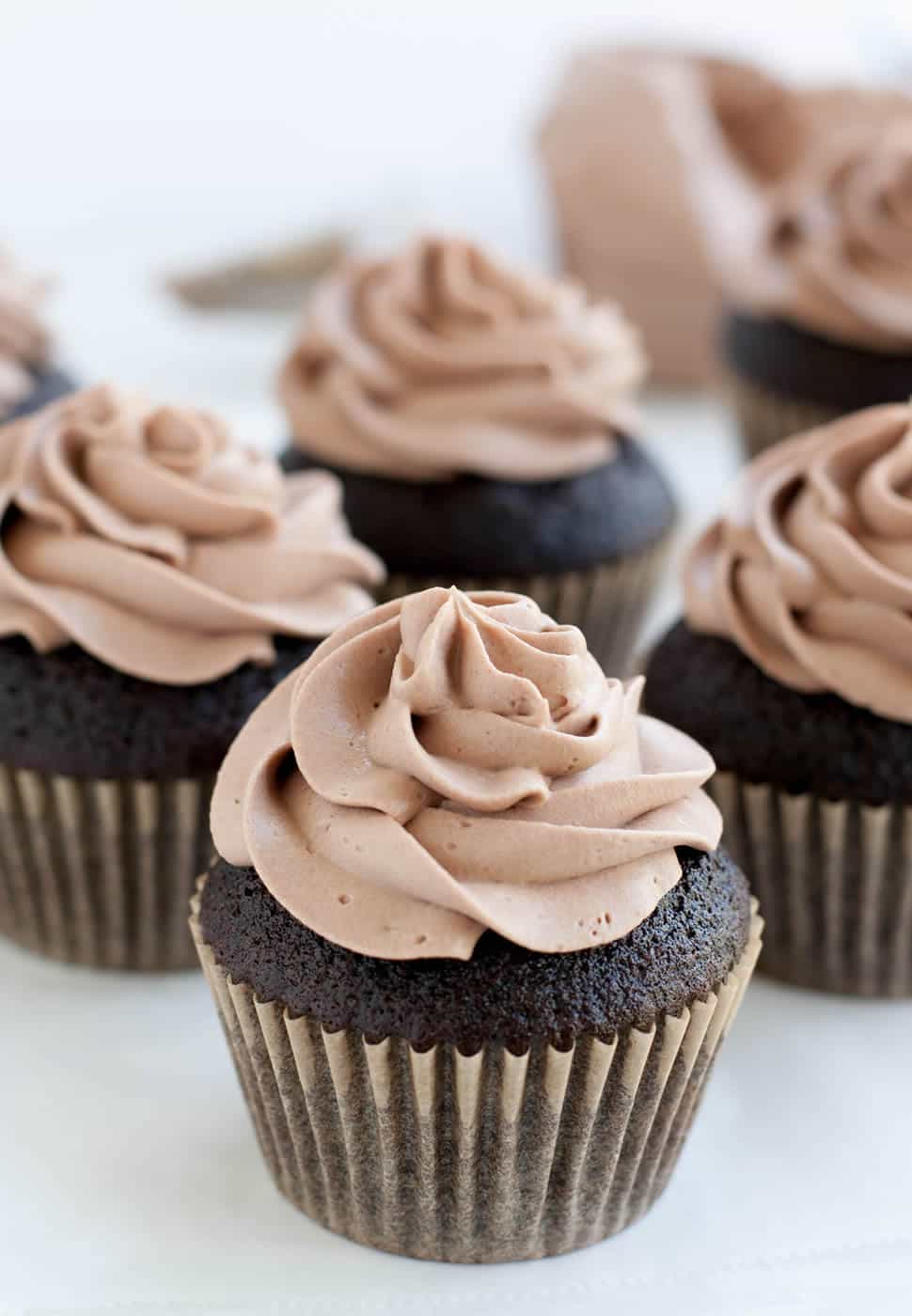 There is a slight change in how it is prepared, though. We start with a paste. We’re just going to mix a little of the cream into the cocoa so that it can more easily incorporate into the cream cheese.

What happens if you don’t do that? Well it will still work, but you’ll have cocoa flying out of your bowl and the powdery cocoa will coat the cream cheese.

As you beat it, the cream cheese will form marble size balls, all covered in cocoa that just roll around your bowl while you beat it. It will look, um, let’s just say, unappealing.

And while it’s looking all yuck in your bowl, you’ll wonder if you’ve just ruined everything. You haven’t, it will just take a heck of a lot longer to beat it into submission. It’s not worth it. 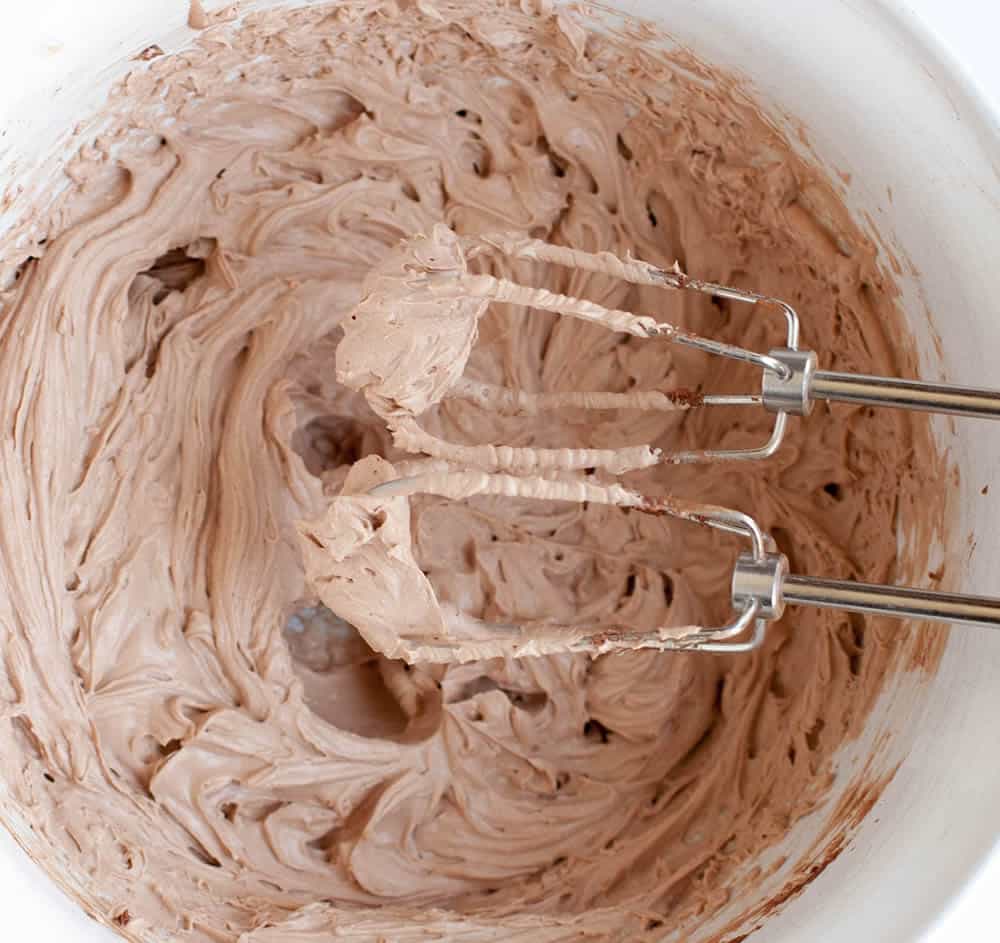 But I do have a photo of the creamy bowl of yum you’ll end up with. (The photo above is from a half recipe.)

I’ve never timed it, but I think I make this frosting in less than 10 minutes. There are not a lot of ingredients. It’s one bowl. You don’t have to wait for anything to come to room temperature.

In fact, you want everything cold. I know some will say that the cream cheese needs to come to room temperature like it would for cheesecake. But not here.

You want it cold so that it keeps it’s shape. If you let it come to room temperature, your frosting may be much too soft to pipe. I always use Philadelphia Cream Cheese and it always whips up perfectly from cold. Other brands just don’t work as well. I’ve tried them. 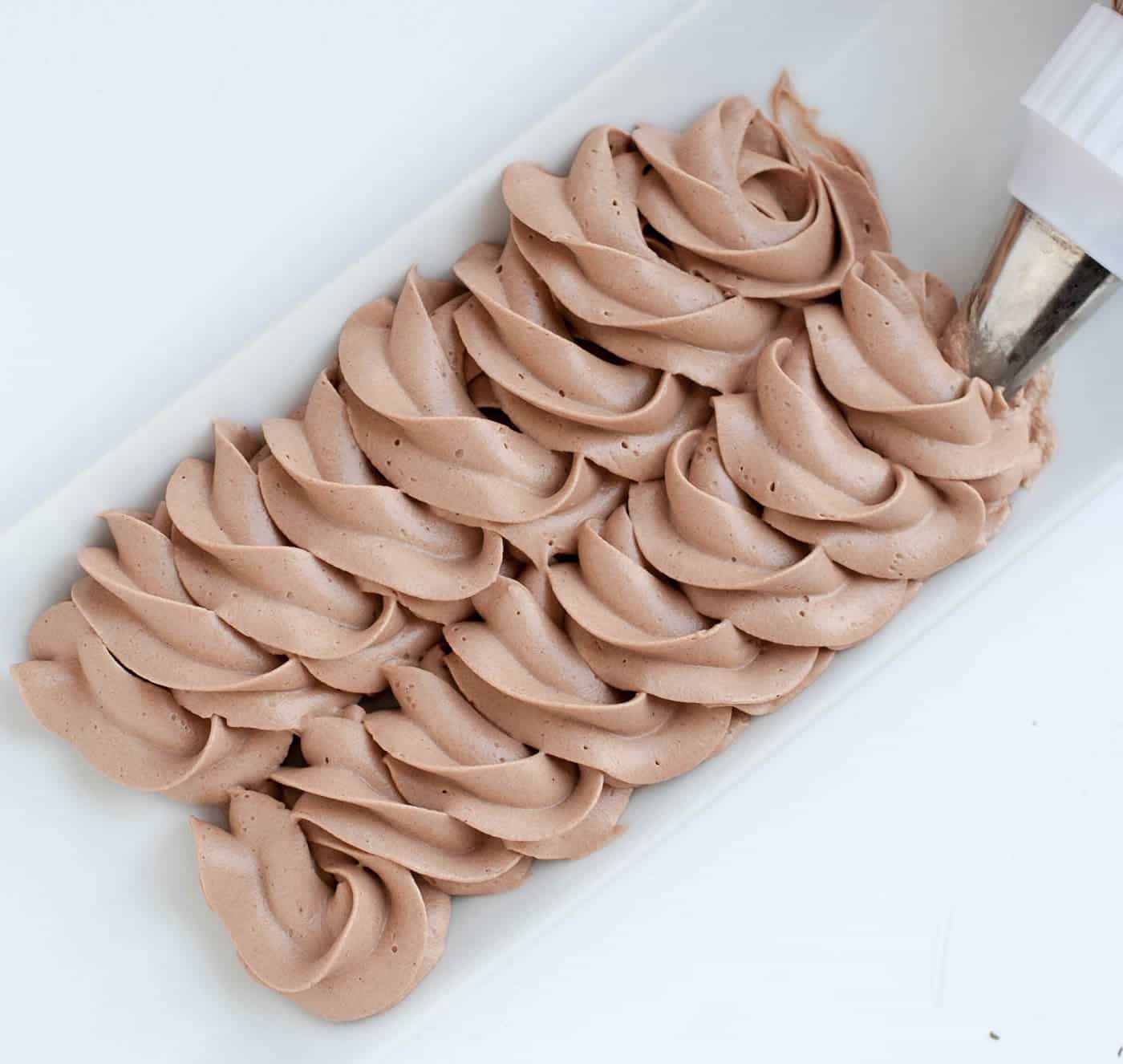 Minutes later, when you’re finished whipping the mixture to stiff peaks, you’ll have a lovely frosting. It’s creamy, it’s chocolatey and, it’s not too sweet. It’s perfect on top of the Dark Chocolate Cupcakes that I’ll be sharing in my next post. And it will be perfect, pretty much, on top of anything.

I could have just added directions for a chocolate version to the original post, but come on…look at this Chocolate Whipped Cream Cream Cheese Frosting… 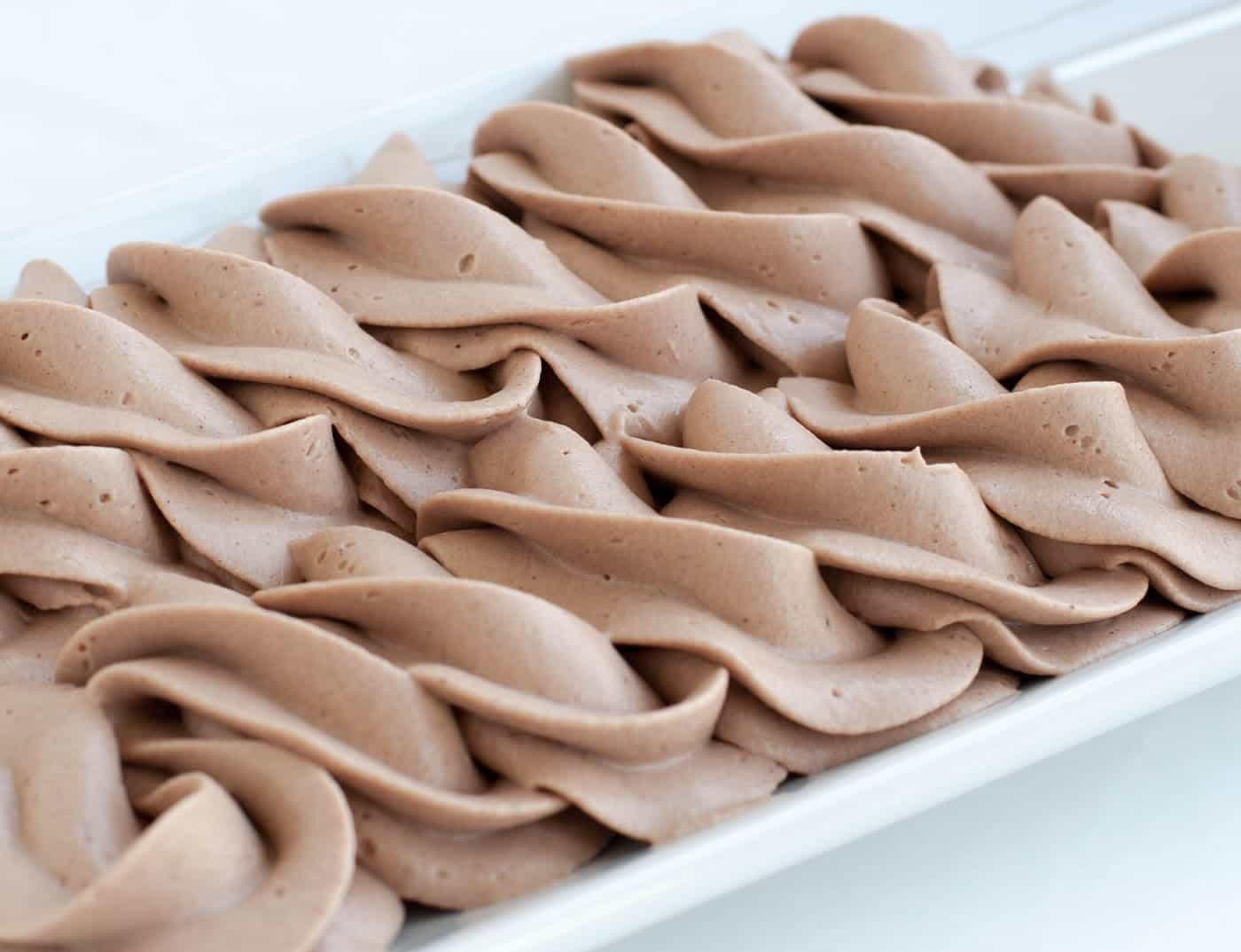 A picture really is worth a thousand words.

Wait! You don’t want chocolate? Here’s the link to the original flavor of this amazing frosting!

* I love my stand mixer, but I prefer using a hand mixer for this recipe.

*You can use the one bowl method OR the two bowl method for this recipe. See details in the updated notes section below the recipe card.

*You can use any kind of unsweetened cocoa. For today's post, I used Hershey's.

*I normally use 3/4 cup of sugar when I make the original (not chocolate) version of this frosting. For the chocolate version, it seemed to need the full cup of sugar to balance the cocoa. If you're not sure, just taste the cream cheese mixture with 3/4 cup of sugar, then add more to adjust to your level of sweetness. Do this before you add the cream.

*As you can see, you can definitely pipe this frosting. I did find it just a little bit softer than the non-chocolate version, so you want to work quickly and keep everything cold for best results when piping or frosting. If I have leftovers, I usually leave them in the piping bag and place the piping bag in a Ziploc and store in the refrigerator up to 3 days. It still pipes nicely one day after storing, however, I've only used that option for leftovers that I might pipe as a quick topping. I would never plan to pipe my cupcakes or cake with made ahead frosting. I ALWAYS pipe as soon as it is mixed.

*If I have leftover cake that has this frosting on it, I slice individual pieces, wrap in wax paper and place the wrapped pieces in a freezer Ziploc bag. I either thaw in the refrigerator overnight, or allow to thaw at room temperature for about 30 minutes, or very carefully use the microwave on a 50% power setting. You want to thaw the cake without melting the frosting.

*Many readers have asked about leaving this frosting out at room temperature. Here's the response I've given...It depends on how hot it is. When I use this recipe, I always keep my frosted cake/cupcakes etc... refrigerated until I have to take them anywhere, but they’ve been out up to two hours (in air conditioning or cool weather) and held up well, though I think they’re probably best up to one hour. I don’t like to leave anything perishable out more than two hours anyway. I wouldn’t leave them out for long at a hot picnic or in very warm weather. I actually like to take my cakes out about 1/2 hour or up to an hour before serving so that they can lose the chill of the refrigerator and the cake isn't too dense from being cold. So, I try to serve the frosted baked good almost at room temperature. But this is not a recipe I would leave out for hours and hours at a party. My Whipped Chocolate Frosting recipe is perfect if you need something that can live for a longer time at room temperature.

A few readers have had issues with this not whipping up properly. I do mention in the recipe that this does mix up a little softer than the original, but as you can see in the photos, I was still able to pipe it. I stored my cupcakes in the refrigerator and the piped frosting firmed up just as it does with the original version.

Now that the weather is getting warm, I believe the culprit to the “too soft” frosting is heat. Hot kitchens, hot tools, friction. This frosting needs to be cold, cold, cold when you make it. It doesn’t work in a hot kitchen. I’ve tried it and it just melts. The fat is what keeps this firm, the sugar helps to stabilize it, but when fat gets warm, it gets soft. So here’s a few additional tips for success:

*Put your bowl and beaters in the freezer for 30 minutes before you use them.

*When you whip the cream, start on a lower speed until it’s starts to get thick and then slowly increase the speed until you get stiff peaks. If you whip on high from the beginning, your beaters may cause enough friction to create heat. The heat will melt or soften the fat in the cream and the cheese.

Can I use powdered sugar instead of granulated?

Hi Erica, yes you can substitute powdered sugar but you'll have to adjust the amount to your taste and you'll need more powdered sugar to achieve the same amount of sweetness.

How long can I refrigerate the frosting till I use it?

Hi Ingrid, you'll see in the recipe and in the blog post that I recommend using it directly after making it. You'll have the best results with piping if you use it right away.

This is the absolute best chocolate frosting recipe I have found. I have been making it for years, and just now getting around to leaving a review. I have never had this not turn out perfectly. If you don't skip the step of mixing the cocoa powder with a little cream and make sure to use chilled cream (I even chill my mixing bowl and beater) then I daresay you will have the same results. I have my chocolate cupcakes requested over and over again and I attribute that to this recipe. Try it, you won't regret it!

Hi April! Thanks for such high praise for this frosting! I really appreciate you coming back to share how it's become a "go to" recipe for you. It really is a fave for so many who try it (along with the plain version, which I swear I've made hundreds of times :) I've never met anyone who has tried it that didn't love it!

Hi Jo, this is something that I'm working on. I hope to offer it soon. Thanks for the input!

How much sugar do you normally add to the chocolate version? Have you tried this recipe with only 1/2 cup of sugar? How did it turn out with less sugar?