Brown Sugar Cinnamon Whipped Cream Cream Cheese Frosting is a blend of cinnamon-spiced cream cheese frosting and whipped cream. It’s perfect for those who love a frosting that’s not too sweet. It pipes nicely but also makes smooth swirls for a more casual cake. Use it for all of your fall-flavored cakes or wherever you want the warmth of brown sugar and cinnamon.

How many of you belong to the “I like frosting that’s not too sweet” club?

I’m raising my hand high in the air. If I’ve said it once, I’ve said it 100 times; I’m just not a fan of super sugary sweet frostings.

So, please don’t be offended if you see me scraping said frosting off of a piece of cake or artfully decorated cupcake.

For me, anything that’s too sweet just masks the flavor of whatever lies beneath. 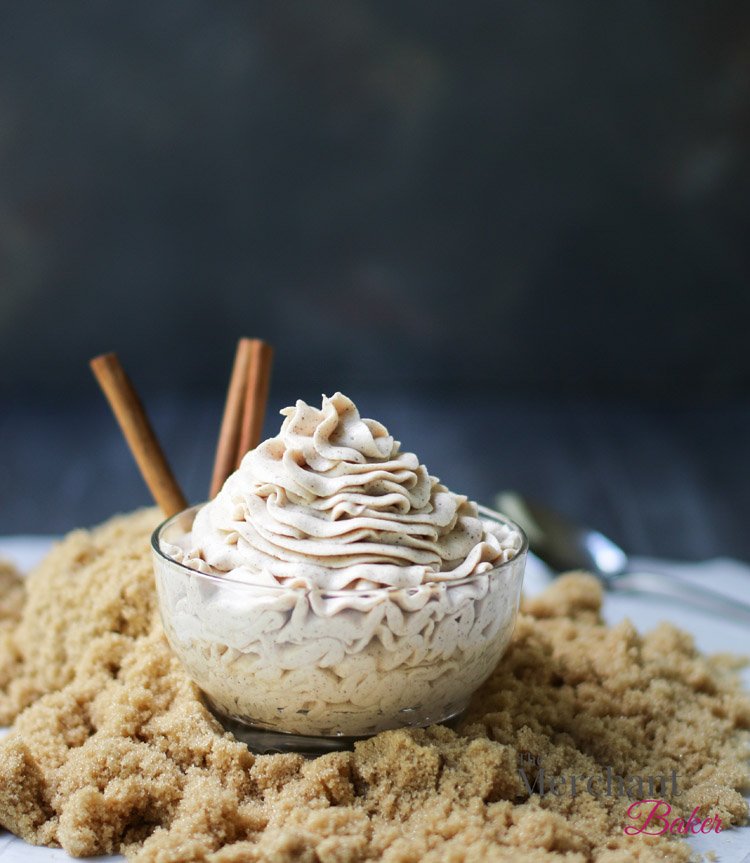 I realize that not everyone agrees with me. I think I’ve shared that I have a friend that loves that gritty sugar frosting that makes your teeth ache. That’s one of those, “Hey, that’s cool. You do you,” moments.

That doesn’t mean I’m not cringing on the inside because my teeth hurt just looking at someone eat a mound of that stuff. 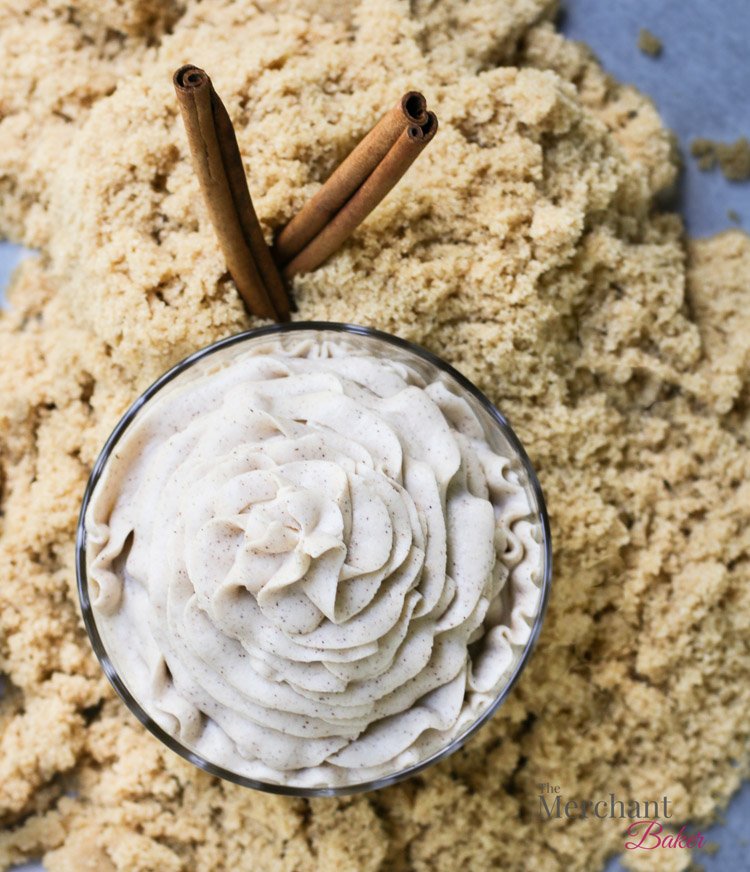 Like I said, I usually scrape most of that off my piece of cake/cupcake. I always leave a bit behind, because a little can go a long way, and hey, I still want some frosting on my cake. 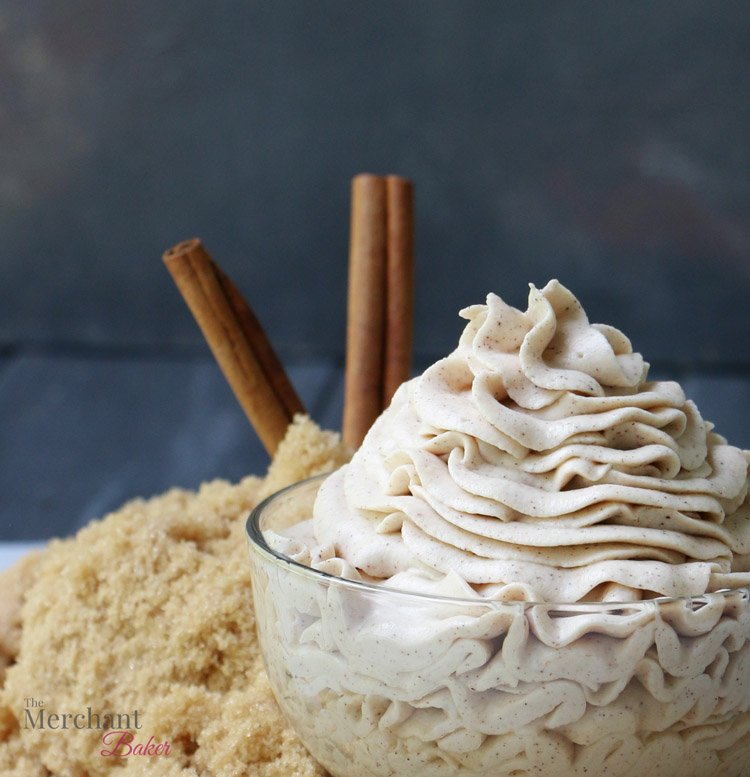 What’s the BEST not too sweet frosting?

Clearly, I’m biased, but today I’m sharing yet another version of my favorite, FAVORITE, not too sweet frosting, Whipped Cream Cream Cheese Frosting.

Yep, that’s been one of the most popular posts on my site since it was first posted. It has almost 500 comments on it and has been pinned almost 700,000 times!

That’s right. There are quite a few of us out there that prefer a less sweet frosting. And, while the OG version is my favorite, I also have a whipped vanilla frosting, whipped chocolate frosting and a whipped peppermint frosting.

Those delicious, not too sweet frostings are not cream cheese or whipped cream based. They are made with a cooked flour pudding-like mixture that is whipped into softened butter and produces a fluffy, not too sweet buttercream. 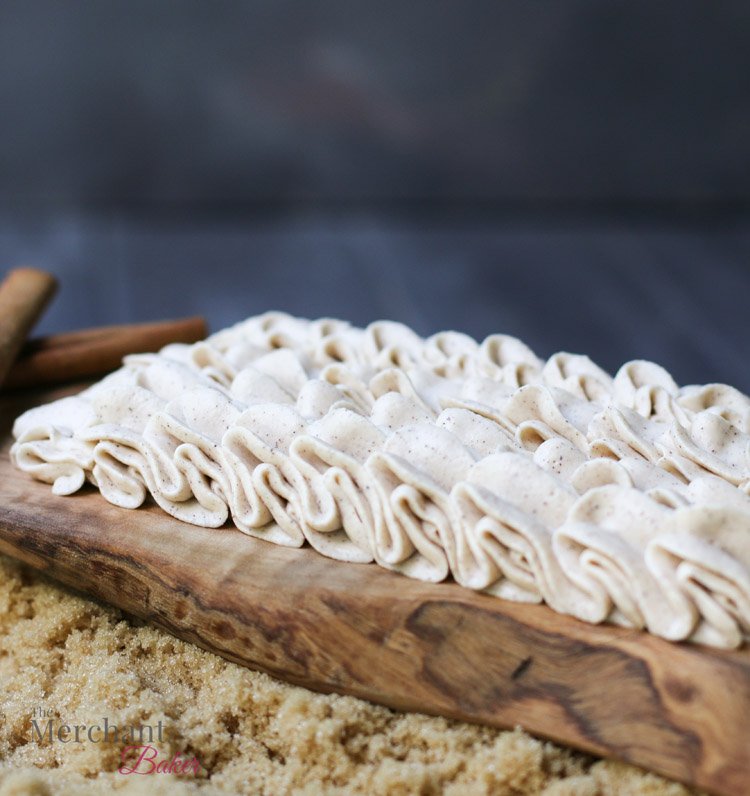 What I’m saying is that we’ve got choices, my not too sweet frosting fans.

Ok, so we’ve got the OG version of the whipped cream cream cheese frosting and its chocolate counterpart.

(By the way, if you’re worried about the cream cheese in this frosting, I’ve had people who don’t like cream cheese frosting admit to loving this one.)

I’ve used that original version on just about everything including pancakes and oatmeal! You’ll see how I use it in the video on that post. It really is good enough just to eat with a spoon!

I’ve also used it on this Italian Cream Cake, as well as this Strawberry Cake. It’s absolutely scrumptious on red velvet cake and carrot cake. And, I’ve pretty much used it on almost every birthday cake I’ve made because it’s everyone’s favorite frosting. 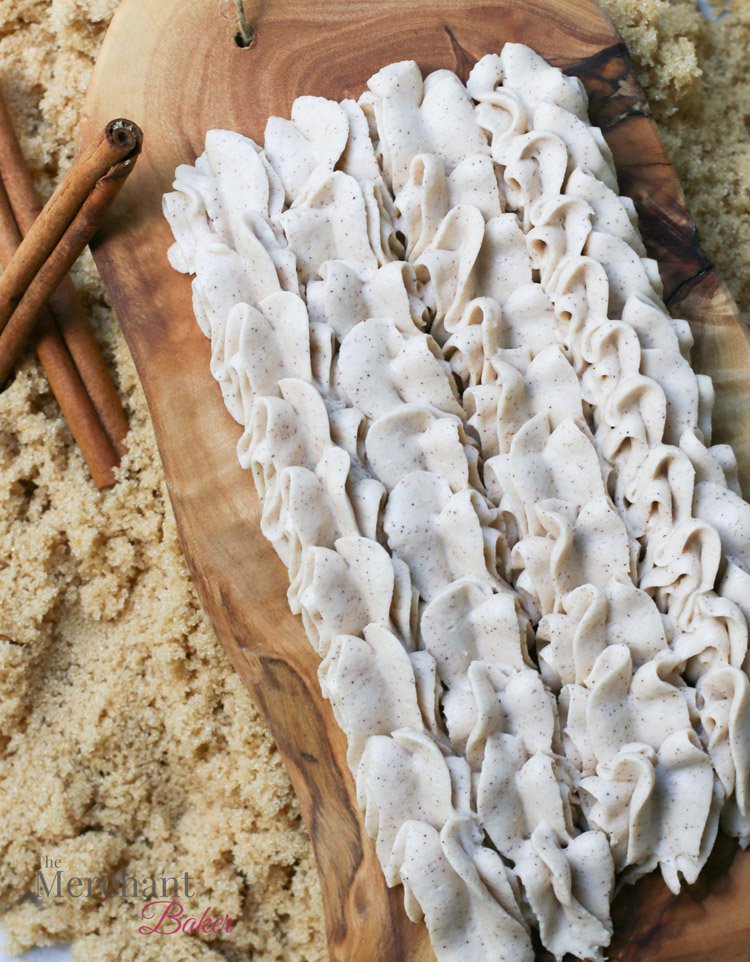 This post contains some affiliate links. We are a participant in the Amazon Services LLC Associates Program, an affiliate advertising program designed to provide a means for us to earn fees by linking to Amazon.com and affiliated sites.

Now that it’s fall, I figured it was high time for a version that was perfectly suited to fall flavors.

So, I started with the sugar. Instead of regular granulated sugar, I used brown sugar. The brown sugar gives it a nice warm, caramelly flavor.

Then, I added some butter to the cream cheese mixture. The butter adds a boost of flavor and it adds some extra body because of the higher fat content.

I also added some powdered sugar. This helps to balance out the body of the frosting with the additional moisture we’re getting from the molasses in the brown sugar.

Finally, it was time for spice. I added cinnamon. I happen to love using a good Vietnamese Cinnamon, but I’ve also made this with your typical grocery store variety. (aff. link) 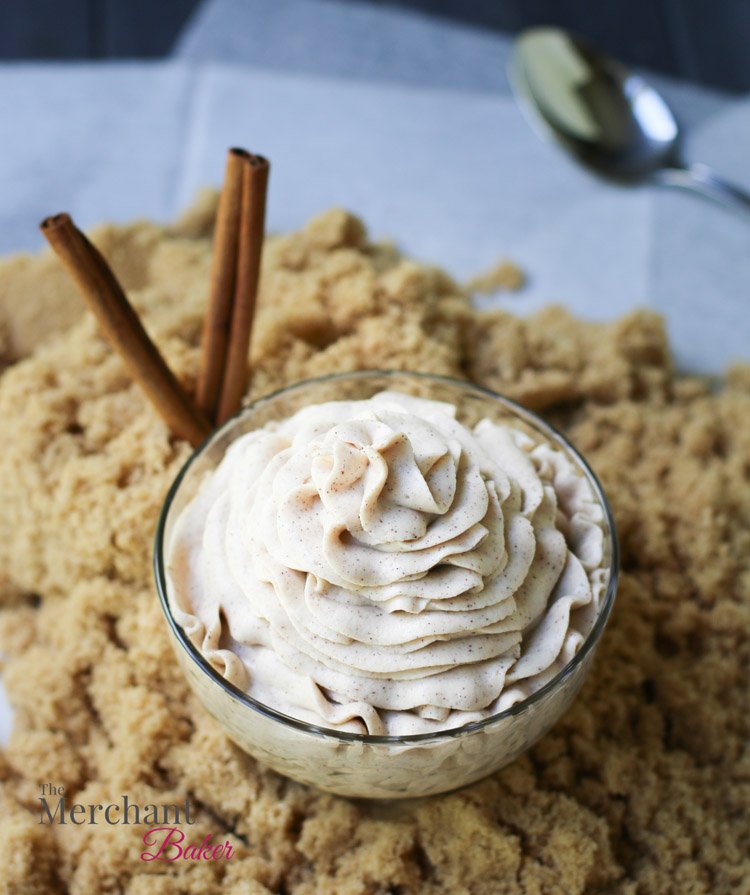 Remember that I said that there are almost 500 comments on the whipped cream cream cheese frosting post? Well, some of them are from readers who are huge fans and love the recipe. And some are from those who’ve struggled with success.

Even though this is the easiest frosting I make, some readers still have issues.

Ingredient temperature is one of the culprits of not achieving success. Here’s why:

This is essentially a whipped cream frosting. Whipped cream needs to be cold to stay whipped. Otherwise, because of its fat content, it will soften or melt when warm.

We need to keep the mixture cold to get a good piping consistency.

A common mistake is allowing the cream cheese to come to room temperature. I know that’s typical when making cheesecake, but it is neither necessary nor recommended in this recipe.

The cream cheese needs to be cold. You’re going to mix it with sugar which will help break it down. Don’t worry. You won’t get lumps and your cold whipped cream will thank you. 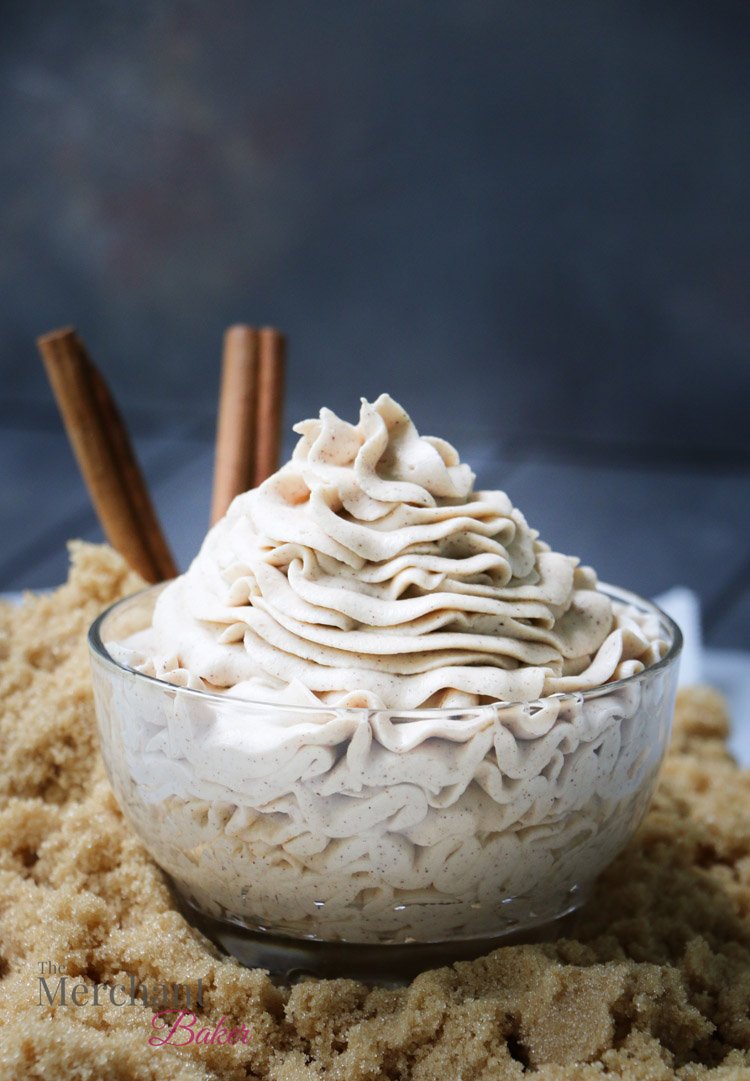 What temperature should the butter be? 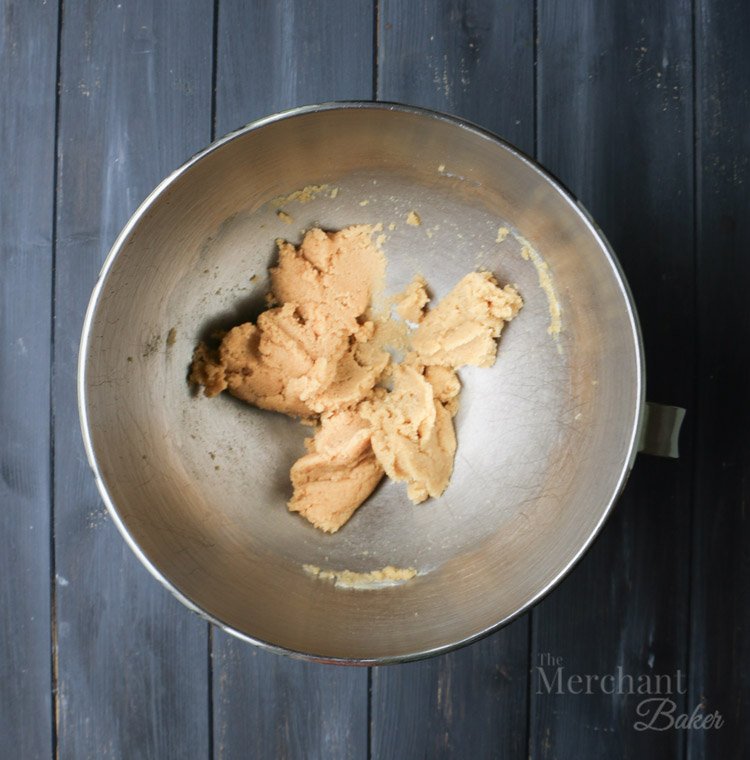 Butter and sugar just before cream cheese is added

What’s the “One Bowl Method?” 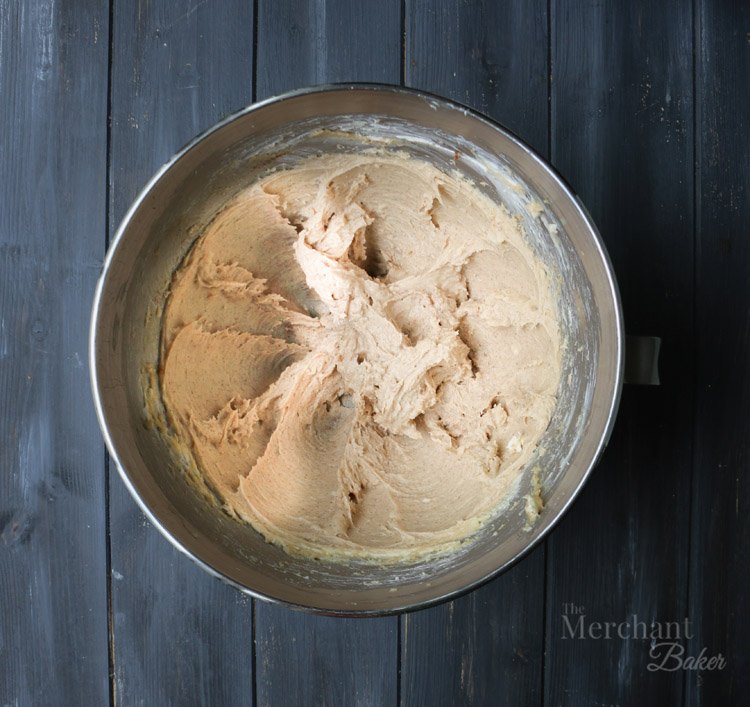 My frosting was runny. What’s the problem? 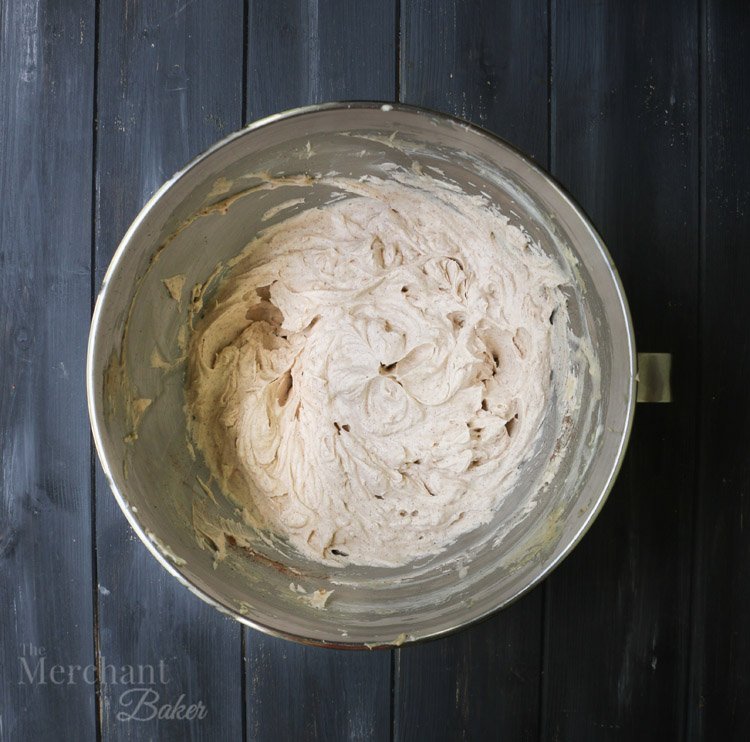 How do I keep the frosting cold if my kitchen is hot?

Seriously, even with all of this troubleshooting talk, please know that this should be an easy frosting to make. I can whip up the OG version in under 10 minutes.

Don’t give up if you’re having issues. Read the post for all the tips and I will help you troubleshoot in the comment section if you need it. 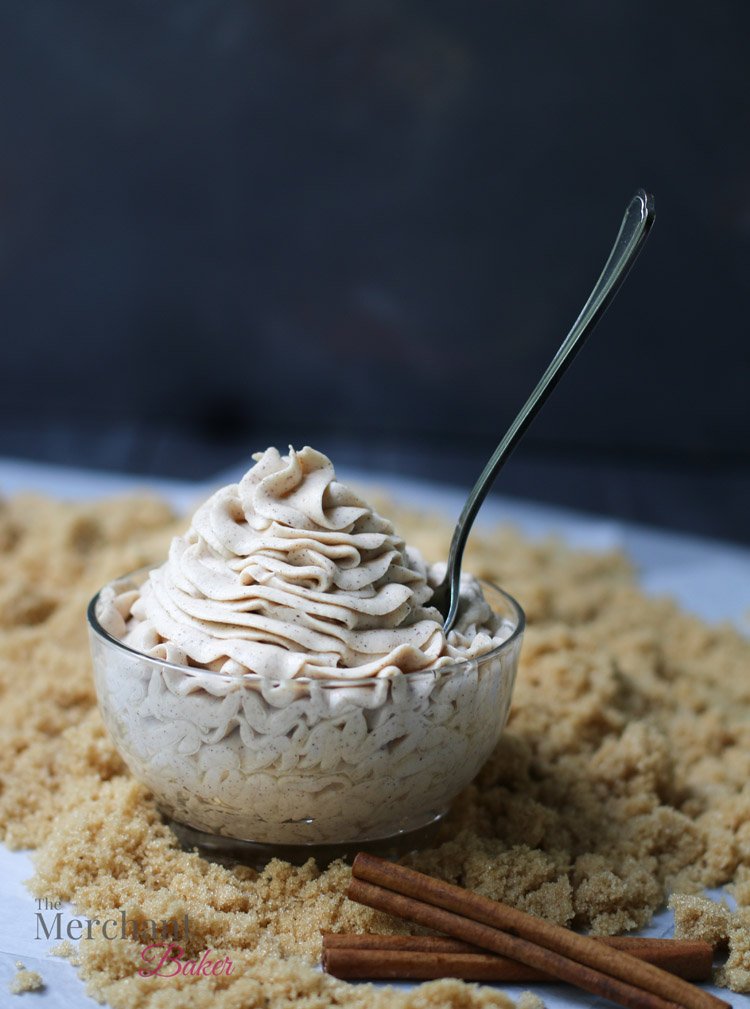 Can I frost my cake/cupcakes in advance?

How long can I leave my frosted cake at room temperature?

Can I dye this frosting? 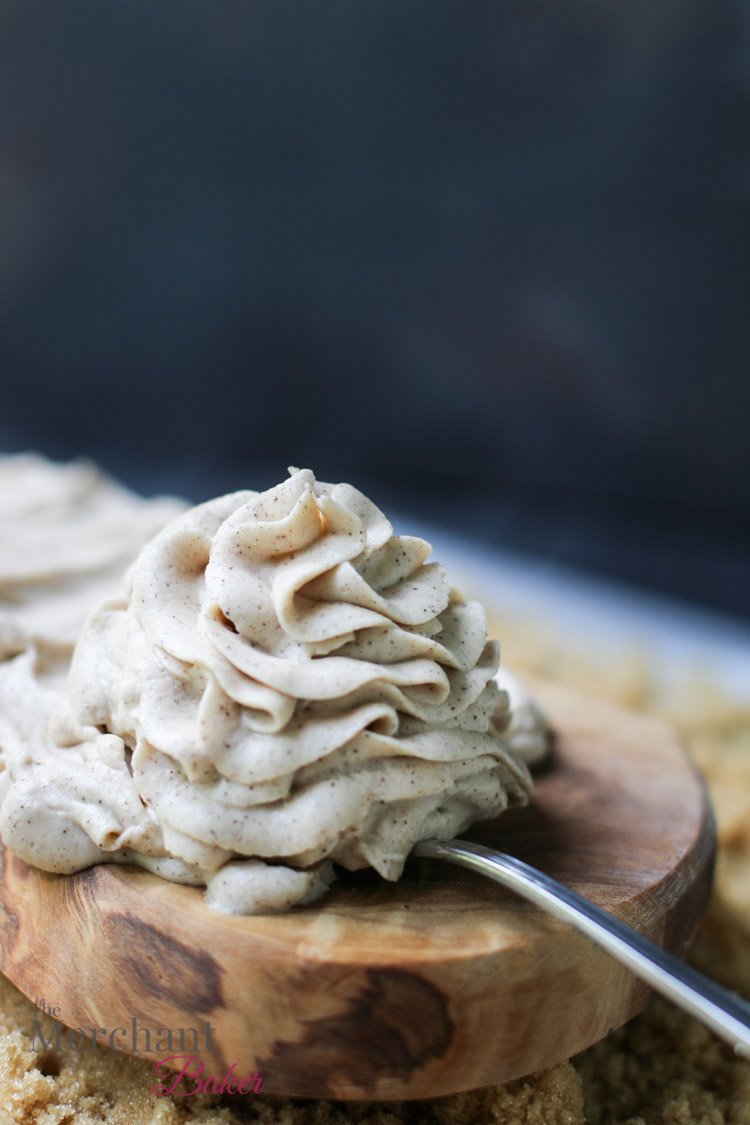 It’s creamy and wonderful just like the original, but all dressed up and ready for fall! I even created a new fall cake with this frosting in mind. Stay tuned for that post. It’s coming soon!

Oh, and lest I forget to mention it, this version is still good enough to eat with a spoon!

*The butter should not be room temp and mushy. It should still be somewhat firm and cool to the touch. It should be just soft enough to beat with your mixer. A stand mixer with the paddle attachment works well for this since the paddle will beat down the structure of the butter. If you're using a hand mixer, you might want to mash the cool butter a bit with a fork or cut it into smaller pieces before beating it.

*If you use unsalted butter, increase salt in recipe to 1/4 teaspoon or leave at 1/8 teaspoon if you're sensitive to salt.

*The directions are for the One Bowl Method. To do the "Two Bowl Method," mix the butter and cream cheese as directed in steps 1 and 2. Then, in a separate bowl, whip the heavy whipping cream to stiff peaks. Fold the whipped cream mixture into the cream cheese mixture, then briefly beat them with an electric mixture to combine.

*I used cinnamon for this recipe which is an easy and classic flavor for frosting all kinds of cakes. But, have fun and experiment with apple pie spice or pumpkin spice, maybe a pinch of cardamom?

*You must pipe this frosting immediately after making it. Once you pipe it, store the decorated cake in the refrigerator, it will firm up. But, if you try to make the frosting and pipe it later, it will not give you as crisp of an edge as when you first make it. However, I will happily softly pipe leftovers on pancakes or oatmeal the next day.

*Remember, this is a softer frosting than buttercream, and while you can still pipe it, it will have a different texture. It firms up quite a bit once piped and refrigerated, but does not have the stiff body of a true buttercream.

Hi, Kim! I'm thrilled to hear you enjoyed it! 😊

This recipe sounds delicious! I’m gonna make it this weekend, just wondering what type of cake it pairs best with?

Hi Joelle! It is delicious! I paired it with my Pumpkin Ale Cake. So, I think it would be great with any pumpkin cake, spice cake or maybe an applesauce cake. It would also be delicious with a butter pecan cake. It's really quite versatile and would pair nicely with so many cakes! I also have a plain vanilla version and a chocolate version that you should definitely try if you end up loving this type of frosting as much as we do!

This recipe is truly the most perfect recipe I have ever found. It has the most delicious cinnamon flavor, it's not too sweet, and it is ever-so fluffy and pipes beautifully. I passed up many recipes till I found yours and I knew I wanted to try yours because of the ingredients and all the pictures and specifics you give to help us along. I can't thank you enough for this recipe (it truly is a dream come true for me) and I will be trying many more of your recipes real soon. I know they're great too. Thank you again!

Well, Margie, I couldn't ask for a more glowing comment than that! Thank you so much for taking the time to come back to the site and give such positive feedback. I'm glad that you found the recipe and enjoyed it so much. I hope you find other recipes here that you love as much as this one!

Hi Sarah, the cream you use should say either heavy cream or heavy whipping cream on the carton. I think some brands will state regular whipping cream instead of heavy. Either of those will work for this recipe. However, I think you'll have greater success with a cream that is "heavy" because it has a higher fat content and will give you more structure for piping.

I love a frosting that's not too sweet, and this recipe is exactly I was looking for. Those points and notes you have mentioned in this article are very useful. Thank you so much for this lovely recipe.