Easy Cannoli Breakfast Cake. There’s no mixer required for this easy and delicious cake. It has all the cannoli flavors you love… it’s rich with ricotta, chocolate chips, pistachios and has just a hint of orange. You’ll love that there’s no waiting for anything to come to room temperature. All you need is a couple of bowls, a whisk and a spoon and you are off and running!

Some might say that all roads on this blog lead to cannoli. It wouldn’t be true in this case, though I do love the whole idea of cannoli. I mean, sweetened ricotta, chocolate chips, pistachios, cherries…even orange? Yes, yes, yes, yes and yes to all!

Of course, I have no traditional cannoli post, now do I? No perfect shells to fill here.

Nope. Just my repeated attempts to bring cannoli flavors to the table in the easiest ways possible. 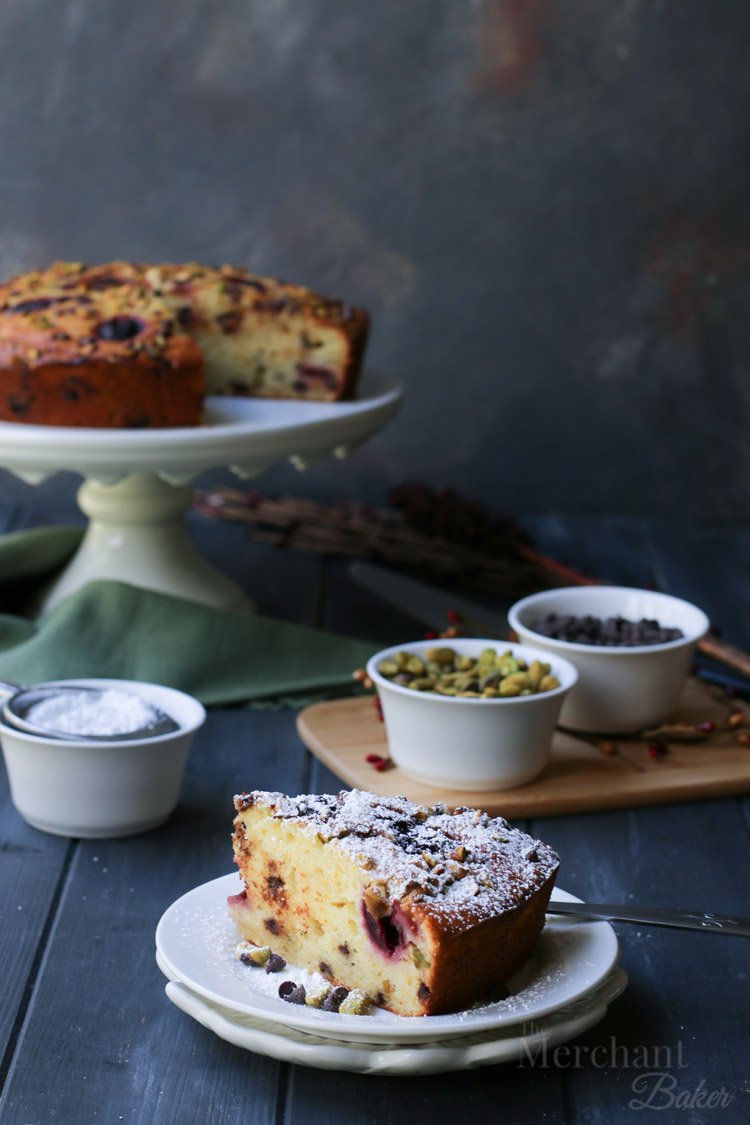 That means when you need a no bake option…I offer you No Bake Cannoli Ice Box Cupcakes. Those have sweet ricotta and chocolate chip filling, layered between delicious vanilla wafers. (Unfortunately,Trader Joe’s totally changed their vanilla wafer offering (the cookies I used in the post) to something I don’t like at all, but you can still use the traditional ‘nilla wafers we all know.) 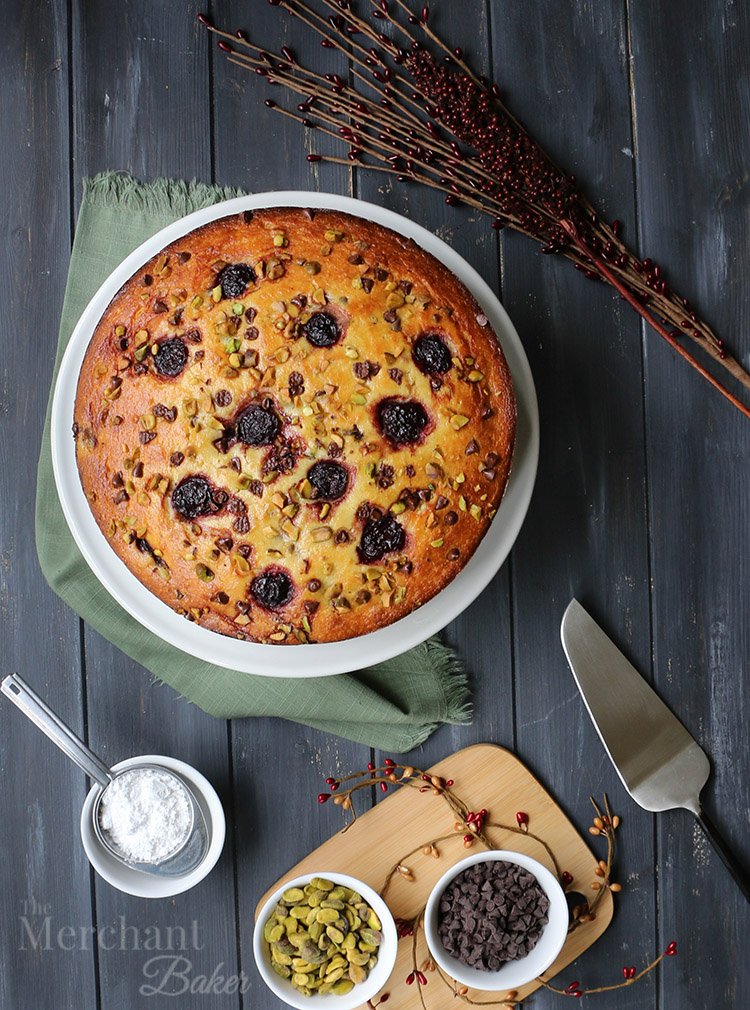 Or, it means if you are absolutely wanting a scone, you might go with Chocolate Chip Ricotta Cannoli Scones.

Ask me how much I love those scones! They turned out soooooo good! Huge hit over here. I never thought I’d be so excited about a cherry on top of my scone. The flavor was just perfect! The ricotta cheese was a perfect replacement for heavy cream. And, I have found, that I am a big fan of chocolate chips in a scone. (I know. Shocking revelation ;)

Then, last Christmas, I made Chocolate Chip Cannoli Pie. Holy cannoli! That was a great pie! For that one, I added a bit of cinnamon to the pie crust to mimic the taste of a cannoli shell.

I took it to a holiday gathering and set it amongst the vast dessert assortment. Later that evening, someone found me and asked, “What kind of pie did you make? Everyone who’s eating it loves it, but wants to know what it is!”

When I told them it was a cannoli pie, they all said, ah…yes…that makes sense! I can taste all the flavors! 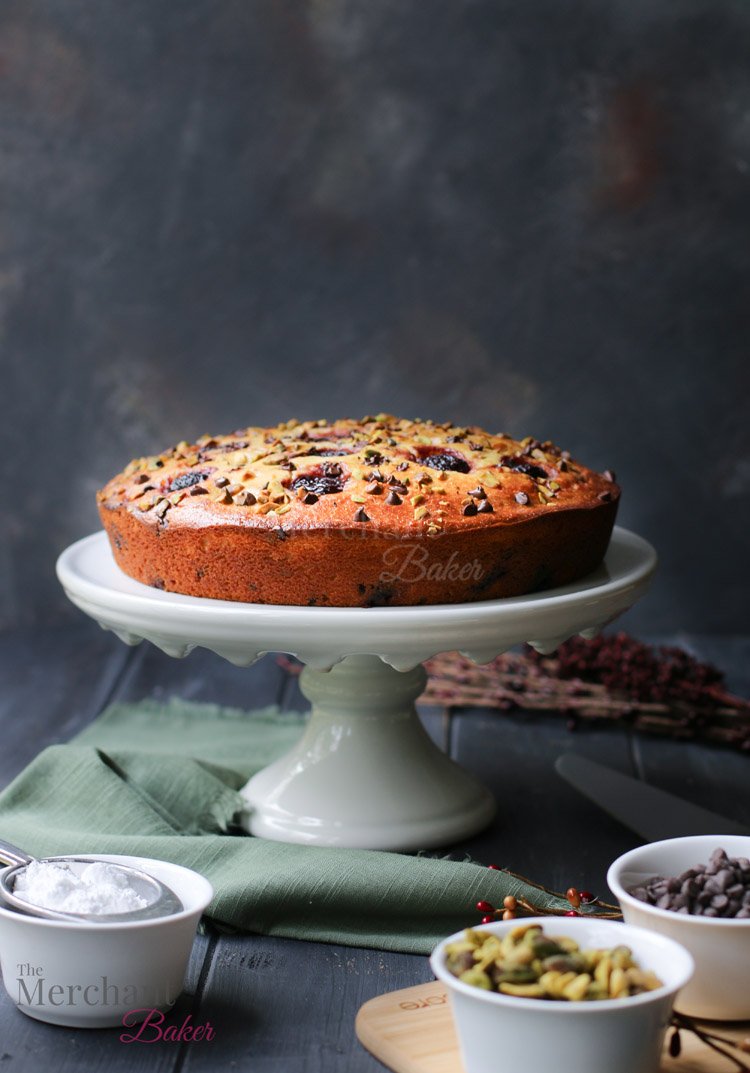 So, my friends, here we are again, tripping the light fantastic through cannoli land, but this time with a cake, a breakfast cake, to be exact.

This recipe is based on this Raspberry Ricotta Cake from Epicurious. I had printed it out to make one day and ran out of time, so my daughter stepped in to help out. As soon as I had a bite of that cake, I wrote a note to try it as a cannoli cake.

So for me, that meant chocolate chips, pistachio, a little cherry and a little orange. I thought about adding cinnamon, but thought it might be one flavor too many, and I really wanted to add the orange zest for something different.

I’m calling it a breakfast cake because it’s a pretty simple; it’s not the whole cannoli layer cake deal. (Btw, I meant to post that kind of cake awhile back, but it was my birthday cake :) And, while it was deee-licious and all, I just never quite got around to re-creating it for you. Someday, I will, though. I’d like to make it to round out this whole cannoli category.)

This won’t be the first breakfast cake I’ve posted that contained ricotta. Check out my Lemon Ricotta Crumb Cake, if you love the whole lemon ricotta thing.

Or, my Lemon Ricotta Poppy Seed Scones…if you love the whole lemon poppy seed thing. And, of course, try them if you’re a fan of my scones… ;) 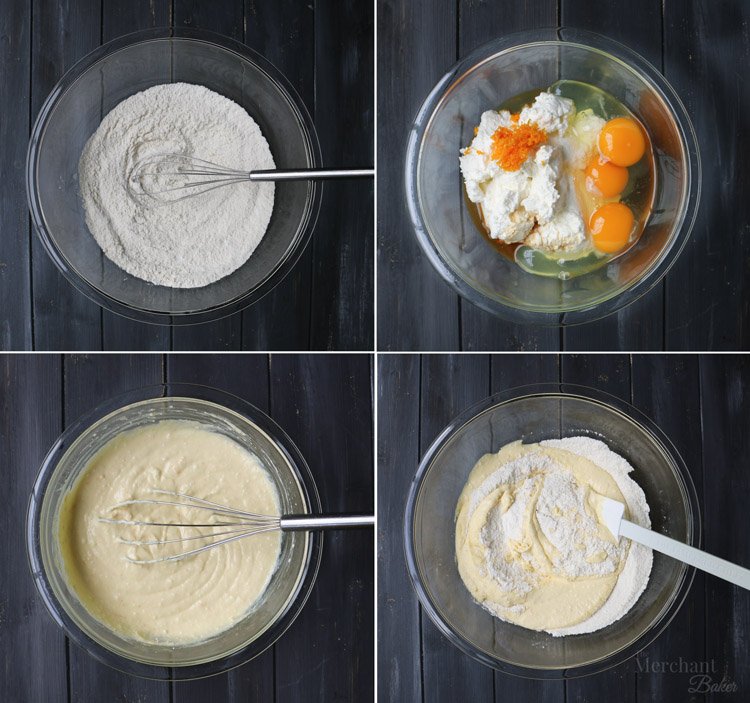 Okay. Back to the cake. It couldn’t be easier. Really. You don’t even need a mixer. You don’t have to wait for eggs or butter to come to room temperature. I love that. It’s like cake on demand :)

This is your typical whisk the dry ingredients, whisk the wet ingredients, fold them together along with your additions. That’s it. It’s pretty much as easy as making pancakes…

The dry ingredients are typical…flour, sugar, baking powder and salt. That’s one bowl.

In the other bowl, whisk up your eggs, ricotta, vanilla and orange zest. Fold the dry into the wet, just until barely combined. 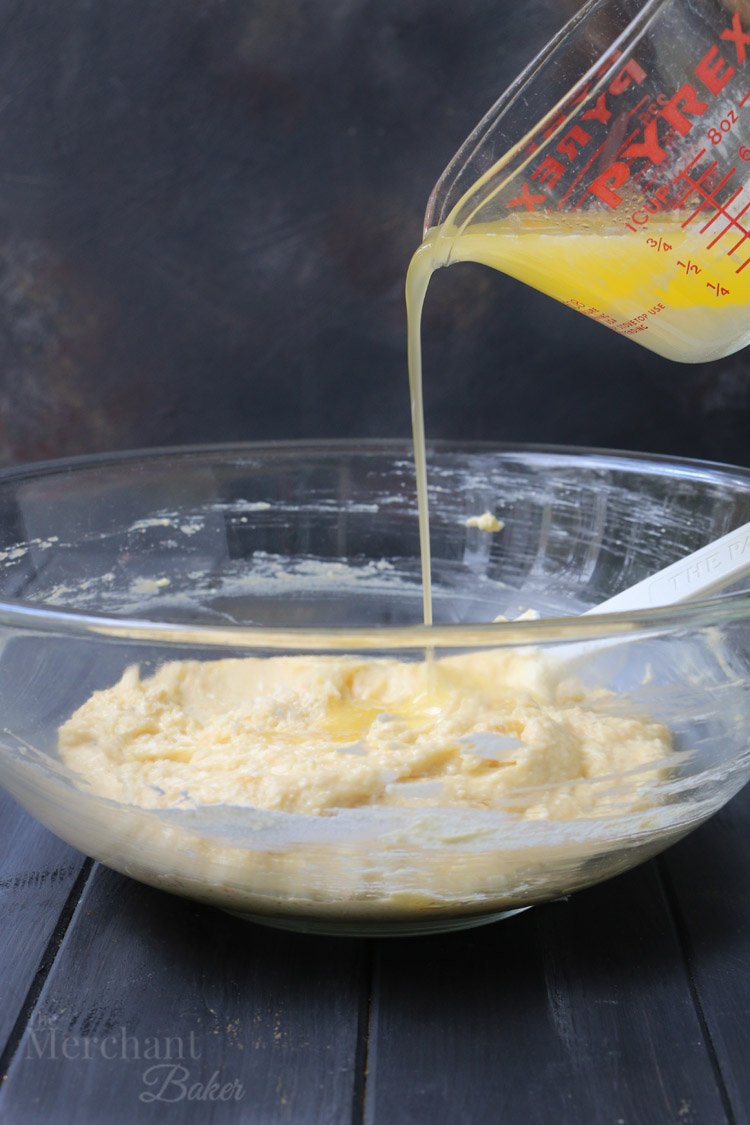 After that’s all mixed up, THEN you whisk in the melted butter. Yep, that step comes AFTER all the other dry and wet ingredients are mixed.

Now, we’re ready for mixins….Really, anything goes. You can add and subtract at will here.

In addition to the orange zest, I added pistachios, cherries and mini chocolate chips.

I did struggle a bit with how much of each I wanted to add and whether or not I wanted them in the cake, on the cake or both. And, did I want it chock full or just hints of this and that? 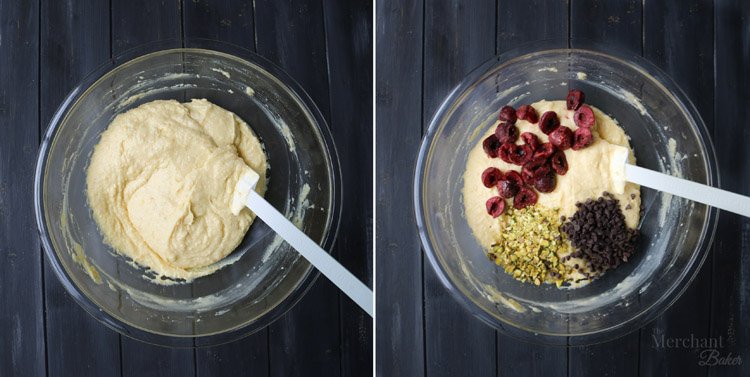 As you can see, I decided to put them in the batter and on the top. I think that was a good idea. I liked the additional texture in the cake as well as on the top. 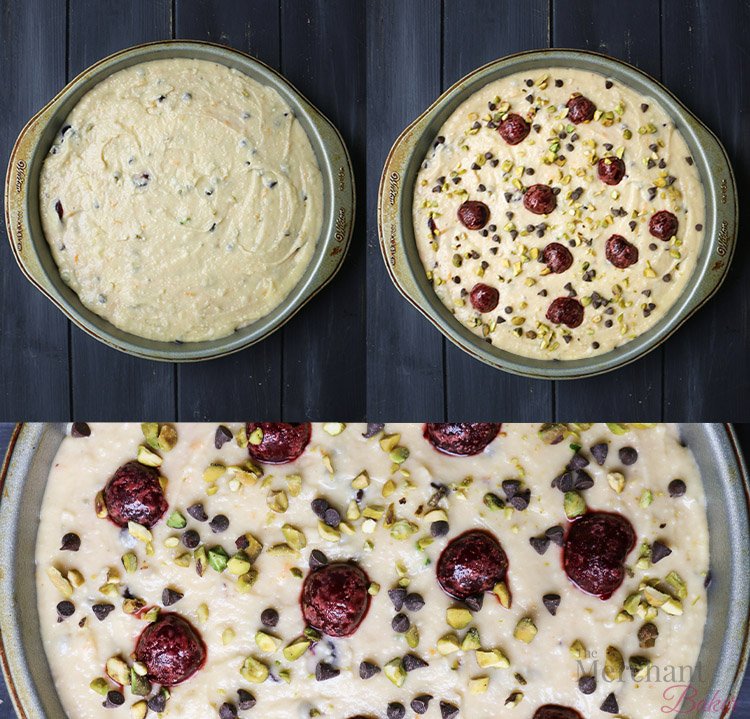 Can I adjust the flavors and amounts of each mix in?

Now, as far as how much of each I added, this was my rationale. This will help you decide if you’d like to follow my lead or take off on your own path: 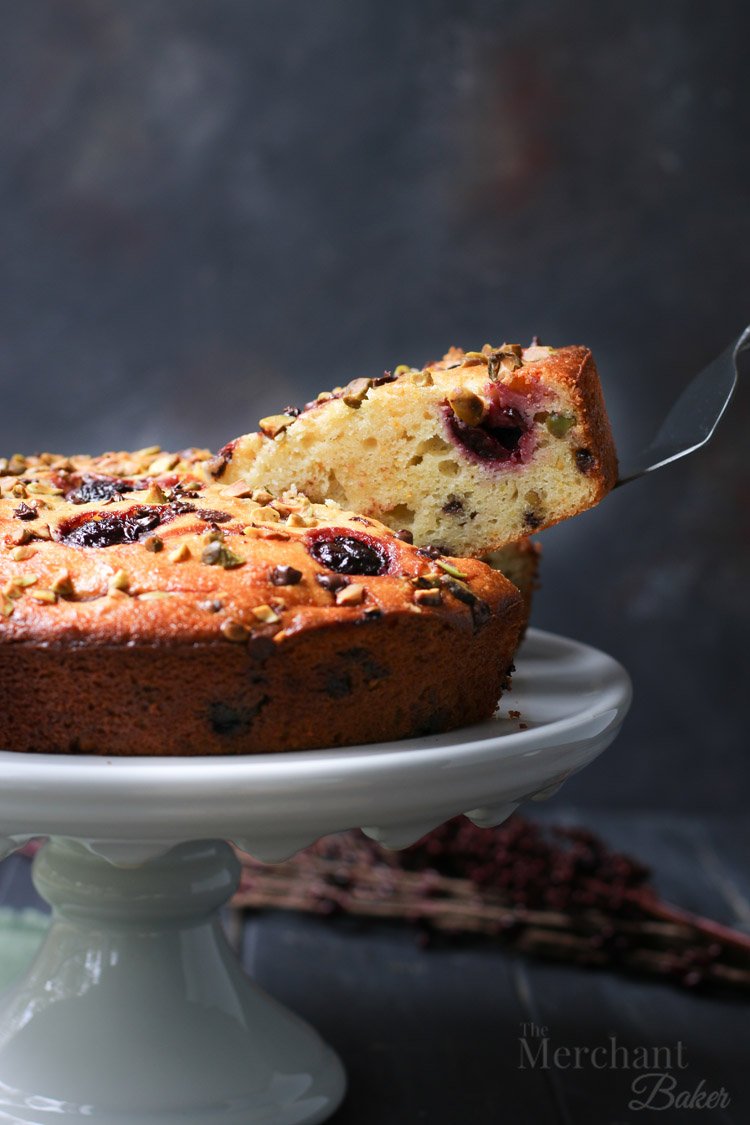 I don’t think I added any orange when I made the cannoli pie, and I didn’t add pistachios when I made the no bake cannoli cupcakes. I decided to throw some orange in this time for freshness. It was a good idea and it made for something slightly different in flavor than my other cannoli creations.

You could also throw in a pinch of cinnamon, but I didn’t. I sort of subbed in the orange and skipped the cinnamon. Maybe I’ll grate a little nutmeg in next time. That could be delish.

With all this talk of options and amounts, I don’t want to confuse you with all the different choices; what I’m trying to say is that, “This cake is infinitely flexible for any flavor you want to add!” 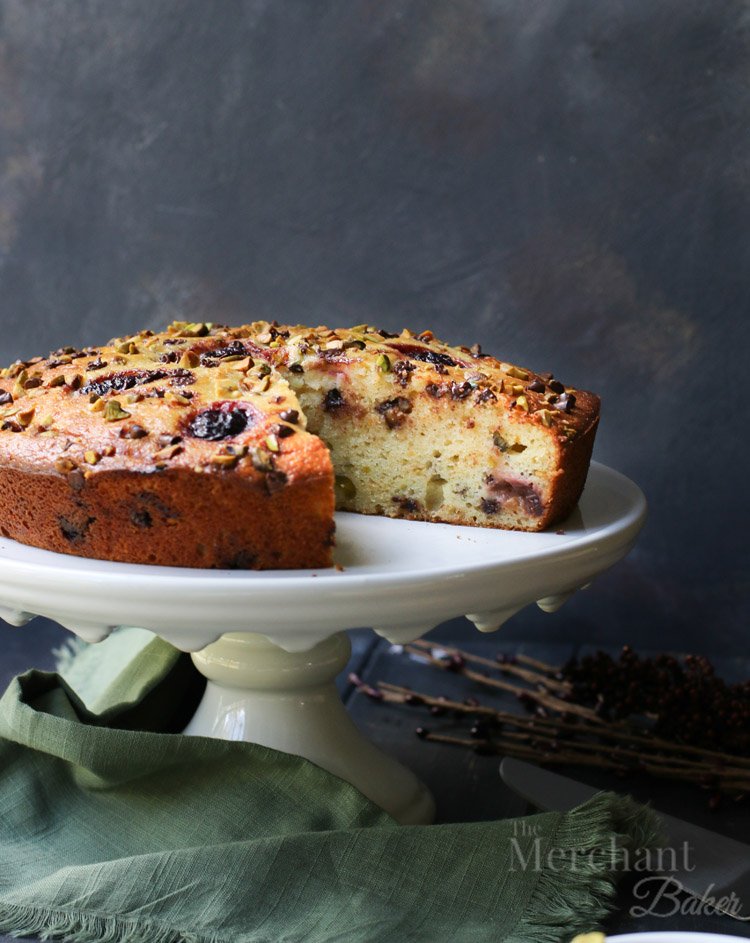 So…. you could just as easily add a good amount of lemon zest and some poppy seeds instead of the pistachios, chocolate chips, orange zest, etc. and end up with a wonderful lemon cake.

I think I’m going to try it as a cherry almond cake…maybe with chocolate chips, maybe without. Then, I’ll go a little crazier with the cherries and be quite happy about it.

Options, my friends, options. For the cannoli cake, pick the cannoli flavors you love and add them. It’s all gonna be good. 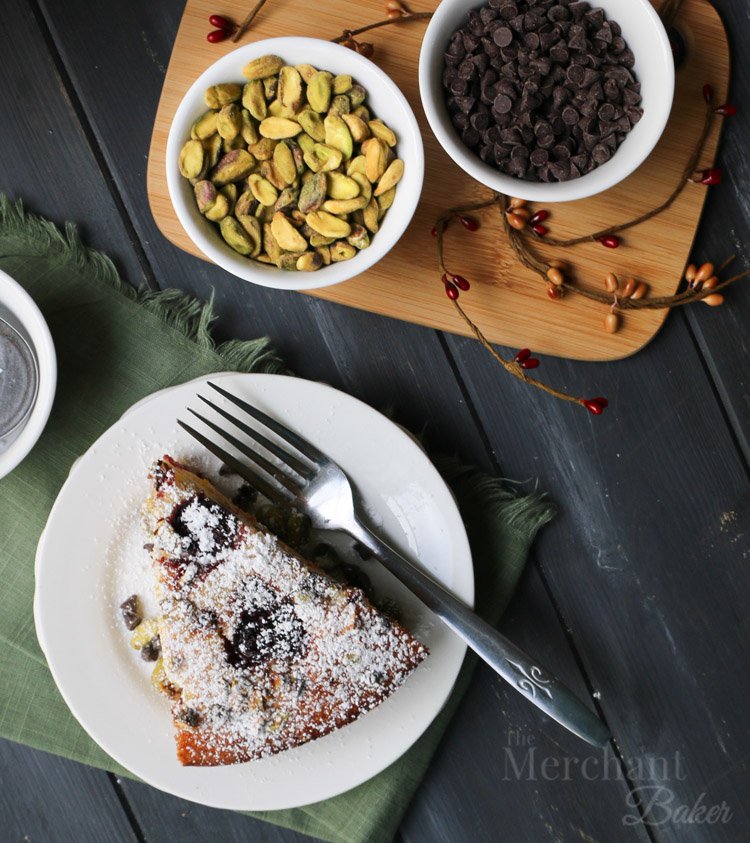 Once it’s baked, you can serve it as is. After all, it has all of those toppings baked prettily right into the top. It’s basically dressed and ready to go. 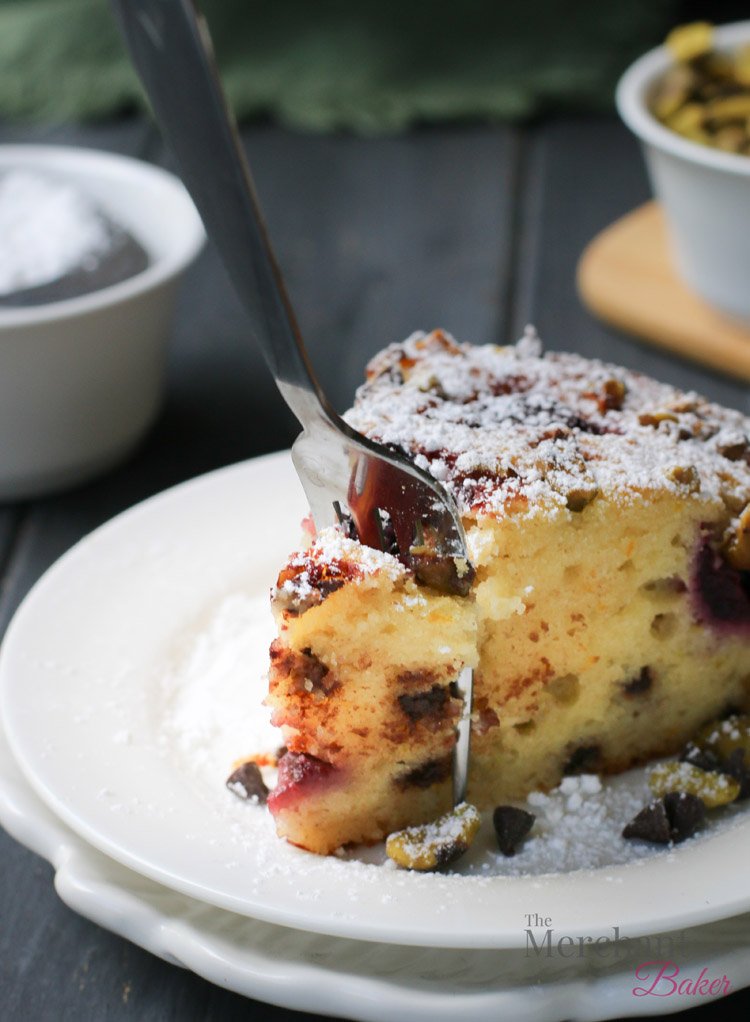 Not that we don’t do fresh whipped cream around here…but if that carton of heavy cream isn’t open, my family knows we’re not breaking into it to use a small amount unless I’ve got plans to use the rest for scones or something. Waste not, want not.

So, if I was planning to serve it with whipped cream that I was whipping myself, I think that might be a nice place to add that hit of cinnamon we talked about earlier…Or, if you had some cherry liqueur hanging around, that could be a fun way to add some flavor to your whipped cream….

In any case, the cake is moist and rich from the ricotta. The pistachios add a soft nut texture, while the cherries add a sweet, juicy texture. Then you hit the mini chocolate chips for a little chocolate fix. And if you happen to get a cherry in that bite with the chocolate, then you have the whole chocolate cherry thing going on…The orange flavor sits in the background but is present throughout. 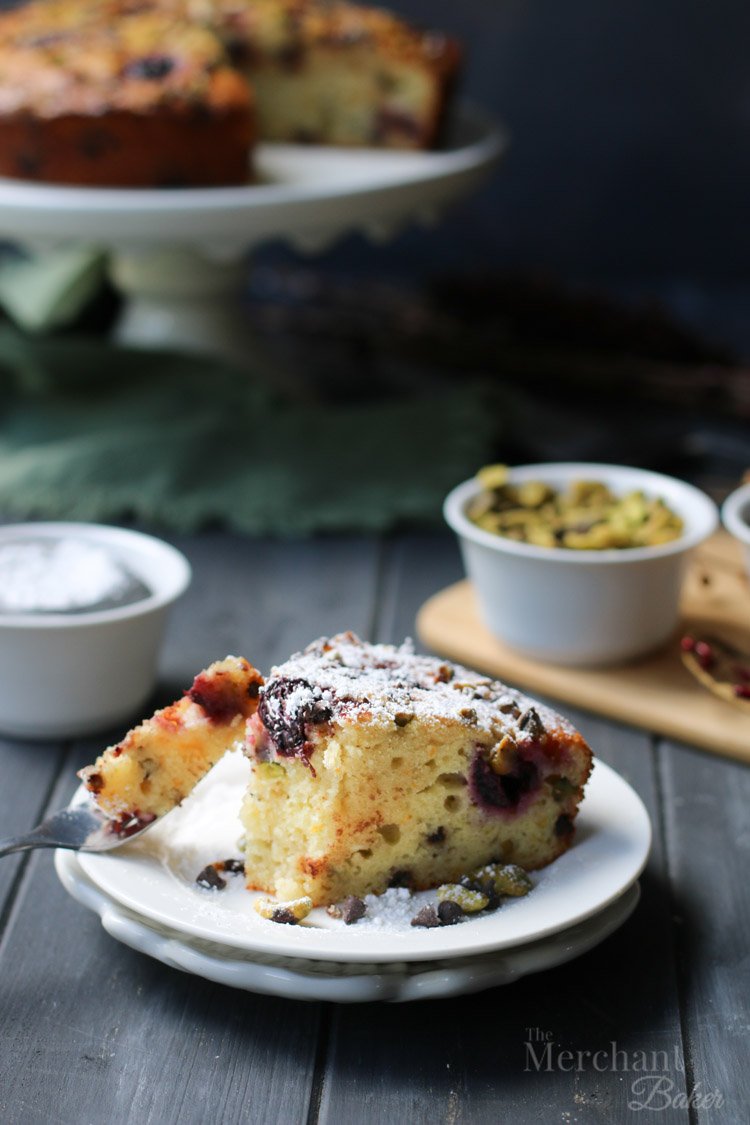 Either way, all roads lead to yum! :)

*If you use table salt instead of kosher salt, use a pinch more table salt.

*If you use salted butter, reduce salt to 1/2 teaspoon instead of 3/4 teaspoon.

*The amounts of cherries, chocolate and nuts are just enough to lightly fill and top the cake. You can increase the amounts as desired.

*I used full fat ricotta. When measuring the ricotta, stir it up to break it up and aerate it a bit before placing into the measuring cup.

This looks great! A perfect holiday recipe. I am really excited to make this. Thanks for posting.

Hey Cyndi! When I first made it, I made the original raspberry version and thought of your raspberry almond cake because it looked similar even though taste and texture are different. I love how easy it comes together. It's a fun one to experiment with different flavors and add ins. I think you'll like it!