These Chocolate Chip Ricotta Cannoli Scones started out as a cake. 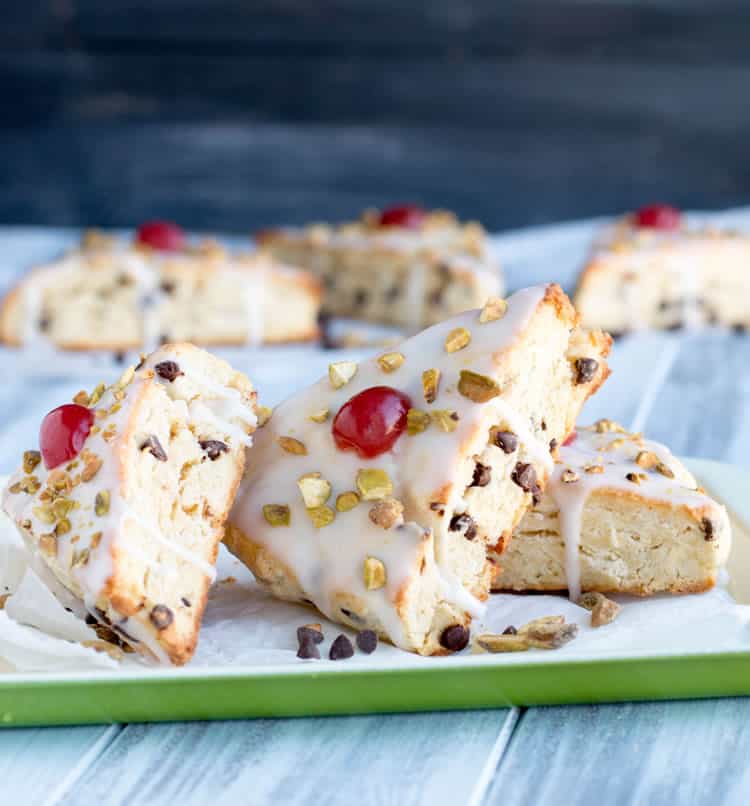 I don’t mean I tried to make a cake and ended up with a scone, exactly. What I mean is that I had planned to post a cake today. But, as it happened, the base of that recipe, the cake itself… well, it didn’t quite work out….

I don’t know why it didn’t work out. I had good ingredients at the correct temperature. I made sure that I didn’t miss any ingredients and did all the proper measuring, creaming etc.

But I ended up with some mighty flat cakes. It’s a mystery to me why they turned out that way.

I’ve made that particular cake recipe multiple times. Heck, I even requested the cake for my birthday one year and my husband/kids made it…successfully. 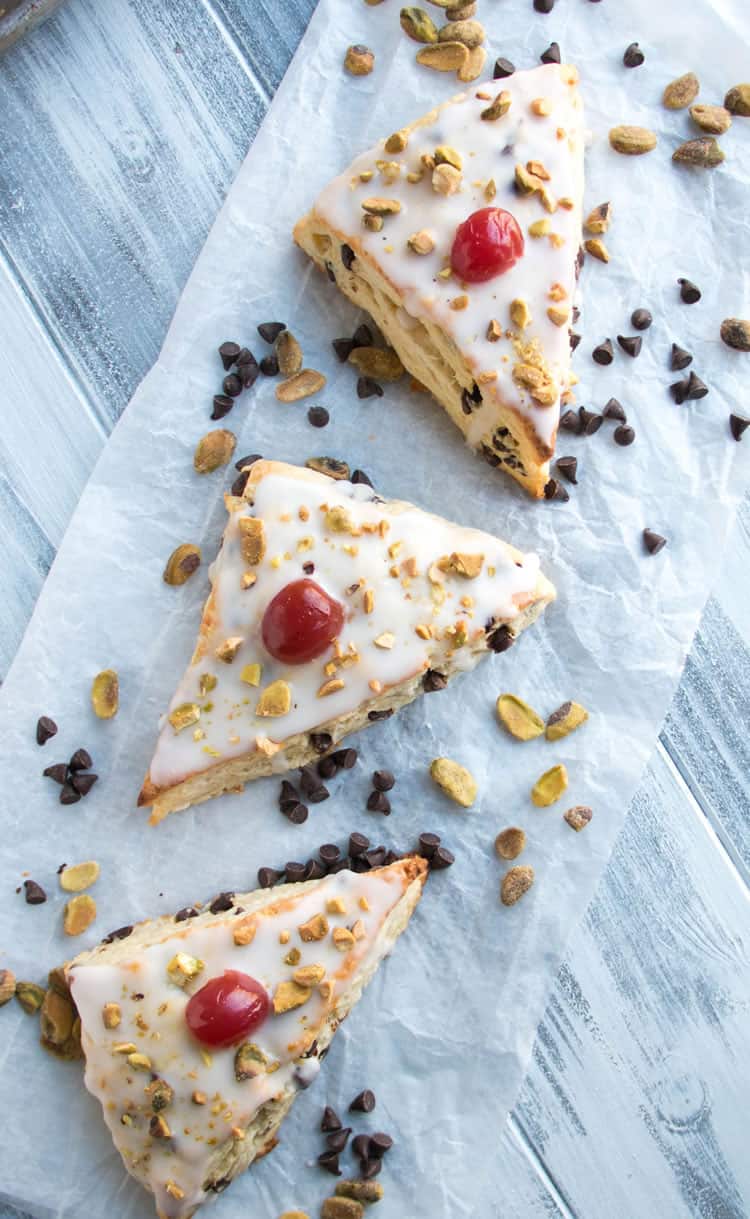 For whatever reason, the cakes didn’t rise as they should have. Which meant I couldn’t torte them and fill them with delicious filling and frost them with light and airy frosting….Ugh!

I even had a friend stop by while I was lamenting my thin layer cakes. She said she’d never seen me bake a cake that looked like “that.” Great.

Normally, I would have just tried again. But, I really wasn’t in the mood to trouble shoot it, especially when I thought I was spot on with the whole darn process. 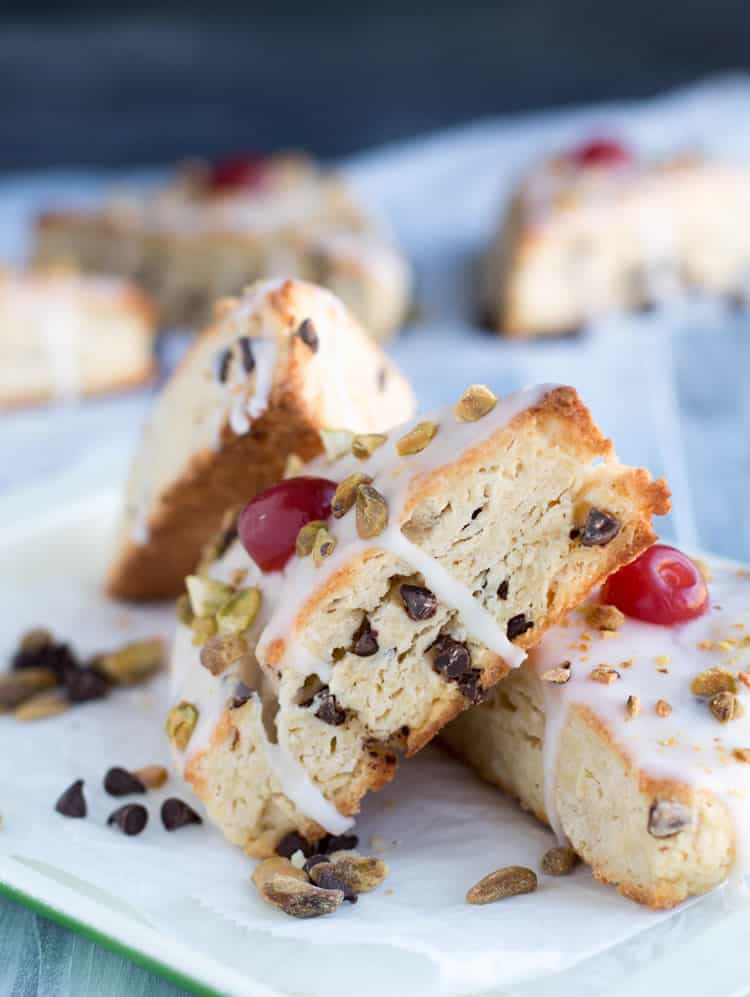 And, I didn’t want to have that much extra cake hanging around. Not that anyone would have complained, but really, after some of my recipe testing odysseys, I just, as I mentioned before, wasn’t in the mood.

However, I still had my cannoli filling ingredients sitting there, staring at me, begging me to use them.

I thought, hmm, it’s been awhile since I’ve posted a scone. You know how I LOVE my scones. Oh, wait….you don’t? ;)

Don’t forget to check out Dark Chocolate Fudge Scones (swoon!) Or, for something different, perhaps my Blackberry Fontina Basil Scones? That’s a scone that eats like a meal!

So a cannoli scone? A Chocolate Chip Ricotta Cannoli Scone? That sounded good to me!

The name is a little long, but I wanted to make sure it was clear that this scone had all the makings of actual cannoli, minus the shell, of course. Now that you know, you can just call them Cannoli Scones :) 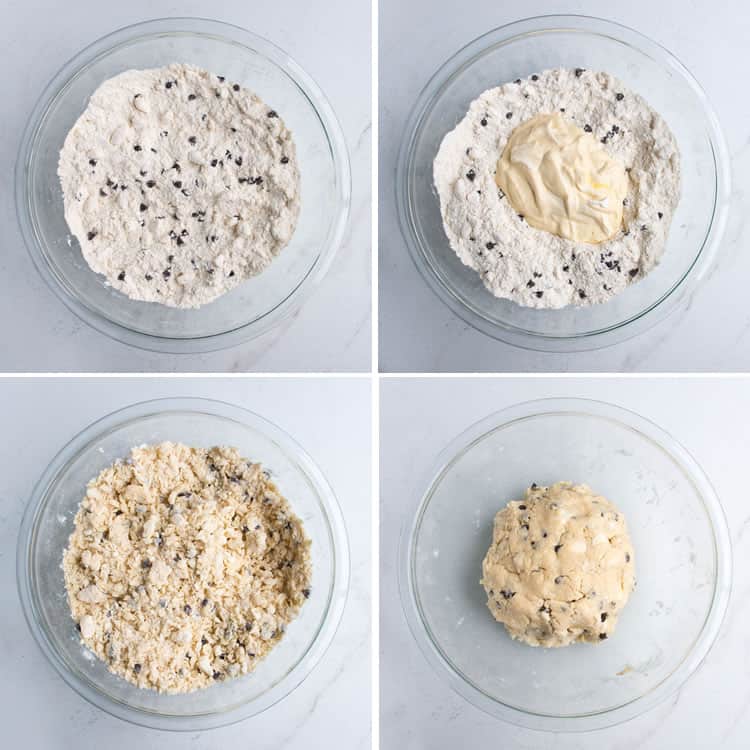 Even though I’ve taken photos of the process a thousand times before this post, I took the photos yet again. Just so that you would have an easy reference.

These scones come together much like my other scones. Whisk the dry ingredients, cut in the butter. I’ve given you a photo so you can see what that dry mixture looks like once the butter has been cut into the flour.

You’ll have various sized pieces of butter. Don’t cut it in until you can’t see it. We want bits and bobs of butter throughout the mixture.

Then I threw in the chocolate chips. I was a little bit iffy on how much to use. I measured out 1/2 cup, but only used about 1/4 cup. It looked like plenty to me.

I might push it to 1/3 of a cup the next time and I’ll make a note for those of you who want to add more. But, I have to say, a lighter hand is probably better here. (Though I wouldn’t turn my nose up at one that was chock full either :)

Alright, so the chips are in the bowl. You’re going to measure out your ricotta cheese and beat an egg and vanilla into it. That goes into the bowl. 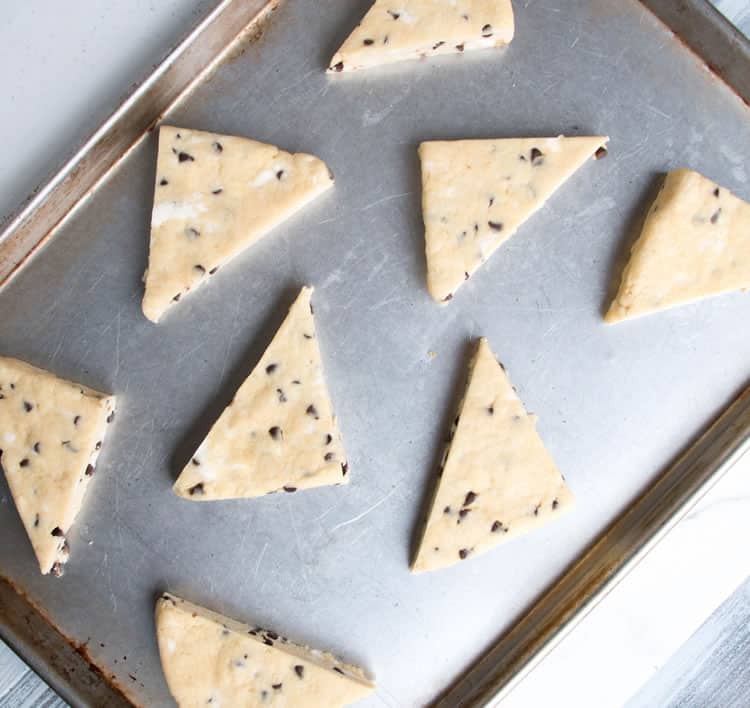 I pour it all into the center of the flour mixture and then use a large mixing spoon to bring the edges up and over the cheese mixture turning the bowl as I go until it’s all mixed up. It’s sort of like gently tossing the mixture and folding it in onto itself.

I don’t use a traditional stirring method because I don’t want all of my little butter pieces to get mixed into oblivion. I want to see evidence of their existence all the way up to the point where they go into the oven.

Okay. So you have this shaggy looking dough. That shaggy looking bowl of dough is exactly what it should look like once you’re done gently incorporating the ricotta cheese mixture.

I took a picture of this stage because some of you are going to think that you need more liquid. Some of you may even comment that the recipe is wrong. 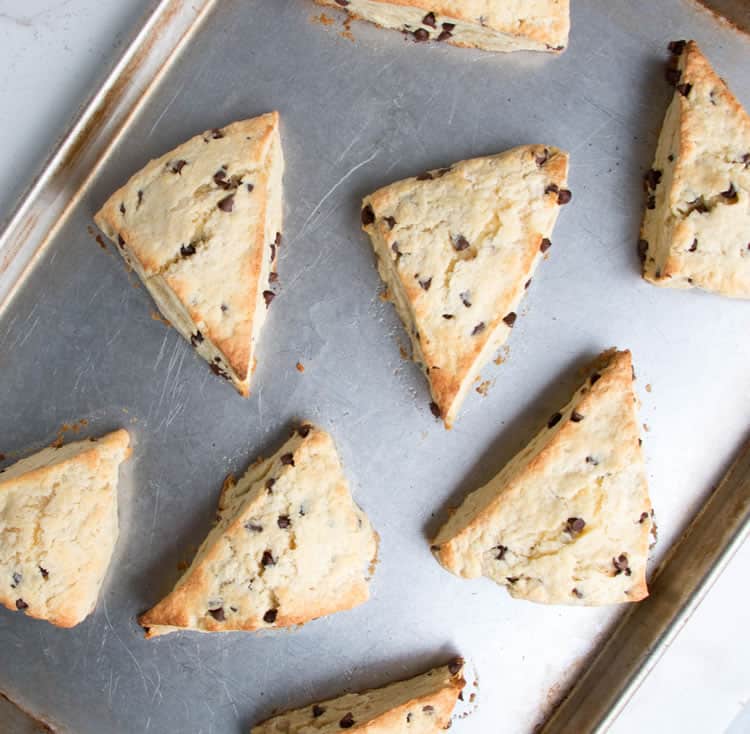 But there’s two things I’d like to say on that topic. First, look at the picture of the mixture once all of that ricotta and egg is mixed in. It totally comes together. You have to get your hands in there to bring it all together, but it comes together quickly.

Second, if you haven’t read all of my other scone posts, you might not know that I like what is called, “a short scone.” Short scones have a higher ratio of fat to flour. They’re a bit denser, heartier and richer. That’s why shortbread is called shortbread. There’s lots of butter in it.

If I’m going for something really fluffy, (and with more liquid) then as far as I’m concerned, I’m travelling into biscuit land, yet another favorite category. 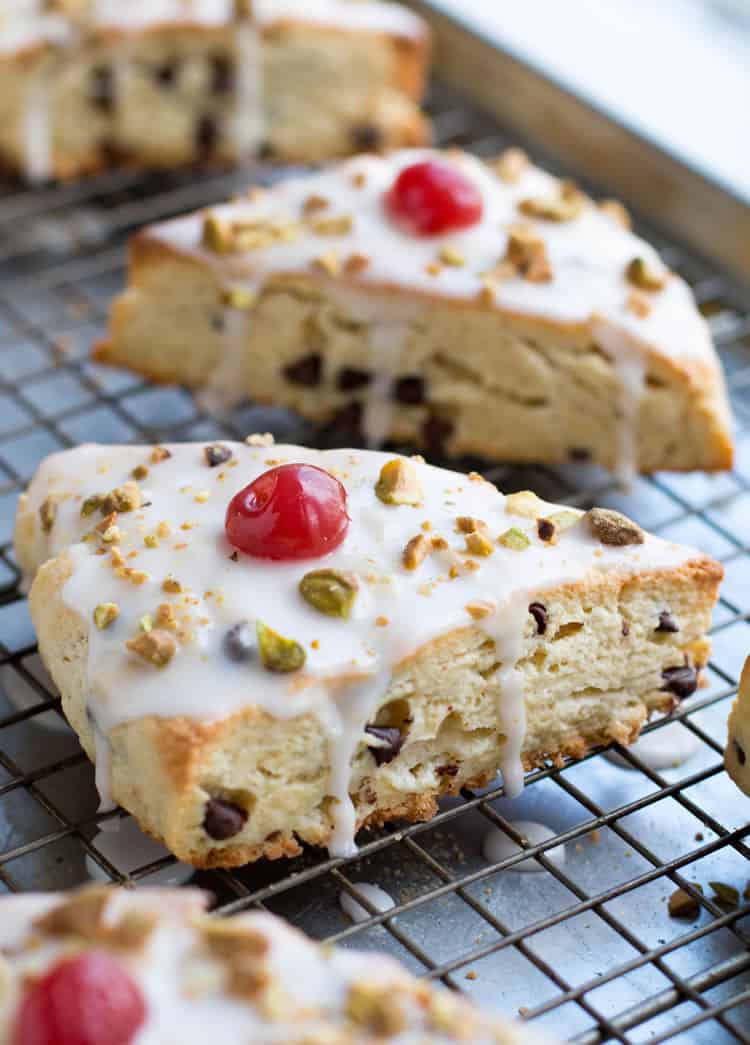 Some of my scones are fluffier or have a slightly different texture than others, but they all have a richness that I love. So that’s why my scone recipes don’t call for lots of liquid.

Once you’ve brought that ball of dough together, pat it into a square that’s about 3/4-1″ thick. The square will be about 7″, but don’t worry about measuring it. Just get the thickness right.

Then it goes into the freezer for 30 minutes or so. Just until the dough is nice and firm. You’ll get beautiful clean cuts that way and your scones will bake up better if you start with nice chilly dough.

You can cut your scones in a variety of ways. Check out some of my other posts for that. I chose a square. Sometimes I divide the dough and shape into rounds and then cut pie shaped slices. 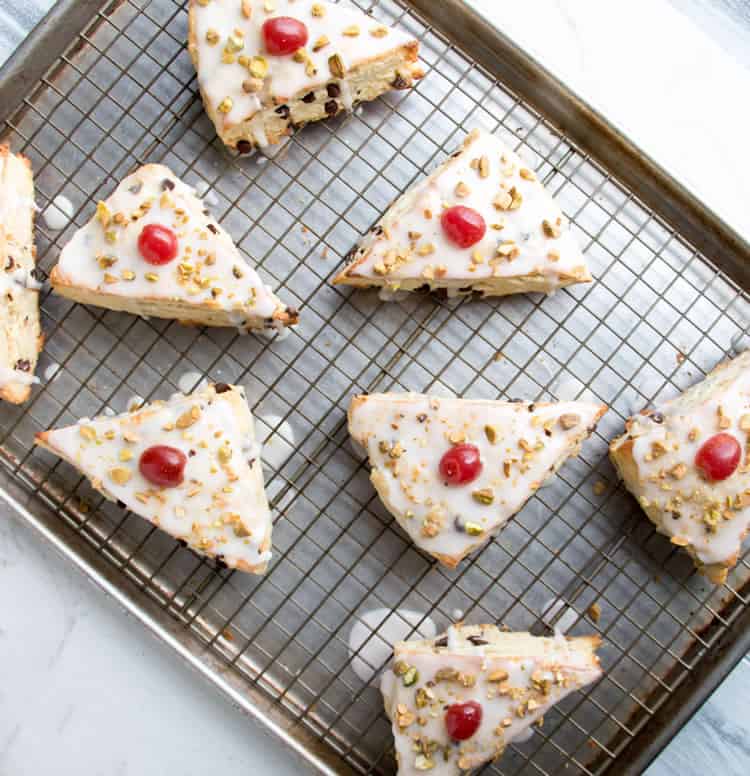 The only thing I rarely do is use cookie cutters. I don’t like reworking the scraps. I might do it for a special occasion, but mostly, I just cut once.

I cut 8 triangles. I almost cut them again to make 16. But I have to tell you, these were so popular, my family was going back for seconds, asking, “Who wants to split another one with me?” So, the bigger scones were just fine.

After baking, I made a thin glaze. I actually tried two different kinds of glaze, but you can barely tell in the photos. I made half with a plain vanilla glaze and the other half with a cherry vanilla glaze.

I loved the cherry on top of these scones! Next time, I’m going to make the whole batch with a cherry glaze.

I’m also going to add more cherries to the top. As we were splitting them, someone would inevitably call dibs on the half with the cherry. So, clearly, more cherries were necessary. They were just so good with the chocolate! 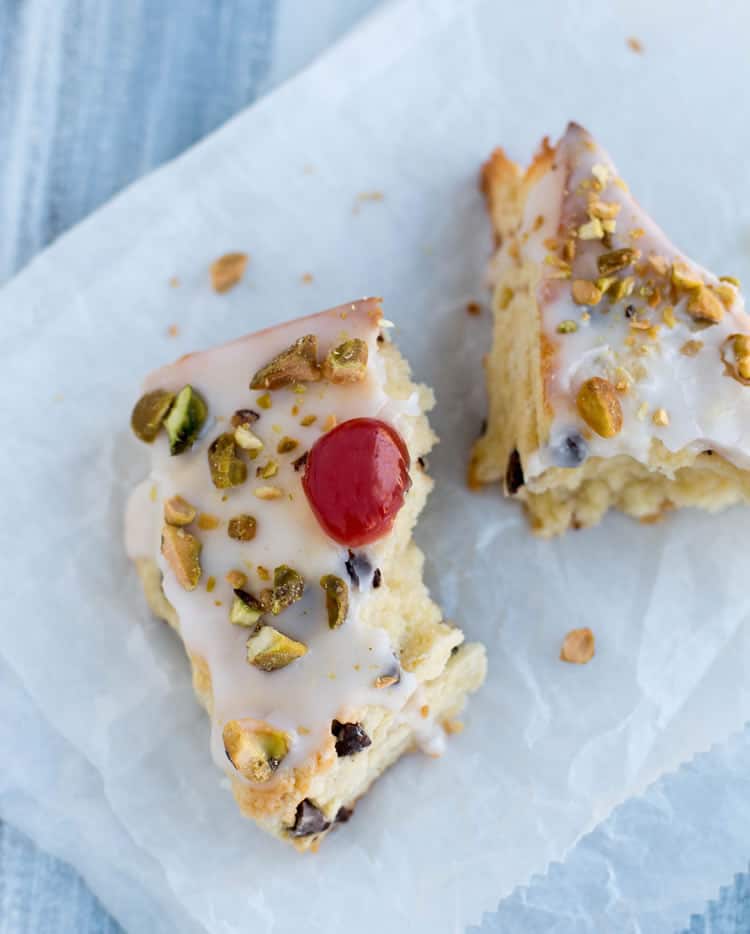 And then… pistachios! A sprinkle of chopped pistachios added some nice texture to the top, a pretty green color and of course, great flavor.

So, yes. I did try to make a cake. And some day I’ll share that darn thing with you.

And while that cake didn’t magically “turn into” these Chocolate Chip Ricotta Cannoli Scones, 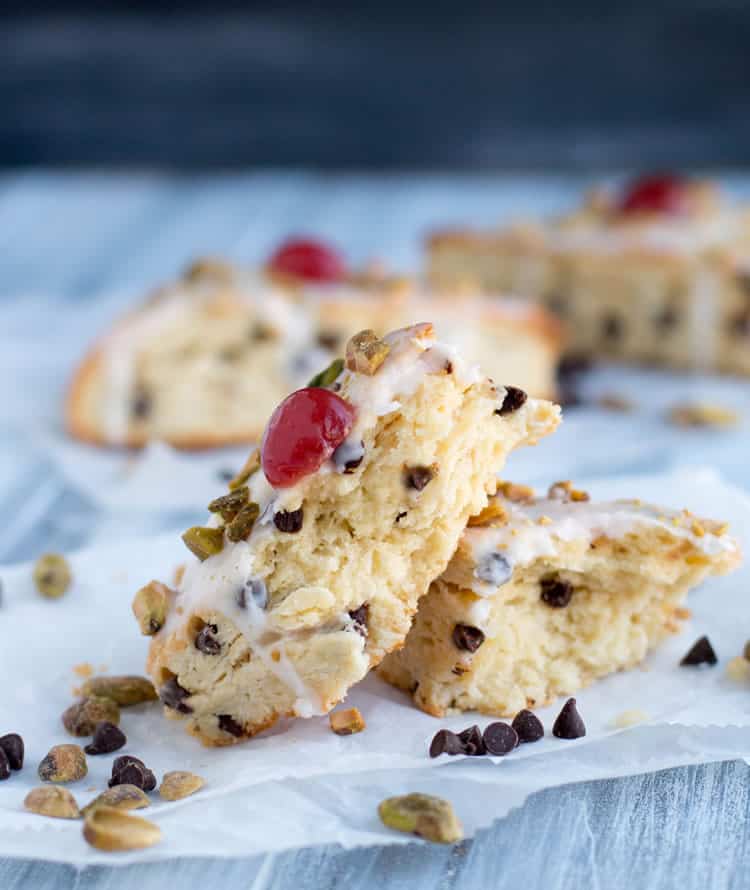 it definitely inspired its creation :)

Make the glaze/add the toppings:

*I buy Tillen Farms maraschino cherries because they're all natural. No food dyes, no artificial preservatives, all natural ingredients. And while we didn't need them for today's recipe, they also come with the stems on which is extra pretty when topping desserts. I buy mine at Whole Foods.

*If you want a sweeter scone, increase sugar to 1/2 cup. Just remember that you have the glaze to add sweetness as well.

*If you want more chocolate chips, increase that to 1/2 cup as well.

*Ricotta cheese often has liquid that collects in the container. Either stir the ricotta to incorporate that liquid before measuring, or pour it off and discard. Either way is fine.

*Remember, if you overwork the dough, it will be overly tough and too dense. If you over bake the scones they will be dry.

*I made a thin glaze, but if you want a thicker glaze, just use less liquid. If you want more glaze, start with 2 cups of powdered sugar and add liquid to desired consistency.

*You can use more cherries, chop them up into smaller pieces and scatter them over the entire top of the scone in the same manner as the pistachios.

*My pistachios were roasted, but unsalted. I think I might have preferred the hit of salt on top of the sweet glaze. I'll probably try that next time.

They were ok Wished the scone was a bit sweeter Think next time I’ll incorporate the pistachios in the dough. I’ll add a bit of orange zest as well. I will try skipping the glaze and sprinkle with either coarse sugar or turbinado. Then maybe drizzle lightly with maraschino glaze . No cherries on top. Maybe add glacé cherries chopped finely in the dough as well.

Kathleen, most of my scone recipes are only lightly sweetened. For me, the icing balances that out. You can easily add more sugar for a sweeter scone and change up many of the flavors. I've tried increasing the sugar to 1/2 cup for a sweeter scone with no major change in texture. You could try more and see how that works out for you. I actually did use a maraschino glaze on half of mine and thought that was the winning move. If you check out my other scone recipes, you'll see that I usually either drizzle icing or sprinkle with turbinado sugar. The great thing about my scone recipes is that they are very adaptable to different flavors/tastes. I love the idea of incorporating the nuts, zest and cherries into the scone itself. I'm sure it would be delicious!

Hi Ramona, I want to make these this weekend , but don't trust myself not to eat too many! Have you ever frozen the unbaked scone for a few weeks? My husband is going to go crazy for these, he loves cannolli. Thanks, Cyndi

Hi Cyndi! I haven't tried freezing the unbaked scone only because I've never needed to. I've been meaning to test it out myself to see if I get the same results as I do when I freshly bake them. I have read in multiple places that you can freeze them with good results. Here's a link with more info for you. The other option is to simply cut the recipe in half and make less. I hope you like them!

Karen, I'm thrilled to hear you share my love of scones, too! It's funny, I worked so hard to figure out that Panera scone and now, years (and many scone recipes later)it seems like it should have been so simple. I think you'll love this one as well. It's different than the cinnamon version, but it's still rich and delicious!