The first memorable scone I had was at afternoon tea at the Four Seasons. 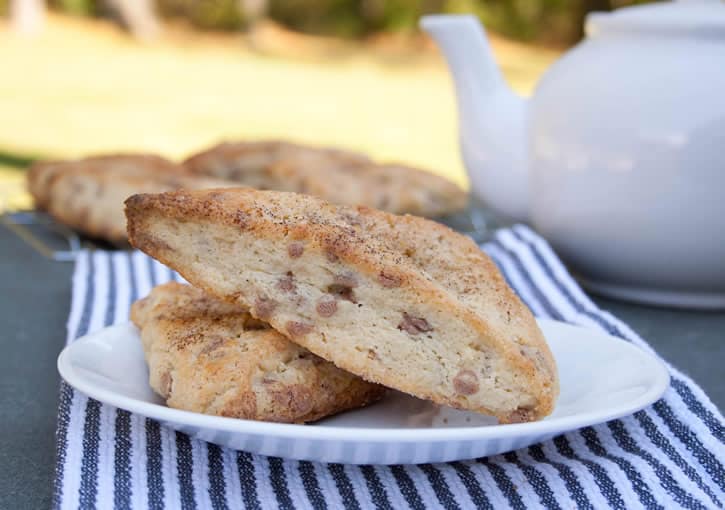 My coworkers had thrown me the most lovely wedding shower at our offices.  It was an afternoon tea theme and they went all out, taking over not only a large conference room, but the lobby foyer as well to create the special event. This location was also a bit tricky since they had to keep me away from an entire side of the office building for fear I would ruin the surprise.  It was quite grand by office shower standards; what else might you expect from teams of merchants, designers and product developers?  They were very skilled at creating a vision and executing it beautifully. (I had such a great team!) 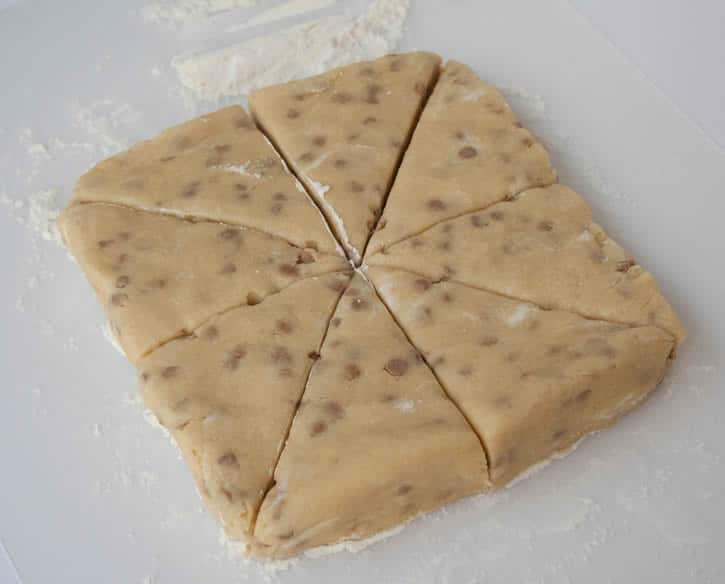 One of the gifts I received that day was a gift certificate for afternoon tea at the Four Seasons. My husband and I enjoyed that gift quite thoroughly one Valentine’s Day weekend as we sipped champagne, sampled exotic teas and nibbled on sandwiches and sweet treats. (I realize the word “nibble” creates this vision of restraint…and while we ended up taking quite a bit home with us, I will admit that neither of us was hungry again until the following day.)  I remember the scones being buttery and tender.  They were so good with the Devonshire cream and lemon curd that was served with them.  I asked if I could get the recipe, but to no avail.  And thus the search for the perfect scone recipe commenced. 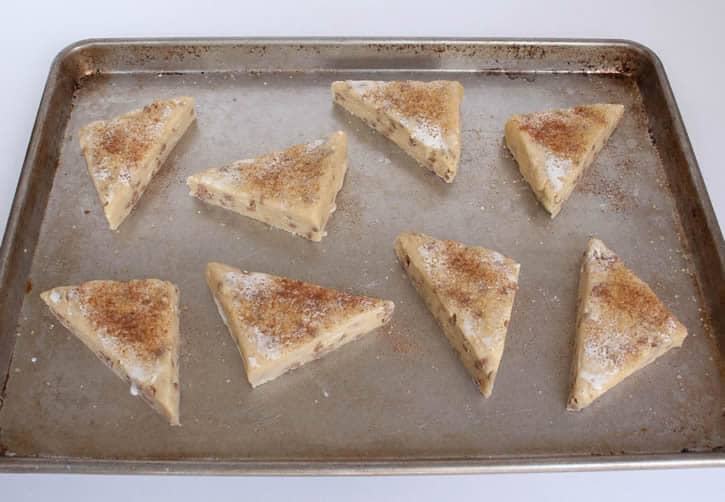 Scones started to gain quite a bit of popularity in the following years and everyone seemed to have their own favorite coffee shop scone.  Many complained about dry scones, which I’ve luckily been able to avoid most of the time.  I came to love a dense, buttery scone and my favorite, easily accessible scone, was Panera’s cinnamon scone.  I had tried many scone recipes and most of them were quite good, but none had that dense, almost shortbread like richness that was tender and melted in your mouth.  Many of them were more fluffy…still good, but to me, more like a biscuit and less like the scone I was after.  I kept searching the internet and my cookbook library for a “dense buttery scone.”  None of them were dense enough…and while dense is hardly a pretty word to describe a scone, it was the best description I could offer. 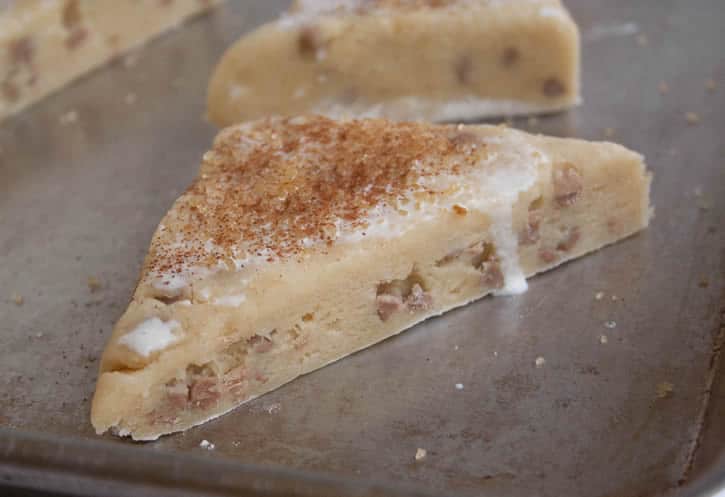 What I learned is that I was looking for a “short scone” or a scone that had a higher ratio of butter to flour (I suppose that’s why shortbread is named as it is.)  The short scone recipes I found were good, but not “short” enough for me :) 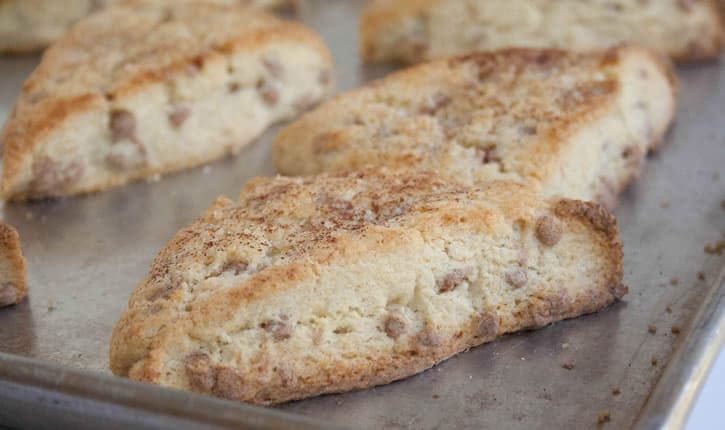 It took two years of research and trials (it takes that long because you can only make, eat and give away so many scones in a given time frame before everyone involved starts rebelling, so pacing is necessary…) before I came up with what is now my favorite short scone recipe.  I tried different milks, different ratios of liquid, with an egg and without, with just an egg yolk and with different ratios of butter to flour.  I’m glad I finally figured it out because Panera has changed their cinnamon scone recipe and drenched it in a heavy dose of sugary glaze.  I’m not fond of the new scone, but I’ve heard it’s selling 10 times better than the original, so I don’t expect it will ever switch back.  But this recipe, yes these are currently My Favorite Cinnamon Scones.

Because I love scones so much, I will be sharing other favorite scone recipes in the future.  But this is the one I labored over (and will likely still continue to tweak.) It’s buttery and tender and decadent and rich and worthy of a fancy afternoon tea.

It’s been more than a few years since I had that scone at the Four Seasons. I need to get back to see if 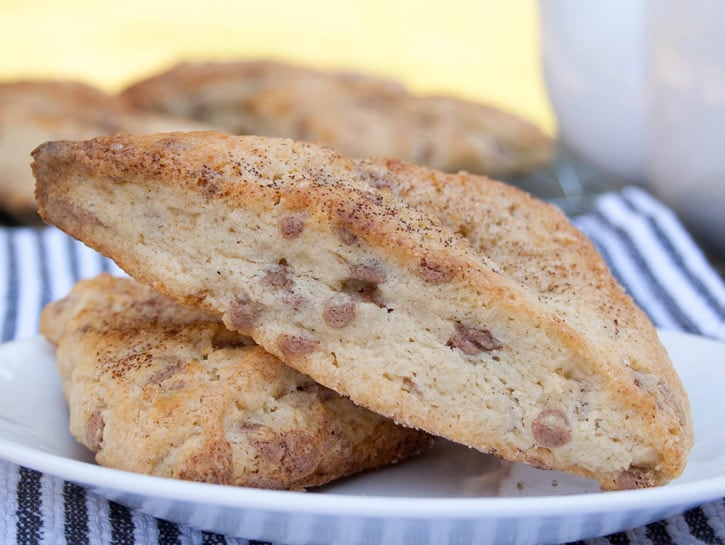 their scone still measures up ;)

I had a small recipe glitch from 9-12-15 until 9-14-15, where another scone recipe was accidentally showing up as part of this post. It had a completely different name, which would have been confusing. I have corrected the issue and the recipe below is the correct and original recipe.
Servings 8 large scones

*I use King Arthur Flour cinnamon chips because they have no trans fats and I think they have the best flavor. I also love using their cinnamon flav-r-bites for a more intense burst of cinnamon flavor.

*Store baked scones covered at room temperature, but not air tight. Because of the high butter ratio, these will still be good the next day or even two.

*They can be reheated in a toaster oven to bring back a bit of the crisp edges, if desired.

*You can also freeze them after you cut and separate them on a tray, then put them in a zipped freezer bag to bake at a future time. Just add a couple of minutes to the baking time.

Made these this morning. SO tender, light and delicious! My husband drizzled some icing and said it was great. Thank you!

Lisa, I'm glad you and your husband loved them! I have icing lovers in my house as well and often leave some scones plain and drizzle icing on others so that everyone has a choice. If you love these scones, you must check out my other scone recipes. I think you'll love them too!

These are in the oven right now— well a version— I used Salted Carmel Chips and brushed with cream and sprinkled with brown sugar on top. I made the Butter Pecan scones and fell in love with scones!! I always thought they were horrible and tasted like glue, but those were the absolute best little fast breakfast, I am super excited to see how these turn out! ❤️ Thanks for all the recipes, even when I don’t follow directions very well it’s so wonderful to have a base recipe that always turns out amazing! Hope you are having a blessed day! 😊

Heather, you are so welcome! I bet they'll come out great! And, I like to think of recipe directions as a guide to success. Once you understand what can be substituted and switched and changed successfully, then I always feel like it's game on! This is the mother of my scone recipes. If you check out the others you'll see where I've done all kinds of substitutions and variations using different levels of butter, cream and alternate fats. And I love them all! Hope yours turns out just the way you like :)

I have never made a scone, although I am good baker and cook. I just pulled these out of the oven and they look amazing. I made them so I could have scones and tea as I watch Serena in the finals at Breakfast at Wimbledon this morning. Thank you for sharing - I love anything with cinnamon!!!!!

Dedi, I'm with you and loving cinnamon. And, it's so good in these scones! What a fun way to watch the finals :)

These are delicious!! I'm an amateur, and they still came out great!

Joan! That's so exciting to hear! Sounds like you're not an amateur anymore :) Now you can move on to all of the other yummy scones I have on the site!

Thought I would try and leave one more comment:)

I tried the strawberry scone recipe subbing in the cinnamon and the cinnamon chips instead of the berries. This too is an awesome scone recipe. This recipe did indeed rise a bit more than the above scone recipe, allowing the scone to be cut in half and buttered a bit easier. So thanks so very much. They are just fantastic recipes!

Thanks Jen! I'm glad you got a bit more rise out of that version. When it gets to egg nog season, try out the egg nog scones. I think you'll love the rise on those!