And just like that, Valentine’s Day is just one week away. I often make brownies around Valentine’s, but this year I thought, why not a triple threat? I’m not just making any old brownies, I’m making Strawberry Cheesecake Truffle Brownies.

Yep, these brownies are all dressed up and pretty in pink!

I’ve shared quite a few brownie recipes with you. There’s the mother of all the favorites, Black Cocoa Brownies. In that post, I talk all about my search for the perfect brownie. That’s the closest to my fave so far, as far as a base brownie recipe.

I mention in that post how important the cocoa is to a good brownie. And because I think it’s important, and because you might not have read every single post I’ve ever written, I will happily mention it again today. 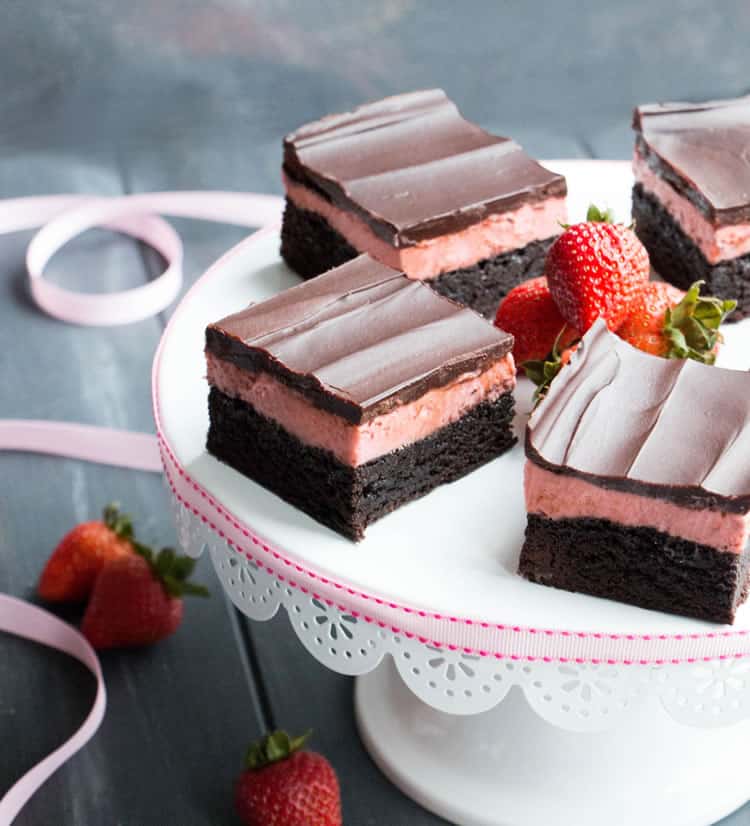 One of the reasons I love that Black Cocoa Brownie so much is not only because of the texture, but because the black cocoa brings such a rich flavor to it.

Oh…and then there’s Mayan Brownies. That’s become one of our favorites. And for that one, I used a completely different cocoa. If you are a brownie lover, you should definitely experiment with different cocoas. 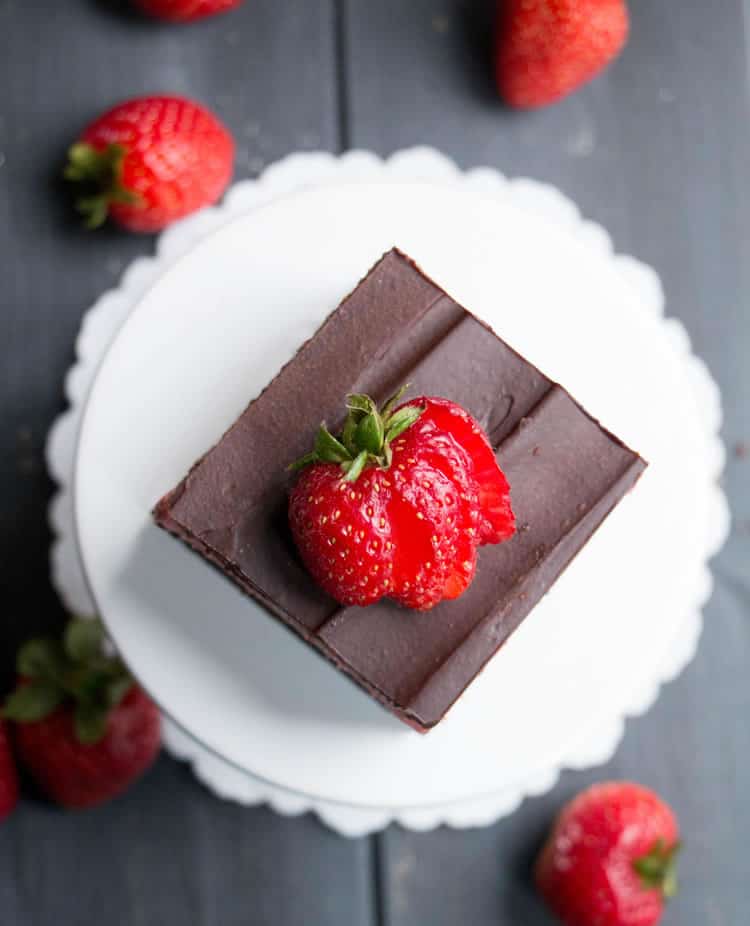 Today, I’m encouraging you to experiment with another ingredient, freeze dried fruit.

Freeze dried fruit is the whole fruit and nothing but the fruit. The water is gone and what you’re left with is tons of real fruit flavor.

And what’s cool about it is that you can add that real fruit flavor bomb to places where the fresh version of that fruit might not work as well.

I first used freeze dried fruit powder when I bought this Lemon Juice Powder. That stuff is fantastic for adding a burst of fresh lemon flavor to just about anything. It’s so much fresher tasting than an extract. Why? Because it’s real lemon flavor.

I’ve added that lemon powder to pancakes and muffins and cakes and frostings and, well, you name it. 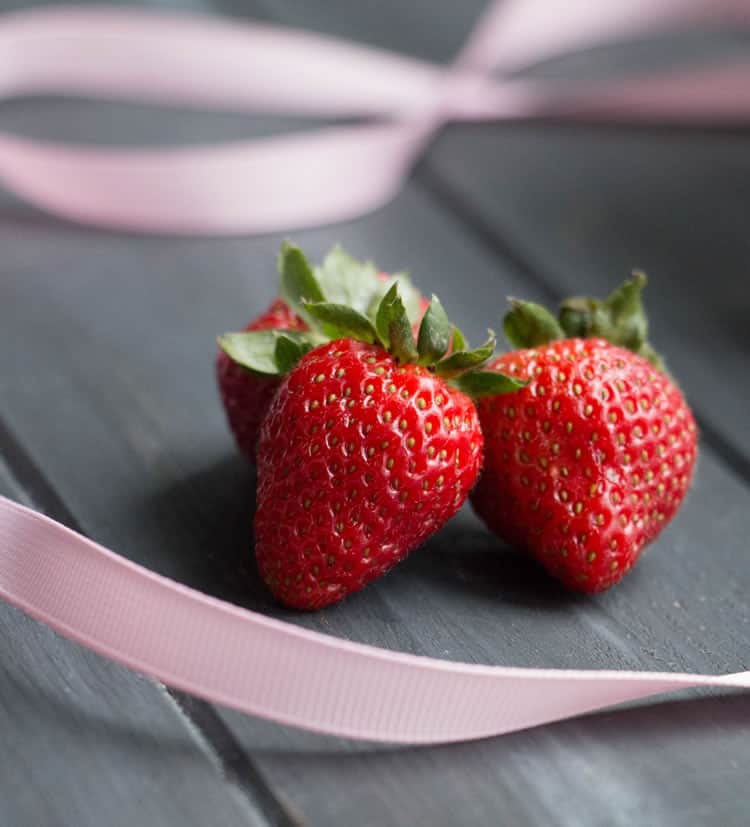 I almost picked raspberries as my fruit of choice for today, but I was thinking about chocolate covered strawberries and thought I’d go with that instead.

I find my freeze dried fruit at Trader Joe’s, but I’m starting to see it more often in the produce section of my regular grocery store. 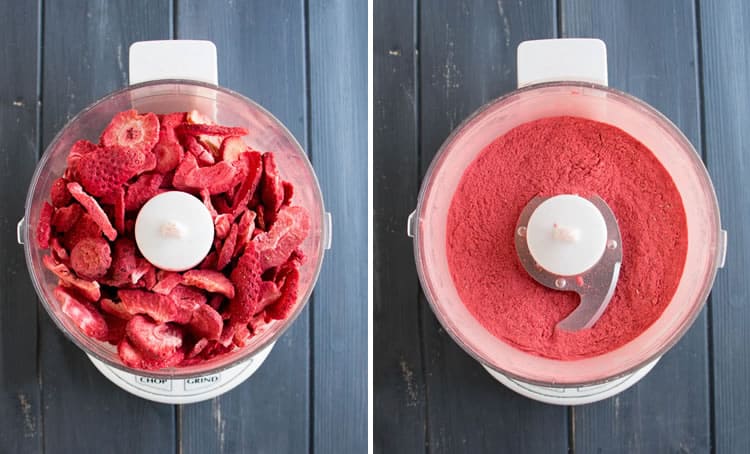 All you have to do is grind that fruit into a powder. I do that in my mini food processor.

It only takes a second to sift out the seeds. I like my fruit powders to bring flavor, not a crunchy seedy texture, so for me, the seeds must go.

Because you have to cool or chill each of the layers, there’s some time involved in making this recipe. Plan ahead. I made the brownies the day before I filled and topped them. 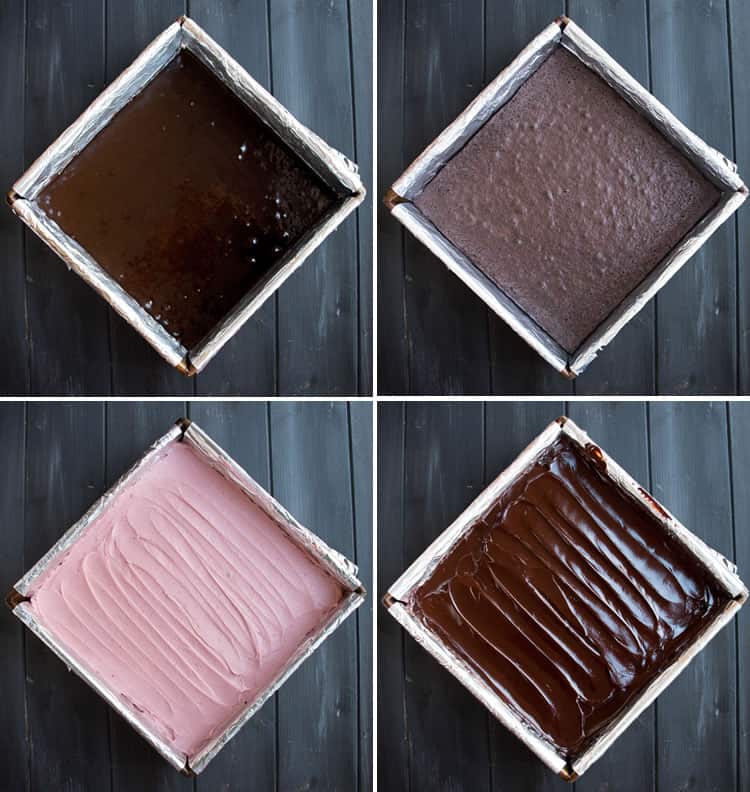 The brownie recipe is an easy one bowl recipe. It’s a version of my Mayan Brownies recipe, but I left out all the spices, switched to olive oil as the fat and I left out the chips.

And, I only left out the chips to exercise the tiniest bit of restraint. I figured I was already topping the brownie with cheesecake and ganache….but hey, add chips if you want. More chocolate? Sounds good.

You want to use melted butter instead of olive oil? Also good. 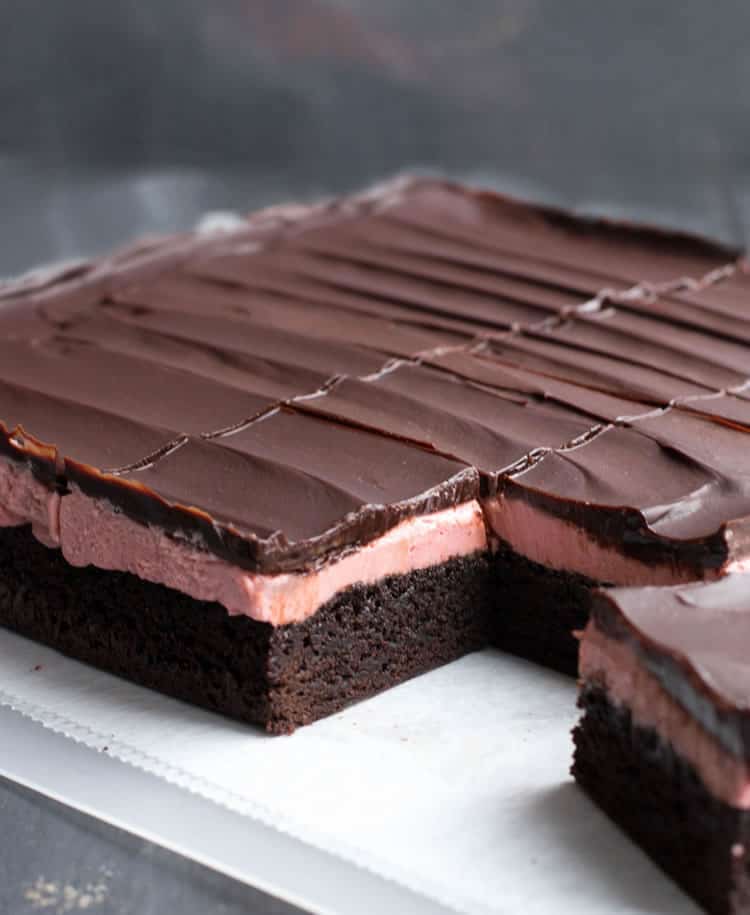 It’s pretty easy. Just whip up the cream cheese, sugar, salt and vanilla. Then, sprinkle on that magical fruit powder and drizzle in the whipping cream while you beat the whole mixture to stiff peaks.

I always add fruit powders when I add the liquid ingredients. It gives the powder a better chance at rehydration and will give you the smoothest texture. 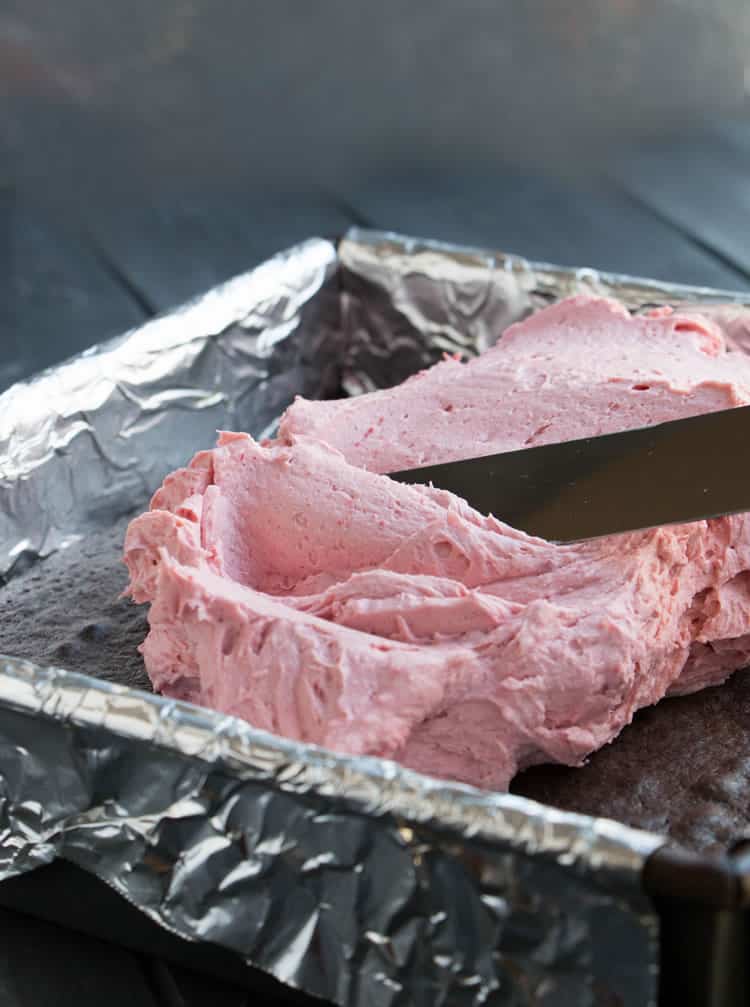 I always make a dark chocolate ganache. I always make it on the stove. But, I decided to make it in the microwave this time.

I just heated the cream and corn syrup in a microwave safe bowl and it really was faster and easier and saved having to wash a sauce pan. I’m not sure why I didn’t try it before.

For this recipe, since there were multiple steps, I was motivated to make each step as easy as I could.

Once the ganache cools down, but is still glossy and spreadable, it goes right on top of the cheesecake layer. 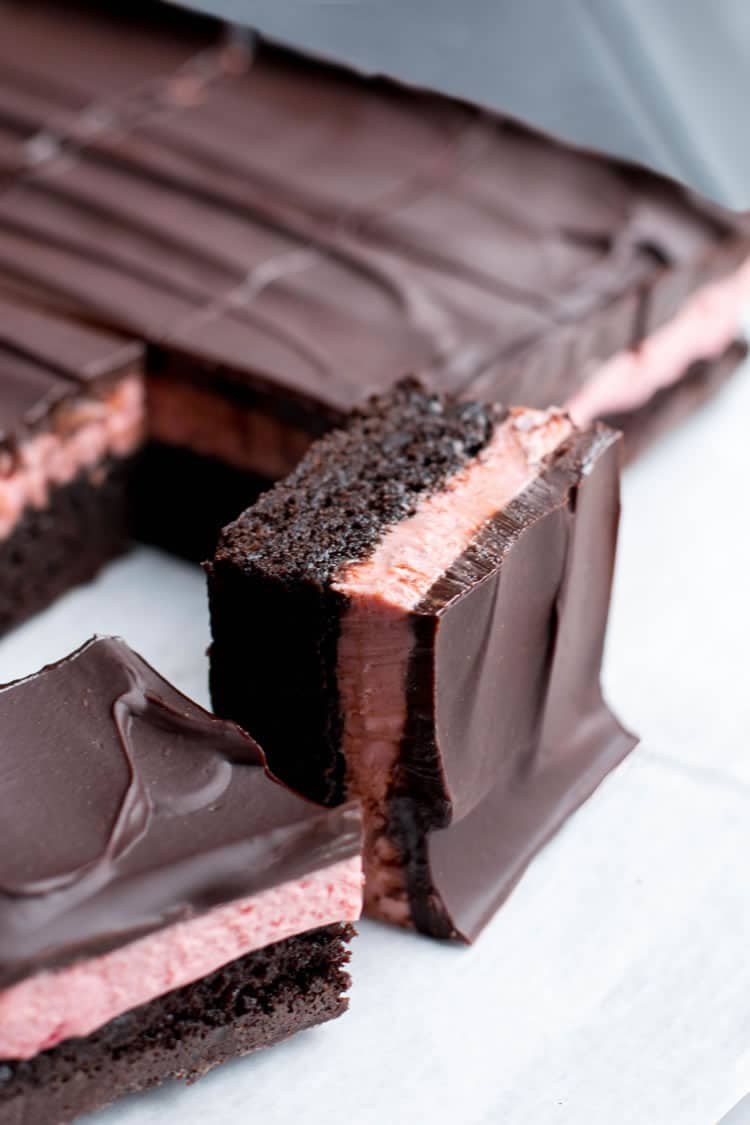 Now you could, theoretically, dive right in and cut up those brownies while the ganache is still soft. It will be messy, but it will be delicious.

I, on the other hand, wanted some nice, clean cuts, so I chilled mine until the ganache was set. I then used a hot knife to cut into them.

The hot knife is great for getting a nice clean cut through the ganache. If the knife is really hot, it will really melt the ganache and that melty chocolate will bleed into your cheesecake layer. Still delicious. Not so pretty.

If you cut the squares cold, straight from the fridge, without a hot knife, the ganache top might crack a little. 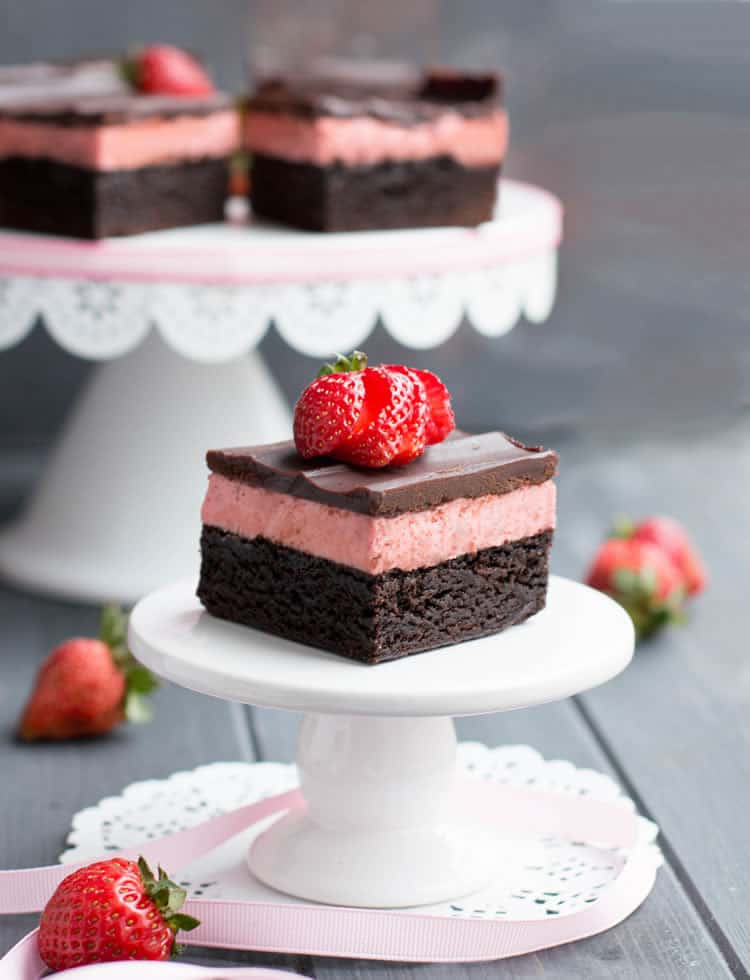 The cleanest cuts I could get were by cutting the bars when they were cool, but not cold. In other words, you want the ganache set up enough so that it doesn’t spread to the cheesecake layer, but cool enough to get a nice clean cut.

Basically, I just let them sit out for about 30 minutes at room temperature and cut them with a sharp, (not hot) knife. That gave me the cleanest cut.

Don’t worry if they’re not perfect. Some chocolate will get through to the strawberry layer on some of your cuts. 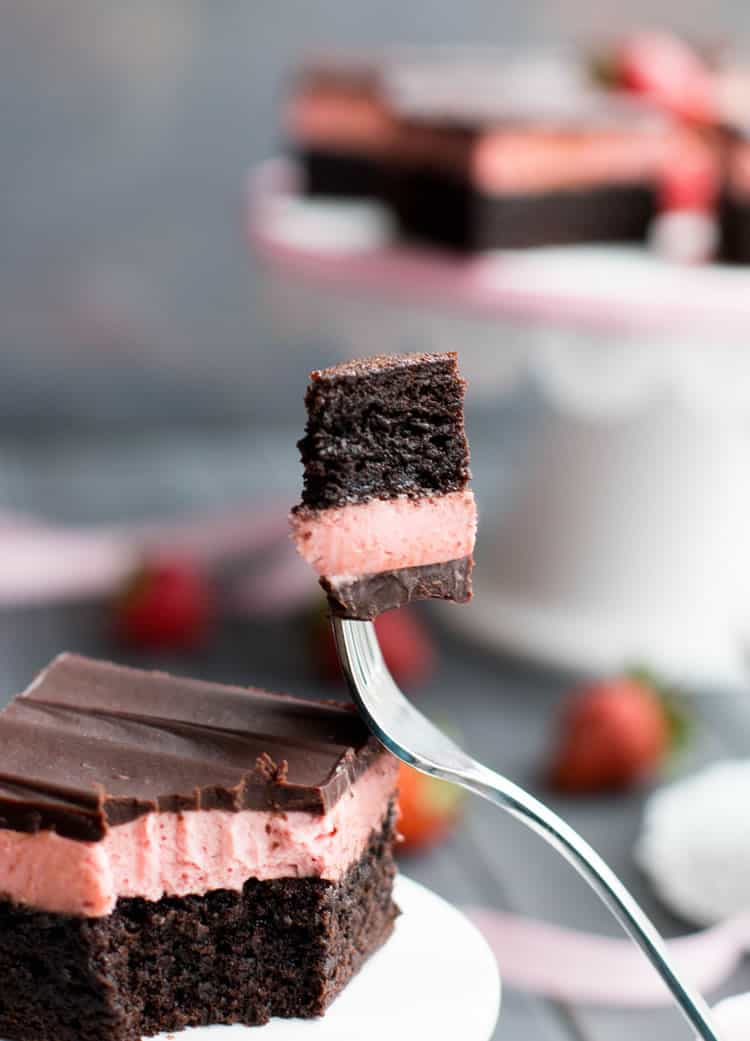 *There are multiple cooling steps involved so plan ahead. It may take a few hours for the brownies to completely cool. You could make your brownies one day and then make the filling and topping the following day.

*If you cut it with a cold knife and the ganache is very firm from the refrigerator, you may crack the top of the ganache. To avoid this, you can let the squares sit at room temperature for about 15-30 minutes so that they are still chilled but the ganache is a little softer to cut. I was able to get some nice clean, non-chocolate smudged cuts that way. I also had some success with gently heating a sharp knife in a cup of hot water and wiping it dry before making a cut. Repeat heating and wiping clean after each cut. This method will melt the chocolate a bit and you may see that smudge the cheesecake layer. The secret is to not over heat the knife. Just make it barely warm enough to cut through the ganache layer.

*Brownies should be stored in the refrigerator.

*I almost always add chocolate chips to my brownies. This time I omitted them, but feel free to add a cup of your favorite chips to the brownie batter, if you desire.

Hi, can this be made with any box brownie mix?

Absolutely, Vanessa! Feel free to use your favorite mix. It's a great shortcut!

So cute! Perfect for Valentine's Day!