What is it about a photo of brownies covered in glossy chocolate ganache that is so wonderfully distracting? Really, I’m craving these darn Mayan brownies just by looking at them. Mmm…Mayan Brownies…..Hmm? What’s that? What makes these brownies Mayan Brownies? 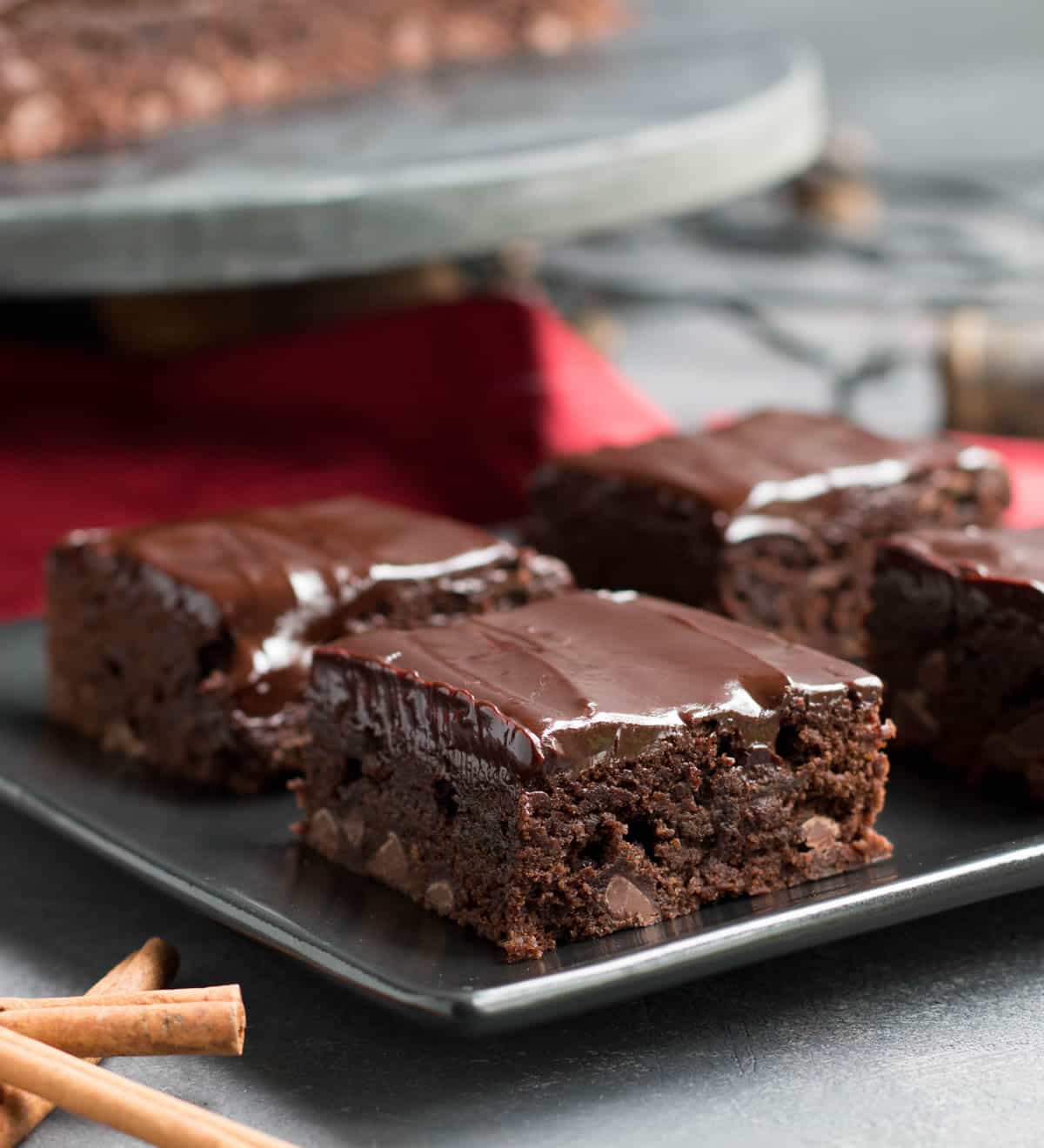 Well, there’s the chocolate part, of course. The Mayans were one of the early civilizations that used cacao. And, since I’m not an expert on the subject, I won’t digress into the full history of cacao and the path it traveled before the Mayans began to use it. There are theories out there for you to research and agree or disagree with should you have a passion to learn more. 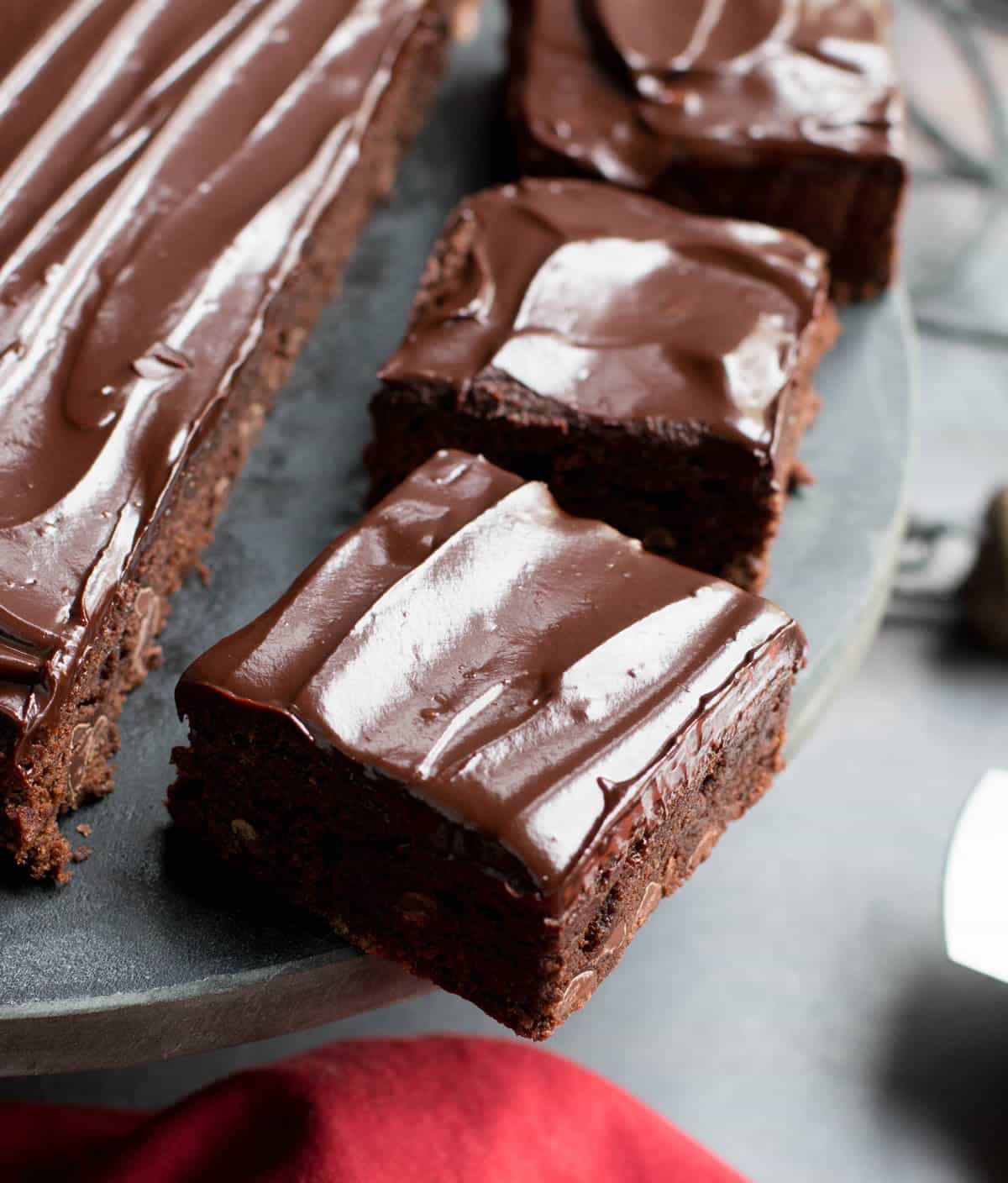 I will, however, mention a bit of how some believed the Mayans used it. Their process of enjoying cacao was to make it into a drink. They made a liquid of crushed cocoa beans, chili peppers and water. It wasn’t sweet; rather it was a bitter drink. They poured the liquid from cup to cup until a frothy foam was created on top. Think of it as an early cappucino, if you will :)

Cacao was treasured and the Mayan’s called it, “The food of the Gods.” And therein lies the inspiration for this recipe. First chocolate (always a good place to start), then spice and heat…with chocolate. Oh, and Cinco de Mayo :) 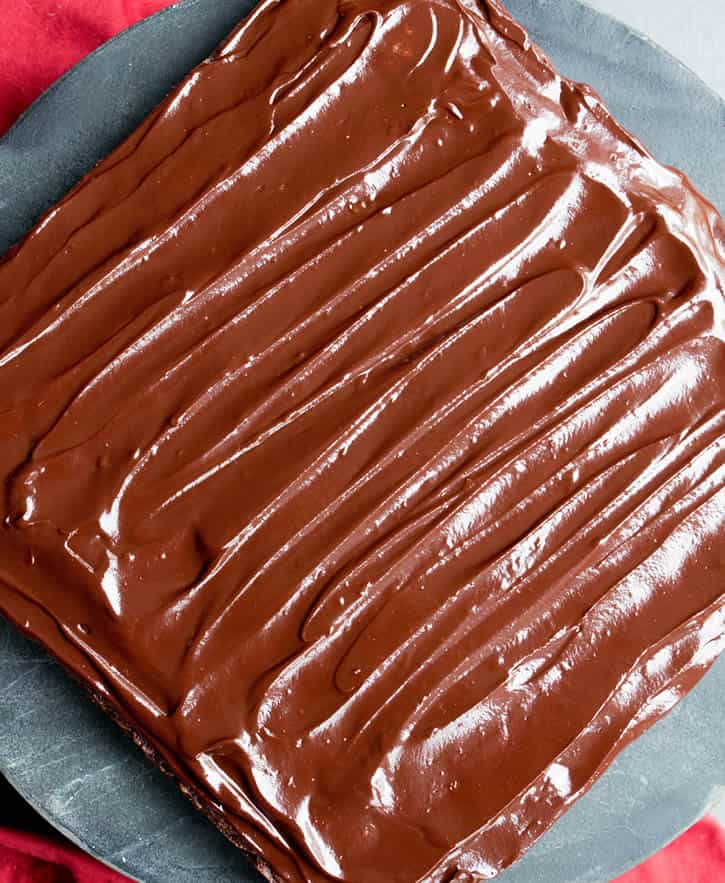 That’s right, I was actually going to develop this recipe for Cinco de Mayo a couple of years ago, but I went with Dulce de Leche Brownies instead. I received so many rave reviews on them, that I just had to post them. But that was then, and this is now, sooooo, Mayan Brownies. Let’s chat about them.

Chocolate has been going through quite a trend for well over 10 years now. It’s always been popular, but stop for a minute and take notice of all of the gourmet chocolate bars and flavors and brands that have increased in both amount and flavor variety. There’s a lot more shelf space dedicated to it now then, say, 10 or 15 years ago. 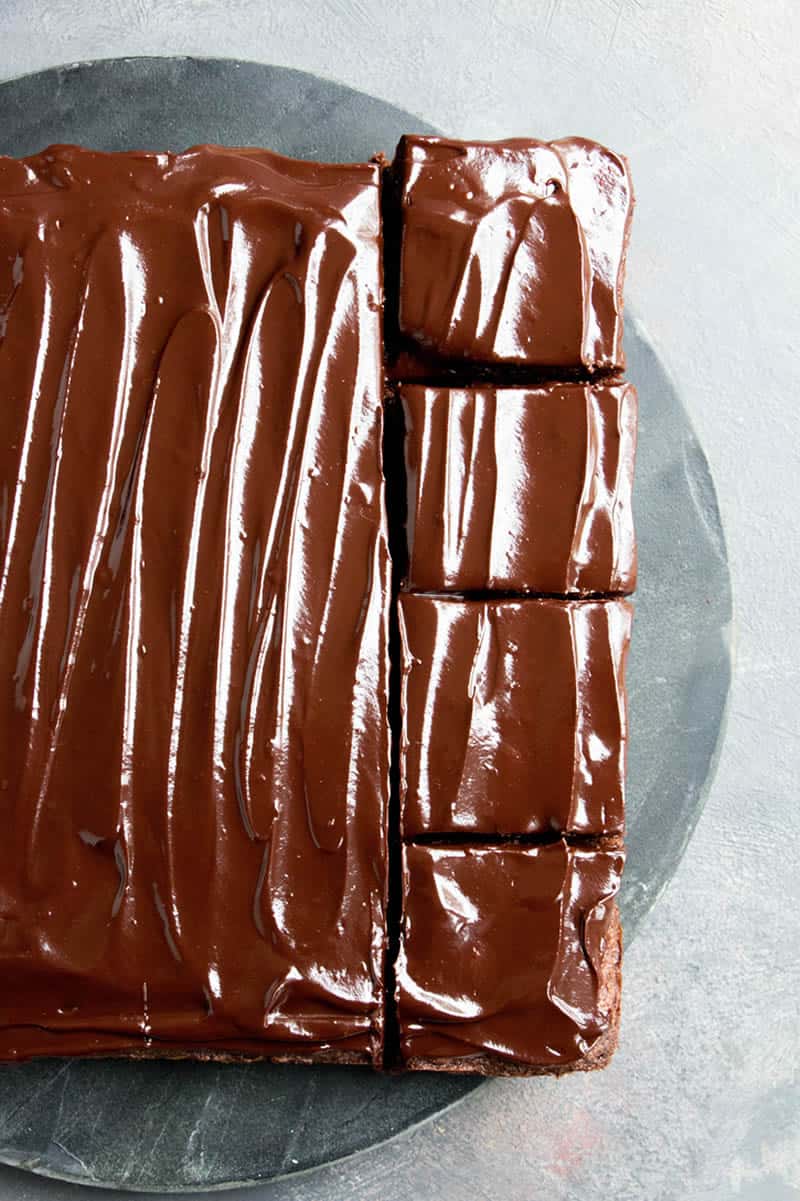 I still remember the day I received a box of Vosges truffles as a gift. I was at work and I called some buyers into my office to sample the goods with me. I think I may have even written about this before, but we were reduced to sighs of enjoyment with every exotic flavor bite. We weren’t mindlessly snacking on chocolate. We were experiencing it.

Fast forward to today, where exotic flavored chocolates are everywhere. There’s a local shop near us that makes Mayan chocolate candy and Mayan chocolate ice cream. My daughter is a huge fan. 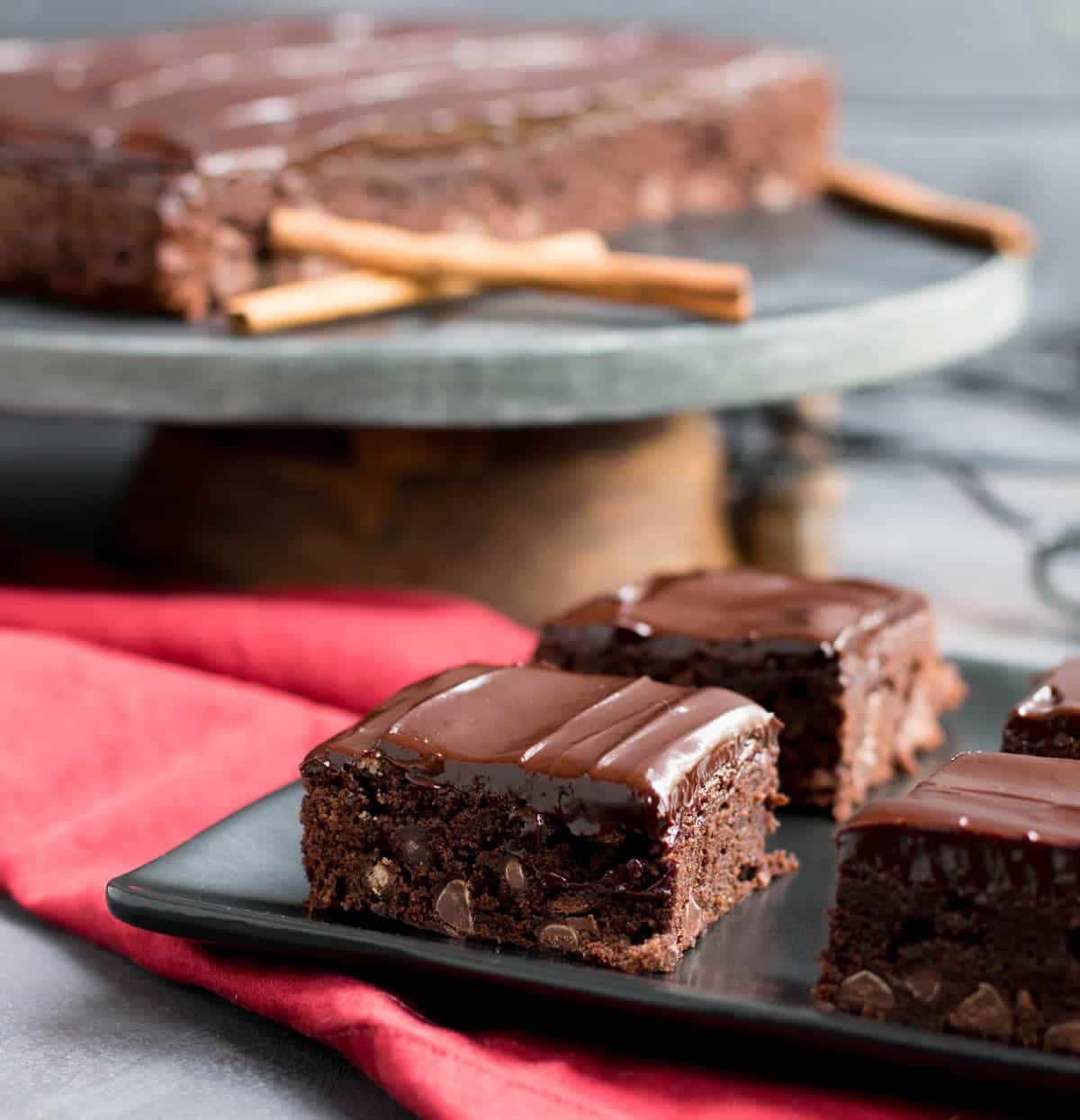 So that’s what I wanted to do with these brownies. Add the flavor of the Mayans…and then some.

I started with a sweet spice. I knew I wanted to include cinnamon. So, I added Vietnamese cinnamon. It’s sweeter and more potent than the average grocery store cinnamon, so if you use that, you could increase the amount by 1/2 teaspoon or so to make sure you get the full punch of flavor. 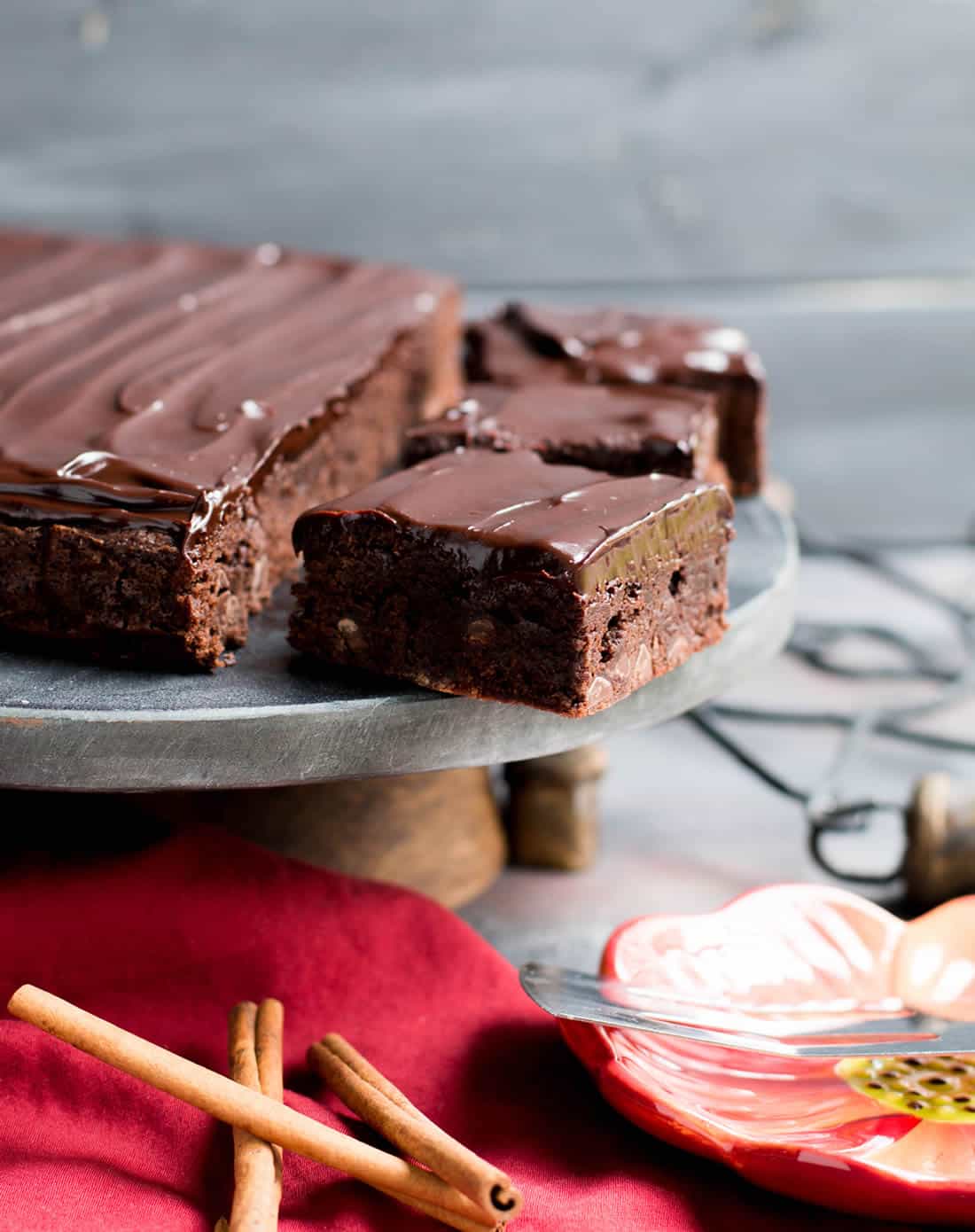 Then, I added some mini cinnamon chips. Just 2 Tablespoons. I didn’t want to overpower the chocolate, so I just added enough to disperse throughout the batter.

The heat comes in the form of ground cayenne pepper. It is simply added to the dry ingredients. The question was, how much pepper should I use? I landed on 1/4 teaspoon. You? You could land on more and add a serious kick. The amount I added was definitely noticeable, but not overpowering. 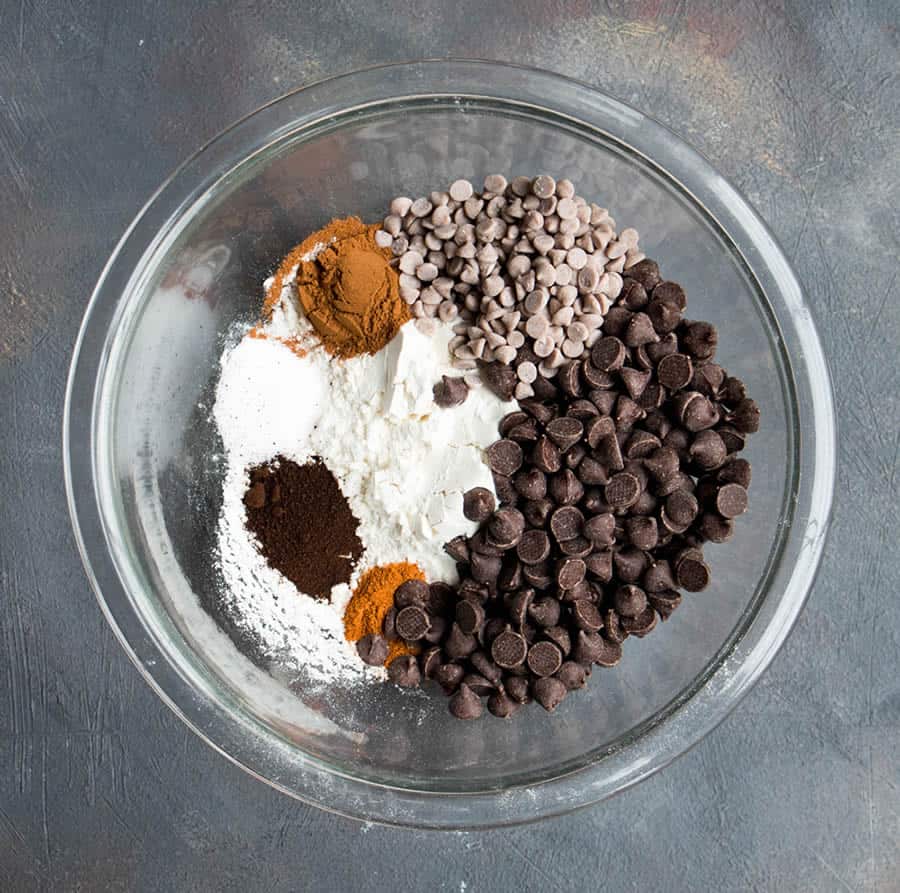 With that amount, the heat presents itself as a partner to the cinnamon, kind of amping up the warmth of that spice. So, as you’re eating it, you taste the cinnamon first and then you feel the warmth of the pepper. It was enough to excite the palate without worrying that my kids would be running for a drink.

It’s kind of cool because after you eat the brownie, the warmth stays with you for a bit. It’s a gentle, comforting warmth. I thought it was a perfect balance.

But, we like our pepper heat more on the mild side. Like I said, if you’re a heat seeker, you can use as much cayenne as you want. I would start with the recipe amount and then adjust to taste the next time you make the recipe. No use in ruining a whole batch of brownies if you can’t handle the additional heat, right? 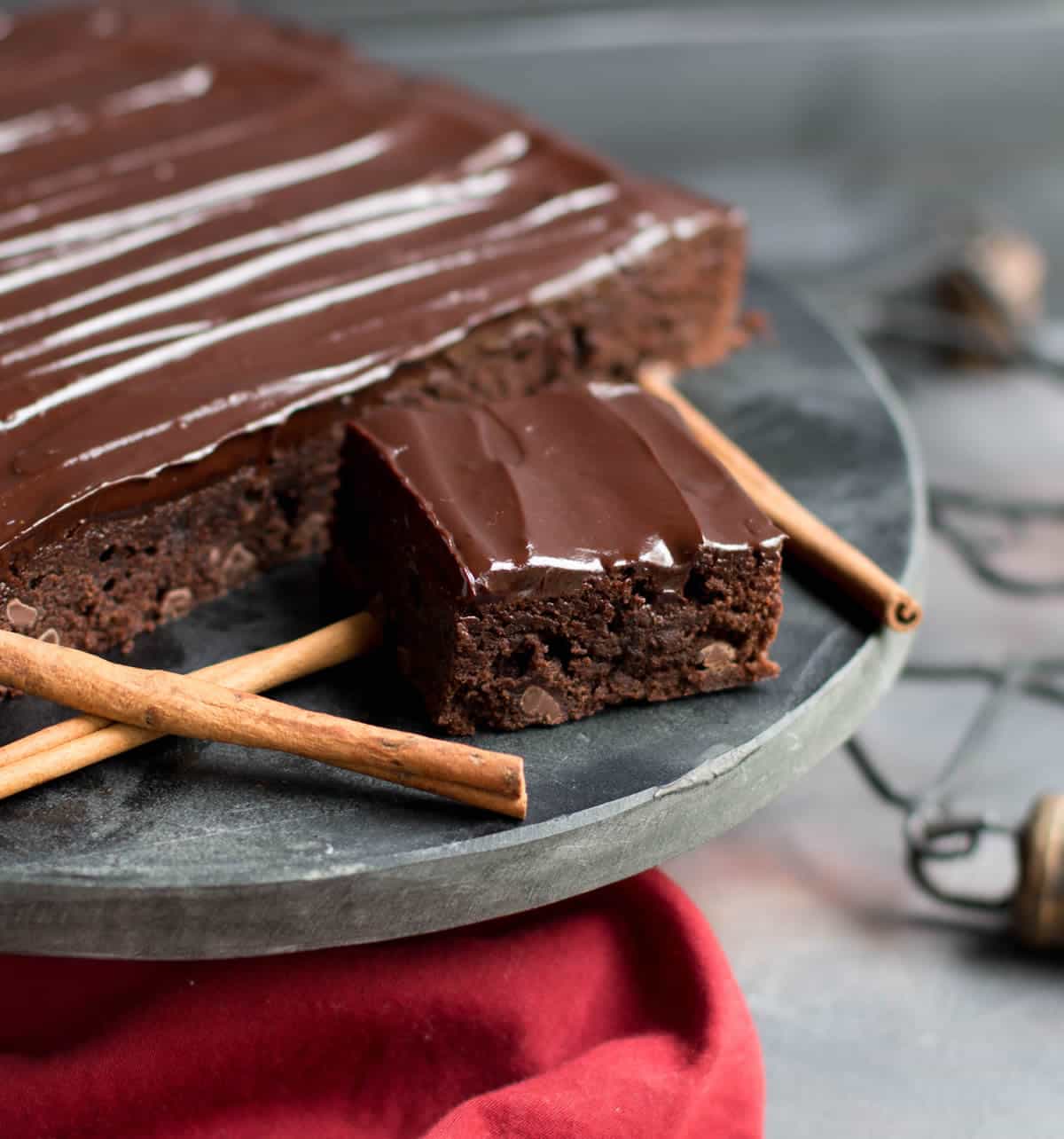 Of course, they smelled amazing while they were baking. The aroma of cinnamon and chocolate wafting throughout the house was wonderful. That aroma inspired the next part of the recipe…the ganache.

I thought, why not infuse the ganache with more cinnamon flavor? I happened to have some cinnamon sticks on hand, so I broke them up a bit and let them steep in hot cream before I used the cream for the ganache. That steeping step added just a hint of spice to the ganache. 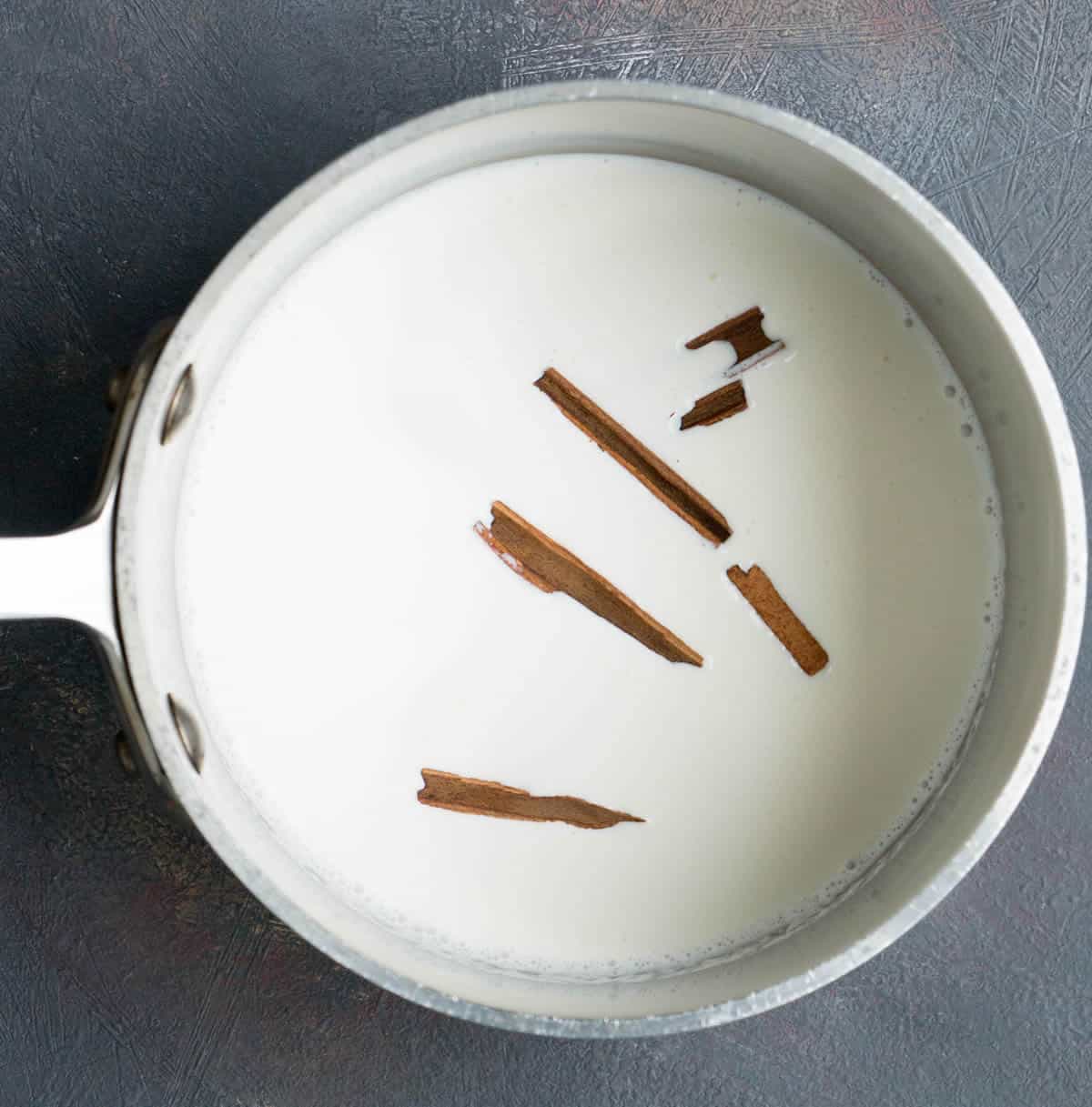 I thought that perhaps my cinnamon sticks were not as potent as they could have been, not exactly remembering when I had bought them :/ So if you purchase them fresh, just for the recipe, you should get more flavor than I did. However, I didn’t want it to be too strong, so it worked okay for me.

Of course, if you want a stronger flavor of cinnamon and want to skip the steeping step, just add a pinch of cinnamon (or to taste) to the cream before you add the chocolate. 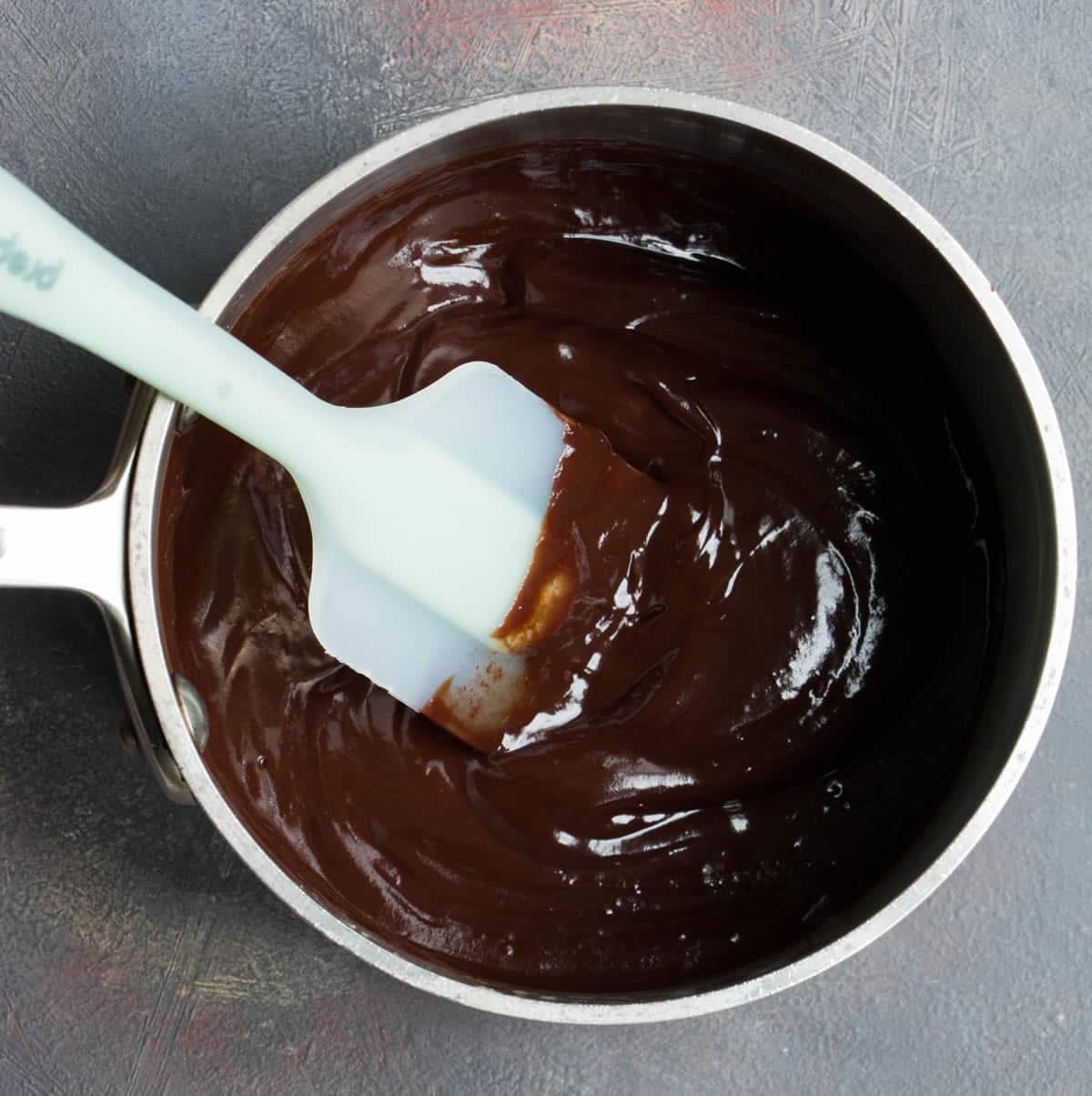 I’m very particular about the cocoa. Check my Black Cocoa Brownies post for more on that subject. Good cocoa makes good brownies. The same recipe made with different cocoas will taste very different. So use your favorite, good quality cocoa.

I love using Double Dutch Dark Cocoa for most of my chocolate baking, but for this recipe, I went with Triple Cocoa. I didn’t want the chocolate to be so dark and rich that it might compete with the other flavors. Don’t get me wrong, I’m sure I would have loved it too, but I opted for a cocoa that didn’t have quite as much black cocoa in it.

Now let’s get to the fun part. This brownie is both cakey AND fudgy! In my historical quest for the perfect brownie, I tried to balance cakey and fudgy and chewy. That’s no easy feat since those traits often work in opposition to each other.

The recipe that worked the best for me was Black Cocoa Brownies. That is my current favorite base brownie recipe…and yet, I didn’t really achieve perfection with that one. 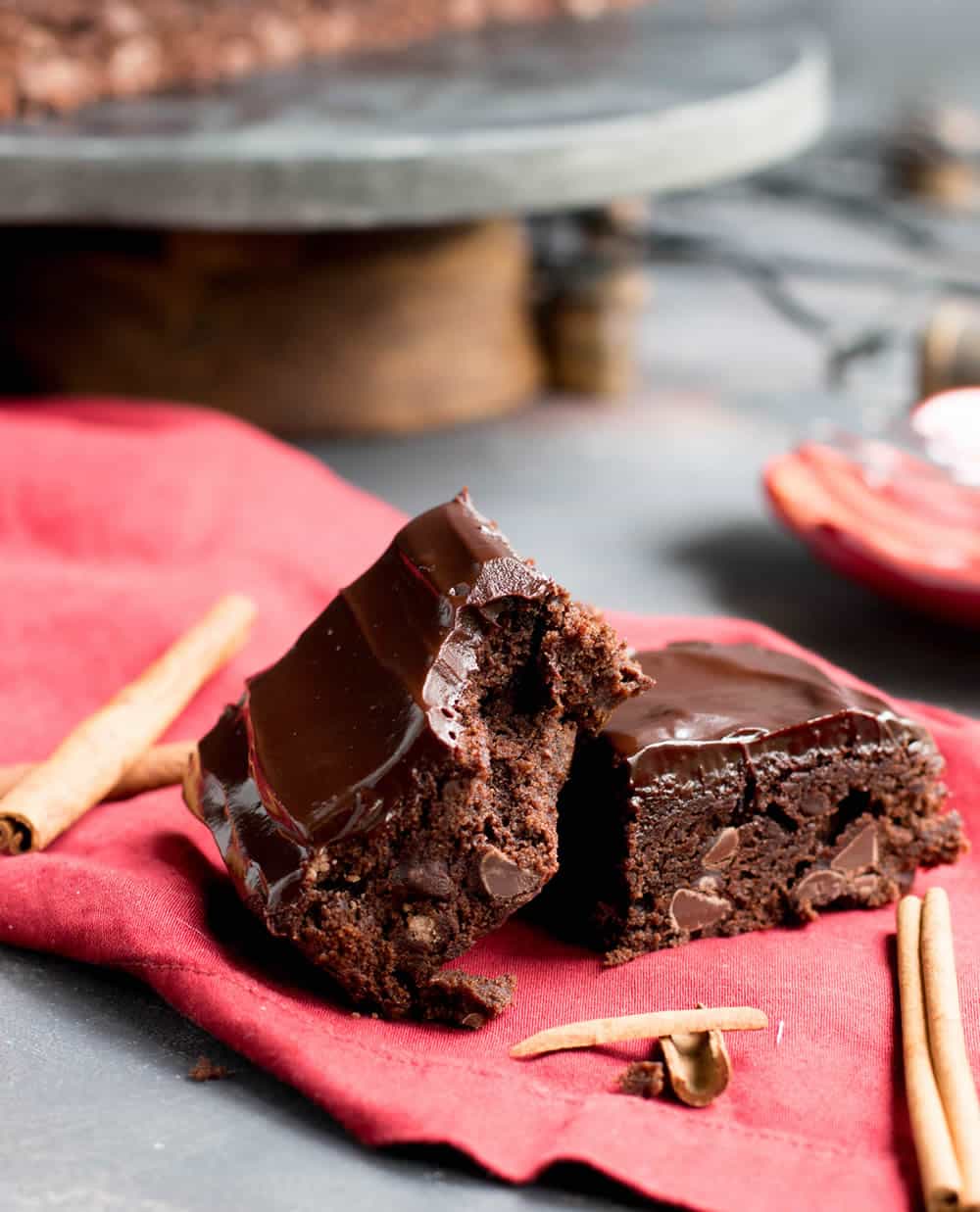 And I didn’t achieve perfection with this one either. I’m not sure that it exists in brownie land. Instead, I think that there’s just a host of really great brownies to explore. This will simply be another one of them :)

For this brownie, I will tell you that at room temperature, it’s a little more on the cakey side. When it’s cold, right out of the refrigerator, it’s dense and fudgy. The ganache is a fudgy constant regardless of temperature, so it functions as a nice bridge to the various brownie textures.

When all was said and done, and spiced and baked and steeped and ganached…this turned out to be a successful and exotic twist on a favorite treat. So, be like the Mayans! Get some spice on with your chocolate. Make some Mayan Brownies! Then you, too, 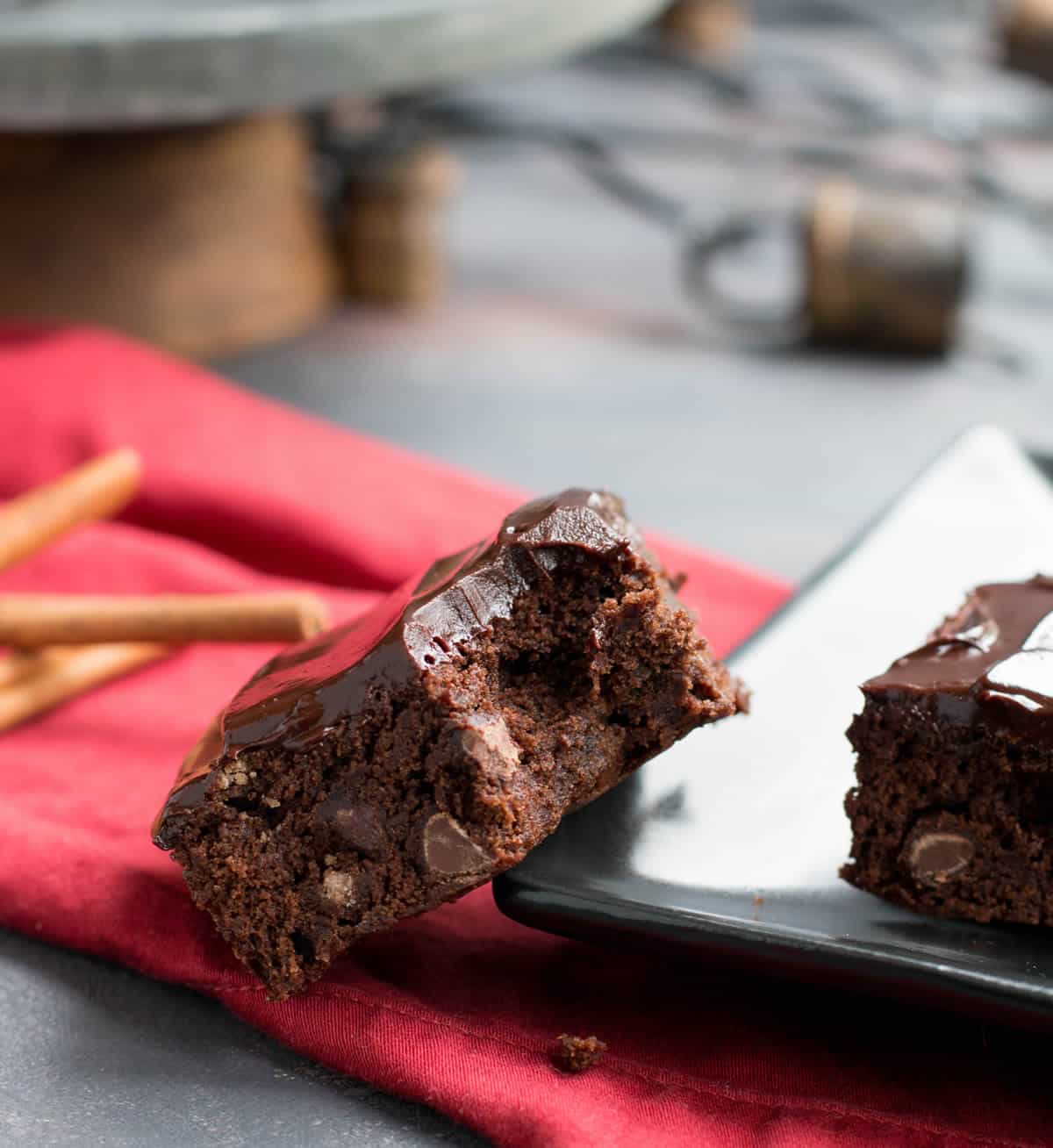 For the cinnamon infused ganache:

*If you prefer a stronger cinnamon flavor in your ganache, or simply do not have a cinnamon stick, just bring cream and corn syrup to a simmer, then add the chocolate, vanilla and 1/4 teaspoon ground cinnamon, stirring until chocolate is completely melted and smooth.

*I opted for a thin layer of ganache on my brownies, but if you want a thicker layer, simply double that part of the recipe :)

*Store brownies in the refrigerator. They also freeze beautifully. For a fudgy brownie, serve cold. For a cakier brownie, serve at room temperature. For a great base for a delicious scoop of ice cream, serve warm.

*For super clean cuts, chill in the refrigerator to firm up ganache before cutting.

*The amount of cayenne in the recipe is perfect for just a warming spice flavor. It kind of has the effect of a hot cinnamon candy and was not too strong for my kids. If you are looking for more kick, increase the spice to taste, but do so cautiously.

*You can use natural unsweetened cocoa or dutch process cocoa in this recipe or a mix of cocoas. Different cocoas will produce different flavors.

These are the best brownies I have ever tasted. Don't tell my mom.

Natalie...you're too sweet! I looooooove these brownies, too! The warm spice keeps that amazing chocolate flavor going. I'm obsessed with them. Don't worry. Your secret is safe with me ;)

I feel very passionately about these Mayan brownies. They look perfect, and while I don't always approve of frosting/icing on brownies in this case it looks absolutely perfect.

I'm with you Jessie on the frosting issue. I struggled with the decision to add the ganache...but it's just a thin layer and it was definitely a good move...especially with the cinnamon infused cream. Yum!

I love spices with chocolate - esp a dash of heat - it makes everything better!

These are heaven in edible form. I cannot get over how good they look-- just the frosting has me drooling! MUST try these soon!

Aw thanks, Karly! We loved the added cinnamon and spice. And the ganache, well, it kind of makes everything better, right?

These look super yummy! My husband loves the chocolate/chili combo, so these would be a great treat to make for him! Thanks for a great Cinco de mayo recipe.

You're welcome, Cyndi! We really loved these brownies. The warm spices stay on your palate even after you've finished eating the brownie.