I’ve been on the hunt for a perfect brownie for awhile now. 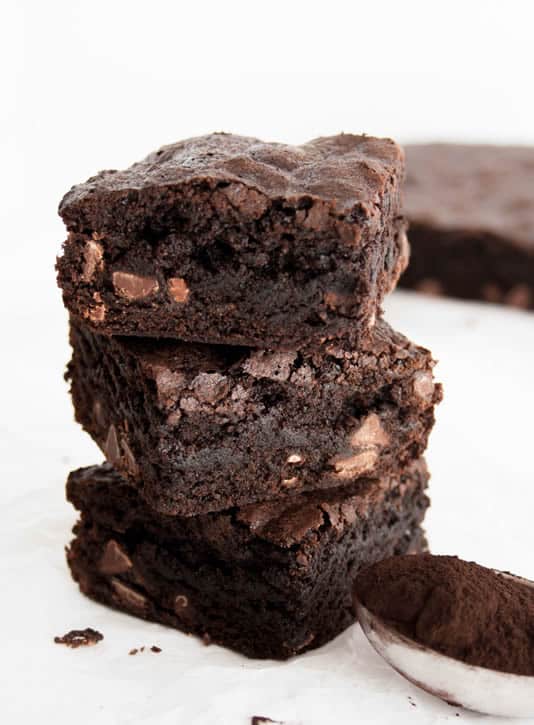 Black Cocoa Brownies were the last ones I was experimenting with when we all cried, “uncle!” and stopped the brownie madness.  The brownie madness was a period of brownie testing I went through, searching for the secret to the perfect cakey, chewy, fudgy texture.

This all happened well before the blog, otherwise I would have documented the whole process for you.

I used to always make brownies from a box and quite frankly, I still keep a box in the pantry for those times when I just want to mix something up quickly. But, I prefer baking from scratch, choosing my own ingredients and having the flexibility to change a recipe to suit my tastes on a given day.

So, my goal was to find or create the recipe for the most amazing scratch brownie.  Turns out, it’s not the easiest thing to achieve. 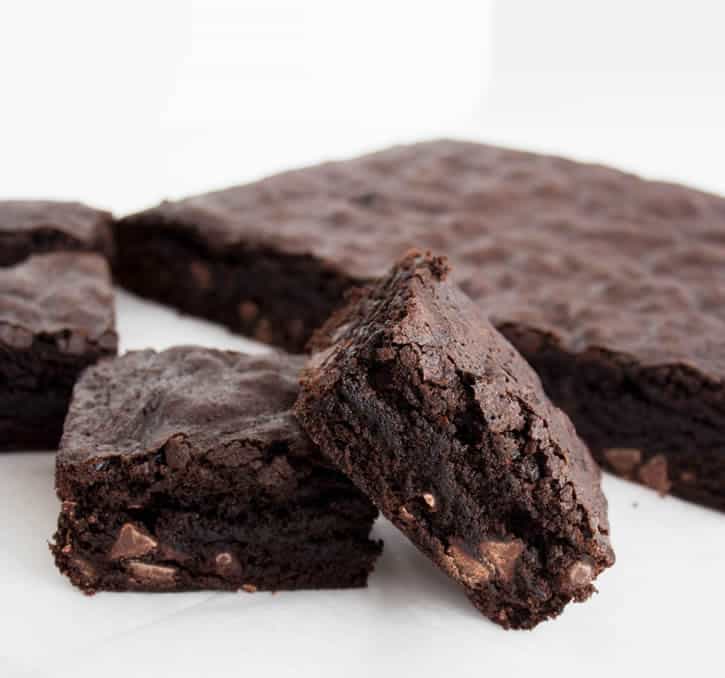 First, I tried lots of different types of brownie recipes to decide if one kind or another would get me closest to brownie nirvana.  I tried brownies made with just cocoa, just melted chocolate or a mixture of both.

I tried them with butter, with oil, more eggs, less eggs, extra yolks, bread flour and all purpose flour.  Of course, chocolate is one of the most important ingredients and good chocolate matters in a good brownie.

I tried different chocolates melted into the batters and different cocoas. Each batch had a number and we rated them on flavor, texture and appearance.

I began to fill my freezer with the different batches so we could test one brownie against another because it was becoming difficult to remember all the nuances of each brownie. 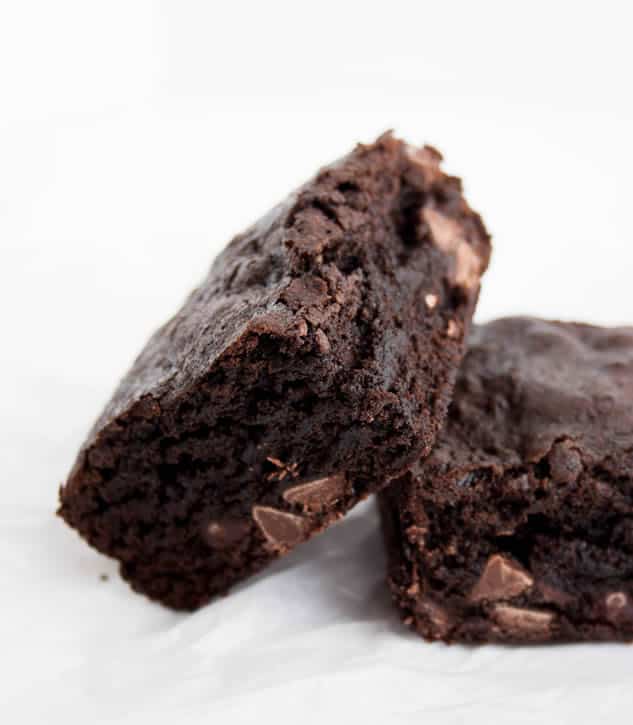 Yes.  Brownie madness indeed.  At some point, we had just had enough brownies.  It’s possible, you know, that no matter how much you love brownies, you can have too much of a good thing.

Even though our taste tests were bite sized, we had had enough and the fun was waning. So, with a freezer full of carefully numbered batches of brownies, I put the search on hold.  Here’s some of what I learned: 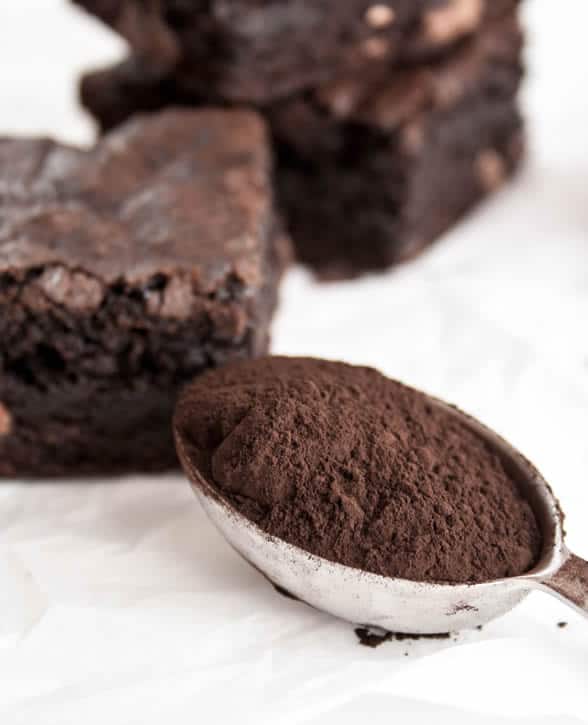 I’ll save all of the other more specific insights for the post where I actually nail my elusive brownie recipe.  But let’s get back to the cocoa and this recipe.  Even though I haven’t settled on the final brownie recipe, I did find one that I fell in LOVE with.

This black cocoa brownie is to die for.  I’ve mentioned in other posts that I have at least 5 kinds of cocoa in my pantry at any time.  It’s because of this brownie odyssey that I have so many.  Black cocoa is a dutch process cocoa that has a rich deep, dark flavor.

I love the color that it imparts, but I adore the flavor you get with this cocoa.  Normally you use black cocoa in combination with a regular dutch cocoa powder and since I have black cocoa and a hundred others in my pantry, I do that often.

For this recipe, however, I used King Arthur Flour’s Double Dutch Dark Cocoa that’s already got the black cocoa mixed in at a perfect proportion. If you’re a baking geek and want to know more about different kinds of cocoa, click this link. (I don’t currently have any affiliation with these brands, but I am a huge fan of these products.) 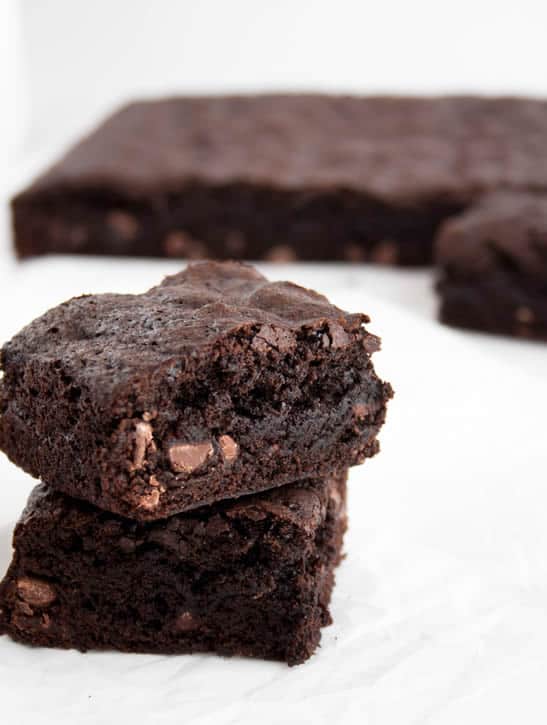 This was my favorite flavor brownie of all the ones that I tried.  It was definitely the one that beckoned me for seconds more so than any other.

It’s deep chocolate flavor is rich and dark without any hint of bitterness.  Why didn’t my search end with this brownie?  It’s got a lovely cakey, yet slightly fudgy texture.

They’re so so good….but I would like them to be chewier.  And that’s what I’ll be working on when I drop back into brownie madness again.  Until then, this is my current favorite, and I say that confidently, after much testing.

Oh, the other thing I learned?  I don’t think there’s going to be just one ultimate brownie. (I know, shocking, right?)  I think there’s room for more.  But I wouldn’t bother sharing this one with you, unless it was one of the best. 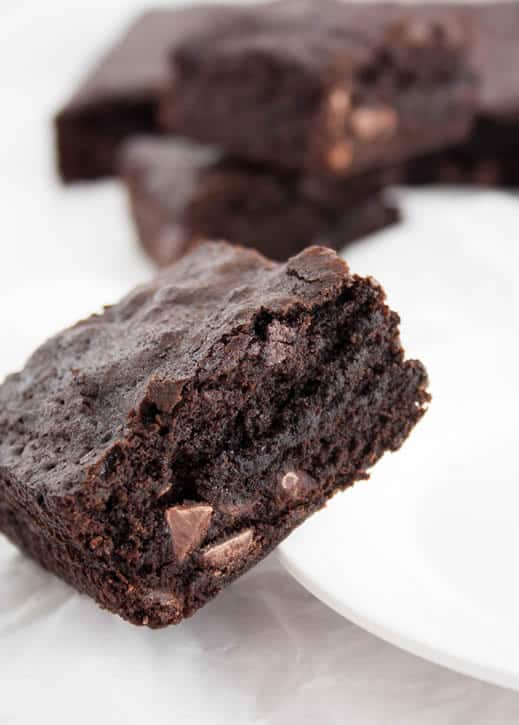 Stay tuned.  I’m sure there’s going to be plenty of brownie love to go around :)

* Brownies keep for at least three days in an airtight container at room temperature. They always taste the best on the second day. They also freeze well.

*Adding the chips with the dry ingredients helps keep the chips from sinking to the bottom. I was in cookie mode when I made these and added the chips at the end. You'll see in the pics that my chips sank. (They were still amazing, but next time I need to remember to do that step.)

*You can substitute your favorite unsweetened cocoa in this recipe, but this particular cocoa is what makes this brownie my favorite. Expect that other cocoas will alter the taste. It will still be good, but it will be different.

Do you think these would work in a cast iron muffin pan molded to look like cats? I have had problems in the past with some recipes not coming out of the pan well, and crumbling. Thin batters don't seem to do well. I'm trying to make black cats for Halloween.

@Ramona, I tried the brownies and they popped out perfectly, and were really black and tasty! I omitted the chips so as not to interfere with the mold. I used a "magic release formula" I found online to grease the pan. It works where spray-on oils fail miserably, as long as the batter isn't too thin. The formula is equal parts butter, vegetable oil, and cocoa powder. Use flour instead of cocoa for light colored recipes. A tablespoon of each was enough for me. I made a mix and liberally painted it on the cast iron mold with a paintbrush. It's a bit time consuming, but worth the effort. So now the challenge is leaving the black cat brownies in the freezer till Halloween! Thank you, happy Halloween!

@Ramona, Thank you for the tips! If I decide to chance it, I'll let you know the results!

Hi Linda, I think you're going to have to test it out to be certain. I have made brownies in mini cast iron skillets that have turned out quite well, so I think you definitely have a good chance that it would work. I think it can be difficult with molded pans especially if there's small details. You have to make sure there's absolutely no residual cooked on batter from previous bakings. Also, remember that part of getting some baked goods out of a pan is timing. If the baked good is too hot, it can be soft and difficult to get out of the pan in one piece. If it's too cold, it can stick. I would probably let them cool for about 10 minutes (possibly longer because it's cast iron) and then try to turn them out. Basically, you want them to have firmed up a bit but still be warm. I hope it works out for you. Sounds like a fun and delicious idea!

I made these brownies today. I think these are the perfect brownie...not too fudgy and not too cakey. I baked them in an 8" pan and added walnuts. They were delicious! Thank you for the recipe!

Julie, you're welcome! I'm happy to hear they were a success!

Thanks for sharing the recipe! I had some Black Cocoa powder sitting around and was searching for recipes to use it up and this one was perfect; they turned out so well! The only personal 'change' I made was to use dairy-free choc. chips and AP flour as it was all I had on hand.

Shanese, you're welcome! I love this brownie recipe and black cocoa, as you already know, really adds an amazing deep chocolate flavor. If you have any brownies left over, their flavor will continue to get richer and deeper on days 2 and 3 making them even more delicious :) Thanks for stopping by to share your success.

How can I make a great brownie without eggs??

Rachel, I haven't tested any egg free brownies. You'd have to do a search and see which recipes sound like your version of a great brownie. Some like chewy, some like fudgy and some like cakey. I do, however, have an egg free chocolate cake that might hold you over until you find your perfect eggless brownie recipe :)

Just bought a bag of the King Arthur black cocoa and LOVED it in a chocolate cake recipe. Wondering how much of regular cocoa and blackcocoa to mix since I have just the pure black cocoa and not the double dutch dark cocoa you used that is already pre-mixed. Can't wait to try these!

Tania, I'm so excited you decided to try the black cocoa! It seriously makes a difference, doesn't it? I don't know what ratios they use in the double dutch, but this is what I would do...First, use dutch process cocoa for you base cocoa. Then, I would substitute 2 (or 3 Tablespoons) of the dutch for the black. The easiest way to measure that out is to put the black cocoa in the measuring cup first and then just finish filling it with the dutch process cocoa. You'll find that a little bit of black cocoa goes a long way. The other choice is to check out the link in the post that takes you back to King Arthur's ABC's of cocoa. You'll see all of the colors of their cocoa there. You'll see that double dutch is not nearly as dark as you might think based on how black the brownies turn out with it. You could try to mix your black and dutch cocoas to get a similar color and then keep a larger batch of your mixed cocoa to measure from in the future. I don't think you'll go wrong whatever you do and I think you'll love these brownies. I LOVE the dark, rich color and flavor. And you will find that the flavor gets better a couple of days after baking...if they last that long :)