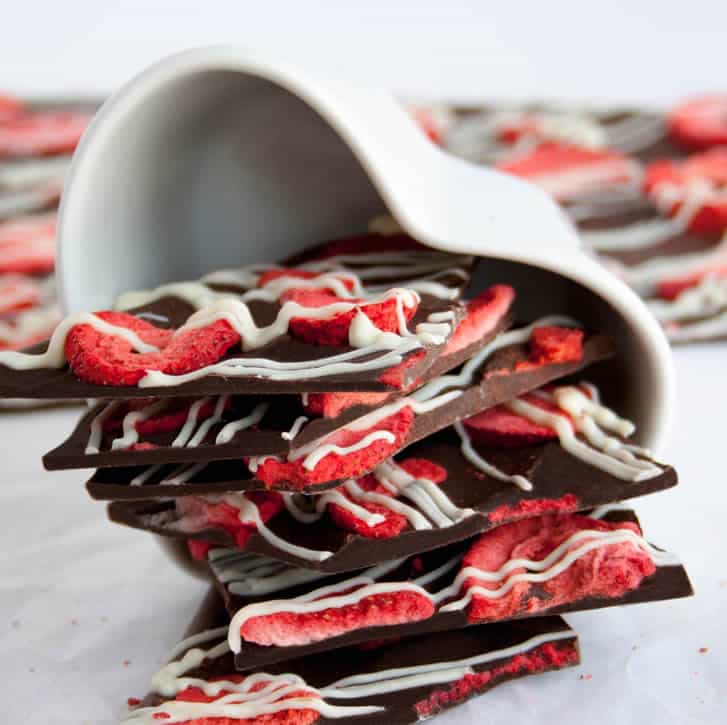 Strawberry Chocolate Bark.  Instead of chocolate covered strawberries, we have strawberry covered chocolate.  How cool is that?  I’d like to say that I thought of this idea myself, but I actually saw it in Food Network Magazine.  I was inspired and I wanted to share it with you in case you didn’t see it for yourself.  (See? I’ve got your back :) 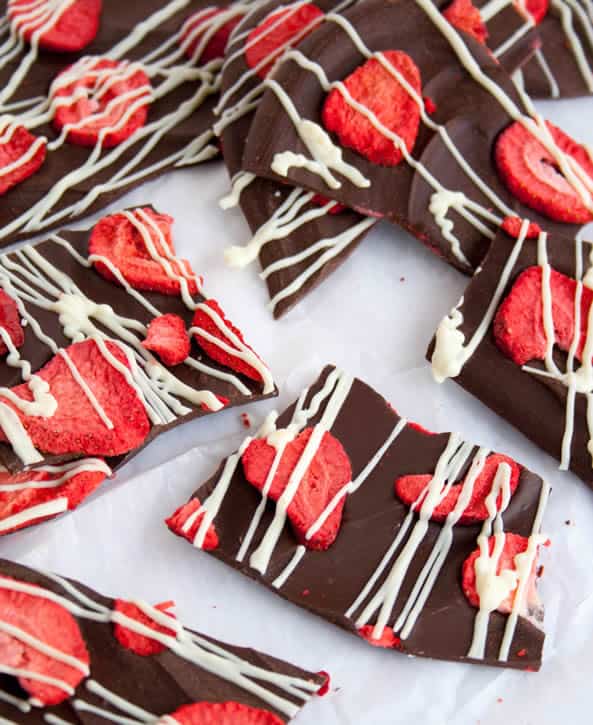 It’s also the week of Valentine’s Day and it’s all strawberry, cream and chocolate this week in my kitchen.  I didn’t exactly plan it that way.  My editorial calendar had some other things on it that will either get moved aside or moved out.  I did follow the plan for some recent posts…Whipped Cream Cream Cheese Frosting, then Strawberry Cake with that amazing frosting…and had then planned to post a cookie or breakfast treat but made a quick U-turn and decided on yet another strawberry confection… 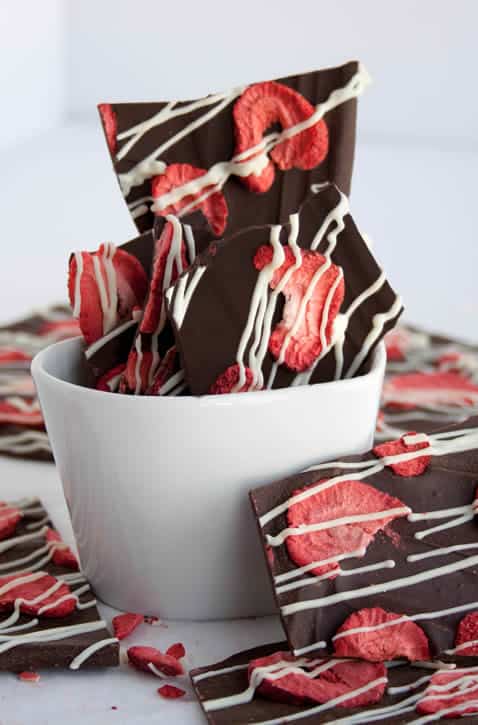 Freeze dried strawberries are the fruit gracing this thin chocolate slab of yum.  Who would have thought? Freeze dried strawberries.  I’ve seen them.  I’ve tried them. I kind of categorized them as a cereal topper and left them there.  Since we don’t eat lots of cereal, I rarely pick them up, unless someone spies them as a potential snack and throws it in the cart.  So when I saw it as a topping for chocolate bark?  No brainer.  Throw it in the cart.  Go home and melt some chocolate. 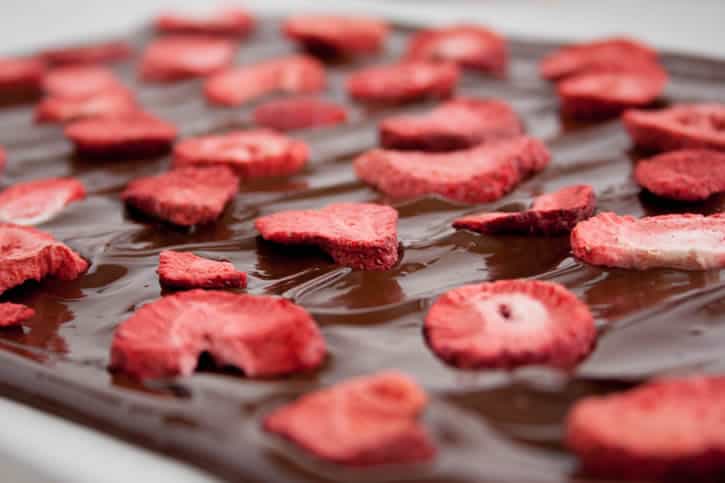 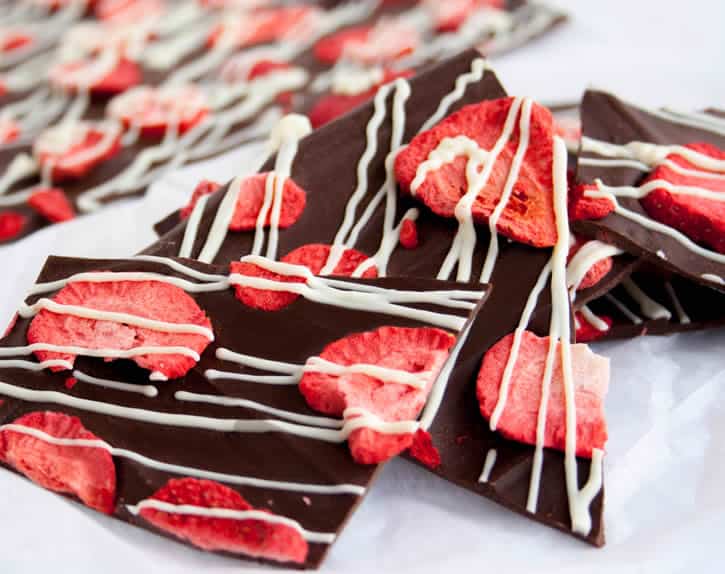 The berries are sliced as thin as the chocolate and you know what’s really cool?  When you break the bark into pieces, the berries break with it because they are crispy. I think this is the prettiest bark I’ve ever made.  You get strawberries and cream and chocolate in every bite. 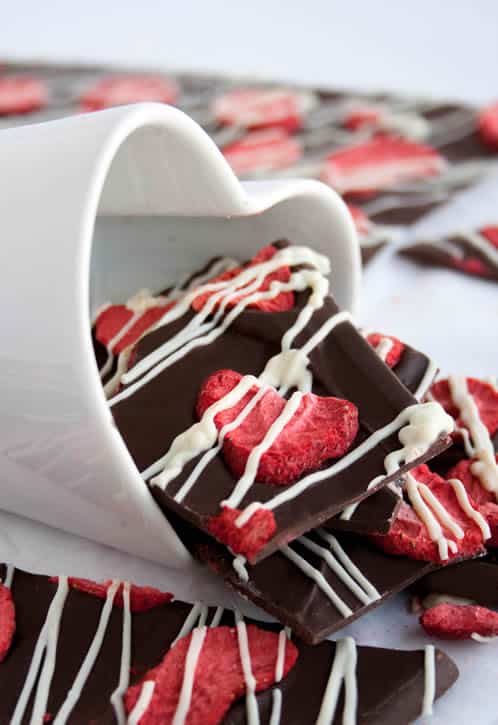 What valentine wouldn’t love that?

*I found the freeze dried strawberries at Trader Joe's.

*Why go through all the tempering of the chocolate? It will insure your bark is shiny and snaps when it sets up. If your chocolate doesn't set up well or has a white haze, it hasn't been tempered properly. You can try to skip taking any temperatures and just go with melting the first 3/4 of chocolate thoroughly and then adding the chunks of the remaining chocolate, stirring until it's completely melted.

Found the freeze dried strawberries to be a weird texture and not as prominent a flavor as I expected. The freeze dried raspberry flavor seems much more prominent and better to hold its own for this type of thing.

Alyssa, after working with a bunch of different freeze dried fruits for different applications, I agree that the raspberry flavor is much more prominent than the strawberries and would make a great match for the chocolate. I use the raspberries for flavoring other recipes like these Raspberry Valentine Sugar Cookies.

You've Never Seen Chocolate Bark Quite Like This - YUM! - FunnyModo - Funny Stories On The Net

[…] 6. Tell someone how much you love them with strawberry chocolate bark. […]

This is beautiful!! And I'd eat it ALL.

So, so, so pretty! Now I know what to do with all those freeze dried strawberries I bought in bulk a month or so ago. I love this, Ramona!

Thanks, Mel! Everything is better with chocolate, right?

This is stunning! Thanks for sharing...I wouldn't have known it existed otherwise!