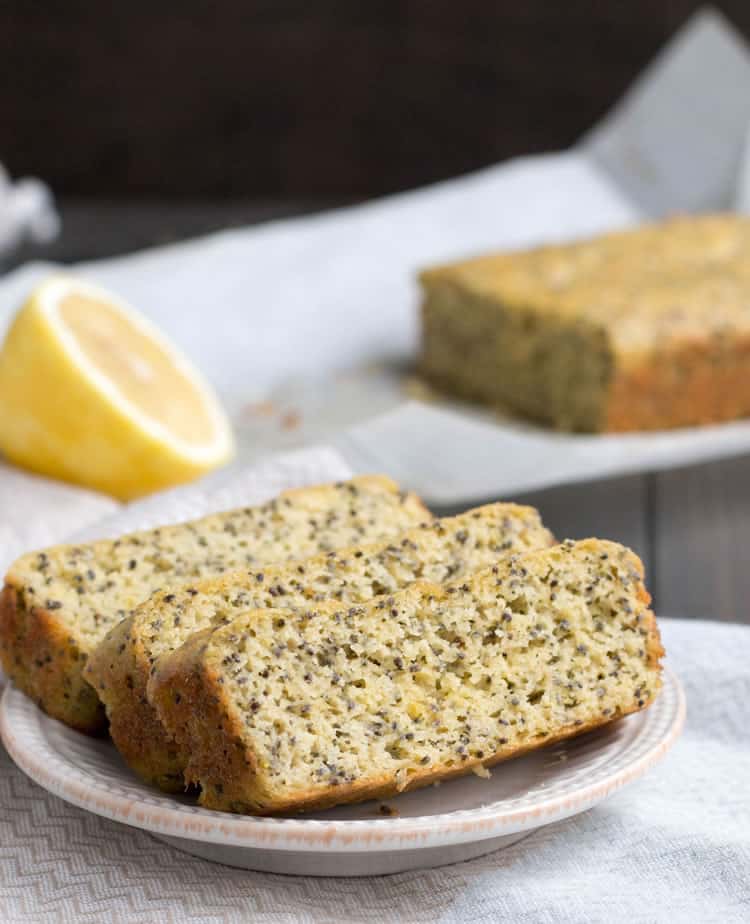 Oh wait….you’re not looking for gluten free, low carb, fluffy, protein rich bread? Ok…then, let me direct you to some muffins, biscuits, cookies, or cake! Everyone else? Let’s dive in to this bread!

I don’t normally seek out gluten free recipes. If it happens in my kitchen, it happens naturally. Low carb and protein rich is cool, though.

This particular recipe came to me by way of my sister. I have sisters that love to bake. But this sister, not so much.

I mean, she bakes…she just doesn’t bake often and really, she’s just not into dealing with all of the details, precision and steps that many baking recipes require.

She’s the sister that doesn’t suffer complicated food preparation. She has great taste, but likes good food made simply. I can’t argue with that.

But, imagine my surprise when she sent me a photo of this bread. The text said, “I just made something yummy!” And it was something in the baked goods category. (Huh! How about that?) 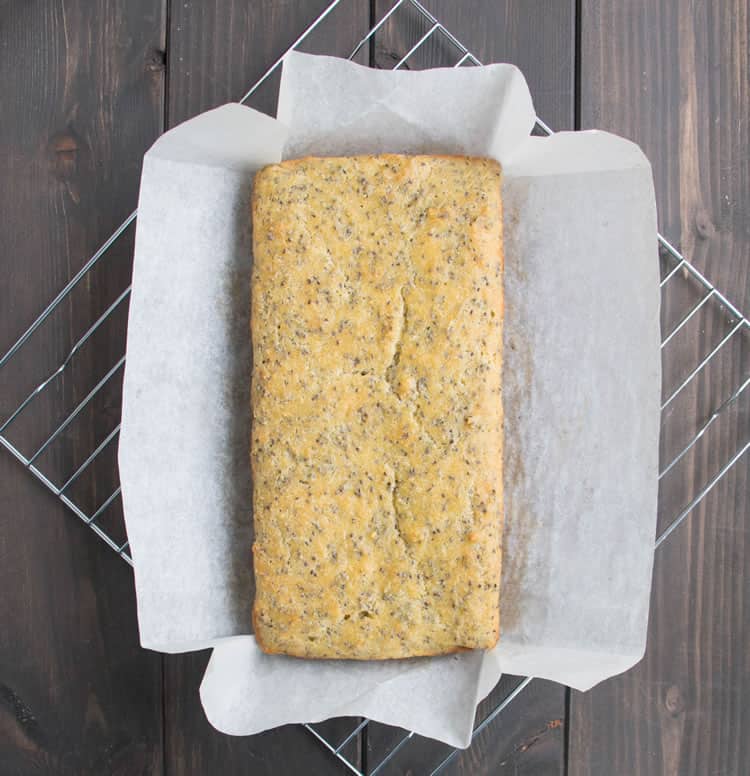 I called her and found out she created something…something yummy. It was this bread. She was excited to tell me all about it.

“It’s fluffy and nutty and yummy. And, it’s low carb and full of protein! Oh, and it’s filling,” she said. (Really? I thought. Sounds interesting!)

She was looking for something bread-like but she wanted to use almond flour. So, she looked at some recipes to get an idea and then just started adding what she had available.

Turns out, I had all of the ingredients on hand…even the almond flour. (It had been waiting patiently in the pantry for me to make macarons, but I never seemed to be in the mood. I still plan to make them someday. No promises on timeline, but it’s on my list.) 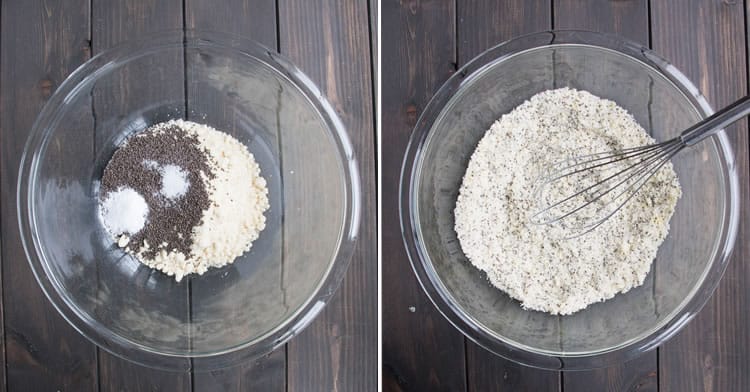 I told her to send me the recipe….

So…. you know how I can write a thousand words without blinking? And how I try to give as much detail in every step of my recipes?

Oh, and how I write recipe notes like they’re going out of style, just in case you need even more detail?

The whole darn recipe was 49 words. Seriously. Short and sweet. 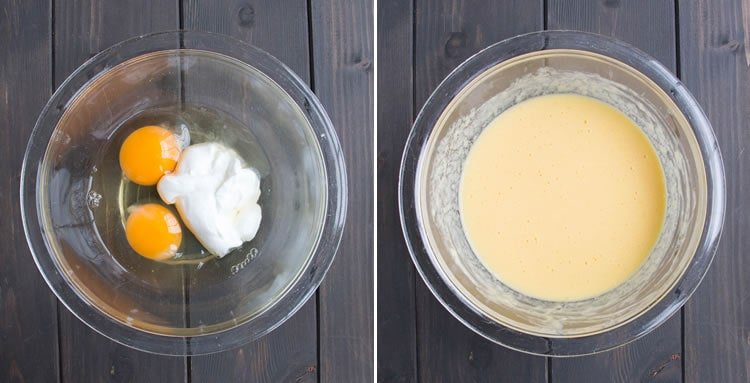 So, even though I write detailed directions in my recipes with lots of notes, I do so to try to insure your success. Since I can’t be in your kitchen, I try to think of questions you might have or variations you might want to make.

I try to answer your questions before you have to ask them.

But when I’m reading a recipe? There’s something about short and sweet that makes me feel like I could whip up the recipe right now, in just a matter of minutes.

There’s a good reason why I feel that way…especially when we’re talking about a recipe my sister develops. It’s because her recipes always come together in a matter of minutes. This one was no different.

So, I got out “Bowl 1.” I whisked my dry ingredients together.

I whisked my wet ingredients in “Bowl 2.” Then, I combined them as stated in her directions.

Now, I decided to only make a 1/2 recipe. I wasn’t sure if it would be a hit with my family and didn’t want to end up with too much bread, low carb or otherwise.

So, I’m sharing my 1/2 recipe with you. That’s why I have a short loaf. I actually think the short slices are kind of cute. Consider them portion control :) 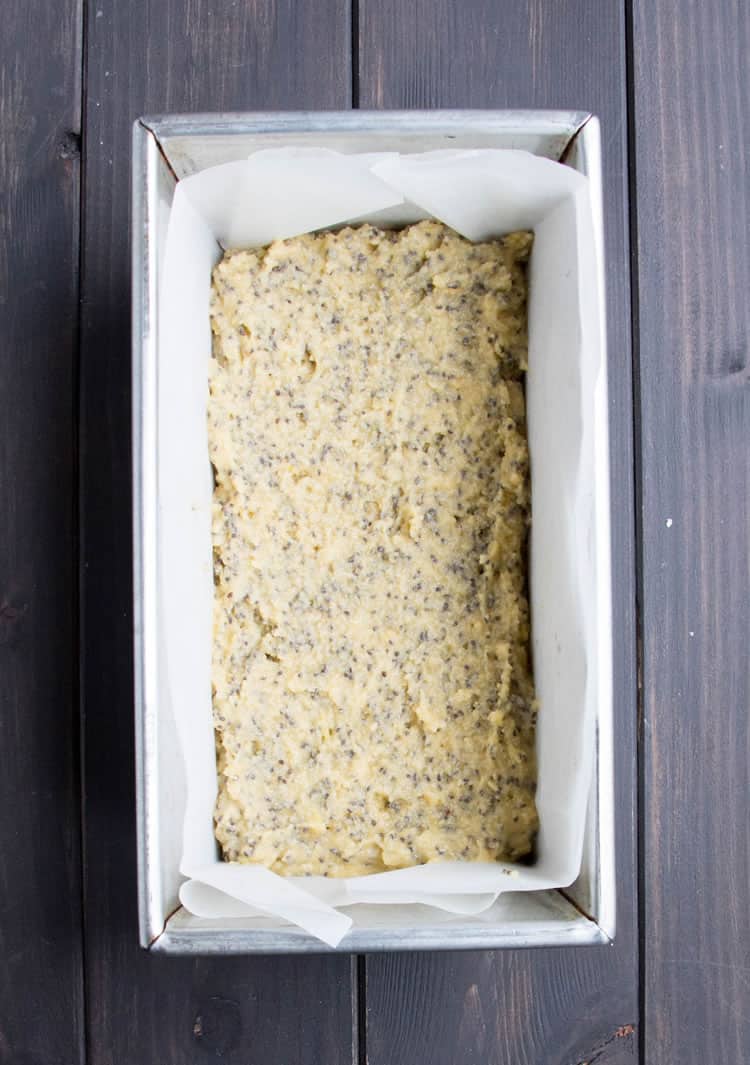 It didn’t look like much in the pan, but when it was baked? It rose and became this fluffy, nutty bread! (I know, I know. She told me it was nutty and fluffy, but somehow, I was still surprised.)

Of course, I called her and gave her back all the same positive feedback she had given me. I used the exact same words, to which she responded, “I know. Right?”

Everyone in my family really enjoyed it. We had it with soup and salad and it was a nice hearty accompaniment.

And then, my brain went to all of the potential variations we could make on the bread. It was funny because I kept coming up with sweet ideas and basically turning it into cake. Not bad ideas, but every variation I came up with added carbs or more fat. No bueno. 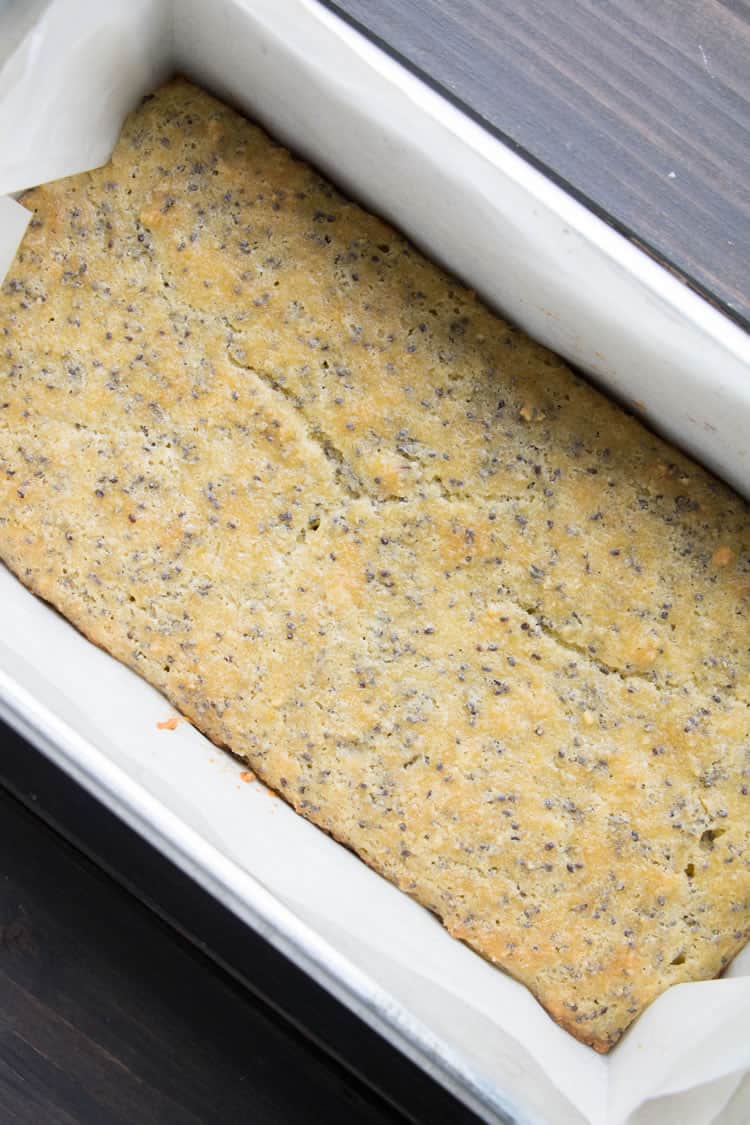 The problem was it looked like lemon poppy seed bread. (It’s the baker in me :) So, every time I bit into it, I was expecting sweet. It kind of messed with my mind a bit.

So, when I made the recipe again, I adjusted some of the ingredients. I reduced the salt and cut the amount of chia seeds in half.

Then, I added the zest of a lemon. I stopped short of making it sweet. But, I really, really wanted the hit of lemon in it. My brain was calling for it. 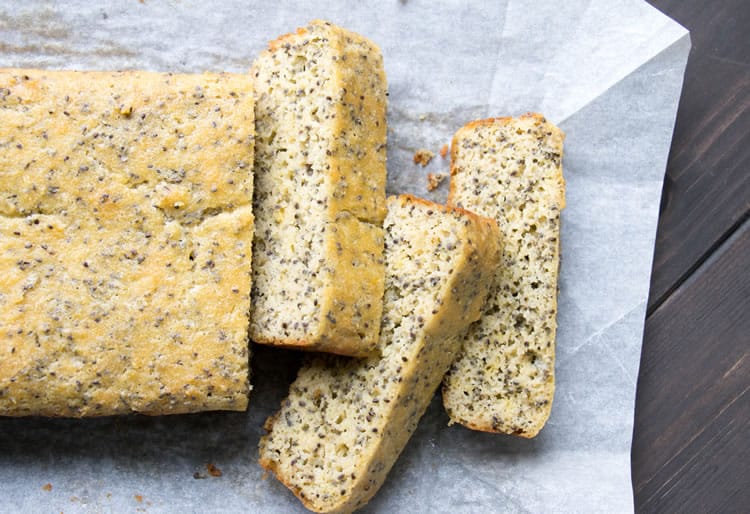 So, now I had a savory Lemon Almond Chia Bread. Delish! A fun and satisfying alternative to a carby bread.

My friend’s mother recently had to significantly reduce her carbs. So, I made her a little loaf. She loved it! She was really missing carbs and this bread filled the gap for her. 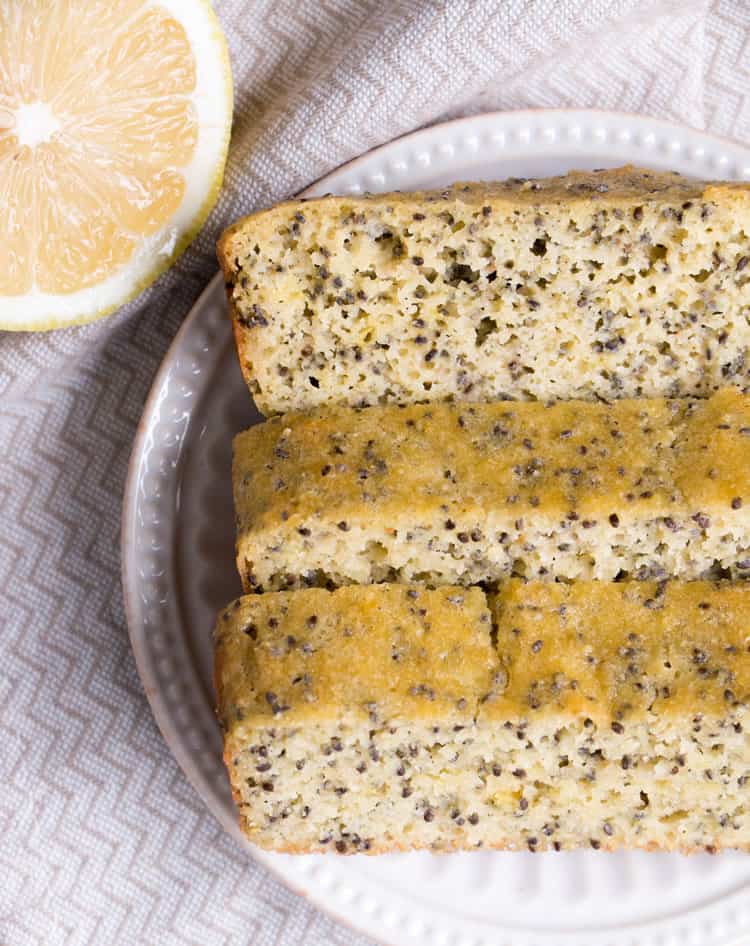 And, because my brain was still on sweet…I tried a bite with a dusting of powdered sugar. I know. Sacrilege, but I had to try it. Yep, now I was tasting the sweet lemon flavor my brain was telling me it “saw.”

But that was just for fun. (Though I will give you a few tips in my recipe notes, if you want just a hint of sweetness :)

The savory version is a perfect addition to a salad, soup or meal. It’s great for a snack or for breakfast. And, it’s filling. You wouldn’t want to sit down and eat a whole loaf, no matter how “fluffy” it seems. 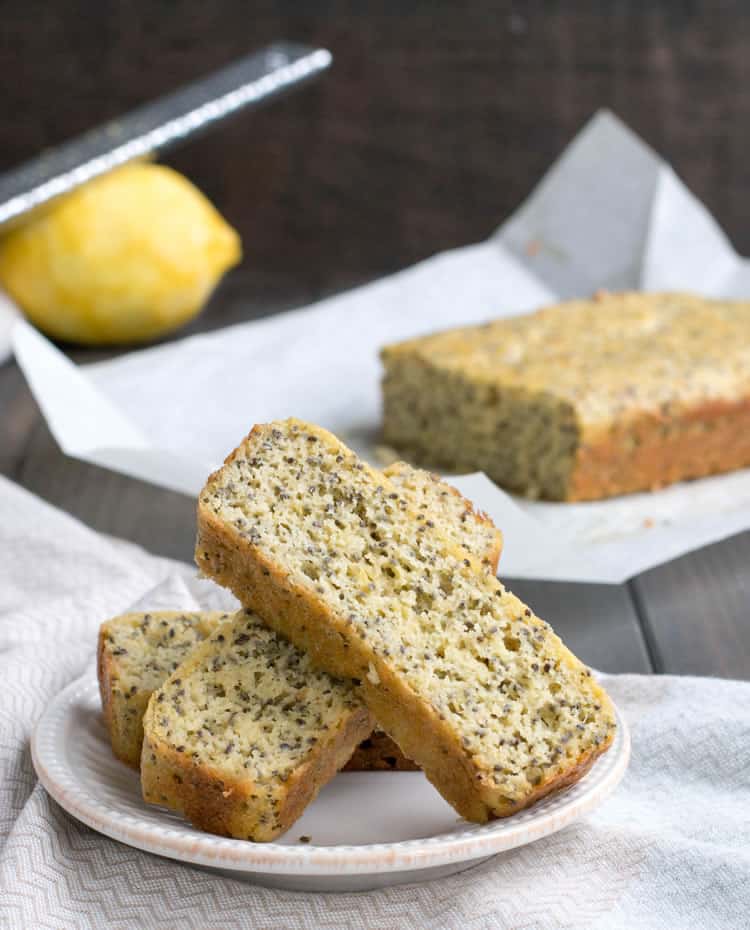 *This makes a small batch or a short loaf of savory bread. If you'd like to make a larger batch, double the recipe. You can bake it in a loaf pan, but you'll have to increase the baking time. I don't have an exact time to give you. Generally, when baking a loaf of quick bread, baking time can be anywhere from 50-65 minutes. I would check it at 40 minutes and adjust time from there.

*You could also bake a double batch in an 8" or 9" round or square pan. Baking time will probably be around 30 minutes. Check doneness at 20 and adjust for additional time from there.

*If you prefer a little sweetness to savory, without completely negating the low carb nature of the bread, or adding sweetener to the batter, you could eat your slice with jam or drizzle a bit of honey on it. You could also dust the top with confectioner's sugar or lightly drizzle with lemon icing by mixing 1/4 cup of confectioner's sugar with just enough fresh lemon juice to create a drizzling consistency. This won't make a lot of icing, but enough to just enough to very, very lightly drizzle over the top of the loaf.

*I used butter because that was the fat used in the original recipe. However, I would like to try it with olive oil. I think it will work just as well. If using olive oil, I'd probably add just a bit more salt to replace the salt from the butter.

Adapted from my sister's original recipe.

Omg... It is so delicious I just make it cannot stop thinking I'm gonna make big batches next time.

Aisha! I'm thrilled to hear you enjoyed it!

Has anyone tried this without eggs and use vegan egg instead?

Hi, Lil! This recipe relies pretty heavily on eggs. Maybe another reader can weigh in with their own experience. That being said, I have seen other almond flour chia breads that are vegan, but you'd probably have to experiment a bit if you wanted to revise this one.

Would this recipe work with blueberries in it? Thanks.

Hi Michelle, I think it would. Just a reminder, in case you didn't read the whole post, this isn't a sweet bread like a quick bread. Because there's no added sugar, it's really more on the savory side. I did dust some pieces with confectioner's sugar to get that sweeter flavor when I was in the mood. The blueberries would likely add a nice bit of sweetness to it. If you use frozen, make sure you mix in the berries while they are still frozen.

Ok to use all purpose flour in place of almond flour?

Lori, I don't know if you can make a 1:1 substitution here. All purpose flour reacts differently than almond flour. You may need to increase the amount of all purpose flour or reduce the liquid in the recipe. You can certainly experiment, but because I haven't tried it myself, I'm not sure if you'll be pleased with the results. Here's a link to lemon chia bread from Bob's Red Mill that might be closer to what you're looking for.

Wasn’t what I was expecting, it actually tastes really good. Definitely will be making this again.

Haha! Millie...when I started reading your comment, I thought, "Uh oh!" Now I'm just laughing about the it "actually" tastes really good :) I'm glad to hear that the recipe exceeded your expectations.