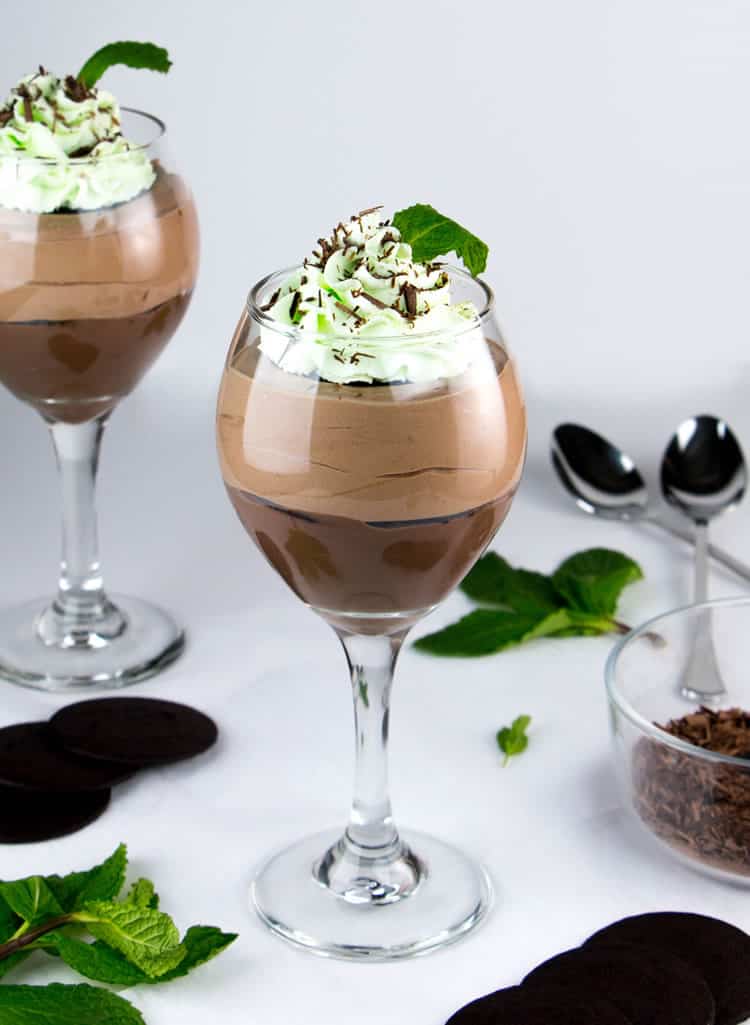 I don’t think I’ve posted anything green yet for that holiday. My favorite thing to make for St. Patrick’s Day is Irish Soda Bread. LOVE it!

Love it so much that I made Irish Soda Bread Scones. And you know how much I love scones, so Irish soda bread PLUS scones?!? Winning!

I’ve also made Chocolate Stout Cupcakes filled with Irish Cream. To die for! And, then there’s Chocolate Stout Cake Crumb Truffles. Those are a by product of having cake crumbs and ganache left over from the cupcakes. So you get a two for one!

Oh, and continuing with the Irish cream theme, I’ve also made Cookies and Irish Cream Cheesecake Pie. That was another hit. (Of course, it’s cheesecake. What’s not to like?)

So what about today’s post? This whole thing started with a recipe in Cook’s Illustrated for Easy Chocolate Pudding.

To be honest, I’m not a huge chocolate pudding fan. Oh, I’ll eat it. I don’t hate it at all, not one bit. But, if given the choice, I think I’d rather have a piece of chocolate cake or a brownie or a cookie.

Chocolate mousse is also fine, though I do find it a bit rich. I like it much better as a filling for chocolate cake. (Do you see a pattern here?) 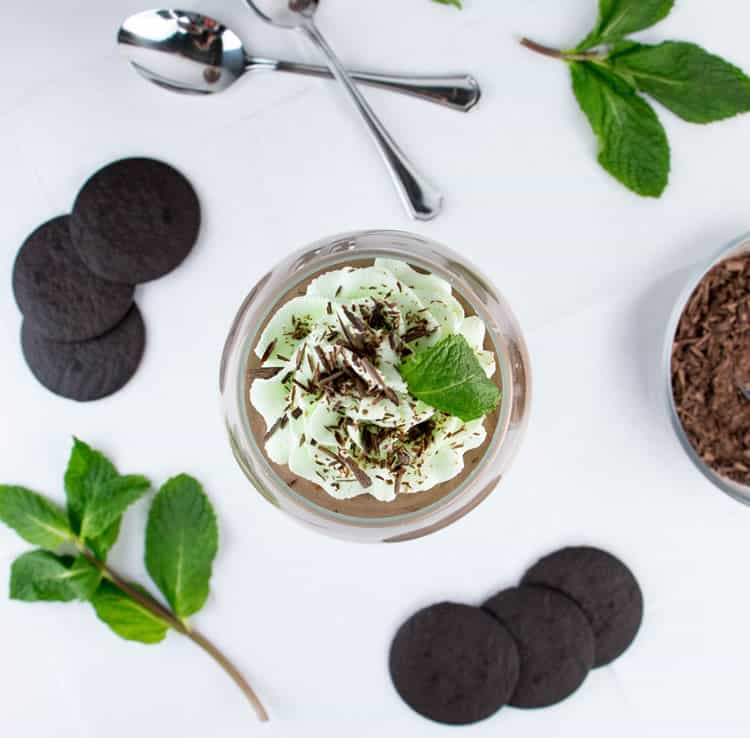 And it’s not really about pudding itself, because I like vanilla pudding…oh, and I LOVE rice pudding! Tapioca is a-ok with me and of course, I give a big thumbs up to the custard family.

And yet, here we are, smack dab in the middle of chocolate pudding land this week. I mentioned that this whole thing started with the pudding recipe in a magazine my sister gave to me as a gift.

But, it actually started with two failed recipes. Yep, I had grand plans for two other ideas, but I needed a lot more time (and patience) to perfect them.

So, I went to work with chocolate pudding. Even though it’s not my number one favorite dessert, I knew it wouldn’t let me down as my other failed recipe creations had.

I suppose I could have used a box mix for pudding, but pudding from scratch is really quite easy. It takes just one pan, on the stove. Mix all the ingredients in and cook until it’s thickened. That’s pretty much it.

My daughter stood next to me and watched me make it. “That’s it? Just stir it together and cook it?” Yep. That’s it.

Of course, once you pour it into a bowl, you do have press a piece of plastic wrap on top. Why? Because if you don’t, a skin will form on top. 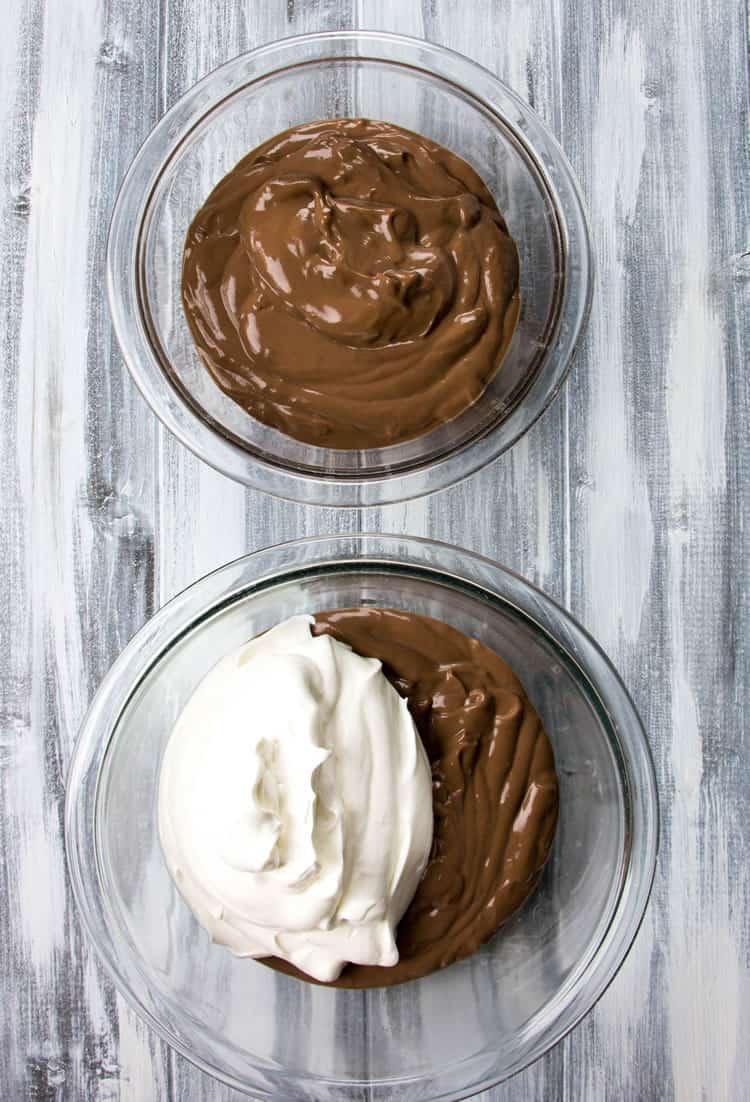 Ready for this? I like that darn skin on top. I liked it as a kid. I like it as an adult. I think I like it better than the pudding itself.

Oh, and I just found out that my husband likes it too! (Yep, I still have plenty of mystery and intrigue left in my marriage ;)

Alrighty then….clearly, it must be a texture thing for me and chocolate pudding. But, we’re gonna have to skip the skin for this recipe.

In any case, plain ole’ chocolate pudding wasn’t going to cut it for my “creation.” So, I decided to make a parfait.

What would those other things be? Well, for one, I knew I wanted something cakey. I decided to use chocolate wafer cookies. Typically used in famous icebox cakes, they would work perfectly here.

What else? Well, I did want to get some green going, but it was going to have to be minty, not just green. Peppermint whipped cream would top off my creation. Mint Chocolate Pudding Parfaits were slowly coming to life.

I made the chocolate pudding. I tasted it. It was good, but I thought, “Do I really want a whole serving of just that?” Nope. Not gonna work for me.

I knew I was going to have layers, but I wanted more interesting layers. I didn’t want a “one note” parfait. So, I took part of the pudding and divided it among my serving dishes.

Then, I took the rest of it and folded it with whipped cream. Yep, that was working for me. The whipped cream made it less intense and lightened up the texture.

In between those layers were the chocolate wafers. I was conservative on how many constituted a layer. Because I was serving my parfaits in wine glasses, I needed two cookies for my first layer. I just broke them up to make them fit into the space that I had.

Two cookies isn’t that many; I could have added a lot more. After all, I really wanted cake with my pudding, didn’t I?

If it were just me, I probably would have had five cookie layers. Not five cookies stacked, but cookie-pudding-cookie-pudding-etc. But that’s just me making chocolate pudding less pudding-like :) 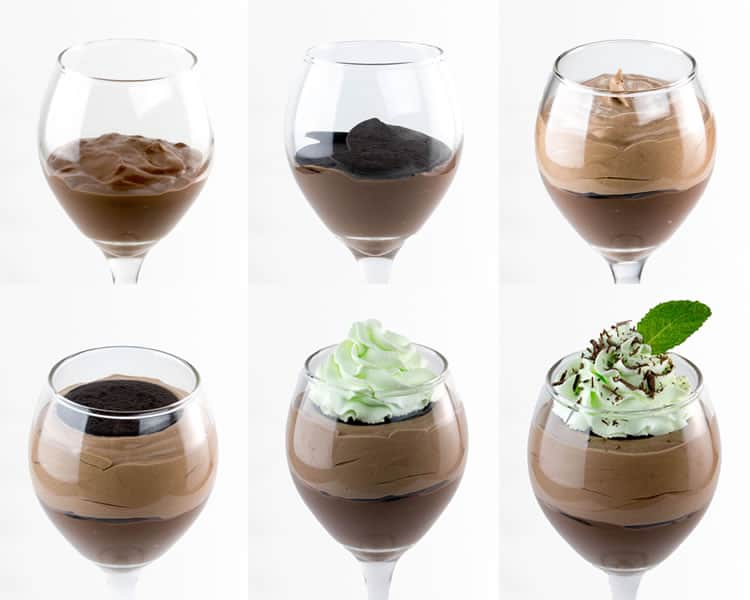 I decided to stay focused and not ruin what should be a more pure pudding experience for all the chocolate pudding lovers out there.

Once the creamy pudding layer was complete, I topped it off with one more cookie.

If you want the cookies to fully soften, you need to make sure that they are completely covered on top and bottom with one of the pudding/cream layers. (They need moisture to soften, so make sure you give it to them.)

Time to make the mint portion of my Mint Chocolate Pudding parfaits. I had already planned peppermint whipped cream.

I had also considered adding mint to the pudding, but I really didn’t want mint chocolate pudding. I wanted layers of flavor, not just one flavor throughout.

The peppermint whipped cream was perfect! And it was green! Check and check. 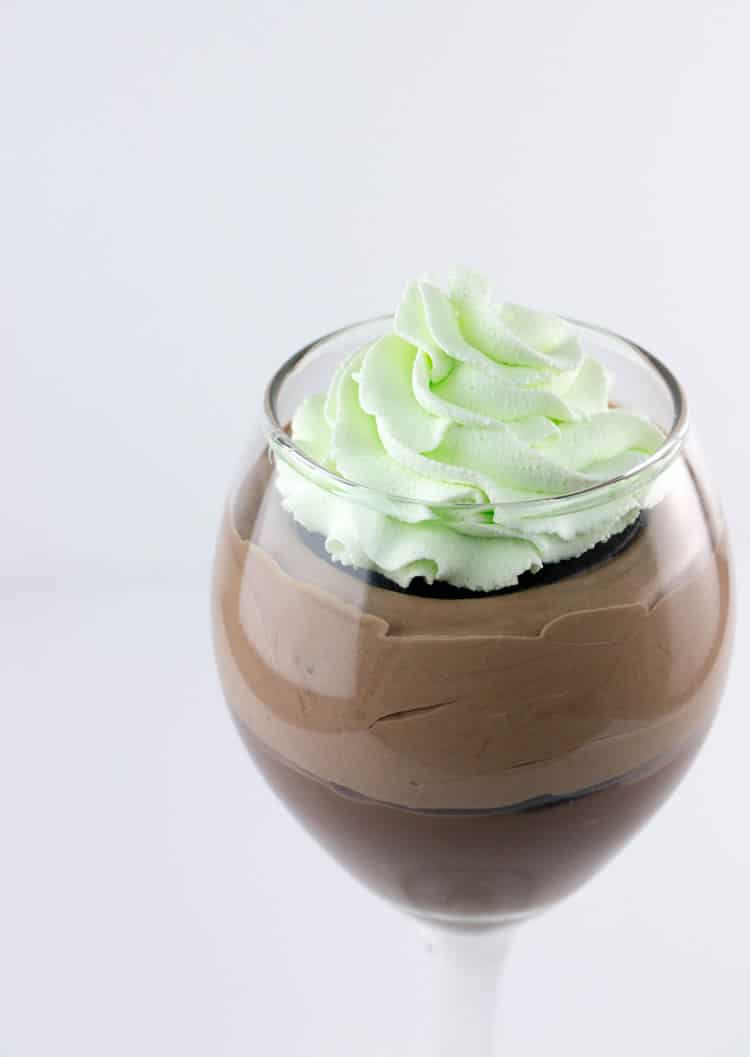 Here’s the thing. I wanted a soft dollop of the whipped cream for the top of my parfait. I did not want to pipe it.

But…I took a short cut and whipped all of the cream at once. I had a beautiful bowl of softly peaked whipped cream to fold into my pudding for my second layer. I used half of it for that.

Then, I wondered if I could mix in the peppermint and food coloring to the remaining whipped cream without creating stiff peaks. But, I used my electric beater instead of just trying to achieve it through folding.

Spoiler alert! I ended up with stiff peaks and if I beat it any further, I was bound to end up with butter. My parfait topping would have to be piped because I was not into whipping up another bowl of cream. 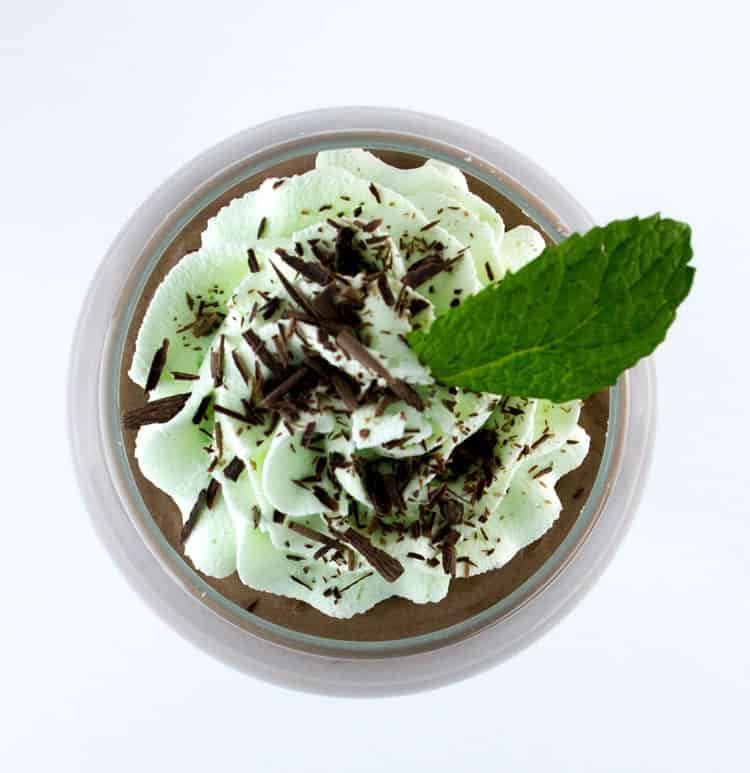 I’m not even sure the folding would have worked since it’s hard to get even color by folding…and then you have to make sure you’re not deflating the cream by too much stirring.

So, for the recipe, I divided it into two steps. You don’t have to dirty a second bowl, but you’ll have better results if you whip one batch and then whip the other.

I think this is the way to go even if you do want to pipe it at the end. You’ll simply have more control.

Dollop or pipe your minty cream on top of that last cookie and stash the dessert in the fridge. The cookies need time to soften into their cake-like selves. 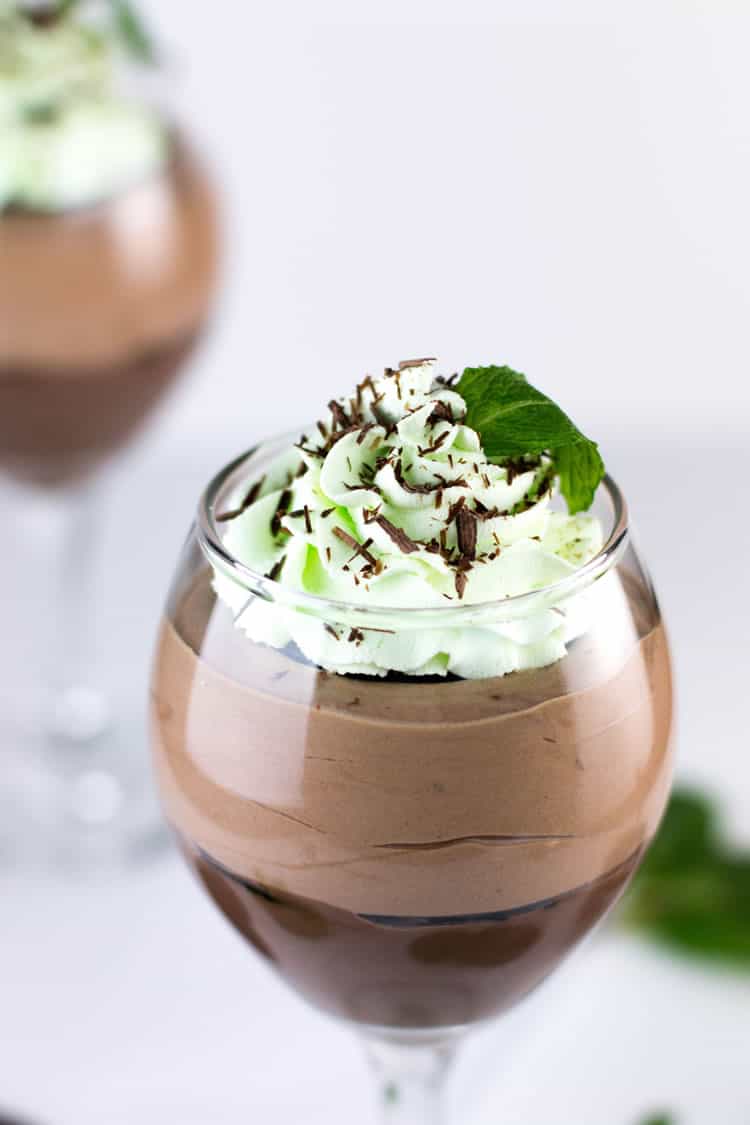 Because there are two chilling periods, you need to plan ahead. This is a “make it the day before” dessert.

Make ahead desserts are great. When it’s time for dessert the next day, it almost feels like someone else made dessert for me.

When it’s time to serve, just sprinkle some chocolate shavings or chips on top. And, if you want to get fancy, stick a fresh mint leaf in at a jaunty angle to add some color. It’s also a good shout out to the mint that lies beneath it.

Mint Chocolate Pudding Parfaits. Yep, chocolate pudding just got a little more exciting for me. When I served it for dessert, I had no plans to eat the whole thing.

My plan was to either save the rest for later or maybe someone else would want more. I took a bite. And then another. I made sure every bite included some of the minty whipped cream. The combo of the layers was so good and definitely better than any individual layer alone. Before I knew it, it was gone.

Do I have a new found love for chocolate pudding? I don’t know. Maybe. Serve it to me in lots of layers with cookies and whipped cream. Then, give me a spoon and I’ll promise… 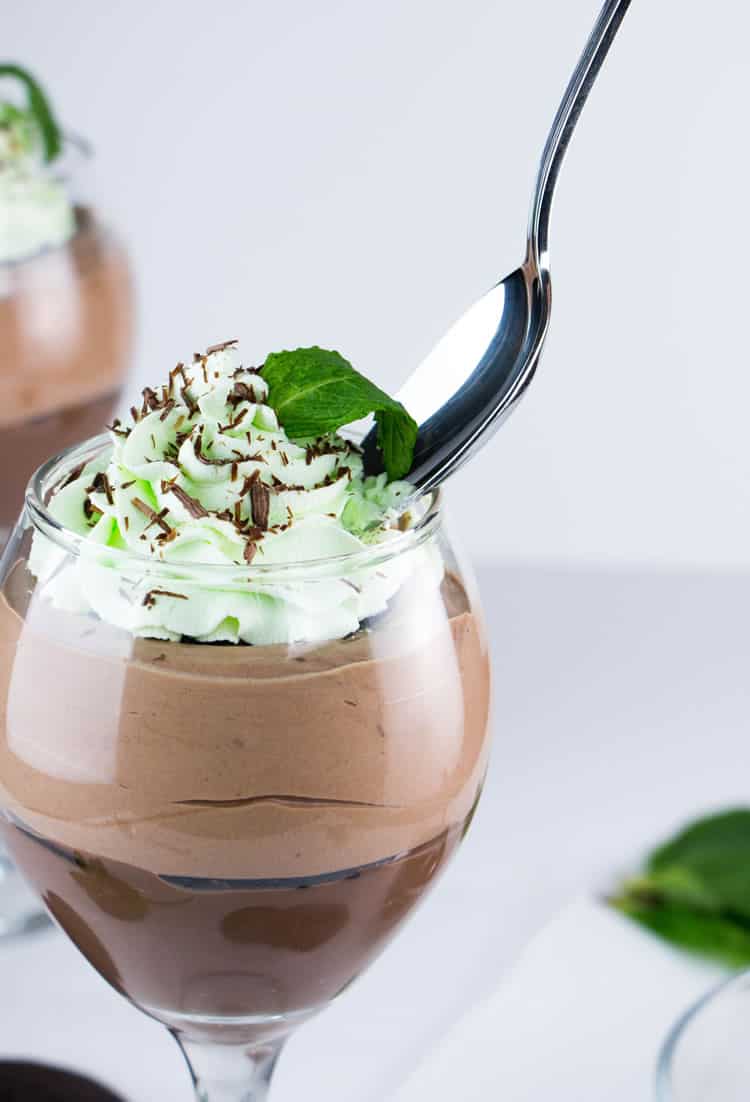 For the base pudding:

*I used Nabisco's Famous Chocolate Wafers. You can generally find them in the cookie aisle at the grocery store. They are almost always merchandised on the top shelf in my stores. If you can't find them, you can use chocolate sandwich cookies (like Oreos) and just crush them up (filling and all) in a food processor or by hand until you have crumbs. It won't be exactly the same, but it will still be good!

*You may need more or less wafers depending upon your serving dish. You'll need to use enough to cover the pudding layer.

*Wishing there were more cookie layers in your parfait? Go ahead and add them. Just make sure each layer is fully covered on the top and bottom with your pudding mixtures so that cookies have the opportunity to soften.

*Be sure to use peppermint extract in your whipped cream unless you prefer the taste of spearmint. It will be labeled as, "peppermint." "Mint" extract will taste like spearmint. I only used a 1/2 teaspoon. If you like a stronger flavor, add 1/4 teaspoon more. Just be careful, the flavor can be overwhelming if you use too much.

These are absolutely divine!!!!!