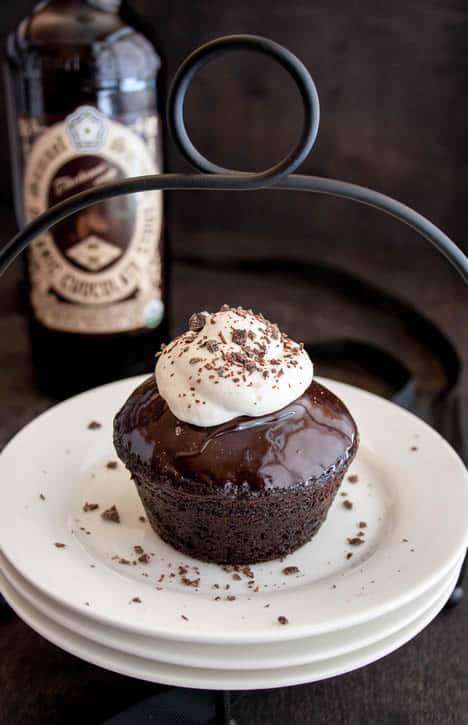 I finally baked beer in a cupcake and I LOVED IT!  I made Chocolate Stout Cupcakes filled with Irish Cream and wow, they are something special. For years now, I’ve watched others make many versions of this cupcake around St. Patrick’s Day.  And like so many other recipes, this has been filed away as an idea to try “someday.” Well, that day has come. This will be the beginning of a new tradition. Let’s pause for a moment of silence. :)

As I shared in my last post, Irish Soda Bread has become part of our March baking each year. And now, after all of the feedback I’ve received, I’m pretty sure these cupcakes are going to be added to the list.

The first thing I needed to do was pick a stout.  With all the craft beers out there these days, there was no lack of choices.  I don’t drink much stout, but I was drawn to Samuel Smith’s Organic Chocolate Stout.  I figured the extra chocolate flavor for a chocolate cake could only be a good thing, right? 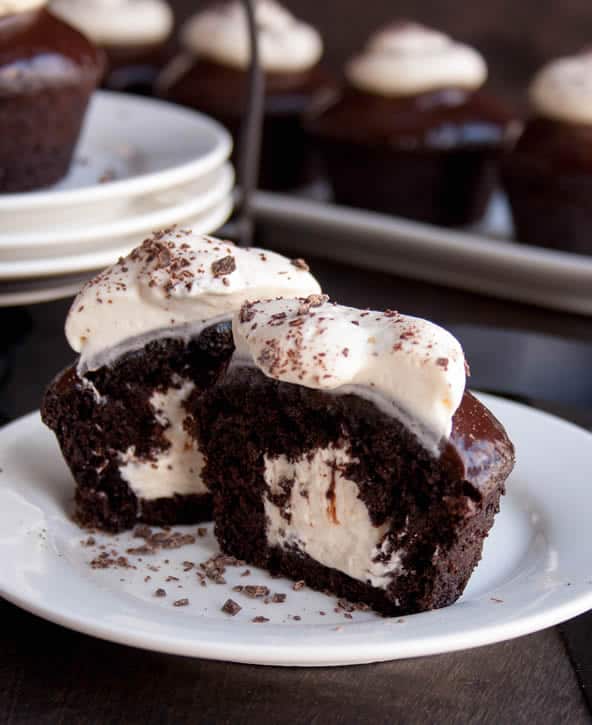 The cake was really easy  to make.  No creaming butter and sugars.  In fact, you melt the butter with the stout and bring it to a simmer.  Then you stir in the cocoa and your kitchen suddenly smells as if brownies are baking. I used my favorite Double Dutch Dark Cocoa for this recipe. It’s the same cocoa that makes Black Cocoa Brownies so, so good. That heavenly chocolate mixture then gets added to sour cream and eggs and finally your flours, sugars and other dry ingredients are added.

The cake comes out rich and chocolaty; the flavor is amazing.  I love a dark chocolate cake and this really satisfies a chocolate craving without putting you in a sugar coma. Different cocoas will yield different flavors, so use your favorite good cocoa; I think a Dutch process cocoa is going to give you the best flavor here.  I’m also partial to a dark cocoa for this cake. 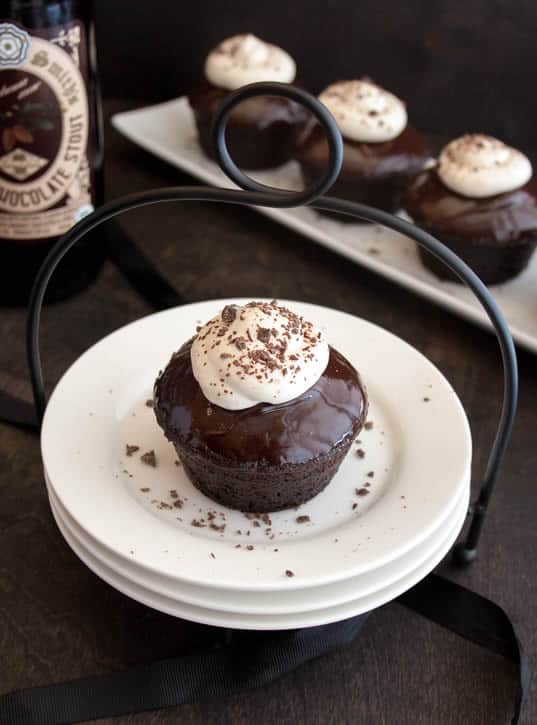 I debated how I would finish off the cupcakes.  Fill? Frost? Ganache?  I decided to do all of the above. Sometimes more is better.

In order to fill, you need to core.  I own a cupcake corer.  I’ve used it once.  I wanted to use it for these cupcakes, but quite frankly, it didn’t core out enough of the cupcake to hold as much filling as I had planned. I didn’t want my cupcake to be like those jelly doughnuts you bite into with so little jelly in it, it’s hardly worth calling a jelly doughnut. So, I decided to use a pastry tip to make a bigger cavity and then used a knife to scrape even a bit more cake out.  I wanted lots of filling for this cupcake.

For the filling, I used Whipped Cream Cream Cheese Frosting as the base and added Bailey’s Irish Cream for flavor.  I wasn’t sure how that would work out, but the taste was wonderful.  I used 6 tablespoons because I really wanted the flavor to come through.  You could use less or none at all.  It did really loosen up the frosting which was fine for filling, but I also wanted to use it as a topping. I used a round tip to pipe a dollop on each and everything worked out fine. 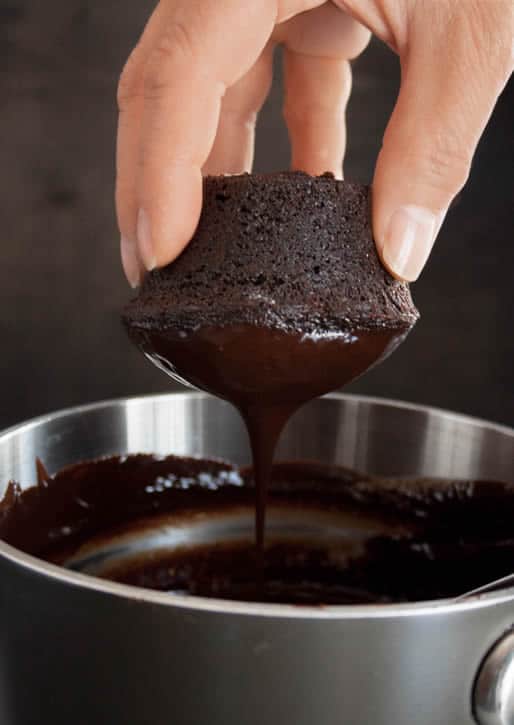 Once the cupcakes were filled and the little cake bottoms replaced, it was time for a quick dip in ganache.  I love this particular recipe for coating cakes.  It’s the one I used for A Tandy Birthday Cake and it is shiny and beautiful and sets up perfectly fudgy. The recipe makes more than what you need to cover the cupcakes, but I prefer the larger amount so there’s a big enough pool to dip into.  After dipping, it’s time to finish them off with a swirl of the Irish Cream frosting and a dusting of chocolate shavings. 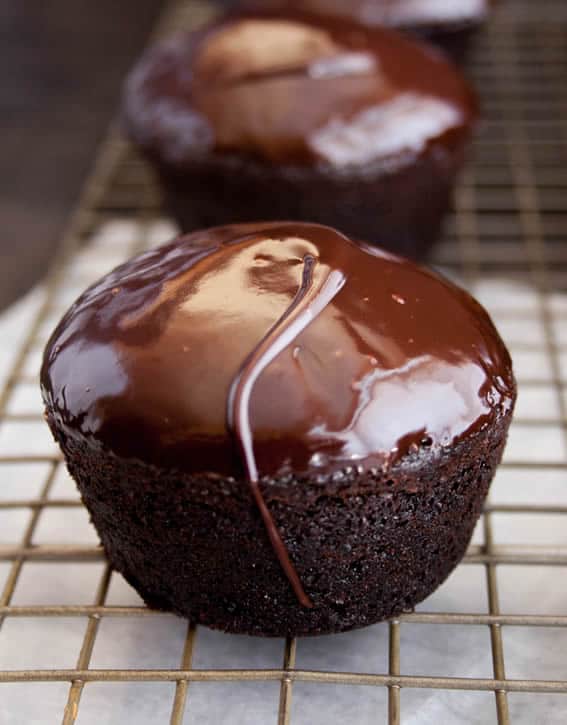 Feedback from my family?  Well, I bake quite often.  We also try many cupcakes in little specialty shops hoping to find that perfect little bakery. Even with all that, my husband said this was the best cupcake he’s ever had. Ever. He said he hates when someone sells a cupcake and it doesn’t really deliver on the flavor they describe in the name. My sister is visiting for the week and she told me that she really doesn’t even like cake, but she agreed with my husband. This was the best cupcake she’s ever had. Ever. She also said that she would never have seconds of a cupcake, but trust me when I tell you that my whole family, including my sister who isn’t fond of cake, was negotiating splitting another one….and then splitting another one.  Yeah.  They were good. Really good.

There’s the rich dark chocolate cake, then the lightness of the filling with the yummy taste of Bailey’s. The ganache on top is fudgy and almost chewy and works perfectly with the cake. The sprinkle of chocolate shavings is not only pretty, but it adds great flavor and a bit of texture to the creamy topping. 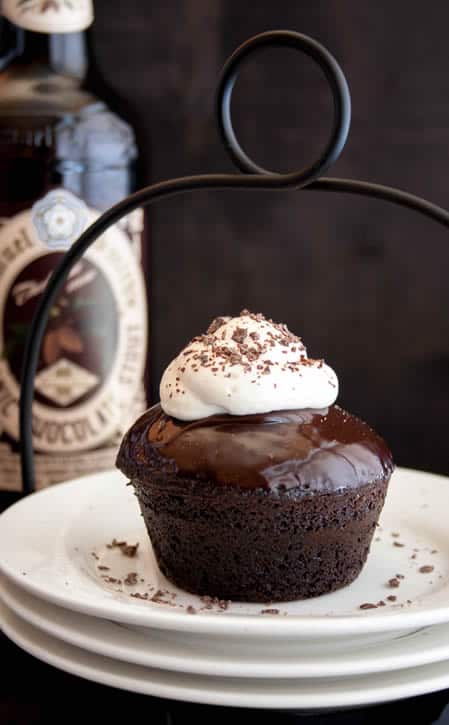 By the time we had them for dessert, they had been in the refrigerator for a couple of hours.  I decided I didn’t want mine to be cold and I didn’t want to wait, so I stuck it in the microwave for a few seconds.  My filling melted a bit, but it was still so good.  I can tell you it’s delicious cold, especially if you like cold cake. Otherwise, I would take them out about a half hour or so before serving and let them sit at room temperature so they can warm up a bit.  I think I like them best that way.

Like the ganache, I’m giving you a full filling/frosting recipe.  You might have a cup or so left over. It all depends on how much you fill and how much you top, but the amount in the recipe will give you plenty to do whatever you want to. I decided to generously fill and conservatively top.

You’ll also have all of those cake crumbs left over from coring out your cupcakes.  (That’s if you didn’t decide they were free game while you were coring :)  Save the extra crumbs in a bowl and cover it. Save your extra ganache, cover it and store it in the refrigerator.  Stay tuned. We’re going to use those for tomorrow’s post.

that keeps on giving.

*You can bake the cupcakes the day before and store them in an airtight container at room temperature to get a head start on the process. Then, you can make and do all of the filling and topping the next day.

*You don't have to use a chocolate stout; pick whatever you like. Many use Guinness for this recipe.

*You can use regular unsweetened cocoa powder for this recipe, but Dutch process will give you a smoother, more mellow flavor.

*Use full fat cream cheese for the most stability in your frosting. I use Philadelphia Cream Cheese.

could I use this filling instead of frosting for the middle of a two layer chocolate cake?

Hi Heidi, this is a version of my Whipped Cream Cream Cheese Frosting. I might reduce the amount of Bailey's in half just to give you a bit more sturdiness to the frosting. But, you can definitely use it to fill the middle of a two layer cake. You could also skip the Baily's in the filling and just lightly brush some on the cake layers. That way you get the flavor without adding the extra liquid to the filling.

PHENOMENAL!!!!!!! This is by far the best chocolate cake recipe I have EVER found (and I have tried many)! Bravo and thank you!!!

Oh Merry! You are so very welcome! I'm thrilled that you enjoyed it so much! :)

These taste amazing, as everyone's stated....but mine stuck like crazy to the pan and are not firm enough to even attempt trying to fill or dip in ganache. Could it be from too much air being incorporated while mixing?

Jennifer, if you followed the mixing directions, you shouldn't have over mixed. But I don't think that would be the issue. First, check to make sure you used all of the ingredients, especially the butter and that you used the proper amount. Second, did you prepare your baking pan properly by greasing it? Third, did you bake the cupcakes for the proper amount of time? If your oven runs hot or cold, that could affect your baking time. If they are underbaked, then they would be too soft to remove easily. Fourth, did you allow the cupcakes to cool in the pan for 10 minutes? They need time to set up a bit before you remove them but you still want them to be warm. If you try to remove them as soon as they come out of the oven, they will be too soft. If you wait until they are completely cool, they will be more difficult to remove. Those are the only things I can think of. These cupcakes are particularly sturdy, almost like a brownie cake, so you shouldn't be having those issues. I hope this helps and you give it another shot.

Can I use a spiced rum instead of a cream liqueur, and just reduce the amount?

Kaci, it shouldn't be an issue. As you mentioned, you'll probably need to reduce the amount. You just don't want to end up with soupy filling and topping.

If I make this recipe into chocolate cake (2 layer), about how long does it need to bake? Maybe 25-30 minutes? Since it is a dense cake, I thought I had better ask just to get a general idea. My oven temp is right on, according to my oven thermometer.

Hi Nancy, I made the recipe as 2 8" cake layers in this post, Whipped Chocolate Frosting. You'll see my notes on the cake at the bottom of the recipe. Here's what I wrote, but you can check the link if you want to see it. "I baked that recipe in 2 (8 inch) pans that were sprayed with cooking spray, bottoms lined with parchment, then I lightly sprayed the parchment. Bake at 350 degrees F. for about 40 minutes or until toothpick inserted in center comes out with just a few moist crumbs. Allow to cool in pans for 10 minutes, then remove from pans and finish cooling on racks. If using 9" pans, baking time will shorter."