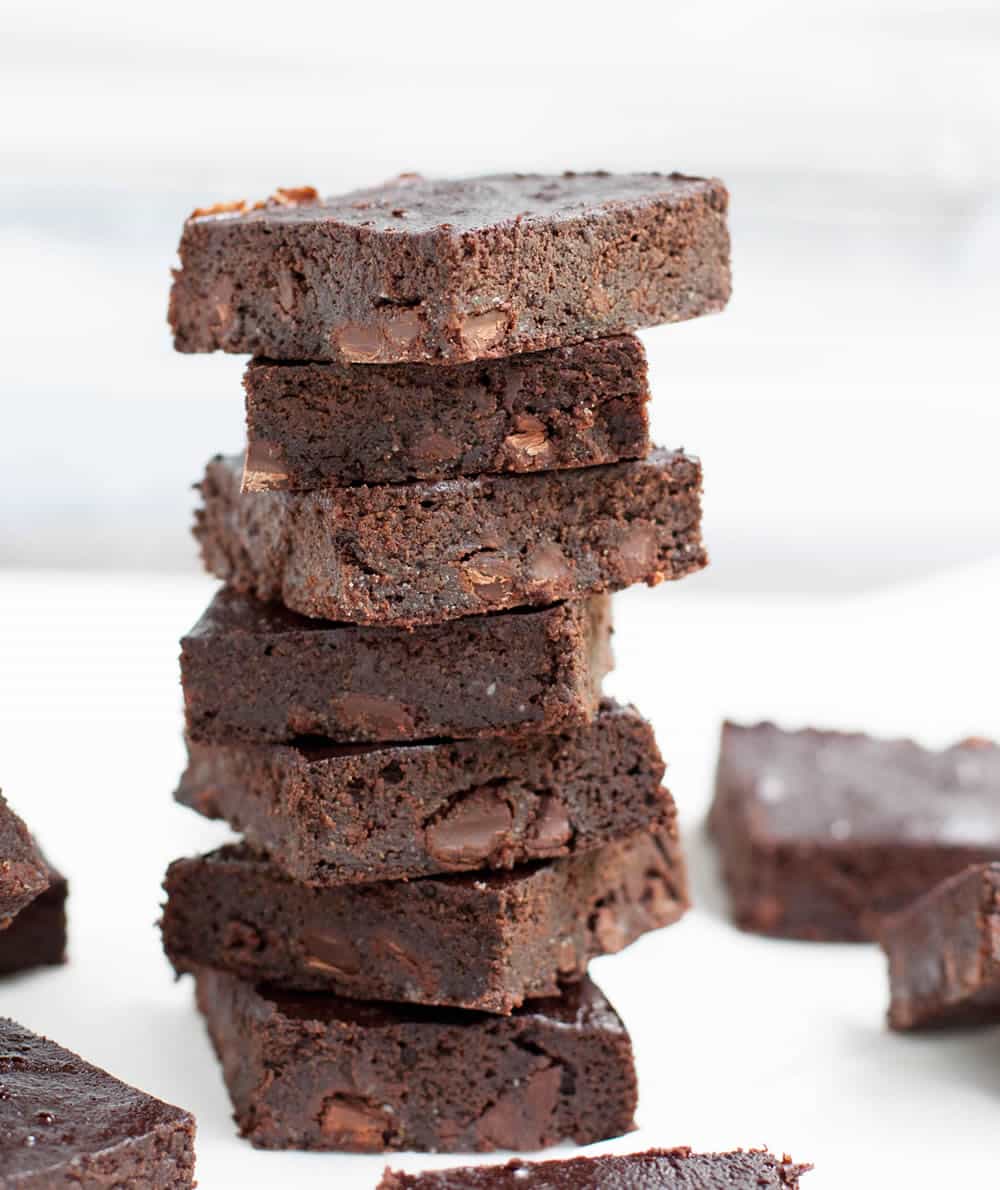 To be honest, I haven’t had much of an appetite for sweets this summer. It’s just been too hot (and we’ve already talked about being under the weather for most of the season.) But, there was just something about these brownies that got to me.

I didn’t actually think you could make Fudgy Zucchini Brownies. Most of the zucchini flecked brownies I’ve seen are actually more like cake, masquerading as brownies. When I saw this recipe on King Arthur Flour, and then I saw that you don’t even have to grate the zucchini…I was sold. (Do you hate grating things? I do.) In any case, it became a must try. 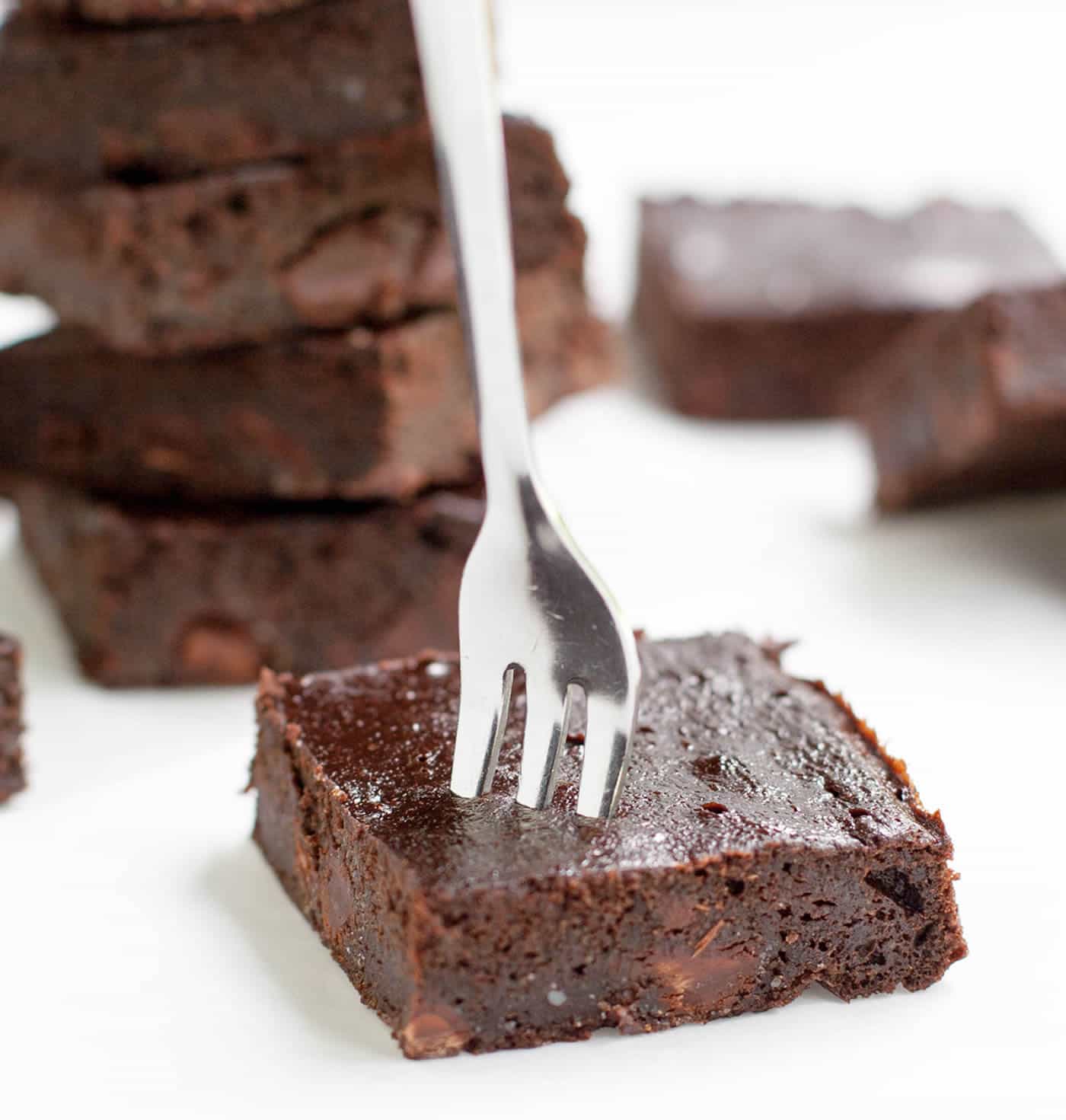 We love zucchini. It’s so versatile. Of course, we love all the chocolate things made with zucchini, like one of my favorite chocolate cakes, Chocolate Turtle Zucchini Cake. But we like non-chocolate options too like White Zucchini Cake. We love roasting it and eating it with pasta like we did here and here. We really love grilling it! It’s mouthwatering as a Grilled Zucchini Caprese Stack.

I wasn’t particularly looking for a brownie recipe. I have my current “go to” that I love, Black Cocoa Brownies, but I happened to have a boatload of zucchini to use up and it was a good time to try something new. I was intrigued by how fudgy they looked. Now, I spent a lot of time testing out brownie recipes when I was searching for the perfect fudgy, chewy, cakey texture. Black Cocoa Brownies are the best I’ve found yet and I’m still playing around with that recipe to see if I can make it even better. Today’s recipe is not related to my ultimate brownie odyssey. This recipe falls into the category of other brownies that I love. One thing I’ve learned about getting to the ultimate recipe of anything is that there’s lots of stuff to love along the way. 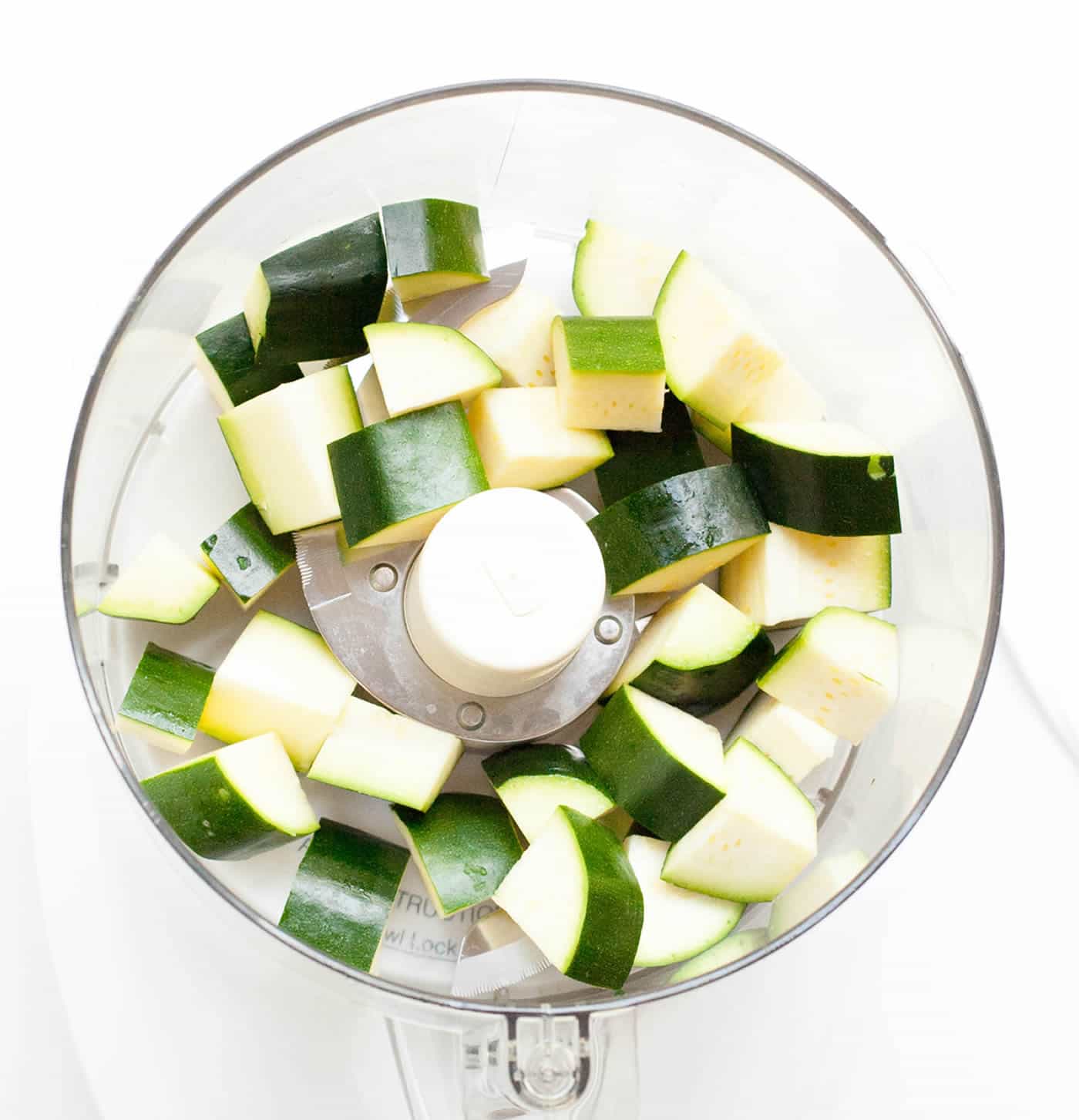 This recipe is a one bowl deal…your food processor bowl that is. All you have to do is cut your zucchini into chunks and throw it in the food processor. 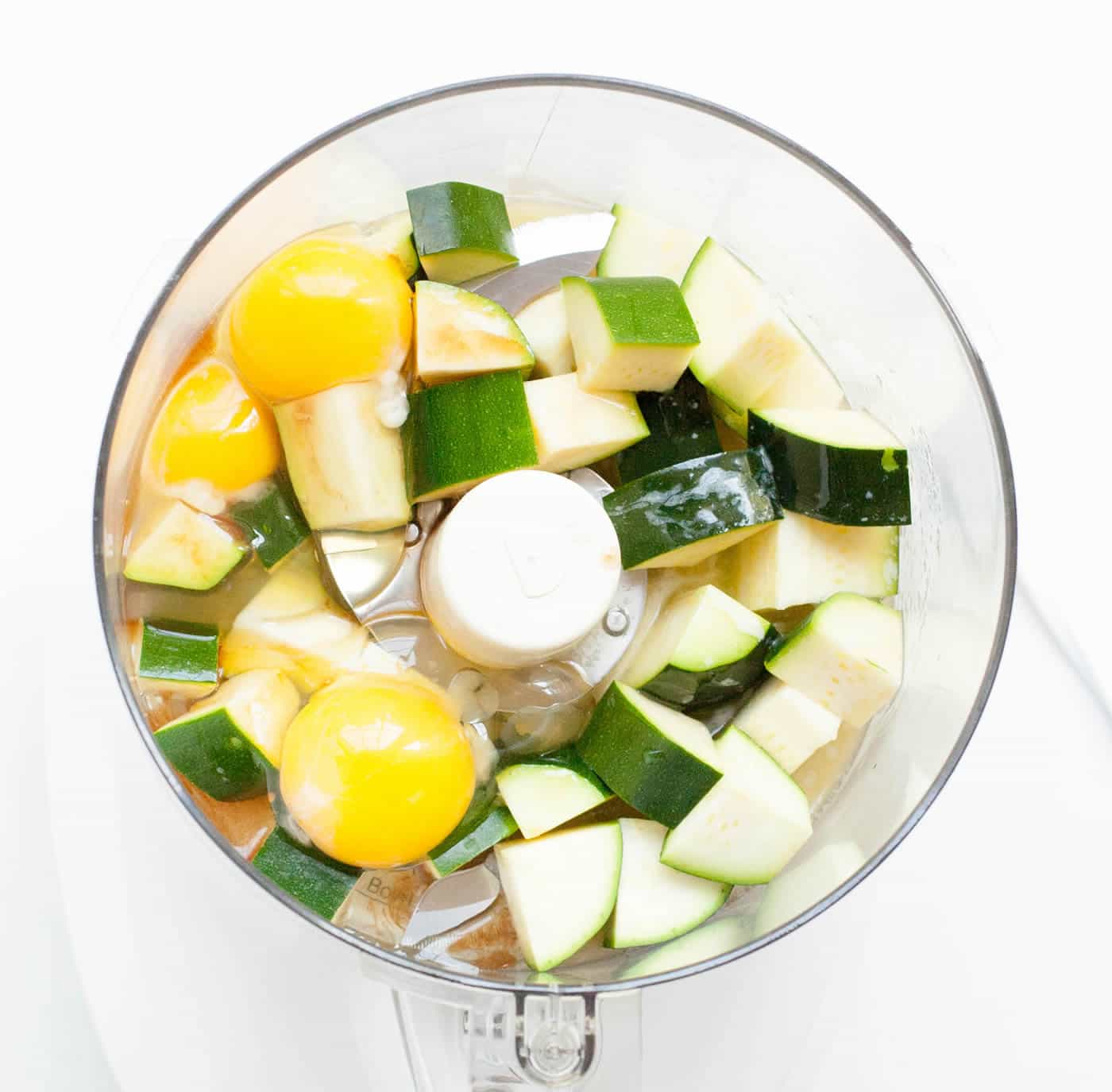 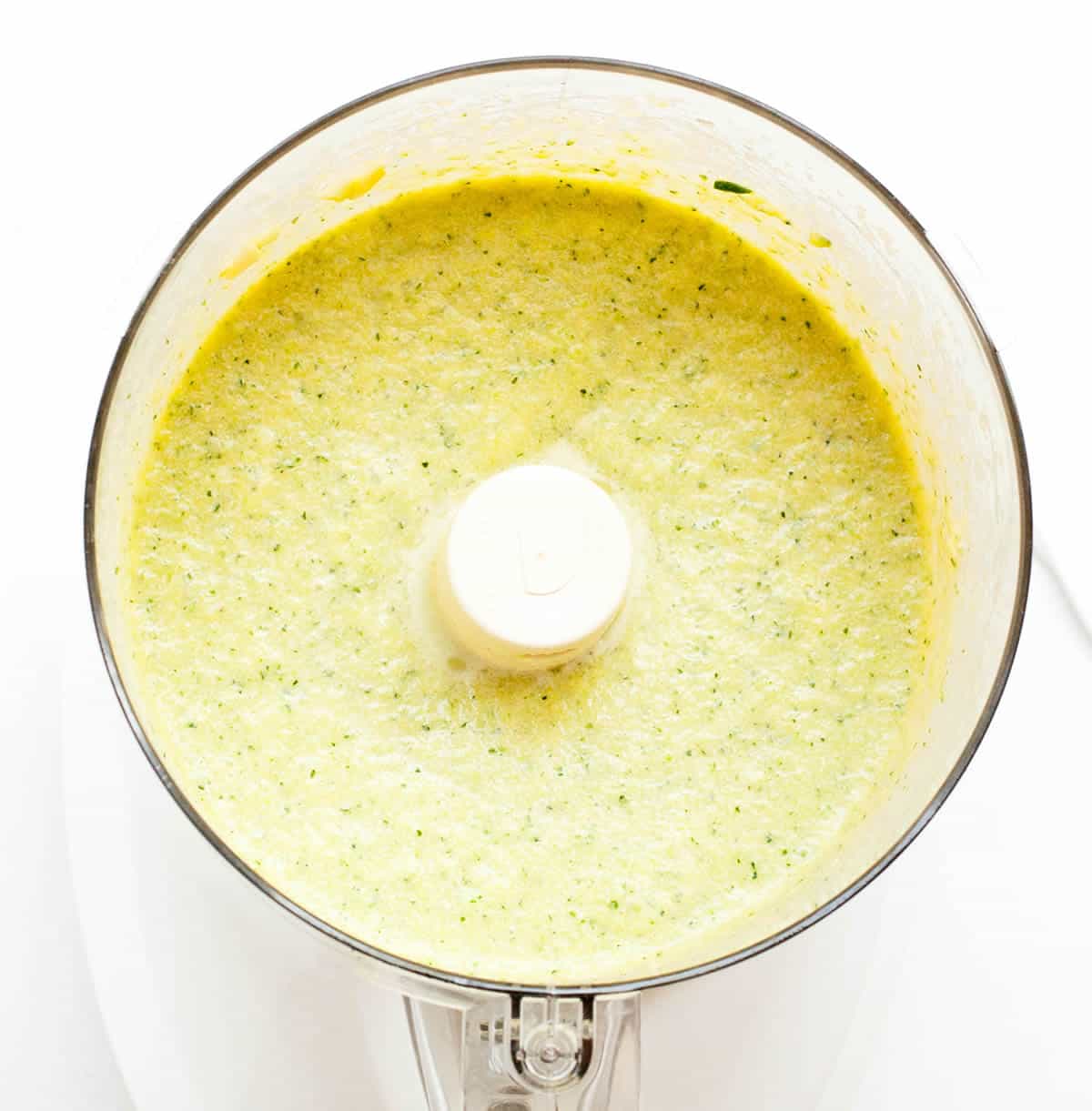 And process it until it’s smooth. 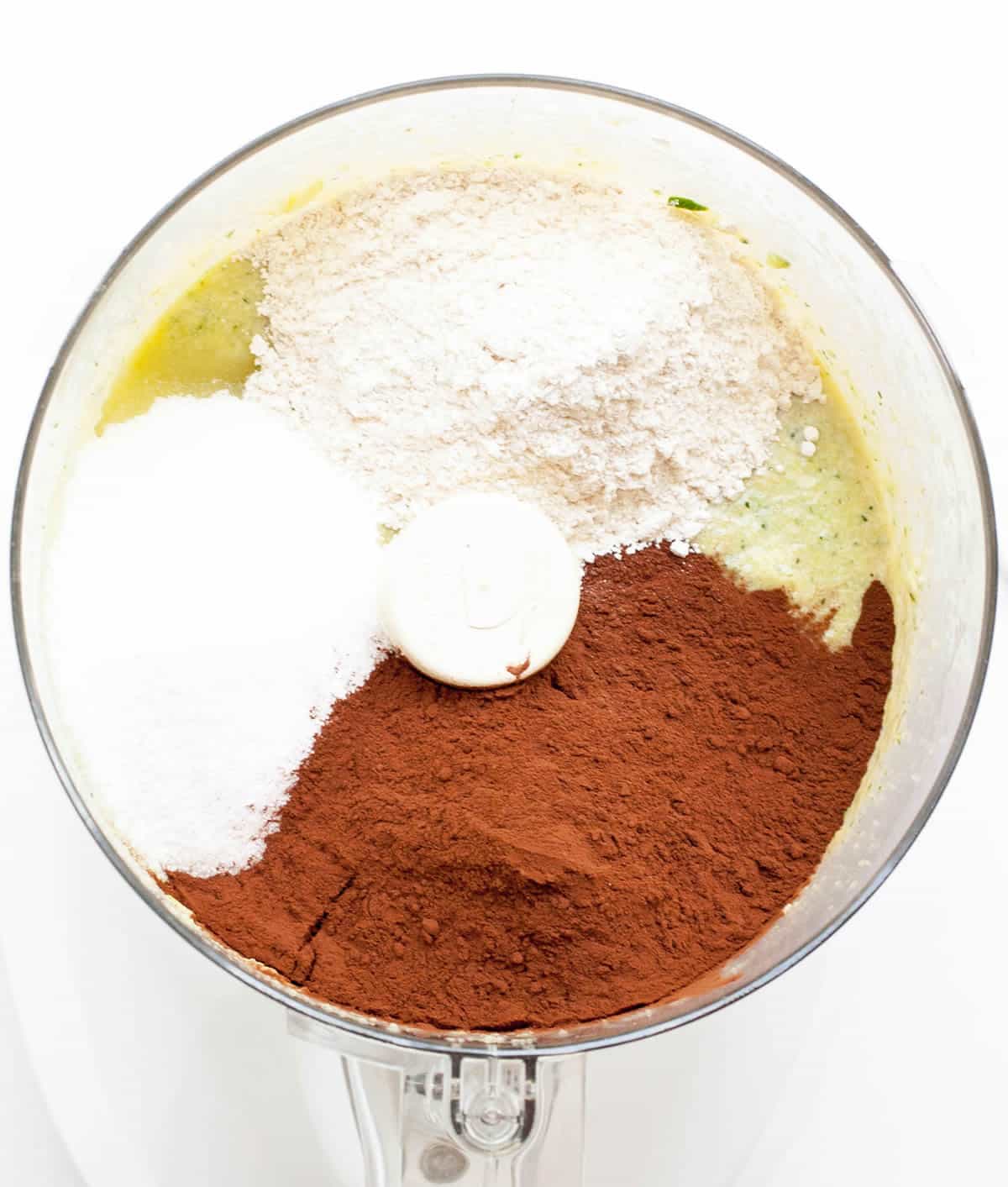 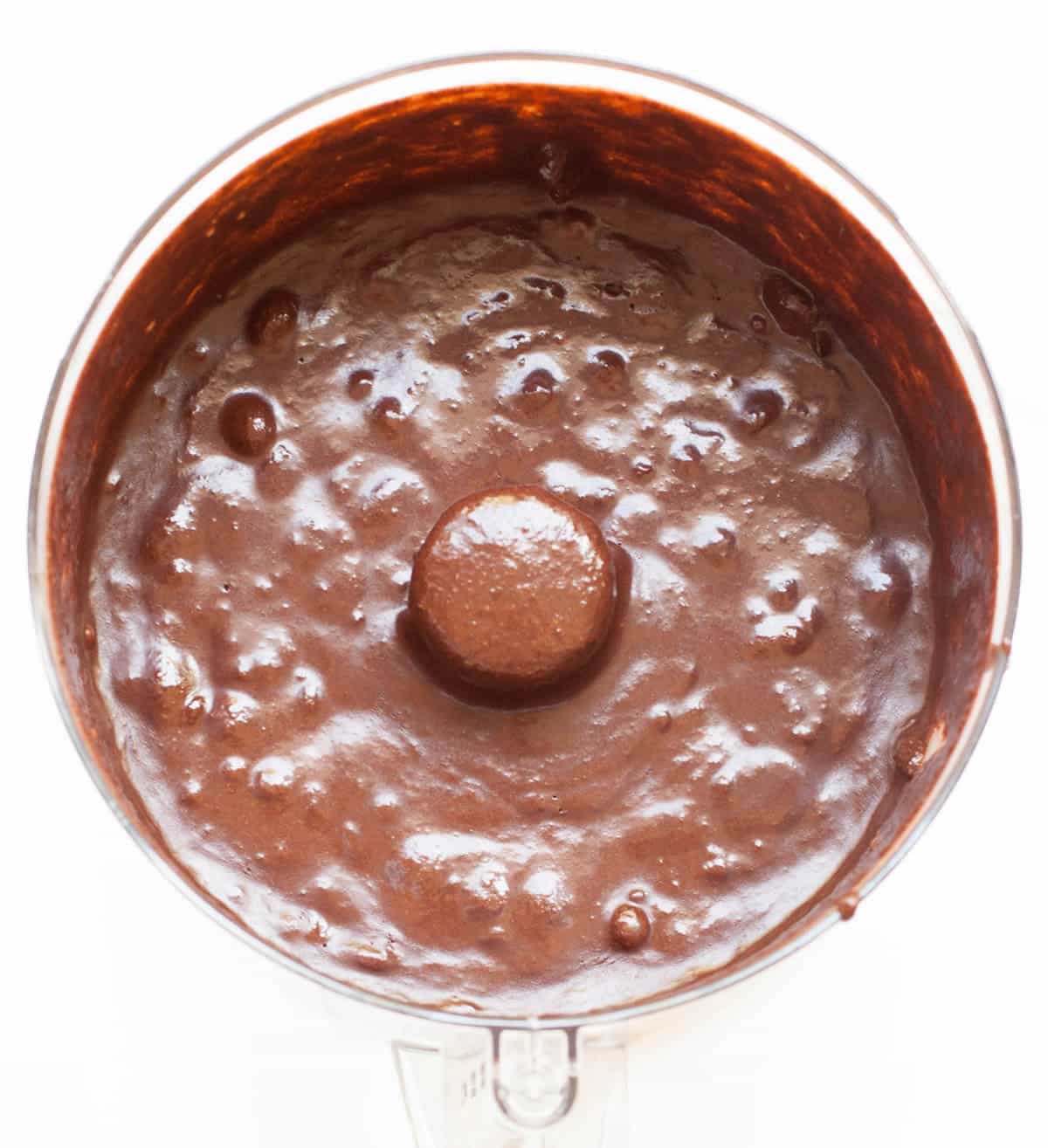 Then add all of your dry ingredients and process just until combined. Finally, you’ll add the chocolate chips and process again to break them up into smaller pieces. The smaller pieces make for a better texture in the final baked brownie.

Pour it into a pan and bake. Super easy! I let mine cool and then refrigerated them for nice clean cuts. 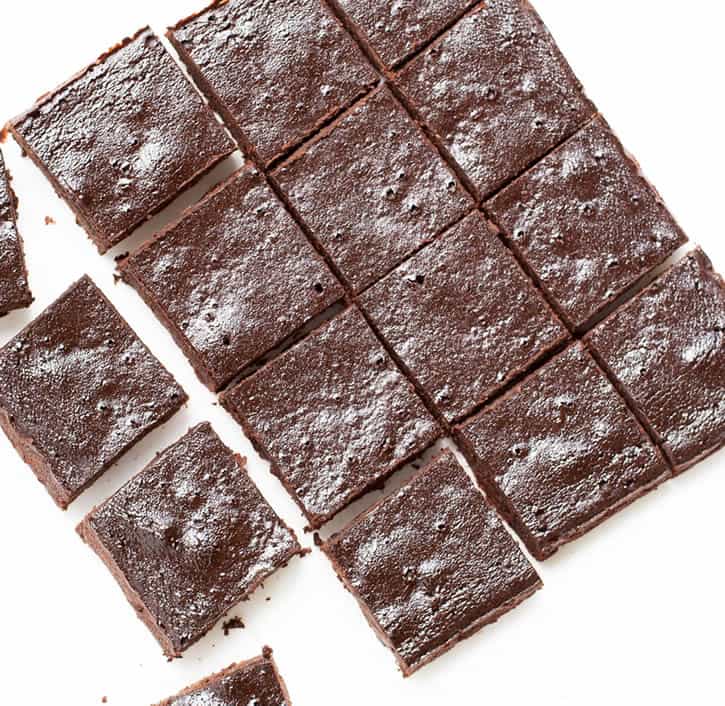 This was a totally different kind of brownie for me. I don’t usually make fudgy brownies. I like them. I mean, they’re chocolate right? But I love sinking my teeth into a chewy cakey kind of brownie. This one was not chewy or cakey. The texture was fudgy, and in some ways, reminded me of a flourless chocolate cake, just more fudgy. The recipe is similar to Black Cocoa Brownies, but it has less than half the sugar, half the flour and less than half the fat. That’s what intrigued me. 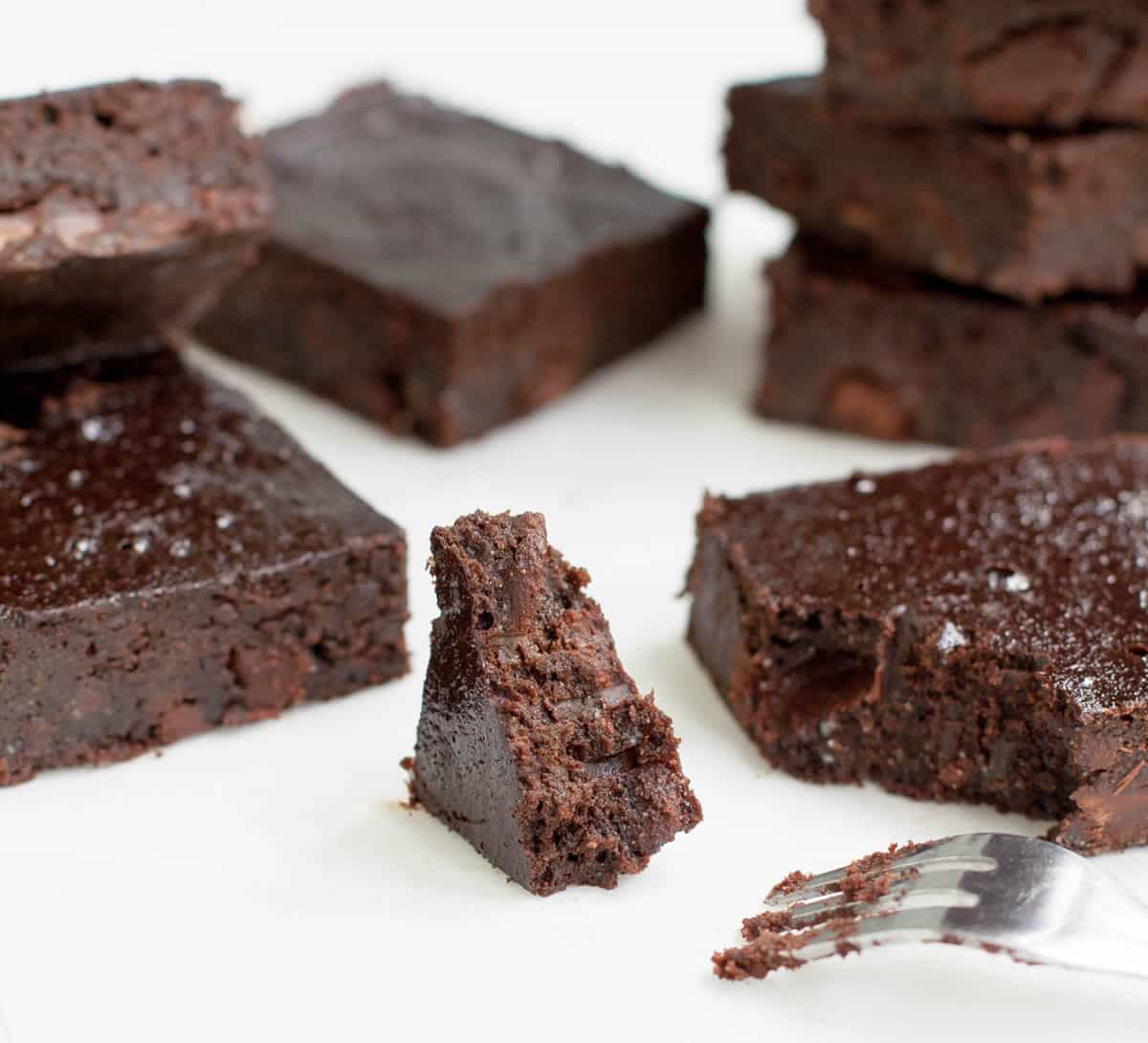 And guess what? I loved them! In this summer of not really being in the mood for many treats, this one got to me. I actually stored them in the refrigerator and we ate them cold. The original recipe tops them with a ganache, but I left them plain. I wanted simplicity. I loved that they weren’t super sweet. They are rich with chocolate flavor, but they don’t feel like a killer splurge and aren’t super rich so you don’t feel weighed down after eating one. I hadn’t planned on blogging about them, but I loved them too much not to share. So I had to make another batch, just for you. 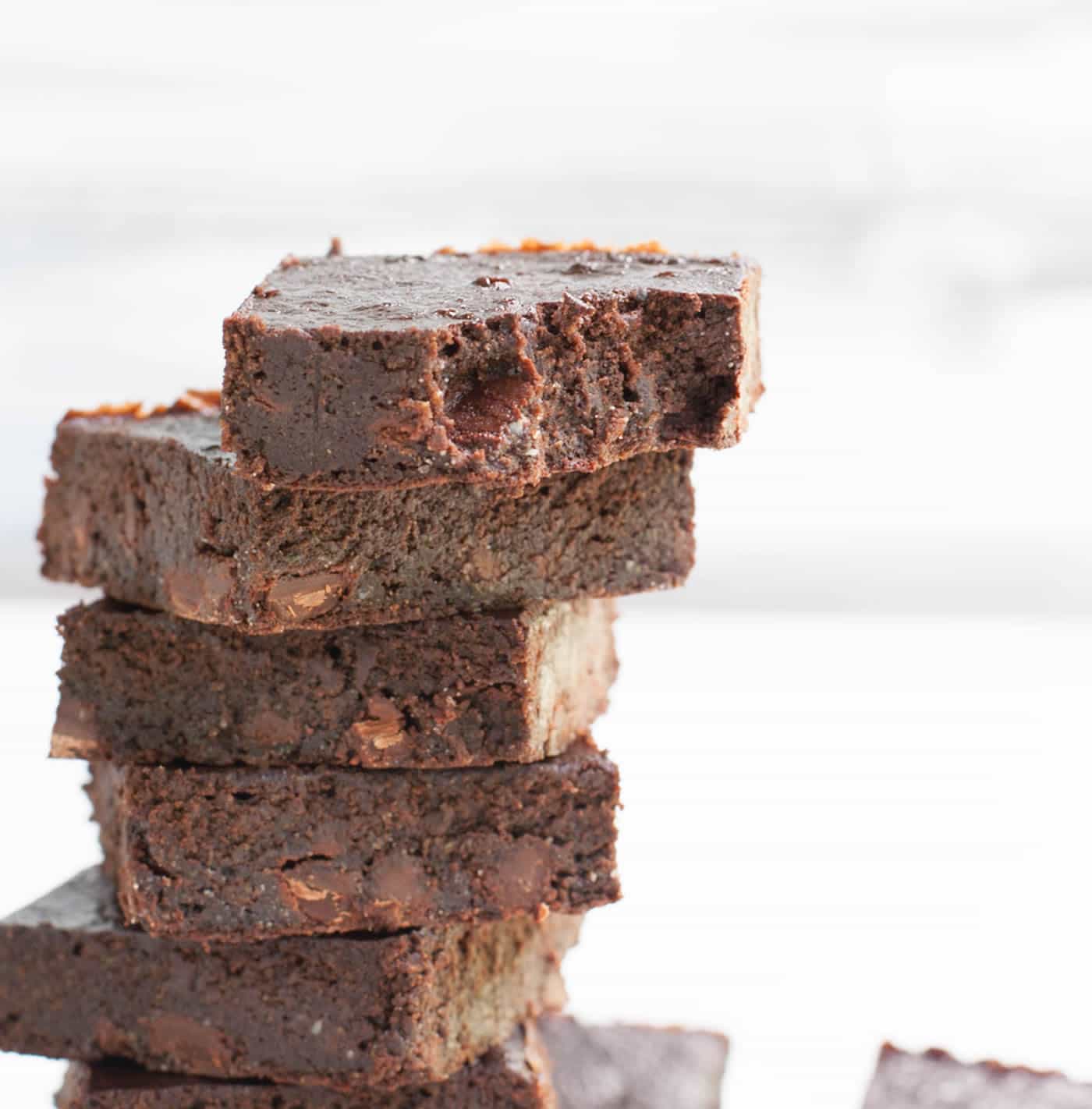 I was overwhelmed with zucchini the first time I made them. When I decided to make them again for you, there was no zucchini in the CSA box and my garden had none to give :(  Ugh! I had to go buy a zucchini! In the summer! It just seemed wrong when just a short time ago I was drowning in them!

I actually used a yellow squash the first time and then regular green zucchini the second time. So if you have a bunch of zucchini or summer squash hanging around, you should put this on the list of things to do with it. If you don’t, go buy a little squash so you can make these brownies. Fudgy Zucchini Brownies. No grating, one bowl, quick work with a food processor and yeah…it’s still ridiculously hot around here and yes, I did have to turn my oven on to bake these fudgy bars. 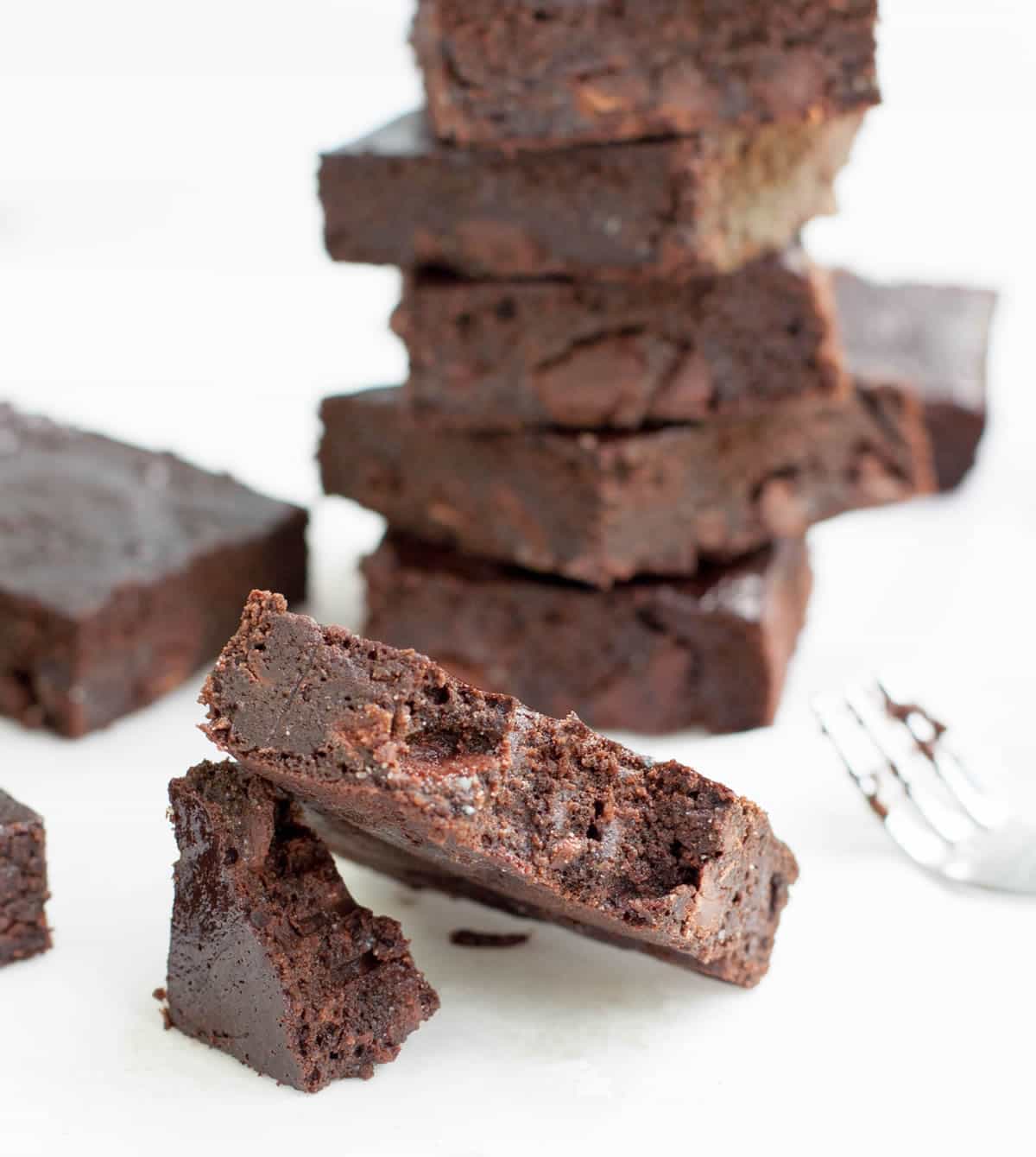 *I've said it many times but different cocoas will produce different flavors. One of my favorite cocoas to use is Double Dutch Dark Cocoa For this recipe, I used Bensdorp Cocoa. Love 'em both. You can use regular unsweetened cocoa, but I love the flavor that Dutch process cocoa provides.

*You can use zucchini or yellow squash in this recipe.

*I tried both semi-sweet and bitter sweet chips and preferred the semi sweet. You could also use milk chocolate chips, if you're looking for more sweetness.

*Processing the mixture does create air bubbles in the batter. You'll see little holes on the surface of my baked brownies from the bubbles that popped in the oven. (A couple are just from my testing toothpick.) I should have dropped the pan on the counter a few times to release them. I've added that step to the instructions. If you decide to frost the brownies, you won't see them anyway.

*If you don't have a food processor, you can puree the zucchini and wet ingredients in a blender, pour it into a bowl, then stir in your dry ingredients.

*You don't have to store these in the refrigerator, but I really like them cold. For the best cuts, cut cold brownies with a hot knife. I just let my knife sit in a tall mug of hot water for a minute or two, then wipe it dry and cut. I reheat it in the water every couple of cuts wiping the blade with a paper towel after each dip in the water.

Well I'm late coming to the party but I had to stop by and say I made these at least 3 times this summer using both zucchini and summer squash. They're SO good and I agree with you Ramona-they're amazing when they're cold. My husband Bob said they taste like fudge-they're velvety and creamy good.

Thanks so much for another fantastic recipe! :)

Carol, it's so nice to hear that you're a fan of these too! I'm planning a post for another version of these (shhh! don't tell anyone. I just shot it this morning), but I'll tell you that we made this recipe more times than any other dessert this summer. It's so easy that my husband and kids got in on the game and made double batches (while I moved on to other recipes) Whenever we were deluged with zucchini, they broke out the food processor and went to town. (A double batch fits nicely into a 13x9 pan. They'll be thicker, but we had no complaints with that :)

Very timely recipe. We are buried under zucchini! Wish we were neighbors so I could give you some. This will definitely be made this weekend. Also, looking for a good zucchini bread recipe that doesn't come out dense, gummy, or oily. Any suggestions?

Hey Cyndi! I just picked up my CSA box yesterday and we have zucchini in it this week! (Yay!) So, I'm back in the game. I don't have a "go to" zucchini bread recipe to point you to...I'm usually working it into cakes or savory dishes. I should work on that because I do love it. I'm with you on the texture. So many quick bread recipes are laden with sugar and oil. If I were going to work on a recipe, I would be looking at White Zucchini Cake and Whole Wheat Banana Nut Muffins. I'd probably start with the cake recipe and either use all purpose or whole wheat pastry flour, reduce baking powder to 2 teaspoons, use 2 whole eggs instead of the egg whites and add desired spices (and maybe some lemon zest?). I would also probably just melt the butter instead of whipping it up with the sugar (or just use 1/2 cup oil) and then sort of follow the muffin process for mixing. It should come out really good and if you wanted it to be even moister, I would just increase the oil or butter by 1/4 cup. TMI? lol! (But I know you're an experienced baker and could easily work it out.) Now I want to go into the kitchen and experiment! (Besides the bread, you should definitely try the Chocolate Turtle Zucchini Cake if you love those flavors. It's really good!)

[email protected] A Dash of Cinnamon

Always a fan of hiding veggies in desserts. (P.S. I'm not a fan of grating either, very time consuming and hard to clean the grate. Not a fan)