I’m still riding the no bake bandwagon with these Chocolate Covered Blueberry Clusters. 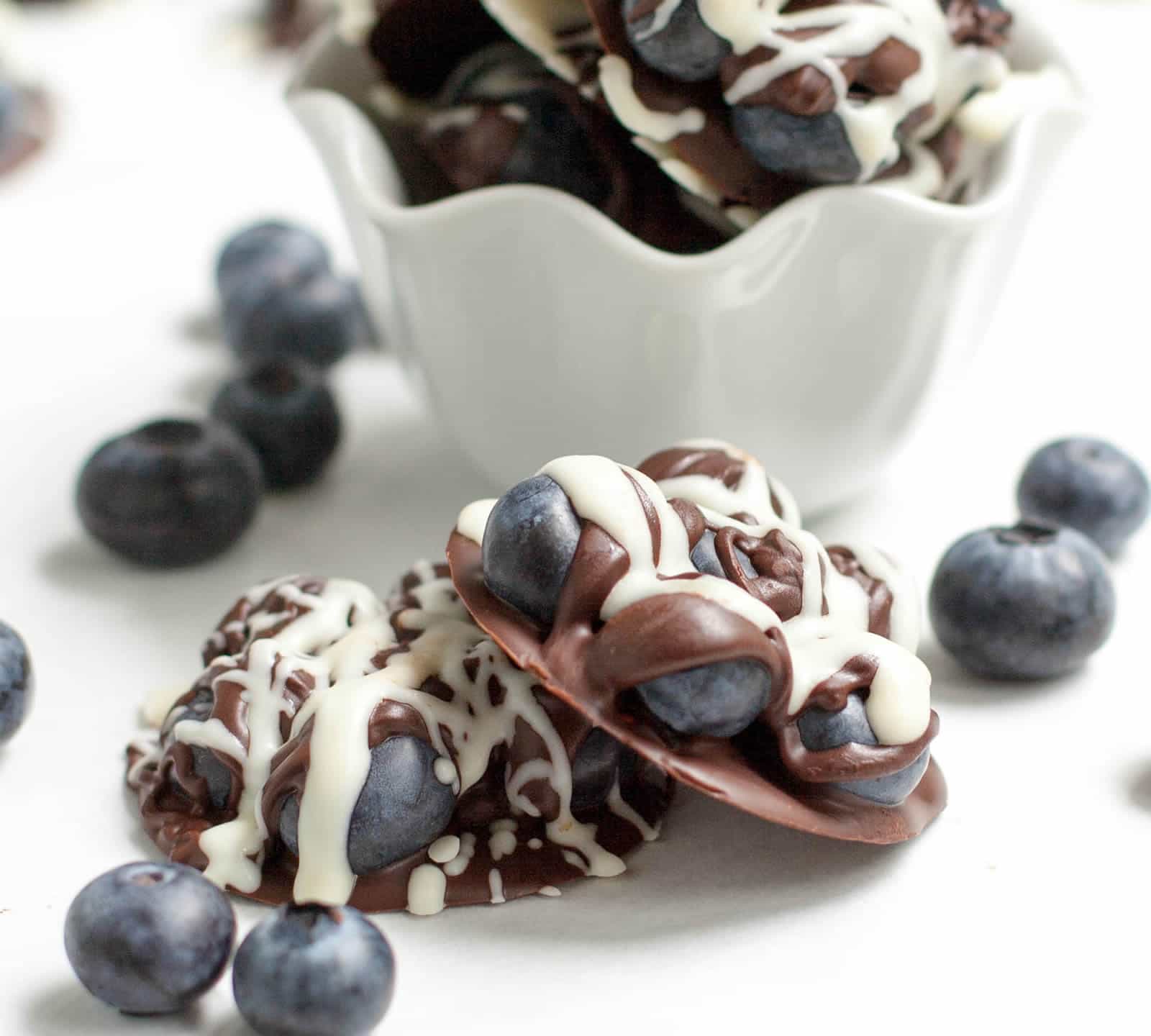 It’s been a crazy summer here. We rarely get sick in this house but apparently our number came up in June and we’ve spent the better part of the summer in a constant rotation of maladies.

My husband has gone scot-free (let’s all knock wood!) but the rest of us? Ugh! Emergency rooms, hospital stays, endless trips to the doctor, tests and more tests.

What has that meant for the summer? Well, one of my kids didn’t get to enjoy the last week of school, we had summer camps canceled, vacations delayed and all other activities planned had to be low key. And I’m a planner with a capital “P.”

Talk about being completely thrown off course! Months of planning and researching how this summer was gonna roll just thrown out the window…or at least thrown off kilter. So basically, it hasn’t felt a lot like summer around here. #boohoo 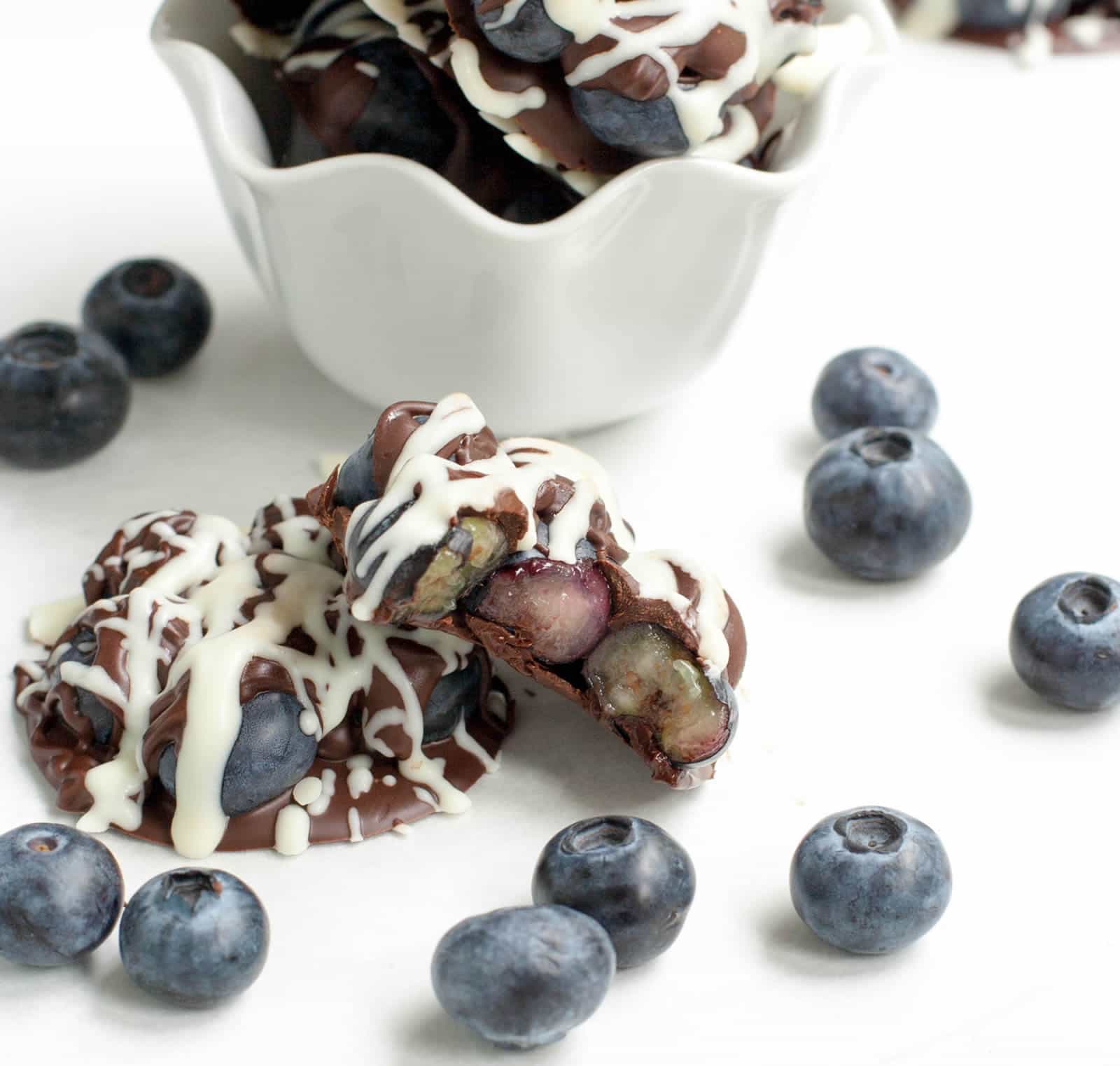 When everyone was finally back to normal (seriously, just a week or two ago) I decided that we needed to launch some classic summer fun that didn’t take us too far from home base, so we headed to the shore for a week. Time to get some sun, sand and surf…and in the evenings, hit the boardwalk.

The weather was pretty hot, so appetites were a little on the low side, at least for me. My son, on the other hand, wanted every treat that we passed. “Mom,  can we get taffy? Ice cream? Caramel corn?

Dad? How ’bout some fudge??? ” That kid’s eyes were simply as big as saucers every time we ventured out for a walk. His older sister was simply happy to splurge on whatever her little brother could get us to buy that evening. 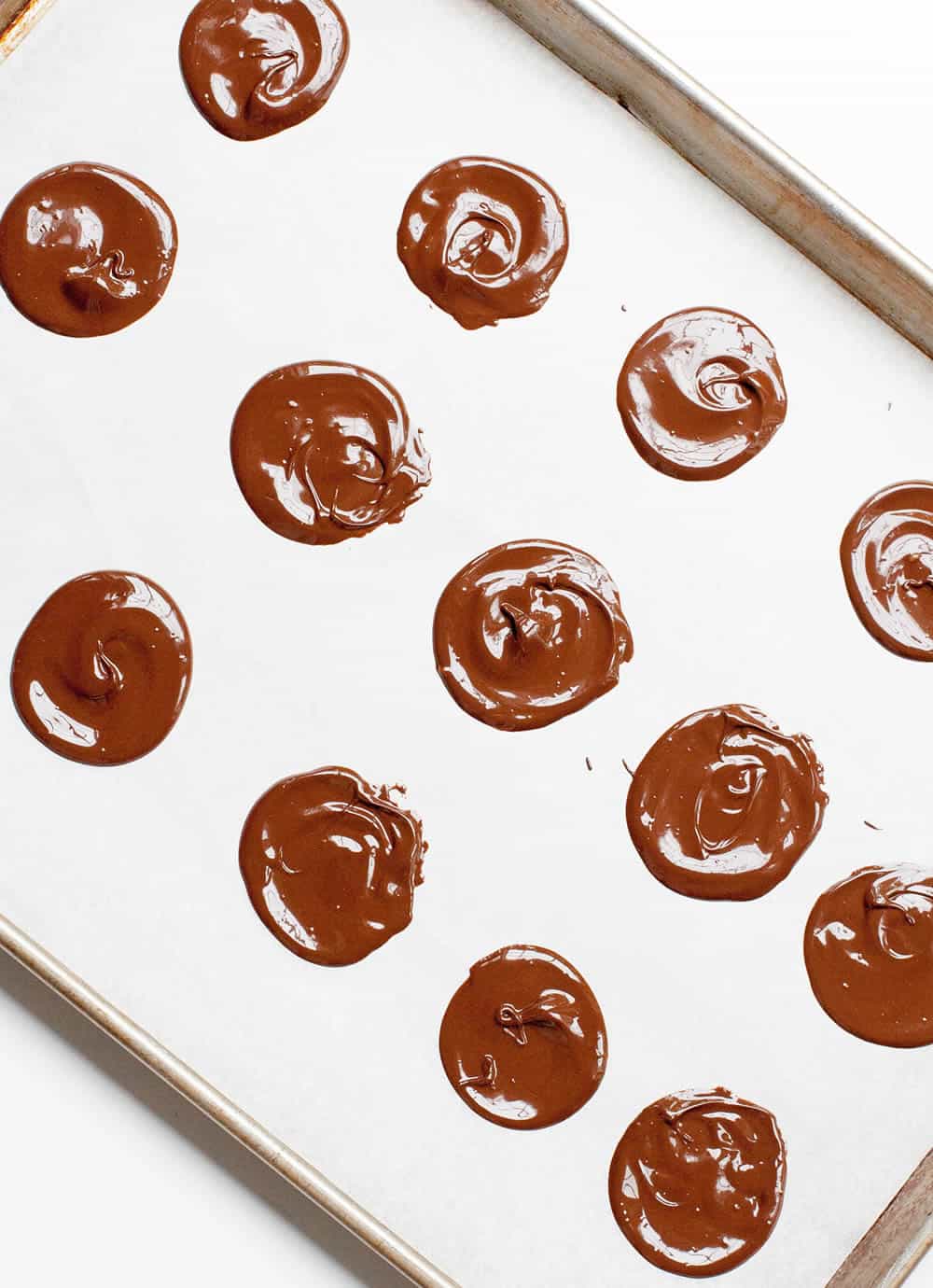 One night, while my husband took my son to check in on the construction of a new roller coaster ride, my daughter and I ducked into an air conditioned fudge shop to peruse the cases full of treats, and, to be honest, cool off a bit.

We were deciding which flavors of fudge looked the best when I spied some Chocolate Covered Blueberry Clusters on one of the shelves. I wasn’t really much in the mood for rich fudge, but oooh…blueberries? They got my attention and I knew we would be adding those to our order.

They carried them in both milk and dark chocolate, but clearly this was a popular item because there were only a few left and they were milk chocolate. So, we bought a couple and split them with the boys.

Everyone loved them and wanted to buy a few more, but in that short span of time, they were gone. I made a mental note to make some when we got home. 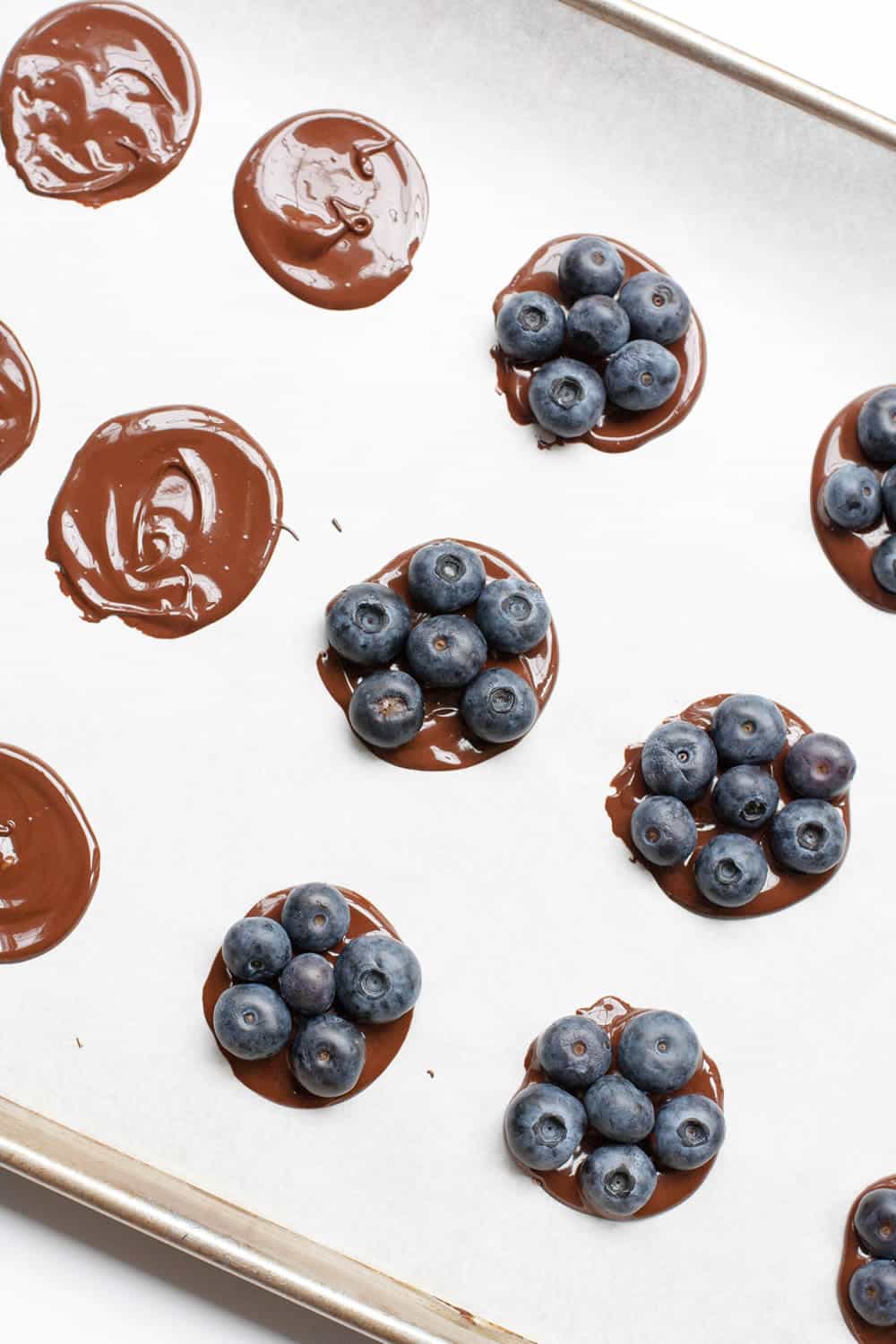 Now I don’t know why it’s never occurred to me to cover blueberries with chocolate. I’ve covered strawberries and grapes and bananas and other fruits, but never blueberries, at least not in true candy form.

And, I’m a huge fan of blueberry everything! Go figure. Anyway, I thought it was a genius idea and wanted to replicate it with a few changes.

First, the Chocolate Covered Blueberry Clusters we had on the boardwalk were covered in milk chocolate (they were out of dark.) I thought it was a bit sweet for the already sweet berries, so I made the move to dark chocolate.

I didn’t want to cancel out too much sweetness though, so I added white chocolate for a little bit of balance and because I thought the creamy white chocolate was a perfect match for the blueberries. #blueberriesandcream 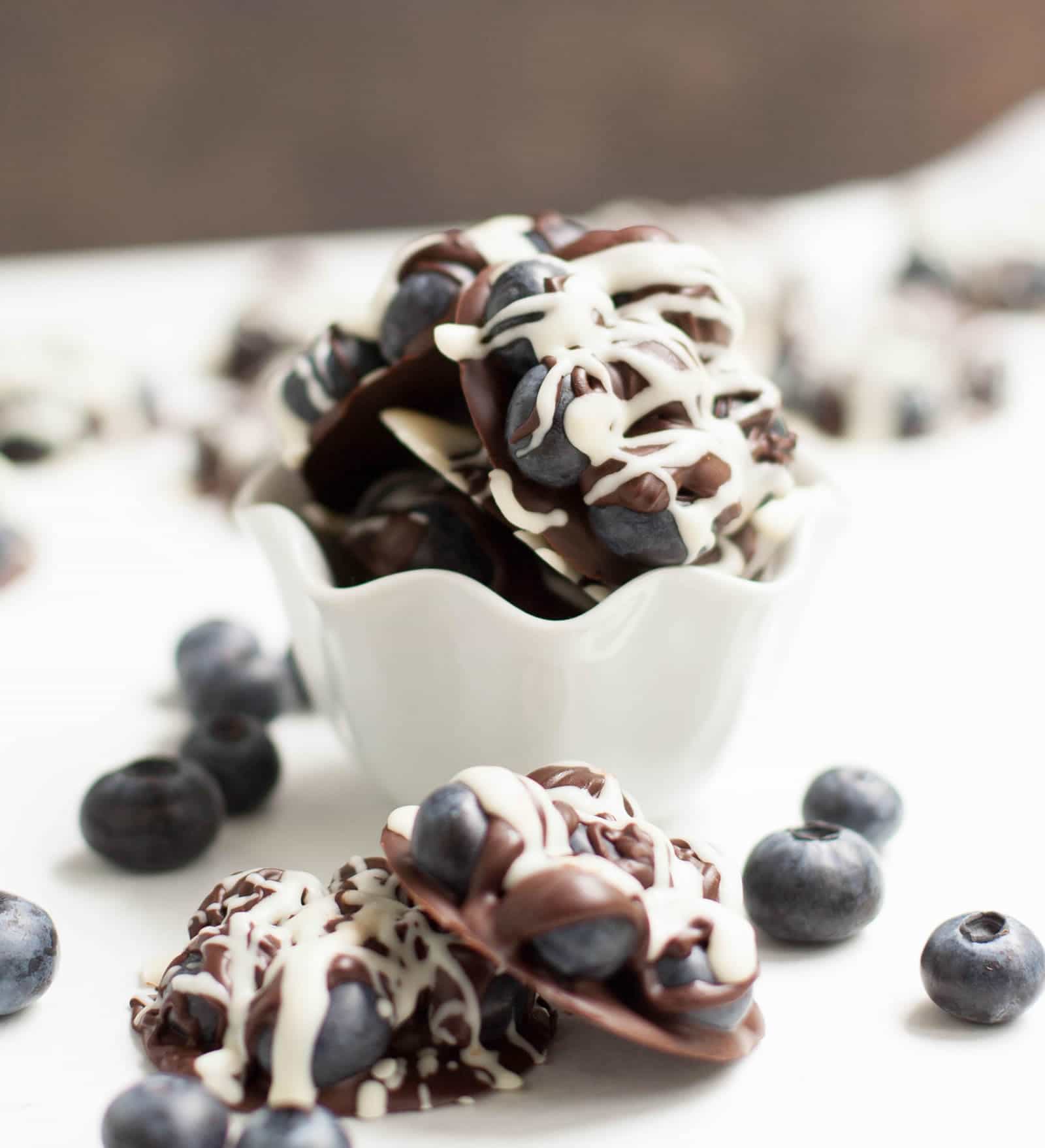 Second, I thought the ratio of chocolate to blueberry was too high. (I know, is that even possible?) I wanted more of that refreshingly juicy fruit; I didn’t want it to get lost in the cluster. That’s the other thing, they basically made them as you would make a peanut cluster; they stirred a bunch of berries into melted chocolate and then dropped them into mounds on a sheet.

You can do that too, if you want to. It’s faster, has a higher chocolate ratio, but you will use more chocolate and you do have to be careful not to burst a blueberry in the process. But it will be good, because chocolate covered blueberries are good, in whatever form you choose. 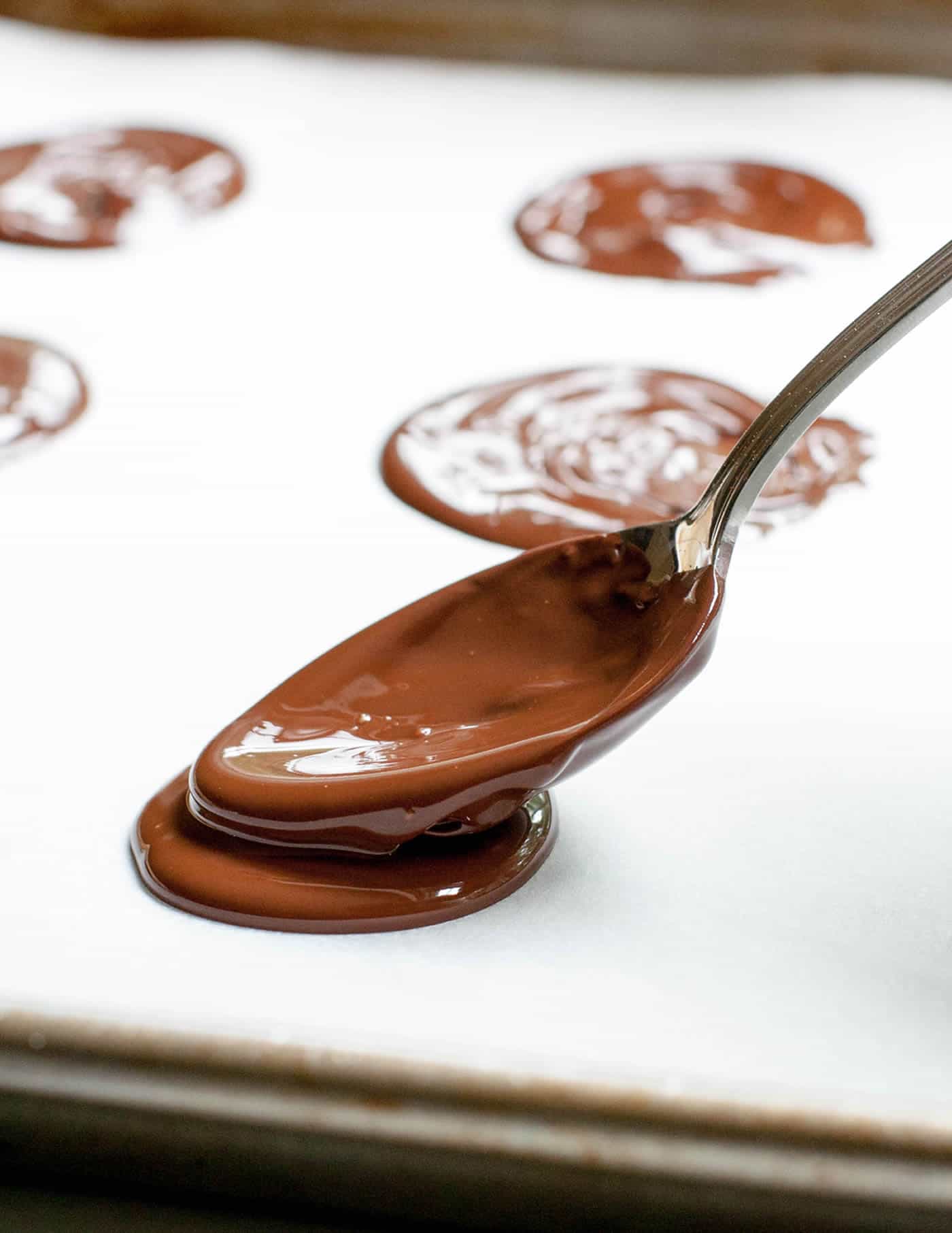 I decided that my berries would not be completely deluged in chocolate. Again, there’s a time and a place for aaalll the chocolate, but I wanted this chocolate to accent the berries, not completely overwhelm them. So I started with melting some dark chocolate and spreading some thin discs onto a sheet. 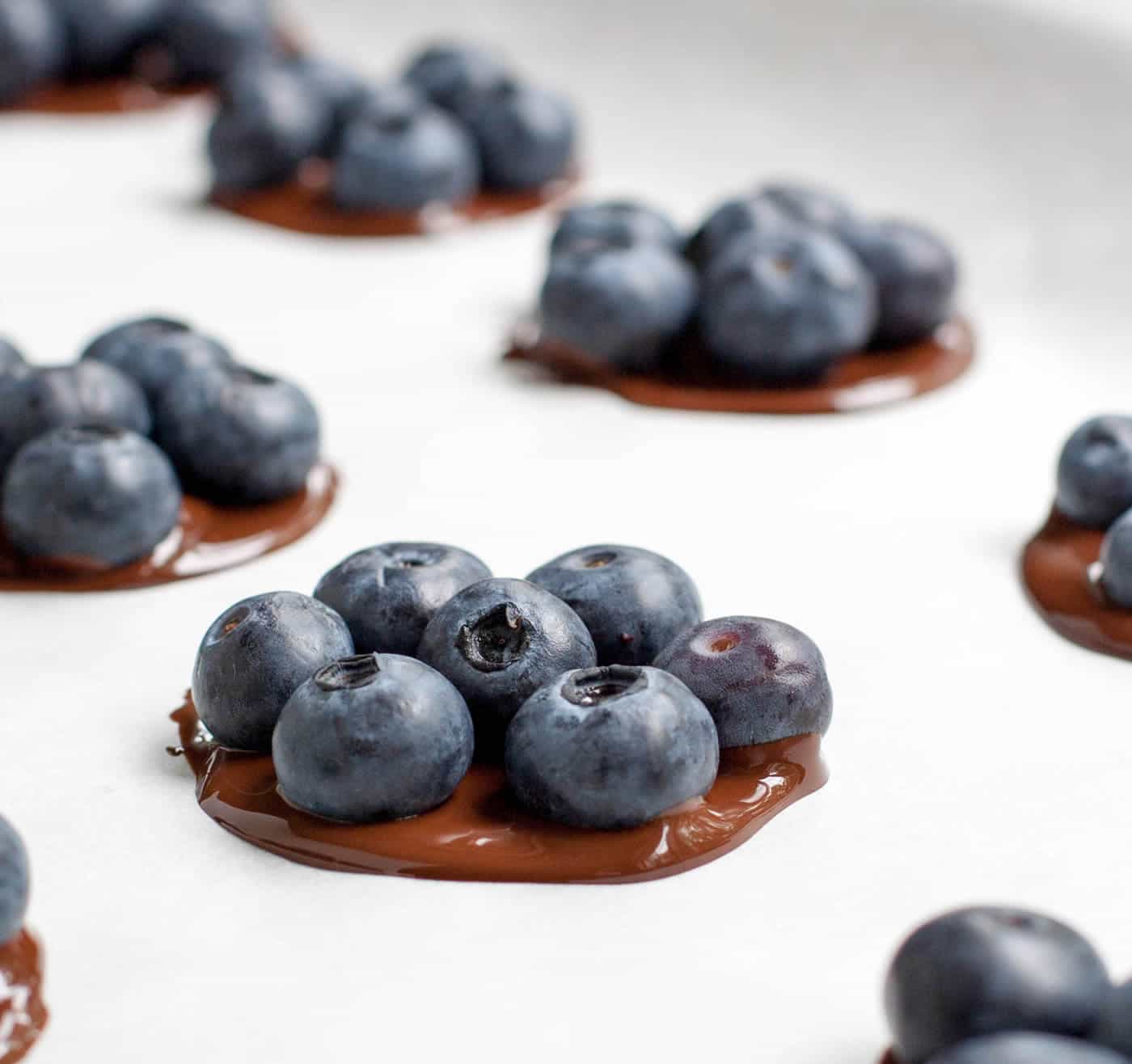 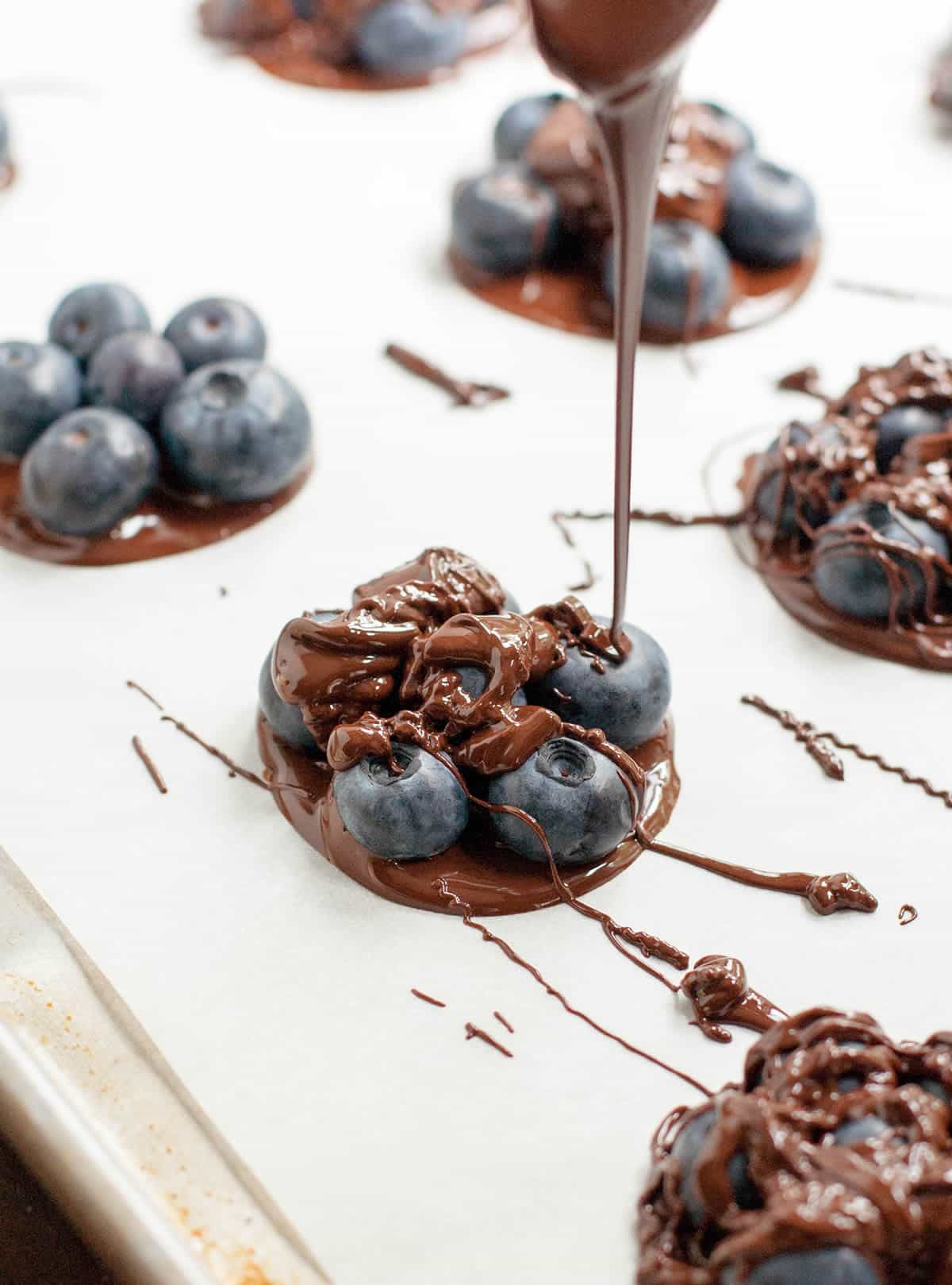 I had some super plump, large, sweet organic blueberries to work with that day. I placed as many blueberries as would fit on each disc and gently pressed them into the melted chocolate. After that, I drizzled more dark chocolate on top of them. 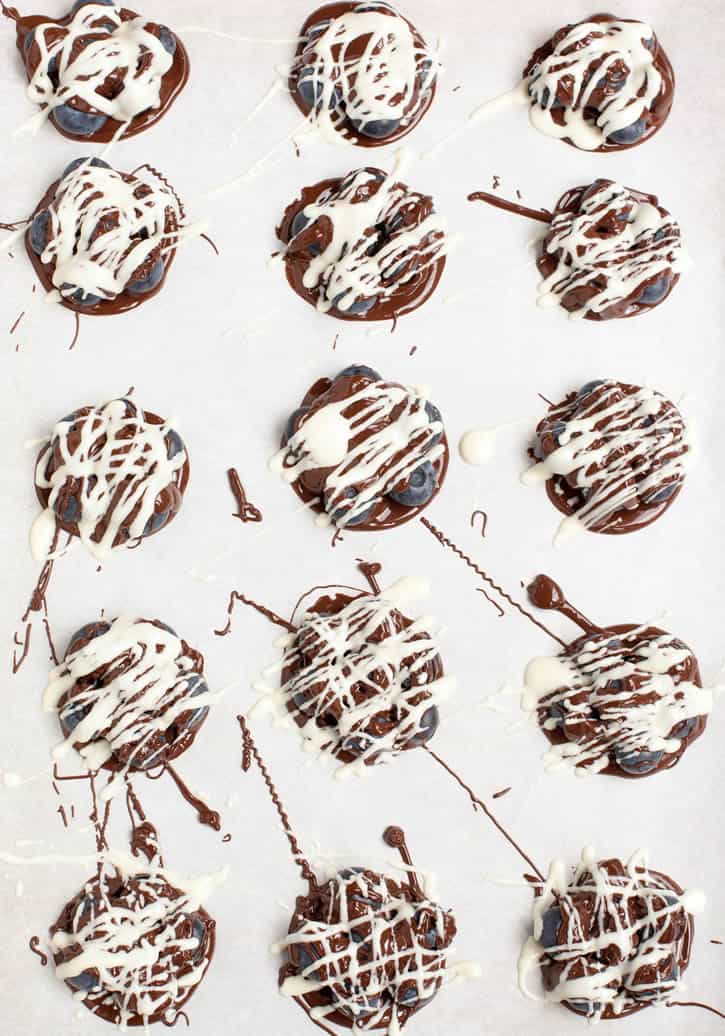 Finally, I drizzled melted white chocolate on top of each cluster. You’ll see that I drizzled all of them with abandon, caring not about consistency of drizzle pattern, not one looking anything like the others, with nary a worry that some of them had pools of chocolate where drizzles were intended.

We had just gotten back from a sunny week of vacation and I was feeling the flow of a carefree summer (and completely ignoring anyone engaging in back to school chat.) 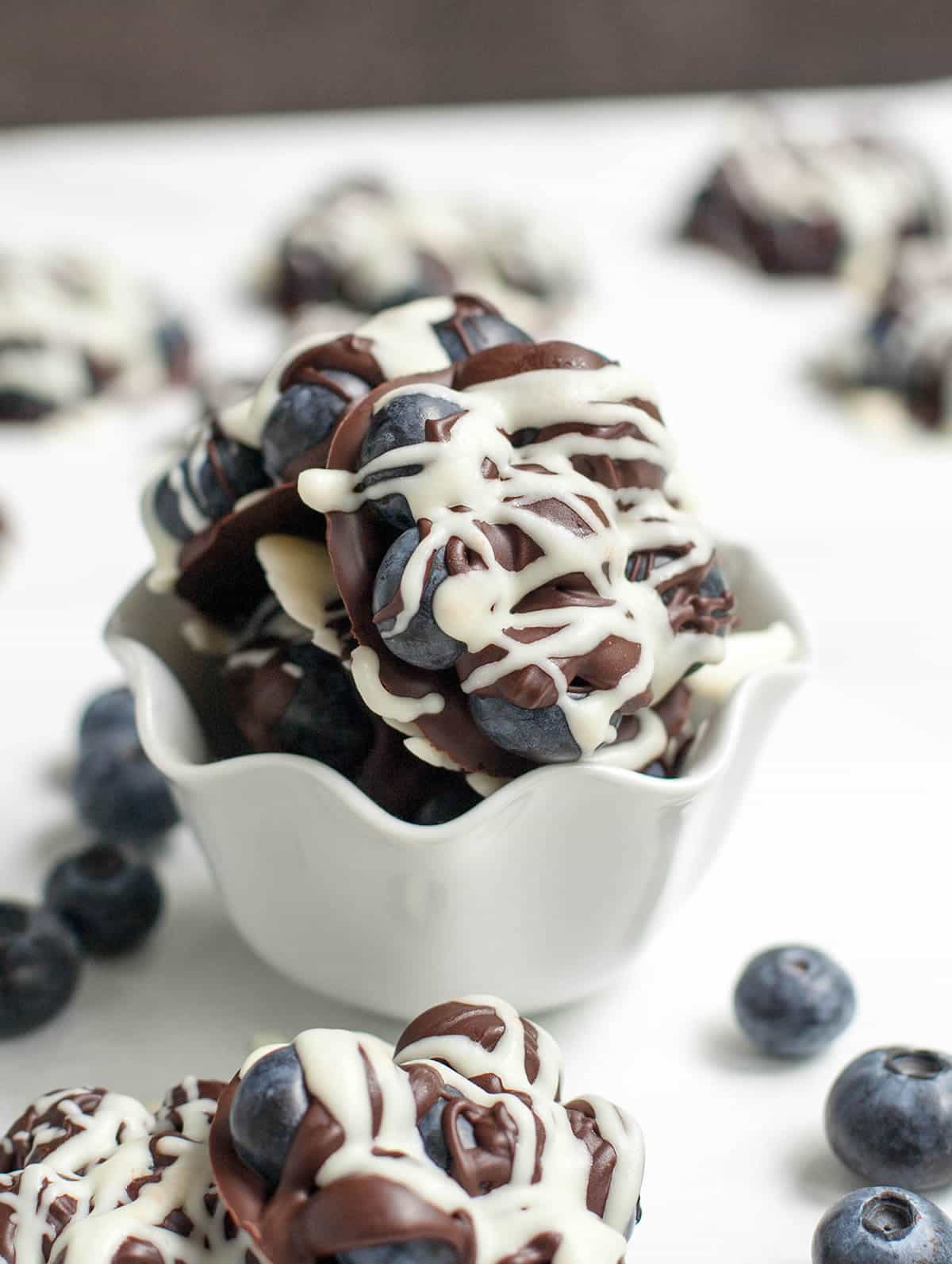 I popped the tray full of clusters into the refrigerator to set up so we could sample them. Now I know that cold chocolate doesn’t taste the same as room temperature or warm chocolate.

But fear not…what happens is that you bite into the cold cluster, juicy chilly berries burst open and the chocolate melts all around them letting all that flavor just bloom in your mouth. Yeah, they’re good… and practically refreshing.

These Chocolate Covered Blueberry Clusters were at least twice as good as the ones we had on the boardwalk. They’re pretty quick to make, even with spending the extra few minutes to place the blueberries on the discs.

(If you have kids, putting the blueberries on the discs is a great way to have them help.) I stored them in the refrigerator and they were a welcome sweet treat on the hottest of days.

They feel so much lighter and healthier (dark chocolate and fresh fruit, right?) than some of the richer sweets you could splurge on. And after the last couple of months, I’m all about putting an emphasis 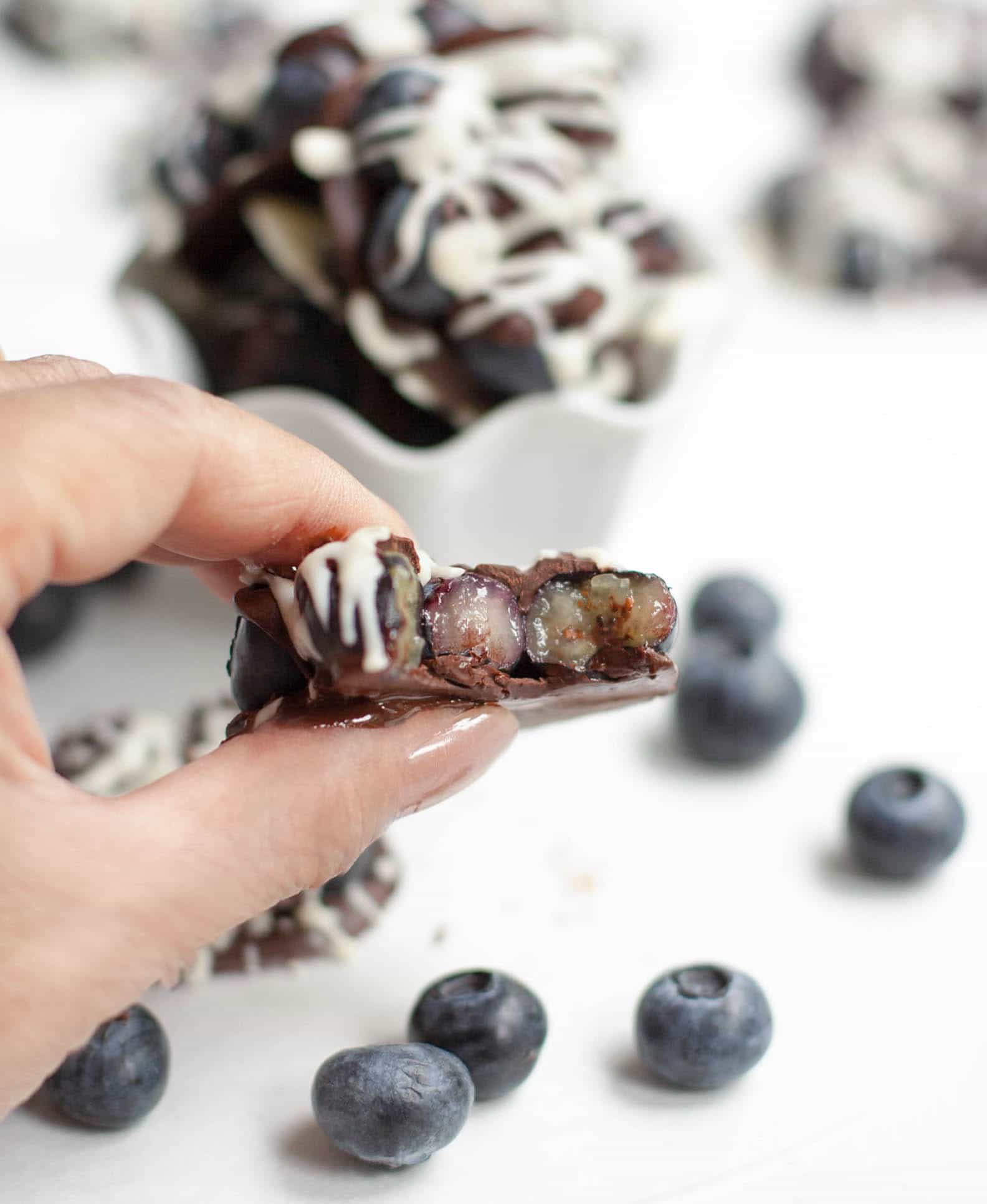 *Use your favorite chocolate. If you prefer the sweetness of milk chocolate, use that. If you hate white chocolate, omit it. I used Trader Joe's Dark Chocolate Bar and Ghiradelli White Chocolate Chips I'm giving you links so you know what they are, but ignore the prices. They're much less expensive in stores.

*Why melt 3/4 of the chocolate and then add the rest in? This is a short cut tempering process that raises and lowers the temperature of the chocolate without getting into a more complicated process. It's not perfect, but it works for me.

*To get a good drizzle, make sure your chocolate is fluid enough. That's what the shortening is for. You can add a bit more if your chocolate needs it. Use a fork to drizzle (I forgot to in my photos and continued on with my spoon) and start the drizzle before you get to the cluster. That will give you a nice even drizzles without pooling.

[email protected] A Dash of Cinnamon

As I was reading this I realized I don' t think I've ever tried covering blueberries in chocolate either, but have done so with plenty of other things! These look awesome though. Love how you put them on chocolate saucers

They're so good! I think I might like them better than chocolate covered strawberries...and I love those, so that's saying something!