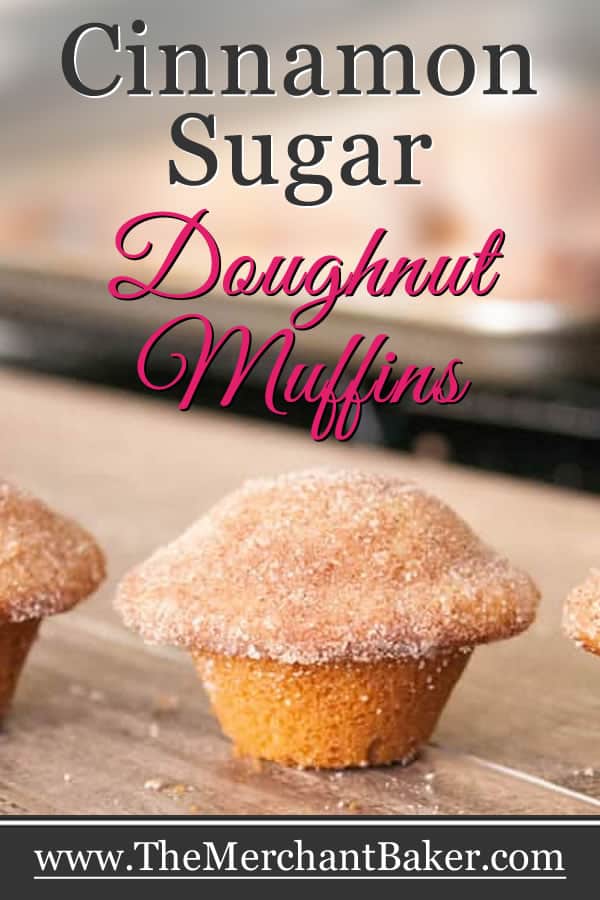 Cinnamon Sugar Doughnut Muffins have the texture and taste of baked doughnuts. After baking, the tops are dipped in melted butter and then rolled in cinnamon sugar.  It’s the perfect muffin for breakfast or for a sweet and delicious snack. They are irresistible!

I’ve made a delightful little treat for you today.

Actually, I made this delightful little treat for my son’s Fall Festival celebration at school last week.

The celebration was scheduled for the morning, so instead of cupcakes, I made Cinnamon Sugar Doughnut Muffins.

I’ll admit I was a bit disappointed that I didn’t get to make some Halloween oriented treat like candy corn shaped cookies, or mummy, ghost or spider cupcakes as I have in the past.

But these little muffins were a huge hit with the kids.

There wasn’t a single one left over.

What is a doughnut muffin?

So what is a doughnut muffin?  It’s basically cake doughnut batter baked in a muffin pan.

The warm muffin is then dipped in melted butter and rolled in cinnamon sugar.

When you bite into it, it tastes just like a cinnamon sugar cake doughnut. 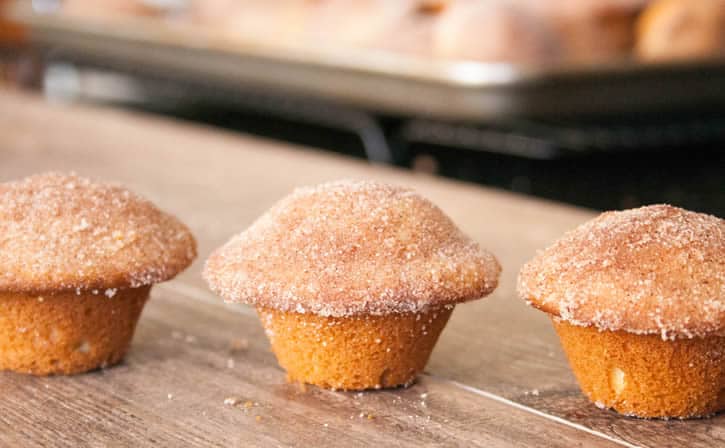 So, I figure you’re thinking one of two things right now.  The first is, “Wow, that sounds delicious!”

The second is, “So, you didn’t make cupcakes for a morning party because it was too much like dessert, but you made these buttery sugary treats instead?”

I think we all know that doughnuts, Danish pastries, muffins and quick breads are just dessert masquerading as breakfast food.  Perfect for a morning kid party. 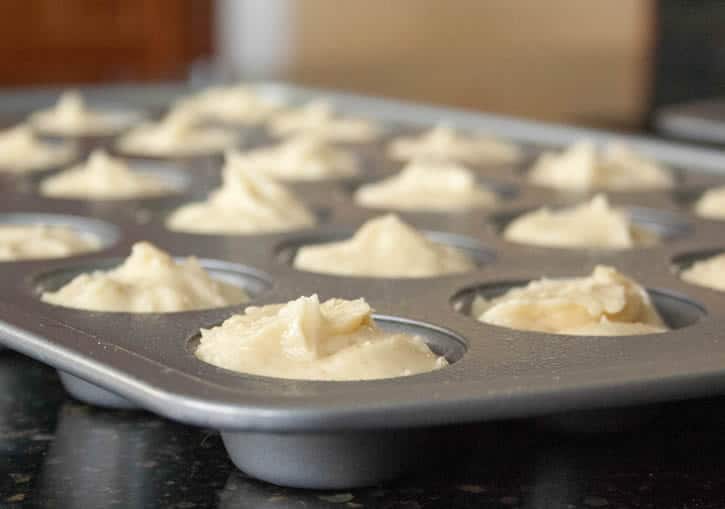 Why are doughnut muffins such a wonderful idea?  Most people never think of making doughnuts at home, yet make muffins frequently.

Not everyone has a doughnut pan and it’s much easier to fill a muffin pan than it is to fill a doughnut pan.  Speaking of filling the pan, take a good look at my pictures.

When I was setting up my little muffins on the tray for the treat table, one of the moms said, “Look how cute!  They look like mushrooms!”  (Yep, that’s EXACTLY what I was going for, now missing my little ghost/spider/mummy cupcakes even more.)

If you don’t want your muffins to look like little mushrooms (as cute as that may be) don’t fill your pan as much as I did.

The original recipe recommends filling them completely to the top and I held back just a bit from that and pulled some of the batter out of each cup, but they still rose higher than I expected and ran over. 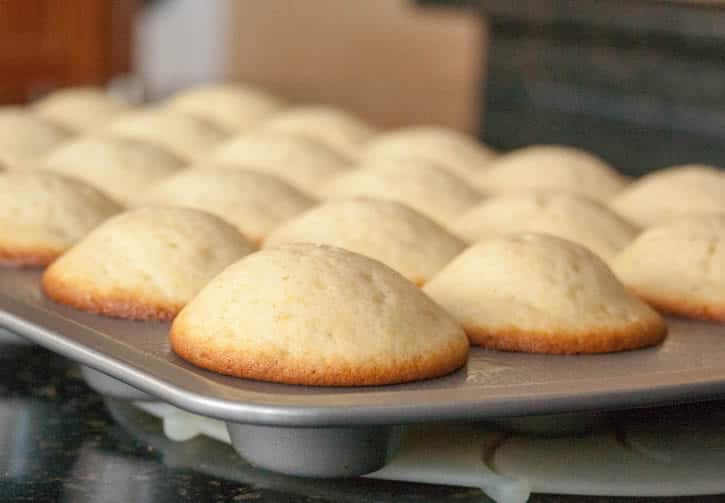 Thankfully, the lip of the muffin (mushroom?) did not stick to the pan and they all popped out beautifully.

I got 40 mini muffins from this recipe.  If I had put a bit less batter in each cup, I think I would have yielded a solid 48 or possibly more.

Now, the picture of the baked muffins looks a bit over baked and I could have easily cut the baking time, but I think I was looking for a more golden appearance on top?

I forgot that it’s the cinnamon sugar topping that actually adds all that color. I was worried that I would have to start over but to my surprise, they were still moist and yummy (phew!)

I’m sharing the pictures so that you know what to look for.  I would probably bake them about two minutes less and not let them get quite so golden around the edges next time. 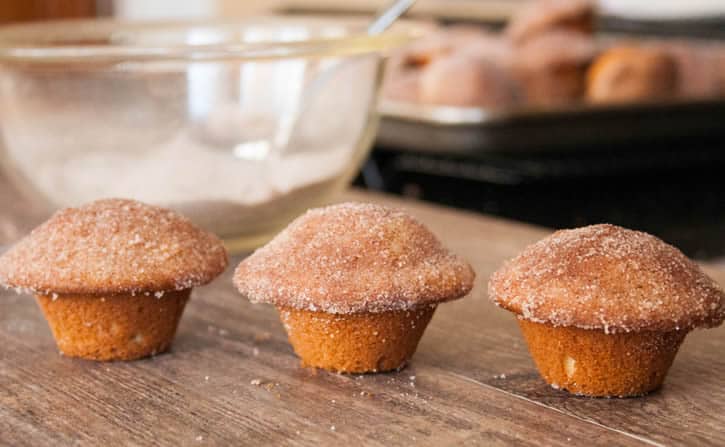 You might have noticed that there IS a definite bonus to the larger muffin cap. You get more surface area for the buttery cinnamon sugar topping. 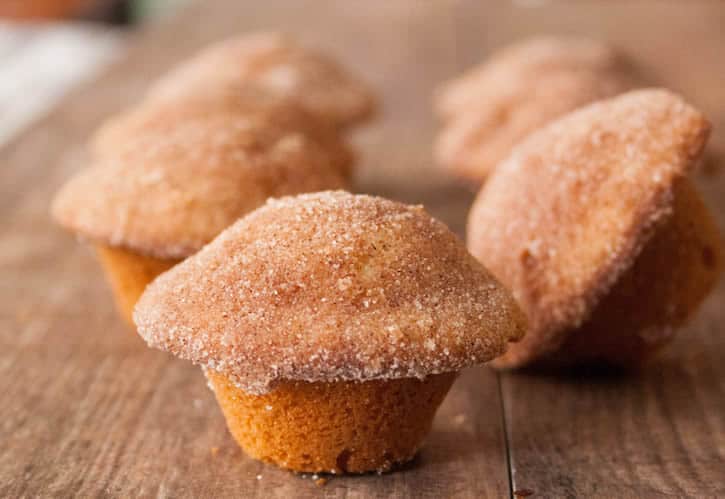 That’s a bonus worth thinking about…

Some of the measurements may look strange because they are half the original recipe. If you want to make a larger batch, this recipe definitely doubles. I made mini muffins and I'm glad I did. They are sweet and a bit rich, so mini muffins offer some sense of portion control. You can make them in regular size muffin tins, just adjust your time accordingly. I would check them at 15 to see how they are progressing, but they may take up to 20-25 minutes. Store covered at room temperature. I baked mine the night before and they were still great the next day.

Just tried it, thank you so much, the flavour, taste and smell cinnamon made it complete

I'm so happy you enjoyed them!

I made them and didnt really like them much sorry.

Katarina, I'm sorry you didn't enjoy them. They are well loved by many. If you like cinnamon sugar donuts, this is basically the same flavor and texture, just in muffin form.

Looks delicious! I will make them tonight for sure! But I didn't understand the amount of milk? Is the 1/2+1/3 for the same amount of the recipe you post or for the half of it ? Because i want to make half of this amonut ( 1 egg) , so what amount of milk do i need? Thank you

The recipe, as it is written, is already half of the original recipe. If you want to cut it in half again, then, for the milk, you'll need to divide both the 1/2 cup and the 1/3 cup in half again. That would give you 1/4 cup + 2 Tablespoons + 2 teaspoons, if you want to be exact. I might just round up a little and do 1/4 cup + 3 Tablespoons or a total of 7 Tablespoons. (For the math geeks, 1/4 cup= 4 Tablespoons and 1 Tablespoon = 3 teaspoons) I hope that helps!

[…] While the muffins are still warm, dip the tops of each into the butter, then roll into the sugar. You may also choose to coat every side of the muffin in the butter and sugar mixture, but I found just dipping the tops was perfect for me. Recipe source: The Merchant Baker […]

I want to make these for my daughter...I'm always buying cinnamon sugar donuts for her. These would be way better-homemade. :)

Veronica, they are sooo good made fresh and homemade!