Sour Cream Chive Biscuits. Savory biscuits that are light and fluffy with the mild tang of sour cream that pairs so perfectly with fresh chives. 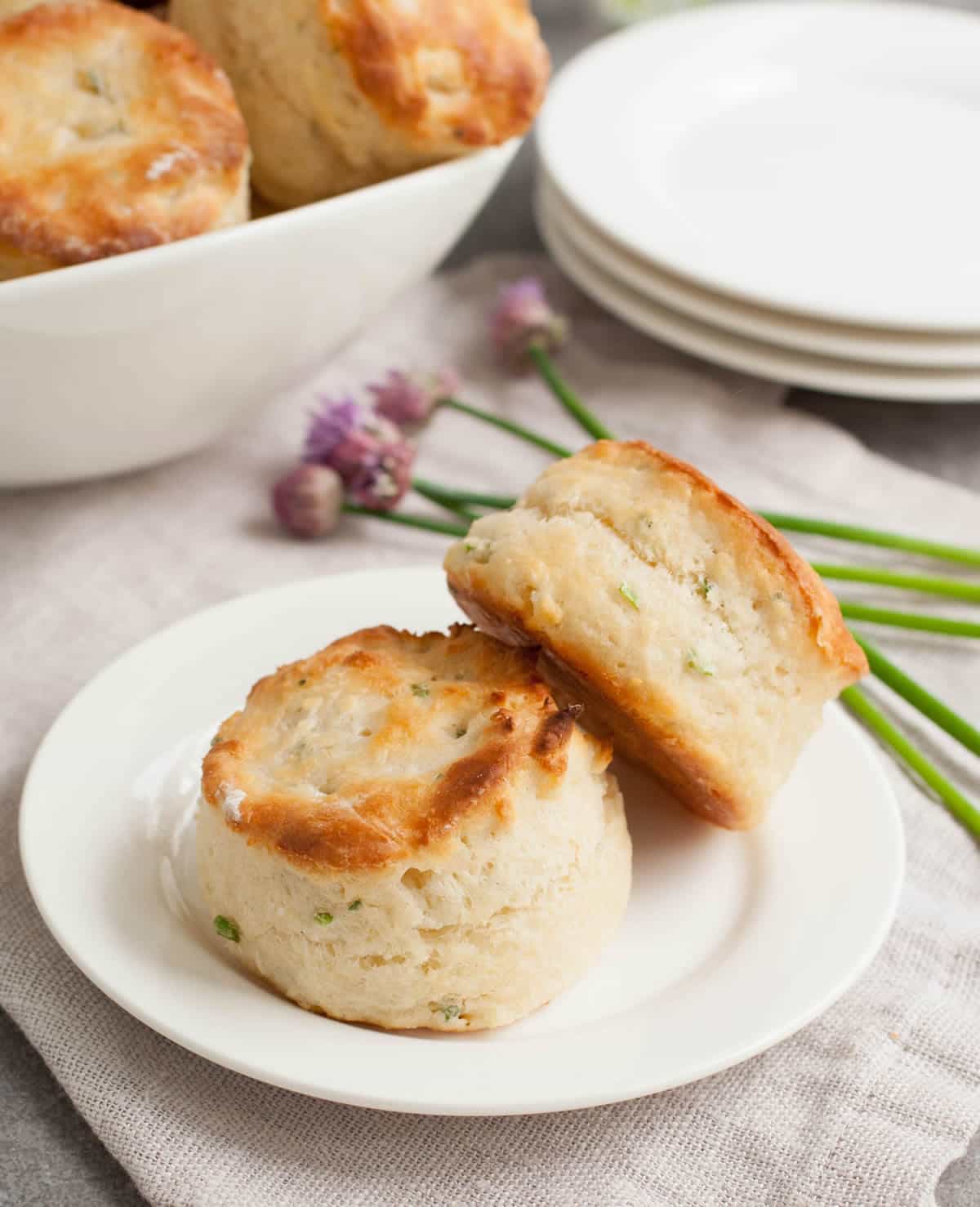 When I saw we had chives in our CSA basked a couple of weeks back, I was thrilled. I love fresh chives. They are mandatory when I make baked potatoes.

My kids are completely on board with that. I always have to make sure I chop up enough because those chives get generously spooned on top of hot buttery spuds.

Then when I opened up our weekly CSA box and saw the chive BLOSSOMS? Those pretty purple flowers were gracefully sitting atop the longest, most graceful chive stems I had ever seen! I was so excited!

I knew I had to make something so I could use the pretty blossoms in a photo shoot. #propportunities 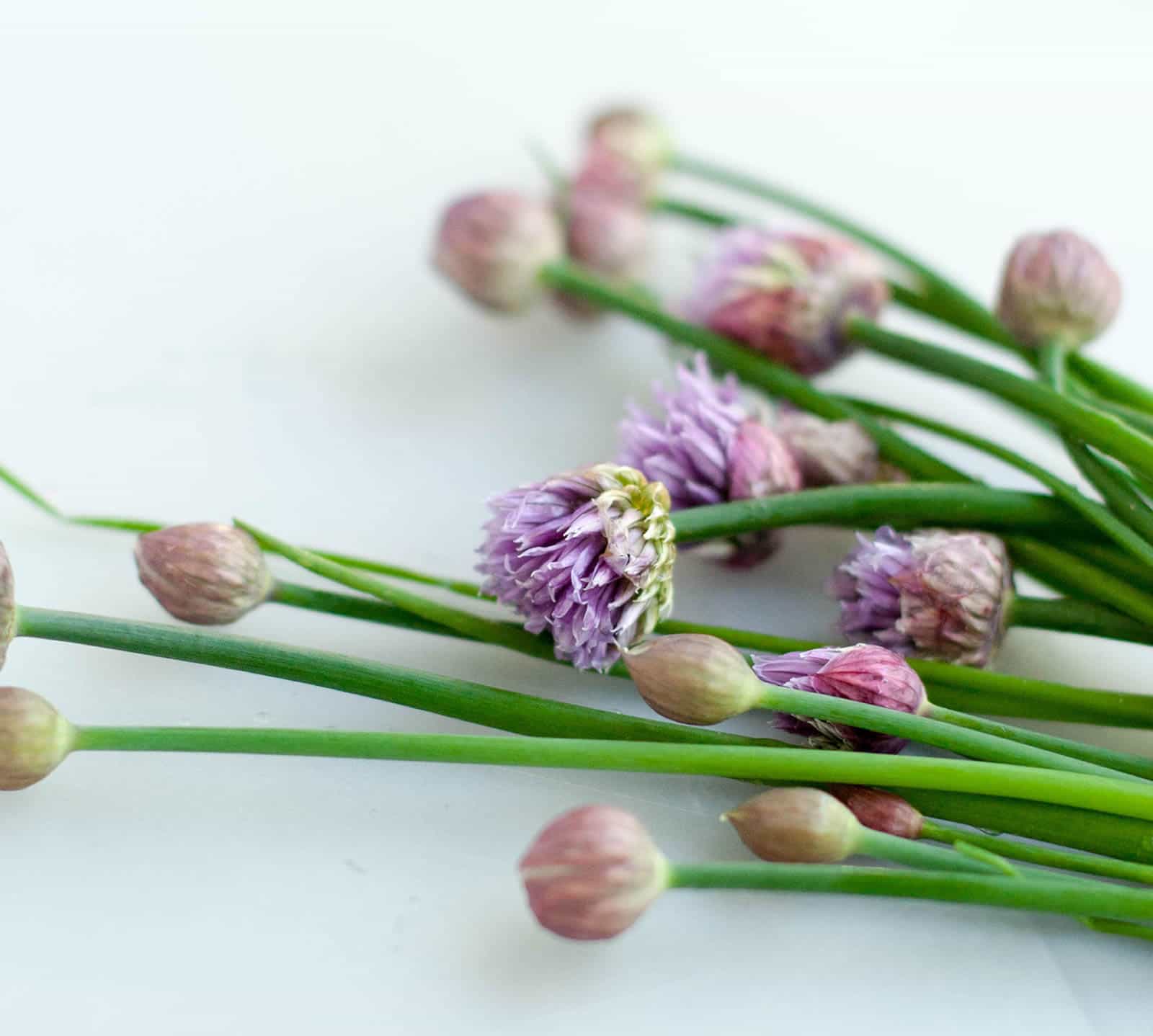 There’s one thing about creativity. You can’t force it. If someone says, “Wash the dishes,” and your head really isn’t into it, (okay, I admit it, my head is never into it) you can still wash the dishes. You can even do it well, as long as you put in the effort. 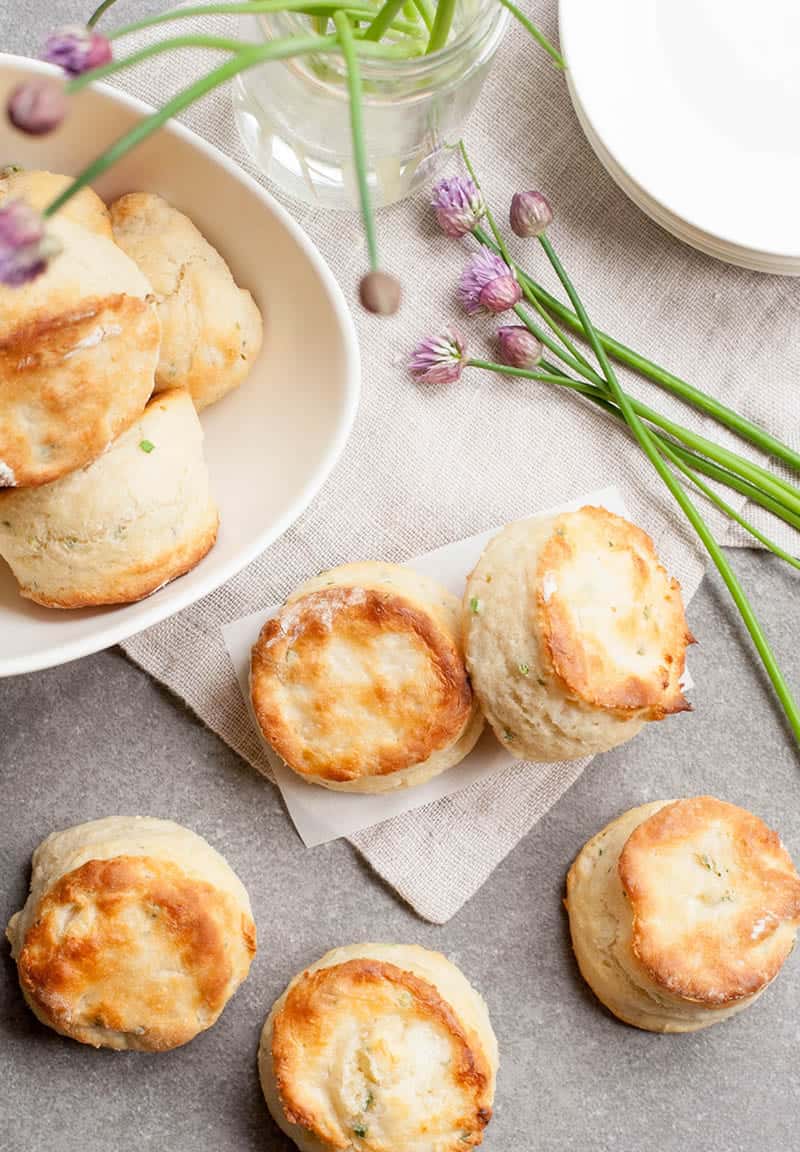 Creativity is a horse of a different color. If someone says, “Here, take these things and make them pretty.” If your creativity is flowing, then it’s almost too easy. Ideas are coming from everywhere and they are plenty. 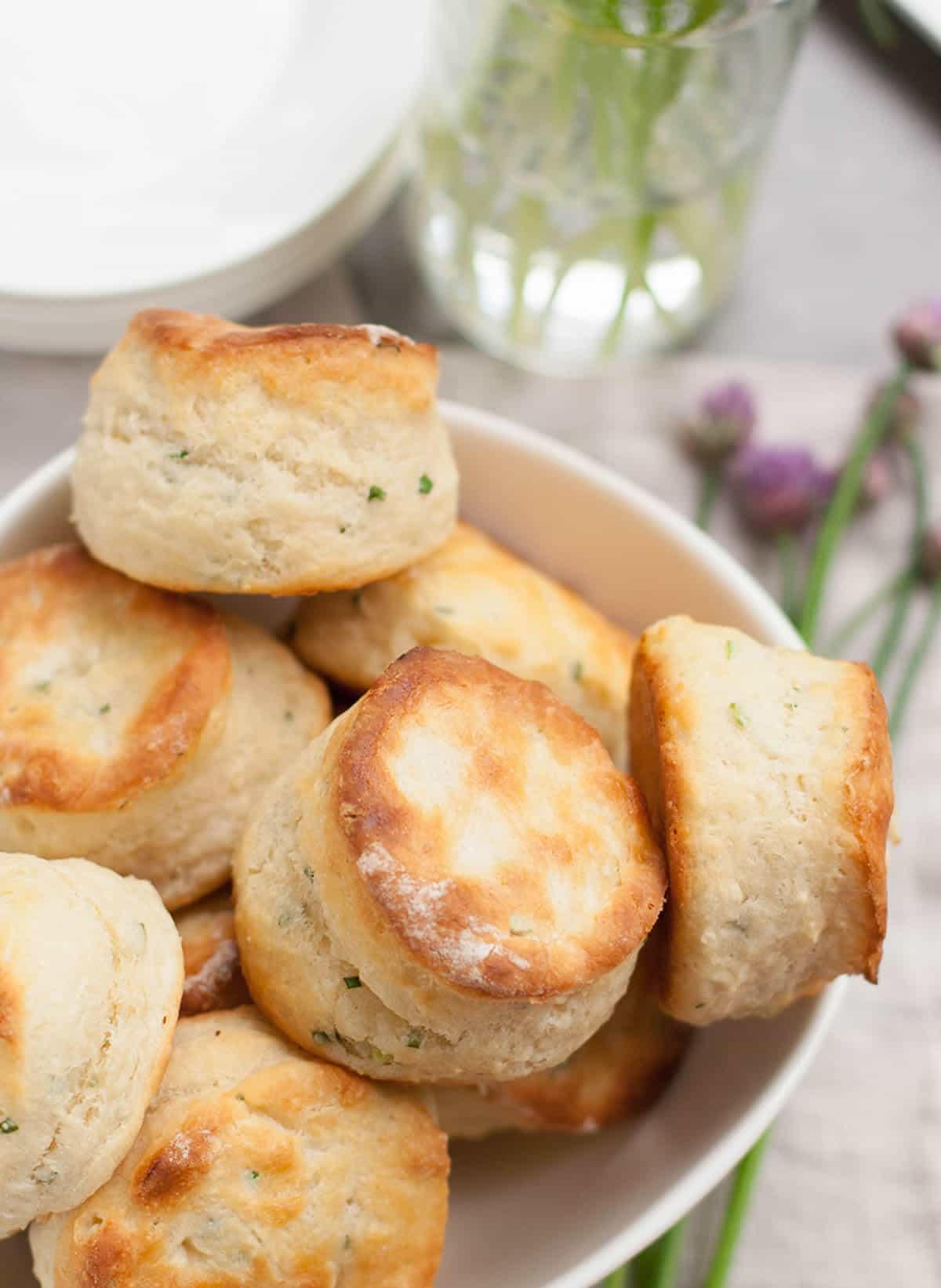 Thankfully, it doesn’t happen often. Usually, I can’t stop coming up with ideas. With today’s post, just seeing those pretty purple blossoms inspired me to create a recipe stat and shoot it.

I’m a biscuit loving fool so I thought I’d try swapping out my beloved buttermilk in my favorite Fluffy Buttermilk Biscuits for sour cream. Those biscuits are a fave-oh-fave with butter and honey at breakfast.

I love a variation of them as Cheddar Buttermilk Biscuits served with soup.

Adding another savory flavor to my biscuit arsenal certainly seemed in order now that I had these lovely chives to work with. 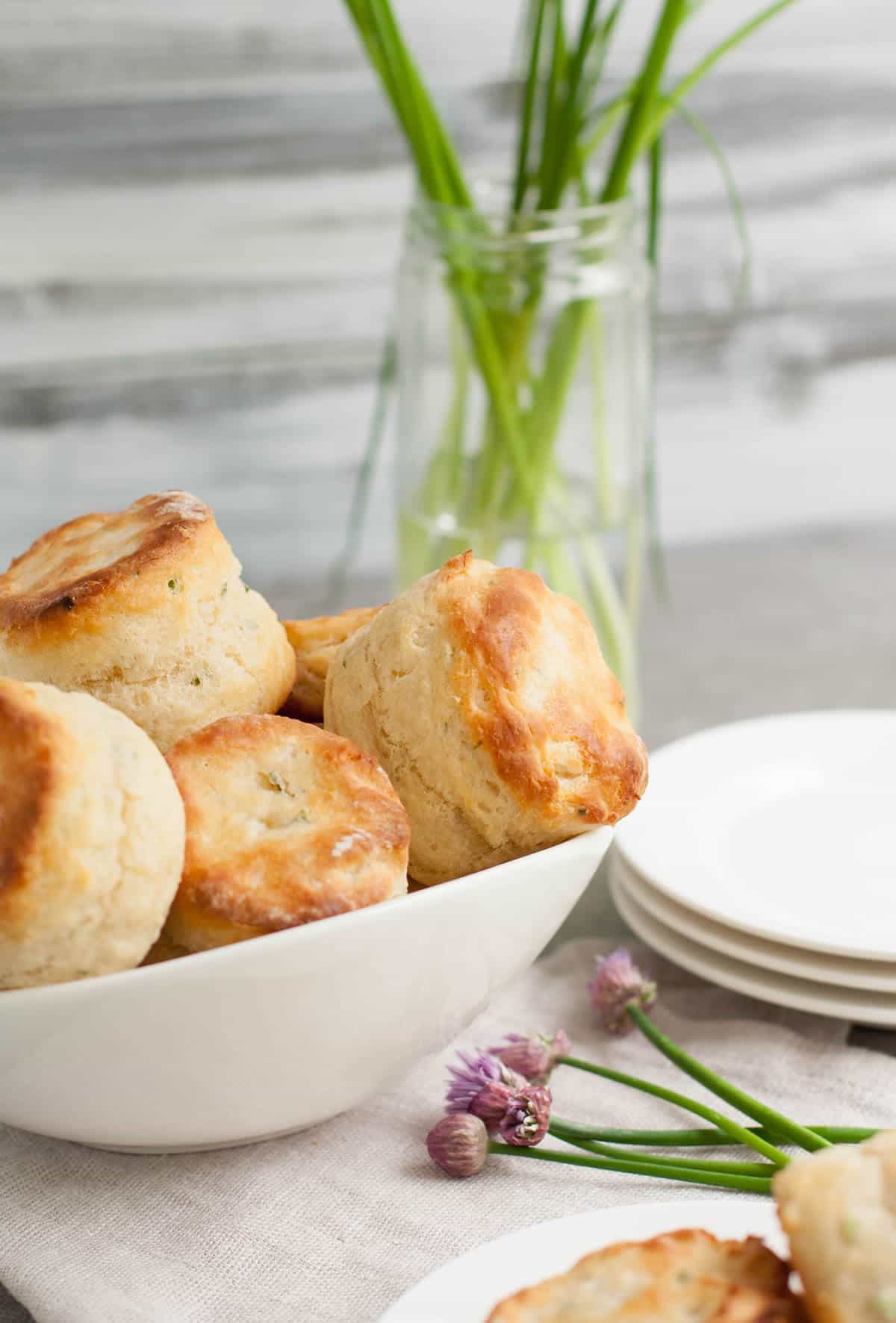 Sour cream is an easy substitute for the buttermilk. It has the lovely tang of buttermilk but with slightly more richness. Sour Cream Chive Biscuits are as wonderful as the original biscuit, but now in a new savory flavor that would be so delicious for breakfast with some eggs. (Ooh! Make a breakfast sandwich!)

Or accompanying your favorite soup or as a fresh hot bread choice for dinner or, or, to round out a main dish salad!

They would even be a great sub for the biscuits I used in Creamy Chicken and Biscuits! 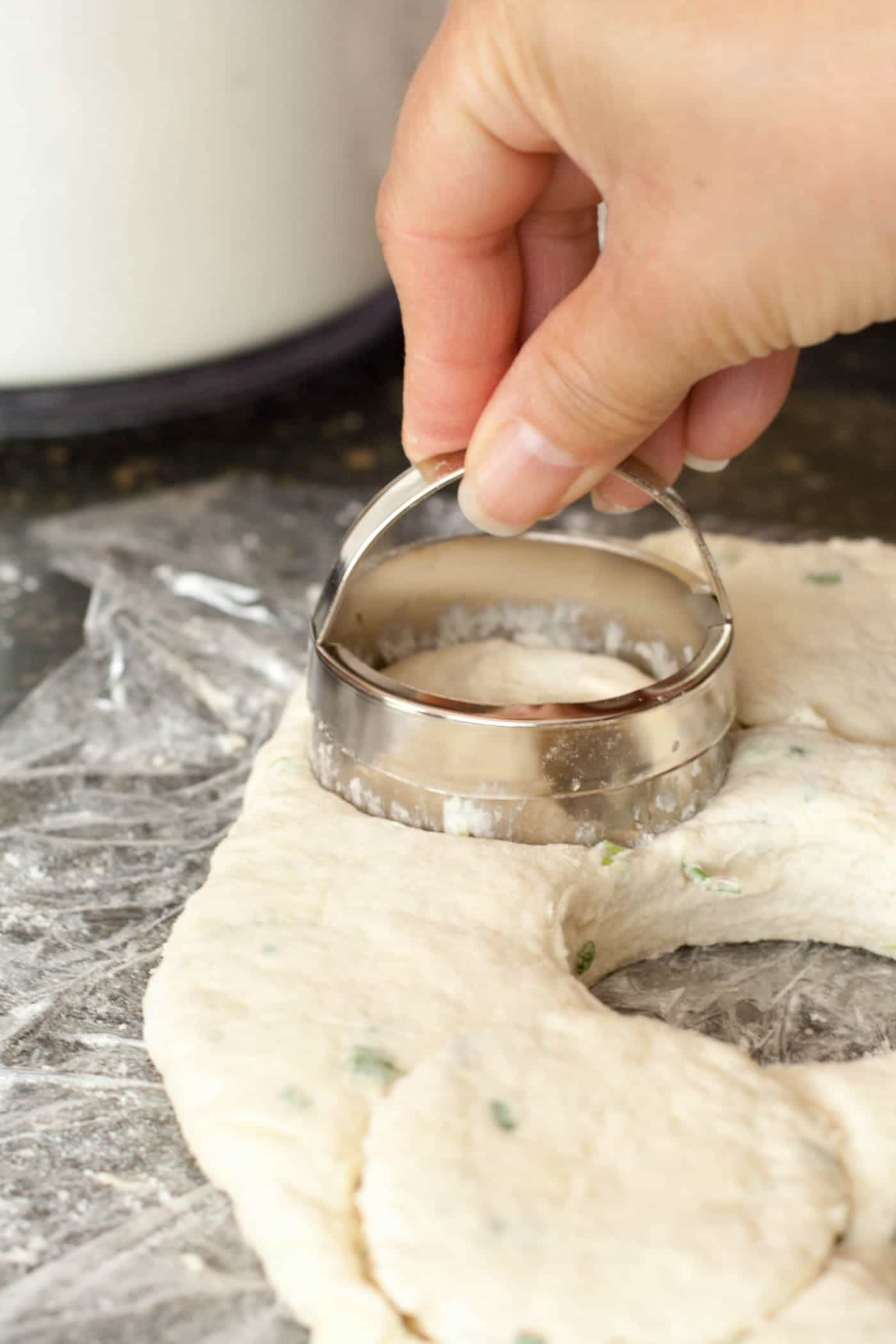 Now let’s get to the controversial part of this post…the cutting. I swear swear swear by cutting biscuits into squares. Every single biscuit post I have is cut into squares. Why? Because the first cutting is the BEST cutting.

If you use round cutters and have scraps, that second rolling never rises as tall as the first and it’s never as fluffy as the first.

I spent a lot of time figuring out all the secrets to some great buttermilk biscuits and cutting them only once is one of them. (Tip: Read Fluffy Buttermilk Biscuits as your primer before making these biscuits.) 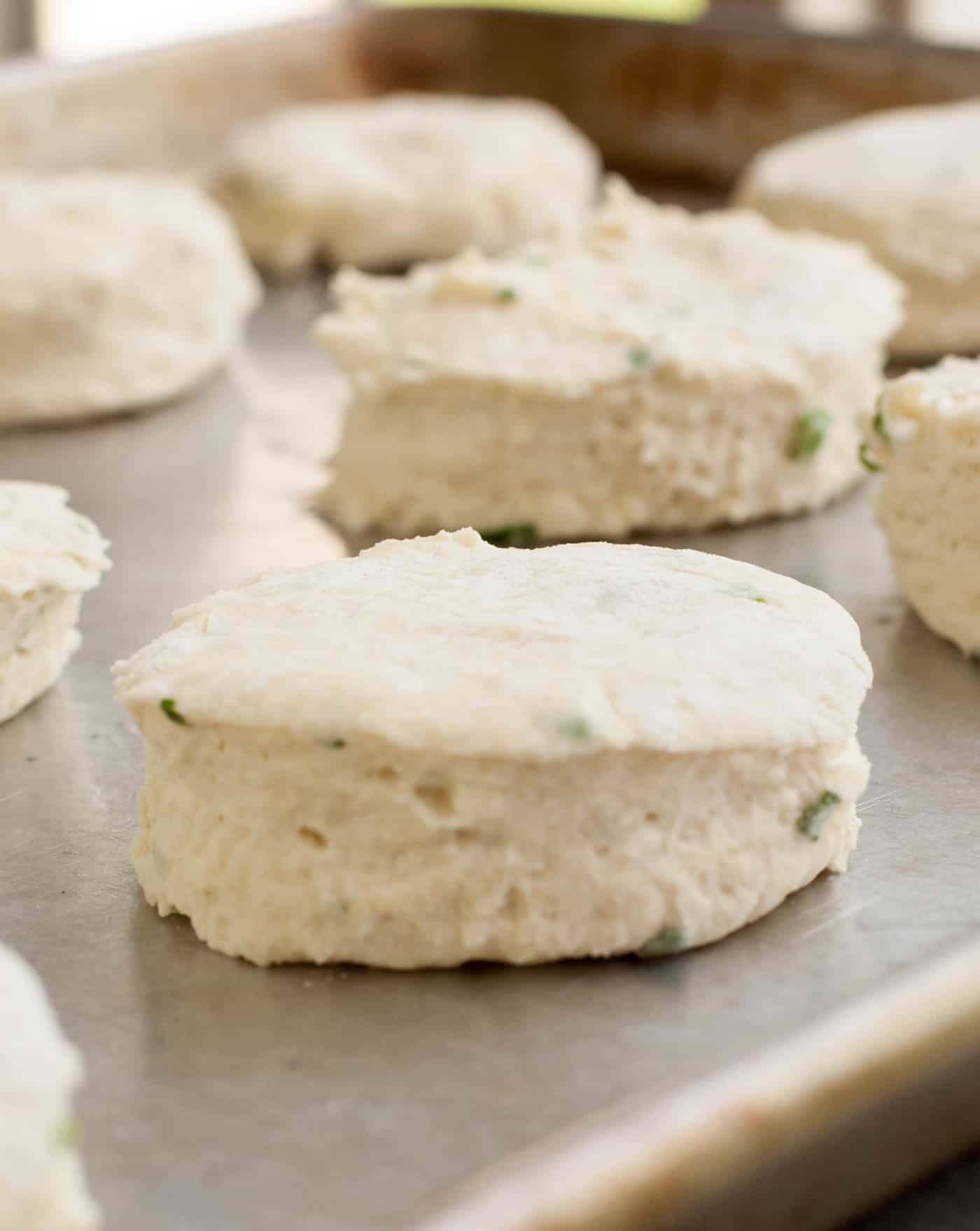 So why did I cut my Sour Cream Chive Biscuits into rounds this time? Well, I thought you  might be tired of looking at square biscuits.

I wanted to shake it up a little, you know…let the creativity floooowwww….(I also broke that one cut rule for my Strawberry Shortcake post.)

I liked shooting the round biscuits for a change. Of course, the biscuits that were from the second rolling/cutting were not as good as the first.

Not that anyone would have turned one of them down, but they simply never have all the lofty qualities of that first magical roll and they are never the first ones chosen from the batch. 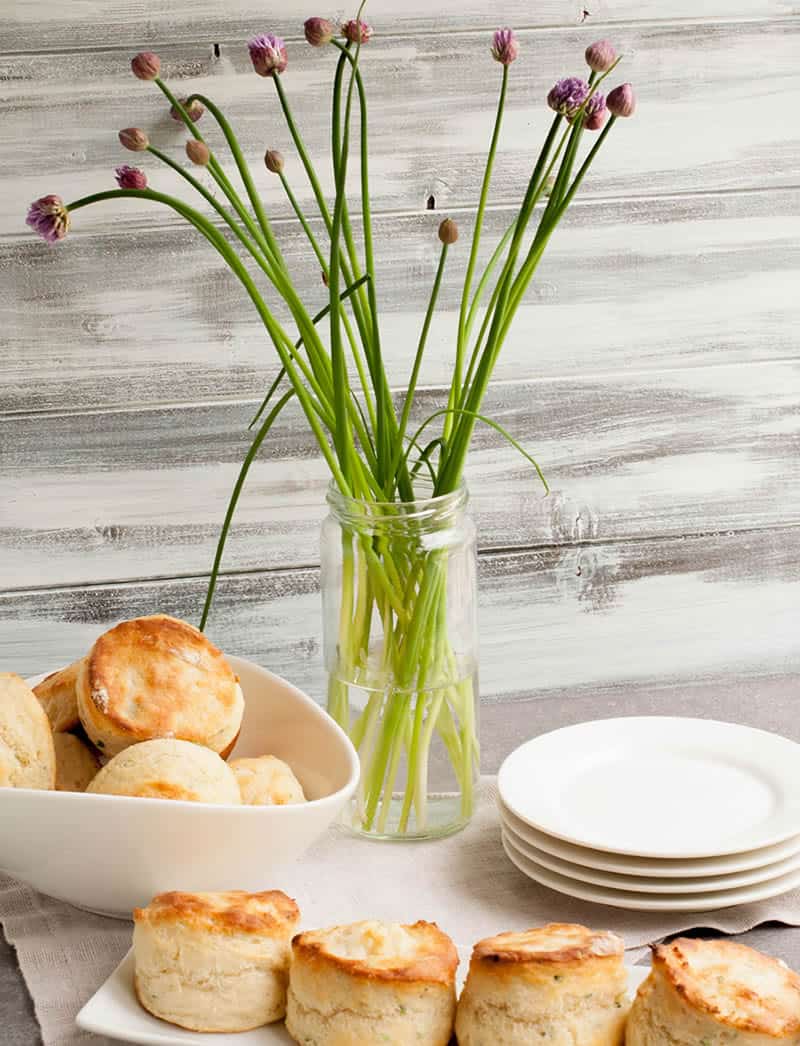 I have a friend who thinks it’s sacrilege not to cut biscuits into rounds. I get it. I mean, how often do you see a square hamburger bun?

I’ll always leave myself the freedom to cut rounds for a pretty post or if I’m making something where I specifically want that presentation.

Like today, my creativity was feeling like the biscuits should be round. But when I’m making biscuits every day at home, even these Sour Cream Chive Biscuits…it’s almost always gonna be hipper, loftier, and fluffier… 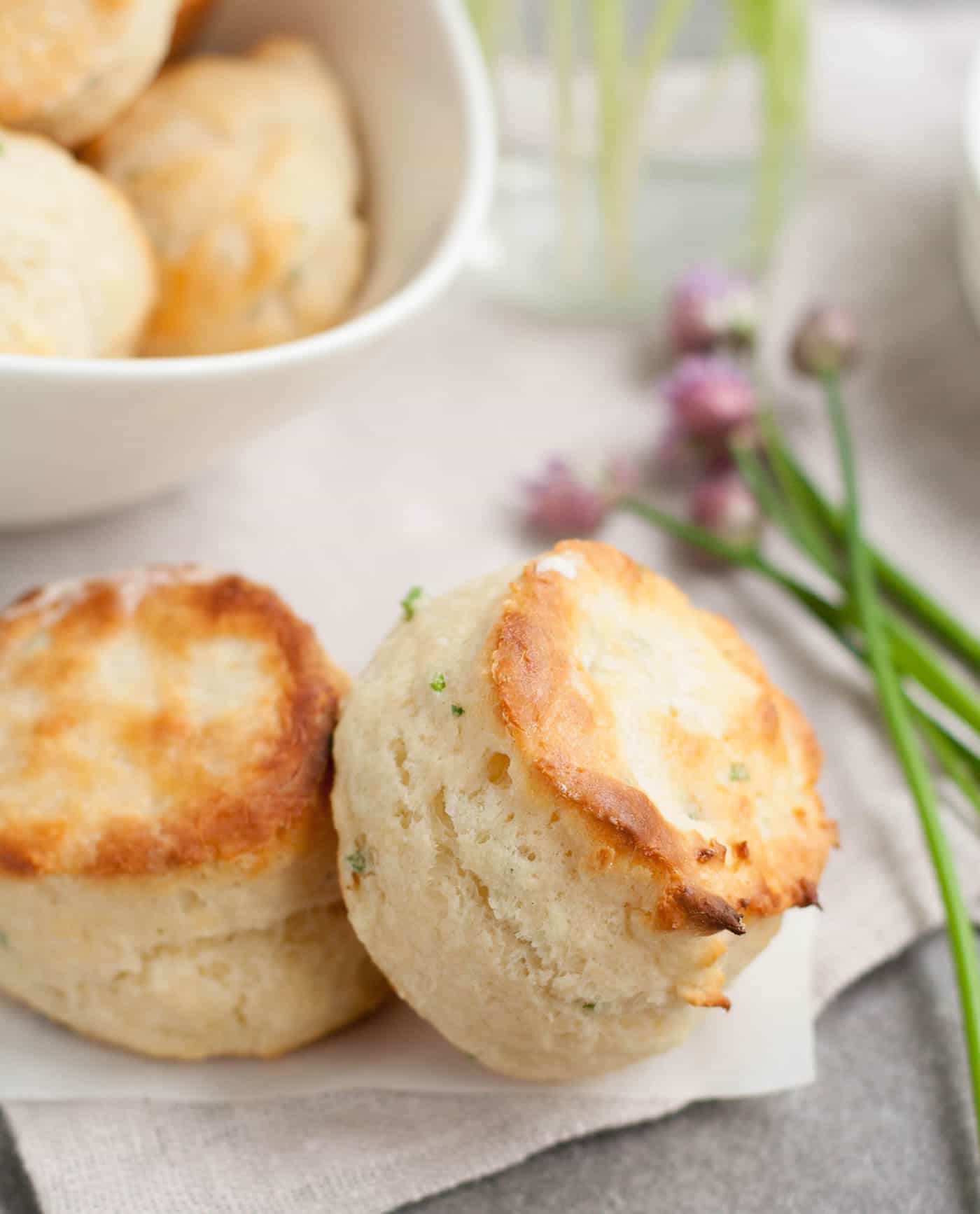 Servings 9 -12 biscuits depending on what size you cut them

*Biscuits can be stored overnight at room temperature, wrapped lightly in foil. Even though they are best the first day, they reheat nicely in a toaster oven.

*I use coarse kosher salt which ends up adding less salt for the same measurement because it is coarse. If you use table salt as well as salted butter, you may want to reduce the salt to 1/2 teaspoon.

*While I decided to use a round cutter for this post, cutting and rerolling scraps is not my preferred method. I prefer patting them into a square about 1" thick and cutting them into 9 big pieces (cutting lines like a tic tac toe board.) With that method there is no re-rolling of scraps and every biscuit has the benefit of the loft and rise of the first roll.

*Save yourself some dishes. I keep the bowl I mixed the sour cream and milk in off to the side until it's time to brush the tops. Sometimes there's enough sour cream bits in the bowl for me to just add a touch of milk and sop all of it up with my brush. If not, I just add a bit more to the bowl.

Hi again! I love your site and recipes and share them with my daughters. I also wanted to tell you I belong to Just A Pinch and it is a great site for recipes and a great way to share yours! You can add a recipe box button to your site and all someone has to do is click it and it will save your recipe to their box! I love the site and they feature blogger recipes all the time and make sure the recipes stay with the author of them!

Thanks for the tip! I'll be sure to check it out!

I made these and oh wow they were amazing!! I have used mayo in savory biscuits but the sour cream is the way to go! I am going to use that in place of mayo in any of my recipes now!

Hi Gina, So happy you loved them! I've never tried mayo in biscuits before. Glad to know sour cream works even better. Thanks for the great feedback!

I'm totally with you on the first cutting is the BEST cutting. Thanks for sharing your recipe. They looked really fluffy and yummy. I'm going to make these soon. You take great pictures of them too.

Thanks, Jen! I figure if I'm going to make biscuits, they might as well all be from the BEST cutting :)