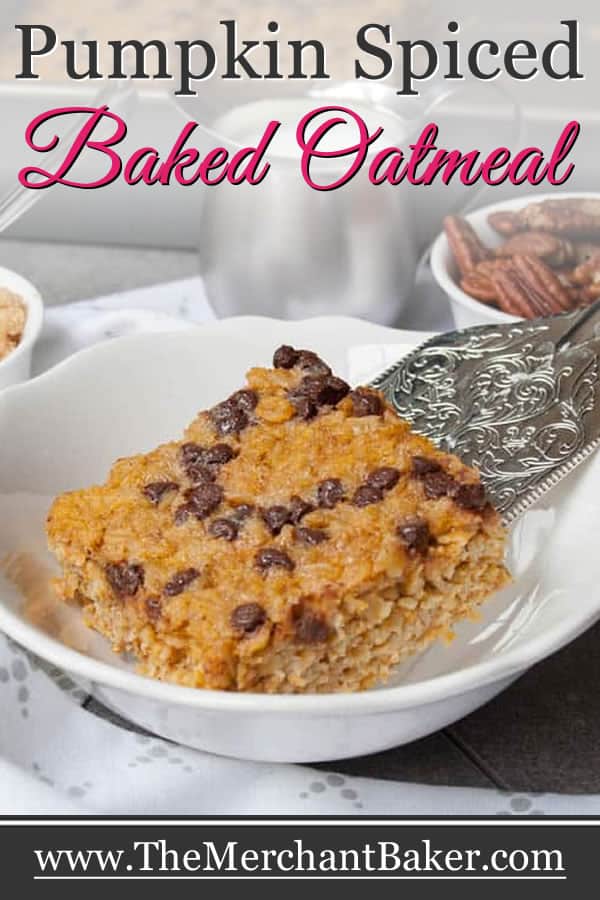 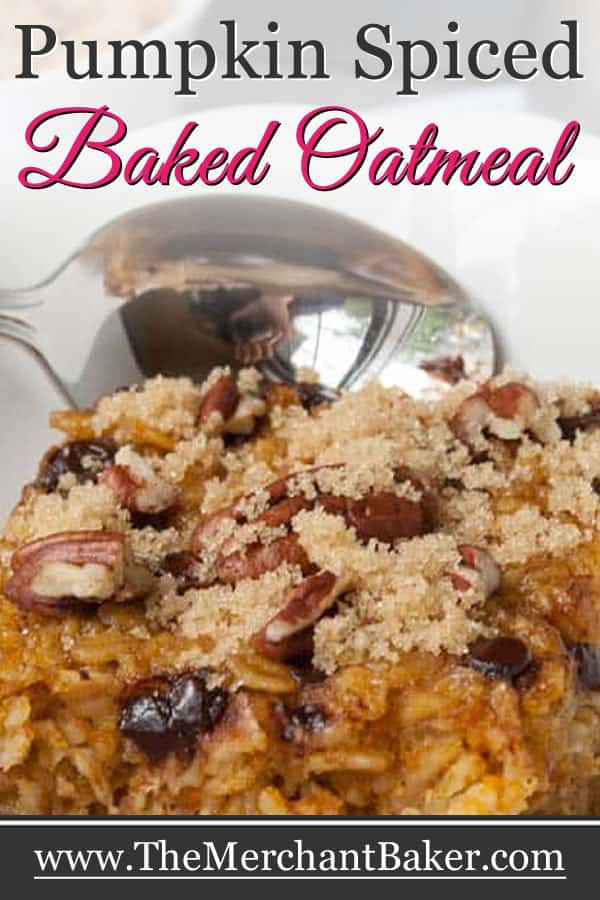 First things first. This is not a cake. 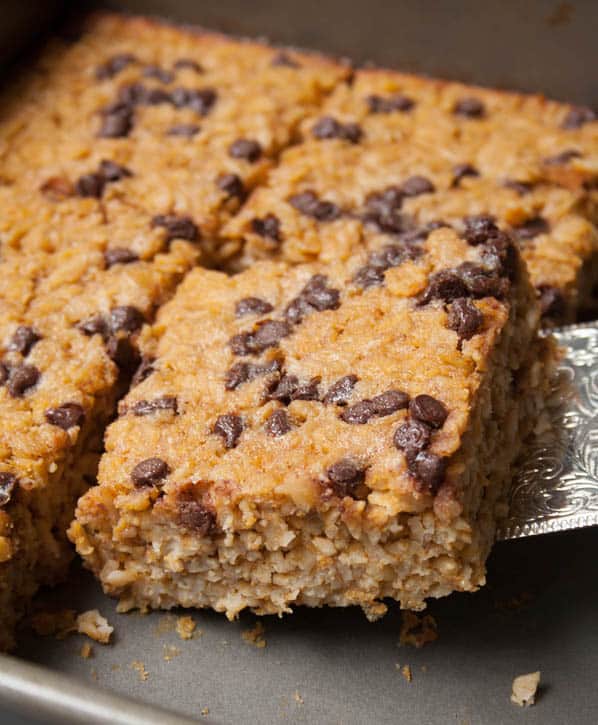 It might be cut into nice little squares, and look like a cute little snack cake, but one bite and you’ll know that it’s oatmeal, Pumpkin Spice Baked Oatmeal. That’s right, oatmeal..that’s baked…and of the pumpkin spice variety. Yep, I’m jumping onto the now ubiquitous pumpkin spice latte trend, commonly known as PSL. I’m just leaving off the “L”, but feel free to have a cup of coffee with it and we’ll call it even :) 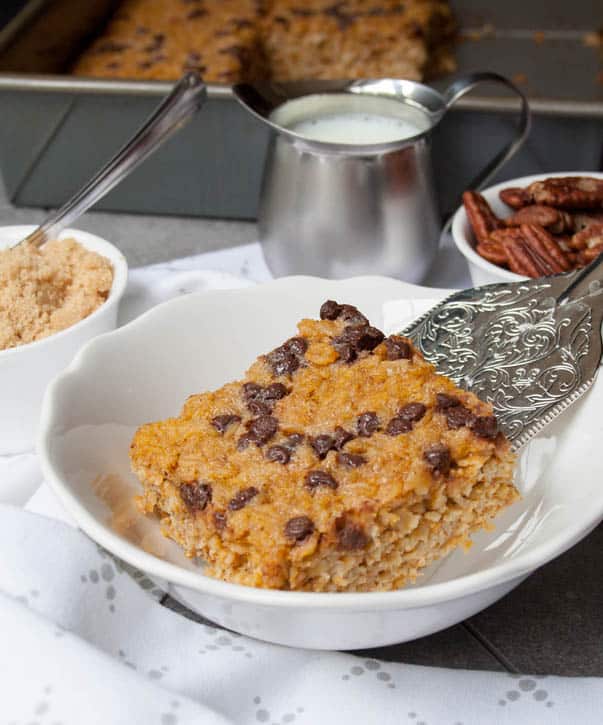 Seriously, the real thing I’m jumping on is a breakfast I can make ahead. And, not only breakfast that I can make ahead, but one that makes enough for more than one meal; I like to leverage my time in the kitchen whenever possible. 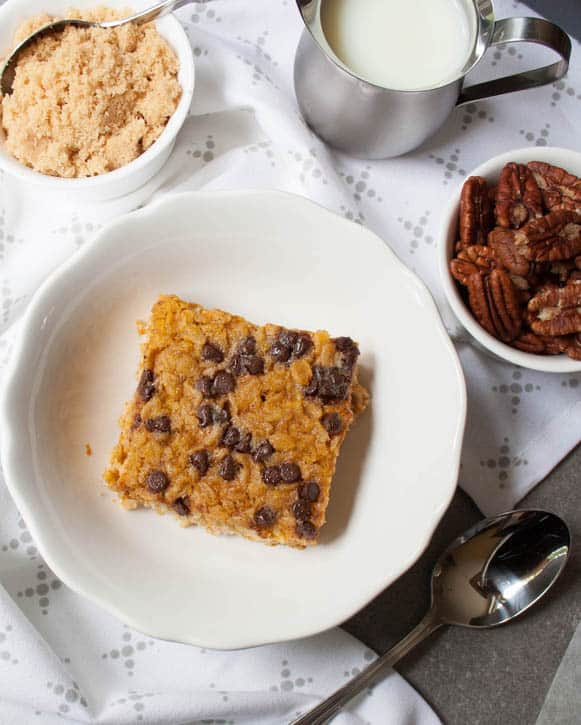 Somehow, I’ve evolved to being a mom who makes hot breakfasts about 95% of the time.  I think I ate cold cereal and skim milk for most of my single life and one day, I had just had enough. As much as I had loved it for those years, I was o-v-e-r it. That complicated things since cereal and milk is just about the fastest breakfast you can make and I only had myself to worry about back then, so it was particularly fast. 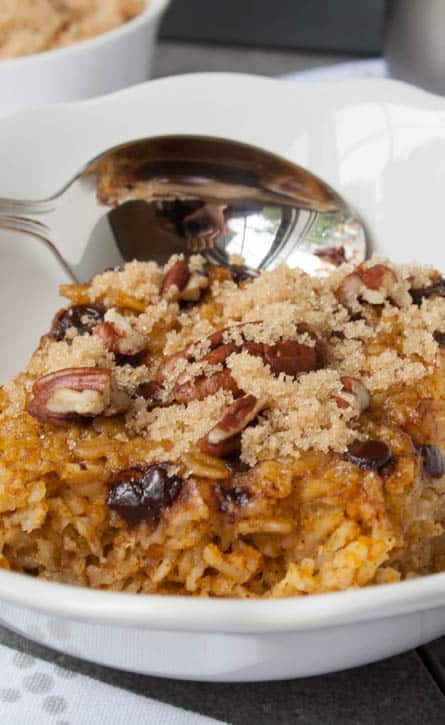 Then I got married and had kids. I had to figure out what healthy choices to feed my family, and over time, that turned into breakfasts like Spinach Feta Egg White Cups, Pumpkin Waffles, Whole Wheat Pancakes or Avocado Toast with scrambled eggs. What do these all have in common? I can make almost all of them ahead of time and either refrigerate or freeze them for a future meal. (Except the avocado toast and eggs…that can’t be made ahead and is quick enough that it doesn’t need to. ) 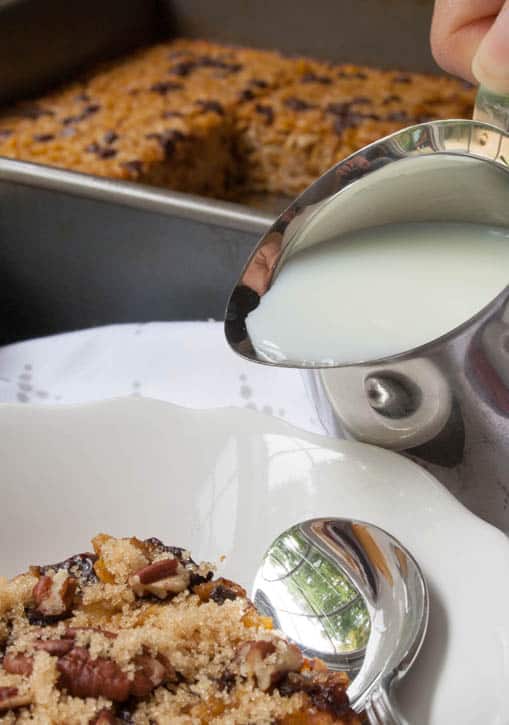 In the summer, I love to make muesli, which is a refrigerator oatmeal that is creamy, cold and perfect on a hot summer morning. It’s super fast to make ahead and there are a million flavor options. But now that it’s fall, I like to transition to a warmer oatmeal choice, which is where this Pumpkin Spice Baked Oatmeal enters the picture. I wanted to see how it would work if I made it ahead of time and just warmed it up in the morning. I don’t know about you, but I don’t have time to mix something up and bake it for 35 minutes during the week when everyone’s just trying to get out of the house on time.

So, I baked it the night before and decided to make it in one of my family’s favorite flavors, pumpkin. I’m not even going to say a fall flavor, because we really do eat pumpkin year ’round. We love the flavor of pumpkin, but I also like the nice nutritional bonus it adds to the deal.  Add that to the fiber rich oats and the protein in the eggs and milk. I even used olive oil here instead of melted butter (which you can sub if you wish.) Together they make for a delicious, hearty and healthy breakfast. 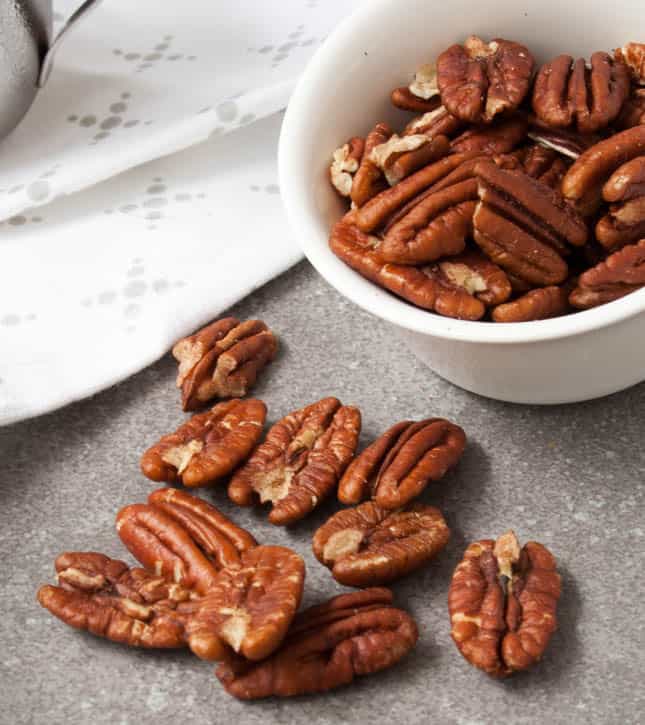 The next morning, I sliced it up, and did a quick reheat in the microwave. (And yes, I had enough leftover for the next morning as well! Woohoo!)  I put out milk, pecans (extra protein:) and brown sugar, honey and maple syrup for anyone that wanted additional sweetness, although it doesn’t really need it and I prefer to keep sugar at a minimum for breakfast anyway. My husband went for the maple syrup, but my kids just ate it with milk before they even knew there were some extra sweetness options. I think I had them locked in once they saw the chocolate chips on top.  Or, maybe they just thought they were getting cake for breakfast. 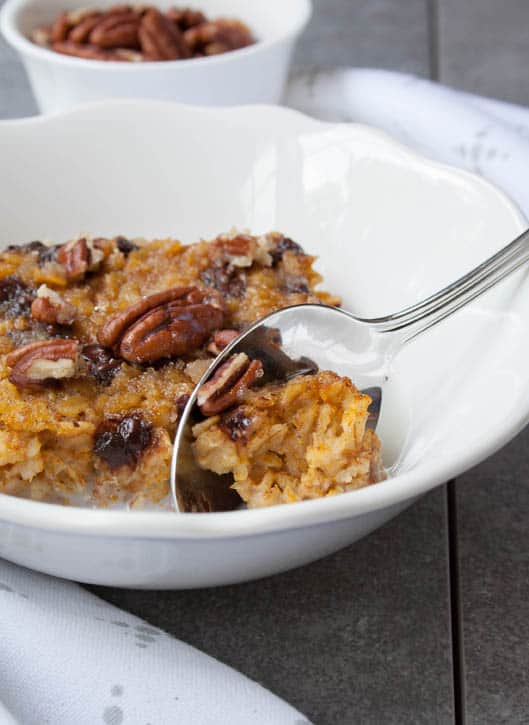 There’s a deelicious banana version of this oatmeal too! This time, I baked it in a muffin pan :)

*This recipe is lightly sweetened to allow for adjusting to individual tastes at serving. If you like a sweeter oatmeal, increase sugar to 1/4 cup, remembering you can always add more later. The recipe, as written, is sweet enough for me, but others in my family love adding a bit more sweetness at the table.

*You'll be surprised how much liquid gets absorbed into the oatmeal. I may even try adding more pumpkin in next time to see how much it can take and still bake up with a good texture. I'll add an updated note if I decide to try that. Update 4-2-16: I've recently started using a full cup of pumpkin instead of the 3/4 cup listed in the recipe. Either will work, so I'll leave the recipe as is, but just know that you have an option, especially if you're constrained by trying to use up some leftover pumpkin that you may have on hand. The extra pumpkin adds a bit more moisture and of course, more nutrients!

*Adding milk is optional. If you do add milk, break up your square of oatmeal to help it mix in with the milk. The spices of the oatmeal will add nice flavor to your milk.

I have made both of your baked oatmeal recipes. I make in a 9x13 and cut into 12. It is weight watchers friendly. Only 4points each piece. Perfect on my drive to work. I used a whole 15 oz can of pumpkin. Use 3T of maple syrup in place of brown sugar and coconut at my milk. MMMM MMMM DELICIOUS! Thank you!!!!

Karen, I'm excited that you're lovin' the baked oatmeal! I love your subs! The great thing about these oatmeal recipes is how versatile they are to changes in the recipe. I also have a carrot cake version and blueberry pie version. Check those out. Both are really yummy too!

Could I make this in muffin cups instead?

Absolutely, Melissa. You can see with my Baked Banana Oatmeal Cups how that work out. The cups make them easy to grab and go.

I want to try this recipe, but I don't buy milk. I was wondering if Almond Milk would be a good substitution?

Carlee, You can absolutely use almond milk or any kind of milk you choose. Enjoy!

Hi! Both the Banana and Pumpkin Oatmeal Bakes look amazing!!! I was wondering if you ever tried the Pumpkin as muffins? Also, have you tried adding "extra" Pumpkin as you mentioned at the end of your recipe? I'm looking forward to making these this weekend! Thank you so much!!!!

Hi Nadine! Yep, you can bake either recipe as muffins or in one pan. Yes, I have tried adding extra pumpkin. I used a full cup of mashed banana in the banana recipe, so a full cup of pumpkin works just as well for this recipe. You could always experiment with adding more. I make these baked oatmeal recipes regularly now, so it's fun to experiment. I don't think you'd ever ruin a batch, since this is not like baking a cake. You'd just get different thicknesses and textures. Thanks for the reminder. I'm going to update the notes now for future reference.

Hi, just checking with the pumpkin purée that it is just boiled/steamed at home and then puréed pumpkin ? Sorry if it seems a dumb question, Just we don't have pumpkin in a can or other packaged options in my country. Thank you

You can absolutely use pumpkin that you cook/roast/steam/boil and puree yourself! You could also cook butternut squash and puree that if pumpkin isn't available. I simply use canned because of the convenience, but homemade is great! Also check out my banana version for another option Baked Banana Oatmeal Cups.