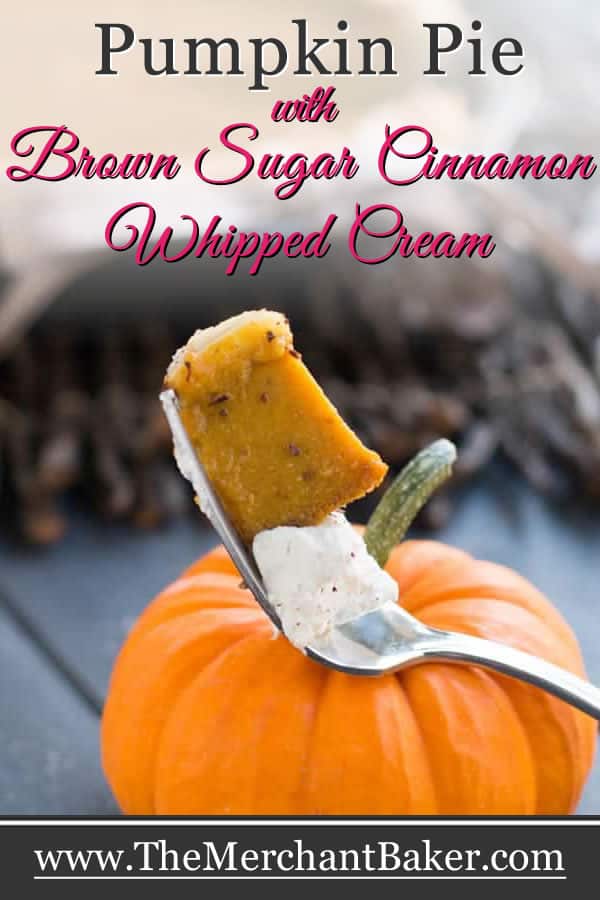 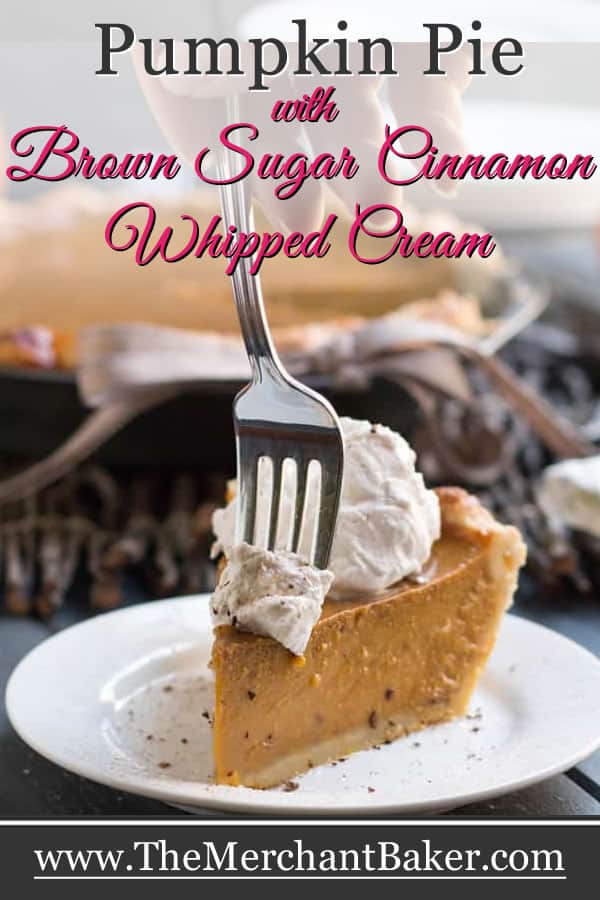 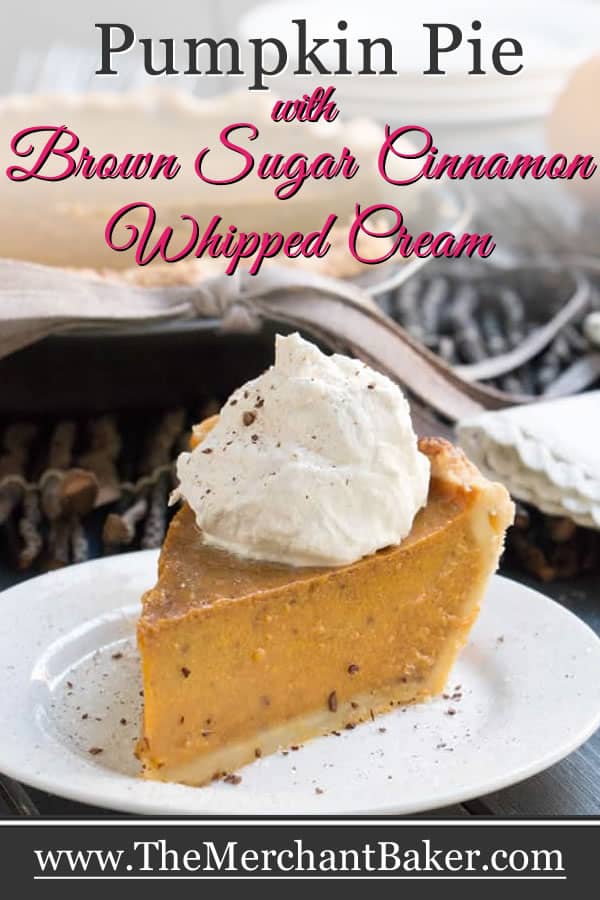 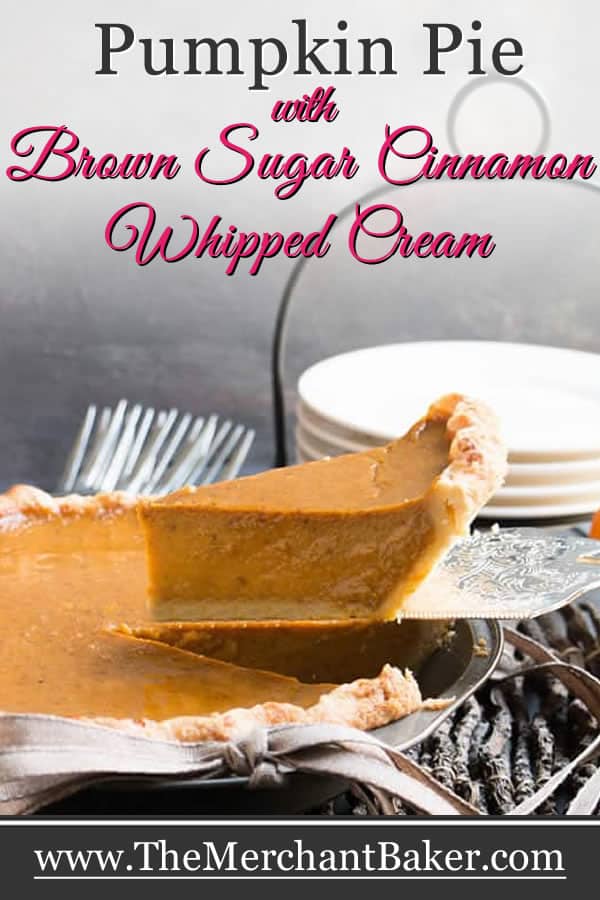 With Thanksgiving right around the corner, and an Easy All Butter Pie Crust just waiting to be used…I figured now was as good a time as any to post a good ole’ Pumpkin Pie. 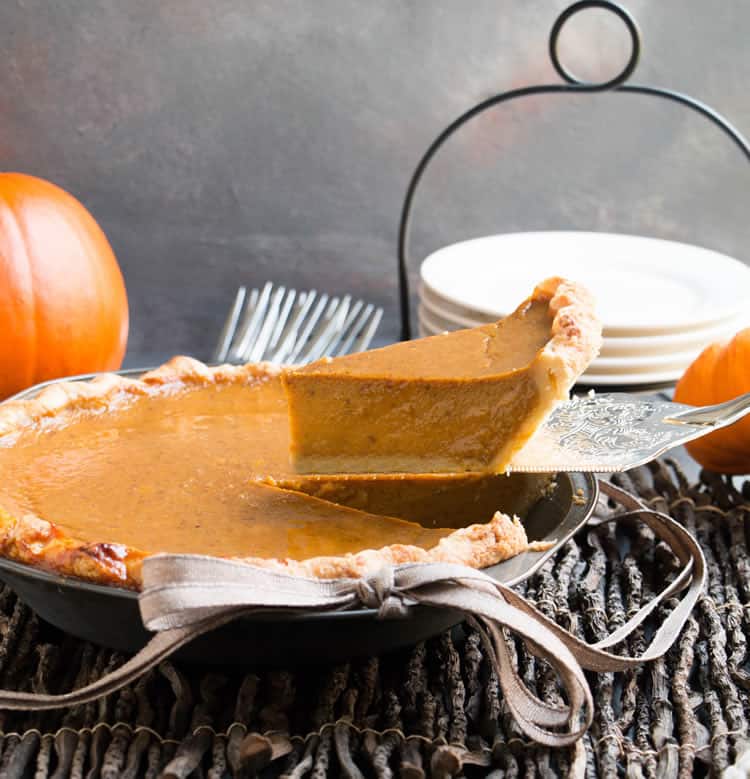 I didn’t make that pumpkin pie right away, mind you. Nope. Once I had finished fluting the edges of the pie crust (and finished the long process of making the video ;) I wrapped that baby up and popped it in the freezer.

This is a hint for those of you who want to get a head start on Thanksgiving. Whether you’re making one pie or several, knock out the crust portion now and you’ll be ready to fill and bake when the big day comes. 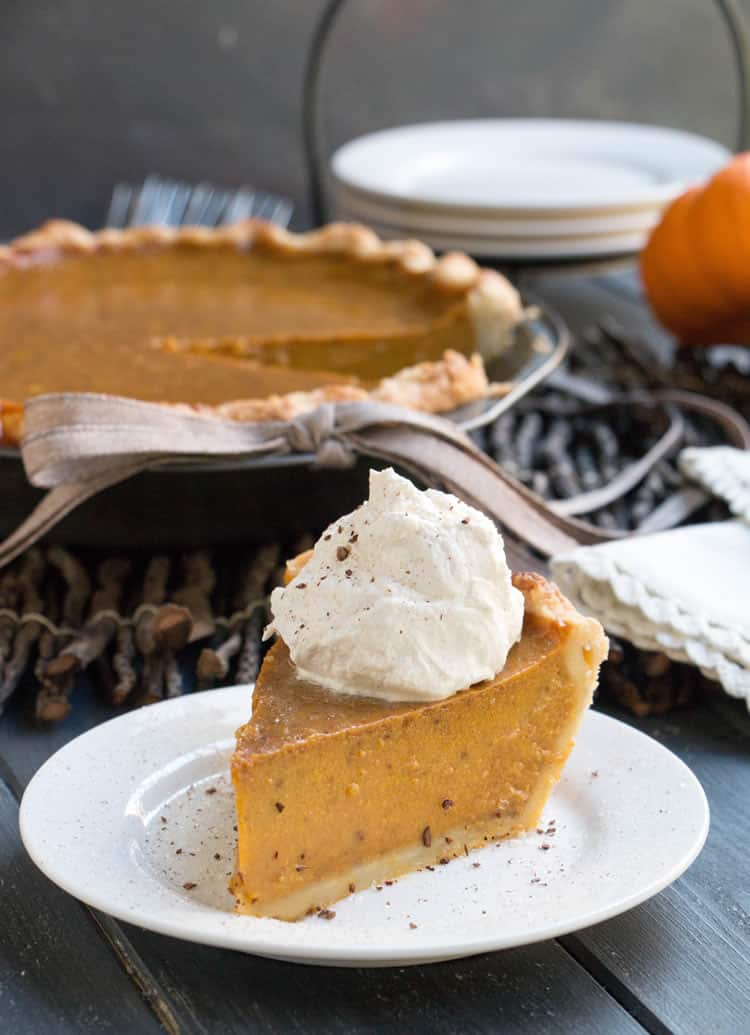 Now, about that pumpkin pie….Our family happens to be huge fans of pumpkin. All. Year. Long. I still remember buying a pumpkin pie in early November one year. My son was much younger back then, but he is as big a fan of pumpkin pie as any of us.

I had put the pie on the counter and was busy unloading other groceries and working on other things, when I noticed the pie was no longer on the counter. 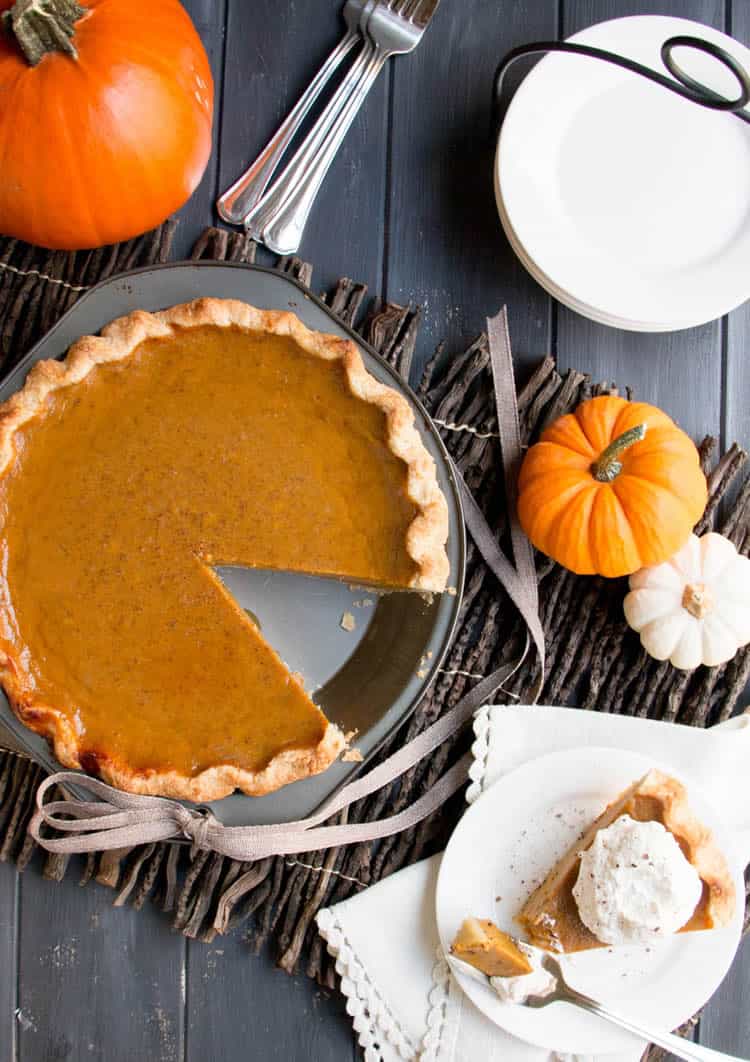 I looked around the island and found my son, gleefully sitting on the floor. He had the pie on his lap and a fork in his hand. I should have taken a picture, but I was too busy laughing at the sight of it. Yep. That kid had some BIG plans for that pie!

I have pumpkin ready to go in the pantry for easy brownies, baked oatmeal and pancakes. It doesn’t matter what I use it for…we love it. (Though I do have to admit the continuing trend of “everything pumpkin spice,” has been overwhelming and somewhat exhausting.)

One of the bonuses of pumpkin is the additional nutrition it adds to my baked goods. You get vitamin A and iron and fiber…

Of course, we’re talking pie today, so while pumpkin pie is one of the relatively “healthier” pies you can make, it’s still dessert. I just personally feel a little less guilt when eating pumpkin pie than other pie choices. 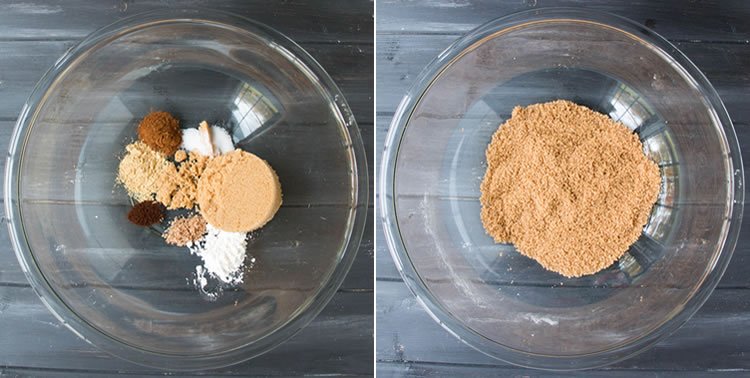 (When mixing spices and sugar together, break up any clumps of sugar so that you have a uniform mixture.)

Pumpkin pie is also a lot easier to make than a fruit pie. Assuming you use pumpkin puree from a can, there’s no chopping or peeling involved. Just mix it up and bake it.

While there are a lot of different tips and tricks out there for the perfect pumpkin pie. I’m going with a fairly easy process today. The only step I’m adding is straining the filling before pouring it into the crust.

Why strain it? Straining removes little bits of egg solids and any undissolved clumps of sugar from the mixture. 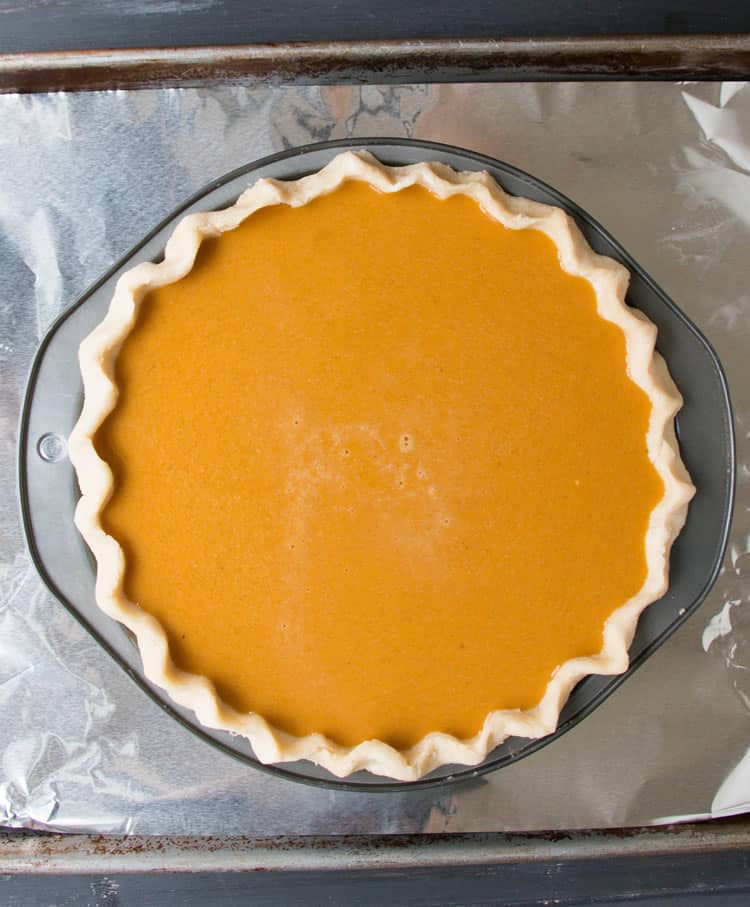 You can skip this step, but once you pour the mixture into the crust, you may have some bits of sugar and egg float to the top.

Will it taste the same? Yes! This step is optional. It simply makes for a more uniform looking top and a smoother texture. 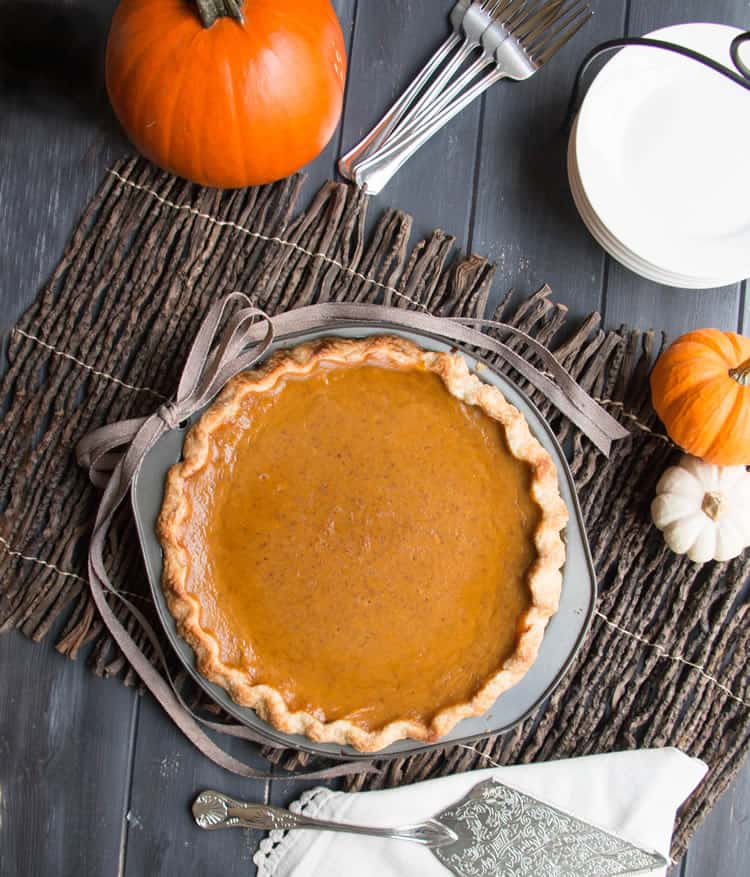 All canned pumpkin puree is not created equal. My pumpkin puree was on the wetter side, so my filling was pretty thin and easy to pour through a mesh strainer.

If your pumpkin puree is much thicker, then you might want to skip the straining or make sure you use a sieve with large enough holes to push the mixture through it. 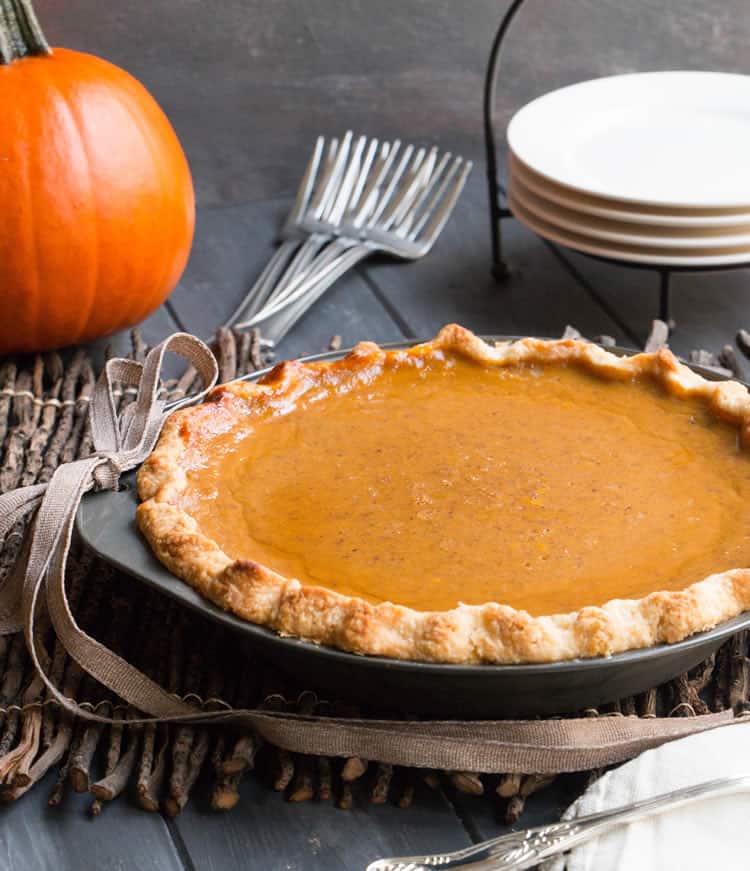 On the subject of keeping everything pretty simple, I also don’t blind bake the crust. (Gasp!) I know. I know. With many custard pies, it is recommended that you pre-bake the crust. We don’t mind a crust that hasn’t been pre-baked, at least for pumpkin pie, so I usually skip that step.

(Oh, and if you’re not into pie crust in general, then make these bars instead! Then you can have your pie on top of a cookie!) 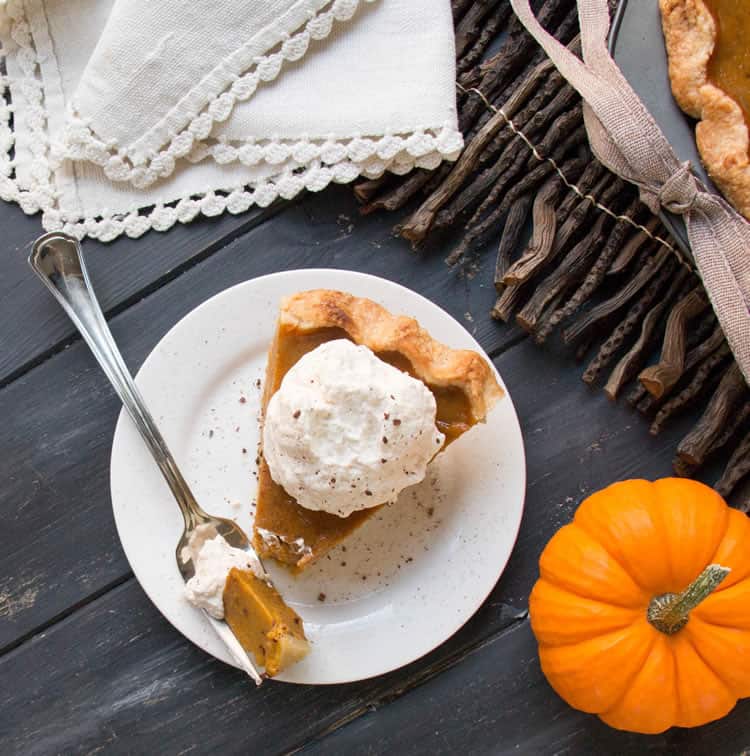 I’m sure that some day I’ll try all the extra tips like pre-baking the crust, and pre-cooking the filling or letting the unbaked filling sit overnight in the refrigerator to let the flavors bloom. When I do, I’ll report back on which tips were life changing and which were not.

But, my life is crazy busy at the moment, and I bet many of yours are too. So, I took the simple route and just mixed, strained and baked. (And remember, you don’t even have to strain if you don’t want to.)

I also added a touch of molasses to the recipe. It deepens the color and adds another depth of flavor. I didn’t add a lot because I didn’t want it to overpower the flavor of the pie. I could taste it, my family could not. That worked for me. I wasn’t looking for it to be noticeable as a separate ingredient, just have an underlying impact on flavor. If you hate molasses, omit it. 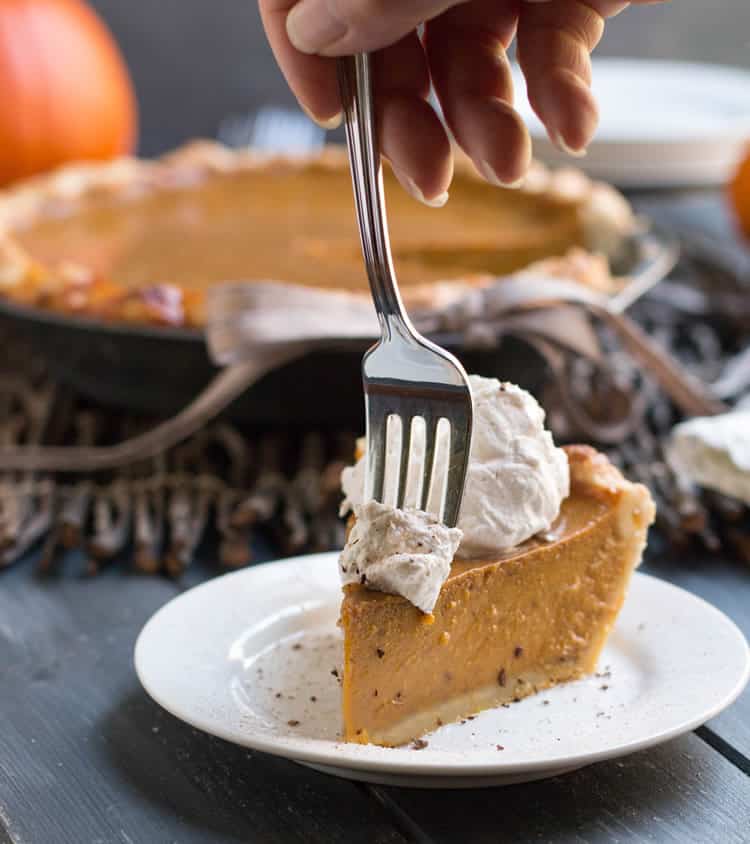 Pumpkin Pie begs to be topped with whipped cream. I decided to step it up just a bit and made a Brown Sugar Cinnamon Whipped Cream. It’s not too sweet and has just a hint of spice. It won’t over power your pie. Instead, it will add just a little something extra to plain whipped cream.

Whipped cream tip? At least for pie? Whip your cream to soft peaks. It will be easier to dollop on top of each slice. Go with stiffer peaks if you’ll be piping the topping.

And c’mon…look at that beauty of a pie! Simple. Classic. Almost makes you want to take the whole pie, find a comfy space on the floor and grab a fork. I’m sure there’s at least one person in my house, 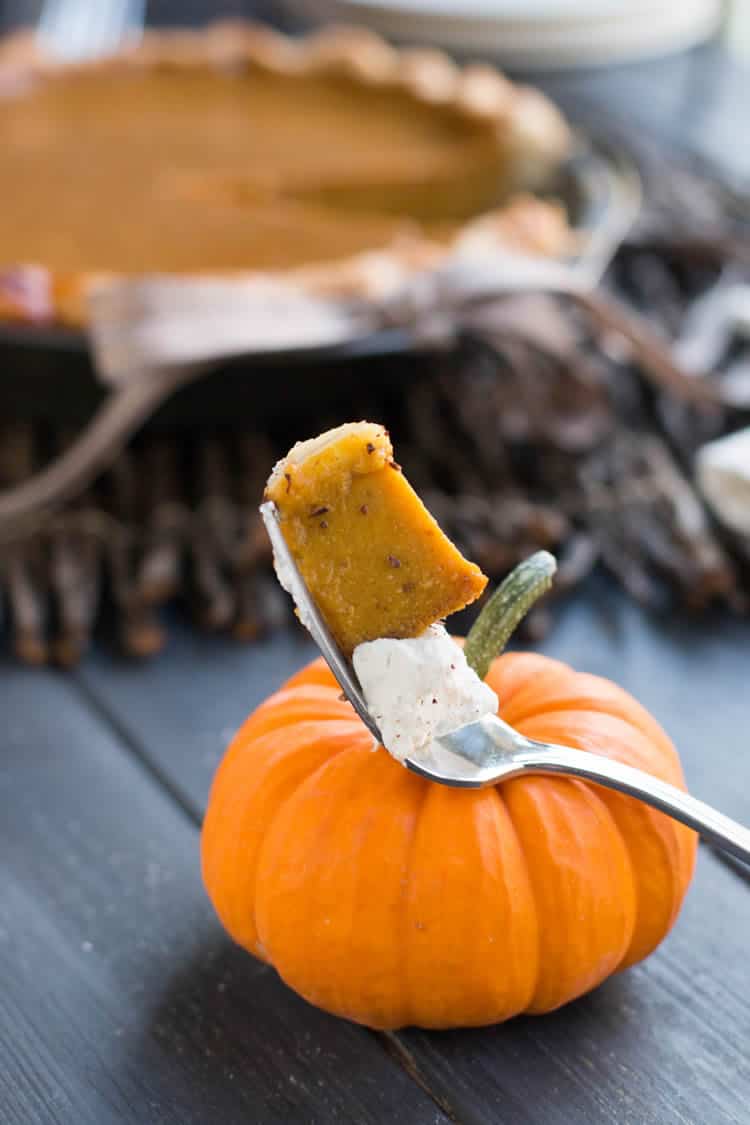 Hi Peggy, you didn't miss any ingredients. The other white powder was probably the flour. I didn't use granulated sugar in this recipe, opting instead for the full flavor of brown sugar. Most recipes add 3/4 cup to 1 cup of sugar or sweetness. Some add even a bit more. And that added sweetness can be done so many ways. I'm all about making recipes your own, so next time you make it, increase the sugar to a full cup or a nice heaping cup. That cup of sugar can be all brown, 1/2 brown, 1/2 white, or 3/4 brown, 1/4 cup white or whatever combination makes you happy. You get the idea. Thanks for coming back to check in on the recipe. I'm going to add a note to the recipe for those who'd like a sweeter pie. If you still have leftover pie, drizzle the slices with maple syrup, or honey or caramel sauce to add some extra sweetness.

I'm totally intrigued by the idea of adding molasses! Beautiful photos of a beautiful pie!

Jessie, you are always so sweet with your kind comments!

This looks like such a special pumpkin pie! Yummy!

Such a great tip to make the pie crust ahead of time! I'll definitely be doing that.

It's great having pie crust ready to go, especially if you're making a large holiday dinner. Make ahead recipes are life savers!

Love the tip to strain the pumpkin filling! I've never done so, but can tell by your photos that it does make a huge difference! And your pie crust recipe is now my go-to pie crust recipe! Many thanks!

You're welcome, Mary! I'm excited that my pie crust recipe is your go-to! Can't ask for a better compliment than that!