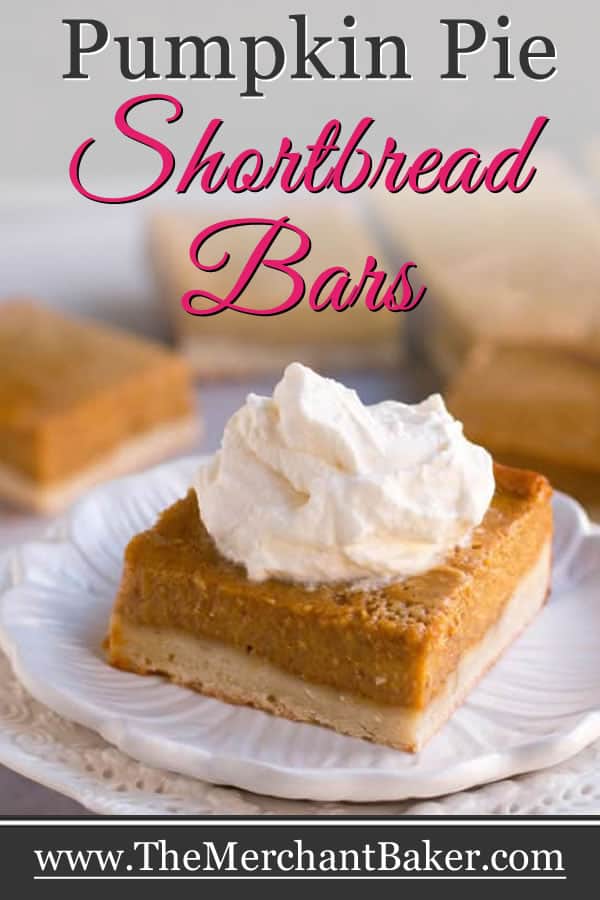 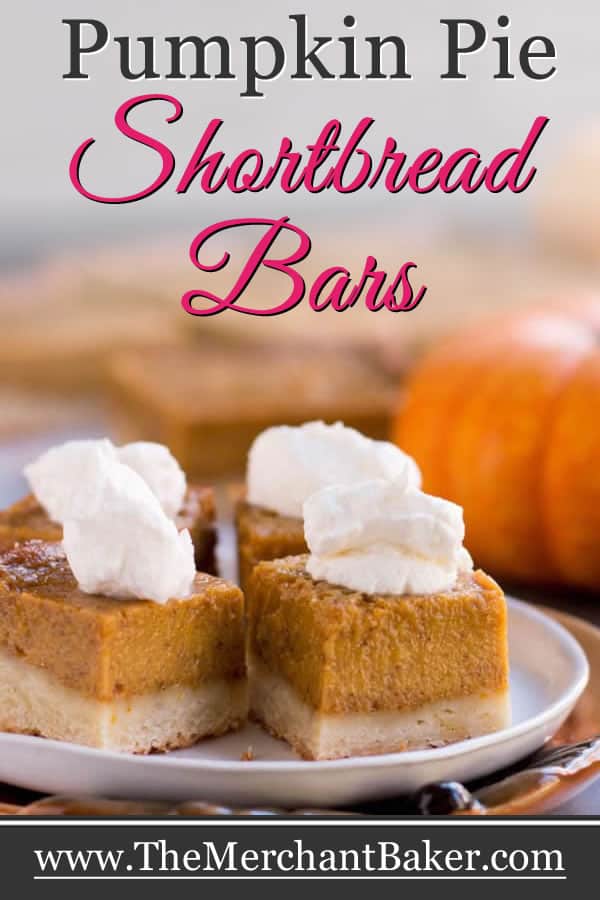 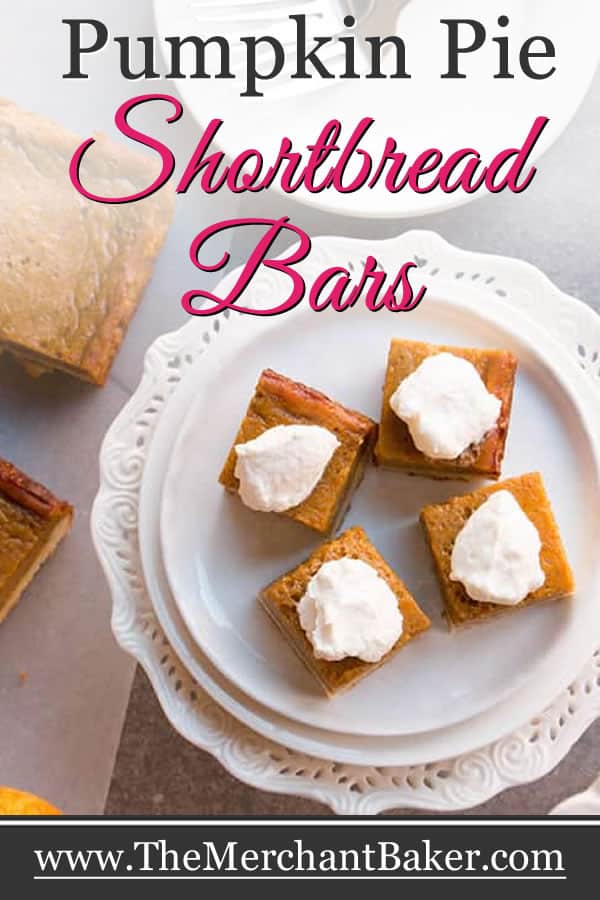 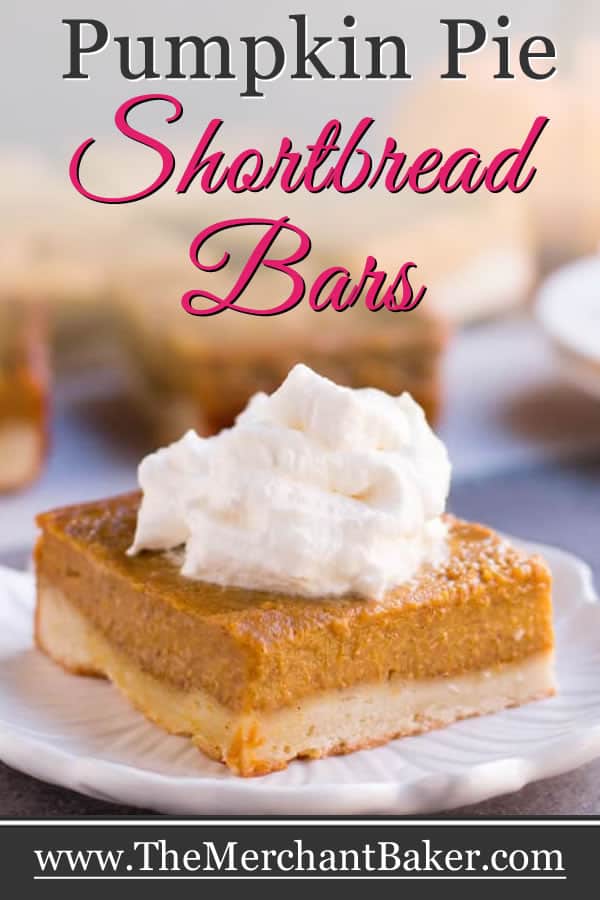 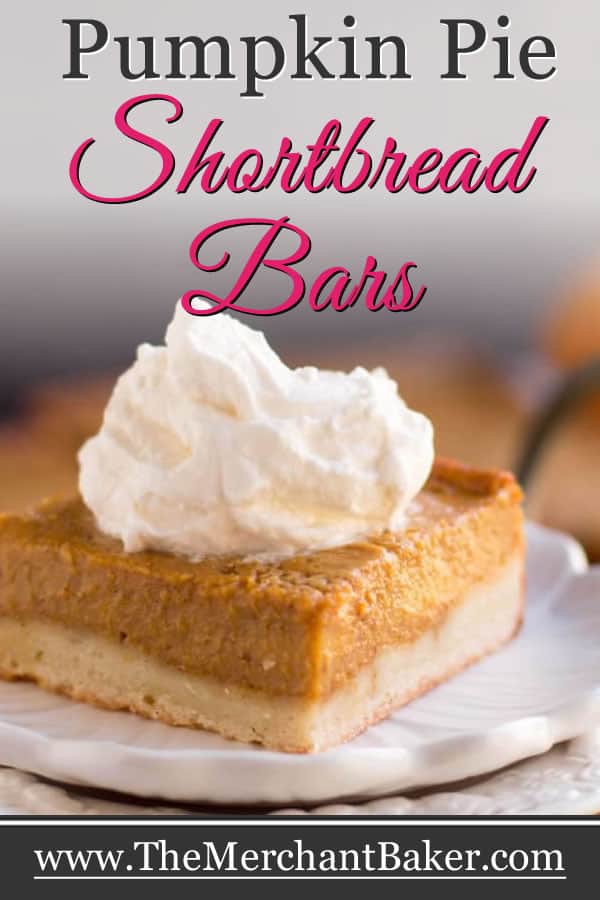 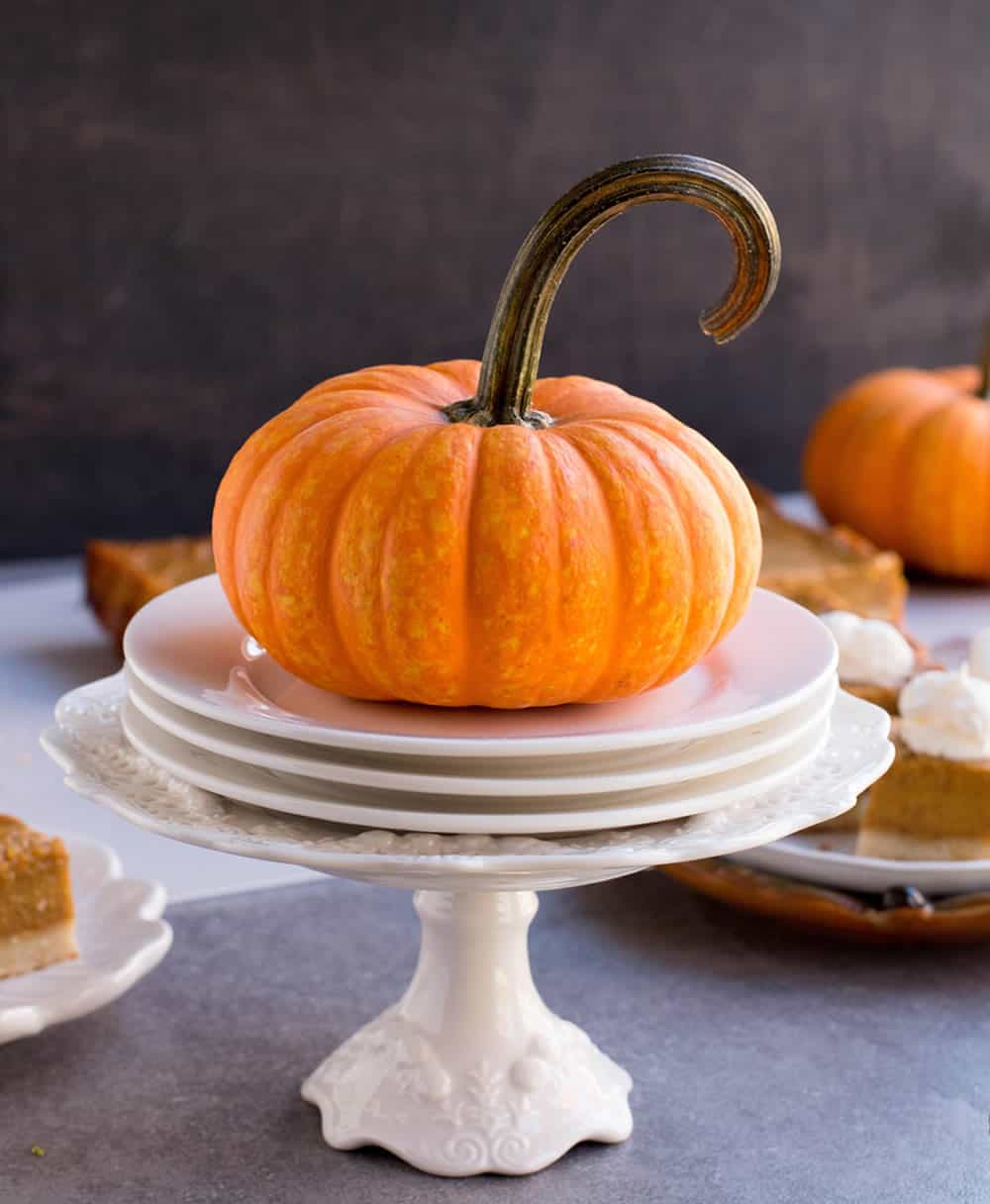 But first, can we talk about this super cute pumpkin? (No, the pie isn’t in the pumpkin, although that’s a fun idea!) I’ve been crazy over this little pumpkin ever since I picked it (and it’s brother :) up at a fall festival a few weeks ago. I love the little yellow speckles and the long rebel stems that have a mind of their own.

You’ll see them used as props in my recent pumpkin posts, One Bowl Fudgy Pumpkin Brownies and Pumpkin Ricotta Bundt Cake. (I would have used them in Pumpkin Biscuit Sticky Buns too, had I had them in my hot little hands at the time.)

I thought I would give one of them center stage now as I close out the pumpkin madness that has taken over the blog for the past few weeks. 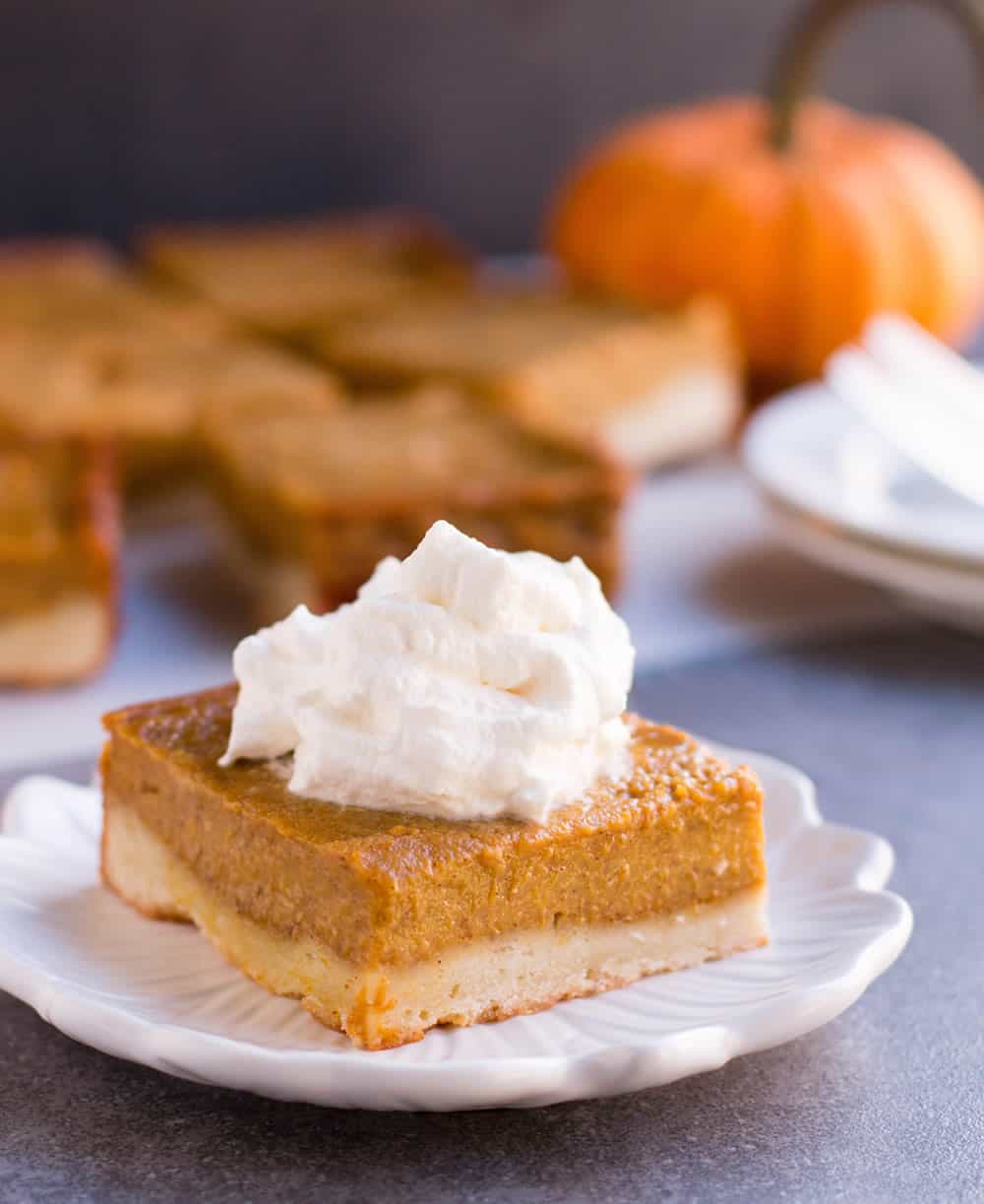 I originally wanted to post a Pumpkin Slab Pie because, well, you know I have an undying love for all things slab pie like this Apricot Cherry Slab Pie or Lemon Lime Cream Slab Pie.

Slab pies are PER-FECT for a crowd. But I didn’t have a “go to” filling and I wasn’t sure about a crust. I had done a ton of research but never got down to developing and testing recipes. 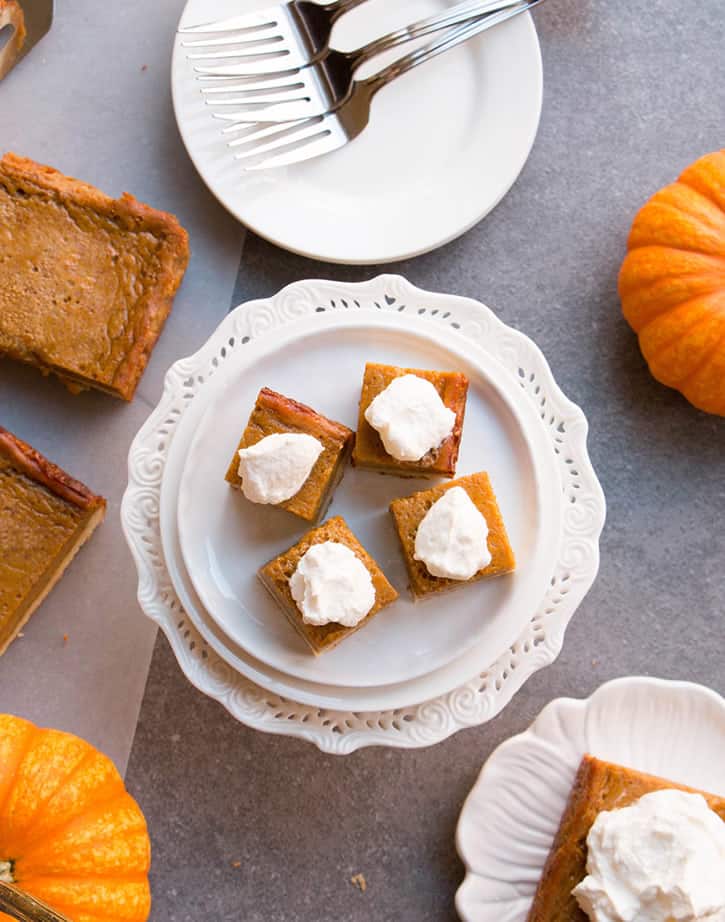 Then I decided, instead of a slab pie, I would make Pumpkin Pie Shortbread Bars (which are sort of what slab pies get sliced into anyway.)

Bars make for a great crust to filling ratio and that ratio is why I always think slab pies taste better than their traditional counterparts. For this recipe, I chose a 9″ pan, so it’s not a full slab, but it could be, if you increased the recipe. Let’s just consider this one a mini slab pie; I’m giving you a tile, instead of a whole slab :)

Let’s talk about crust. I don’t always love the pie crust on a pumpkin pies I’ve had. They always seems to be over baked on the edges and soggy on the bottom.

I usually save calories and just eat the filling. So, instead of tackling that pie crust issue head on (not that I don’t have a pie crust that I love) I went with an alternative crust and decided on shortbread. 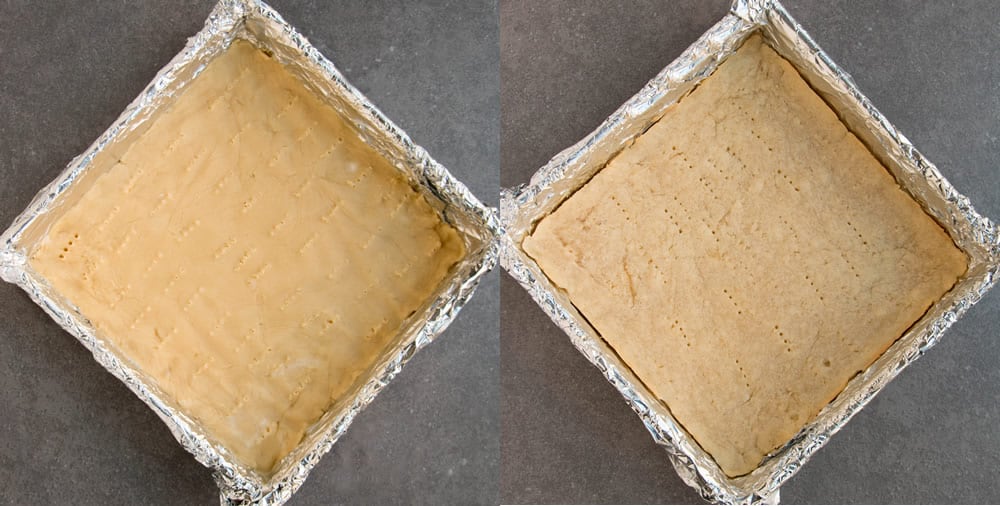 I was inspired by the crust I made for Millionaire Magic Bars. I had to tweak the amounts a few times, but I landed on the right ratio and was good to go. There’s no crust stress here.

Just mix up the dough and press it into the bottom of the pan. I used a fork to prick holes all over the crust before baking, and then baked it just enough for it to set.

Some parts of the crust bubbled up a little during the pre-baking, so I just went back over the now pre-baked crust again with a fork and released that extra air. (Photos are before baking on left, after pre-baking on the right)

I did try different ratios of flour and sugar in the crust. Some were sweeter. Some were crunchier. The one I landed on is less sweet and the texture is soft and tender, not crumbly. It’s lightly sweet, makes nice clean cuts and is easy to bite into. 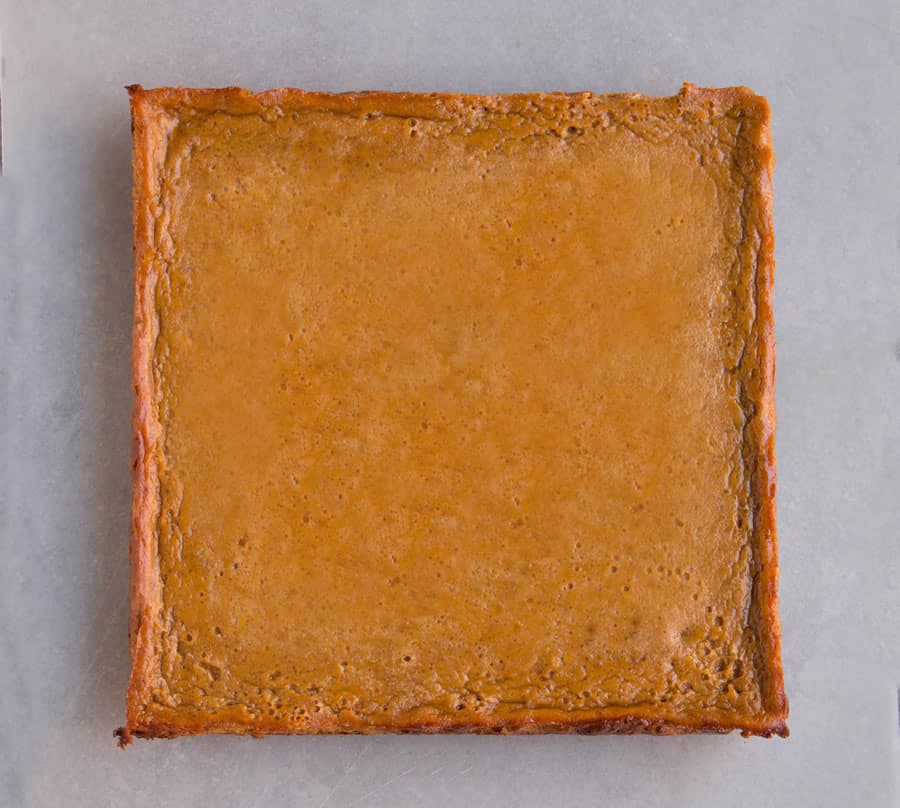 But then I thought I’d try evaporated milk and was surprised to find that the texture was creamier than the mixture with the cream. Go figure.

So I stuck with the evaporated milk, at least for this iteration of pumpkin pie. My test loving self will probably keep trying different ratios of dairy. If I learn anything new, I’ll be sure to update you. 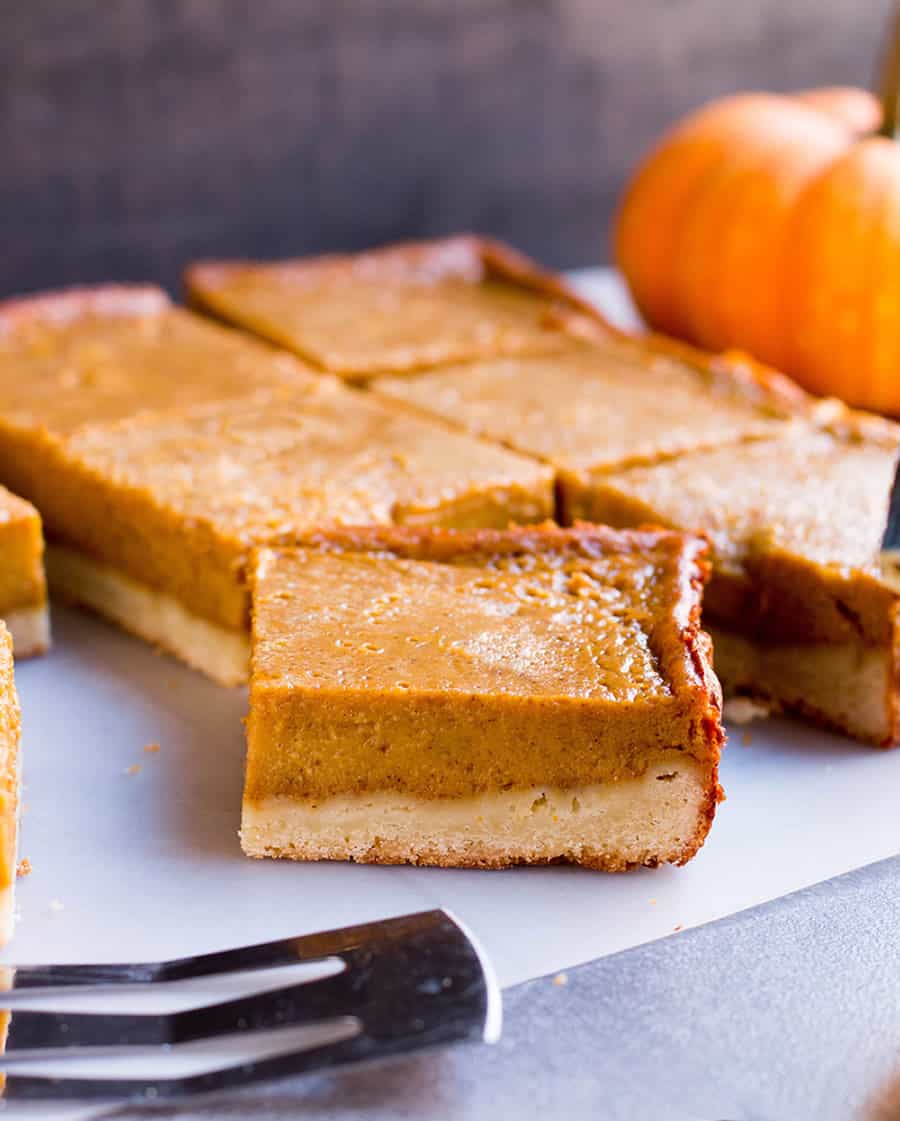 As far as spices, there’s a lot of personal preferences and my guess is that they are all pretty tasty. I wanted to insure that my spices (cinnamon, ginger, nutmeg and clove) were front and center but not overpowering.

I did add a little more ginger than your average Joe because I like that flavor in my pumpkin pies. If you have a pumpkin pie spice mixture that you already love, you can use that instead.

I know my family was loving the mix that I put in because my daughter mentioned, as she was trying a new sample, “I hope you didn’t change the spices on this new one. They were perfect!” 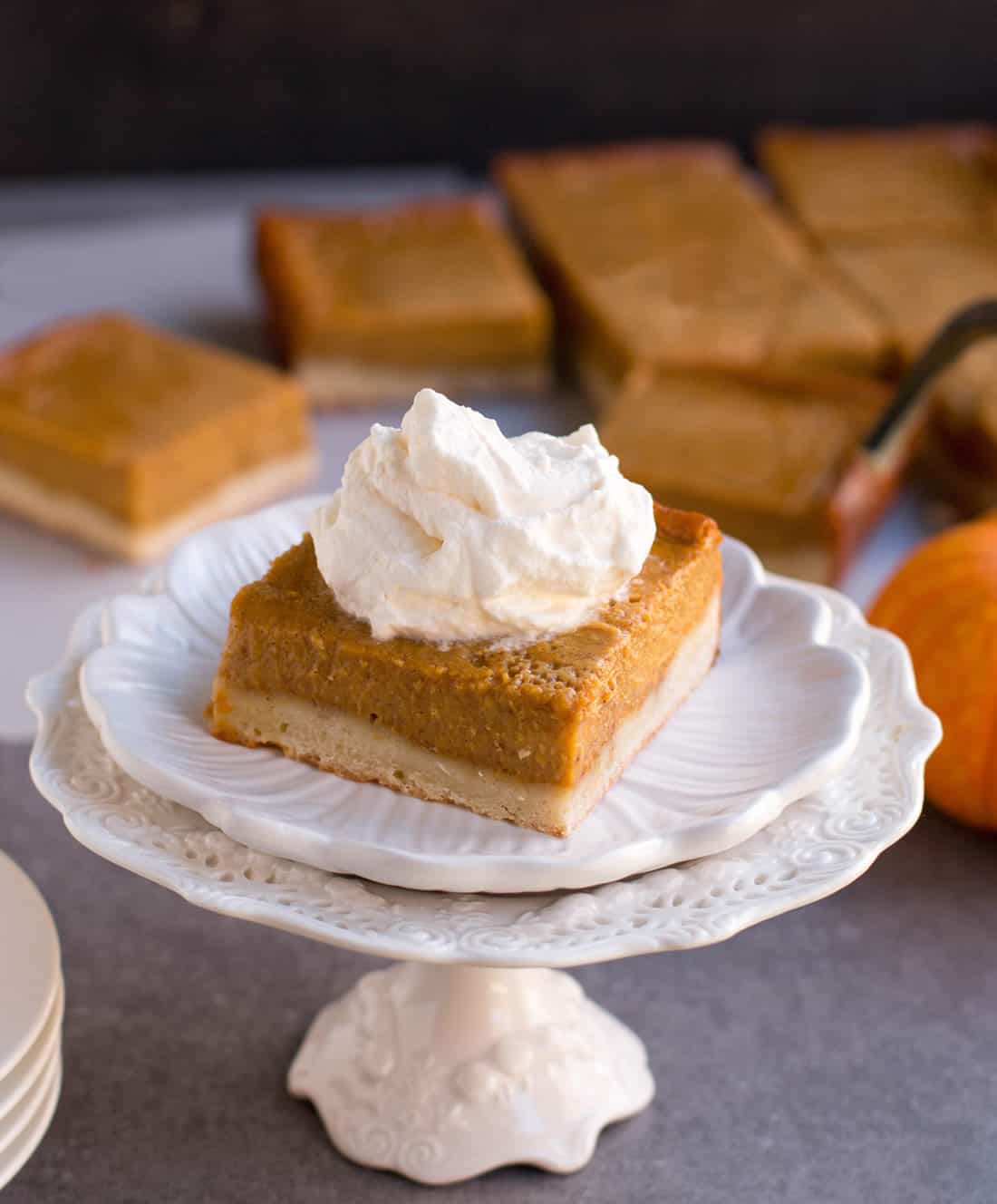 Making the custard is a one bowl deal. Beat the eggs, add the pumpkin, spices and sugar. Then stir in the milk. I started these trials by whisking the mixture. Not a good idea.

Whisking creates bubbles and they don’t go away when you bake them. You might see a few on my photos. Trust me, whisking creating a million more. So stir, don’t whisk and avoid vigorous stirring which will just pump a lot of air into your mixture.

If you do end up with some bubbles…no worries. It will still taste the same and whipped cream covers a multitude of sins… 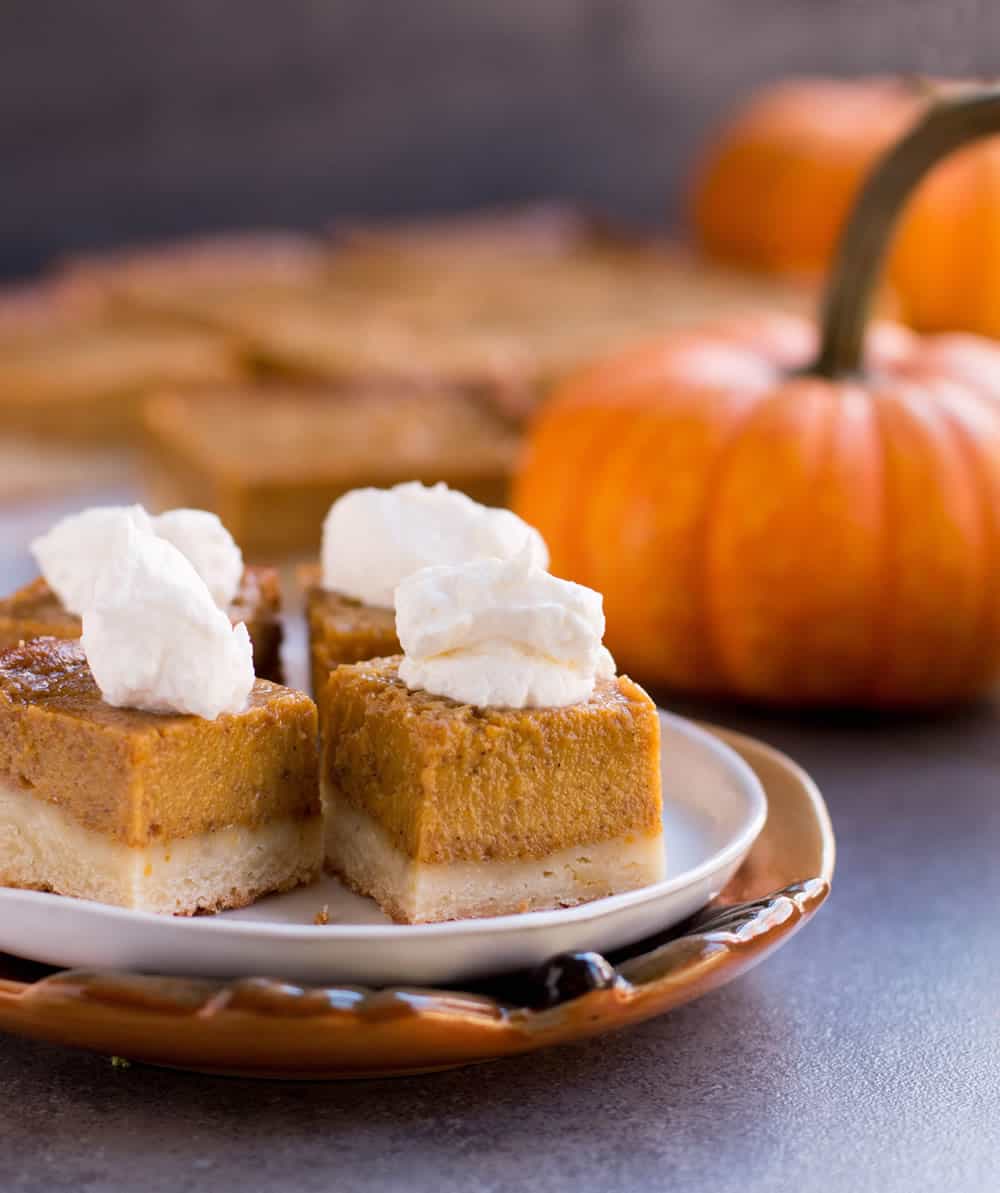 When it’s baked and cooled, you’ll have a whole square “pie” that you can cut into any size you choose. Cut into 9 large squares and top with a dollop of fresh whipped cream.

Or, I love cutting them into 36 small squares. That’s a great idea when you’re serving a lot of different desserts and you want a little of this and a little of that.

Even at 36 squares, it’s a hearty two bite dessert. Though my kids wanted to prove to me that it could be done in one bite :/ #missmannerswouldnotapprove 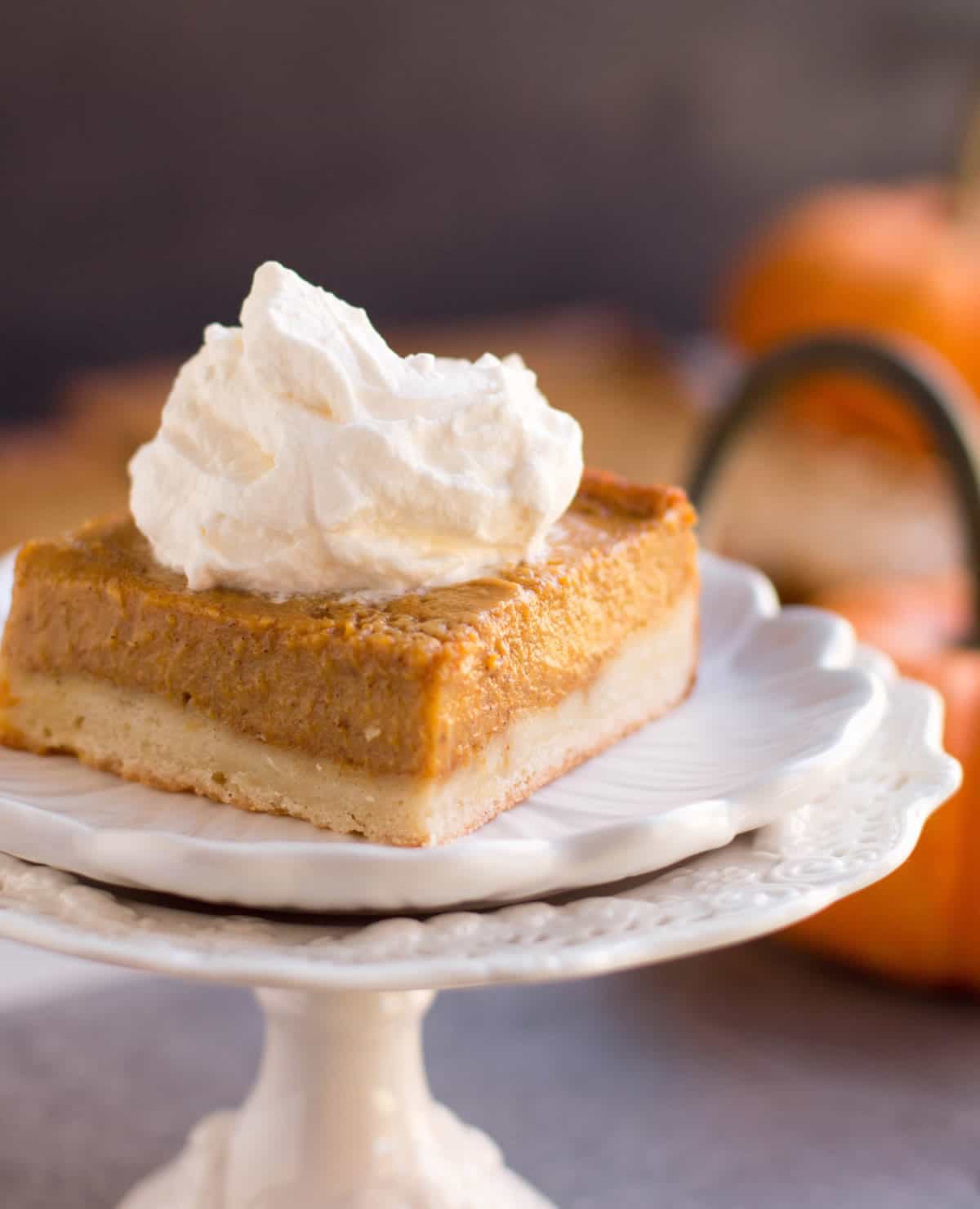 That’s the beauty of these Pumpkin Pie Shortbread Bars. They’re so much more versatile than a traditional round pie. They have all of the “pie-ness” that you’d expect from pumpkin pie but with a tender shortbread crust.

And because you can cut them into bars, I guess you could even pick them up and eat them without a fork…you know, like Amy Schumer’s “hand cake” lol! <<<ongoing joke in our house :)

Or, you could just grab a fork and dive in… 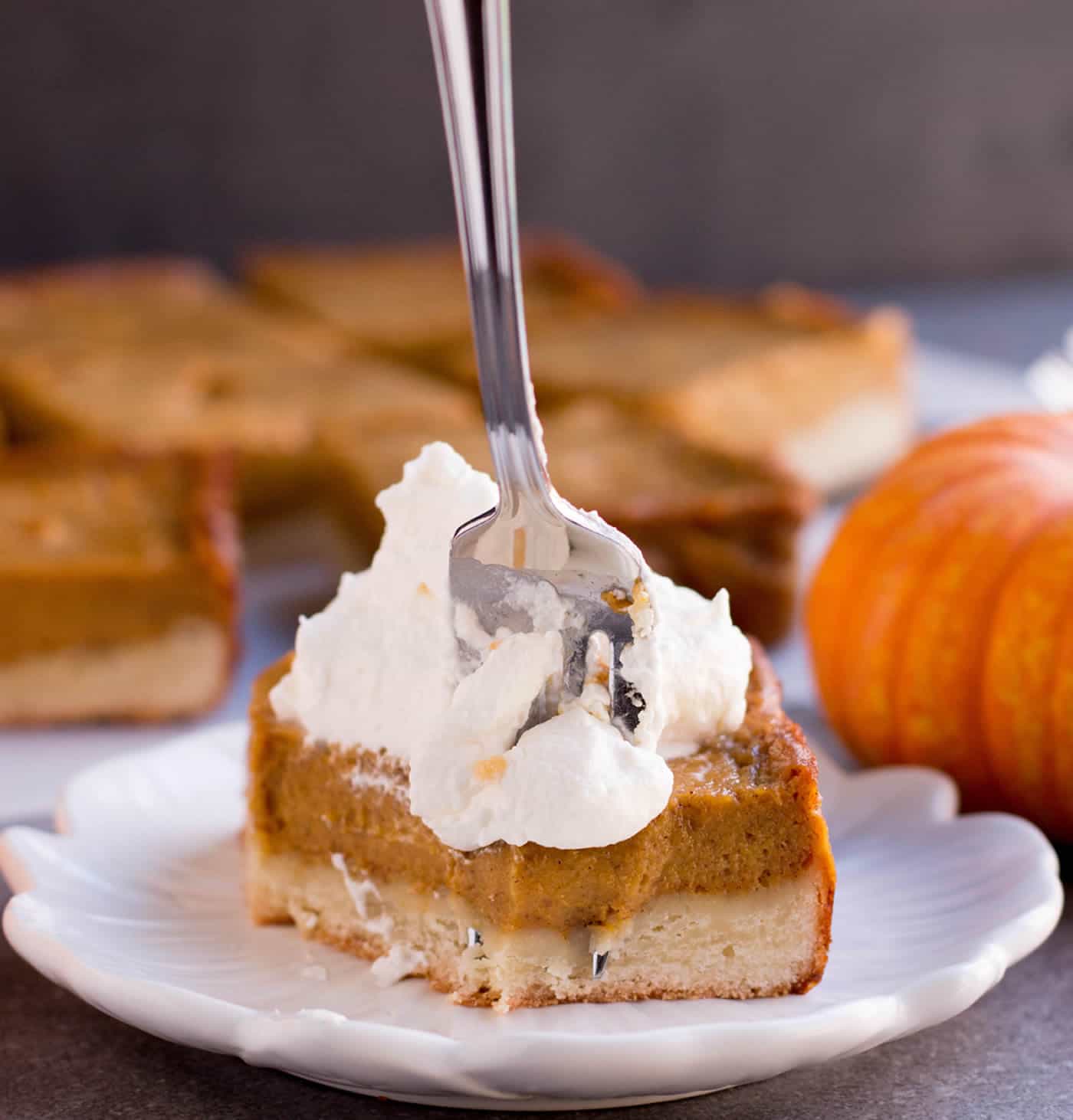 because whipped cream can get a little messy :)

For the shortbread crust:

*I tested this using 1/2 cup heavy cream and 1/2 cup milk instead of the 12 ounces of evaporated milk. It was also really good, but I found that the evaporated milk offered a creamier texture.

*The spice ratios I used provides a nicely spiced pie. You could also use 2 teaspoons of pumpkin pie spice instead of the individual spices or change the ratios of the spices I gave to suit your desired taste.

*I tested the crust with 1/2 cup sugar and 1 cup of sugar. I thought the one cup was too sweet so I cut it in half. It now tastes like a classic, not too sweet shortbread and balances nicely with the filling. If you want a sweeter base, try 3/4 cup. At 1 cup, the crust was crispier and we thought, too sweet.

*After the bars completely cool, store lightly covered in the refrigerator for up to 4 days. You can then serve cold, room temperature or warm up quickly in the microwave. For the cleanest cuts, I cut the bars when they are cold.

*Need more servings? Make a batch and a half and bake it in a 13 X 9" pan, if you want a similar thickness of crust and filling. You can double it but your crust and filling will be thicker than what the recipe shows and your bake times could be longer. Just keep an eye on the oven when you're nearing the end of recommended bake time for the smaller pan and decide when it's done by how it looks instead of worrying about a specific time. If you have a 10X15" jelly roll pan, that should work for doubling without too much difference in thickness. Just make sure your pan is deep enough to hold all of the filling!

The recipe doesn't tell you when to add the brown sugar to the filling. It's listed with the filling ingredients, but mention in the directions. My crust was not shortbread texture. It was too moist, perhaps like a dense cake...not like a shortbread. What did I do wrong?

Betty, I apologize for the omission in the directions. The problem has been fixed. As far as the crust is concerned, this is a soft shortbread crust, not a traditional crumbly shortbread. So it is meant to be like a thick soft cookie. I'm not sure what happened when you made it. It's possible you whipped a lot of air into the batter or maybe you could have measured the flour differently. I always use the scoop and sweep method for measuring flour, stirring it first to fluff it up, then spooning into my measuring cup and scraping the flat side of a knife across the top to level it. If you are looking for a less moist shortbread, you could try omitting the egg (only in the crust portion) and see if you like that better.

If you make a batch and half, is the crust changed as well as the filling? For 9x13 pan

Hey Pete, I just updated the notes. If you have a 10 x 15" jelly roll pan, you can double the recipe and the thickness should be similar (just very slightly thicker) to the single batch in a 9 x 9" pan. I know some don't have that size pan, but I thought I'd add it as an option for those who do.

A delicious recipe. Took small squares to a meeting today. One friend tasted and warned everyone else to not ear them. She wanted to eat them all. I look forward to your posts.

Katherine, I know that warning all too well, lol! For those that love pumpkin pie, they are quite the treat! Thanks for the fun feedback :)

These sound amazing. Great pictures too!

Thanks, Adam! I always love a shout out on the photos :)

This looks delicious. I also almost never eat the crust on pumpkin pie. (Not worth the calories) I think I will trial this on the weekend. The last time I made pumpkin pie, I subbed in 1/2 marscarpone cheese for the milk, it came out really smooth and creamy, so I may try that here also. Also, your pumpkins are adorable!!

Cyndi, I've become a little obsessed with experimenting with the filling. I have so many ideas for subs. I bet I would love the mascarpone! Some recipes go with all heavy cream, but one of the reasons I love pumpkin pie is because it's a smaller splurge than other pies. As always, I'll look forward to your feedback!