Friends, this is the story of how One Pan Green Beans, Mushrooms and Shallots came to be. 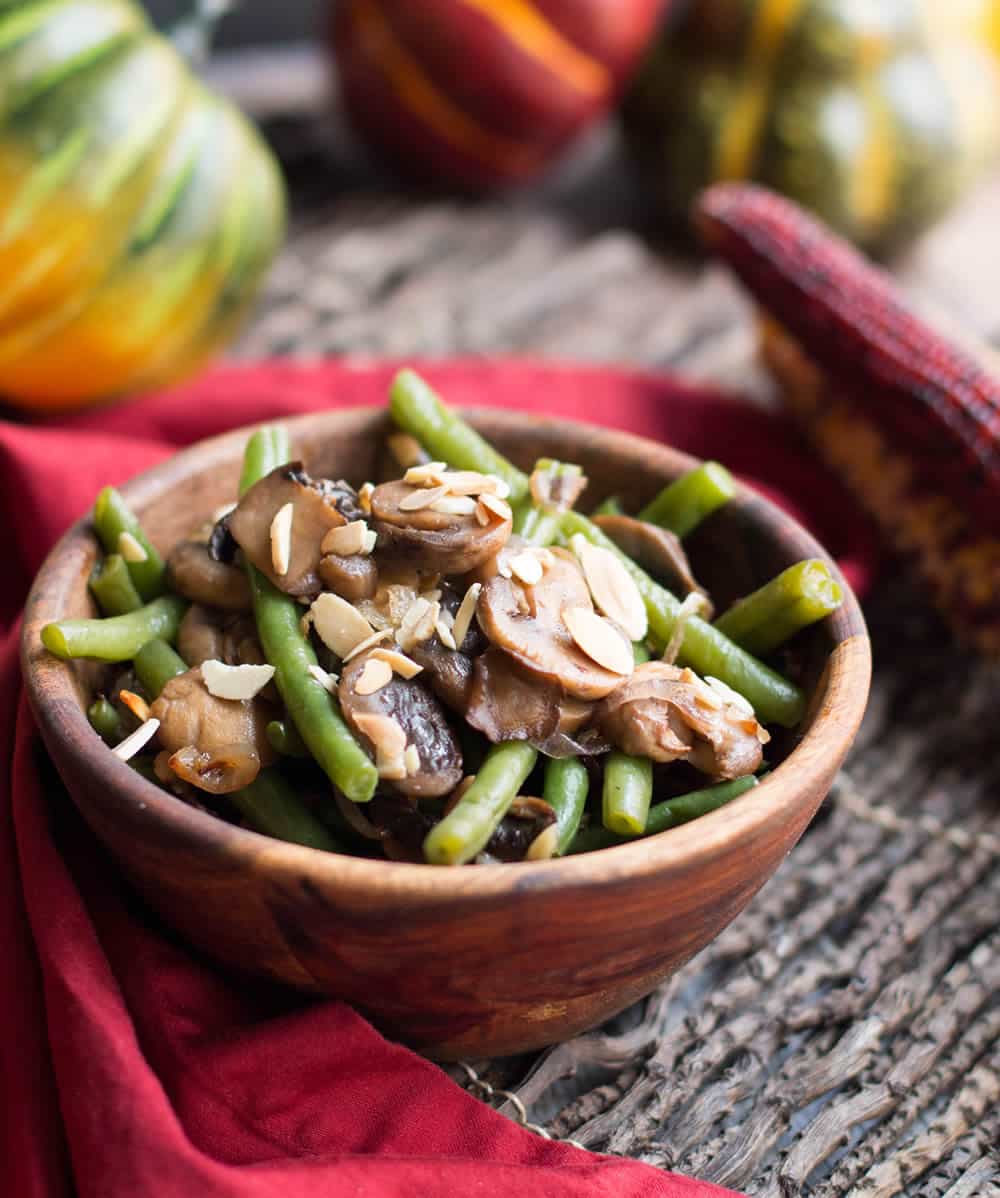 What’s one of the most popular green veggies that lands on a Thanksgiving table? I’m going to guess it’s green beans. Why? Because we pretty much all grew up on traditional green bean casserole, no? It’s graced more Thanksgiving meals than not in my life. And, I’ll admit/confess that I’ve always enjoyed it, with it’s frozen green beans, canned cream of mushroom soup and crispy fried onions.

There came a time, though, that I decided I wanted to make it from scratch. So for the next few years, I bought fresh green beans, sauteed fresh mushrooms and made my own cream sauce. (Though I still bought the fried onions.) And it was dee-licious, much better than the quick version. 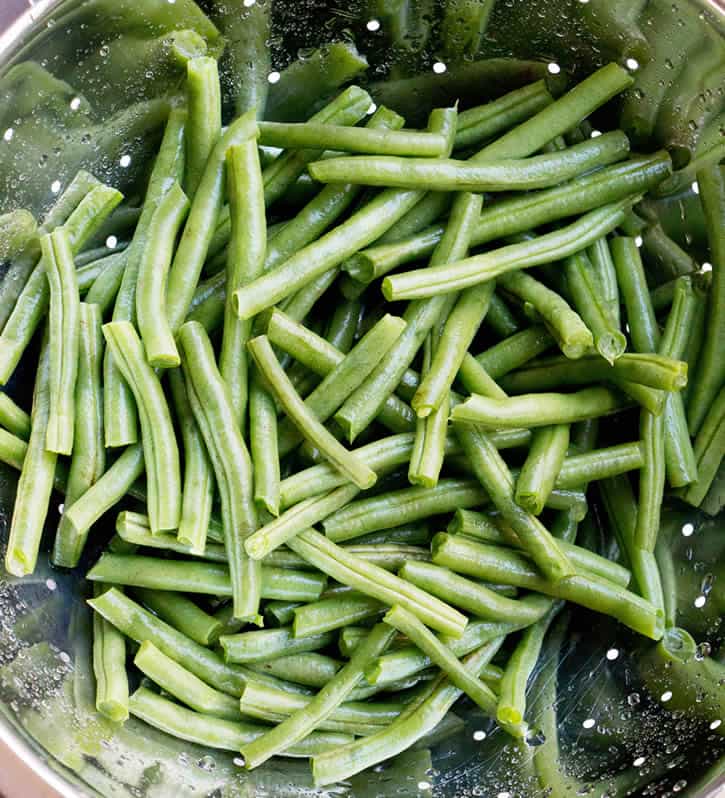 But then there came another time. I had been cooking Thanksgiving dinner in all it’s glory, and it all started to be too much. Every single side dish was special and that usually meant rich. The sweet potatoes were glazed, the mashed potatoes had sour cream, or cream cheese or something extra going on. I kind of got tired of every main ingredient getting a little lost in the special-ness of each dish. And it’s not like I didn’t love all of the special side dishes individually, or if I’m being totally honest, even all together at the big meal. Once… as in one meal, one time.

But year after year of leftovers kind of left me wanting some lighter recipes. The way I cook, my family would be eating leftovers for more than a day or two and after awhile, it was just too much. I felt it… and my daughter? She started lobbying for NO leftovers. She only wanted to eat the food once. We all wanted simpler stuff to be leftover. (It’s also easier to transform a leftover dish into something new if it doesn’t have so much going on to begin with.) 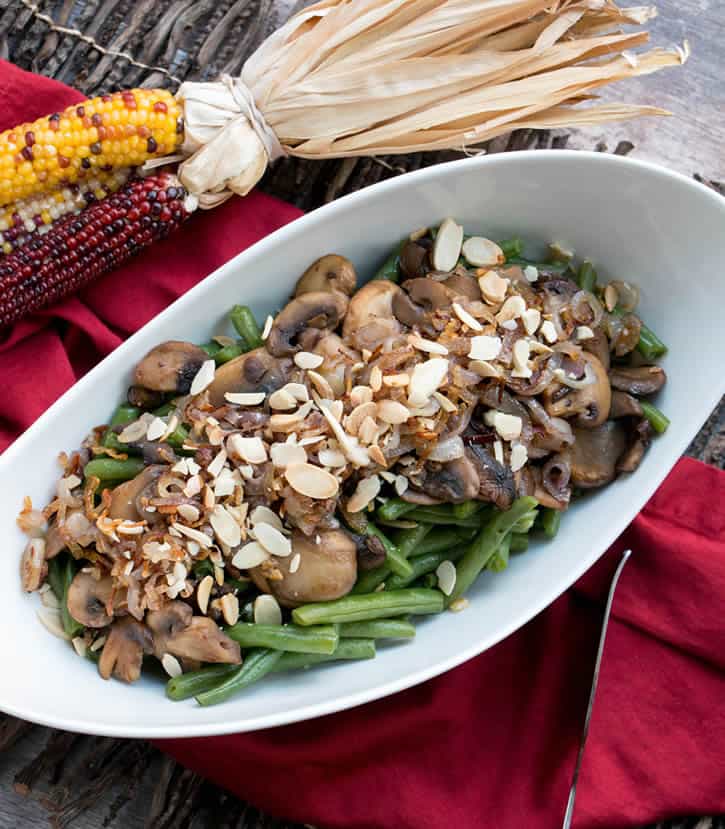 It’s not that a batch of rich roasted garlic mashed potatoes still won’t turn my eye. It’s just that I think they’d shine more as a special side dish at a normal Sunday dinner of roast chicken, instead of competing for my attention with a buffet full of other “special” side dishes.

So now when I make mashed potatoes for Thanksgiving, I just make simple mashed potatoes, with a little butter and milk, salt and pepper. I want them to be a beautiful blank canvas for a pool of homemade gravy or just perfectly fluffy and buttery on their own. And I will never, not ever, not make some type of special sweet potato dish, so other side dishes have to take the fall ;) 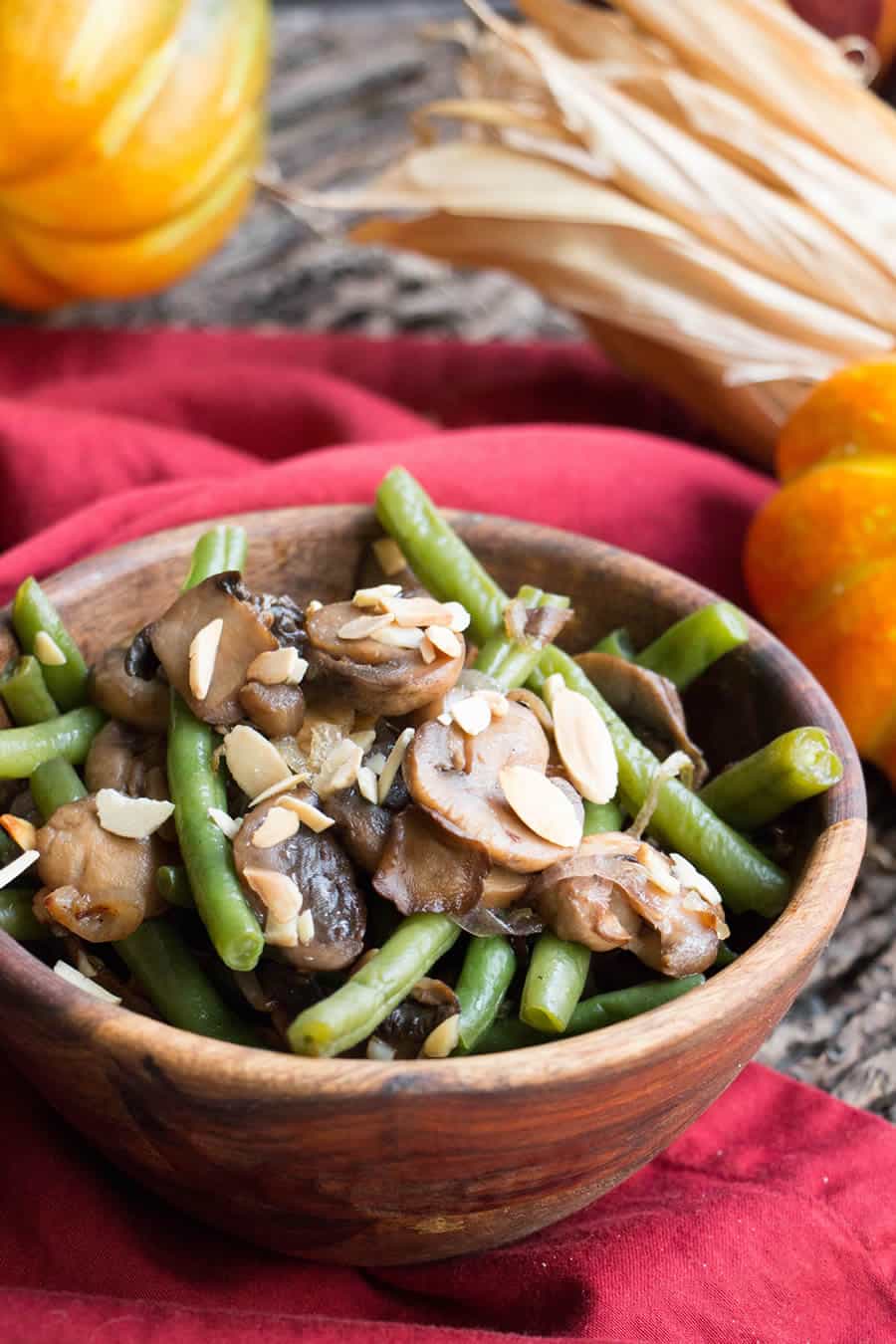 Then, as time passed, I felt that even a scratch made green bean casserole was too much, so I ventured into the land of green beans amandine. Simple green beans in a lemon butter sauce tossed with toasted almonds. Yes! This was perfect! Fancy enough for the holiday meal but not laden with cream. Wonderful as leftovers that we wouldn’t tire of. I almost posted a recipe for that. But the story doesn’t end there… 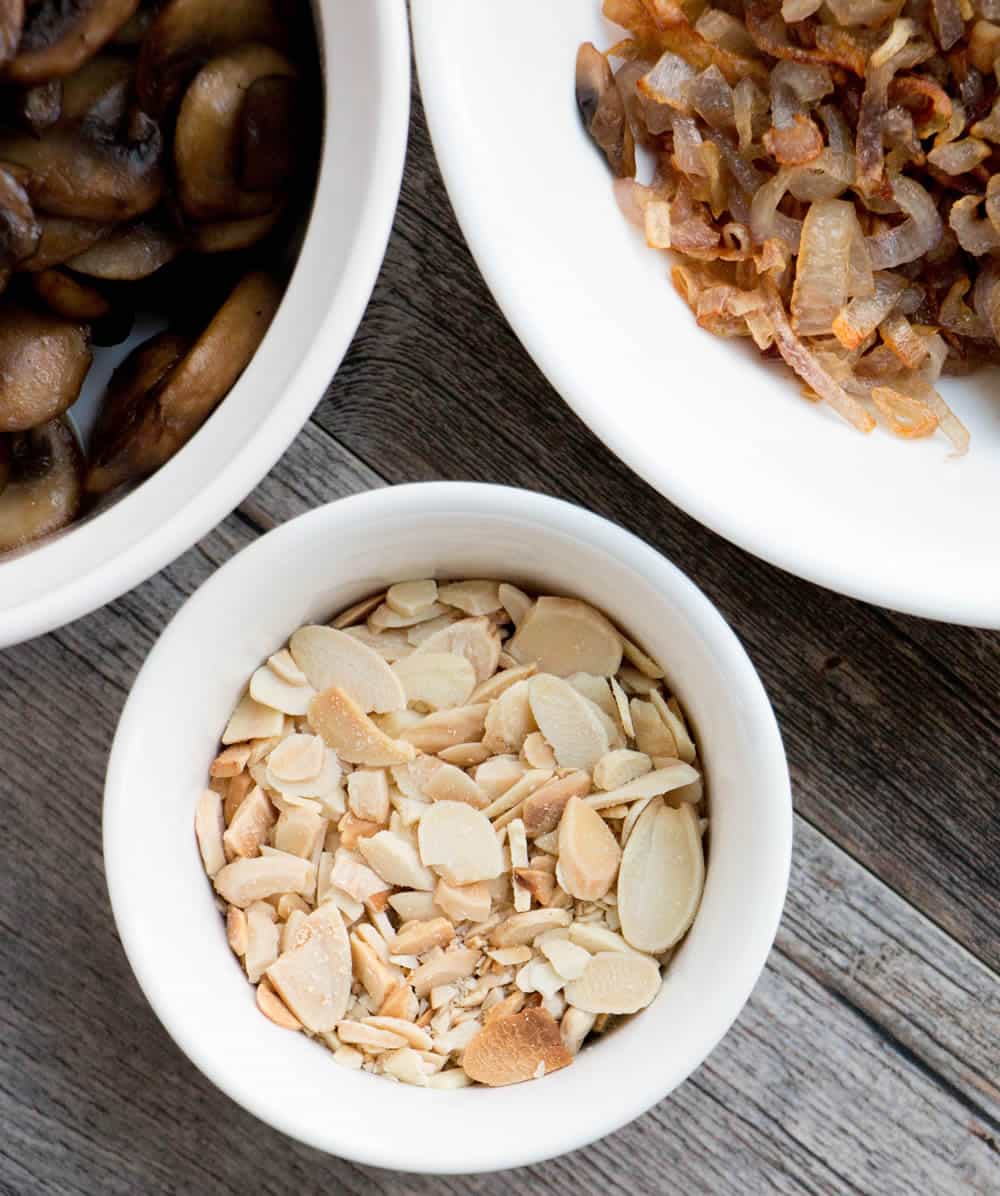 At some point, I started to get a little nostalgic for the mushrooms and onions that are an integral part of that green bean casserole. So, I decided to take my green beans amandine up a notch by adding the flavors of that traditional casserole. I created a new green bean love child that is this One Pan Green Beans, Mushrooms and Shallots.

Side note: I wish I had thought to buy haricot verts instead of the typical garden variety that I picked up for this shoot. Haricot verts are longer and thinner and a bit more elegant than the ones I shot in these photos. And they’re what I generally use for this recipe. They’re also in ample supply this time of year, so definitely use those. Or use whatever green bean you love. They’re all welcome here. 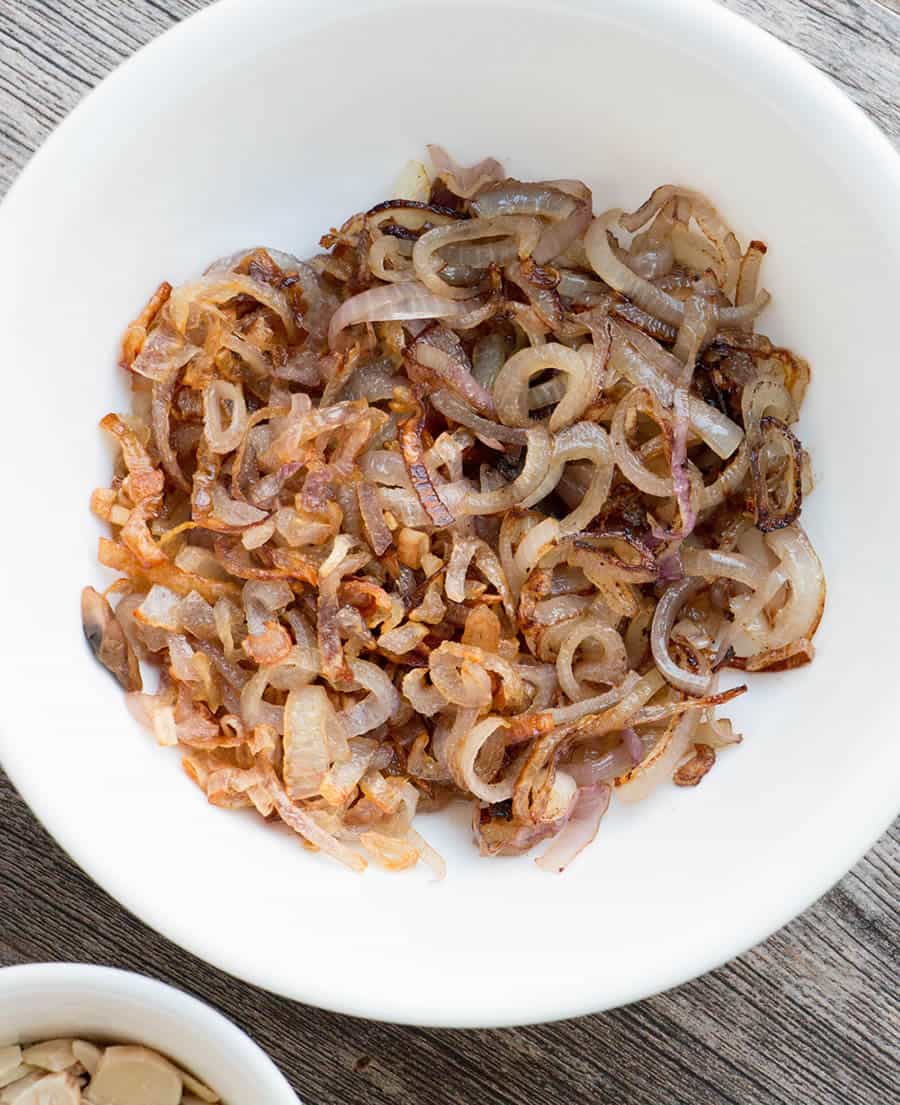 Here’s how this one pan dish goes…You’re going to saute sliced shallots in a few tablespoons of butter until they’re browning on the edges. The butter is getting all brown and nutty too while this is going down. Scoop the shallots out of the pan and throw in sliced mushrooms. I used white mushrooms, but I’ve also used mixed varieties. 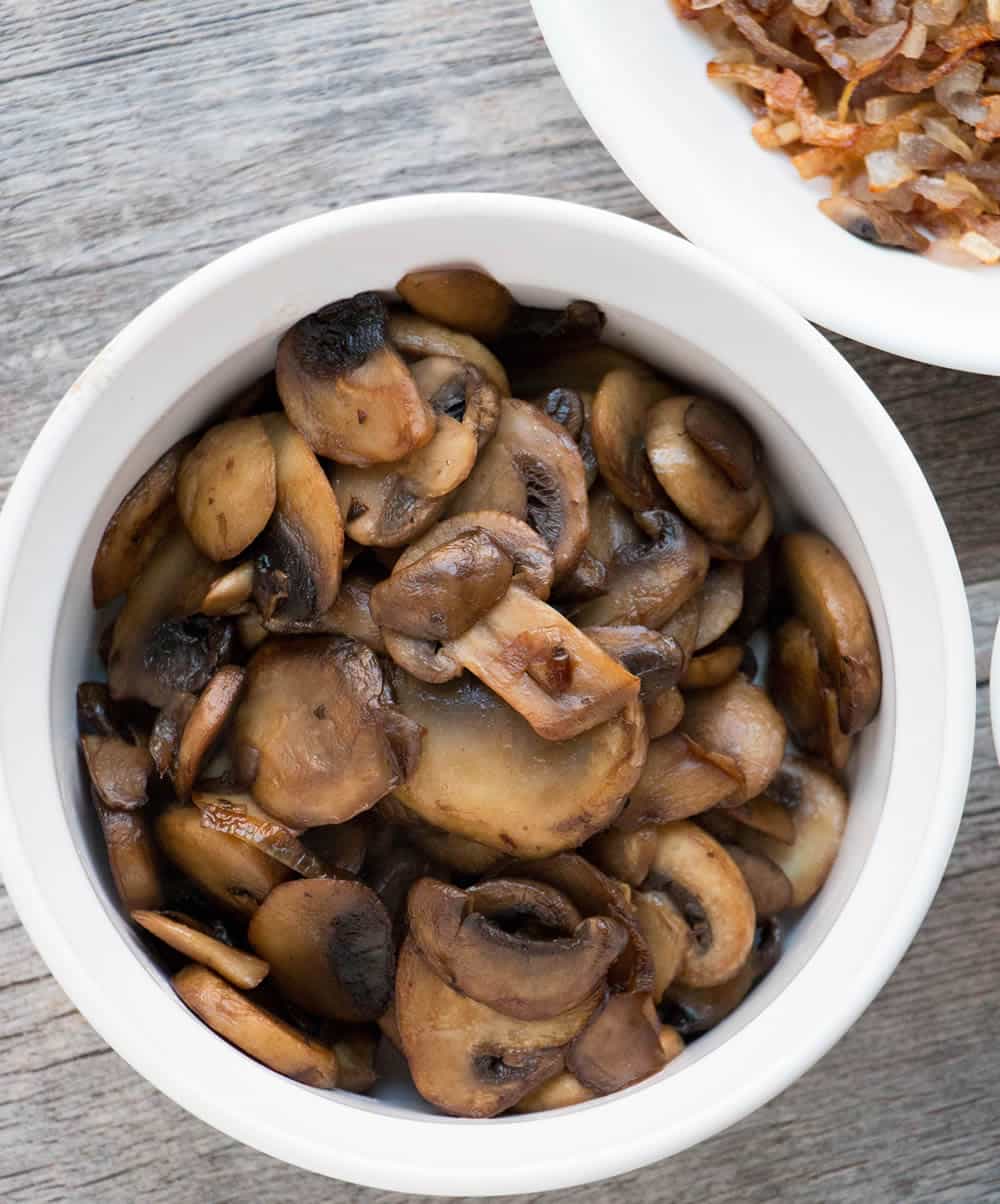 You’re going to saute those mushrooms in the residual shallot flavored browned butter (yum!) that’s still in the pan, until they have gotten plump and tender. Mushrooms out, green beans in. This time, we’re adding a bit of water. Now you’re steaming the green beans in the same pan that browned the butter and sauteed the shallots and mushrooms. The water deglazes the pan and that flavored liquid cooks the beans. 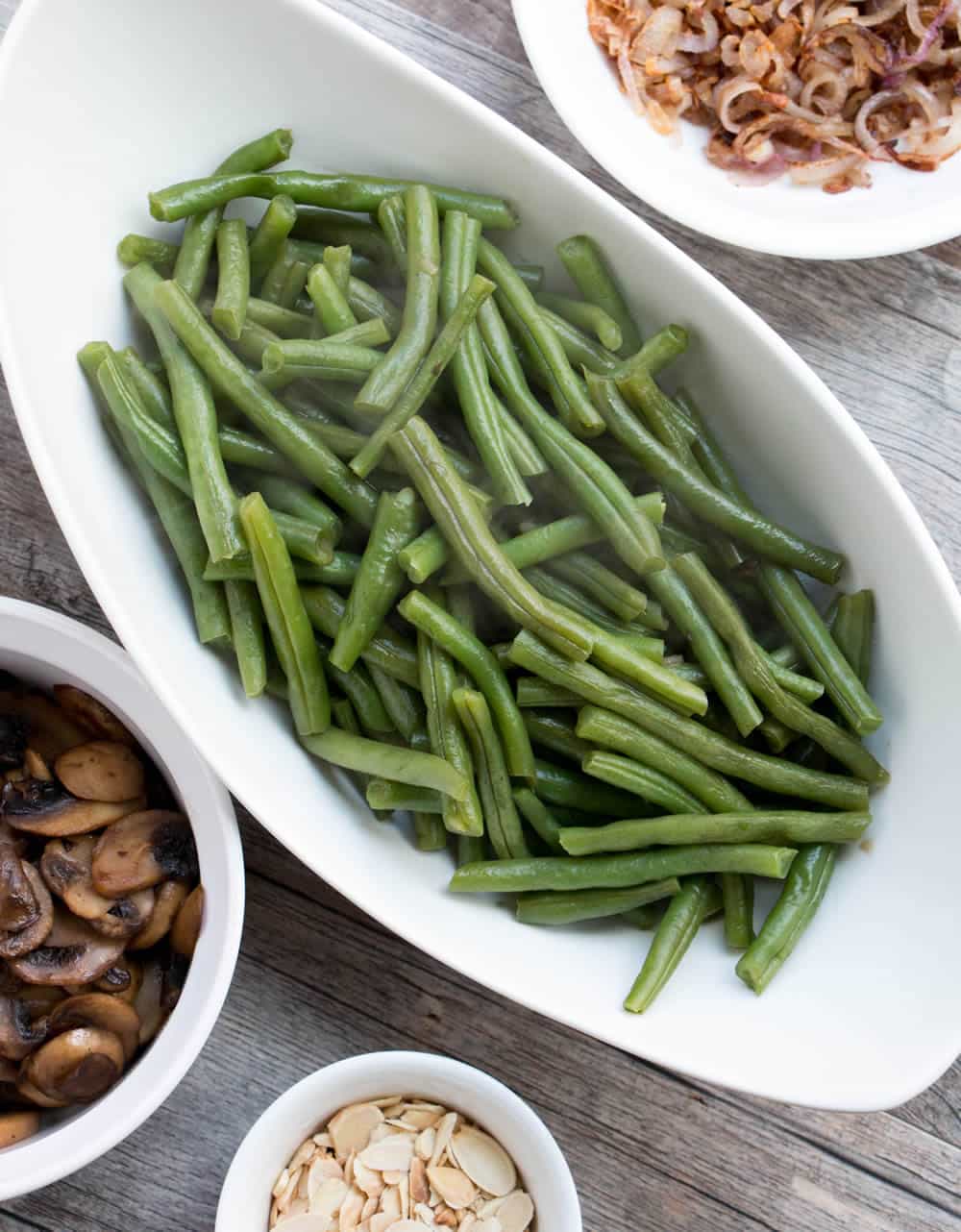 When the beans are cooked to your desired tenderness, you’ll add back in the buttery shallots and mushrooms and toss the whole thing together. My photos show them layered in the serving dish just to highlight the individual ingredients, but you’re going to toss them together in the pan; you definitely want all of those good flavors to get distributed all around the beans. Then you’re going to squeeze a little lemon juice on top and sprinkle with toasted almonds. 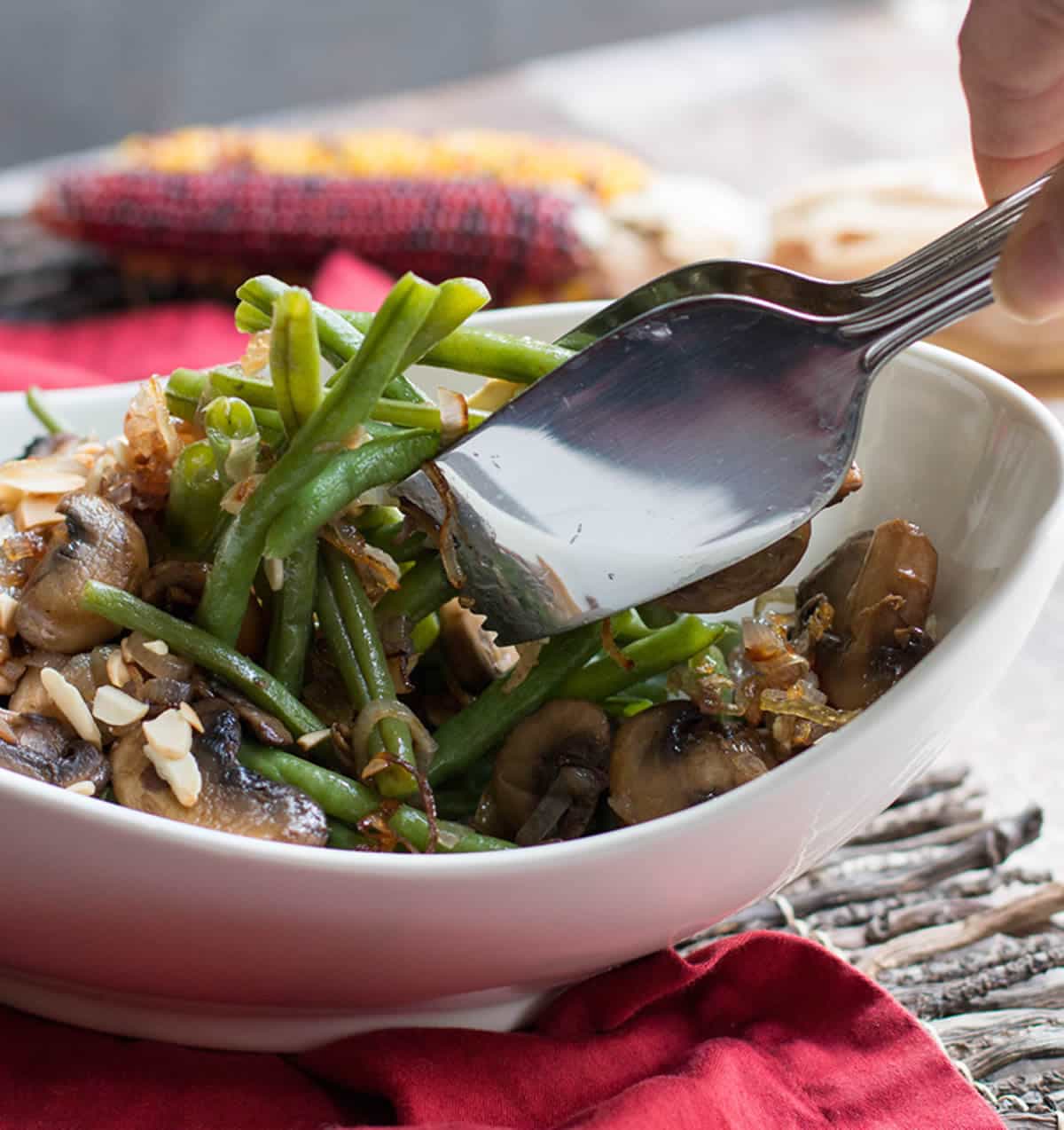 You’ll end up with a hearty green bean side dish that’s not too rich, and yet doesn’t outlaw a little browned butter. The mushrooms are meaty and plentiful. The shallots give a nice mild onion-y flavor. The lemon balances the butter and adds some freshness to the finished dish and the toasted almonds provide a little crunchy texture. It’s not as pared back as green beans amandine, but it’s not laden with lots of heavy ingredients.

One Pan Green Beans, Mushrooms and Shallots. It’s nice when a story 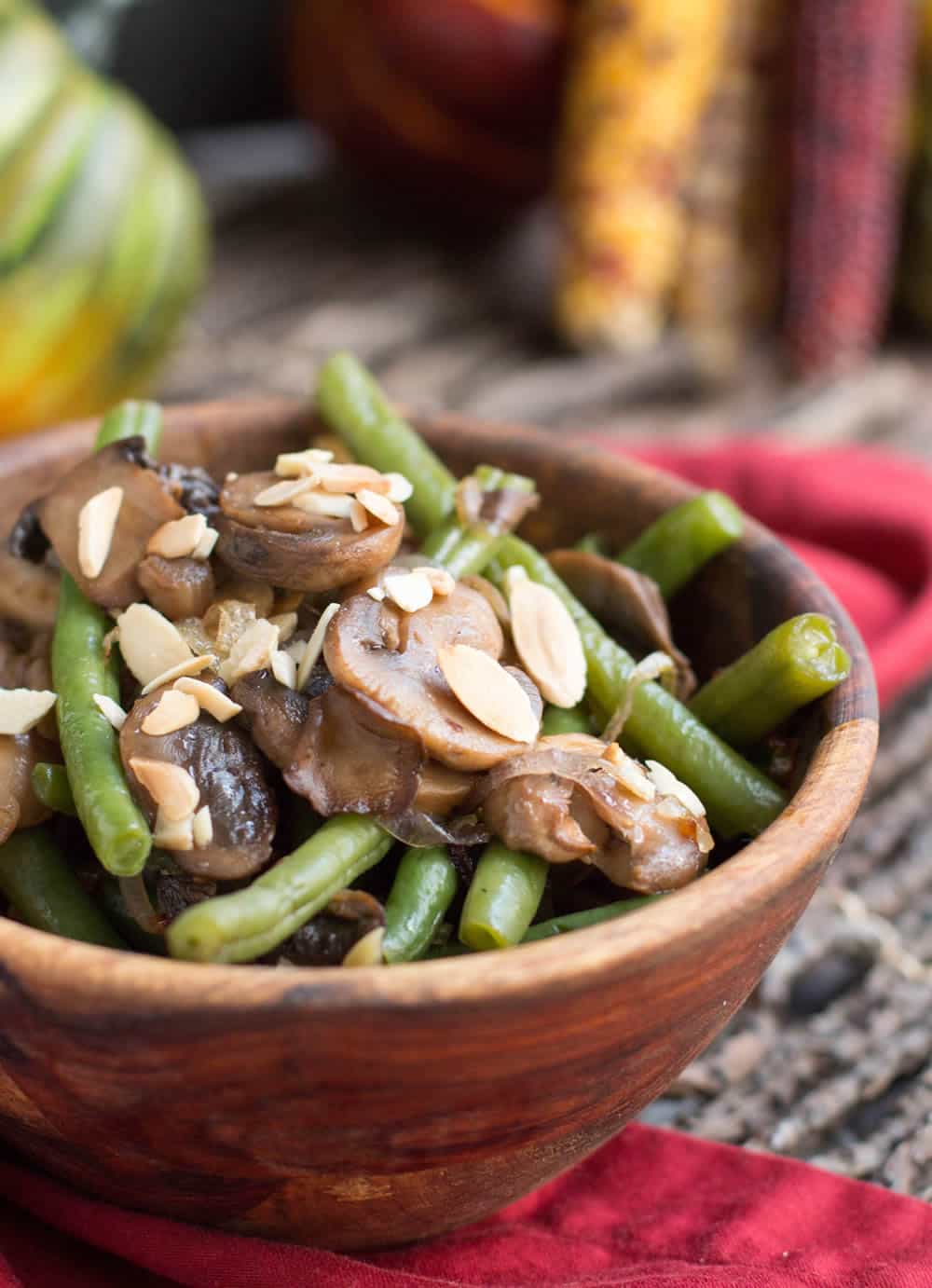 *If your water evaporates before your beans are cooked to your liking, just add another couple of tablespoons.

*If you like mushrooms but don't want them to be such a big part of the dish, cut the amount in half. Then, instead of sliced mushrooms, chop them into smaller pieces so that the smaller amount can disperse easily through the whole mixture.

*I used sliced white mushrooms, but you can use whatever mushroom you love or even a mix of different types.

*I used regular garden fresh green beans in these photos, but I would normally buy a bag of fresh haricot verts. Both are good, use what you love.

*I toast my nuts in the toaster oven, using my lowest toaster setting, which is "1." I repeat that setting until the nuts are just beginning to brown on the edges. Nuts can burn quickly and this helps me keep my eye on them. You can toast them in a dry frying pan on the stop top stirring until lightly browned.

*For best overall flavor, I have you season each layer of the recipe, the shallots, mushrooms and beans. Do so lightly, you can always adjust the seasoning at the end. If you use salted butter, decrease the amount of salt you use.

*I prefer making this right before serving, but you can make this dish ahead. Just under cook the beans in the final step a bit so that when you reheat them, you don't over cook them. You can reheat them in the microwave or regular oven in a large casserole dish (adding a tablespoon or so of water to help create some steam) until the dish is heated through and the beans are to your desired tenderness. Add lemon juice and toasted almonds just before serving.