Yikes! It’s the week of Thanksgiving! Do you know what you’re having for breakfast that day? 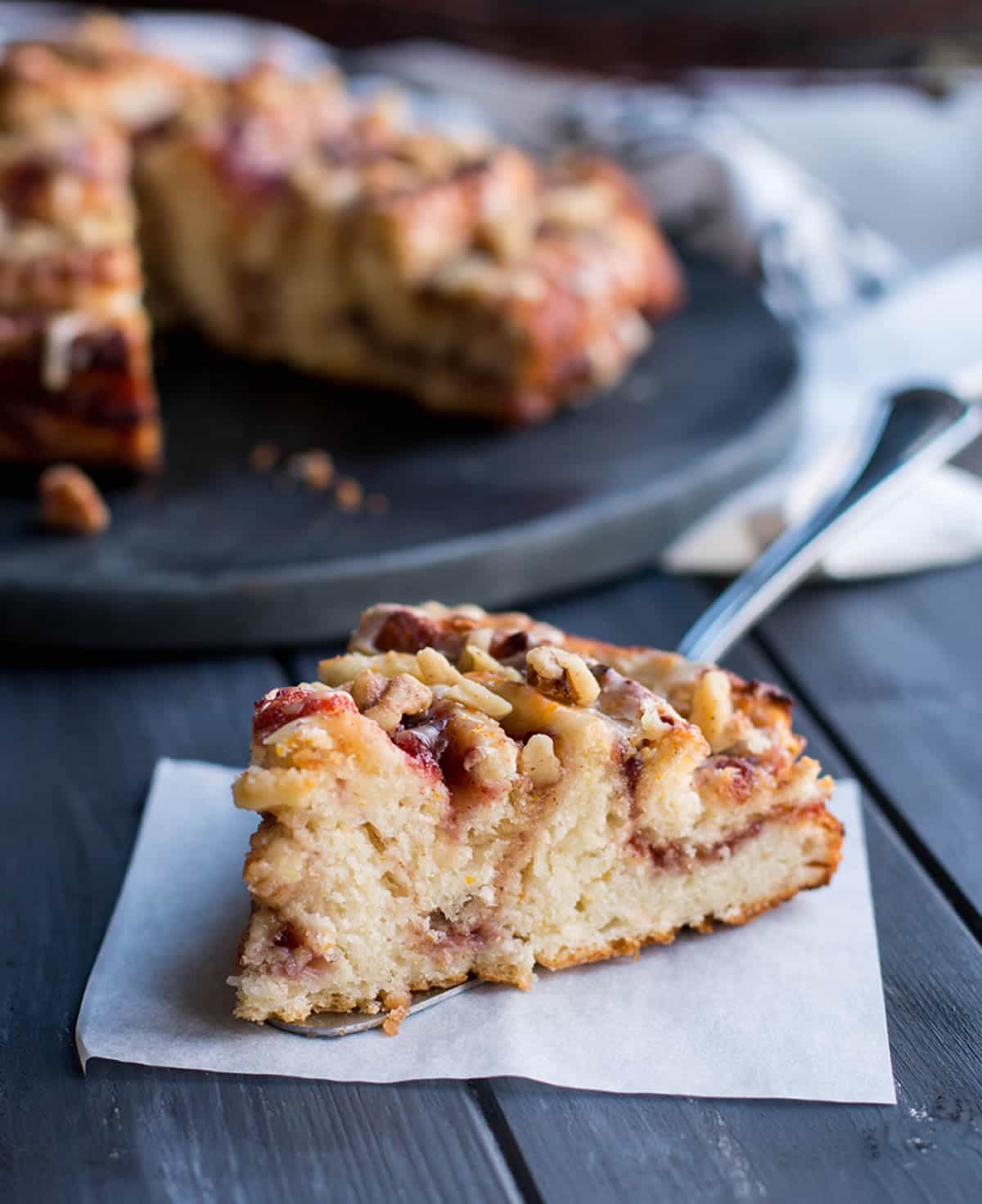 What?!? You haven’t even thought about it? Let me help you out with that…How about this Cranberry Orange Sweet Roll?

Why am I thinking about breakfast for the big day? Well, for the first time in quite a few years, I am not hosting the big meal. I have, however, been requested to bring a dessert :) And I’ve been thinking about that for that past couple of weeks.

You know I’ve been on a pumpkin streak with all kinds of treats, and wouldn’t you know that the hosts already have pumpkin covered? That’s cool. I’m ready to move on anyway. They’ve hinted at chocolate and I think that’s going to work out juuust fine. 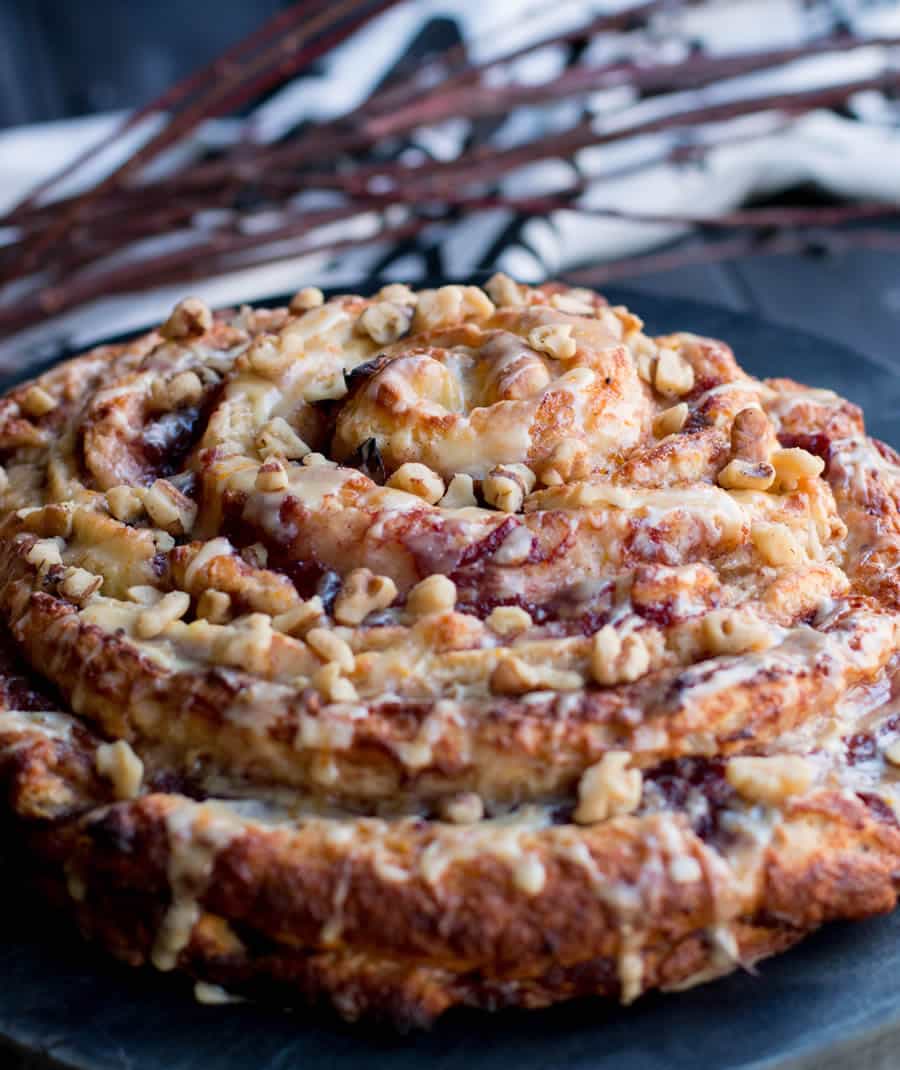 So about breakfast…I’m always thinking about what’s for breakfast. I had this idea that was not part of my original plan for this week, but as soon as I thought of it I had to try it out to see if it would work. That idea was this Cranberry Orange Sweet Roll.

You might think I’m crazy sharing this impressive looking pastry that seems like it would be so much work, but it’s really not a big deal. This lovely sweet roll is just the latest iteration of the millions of things you can make with Fluffy Buttermilk Biscuit  dough<<—Advice for the day: Learn how to make this dough! 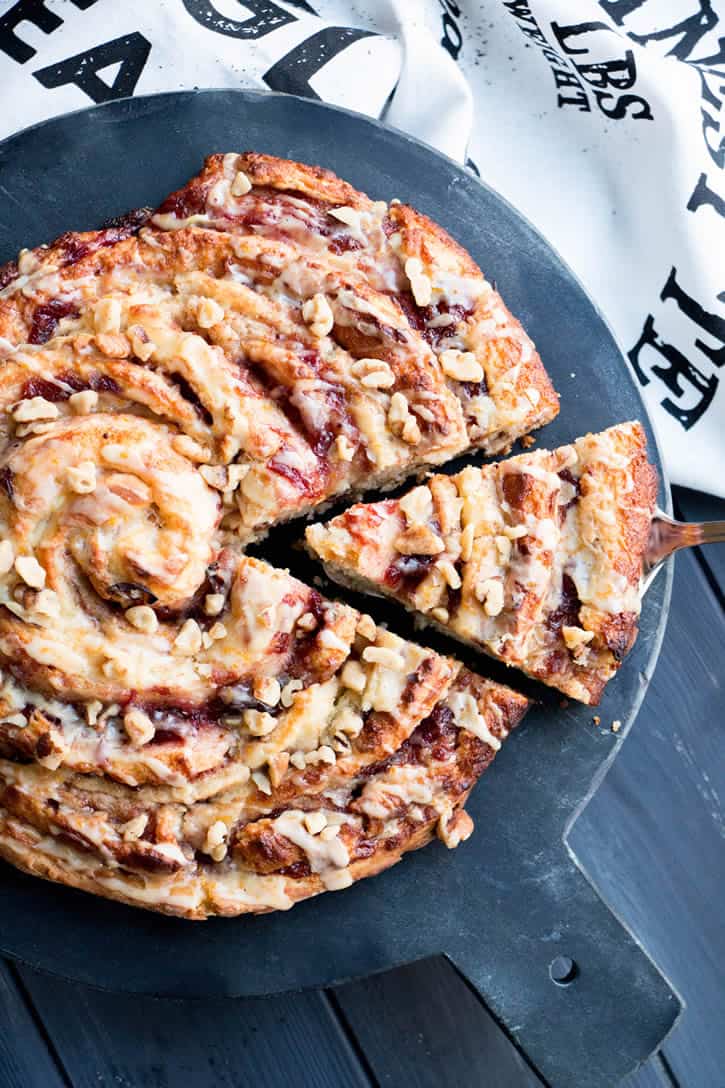 Inspired by the season, I was thinking about cranberries and oranges. That thought turned to cranberry orange relish and then, my thoughts somehow flipped to breakfast and then I was thinking about Thanksgiving leftovers and everything sort of mashed together in my mind.

I thought, what would I do with leftover cranberry sauce? I might have been thinking that because I made a mini Thanksgiving dinner last week. That’s right. I figured I’d already made the green beans for the blog, why not add a little turkey and mashed potatoes with gravy and some cranberry sauce? 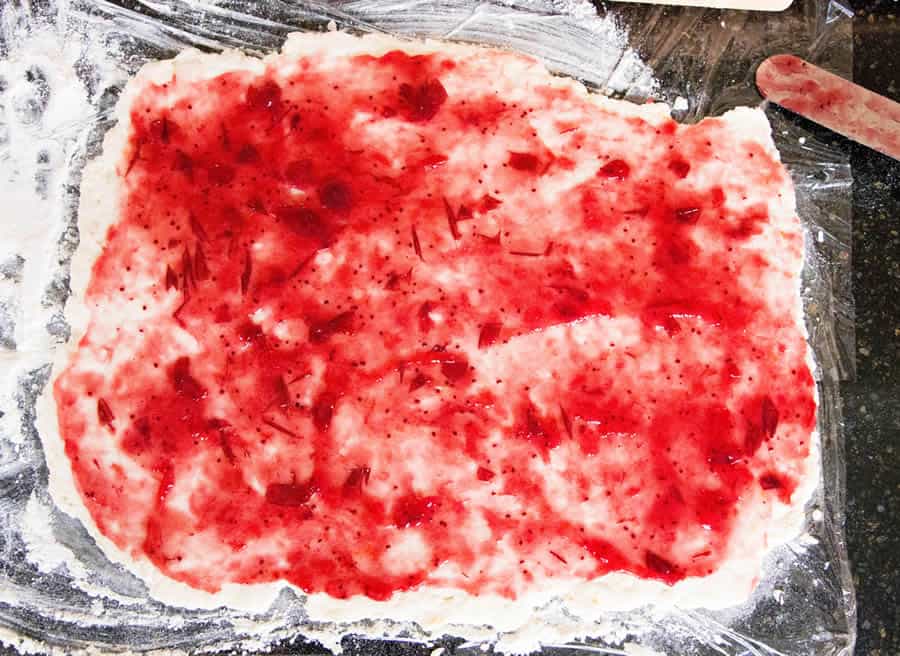 That’s how I ended up with leftover cranberry sauce a week before Thanksgiving. I decided I wanted to bake with it. So I made a batch of biscuit dough, but infused the buttermilk with some orange zest.

I actually like making my own, but for my mini Thankgiving dinner, I went with the short cut. Then, I sprinkled some sugar mixed with cinnamon, all spice, cardamom and cloves all over the cranberry sauce. 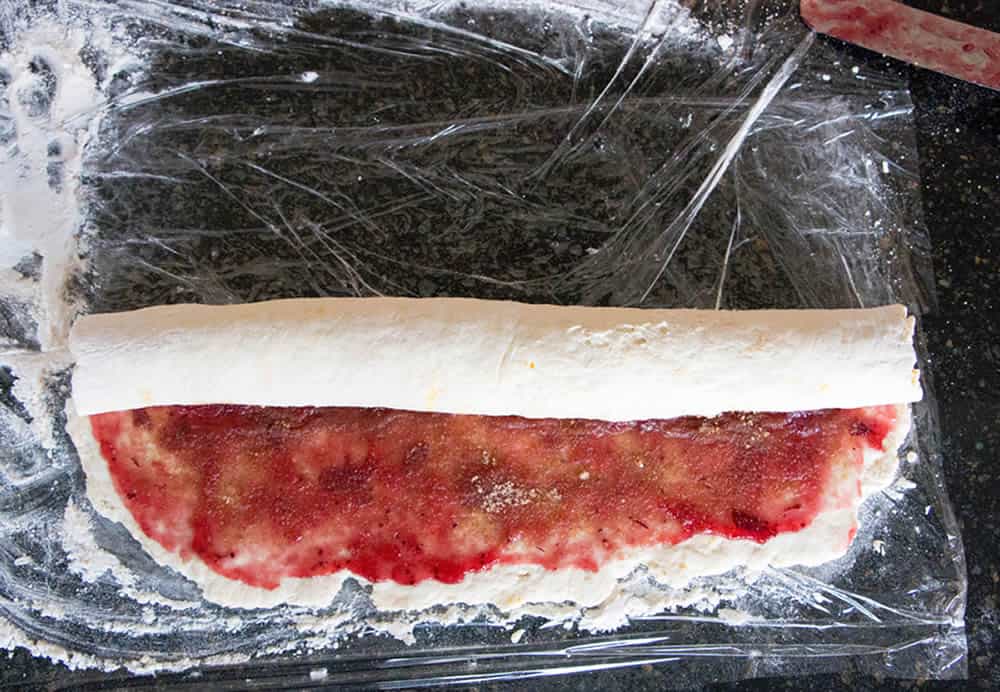 Roll it up, just like you would for cinnamon rolls. At this point, I decided I would stash it in the refrigerator to make sure it was cold. Remember, you always want cold butter in your biscuits when you bake them.

My dough had been out longer than normal since I was taking pictures in between each step. I use plastic wrap on my counter where I roll, so it was easy to just wrap it up with that and put it in the refrigerator (or the freezer) until the butter firmed back up. 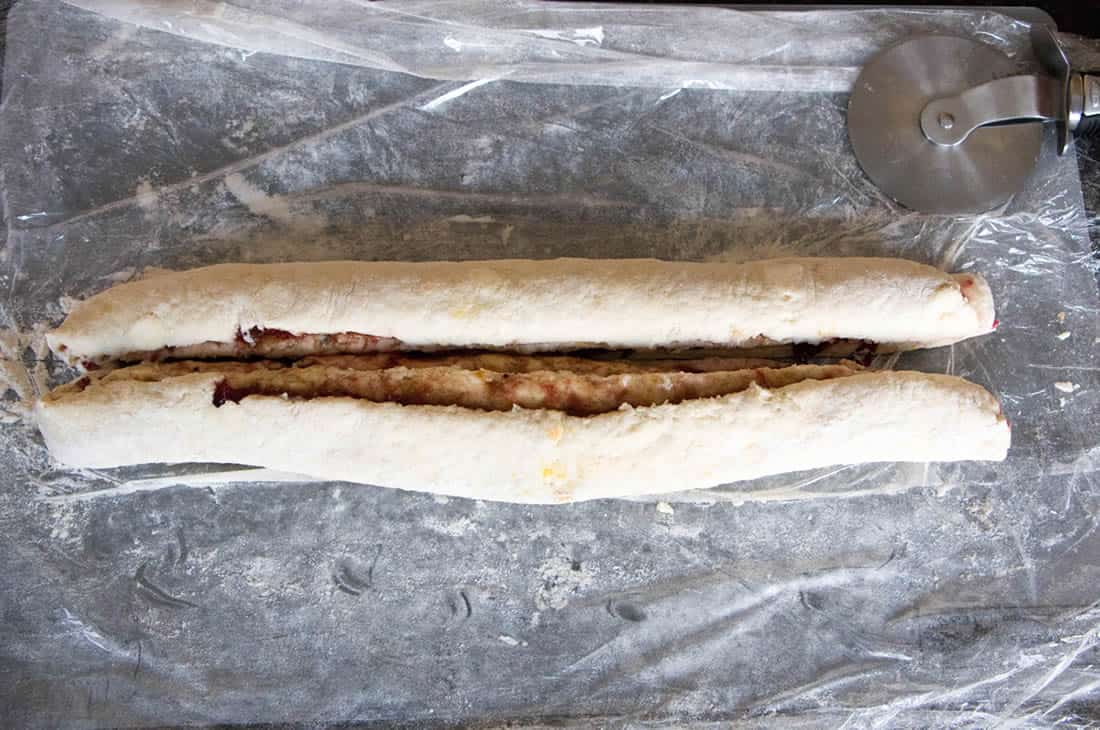 Then, just unwrap the roll and place it onto your baking sheet. Using a sharp knife or a pizza cutter, slice the roll in half lengthwise. (These photos show mine still on a cutting board on the counter.

It’s much easier if you cut it on the tray you’re going to bake it on so that you don’t have to move the roll from the counter to the pan.) 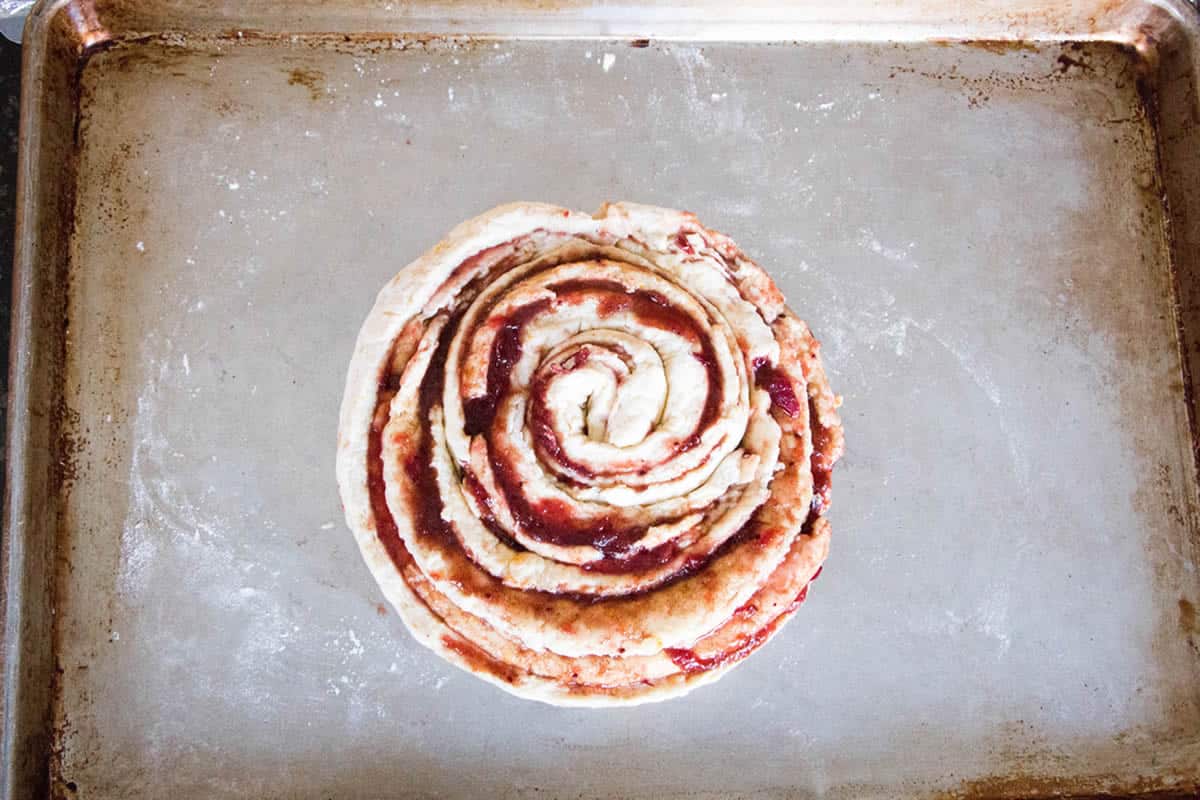 Now at this point, I had grand plans for a twisted fun design, but the cranberry sauce stopped me in my tracks. It was a little oozy, so I quickly formed the one half into a spiral and then wrapped the second half around that. I looked at it and thought, hmph! Well, that’s not going to be pretty.

However, I thought that very same thing about the Buttermilk Biscuit Cinnamon Rolls before they went into the oven and they turned out bea-u-tifully… so I crossed my fingers and put it in the oven. 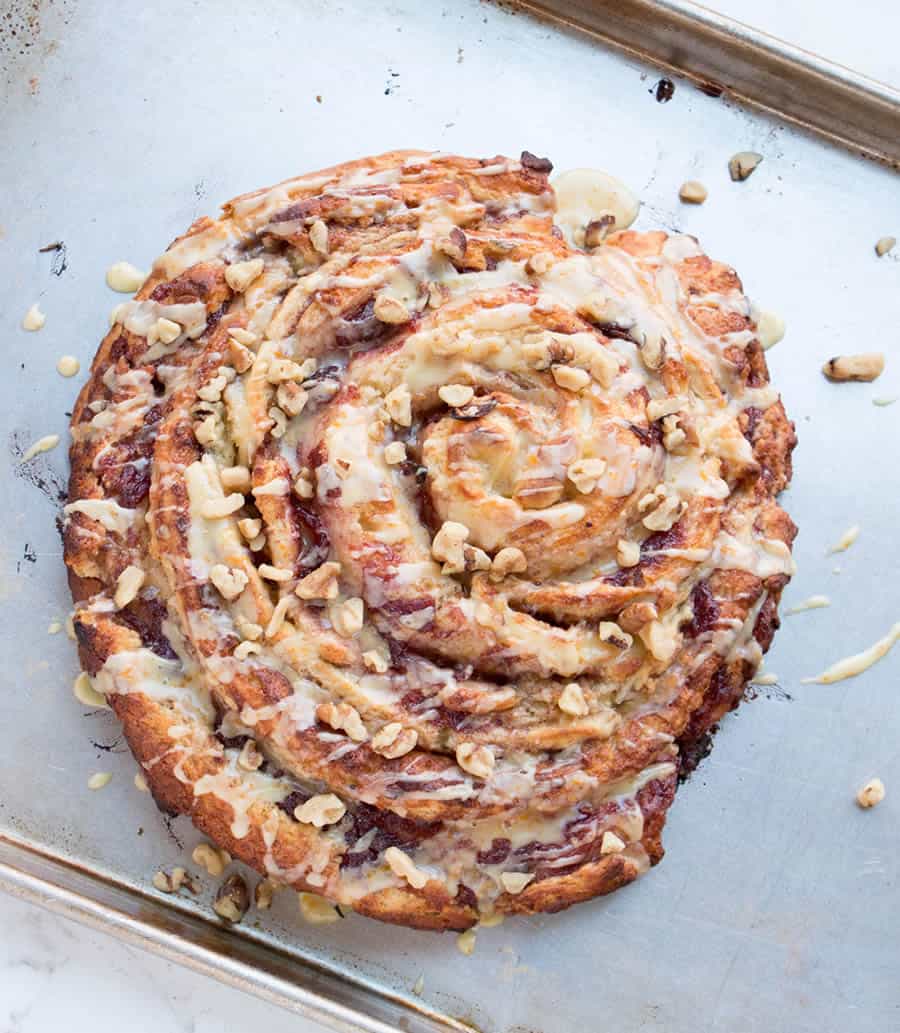 And look what came out! A giant Cranberry Orange Sweet Roll! I wasn’t quite done yet; I still had to top it. I made a glaze with orange zest and orange juice and drizzled it over the whole thing while it was still warm.

I sprinkled some toasted walnuts over the glaze and voila! A beautiful breakfast pastry that looks, well, almost professional, no? I would say that it looks like you bought it at a bakery, but let’s be honest, how many amazing bakeries do you live near? You know, bakeries that make things from scratch with good wholesome ingredients? Bakeries that don’t live inside a grocery store?

I am always on the hunt for the good ones. They’re hard to find. There’s this one bakery near where I grew up in Ohio that makes strudel. That’s it, just strudel. And, oh my gosh, it is the best strudel I’ve ever had! I always pick some up when I go home to visit. But I digress…let’s get back to our pretty sweet roll. 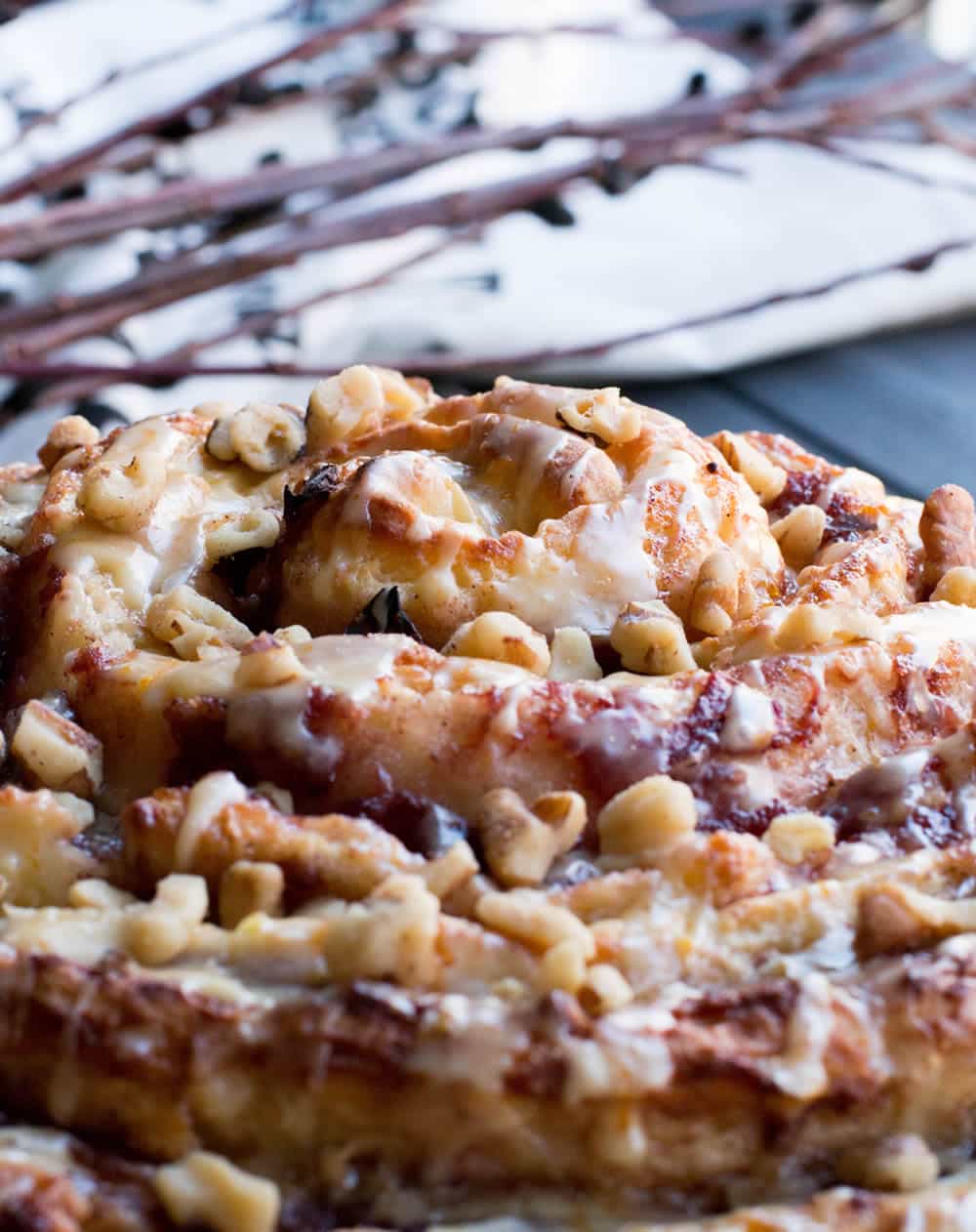 No, it’s not a perfect circle. It won’t be. Instead, it will be a little free form, a little rustic and perfectly sliceable. You’ll have the spiced cranberry sauce swirled throughout and lots of fresh orange flavor to brighten up the whole thing.

What’s really interesting is that it’s not reminiscent of any of the other biscuit creations I’ve made. At least not for me. It transformed into a completely new pastry. I’m not sure anyone would even guess that you made it with biscuit dough, if you didn’t tell them.

You might be completely tied up with cooking for the big day, and adding this Cranberry Orange Sweet Roll to your list just isn’t feasible.

But when you’ve finished celebrating the day with family and friends, and you’ve got leftovers of this, that and the other thing, you’ll have at least one new idea of what to do with the leftover cranberry sauce. 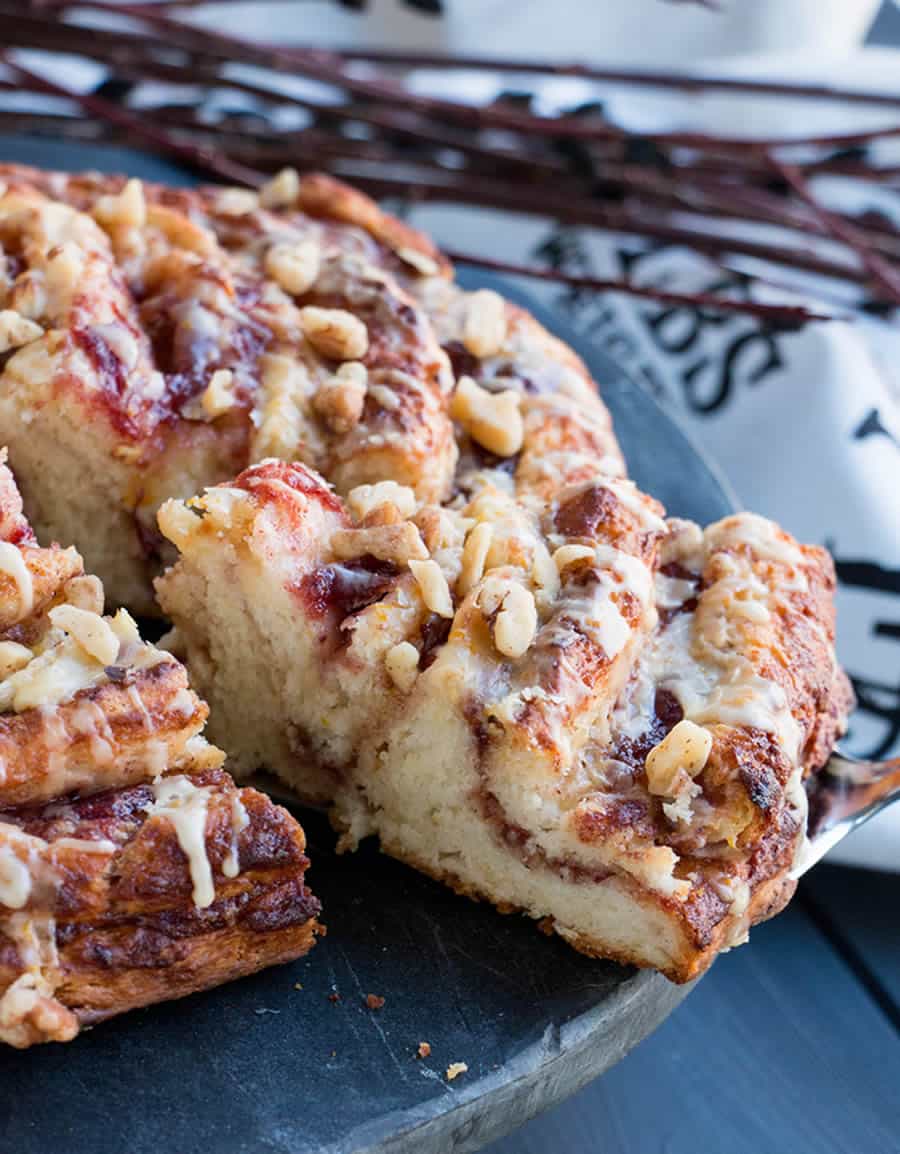 For the spiced sugar mixture:

*When you form the spiral, it can be a little looser than what my photos show. The second time I made it, I left a little bit of space and the biscuits puffed up while baking to fill it.

*Covering the roll with a piece of foil for the last minutes of baking will help it from getting too brown while giving the center of the roll a little extra time to finish baking.

*If you like lots of glaze, double the recipe for it.

*I used a cooked cranberry sauce that had a jelly consistency. This worked better for me than the kind that comes out of the can, shaped like a can. The gelled can version still worked, but the jelly consistency of the Trader Joe's version made for a juicier filling. If you use a cranberry sauce that has whole cranberries, you'll want to chop them down a bit so they fit nicely into the roll. If your cranberry sauce is very wet, let it sit in a mesh strainer to remove the excess liquid so that it is not drippy or you could cook it until the water parts evaporate. You just don't want watery. It shouldn't be a raw relish kind of cranberry sauce. It should be thick like jelly.

*Don't be tempted to make a thick layer of cranberry sauce. Too much wetness in the dough will make it harder to bake up into fluffy layers.

*I tried using cranberry sauce with no sugar/spice sprinkled on top and that also worked, but we did like it better with it.

*Not a fan of cranberry sauce? Use your favorite jam/jelly! Then make a glaze that complements it. You can make all kinds of flavor combos! I'm sure I'll be posting more flavors in the future.

*If you don't want the orange flavor to be too pervasive, you can omit the zest from the glaze. If you don't want any extra orange at all in the topping, skip the zest and substitute water for the orange juice. We liked all of the orange additions, but it can compete with the cranberry sauce. We tried it without the orange in the glaze and we liked it better with it than without.

*Store leftovers at room temperature wrapped in foil. Reheat in a toaster oven to revive it. I love it best fresh, but leftovers are still quite good once reheated.