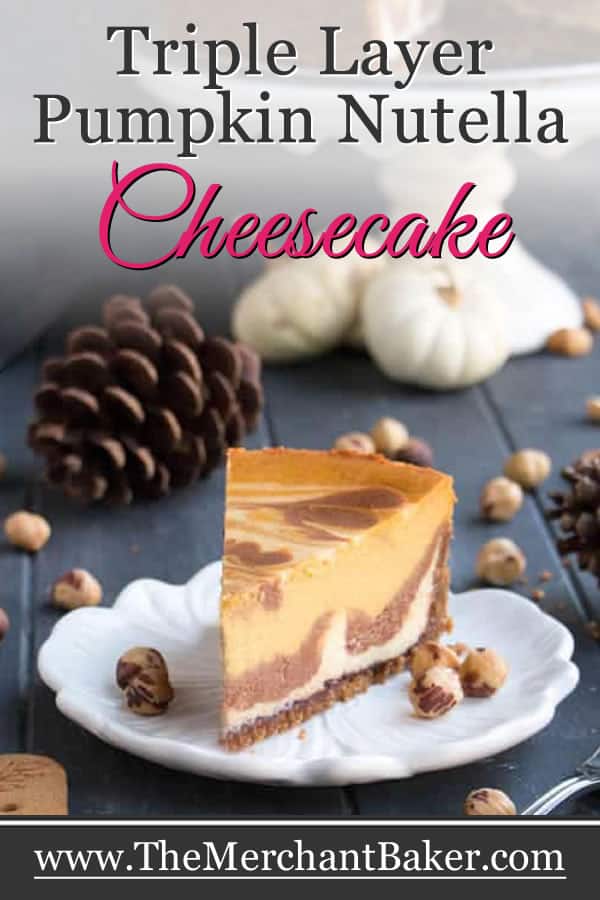 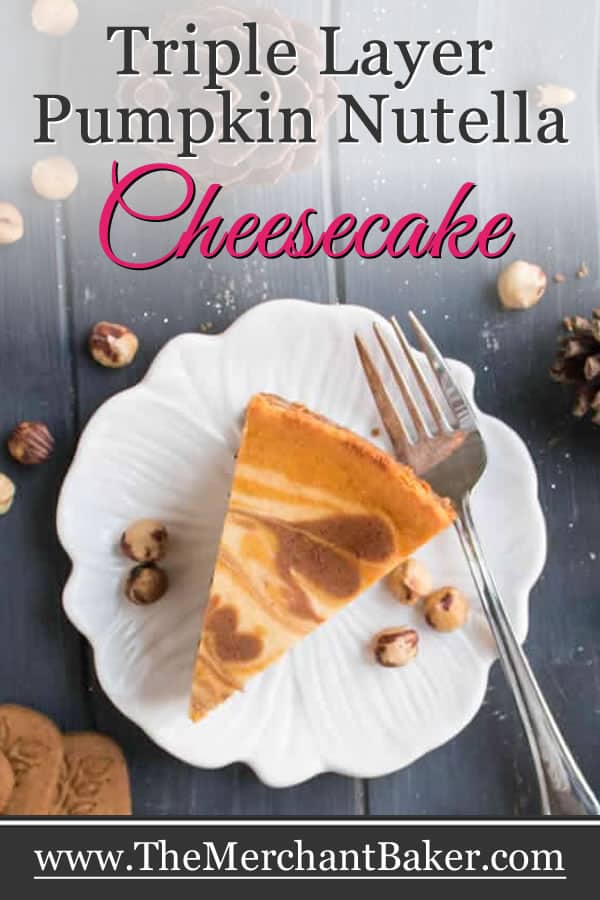 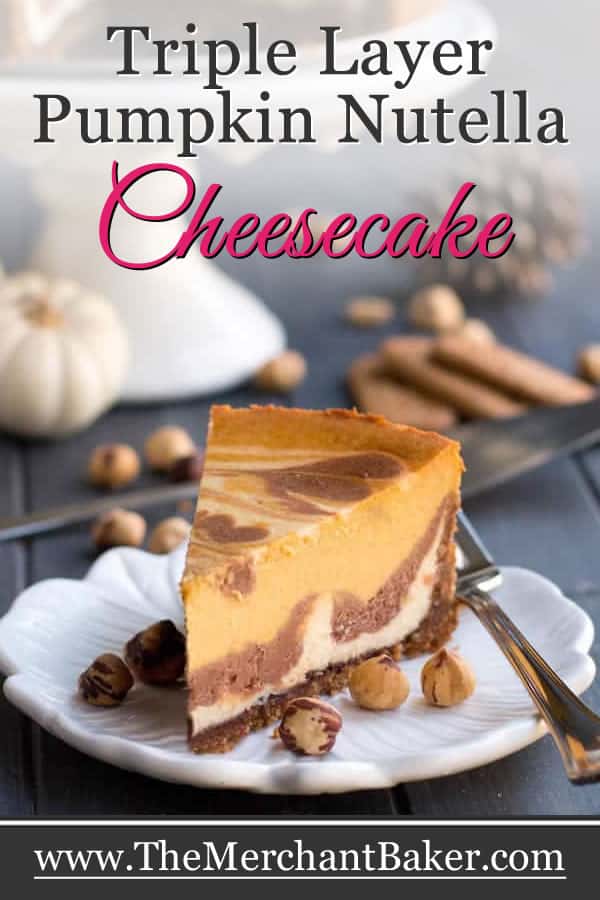 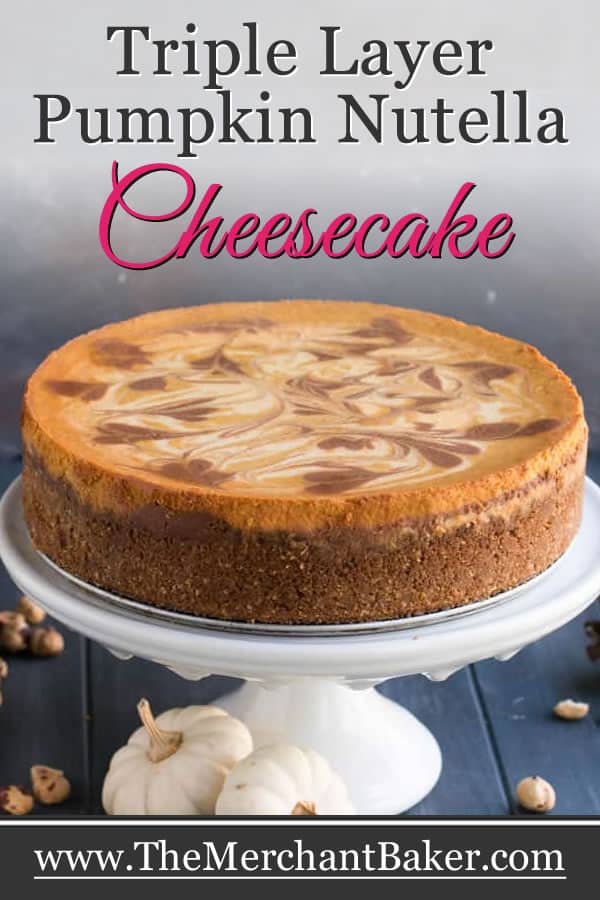 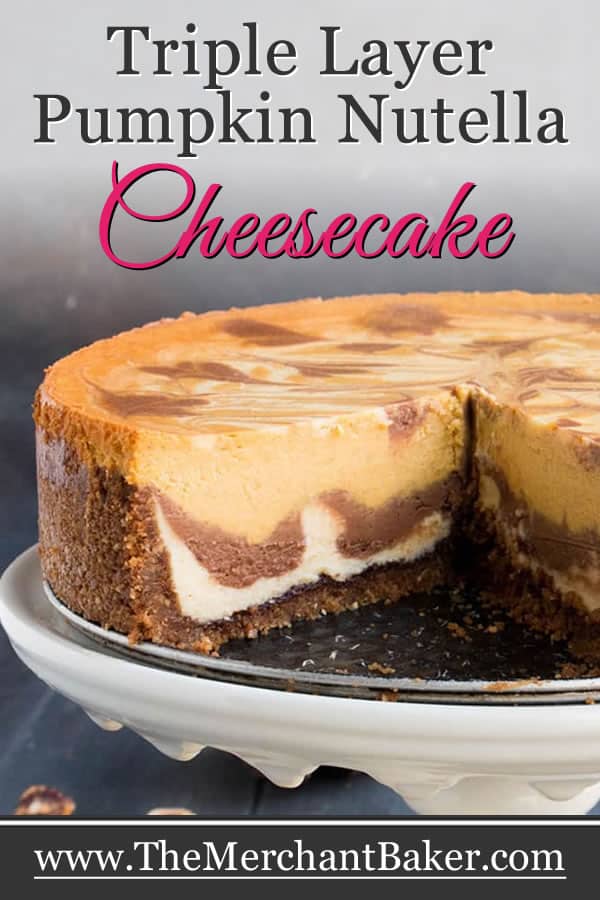 This Triple Layer Pumpkin Nutella Cheesecake was originally going to be a simple pumpkin cheesecake. 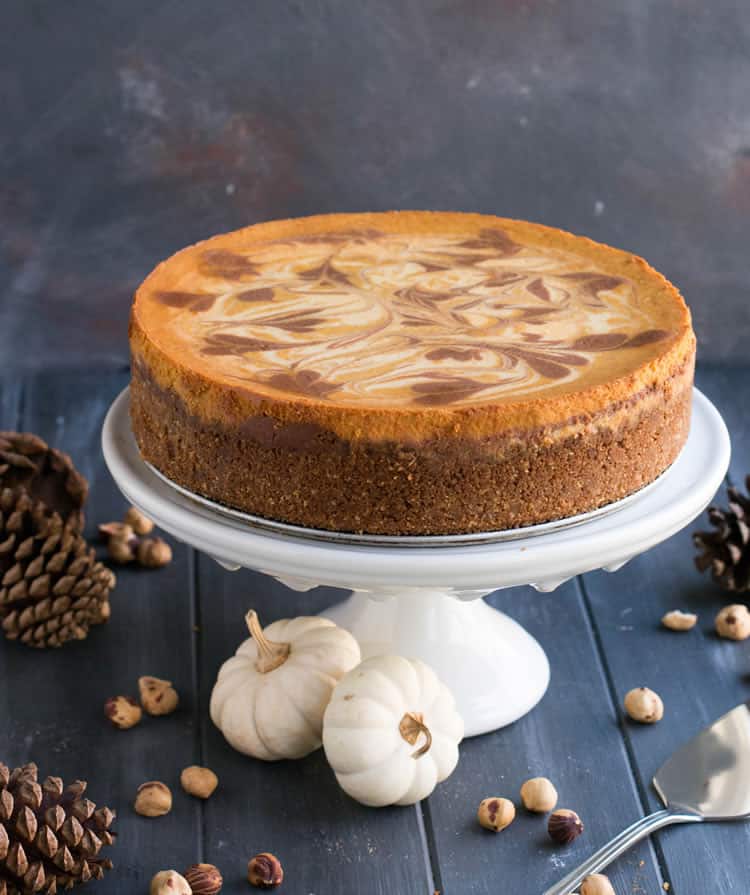 But, having just made a classic pumpkin pie with no major bells or whistles, save for the brown sugar cinnamon whipped cream, I thought I should step it up a bit. You know, make this cheesecake just a little more special.

It is the holidays, after all. It’s the time when aaaallll the food gets dressed up and ready to wow. That’s what makes it kind of fun, anyway, doesn’t it? It’s what separates celebration dinners from the every day dishes we see the rest of the year. 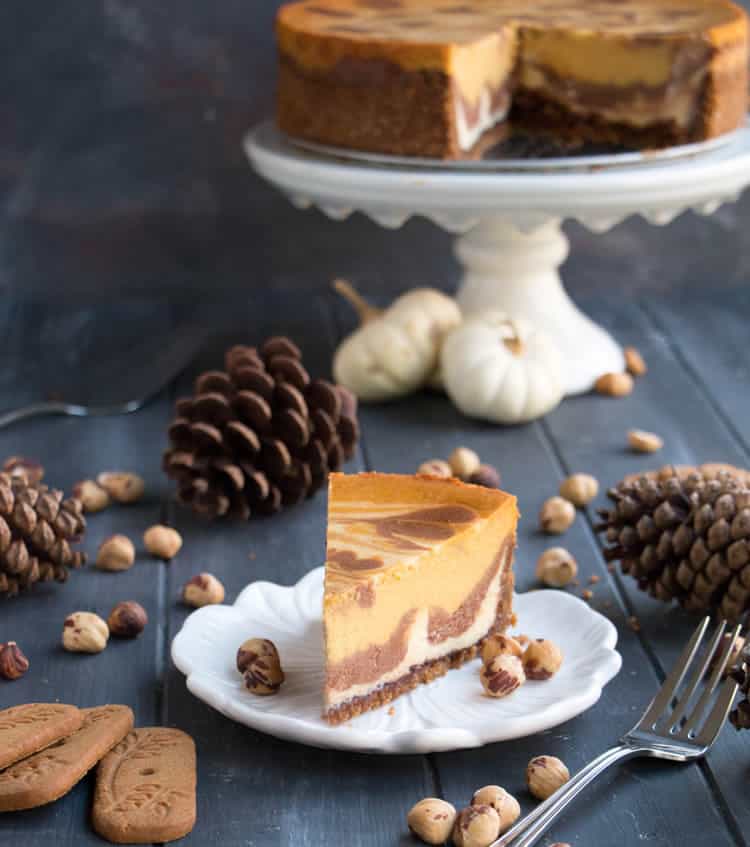 I decided that a whole pumpkin cheesecake was going to be just too much pumpkin if it were sitting next to pumpkin pie and the inevitable pumpkin rolls that we all love. So I mixed it up a little. I decided that I wanted layers of flavor. 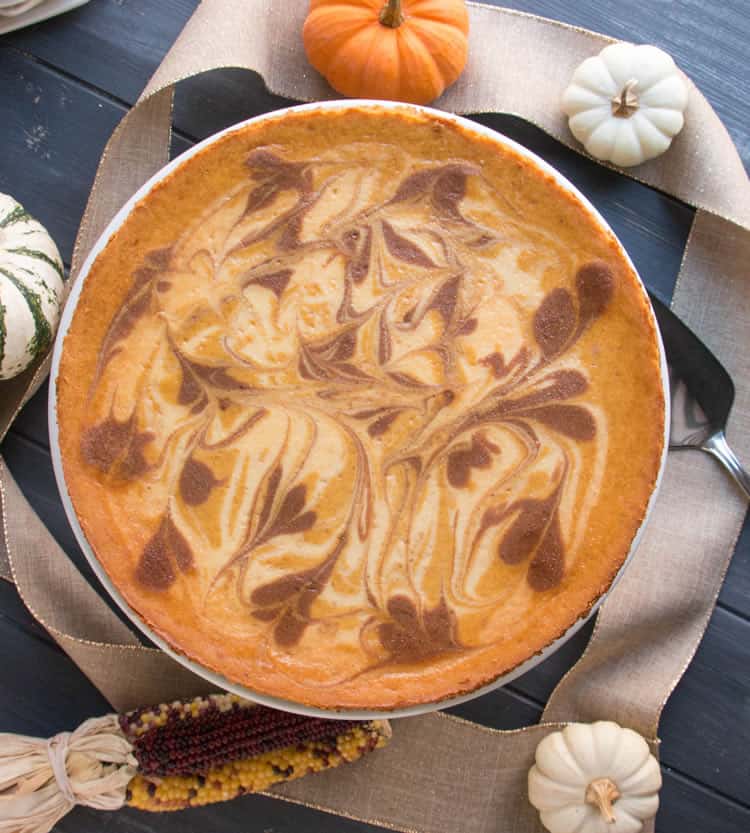 So, having already planned pumpkin and plain, I decided to go with Nutella as the third flavor. I do love pumpkin, Nutella and cream cheese together. That flavor combo is amazing in my Pumpkin Muffins with Nutella Cream Cheese Swirl.

Then, because of the Nutella, which we all know is a chocolate hazelnut spread, I decided to add hazelnuts to the crust. But I didn’t just go with a graham cracker crust, much as I love it. I went with a speculoos cookie crust!

The following paragraphs contains affiliate links. We are a participant in the Amazon Services LLC Associates Program, an affiliate advertising program designed to provide a means for us to earn fees by linking to Amazon.com and affiliated sites. 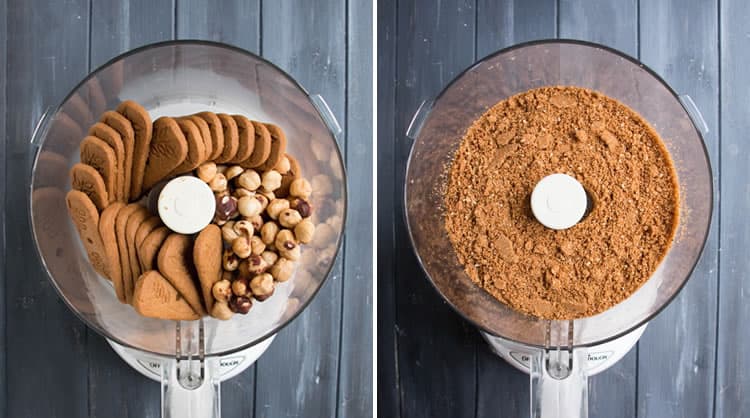 What’s a speculoos cookie? It’s a traditional spiced cookie from Belgium. They’re crispy, rich in color and have a caramelized flavor to them.

You might be most familiar with the brand that makes Biscoff cookies. I happened to use Trader Joe’s version for this recipe, but both are good.

Just use a food processor to grind the cookies and nuts to fine crumbs. (There’s some brown sugar in there as well, it just didn’t make the photo.) Add the melted butter, process and you’re ready to get the crumbs into the pan. 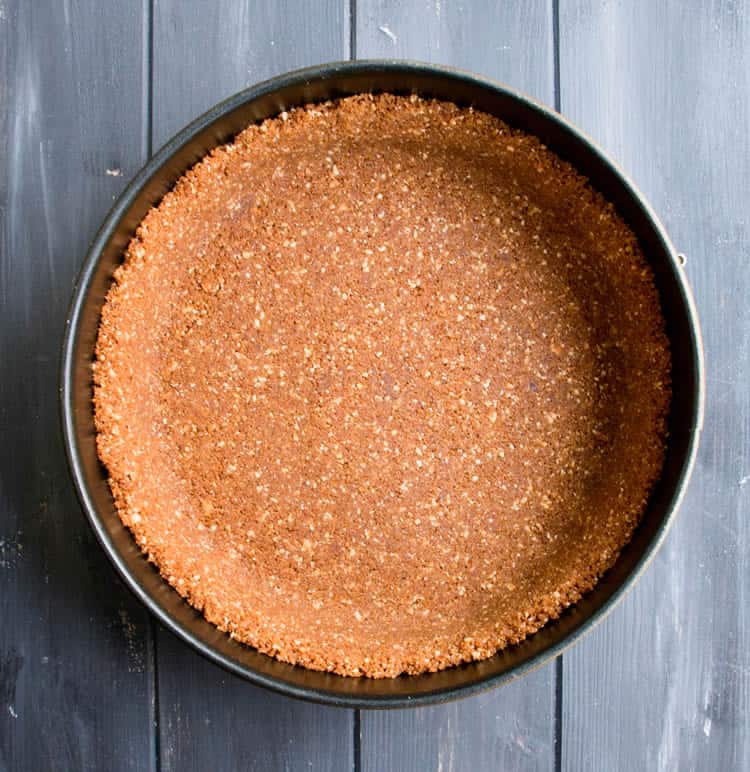 See how neatly my crust has been pressed into the pan? I didn’t use my hands to press the crust. I used the bottom and side of a metal measuring cup. It makes the process so much easier!

Once the crust has been evenly and firmly pressed into the pan, it gets pre-baked, just for 8 minutes.

When it came out of the oven, I decided to add a bonus layer of straight Nutella. I just dolloped spoonfuls of it right onto the hot crust. After a minute or two, once the Nutella had time to soften, I gently spread it over the crust.

You do need to be careful at this step. You don’t want to disturb the bottom crust. I learned that as I was spreading. I did break through a couple of times and panicked a little.

But, I just put the bit of crust back into place and gently plastered over it with the Nutella. No harm, no foul.

You can actually see some of those loose crumbs in my Nutella layer. Trust me, you won’t be able to tell at all once the whole thing is done. 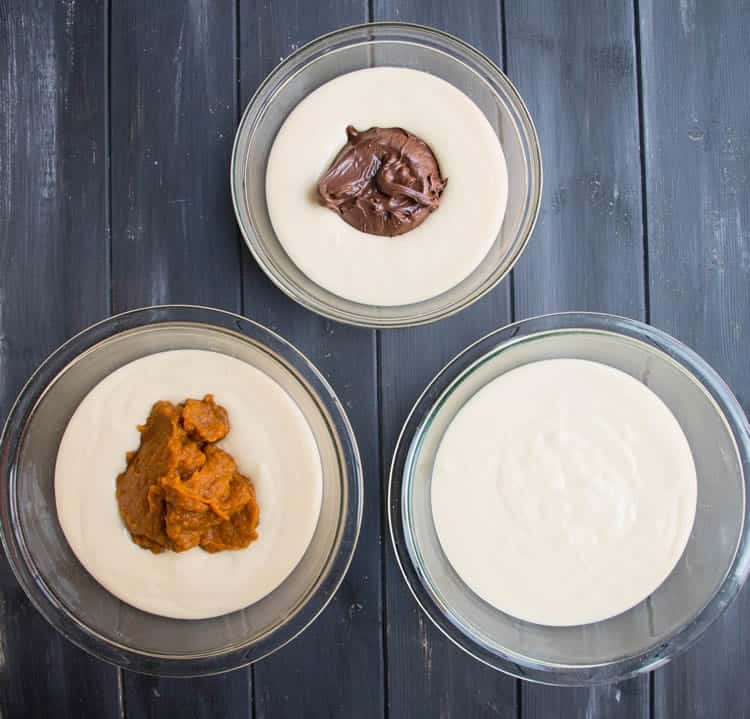 Onto the cheesecake layers. There are some lengthy directions in the recipe, but don’t let that intimidate you. Those of you who’ve been following me for awhile know that I’m prone to detailed instructions. I try to answer questions I think you might have as I’m writing the recipe, so there’s extra information, especially for those who don’t bake often.

One will get pumpkin puree and pumpkin spice added to it. And the third will get Nutella mixed into it. That’s it. Three flavors!

Then, because you’re going to want a fancy top at the end, you’ll reserve a little of the plain and Nutella batters.

When it came time for layering, I thought about which batter would be the heaviest and how they might sink into each other. I won’t get into the whole thought process. At the end of the day, I decided to put plain on the bottom, then the Nutella layer, then the pumpkin layer.

I just crossed my fingers and hoped things wouldn’t sink strangely while it baked. (Spoiler Alert: Everything was awesome!) 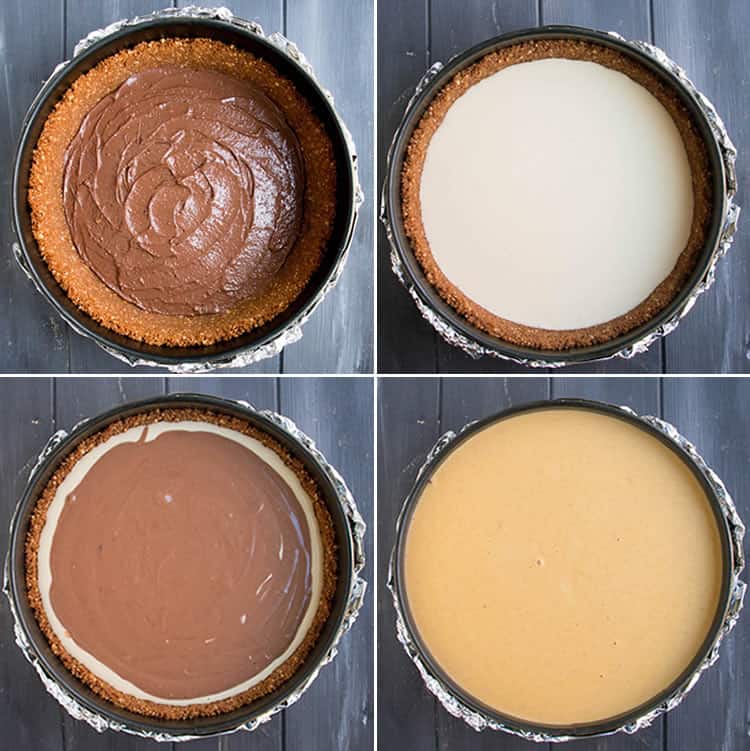 Now for that pretty marbled top. It’s so easy, anyone could do it. And honestly, since daylight for photography was quickly fading on me, I just did a simple swirl design.

I started with the plain batter and just drizzled ribbons of it randomly over the top. Then, I dropped small spoonfuls of the Nutella batter randomly in little puddles.

The next part is the fun part. Just use a tooth pick or the tip of a sharp knife to pull and swirl the design. If you’ve never done this before, start by pulling the tooth pick through one of the Nutella puddles.

You’ll see the batter quickly turn into a heart like shape. That’s the basic idea. Just drag your toothpick in swirls around the top of the batter while making sure you pull through all of the Nutella puddles. 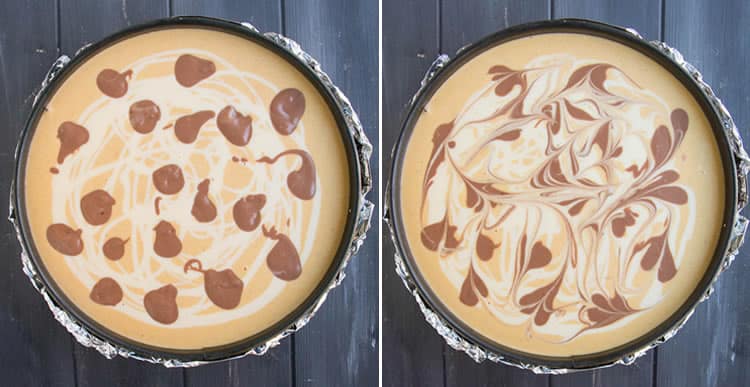 This is going to be so much fun, you might not want to stop. But, restrain yourself and stop as soon as it looks good to you. Continuing to swirl and swirl is simply going to mix it up. Eventually, you will lose the definition of your swirls. So don’t do that.

I have to say, though, since I’ve made this Triple Layer Pumpkin Nutella Cheesecake, I’ve had so many other far less random ideas for designing the top! It’s making me crazy! I want a do over! 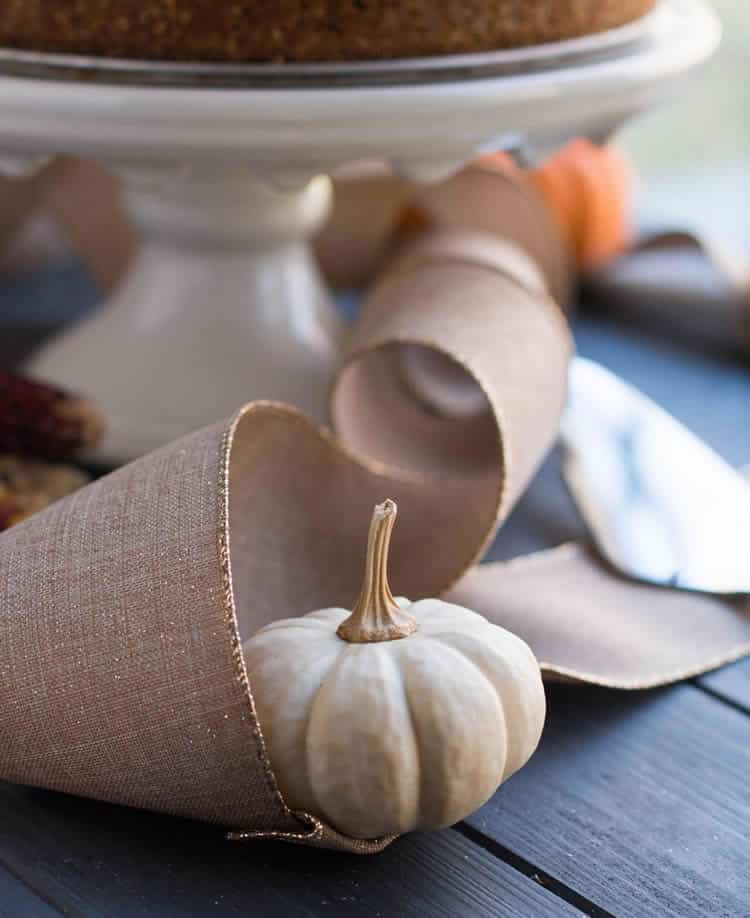 And yet, I have absolutely no need to make another big cheesecake…just to make a new design on top.

See? This is why my recipes are never ever permanently “done.” There’s always another idea, a variation or a twist that I want to try.

But you? You still have a chance ;) Don’t get me wrong. I love how pretty the swirl design is. It’s just that now I have a whole different idea!

If you want some inspiration, look up some of the simpler designs people do with steamed milk in coffee drinks. Or write your name on top or something. You know, get creative!

The baking process is pretty cool. I got it from Ina Garten’s cheesecake recipe. I’ve made that recipe to rave reviews many times. But, one of the things I love about it is the baking process.

I love that the process does not require a water bath. You just simply bake it at a high temperature for 15 minutes. This sets the top. Then you reduce the temperature pretty significantly and bake it low and slow for another hour and fifteen minutes.

Finally, you turn the oven off, open the door and let the cheesecake cool down gently in the still warm oven.

That’s it! The cheesecake doesn’t sink. It doesn’t crack. It bakes up perfectly! No fuss. No worry! 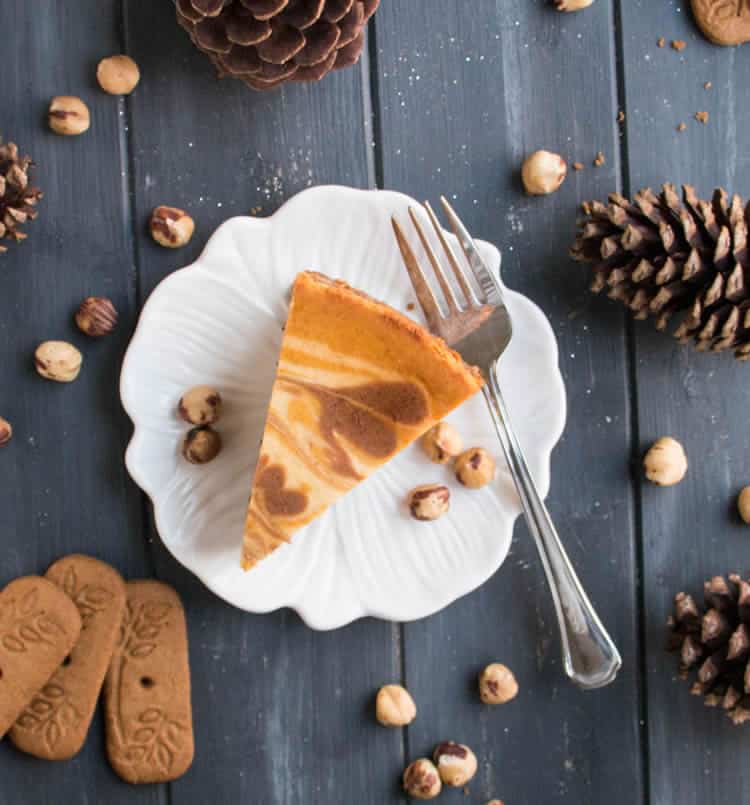 Then it has to completely cool before you refrigerate it. Cover it and serve it the next day or even two days later. I actually think it tastes better two days later. So, yes. This is a perfect make ahead dessert!

You can see from the photos how beautifully this Triple Layer Pumpkin Cheesecake turned out! From the pretty design on top to all of the layers beneath it. There’s a nice little rippled effect from how the layers baked up, nicely mimicking the swirly top. 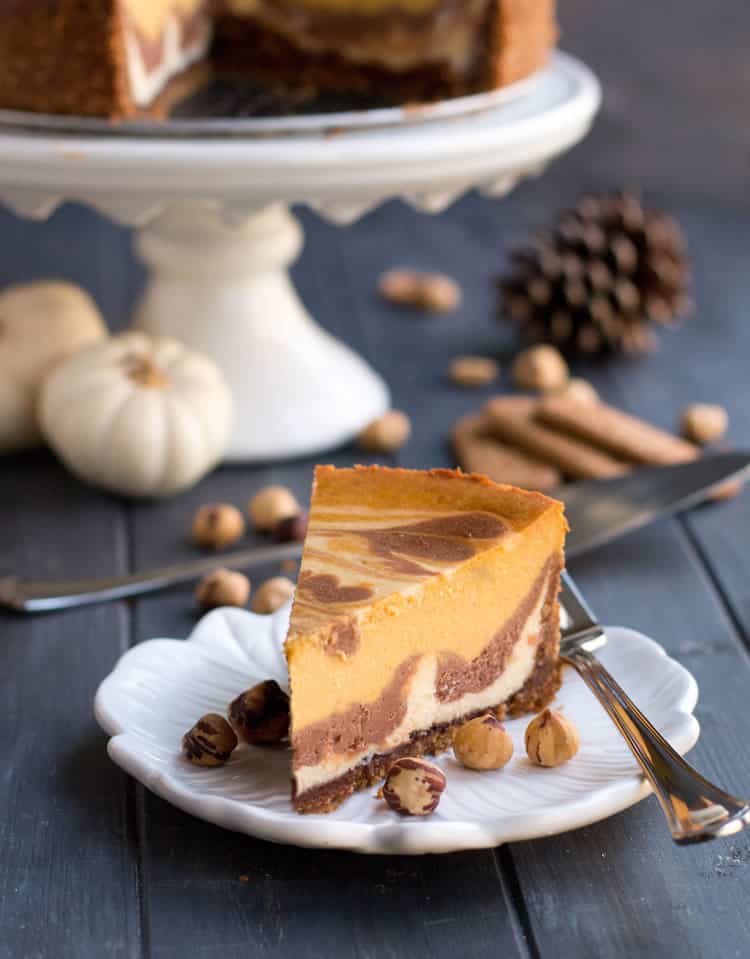 And the flavor? Smooth and creamy. There’s not too much of any one flavor. Just enough pumpkin for that hit of seasonality, just enough plain to ground it and just enough Nutella to make it different.

There’s even that thin bonus layer of pure Nutella on the bottom! All of that sits on a nutty spiced cookie crust.

Yep, it’s special from top to bottom. And it tastes as good as it looks.

So, it’s time to call it. One dressed up pumpkin cheesecake for Thanksgiving? 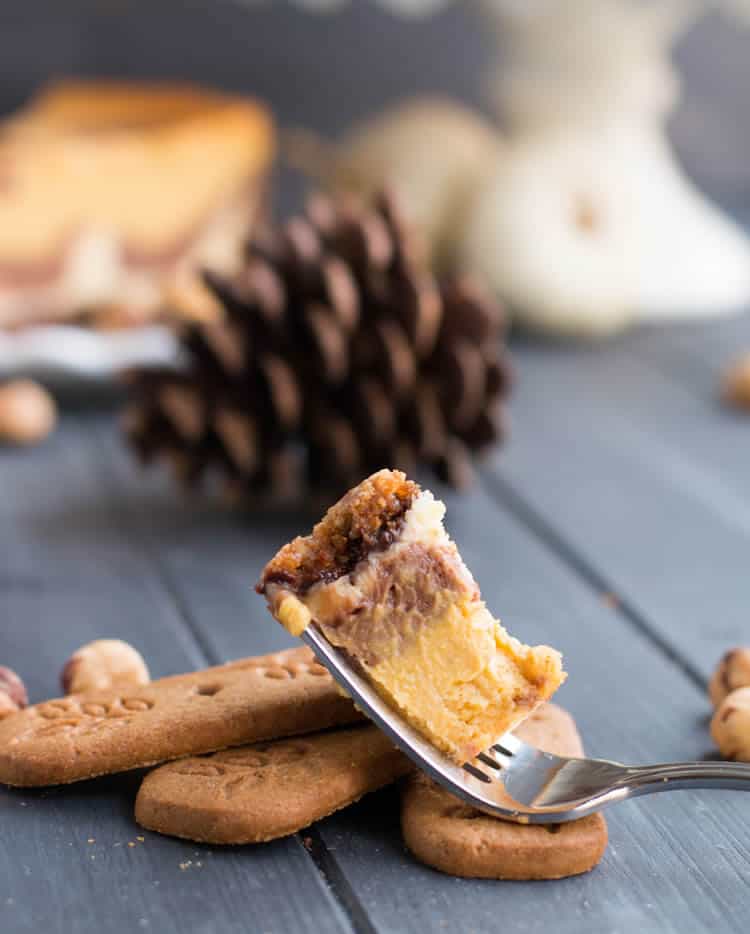 Prepare the cheesecake for baking:

Make the marbled design on top:

* I use the sides and bottom of a metal measuring cup to press an even layer in the pan. It makes for a nice clean looking crust.

*Remember that you need evaporated milk, not sweetened condensed milk for this recipe.

*As you mix the batter, at whatever stage, remember that we're not trying to incorporate a lot of air into the mixture. We simply want the ingredients to be thoroughly mixed. If you over beat the batter, it will create air pockets and the cheesecake will puff up in the oven, only to sink again once cooled.

*After I did the marbled effect on top, I had all kinds of other ideas of how I could have designed it. In retrospect, I would have liked to create various leaves. It really doesn't matter though. Any marbling effect will make it look special.

*This is a great dessert to make in advance. It needs to chill at least overnight and I think it tastes better two days after I make it. So, I make my cheesecakes two days before I need to serve.

What's the diameter of the pan?

Hey Giulia, I used a 9" springform pan. It's right there at the beginning of the instructions in the recipe :)

Gave this a try and got a massive crack down the center... so it's not a fail-safe recipe in that regard... It did taste good, but I should have known my oven would be too rudimentary to have accurate enough temp for the broad oven instructions. It did get eaten, though!

Taylor, cracks are generally caused by over baking or over beating. If you beat too much air into it, it will puff, then shrink, then crack. If, on the other hand, you have an oven that is inaccurate, as you mentioned...I strongly suggest you get an oven thermometer to check the temp. I put it off for so long because I didn't think it was worth my time and I had new ovens. But really, it's an inexpensive purchase and such an easy thing to use. Put it in your oven and you'll see the actual temperature. If it runs too hot or too cold, it's really going to make your baking more challenging, especially with things like cheesecakes and cakes. Once you know what temperature it really is, you can adjust until the thermometer reads the proper temperature. I used to get cracks in my cheesecakes. This baking process really changed everything and now, no more cracks.

Ooh! I love the marbling in this cheesecake!

I know, right? It's pretty and delicious! Thanks, Bethany!