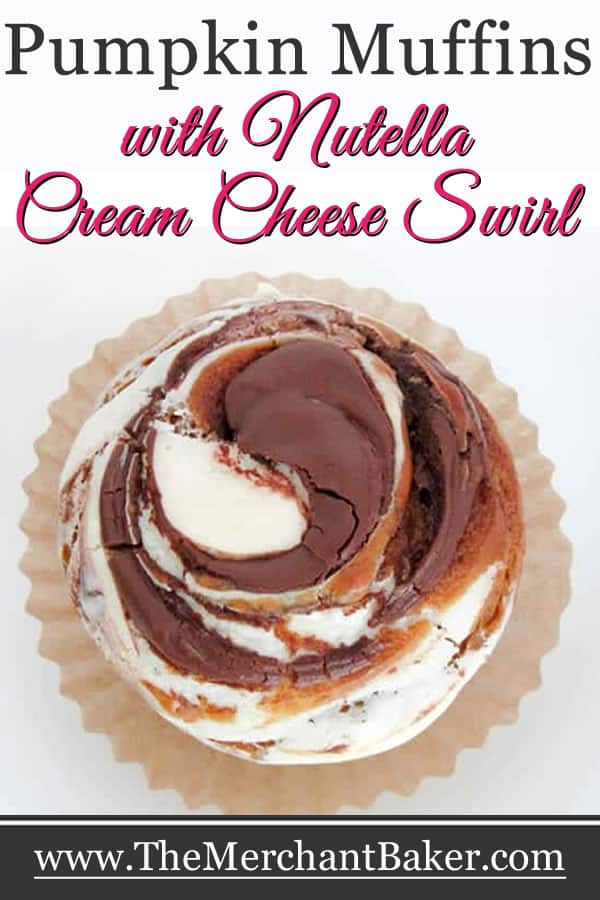 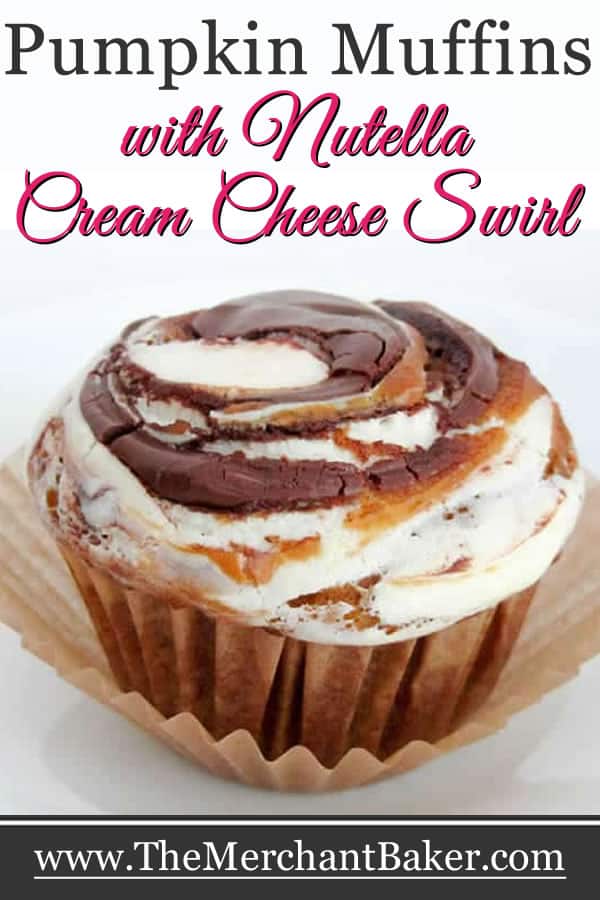 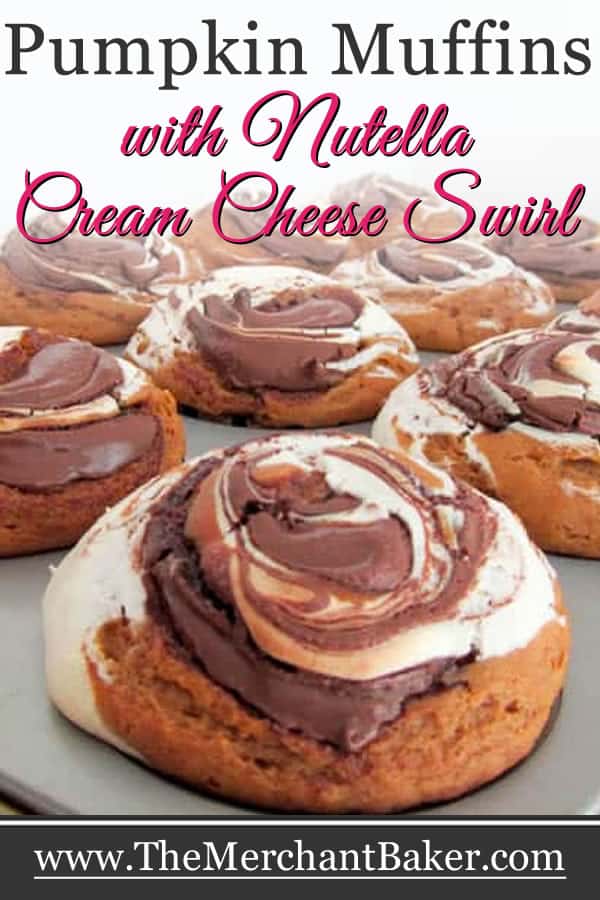 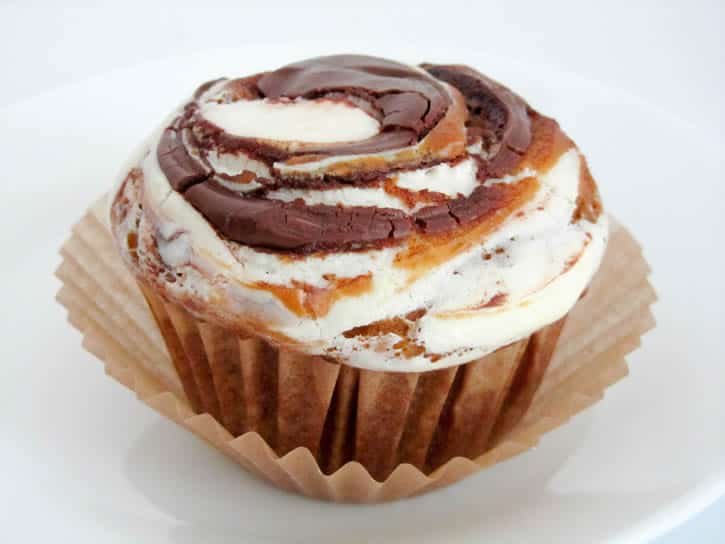 Although, I’m not exactly sure when pumpkin season officially begins, because, in our house, pumpkin has no season.  It’s seasonless.  Fall, winter, spring and summer, we love pumpkin everything! In fact, I buy canned pumpkin by the case. Remember a few years back when there was a pumpkin shortage? Horrors! What? No pie? No pancakes? Whatever will we DO? I only buy organic canned pumpkin which was even harder to find and when I did, it was exorbitantly expensive. Enter cases of organic pumpkin purchased online. And I’ve been buying it that way ever since. So, let’s just say if we need to take refuge in a bunker, I’ll bring the canned pumpkin! 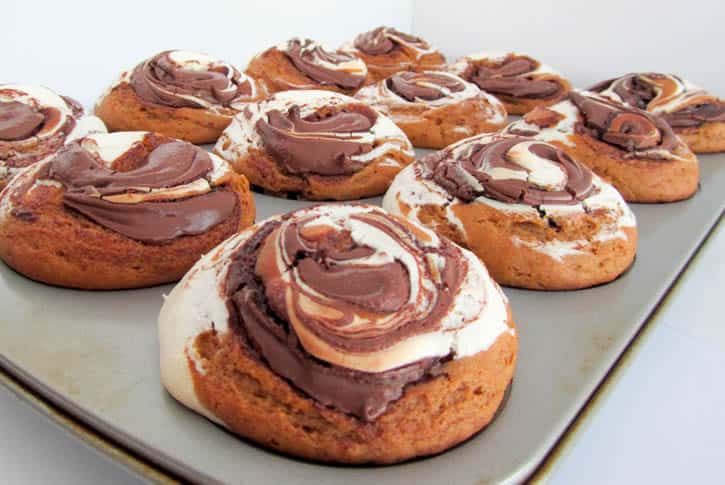 You would think with all this pumpkin madness going on in our house, I might have a “go to” pumpkin muffin recipe ready to just pull out of my arsenal and share. But no. Not so. This one took a few tries before I got it right where I wanted it.  I did get frustrated and gave away a lot of good, but not great, muffins on the path to success. It’s just a muffin after all.   I expected to nail it on the first or second try, but not this time. 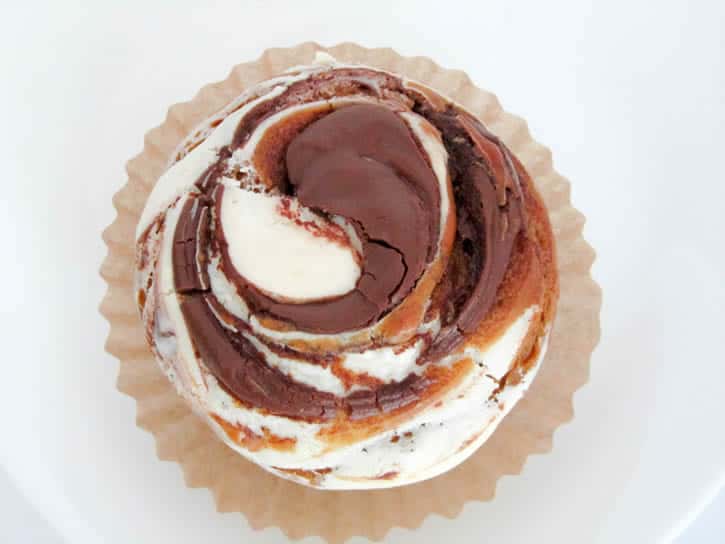 They were all good…but some were too dry and some too spicy. Some had more fat in them than I wanted for this recipe or more sugar than was needed.   Spices had to be balanced and not too strong. After three valiant tries, I thought, “Really? A basic muffin recipe is going to stump me today?” I almost put this one aside for another time, but I was determined to figure it out. 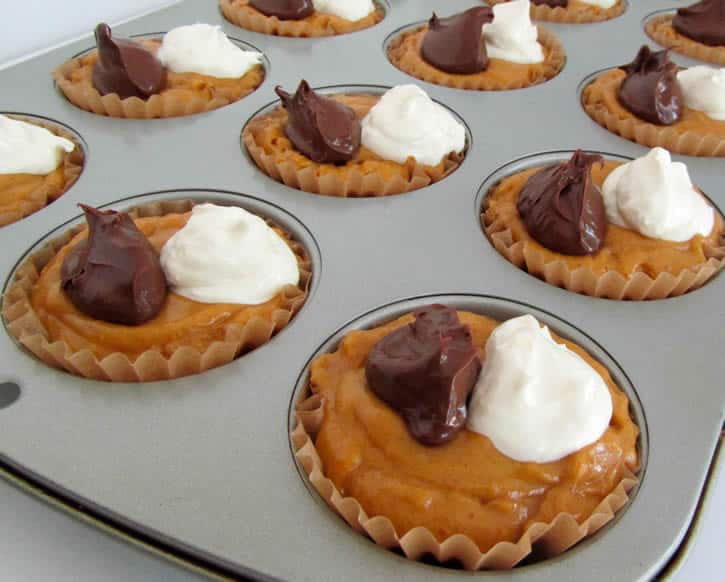 And I just had to figure it out because I had come up with an amazing topping idea that I just had to get out of my system, and I needed something great to go underneath it. And because of the aforementioned topping, the muffin structure  had to hold up to the weight of it and not sink in the middle. 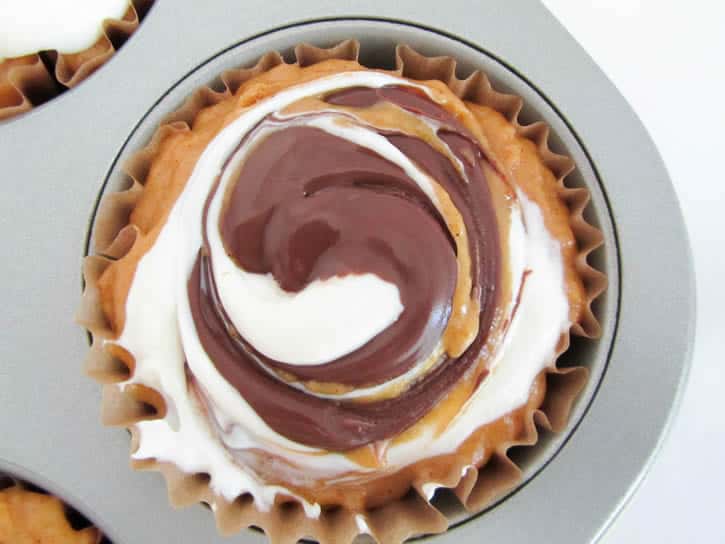 Let me tell you about that topping. It’s perfect. This delicious, moist, nicely spiced pumpkin muffin is topped with a delicate swirl of sweetened cream cheese and Nutella. It’s so simple, but oh so amazing, on top of this muffin. And it’s beautiful too (or maybe even gorgeous!) in a yin yang perfectly balanced kind of way. The topping adds a creamy chocolaty, cheesecakey sweetness to the just sweet enough muffin. 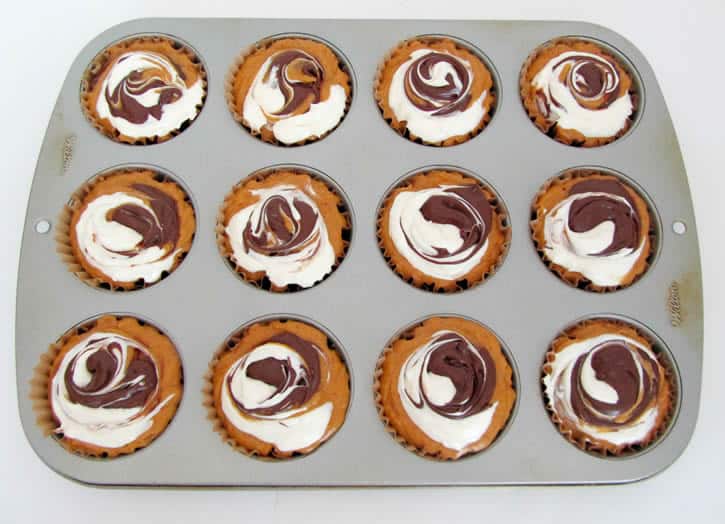 It’s a “baked on” topping. That’s right. Just swirl the toppings on and throw them in the oven. The Nutella and cream cheese become one with the muffin while they bake. The muffins emerge from the oven all dressed up and ready to go. The cream cheese undergoes a bit of transformation in the oven almost getting a toasted marshmallow kind of texture yet with none of the stickiness. 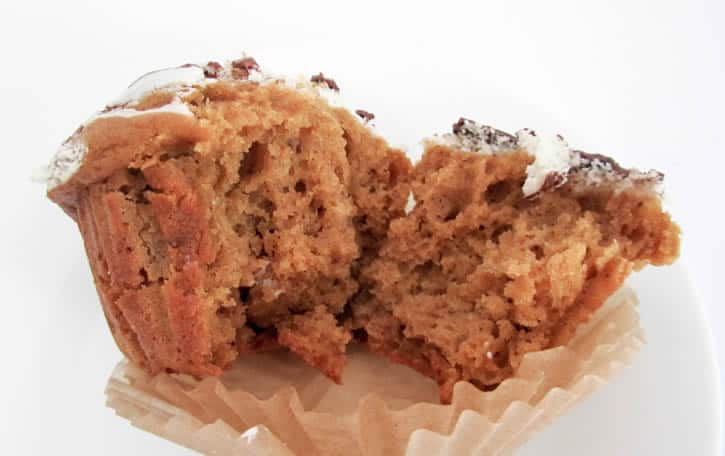 Pumpkin Muffins with Nutella Cream Cheese Swirl. This is a muffin that will tempt you for seconds. Just one more bite. Wait, let’s see, do I like the cream cheese side or the Nutella side? Or, does the part where it’s swirled taste best? Like snowflakes, no two are exactly alike. Hmm. Better try another then. Pumpkin, cream cheese and chocolate. You know you want it.

*Do not overbake. Many good recipes are thrown out for being too dry when they were simply overbaked. It only takes 2-3 minutes to go from perfection to not so great. Check your muffins at the shortest bake time, or even before, if you know your oven runs hot.

*Due to the cream cheese topping, muffins should be stored in the refrigerator in an airtight container. Then, warm the muffins for 10 seconds in the microwave to take off the chill from the refrigerator before eating. Still delicious; in fact, I thought the muffins were even better on day 2.

Recipe from The Merchant Baker Copyright © 2014

Hey Ramona! I want to make these but my Owen has a tree nut allergy so using Nutella is out. What could I sub in? Thanks for your help!! Ps...the pumpkin baked oatmeal is in the oven now as I type ;)

Hey Amanda! If we take out the nutty ingredient, I think you still want to get the chocolate flavor in there since it works so well with the cream cheese and pumpkin. Here are three easy options using mini chocolate chips: 1. Stir them into the batter 2. Sprinkle them on top of the cream cheese swirl 3. Or you could try mixing them into the cream cheese mixture before you swirl it on top. (For amounts, you probably don't need more than 1/2 cup for option 1, just eye it for option 2, and maybe 2 Tablespoons for option three, but really, whatever looks good to you in any of the options should work fine. I do like using the mini chips because they disperse more widely and because they are light enough not to weigh the batter down.) Sounds like you've got a little pumpkin palooza going on in your kitchen today :) Would love to hear what you think about the oatmeal and which option you choose for the muffins.

Jody shared with us..they are very good. I am making them this week-end for the dessert buffet at my moms 81st birthday....

So glad you liked them! It's so nice to hear that Jody shared them with you and it makes my day that you want to share them with others. Happy Birthday to your mom!

They are the best!

Yay! You made them? Aren't they the best?

Made these with my girls who LOVE Nutella --they were amazing! Thanks for the great recipes and the witty commentary!

Jody, Thanks for stopping by to read and try a recipe! So glad you liked them!