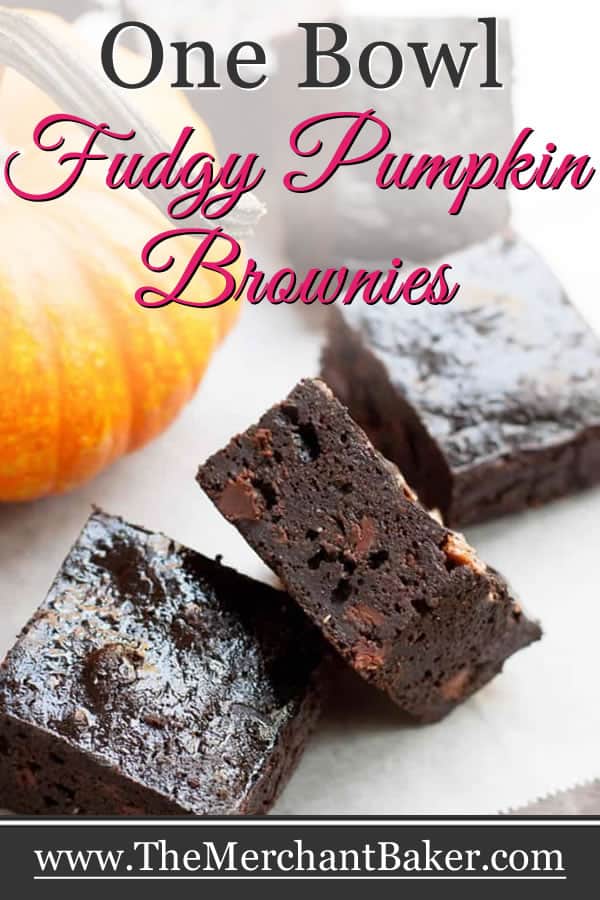 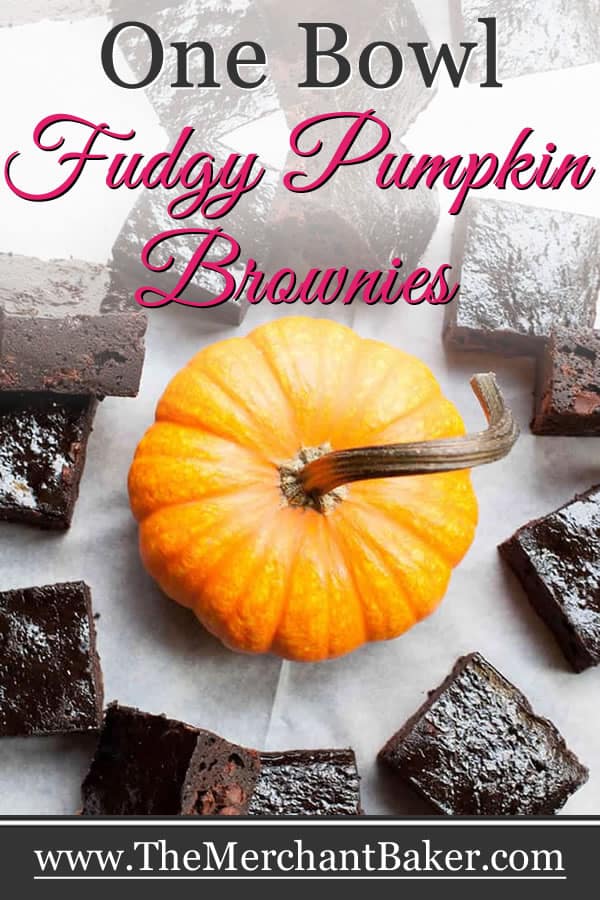 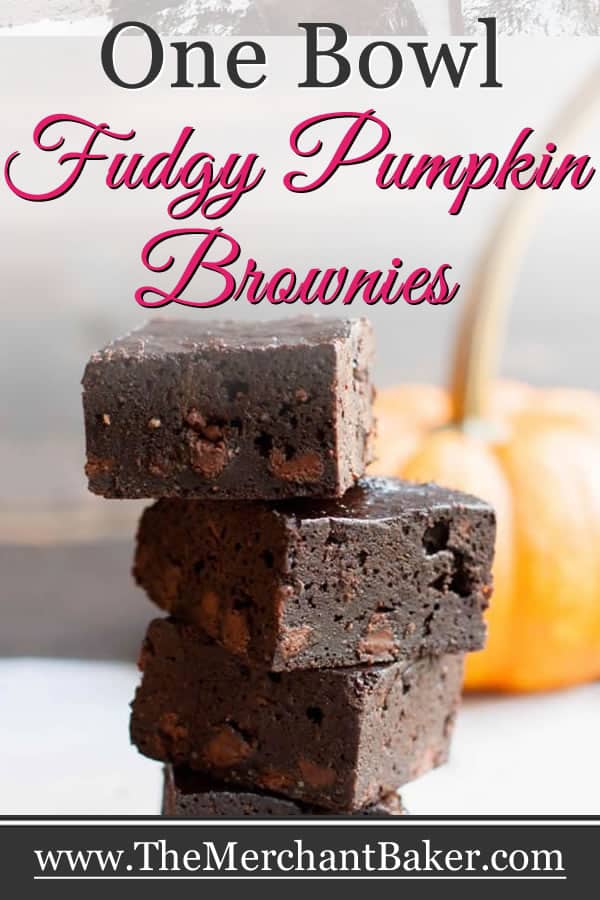 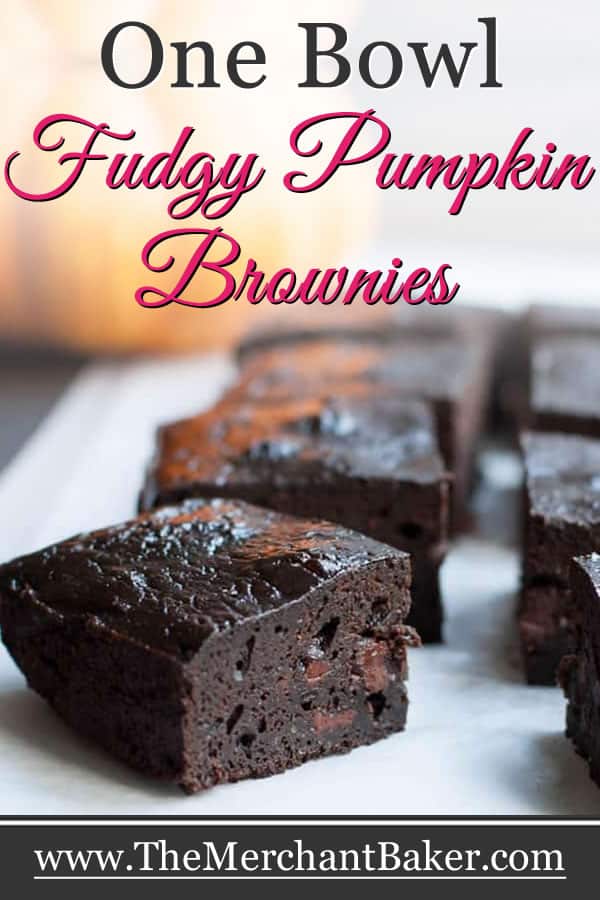 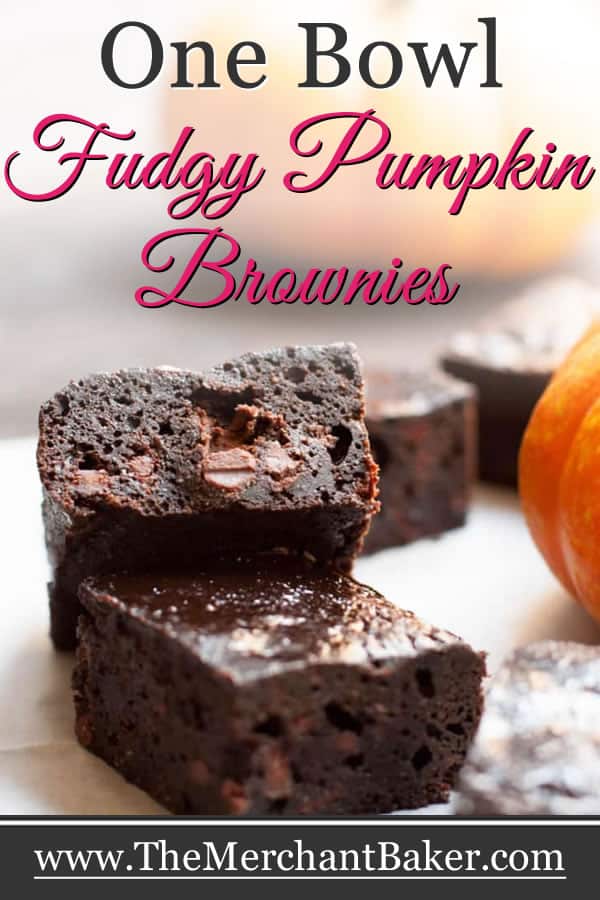 I’ve been working on testing out a cake for you for the past couple of weeks, but until that’s ready, I’ve got One Bowl Fudgy Pumpkin Brownies! 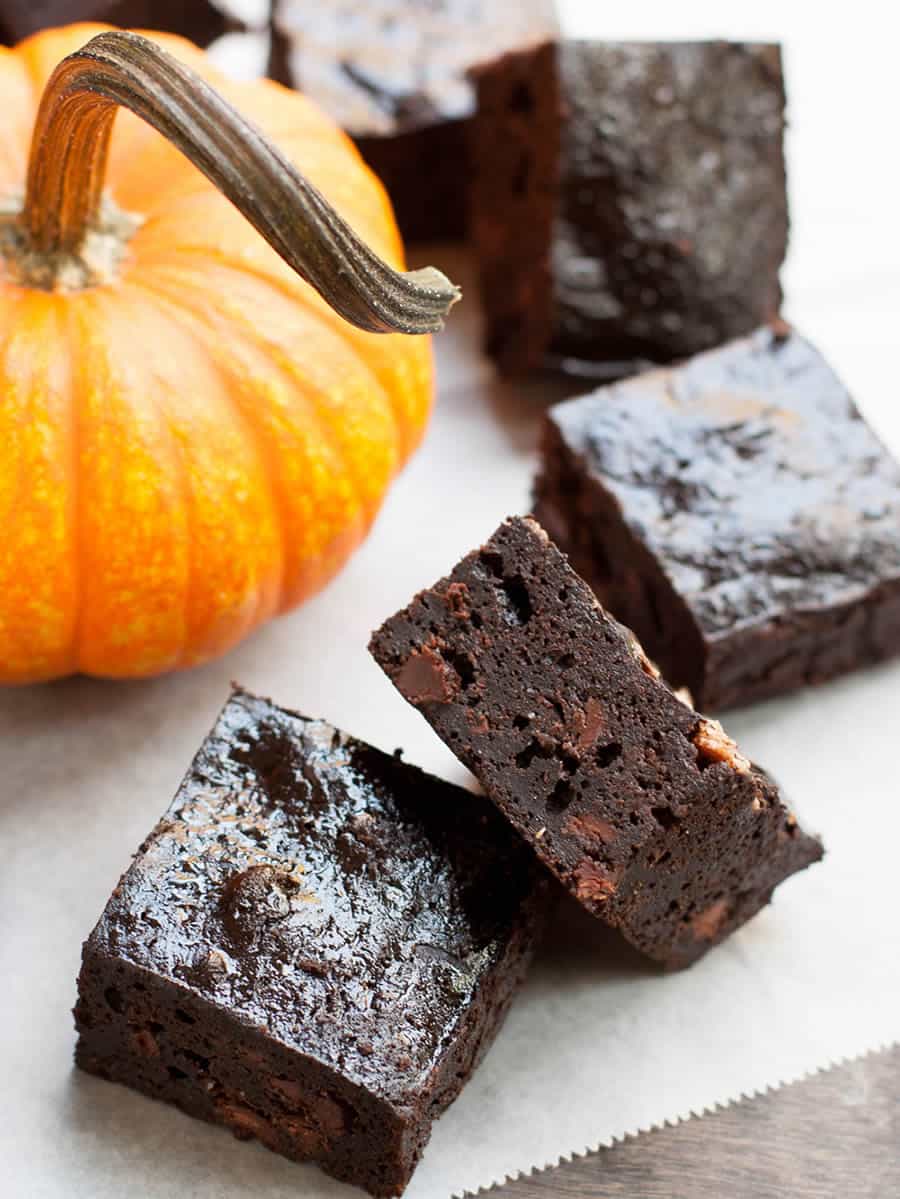 I figured Halloween is just days away, and brownies probably trump cake this week. Hopefully, you’re making some other fun treats like Halloween Brownie Bark or Peanut Butter Cut Out Cookies. But maybe you need something a little less whimsical…something that doesn’t have eyes or a face :)

As a blogger, I have tried to accept that I don’t have time to make old favorites as often as I used to. I’ve read about bloggers who say they rarely made anything twice. Wait! What? What about chocolate chip cookies? What about blondies? 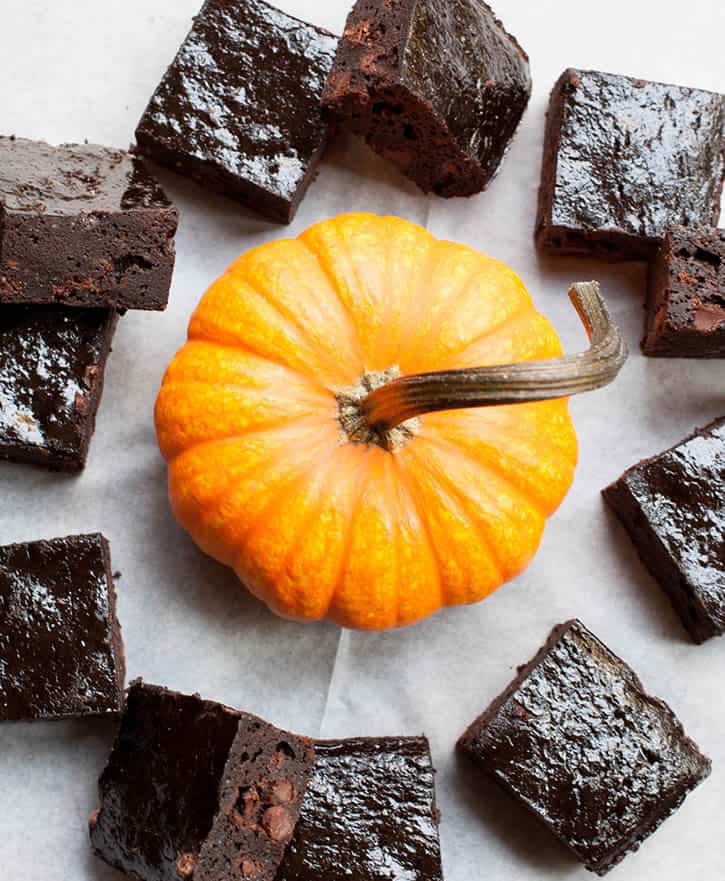 It’s true. Now that I’m knee deep in blogging, we don’t see our traditional favorites as often as we used to. Thankfully, there are certain things that my family likes to make without any intervention from me. That’s where these One Bowl Fudgy Pumpkin Brownies come in. They are a version of Fudgy Zucchini Brownies, which, we must talk about for a minute.

The Fudgy Zucchini Brownies were a big hit with my family this summer. They were a different kind of brownie for us and they were so easy to make! Just throw everything into the food processor and bake. So I made them once for us. We liked them so much, I made them one more time for the blog. And then, I posted it, and filed it away so I could move on to other things. 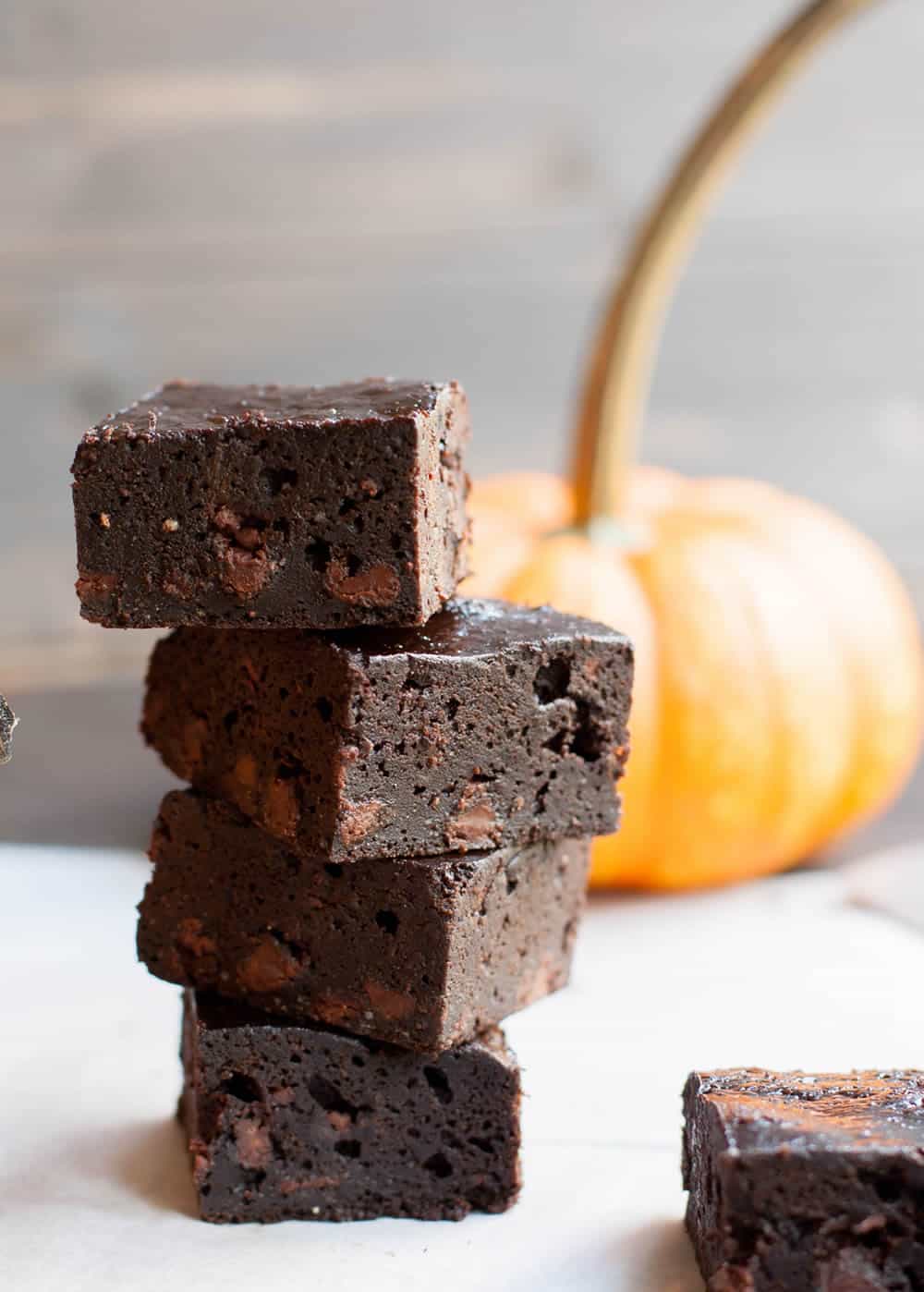 But my family wasn’t ready to move on. We were deluged with zucchini at the end of the summer, so my husband and kids took over the kitchen and made two double batches of the brownies. Weeks later, they made more batches! I’m pretty sure it’s the sweet treat that’s been made in our house more times than any other recipe this year. Cah-ray-zy! And, it’s not like we were overdosing on brownies. They freeze so well, and everyone likes them cold, so we just wrapped them all up and froze them. They were ready in a pinch for a quick treat, or if someone stopped by, or if I needed to take something somewhere. 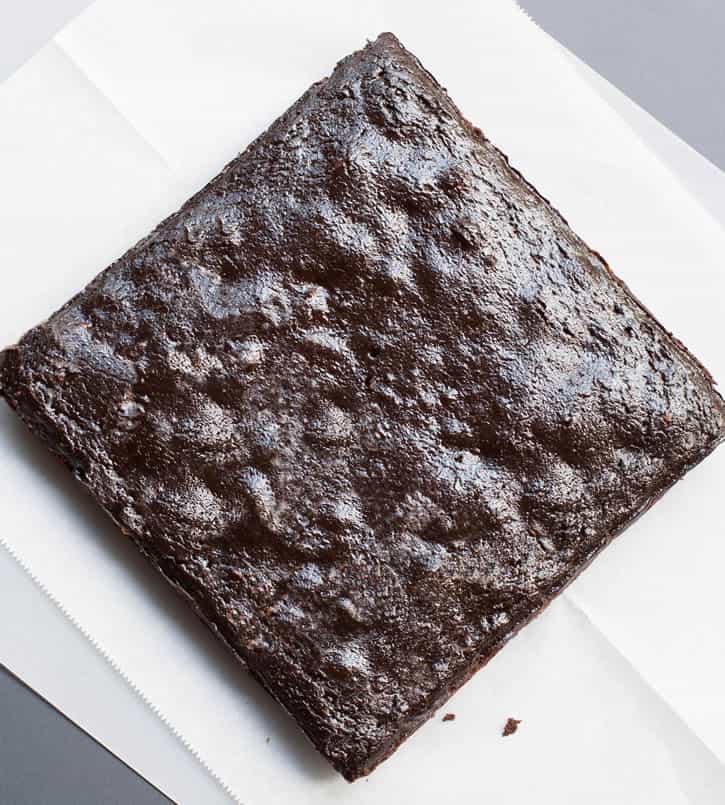 I started thinking…now that zucchini season is over, what if I used pumpkin puree instead? It wouldn’t require a food processor. I could make it one bowl. I’d add some pumpkin spice. I’d move to mini chips since I wouldn’t have the processor to chop up the larger pieces. (I forgot to do that for this batch, so you’ll see bigger chocolate chunks in these photos.)

I decided to test the idea. I baked up a pan and then my husband and I headed out to back to school night and left our baby sitter and our kids to sample the brownies once they had cooled. I made them promise to note their feedback on the new version, so they could tell me all about it when we got home. What did they think of the texture? Was there enough pumpkin spice? Was it okay that I left in the espresso powder? 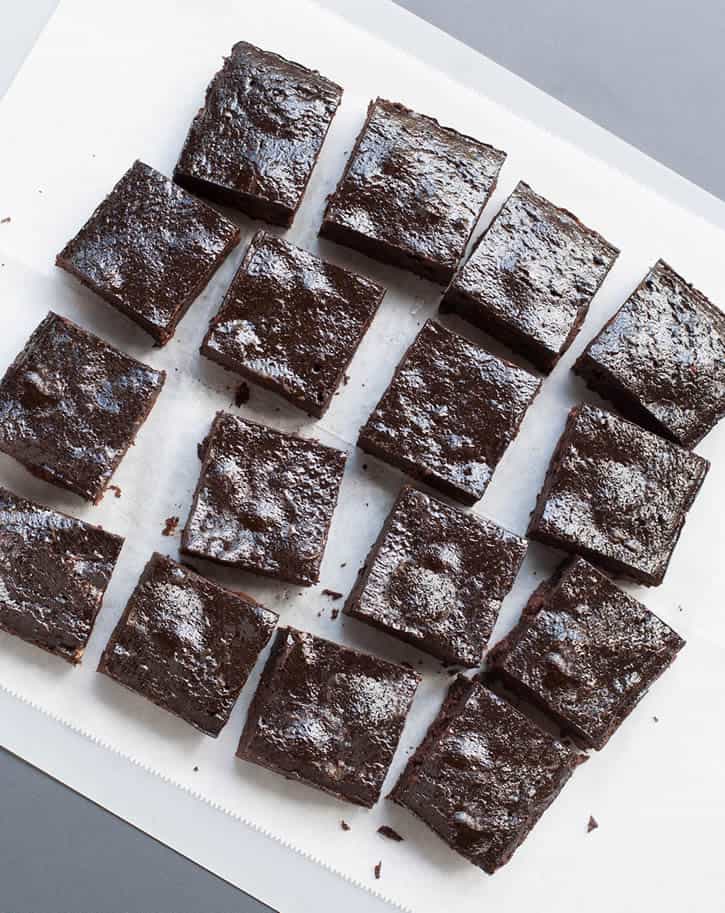 I came home to rave reviews. Adult and child alike loved everything about them. “Don’t change a thing,” they said. Well, I love hearing that. Recipe testing can be a little tedious and we often tire of sampling the same flavor over and over before I’ve achieved the goal. It’s like those darn pumpkin scones that I know many of you are waiting for. I’ve made batches and batches. We liked them all, but I haven’t hit on the “one.” And then I had to set them aside, because no one wanted another bite of one, myself included.

Anyway, once homework was checked and kids were in bed, it was time for my husband and I to kick back for a minute. Coffee and tea were prepared…brownies plated. Time to taste this new pumpkin-y version for ourselves. I’ll be honest. I really, really liked them, but my husband? He was insane about them. He surprised me with his raw enthusiasm. I kept asking him, “What do you love so much about them? Do you like them better than the zucchini version? Is it because you’re eating them with coffee and it’s like a pumpkin spice latte?” (Okay, I was reaching with that last one…I think) He said he expected to bite into a brownie and just taste chocolate but he tasted pumpkin and chocolate. He said it was like biting into pumpkin pie, and yet, it was a brownie. 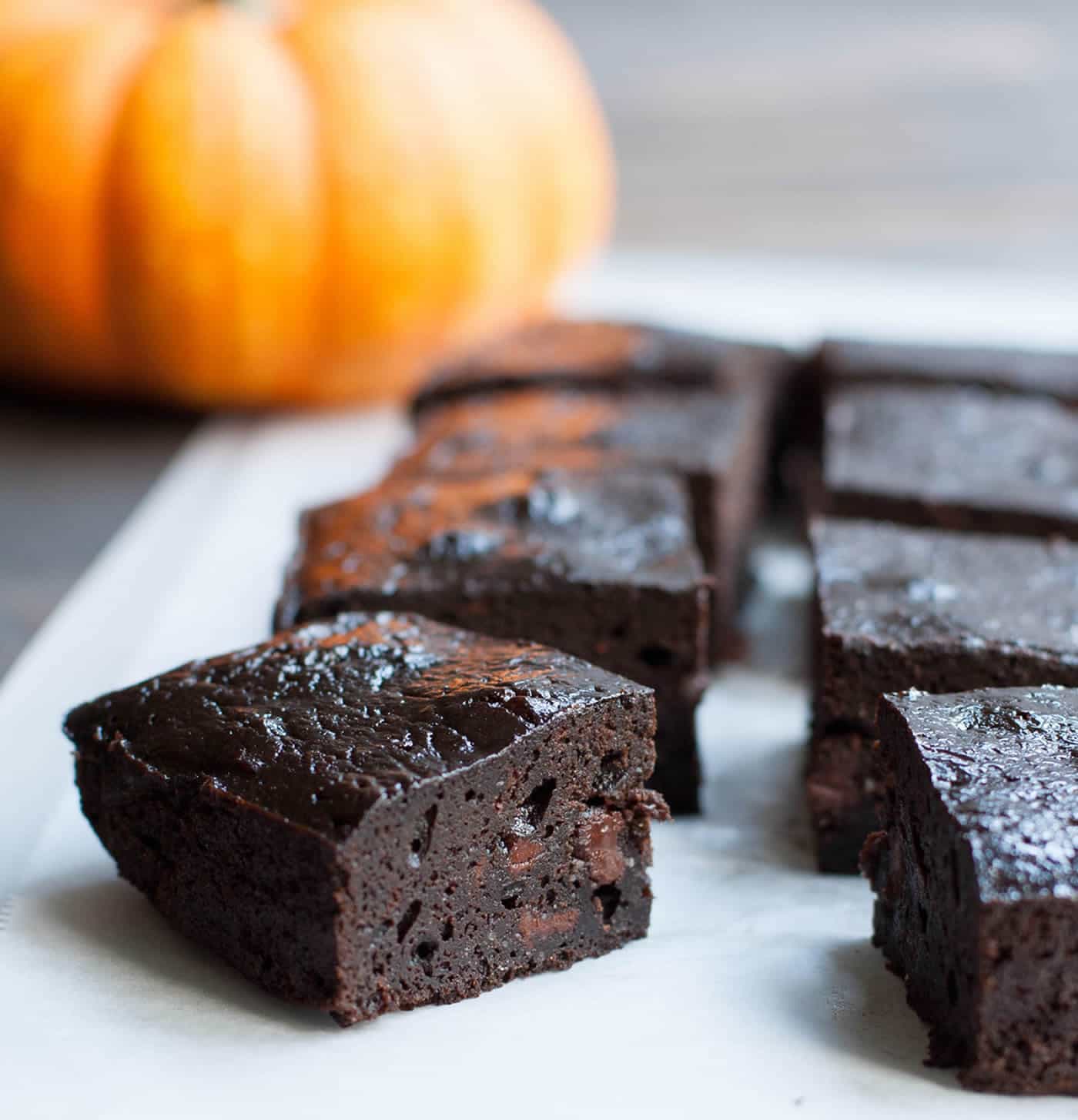 He went on and on. Really. I was a little shocked. All this over a slightly healthier version of a brownie? And he’s a sugar fiend and these aren’t overly sweet. Like the original, they’re kind of reminiscent of a flourless chocolate cake, but they do have a bit of flour in them. I kind of think they are like no other pumpkin treat I’ve tried. They’re glossy. They are moist and fudgy and yet not underbaked.

I had to make them again. This time for the blog. I hadn’t planned to post another version of the Fudgy Zucchini Brownies, at least not so soon after the original, but everyone who has tried them has loved them; I didn’t want to deprive you of the knowledge :) So here they are…One Bowl Fudgy Pumpkin Brownies. Perfect for the season, nothing whimsical, no googly eyes…no cute little pumpkin faces…just straight up easy and delicious! 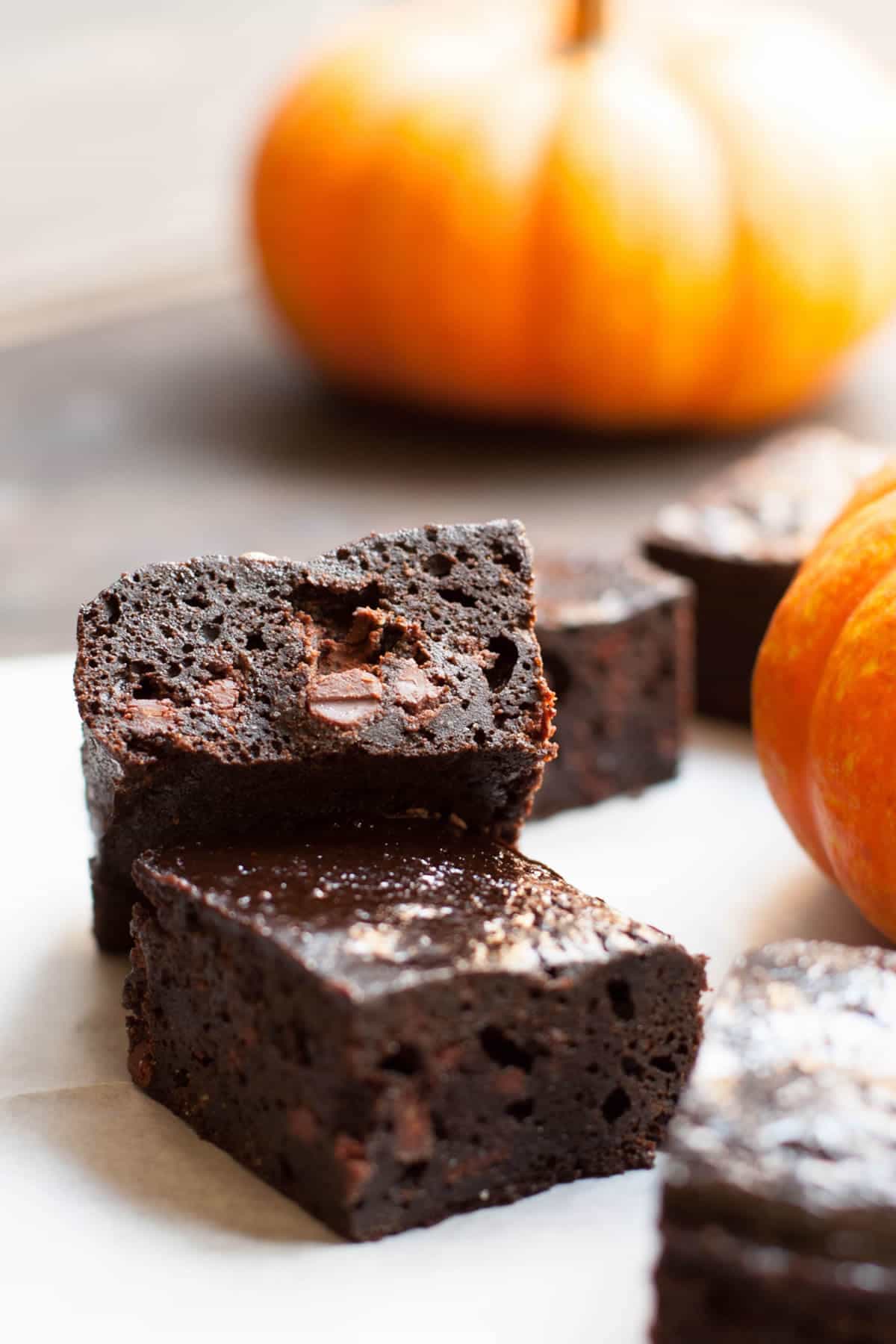 But… feel free to add googly eyes and faces as desired :)

Different brands of pumpkin have different levels of moisture. I used Trader Joe's organic canned pumpkin which is closer to a baby food texture than a super thick pumpkin. If your canned pumpkin is super thick, you can use water to thin it out. Just remember to thin out the pumpkin before you measure it.
Servings 16 brownies

*You can also use a 9" pan. You will get thinner brownies. I used that size for the Fudgy Zucchini Brownies. Check for doneness closer to 25 minutes as the larger pan size will bake the brownies faster.

*You can double the recipe and bake in a 13 x 9" pan. Your brownies will be about as thick as in the 8" pan. I don't have a baking time to quote, it could take 35-45 minutes. I would check at 35 with a toothpick and add time as necessary.

*I've said it many times but different cocoas will produce different flavors. One of my favorite cocoas to use is Double Dutch Dark Cocoa. I used that for the pumpkin version. For the zucchini version, I used Bensdorp Cocoa. Love 'em both. You can use regular unsweetened cocoa, but I love the flavor that Dutch process cocoa provides.

*You don't have to store these in the refrigerator, but we really liked them cold.

*For the best cuts, cut cold brownies with a hot knife. I just let my knife sit in a tall mug of hot water for a minute or two, then wiped it dry and cut. I reheated it in the water every couple of cuts, wiping the blade with a paper towel after each dip in the water.

Really easy. So moist and chocolaty with a great pumpkin flavor! These are a keeper. I used regular size 60% Ghirardelli chips which made for some nice melted pockets of chocolate.

Well, you can never go wrong with nice pockets of melted chocolate can you? Also, definitely try the zucchini version when they're back in season. It's another keeper :)

Hi Ramona, these were fudgy and delicious. I rarely nail a recipe the first time, so I know I'm on to something great when a new recipe works out the very first time I try it. The only change I made was to reduce the sugar to half a cup, and the sweetness was just perfect for me. I thought the chocolate chips may be too much in the recipe, but followed through anyway. When I tasted the brownies, I realised my fears were unfounded. They were perfect! I like the 1/2 tsp espresso too (I used instant coffee granules instead), the coffee flavor really shone through. A robust recipe, thanks for sharing this.

Kinny, thanks for sharing your success! I often like to reduce the sugar in a recipe. Good to know your reduction worked out well. I'll definitely have to try it!

Hi Ramona, I couldn't resist making these today (especially because it snowed much of the day here in the Hudson Valley). You had me with your "one bowl" title, and it was as easy to make these as I had hoped. They came out great, and I love that the pumpkin flavor actually comes through in the finished product. This first batch will be gone quickly, so I'm already gearing up to make more. Thanks (I think...)

Hi Chris, knowing that you're not one to do much cooking or baking, I'm honored that you decided to try this recipe and even happier that you enjoyed them enough to make them again :)

Well you've got my interest now....I'm a new convert to the pumpkin-chocolate combo and love it. We got hooked on your Fudgy Zucchini Brownies this summer so I can't wait to try these.

I'm hoping to as soon as my husband announces I can bake again since he's trying to lose weight-I doubt brownies would help him accomplish that, darn it!

I'm definitely pinning these for another day. Thanks! :)

Hi Carol, I think you'll love these as much as the zucchini version. I know better than anyone how hard it is to have sweets around when you're trying to avoid a splurge. However, I do feel better about this splurge than some other more decadent choices I've posted. They are a bit healthier and lower in sugar and calories than a regular brownie...and just one piece really satisfies a craving for a sweet. Wait! You should try Brownie Bark! It's only about 113 calories a piece! But...it's kind of addictive. Once piece is never enough...Okay, never mind. Your husband would not be happy with me about those, lol!