About 18 months ago, I launched a new series called, “Flashback Friday.” Here’s the introduction I wrote to that first post…

“Welcome to Flashback Friday, a new series on The Merchant Baker. Here, I hope to share some of our creative endeavors… projects that we worked on well before the blog.  Most of the pictures in these posts will likely be home photos that were never taken with the thought that they’d be published, so I’ll need a little leeway on judging picture quality.  (Although some are much better quality than my early recipe posts, so there’s that ;)” 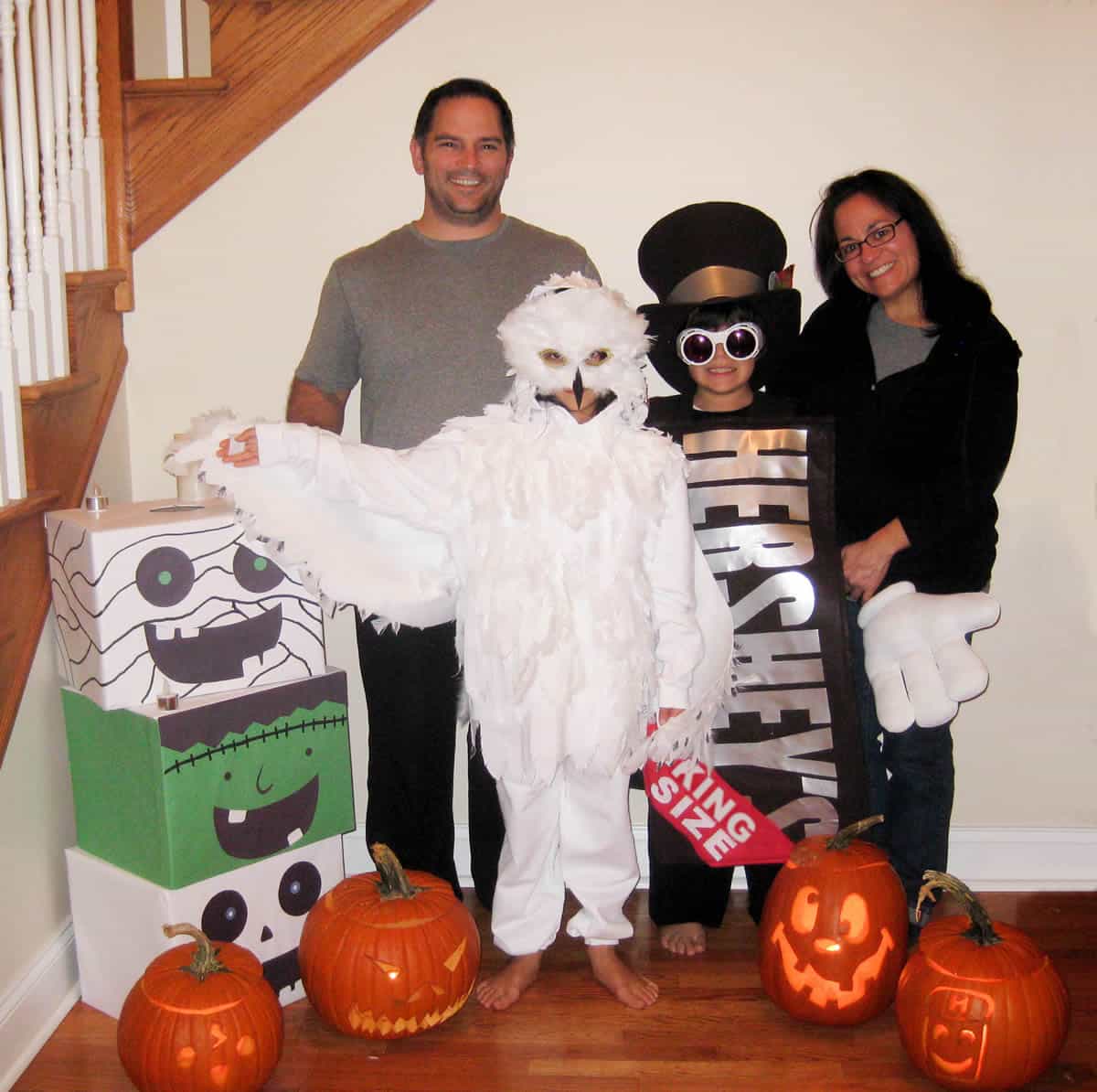 I was pretty good about keeping up with the series. I posted…

And then a year passed. I had never intended it to be a weekly series, but I also didn’t intend to allow a year to pass before I posted again, but here we are. Pretend it’s like a Netflix series and we’ll be good ;) 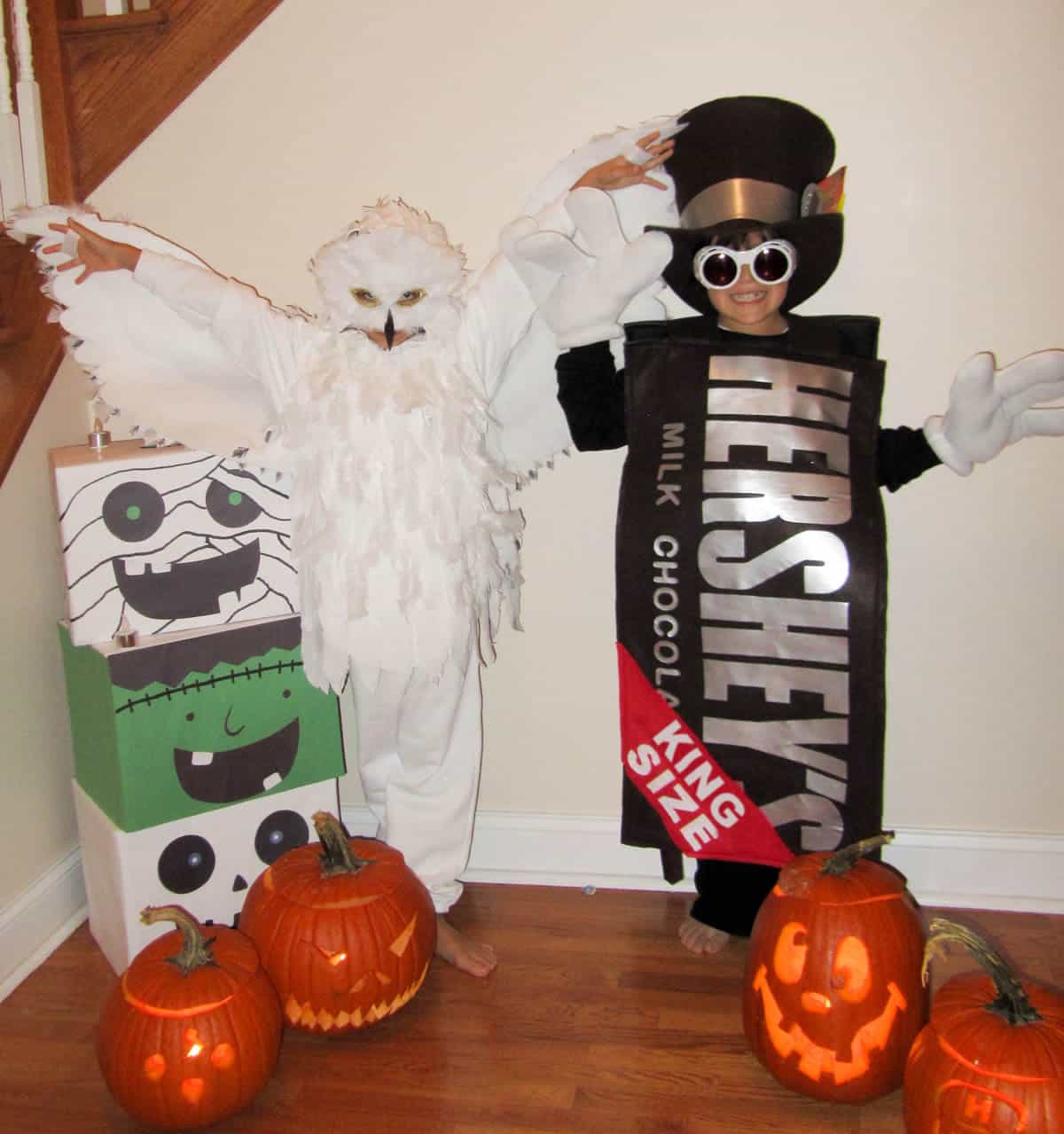 Today I’m sharing some Halloween creations from a few years ago via this new Flashback Friday: A Hershey Hedwig Halloween. My son was obsessed with Hershey’s Chocolate World at the time and wanted to be the Hershey character. He was also obsessed with Willy Wonka and The Chocolate Factory. (Do you see the pattern here?) My daughter was still in a passionate owl phase and decided she wanted to be Hedwig, Harry Potter’s owl.

My kids almost never pick costumes that we can buy. Even the year my son wanted to be a green dragon…pretty easy right? Wrong. That year there were no green dragon costumes in sizes bigger than toddler. We like the creative process and even though it can really be time consuming, I can look back at all of the costumes we’ve made, how thrilled our kids were to have their vision come to life, and I’ll always believe it was worth it. 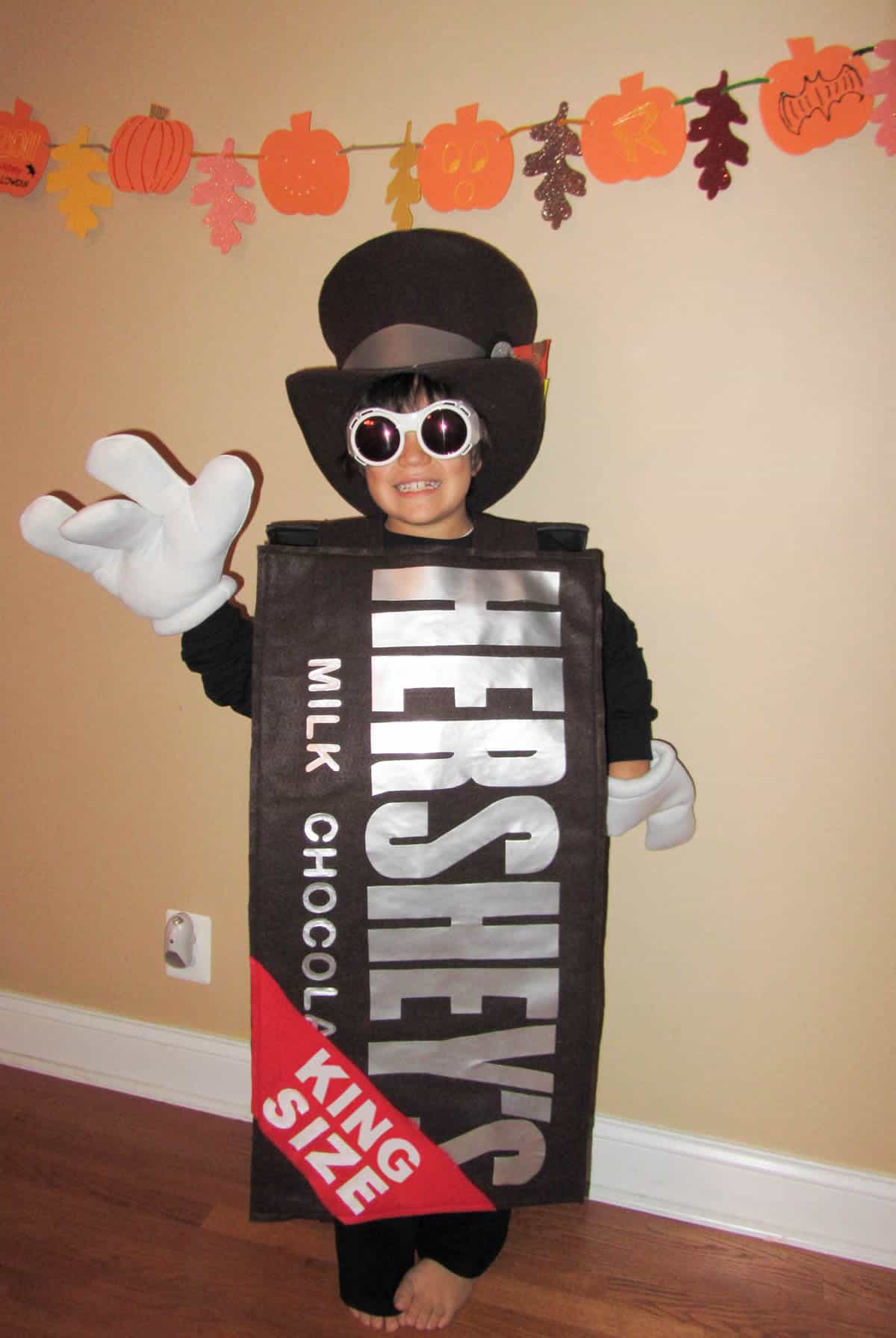 I knew we weren’t going to try to make the actual Hershey character, so we improvised and decided on making a Hershey chocolate bar/Willy Wonka mash up. I made it in sandwich board fashion. Shoulder straps connected the front of the chocolate bar to the back. I used brown felt and sewed it to light weight upholstery padding. I sewed a loop on the inside of the front and back and threaded a grosgrain ribbon through it to act as a hidden belt to keep the costume from flying away from his body.

My husband cut the letters out of silver fabric and spray glued them onto the “bar.” Then, he used red and white felt for the “size” part. For these photos, I edited out his name, but where you see “King Size?” It actually was his name- size. I thought it was hysterical because, the chocolate bar was really the size of him, not the king sized bar. My son wasn’t really happy with that change, but he got over it :) 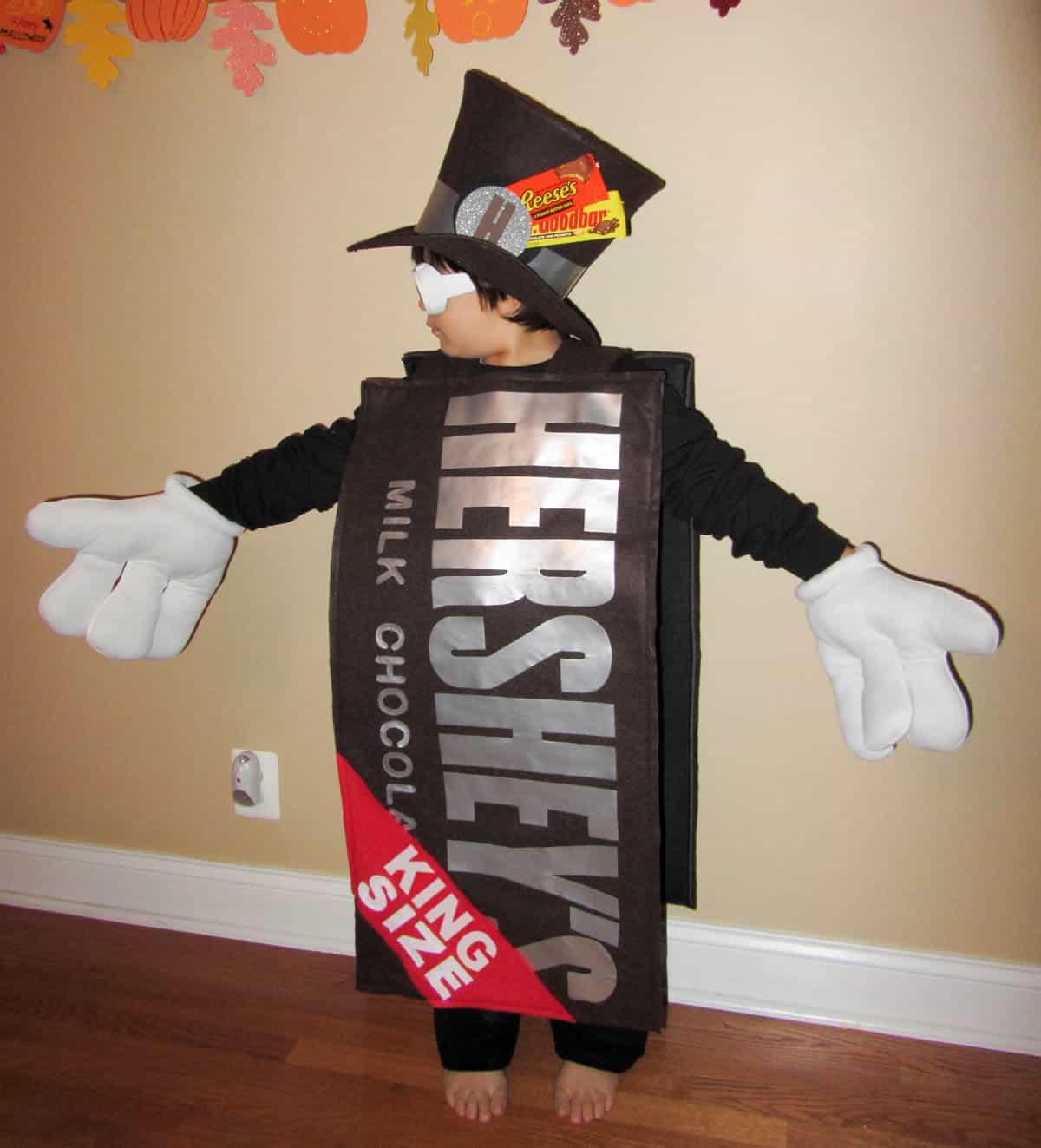 The hat was made by my husband. (Now there’s seven words I’d never thought I’d say.) He found a tutorial on line and went to work. I was A-MAZED at the result! I loved the “H” for Hershey, the silver fabric from the costume letters for the trim, and the idea he had to use candy wrappers to decorate it. I loved it so much that I wanted to start making aaaallll kinds of hats! (Update, no other hats have been made ;) 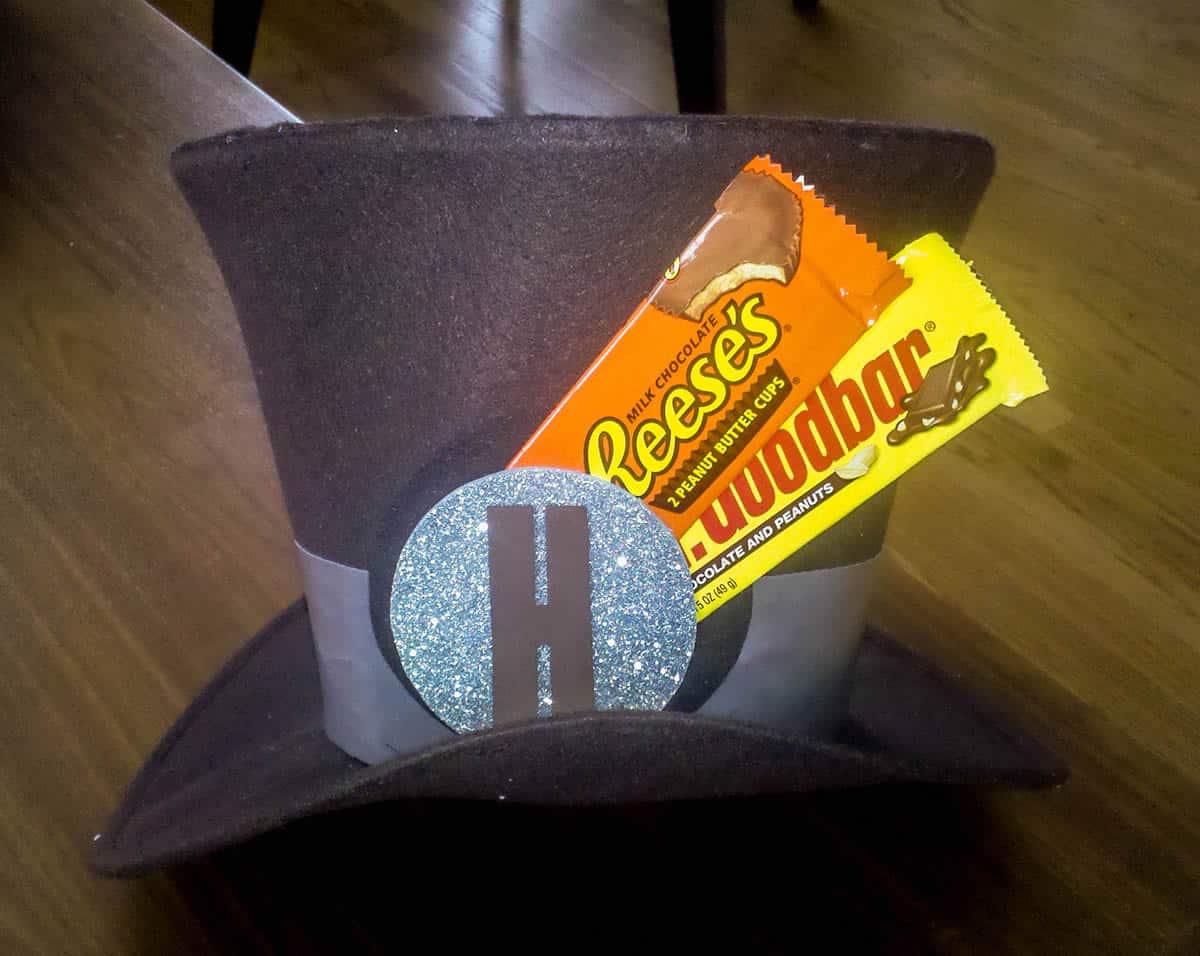 The puffy white hands were a no-brainer since that was actually part of his character’s costume. We picked those up at the costume store. Done and done. Then, we found Willy Wonka glasses, you know, the ones from the Mike Teavee part where he gets shrunk? I’m a die hard fan of the original movie, but using the glasses from the new movie worked perfectly. That was it! The costume was done. It was inspired by all things chocolate and the mash up was a beautiful thing. He loved it! 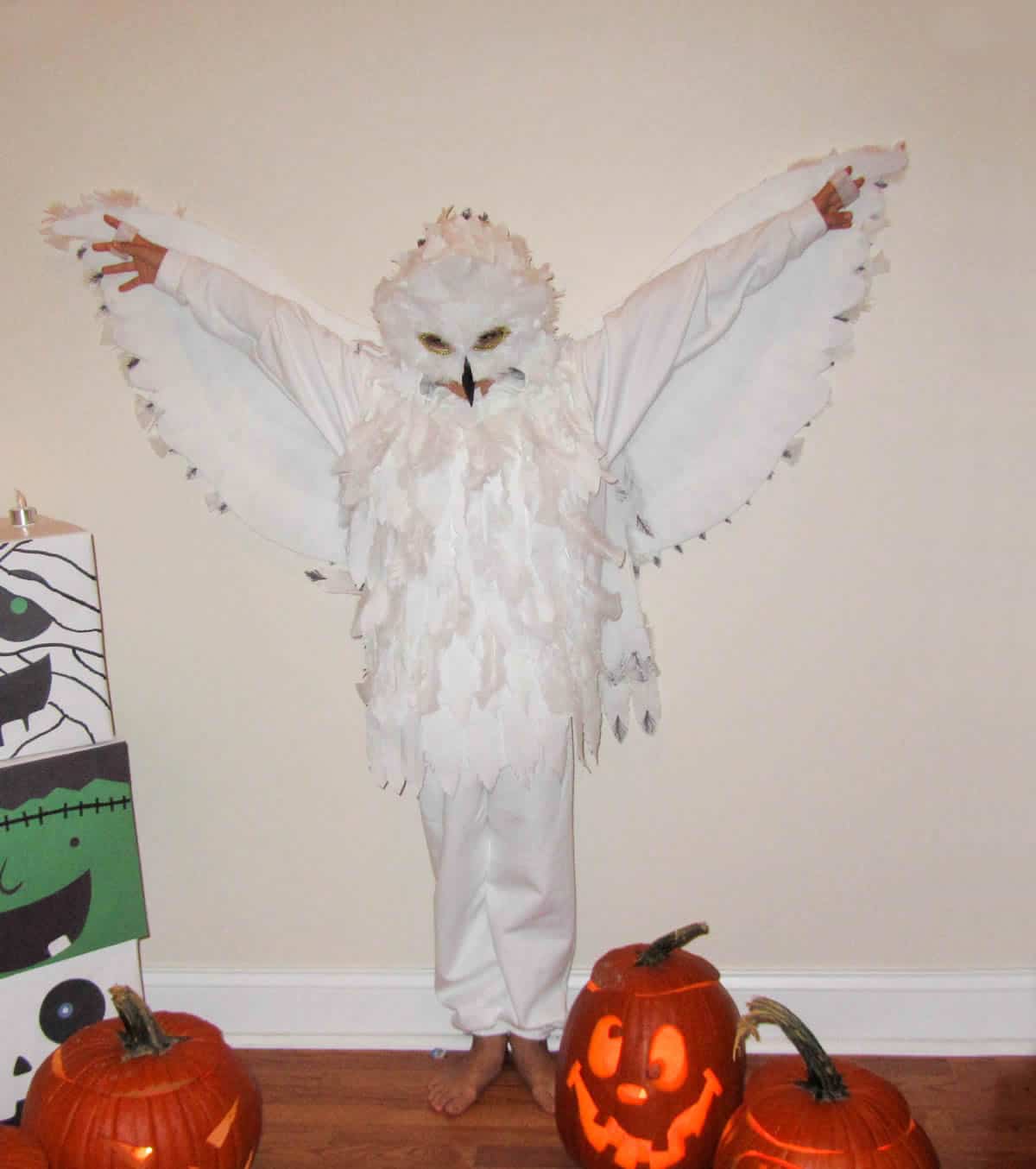 While my husband was busy creating the perfect fonts for my son’s costume and practicing to become a milliner ;) I was working on how to create a snowy owl for my daughter. I started with a white hoodie and sweat pants. I used white muslin to create the body, basically using the sandwich board idea again. Then I used a stiff interfacing for the wings and attached them to the body with buttons so that they could move freely up and down. I cut rows of fringy muslin “feathers” and sewed them to the body, the hood and the wings and then hot glued real feathers in between. The effect was perfect. It looked like the whole costume was covered in real feathers! A little finger loop was sewn onto the ends of the wings so that she had a place to grab them. I used a light grey marker to create the feeling of feathers on the inside of the wings. The photos here don’t pick it up, but I thought it was a nice touch. 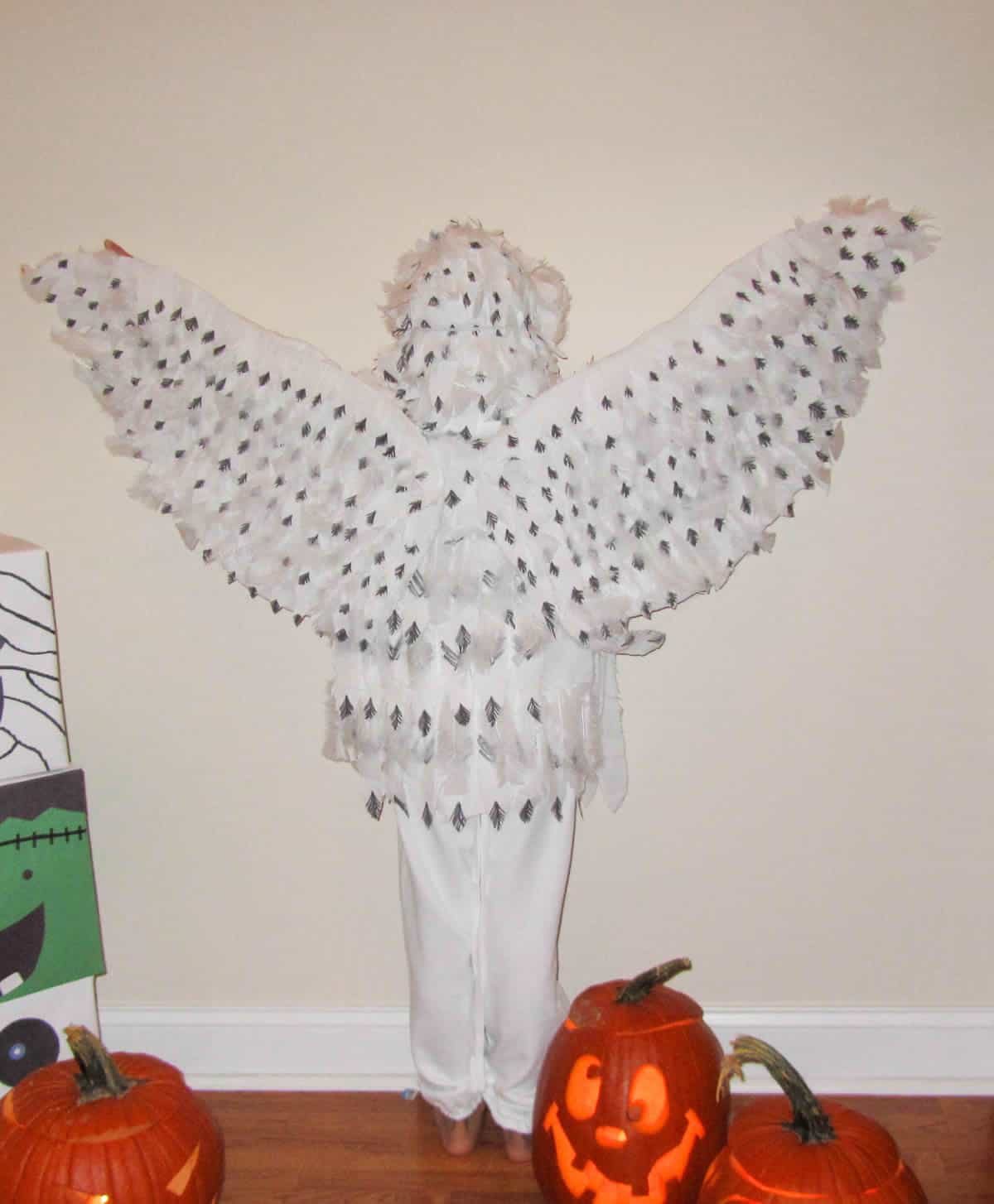 The costume was a bit tedious, that’s for sure. But I was so pleased with the fluffy white results. It really exceeded my expectations! That was until my daughter asked, “But Mom, where are the black spots? Hedwig is supposed to have black spots.” What?!? Ugh! My beautiful fluffy white owl needed black spots?!? Now, I might have executed this differently had I realized I needed black spots from the beginning, but now that I was “finished” I had to improvise. I went with a black sharpie and tipped the feathers. Yep, I might have done black feathers or something, but I was running out of time so I went with the marker and just dealt with it. They look much better in person than in the photos. She thought it was perfect. I, on the other hand, continued to pine away for the perfectly fluffy snow white unspotted owl I had created. 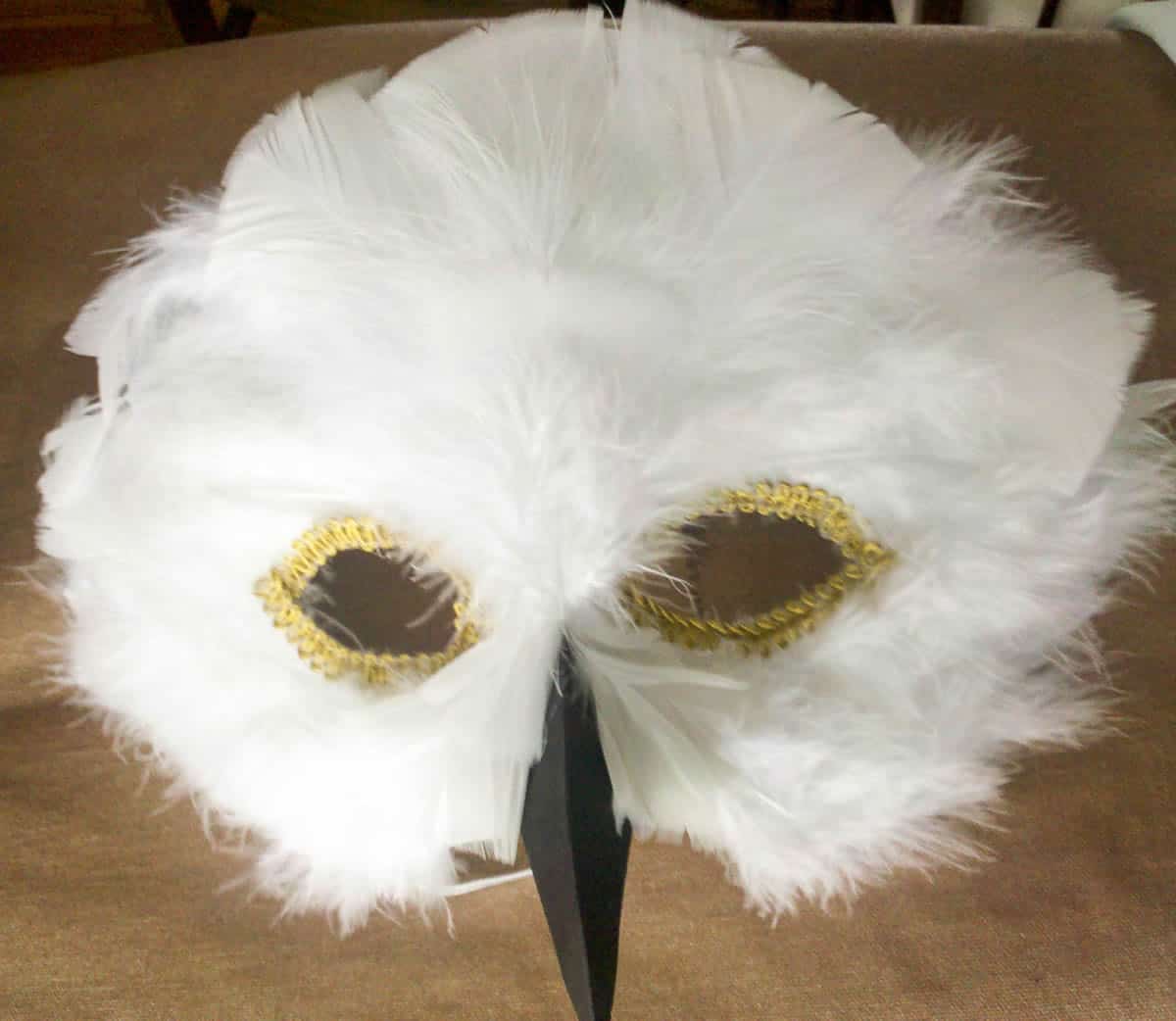 Then it was time for the mask. I was lamenting making the mask. I thought it would be hard. I wasn’t sure how I was going to do it, so I just bought a plain mask at the craft store and dove in. I arranged the feathers in bird face fashion, or at least what I thought bird face fashion was, and hot glued them onto the mask. I engaged my husband to create a beak for me. He made it out of black cardstock. I glued a little trim around the eyes and that was it! It was almost too easy! Now this was my favorite part of the costume. It almost made up for the black spots. And just like the hat that my husband made, now I wanted to make aaaaalll the feather masks! (Update…yeah, you guessed it… no more feather masks have been made ;) 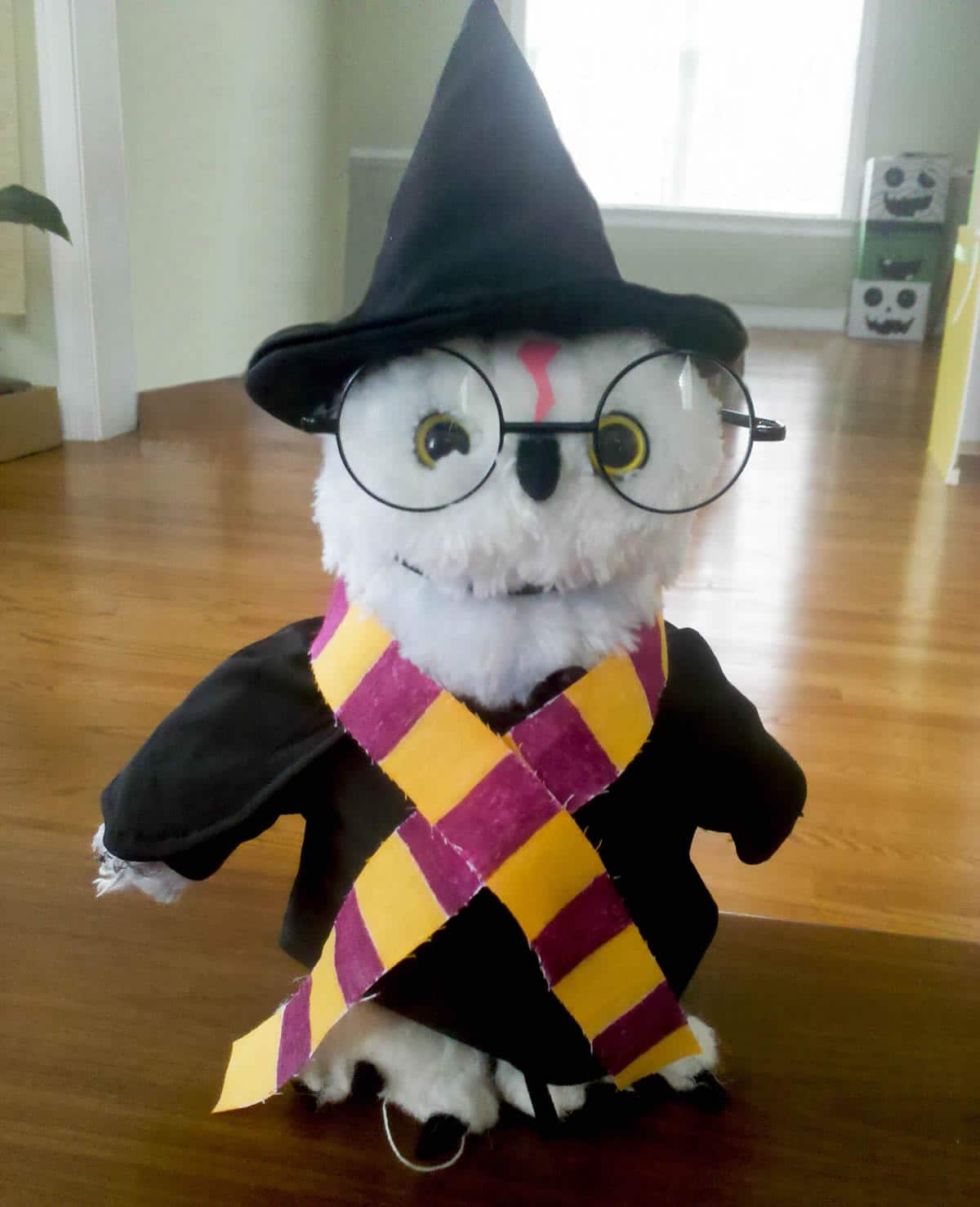 While I was busy in feather heaven, my daughter was busy making a costume for her stuffed snowy owl, Hedwig. She decided that Hedwig was going to dress up as Harry Potter! LOL! Where does she come up with this stuff? She worked from scraps laying around and put that cute little outfit together. (Apparently she thought my sharpie idea was a nice shortcut, so that’s what she used for the scarf :) I remember her walking in the parade at school dressed as Hedwig, but carrying Hedwig dressed up as Harry Potter. Seriously, it still makes me laugh to think about it! 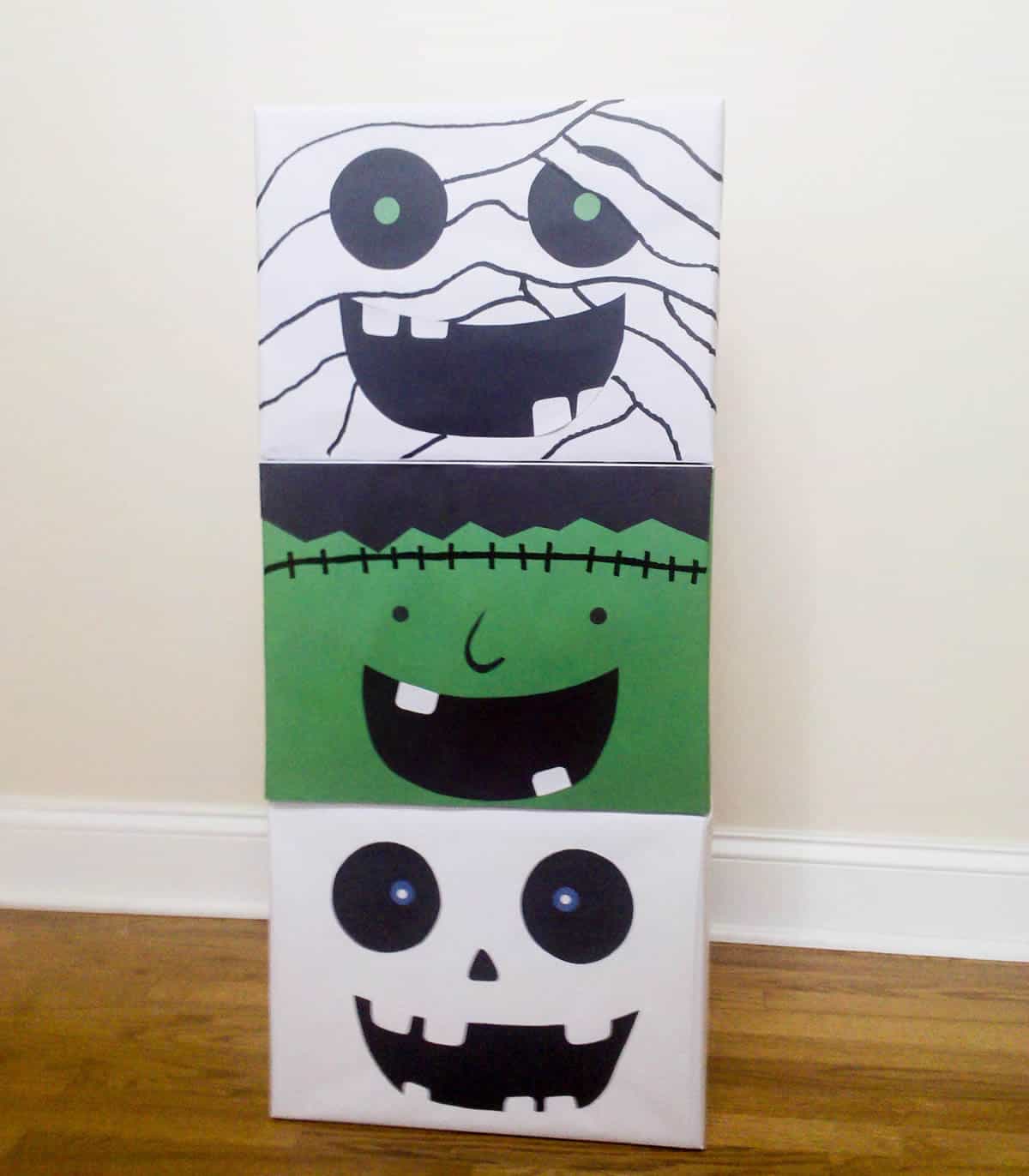 That year, my husband and I were both room parents; he was in my son’s room and I was in my daughter’s that year. I had a meeting with my parents to plan our fall festival party and he went to a meeting with the mom’s from my son’s class. When he got home, I asked him…so, what did they give you for a job? He said, they just wanted him to bring in boxes with holes cut in the tops of them. They were planning to do that peeled grape (eyes), wet spaghetti (brains) thing where the kids put their hands in and try to guess what the gross thing in the box is…you know what I’m talking about. Anyway, his job was to bring in boxes. (Yeah, sure, give the “dad” the easy thing ;)

In any case, he didn’t just bring in boxes. He made these cute characters! A mummy, a Frankenstein and a skeleton. You guessed it! After I saw them, I wanted to make aaaaalll the decorated boxes! We need to make a vampire and, and a witch and…yep, you guessed it! We still have just the three lol! It was such a great idea…he had fun boxes for the game, but it was also a perfect way to decorate the class room and make it feel festive. We still bring out the boxes each Halloween to decorate our house. 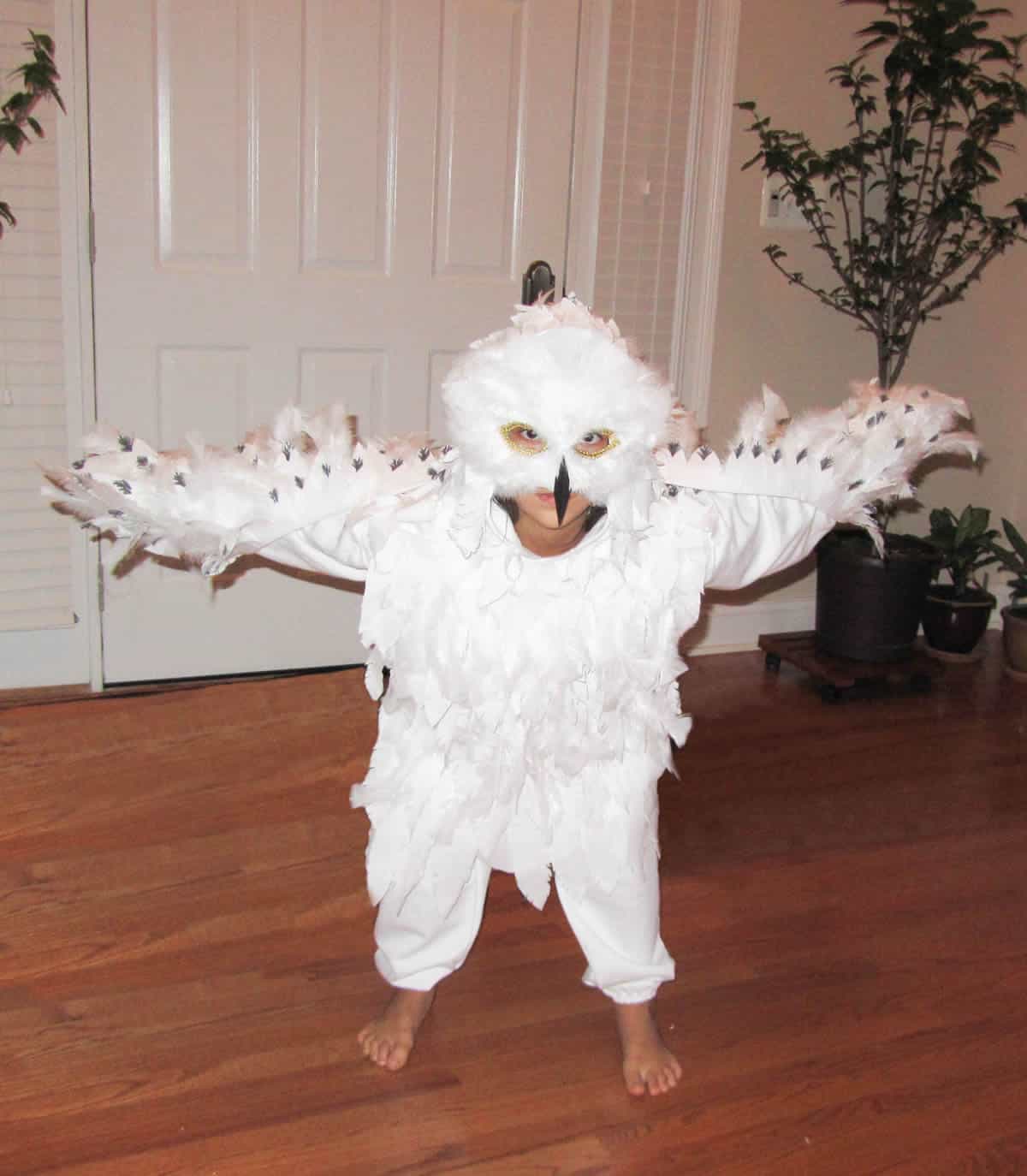 I’d like to tell you that it’s not all arts and crafts here all the time, but it kinda is. I hope you’ve enjoyed this little trip down memory lane. Flash forward to today. Halloween is almost upon us and we need another hat. Sadly, not a mad hatter kind of hat…but that’s okay…my husband is on it!

Lady you and the hubby are too talented! I absolutely adore the owl and Hershey bar costumes they are so cool. My husband is a dragon fan so he would have lived one o our kids to come home and want him to do that one! What fun to have little ones to dress up! Hope ya'll have a beautiful Hallows Eve! Thanks for sharing all the great ideas!

Aw, Heather, thanks so much for your lovely comment! It made my day :) I hope to share the dragon and other costumes we've made sometime in the future. When we were making the dragon, it reminded me so much of my parents making a dragon for my brother when we were little. I hope we're creating fun memories for our kids as well They're growing up too fast for me!