Welcome to Flashback Friday, a new series on The Merchant Baker. Here, I hope to share some of our creative endeavors… projects that we worked on well before the blog.  Most of the pictures in these posts will likely be home photos that were never taken with the thought that they’d be published, so I’ll need a little leeway on judging picture quality.  (Although some are much better quality than my early recipe posts, so there’s that.)

I know Throwback Thursday is all the rage, but I really didn’t want to jump on that bandwagon (much to my husband’s protests.) Fridays work best for me, so I’m breaking from the pack and we’ll just see how it goes. So, if you’re interested in learning more about our creative projects, read on. If not, there will be more recipes coming next week :)

Let’s talk birthday parties and Halloween costumes.  My husband and I are pretty insane when it comes to these things. Sometimes the insanity is because our kids come up with big ideas that we try to execute, and sometimes we simply get caught up in a stream of creativity and find ourselves creating decorations, making costumes or decorating cakes at 2 am the night before the event. 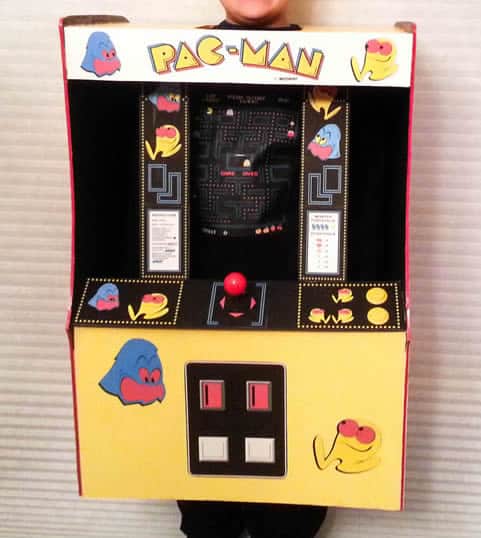 You know how some kids change their mind 100 times on what they want their costume to be for Halloween? Mine don’t. They go through phases of interest and then Halloween costumes and birthday parties just get swept up into the theme.  Once they get an idea, they stick with it even if I try to talk them out of what seems like an impossible feat. (Really? You want to be a Blue Morpho Butterfly, not just any butterfly?)

Enter the Pac Man phase for my son.  He said he wanted to be the video game for Halloween one year. Not Pac Man himself…the game. My brain was reeling…but my husband had an idea and was really excited about it. Does it require any sewing? No? Great! This can be your project :)  And he was off and running… 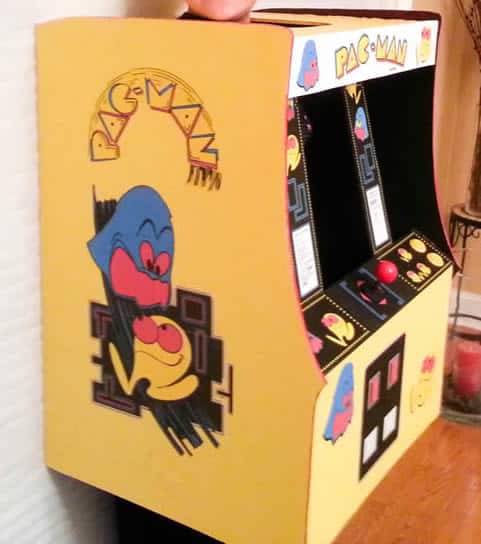 He used yellow foam core from the craft store to build the shell. He searched for images on the internet to print, cut and paste on the walls and front of the costume.  He found a joy stick around the house and ordered some push buttons on line.  Then, because it had to be realistic, he used those little recorders from Build-a-Bear and recorded the familiar sounds of the game, so that when you pushed the buttons, it sounded exactly like you were playing the game.  For the screen, he printed out an image of the game onto transfer paper and ironed it on a black shirt. He also added shoulder supports and pads inside the costume, so that it would be comfortable to wear.

My husband had a blast making it and I’m pretty sure he was more excited than my son was. Not that my son wasn’t thrilled with it.  He LOVED his costume!  When we were at the school’s fall festival, kids were trying to come up and play!  They thought he was wearing a real game that worked! And he won the costume contest, much to my daughter’s chagrin. 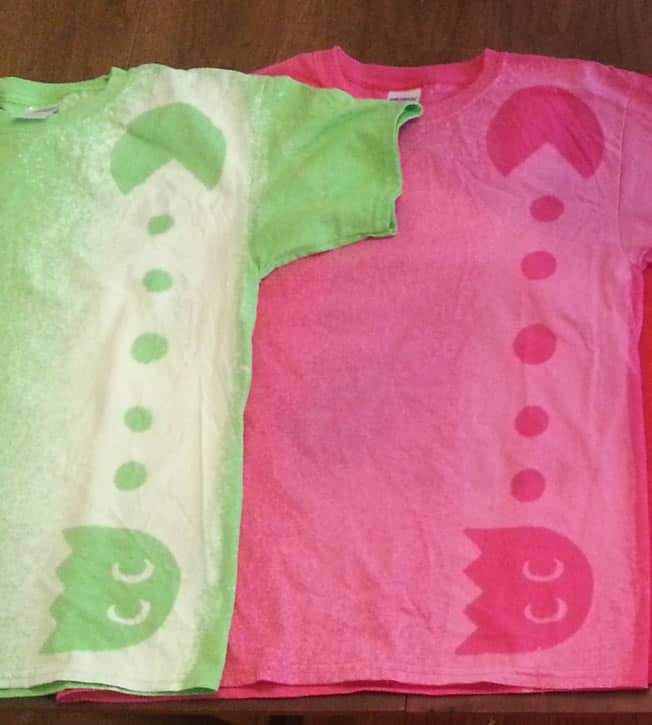 Months later, when his birthday rolled around, he was still deep in the Pac Man phase.  No surprise, he wanted a Pac Man themed party.  We’ve had many themed parties at our house, but this one was going to be off site.  That meant no decorations needed, just a great cake and some goody bags. Fairly low key for us. No, problem!

However, the cake was a bit of a feat, so I’m going to post all about that in Part Two.  Let’s talk goody bags instead.  In the early years, we used to buy lots of theme-y little toys and games and make some really fun goody bags… you know, the kind that your kids tear open, play with for 5 minutes and then quickly becomes trash?  I’m sure some of those might pop up on one of these posts. But somewhere along the way, we decided that we wanted to make that little take home gift something that might be able to be useful for more than 5 minutes. 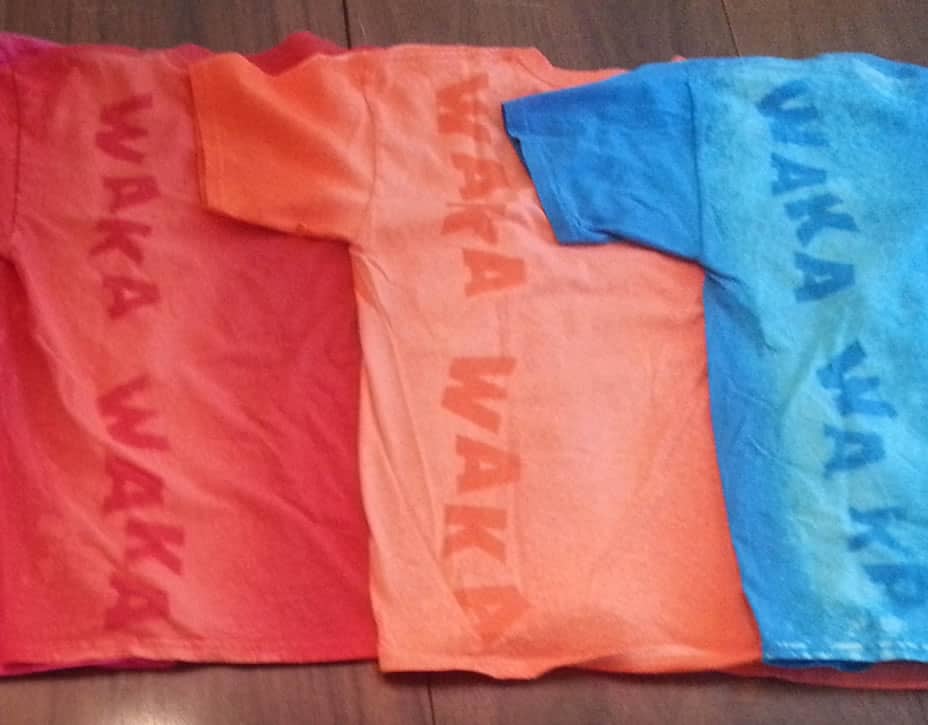 For this party, we decided to make shirts.  We had done it with a previous party and it worked out really well. We wanted the shirts to be fairly easy to make, so we went with a bleach process. After going back and forth a few times, we agreed what the design would look like.  My husband drew and cut out the characters and letters from card stock and then placed them on a rainbow of different colored shirts.  A heavy piece of card board was placed inside the shirts to prevent any soaking through from front to back.  He used a 1:1 bleach to water solution (one part bleach, one part water) and sprayed the solution lightly over the cardstock shapes on the front.  Then he flipped it and sprayed the letters on the other side. He had to work quickly because the bleach on the front continues to get whiter while working on the back. (If you decide to do a two sided shirt, always start on the side that you want the lightest.)

When the shirts reached the desired lightness, they went into a bucket of cold water to be rinsed to stop the bleaching process. (Use gloves to protect your skin.)  He then repeated the process for each shirt using the same card stock shapes and cardboard insert each time.  When they were all done, we rinsed them thoroughly again and then threw them in the wash. (I think we used one of those color catchers so that the colors wouldn’t run.)

This was our third time making shirts for a party, so we pretty much had the process down.  When they finished in the washer and dryer, we ended up with a bright pile of fun shirts that could work for girls or boys. (We had yellow too, but it didn’t make it to the photo.)  We added in a bubble stick, because, you know, everyone loves bubbles!  I wrapped up the shirt and finished it by attaching a thank you tag my husband printed up for me.

The great thing about goody bag shirts is that for kids, it’s kind of like going to a concert and getting some swag.  Lots of the kids that were at the party over the weekend wore their shirts to school the following Monday. For my son, it was the gift that kept on giving.  He was so excited to see everyone in their shirts, especially since he was wearing his too! 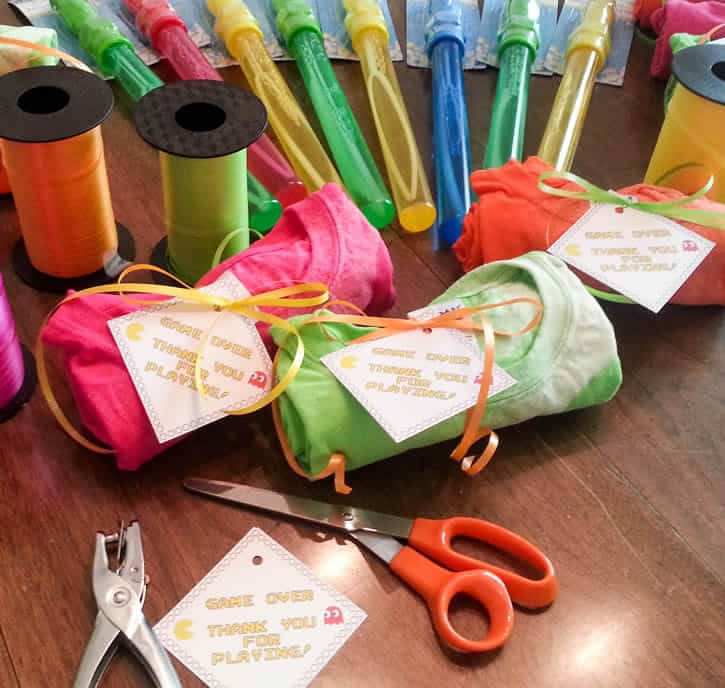 Hi! I love the shirts. Out of curiosity, how long did the bleach/water combo need to sit to get to this "desired lightness"?

Hi Angela! The bleaching process goes fast! Each color shirt took a different amount of time because the different color dyes in the shirts reacted to the bleach differently. You're actually going to watch it happen before your eyes so you'll just stop the process as soon as it looks good to you. It could take as little as 30 seconds or longer than a minute to get it where you want it. The important thing is to make sure you have everything ready when you start. You should have your bucket of cold water ready to rinse your shirts in. My husband took a piece of cardboard (about the size that would fit into a shirt) from a box and covered it with packing tape so that the cardboard wouldn't get soaked and he could use it over and over. He put down a big piece of plastic to work on (he did this on the driveway) That will give you a clean surface to lay the shirt on. Do only one shirt at a time so you can stay on track with the fast process. You'll place the board into the shirt to keep it nice and flat. Lay your card stock shapes on top, lightly spray them (don't soak, you can always spray more if you need to) and then remove the shapes quickly and set them aside. Flip the shirt, quickly place the shapes you'll use on the back. Spray. Remove shapes and watch the shirt lighten. When it looks like you want it to, remove the board from inside the shirt, then dunk the shirt up and down in the cold water to rinse out the bleach. Squeeze out excess water and set it aside while you work on the next shirt. Wear gloves to protect your hands and remember, wherever the bleach hits, it will lighten the fabric. We like to think that any excess spatters or unplanned things just become unique to the shirt. You could always take an old tshirt and test out something small if you want a little practice first. Good luck!

I love this theme! Those shirts came out great. I used to go all out when my kids were little- but all the work was on me! You guys are a great team :)

Thanks, Veronica. It's always a labor of love and I'm thankful I have a team to work with :)

Wow! That is super creative. It must be so nice to have a creative husband to help with executing the kid's costumes. When my kids were younger I always made their costumes,my husband is decidedly craft challenged. One year, my son was a present-I used a big box,etc. The only problem was when he wanted to sit down. Woops! Should have planned that one better.

I'm thankful that he's creative, especially since his strengths are different than mine. We work really well together, but sometimes we get a little out of hand..."and then we could do this, and then we could do that and, and, and..." Thanks for sharing your costume mishap...we know better than anyone...the best laid plans... :) I had one with the cake coming up in Part Two...stay tuned...