Hey there.  Checking in to say I haven’t forgotten about you. 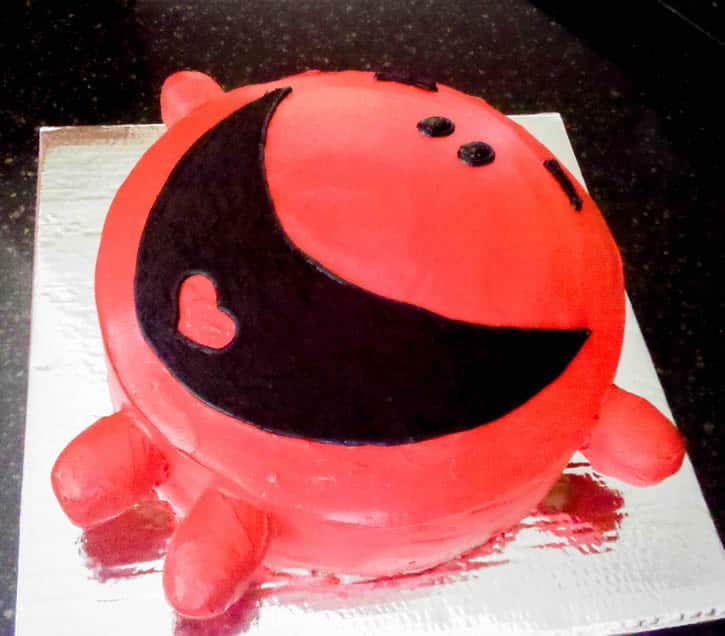 What’s been going on here? Well….I was getting a couple of posts ready for you last week and they were both recipe fails. They shouldn’t have been. They were both supposed to be slam dunks, but I was probably distracted with getting ready to go on a trip and making a thousand or so lists to insure I remembered everything we needed to pack. I think that’s part of what they mean when they say, “Made with love.” Your head/heart has to be in the game. For all I know, I forgot something or didn’t measure something correctly. All I know is that they were good, so not a complete fail…but they weren’t great. And if it’s not great, I can’t post it. My head was in the “what the heck do we need to bring to a cabin in the woods” mode and unfortunately not in the creative cooking/baking mode. 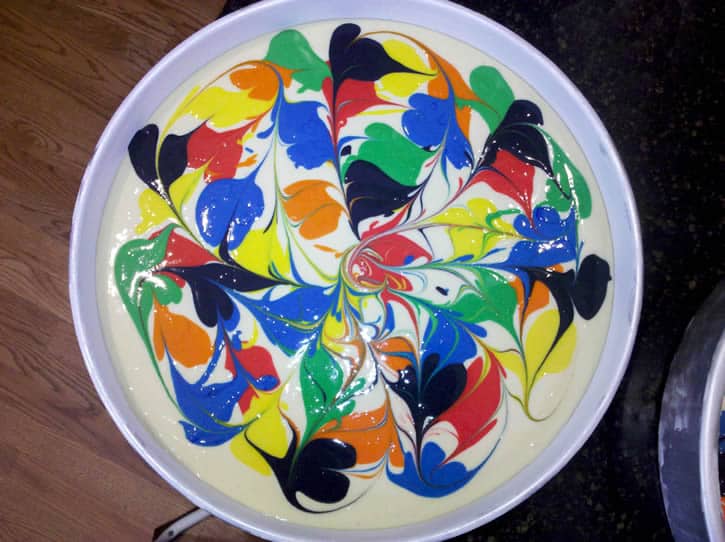 This was clearly evident as I was also making a quick batch of pancakes that same day for breakfast. First I picked up the wrong measuring spoon for the baking soda.  Instead of a teaspoon, I picked up a half tablespoon…so I quickly tried to identify the white baking soda that was on top of the white flour and scooped out the excess while trying not to scoop out salt or any other white ingredient. That was before I accidentally sprinkled cumin in the mixture instead of cinnamon. Ugh! Thankfully, it was only one quick dash of it before I realized that my pancakes were smelling more like chili than pancakes. (Cumin…the “secret” ingredient to great pancakes lol!) I made another mistake that I can’t even remember now, but none of that is like me and I should have stopped and not tried to make the other two recipes I had planned for the blog, because my head was certainly not in the game.

So…no food to post. Ran out of time. But I’ve been roughing it (read no dishwasher) on top of a mountain for the past week so I’d like to think we were in this together. Now we’re back and I’m posting a Flashback Friday instead. Flashback Fridays are a time to share stuff that happened before the blog. The photos are generally just the ones I snapped for personal use, usually from my phone, so there’s no special backgrounds or editing involved.  My first Flashback Friday posts were from the Pac Man Party and can be read here and here.

Today, however, we’re going Kimochi!  I’m thinking of Kimochis because of the movie that opened last week, “Inside Out.”  It’s a movie about feelings.  Kimochi means “feeling”  in Japanese.  They’re meant to be social/emotional educational toys, but my kids saw them displayed in Whole Foods one Christmas, years ago, and they were sold. It was pretty much the only thing they wanted for Christmas and the big reason they wanted to go to Whole Foods with me each week.

Each character has it’s own personality and has a pocket you can put “feelings” into. The feelings are little pillows with faces on one side and the feeling written on the other. We bought them each a character and a few feelings. Then, they wanted to collect them all….all of the characters, big versions and small versions and all of the feelings. I didn’t mind because the characters and feelings were so cute and we could use them to teach as well. 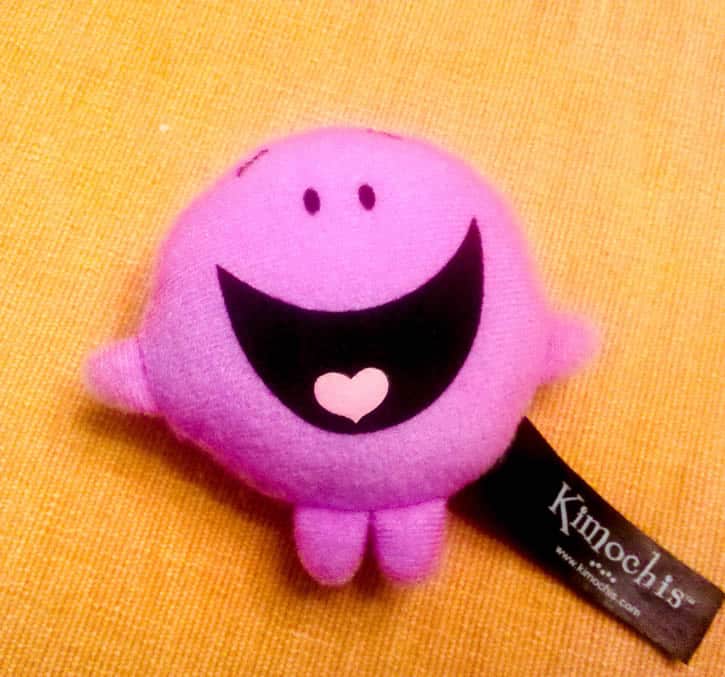 My son’s favorite feeling was “Happy,” and before I knew it, he decided that he wanted a Kimochi birthday cake. Thankfully he picked a feeling (an easy round shape with a face) as opposed to one of the characters which would have been slightly more difficult. (Though I was secretly rooting for “Cloud”, the cute blue character, whose head does a 360 and changes from sad to happy.)

The cake was a two layer 12″ round that I made with (gasp!) yellow cake mix with added sour cream and some extra ingredients from this recipe. I adapted it using 6 large eggs instead of 8 egg whites for this particular version. It’s a great recipe to use when you need lots of cake batter.  It always gets rave reviews. When I make large cakes, I have often cheated and use an amped up box mix because I haven’t yet worked on scaling up my scratch cakes so that they’re fool proof if I quadruple them. I also didn’t have a good yellow cake recipe that I loved back then. This was years ago, though. Now I usually buck up and make four or so individual batches of batter so that my cakes are completely from scratch. (My current go to yellow cake is Mel’s and I used it for A Tandy Birthday Cake and The Pac Man Cake.) 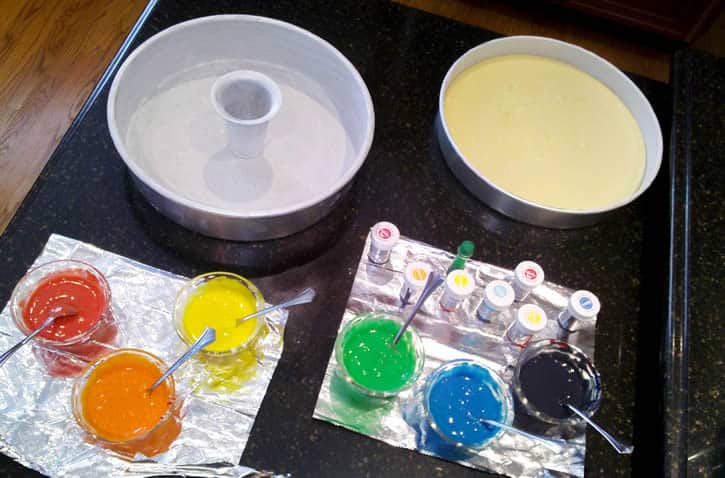 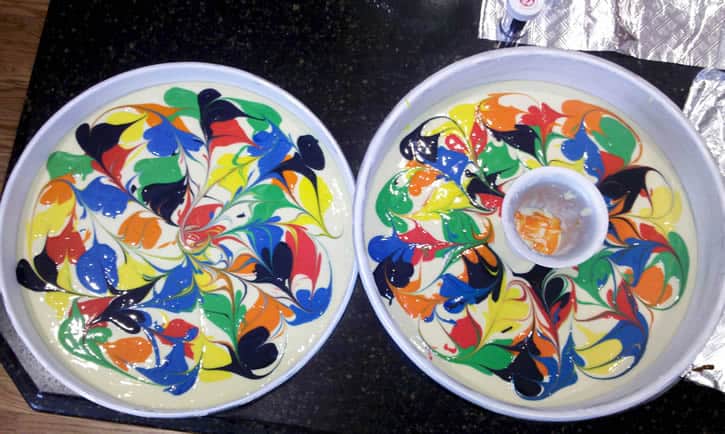 I took some of the batter and made some rainbow colors to swirl through the cake, just to make it a bit more fun for the kids when I cut into it.  I don’t have any pictures of a slice of cake, which is frustrating, so I’ll have to leave that up to your imagination… 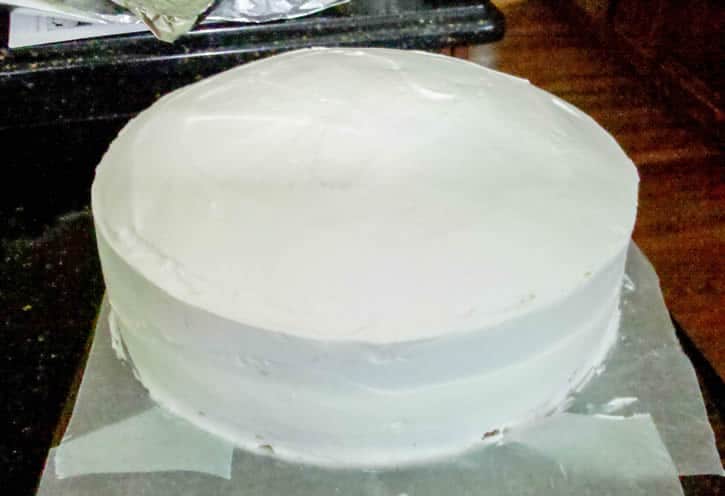 The frosting?  It was my go to Whipped Cream Cream Cheese Frosting. First, I did a plain crumb coat, then dyed another batch red for the final coating. Why is it red?  Well, my son was deciding between the red “Excited” Kimochi (seen in front of the dove…you know, the one rolled on it’s side with it’s hands up in the air looking really excited?  Yeah, that one :) and the orchid colored “Happy” Kimochi. I used the color from one and the face from the other. They have similar faces, so I thought it was a good mashup.  I also used this same frosting (undyed) to fill the cake, but I added mini chocolate chips which made for a perfect filling.  The hands and feet are Twinkies that I cut in half, then used wooden skewers to attach them to the cake. I dyed  some of the frosting black to make the eyes, eye brows and the outline of the mouth.  Finally, I filled in the mouth with crushed up chocolate sandwich cookie crumbs.

And there you have it…one “Happy” Kimochi birthday cake.  It might be the only one ever made.  But in our house, you get to choose whatever kind of cake you can dream up…and this one made my (then little) boy 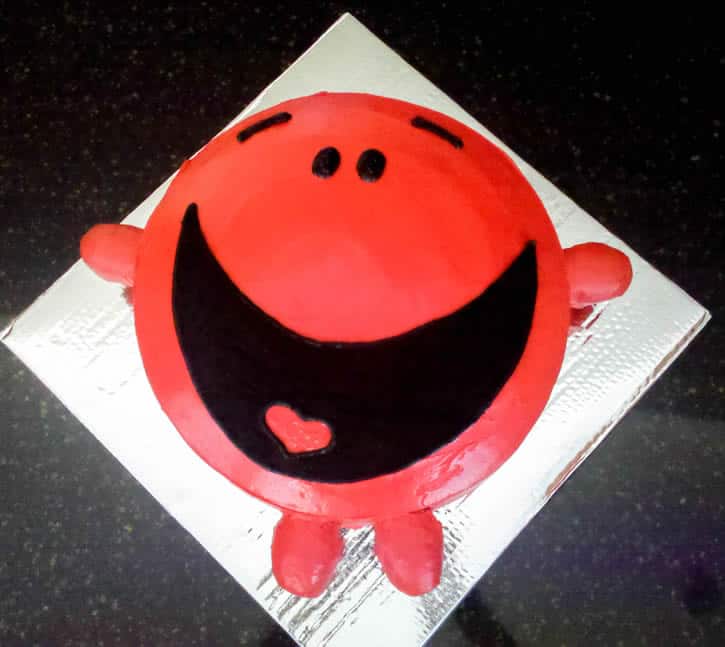 Hi, how did you get the color red, did you use powder or gel and what brand?

Hi Judy, I used Wilton "no taste" red gel coloring. Using enough gel to get the color I wanted made the frosting softer which worked for my cake because I didn't have plans to do any piping. I haven't used powdered color, but that seems as if it would be a great choice if you needed the frosting to maintain its pipeability.

Hi! 2021 and I just discovered your whipped cream cream cheese frosting and I loved it! I actually failed a cream cheese frosting and looked for stable recipes and stumbled upon this gem. You saved my day! Anyway, I'm planning to use it again but the cake needs a red and black color which would be the same one for your kimochi cake. Please please, how do I make my frosting dark colors like red and black without using any cocoa as some suggest? Any fool proof way that won't hurt the consistency of the whipped cream cream cheese?

Divine, I use gel food coloring for this frosting. I've used Wilton and Americolor to achieve deep colored results. If I buy Wilton, I get the one that says, "red, no taste." I do prefer Americolor these days. It's much easier to use because it's in a squeeze bottle and the colors are great. I will say, though, that whenever I have to use a lot of food dye, even if it's gel, it does begin to change the consistency of the frosting. That's why I never do a deep dye color if I need to pipe. You'll see all of my cakes that use this frosting and are dyed have no piping. It's not like a buttercream that can stand up to a lot of add ins. I hope that helps!

This cake is so cute.. I would love to cake... but colour combination are not matched in this cake..

Thank you, Swagatika! If you read the post, you'll see that my son couldn't decide between the red "Excited" Kimochi and the pink "Happy Kimochi" so I made a red Kimochi with the happy face. Of course, you can dye your frosting any color you wish. Then, you can have a matching bright pink frosting for your cake.

If your go to frosting doesn’t harden up, how does your crumb coat not mix with your vibrant color coat? Thank you

I would love to see you make a cloud cake!!

After I typed that long response...I just realized that you probably meant the kimochi cloud character, lol! Yes, a cloud cake would be adorable!!!

I don't know if you mean a cake that looks like a cloud...but one year, a long time ago, I did make a cake for two girls who shared the same birthday. One girl wanted a candy party and the other wanted a rainbow party, but it was going to be one party. I created two large layer cakes (each girl picked their own flavor) and frosted them with my whipped cream cream cheese frosting. Then I baked a huge sugar cookie arch and frosted it like a rainbow. I stuck one end of the rainbow cookie in one cake and the other end in the other cake, so that the rainbow cookie connected the two "cloud" cakes. Then, I baked big sugar cookie letters and spelled out their names. I frosted each letter a different color so that I had all the rainbow colors. I attached the rainbow cookie names to the bottom layer of each cake. They were the height of the whole first layer. Then, I placed piles of gold foil covered chocolate candy coins on the top of each cake where the rainbow cookie was attached. I decorated the cakes with candies and voila! Eighteen hours later (no joke) I had the most amazing cake/s. Unfortunately, I don't have any photos suitable to share on the blog, but the cakes looked so fun! We made giant lollipops and giant pieces of candy for the walls and candy trees for the tables. We had a whole candy making station as well. It was a huge success! So, I'm not sure if I'm ever going to tackle another cloud inspired cake, but never say never :) Thanks for your enthusiasm!