You know how when you think you’ve “invented” something new…. 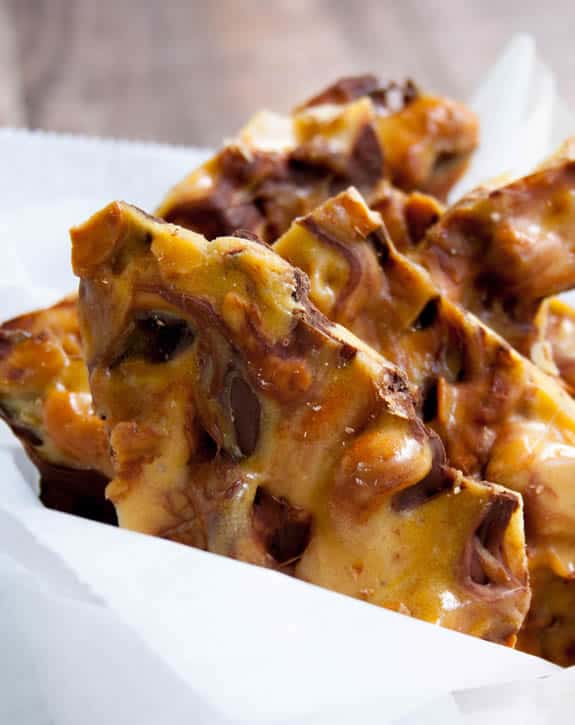 And you even come up with a name, like One Bowl Brittle Bark, and pat yourself on the back because it’s both descriptive and catchy?  And then you google it and find out that it’s not new?  Yeah.  This is one of those times.

Another blogger once told me never to google anything, just make it and be happy. This time I made it, packaged it for teacher treats and was really excited about it…. and then I googled it. Sigh. But hey, I’m still happy because this stuff is really good.  And it’s fast and easy. 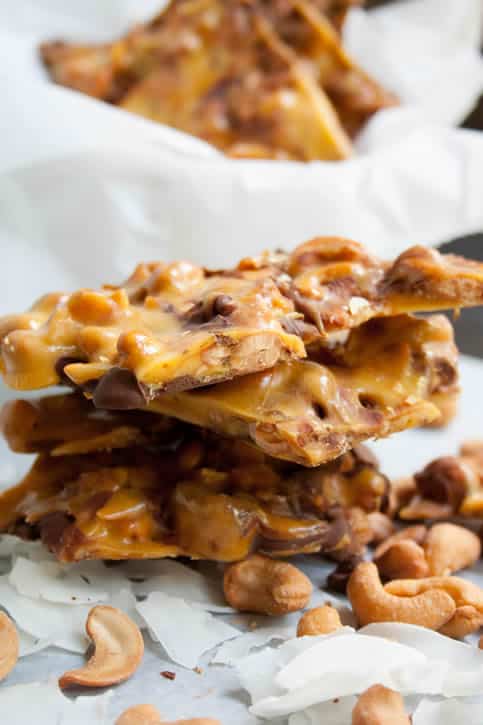 The assortment of cookies and candy usually hits the 12-16 mark, but during the season, I always find recipes I want to try that are new.  This time I happened upon peanut brittle and it looked so easy I couldn’t resist. 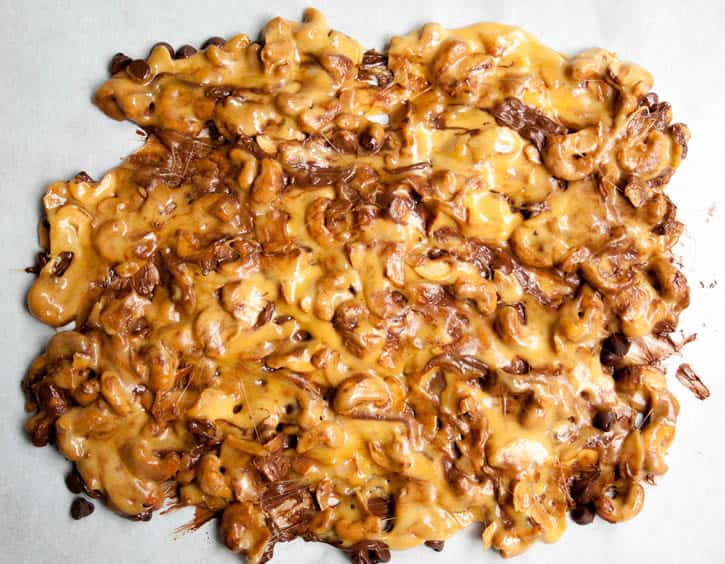 Peanut brittle. I often think of it as a treat from my mother’s  or grandmother’s generation, but I still love it and wanted to see how it would turn out.  It’s made in a microwave and I’ve only made candy stove top before, so I was intrigued.  No need for candy thermometers either.  Cah-razy! 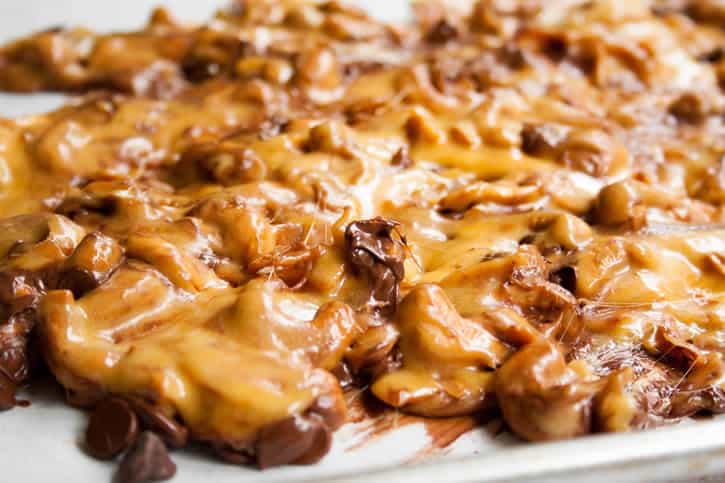 So I mixed up my sugar and syrup.  Nuked it for 5 minutes.  Stirred in the nuts and butter.  Back in the microwave for 4-5 more minutes or until it started getting golden and caramel colored. Out of the microwave…stirred in vanilla and baking soda and quickly spread on a sheet.  Done and done.

Oh…and it was delicious!  The baking soda makes the whole mixture bubble up which lightens up the crunch.  In other words, you can take a bite without worrying that you’re going to crack a tooth. That’s how all good brittles should be. 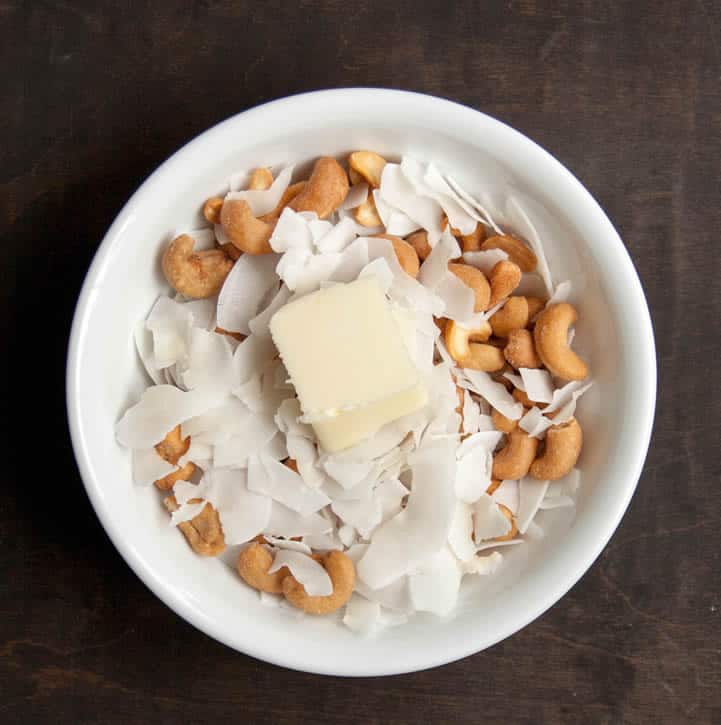 So, flash forward to making some teacher treats.  I decided to make candy instead of baking something. I chose this easy brittle, but wanted to switch up the traditional peanut variation.

I thought chocolate would be good, but I didn’t want to get involved in dipping each piece. I decided I would try spreading the brittle on top of the chocolate. I’ve seen it work for other recipes, perhaps it would work here too. 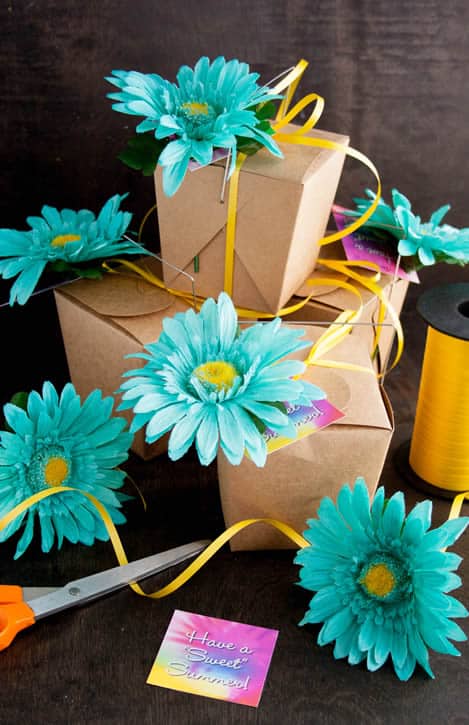 I threw some chocolate chips on a tray, made some brittle using cashews and coconut…then when it was time to spread it, I just poured it on top of the chocolate and let the heat melt the chips while I quickly spread it.  I wish I had some photos of the process, but really, it goes so quickly, there’s no time for stopping to shoot.

I did have a photo of the lonely little chocolate chips spread out on a tray waiting for the brittle to arrive, but trust me when I tell you that an aerial shot of scattered chocolate chips not only doesn’t look appealing or interesting, it doesn’t even look like food, if you catch my drift… 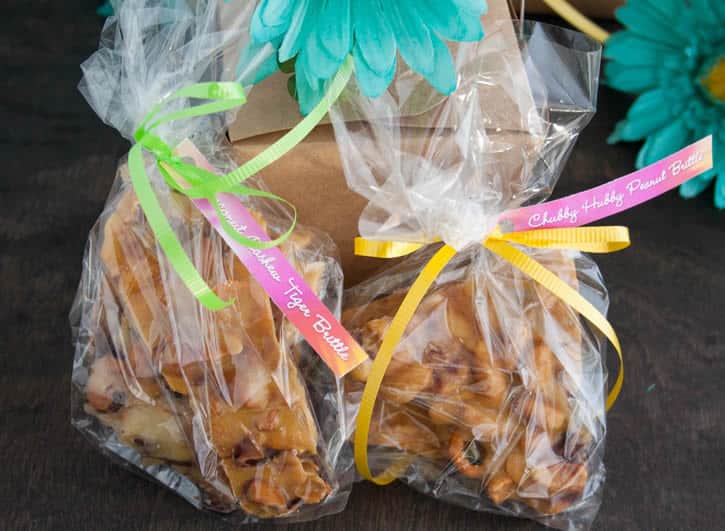 As you spread the hot brittle across the sheet you’ll get streaks of chocolate running through the brittle. I hoped it would all set up properly….and it did!  It was amazing!

You end up with this crispy crunchy brittle, chock full of nuts, but as you’re taking a bite, you get delicious creamy chocolate. Sweet, salty, creamy, crunchy, caramel-y addictive yum. 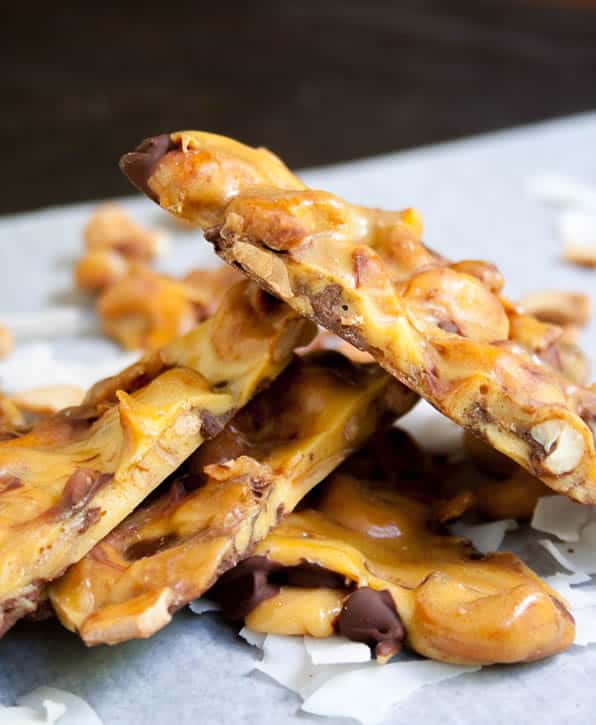 I considered calling it, “Tiger Brittle Bark”, because the gorgeous color of the brittle and the dark stripes of chocolate really warranted it, not to mention the exotic flavors of coconut and cashews…but it didn’t feel right.

I don’t know…all I could imagine was Tony the Tiger and breakfast cereal and cartoons. (And you know, this Brittle Bark is so much more sophisticated than that ;)  So I kept One Bowl Brittle Bark. (I know, I know.  It’s such a “sophisticated” name :)

Of course, this final name change happened after my teacher gifts were delivered, so their tags have different names. It’s elementary school…a perfect place for tigers and chubby hubby names :) 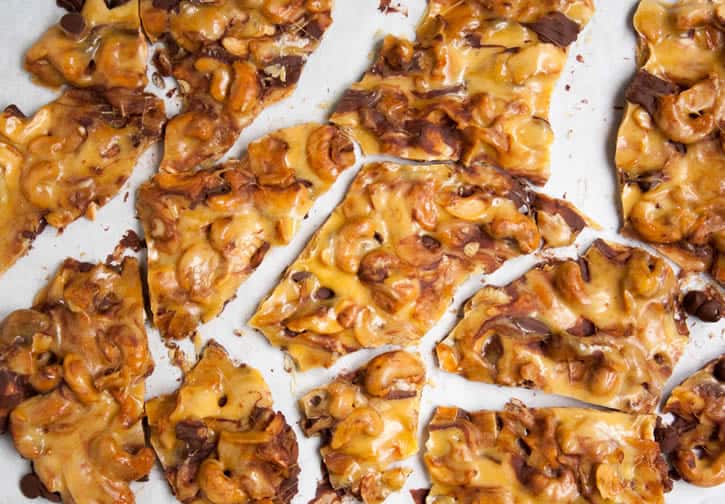 My first version was Coconut Cashew Brittle Bark.  I used the big unsweetened coconut flakes and they kind of melted into the brittle.

The whole thing smelled amazing when it was cooking.  The flavor combo was spot on and is perfect for those who like a hint of coconut flavor without all the coconut texture. 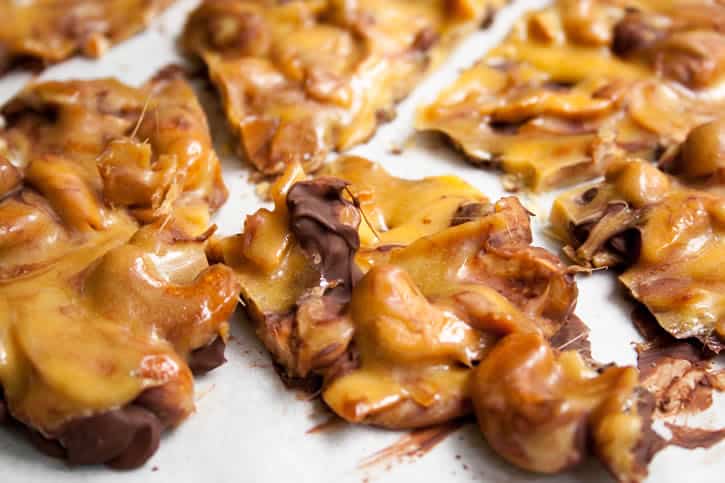 Then, I had another idea.  This one might be new ;)  I decided to put chocolate chips, peanut butter chips and pretzels on the tray for a take on the popular chubby hubby flavor combo. (I didn’t take any individual photos of that variation, because honestly, it looked just like the other bark. You can see how much they look alike in the bags with the chubby hubby tags above.)

I went back to traditional peanut brittle for this variation and poured it all on top.  The Coconut Cashew Brittle Bark was delicious, but I’m pretty sure the Peanut Butter Pretzel Brittle Bark was everyone’s favorite.

I can’t even tell you how good this was and unlike any candy I’ve had before.  I had one teacher tell me that she opened up one bag to taste it.  Then the other.  Then she went back to the first bag.  Before she knew it, half of both bags were gone.

So there you have it.  One of the easiest candies you’ll ever make. One Bowl Brittle Bark. 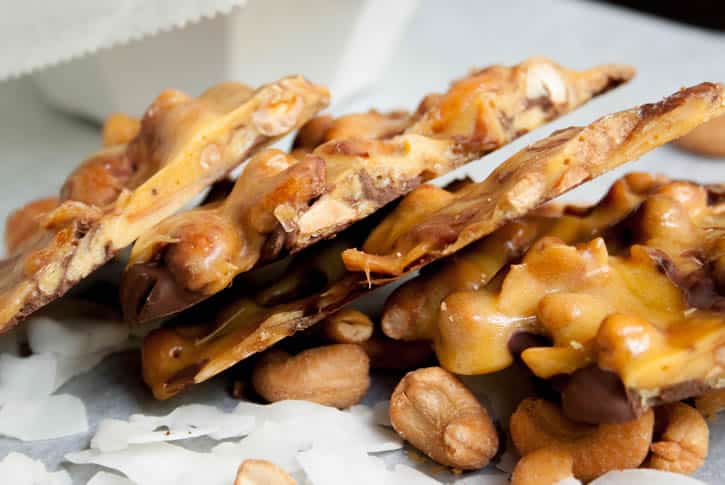 *Speed is key in this recipe, so make sure you have all ingredients measured and ready to go.

*Use only roasted salted nuts.

*I used mini pretzel twists because their open structure left lots of room to tuck chips into and around.

*Remember the sugar mixture is HOT so take proper care not to burn yourself.

*After you add your nuts/coconut, your time may vary depending upon your microwave and the bowl you use. I made many batches of this and in one bowl it was done in exactly 4 minutes after I added the nuts. With other bowls that were larger, I had to cook it as long as 8 minutes. Just cook it until you begin to see caramel colors developing. It's okay to open up the oven and quickly check it. If it still looks like clear sugar syrup, it's not done yet. I found that the larger the bowl, the longer it took. If you have a high wattage microwave, it could be much shorter. I like using glass bowls so that I can easily see what's going on. Just stay close and monitor it and you'll be fine.

*Spread brittle quickly. Don't spend too much time spreading or you'll break a lot of the bubbles created by the baking soda which keep the brittle light and easy to crunch.

*I actually used two bowls when I made this because I wanted to have my nuts, coconut and butter ready to pour in all together and because I was making lots of batches that day. It's not necessary, though. As long as you have them measured out and ready to go, this really is a one bowl recipe.

*Store cool, dry and air tight. Mine held up well in a zip lock bag at an air conditioned room temperature. Do not refrigerate.

I made this this morning. This turned out great! I made both varieties,but the kind with the pretzels and peanut butter chips were out of this world fantastic! i followed your recipe exactly and had a homemade treat in about 15 minutes. Also, I may have eaten some for breakfast. Nuts are healthy,right?

Oh yes...nuts are healthy...each time I broke off a piece, I kept telling myself it had lots of protein lol! I agree the peanut butter pretzel version is ridiculously good...it's kind of addictive...and so easy to make, it's truly dangerous :)

Oh, my! How I wish I was your child's teacher!!! What a wonderfully thoughtful, end-of-the-year gift!!!

This looks like a really good idea for a father's day present for my father in law who loves anything with peanut brittle. Thanks for a great and easy idea. I will let you know how it turns out. I really love your creative packaging!

Thanks, Cyndi! I was really surprised how easy and delicious it is. There's so many options with this recipe whether it's just using different nuts and making straight brittle, or adding all kinds of bases and going for a brittle bark. I loved all of them! As always, I look forward to your feedback!

Awesome gift idea! And easy to make, I am definitely going to be using this and passing the recipe along.