Flashback Friday is where I share some of our creative endeavors that happened before the blog. 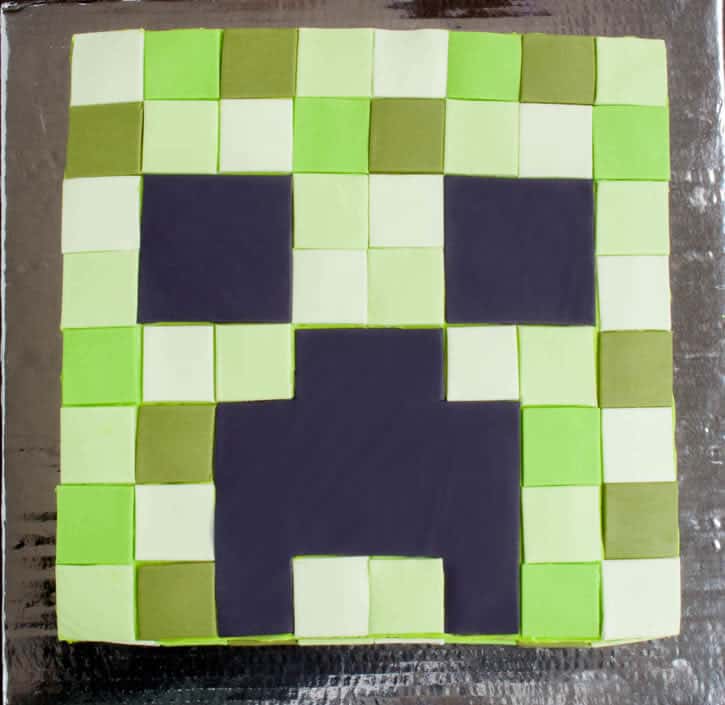 This one doesn’t flashback very far, but I know there are some passionate Minecrafters out there that could benefit from some party inspiration, so I’m sharing A Minecraft Birthday. (I was inspired by a lot of great things I’ve seen others do, I’m sharing how we pulled it together for our party.) The photos are still pretty “pre-blog” looking, so please forgive the quality; time to shoot and good lighting were in short supply. (In fact, a lot of the photos were just quickly taken with my phone.)

Clearly we’ve been going through a video game phase since last year’s party was all about Pac Man. My kids usually have running themes that start with what they want to be for Halloween then eventually become what kind of party they want to have. We always seem to have a full year of exploring whatever they are passionate about at the time. 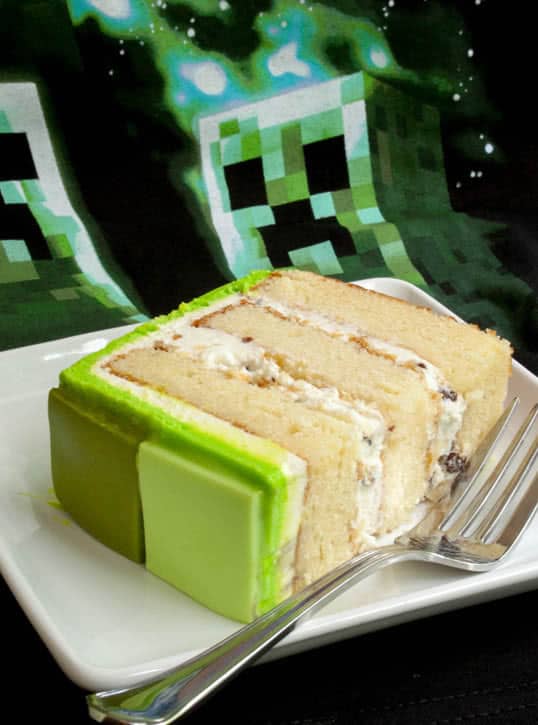 In the Pac Man phase, my husband constructed an amazing costume for my son, complete with sound effects. This time, the costume was EASY. I appreciate that since I’ve spent large chunks of my life creating and sewing costumes for my children. That year he wanted to be “Steve”, the default avatar in the game, and all we needed to do was make him a box body and buy a blue shirt, since we found the heads in the store. (My daughter is next to him. She wanted to be an Enderman. My husband made the enderpearl she’s holding and made an pick axe (not shown) for my son, since they didn’t sell them in stores at the time. Done and done. It’s NEVER that easy. (Although I’ll admit, I was missing the craft of our normally creative costumes.) 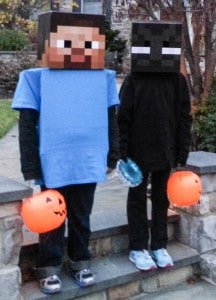 I was pretty sure after the Minecraft costume that we would eventually be planning some sort of Minecraft Birthday. I only hoped that his wish for a cake wasn’t going to be an impossible feat. I imagined he would want an entire Minecraft world, filled with all the structures and creatures that exist within it. But no, he wanted a Creeper cake, just the head of the creeper. Yep, I can do that!

I made his favorite cake, yellow cake from Mel’s Perfected Yellow Cake. I used  (correction-I used 12″) square pans, which were the perfect size for this, and made a full batch of cake batter for each of the three layers. I considered making more layers so that I would have a true cube, but I decided that we didn’t need that much cake in our lives and stuck with three. 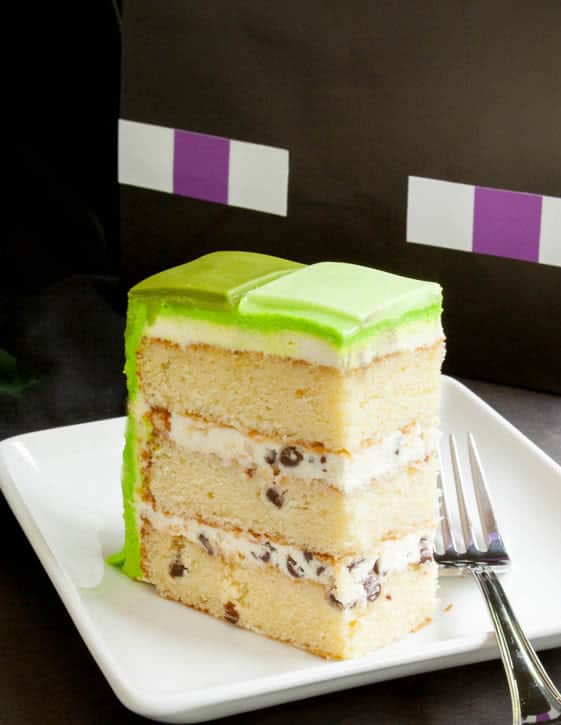 I used our favorite Whipped Cream Cream Cheese Frosting with mini chocolate chips folded into it for the filling. I made multiple batches of the frosting, first for the filling, then for the crumb coat and eventually to frost the final cake in a layer of green. I think I made about three or four batches of the frosting by the time I was done. I used Americolor’s electric green gel food color to color the frosting. I’ve given you a link to the individual bottle; mine happened to be part of a set I had. 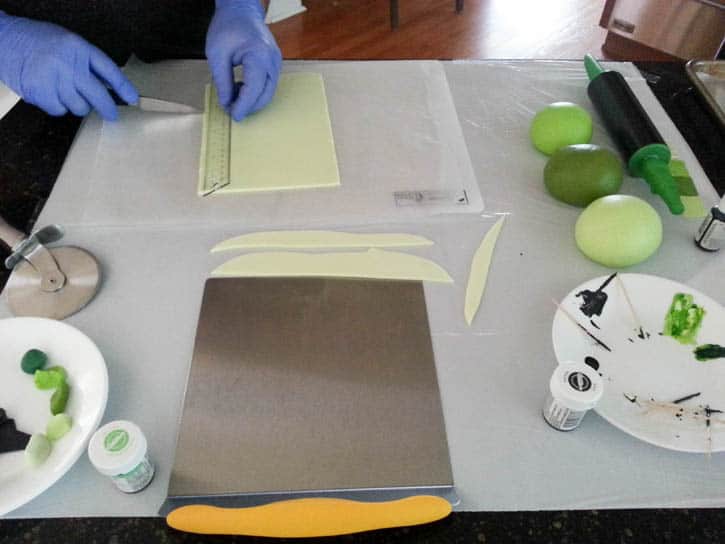 My husband took care of the fondant. He used the electric green again, but added black (from Wilton) and used the green in different amounts to get the desired changes in shade he needed for our pixilated creeper face. (Ignore the extra bottles of green food coloring seen in the photo. We only used the electric green and the black.) Then he made a map of how the colors would lay out on the cake and figured out how many little square tiles he would need to cut. 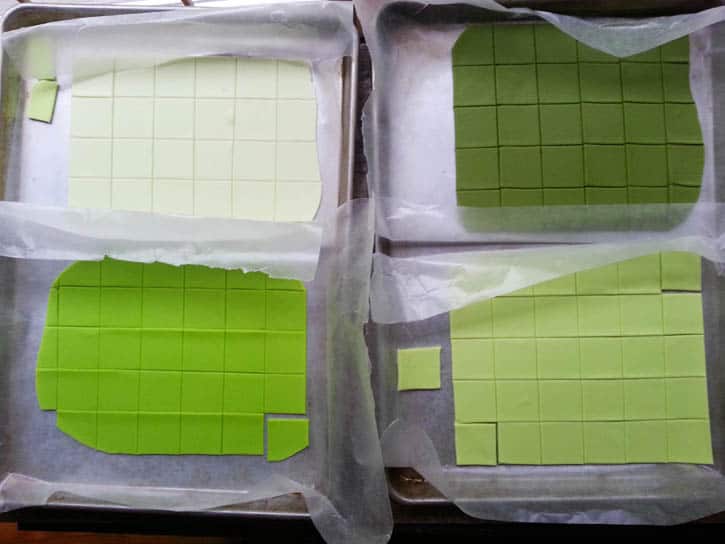 When it came time to “decorate” the cake, we had fun following the map and placing each tile in it’s appropriate spot. It was like coloring by number and certainly one of the easier cakes we’ve decorated.  It was fun watching the creeper face come to life one tile at a time. I used additional tiles around the base of the cake to finish off the bottom edge. (If I had made a true cube, I could have completely covered the sides in tiles, but the bottom row worked out great for me.) 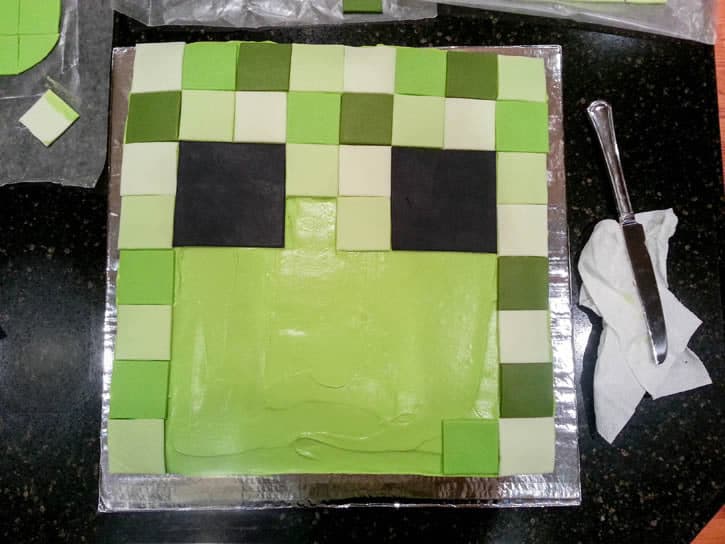 I don’t have a good photo of this, but one of the absolutely coolest things about the cake was how we did the candles. Since the top of the cake was covered in tiles, I wondered how we would place the candles without completely ruining the face. I came up with the BEST idea!!! I bought silver metallic candles  at the party store that were about as thick as a pencil. I placed them on an angle coming out from the left and right sides of the head and made a row of candles. They looked like a row of torches coming out of walls!  (If you’re a Minecrafter, you know about the torches.) It was PERFECT, PERFECT, PERFECT and created a lot of theater when the candles were finally lit. They were also really fun to blow out! (If you try this, remember the wax is going to drip directly onto whatever is below the candle, so make sure you’re prepared for that.) 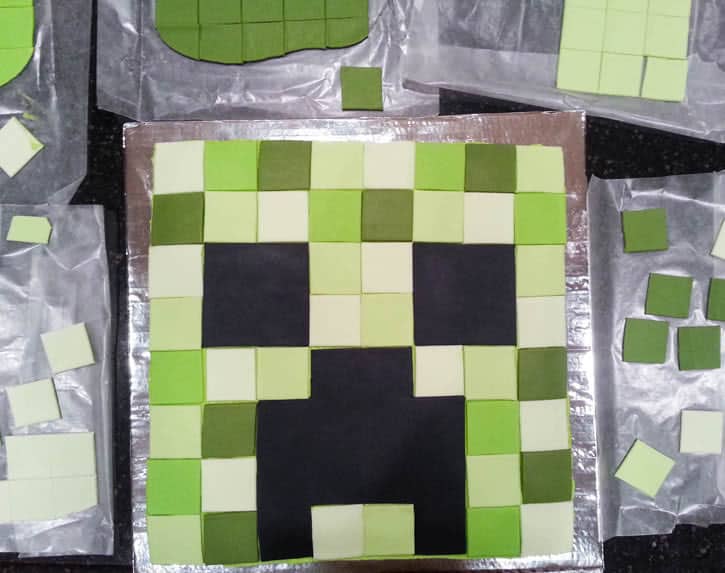 Onto party favors…in Minecraft, you can “mine” different ores that start out as blocks, but when you mine them, they turn into pieces of that “ore” that the player collects (or so they tell me :)  My son picked which ore he wanted mined. My husband took his list and created four blocks of ore (TNT, gold, redstone and diamond) by printing papercraft images onto cardstock. Here’s the link or click on the image shown on the left.

We’ve already resized them for you! Just print on cardstock and cut them out. And, umm, assemble them. It’s pretty easy, but if you have issues, just ask a minecrafter to do it for you. 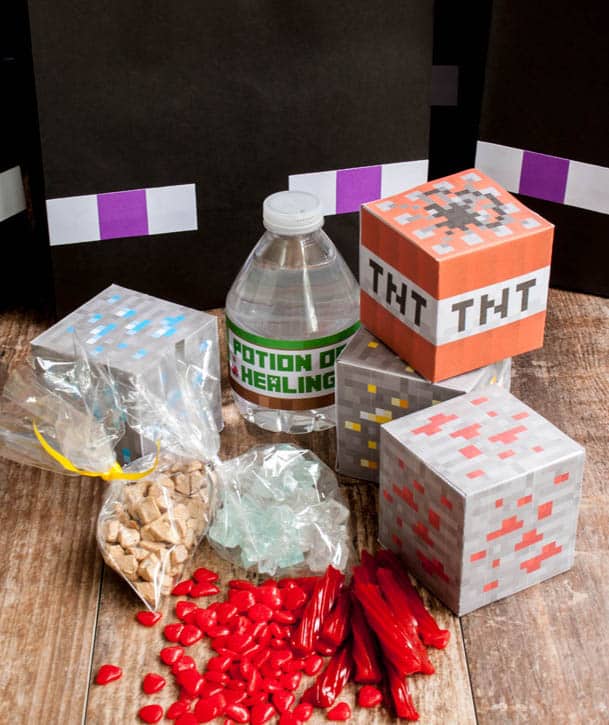 In each block we placed the “ore.” For the TNT, I bought red licorice twists, cut them to the block size, bundled them like TNT and placed them in the block. For the redstone, I used cinnamon red hots. I found gold chocolate rocks on line and they were perfect for the gold. I had to tell some of the kids they were actually edible :) Finally, the diamond was rock candy. I placed all of the candy into small bags and we sealed them in the blocks.  Actually, my son did all of the filling and sealing.  He loved being a part of it and he’s a papercraft master, so he was perfect for the job.

Of course, they also have “potions” in Minecraft, so we took small water bottles and relabeled them with these “Potion of Healing” labels. (They’re at the bottom of the ore sheets.) 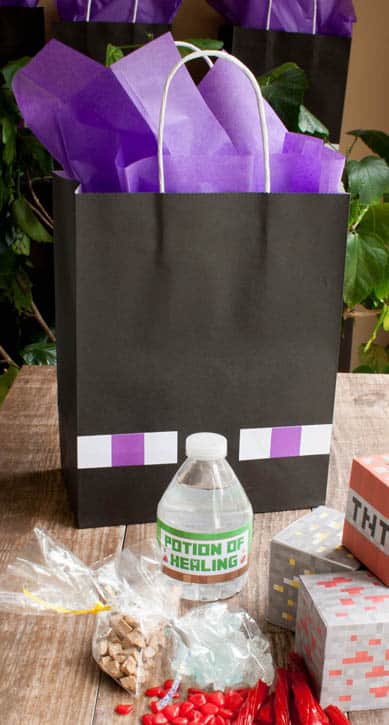 I decided to bring in the enderman character for the actual goody bags. I used black handle top paper bags and my husband glued on some enderman eyes using purple and white paper.  Four blocks of “ore” and “Potion of Healing?” I’d say that was a good haul from a day of mining:)

But wait, it’s not over yet! You know birthdays can go on forever…let’s see, we have the actual birthday day, the day we have the party (because it never works out to have it on the actual day) and then we have the school celebration with the class. Oh, what to do for that? 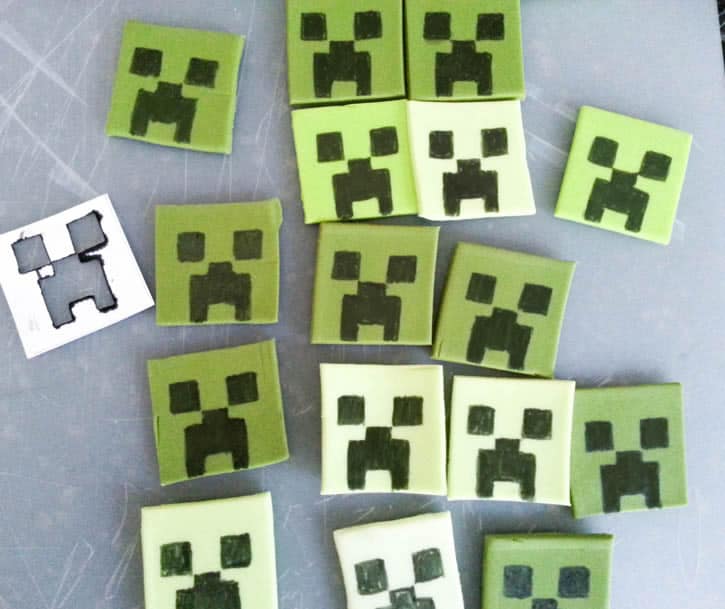 Well, I had some tiles leftover from the cake, that I thankfully did not discard. So, I baked up a pan of boxed brownies (yeah, I don’t always make them from scratch:) then frosted them with a shiny chocolate ganache (that was from scratch ;) It’s one of my favorite ganaches for coating, dipping etc.

I bought a food marker in black and asked my husband (with a sweet smile) to draw creeper faces on the leftover tiles. He made a little stencil and had them all done pretty quickly. Each tile was placed on the ganache before it had set so that it would firmly adhere to the brownie.  Then, I just placed each creeper brownie on a paper liner and we were good to go!  It couldn’t have gone better had I planned it! 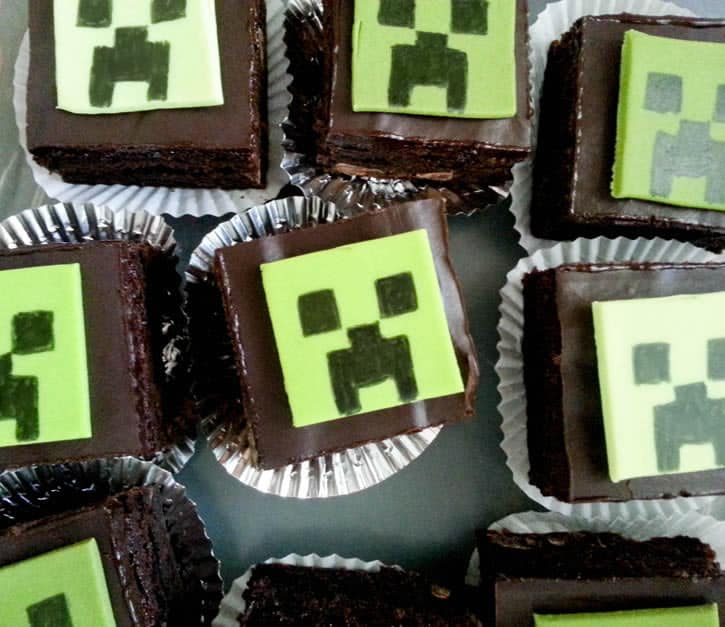 The cake was delicious, the favors a hit, and the extra tiles a huge bonus to carry the theme over to his class. But the candles that became torches on the sides of the cake…the ones I have no photo of? That was the creative element I got most excited about. My son was thrilled with everything. It was a wonderful party! And with these kid birthdays quickly becoming something we’re only looking at in the rearview mirror…the priceless look on his face and the excitement he shows when we bring his vision to life for him… 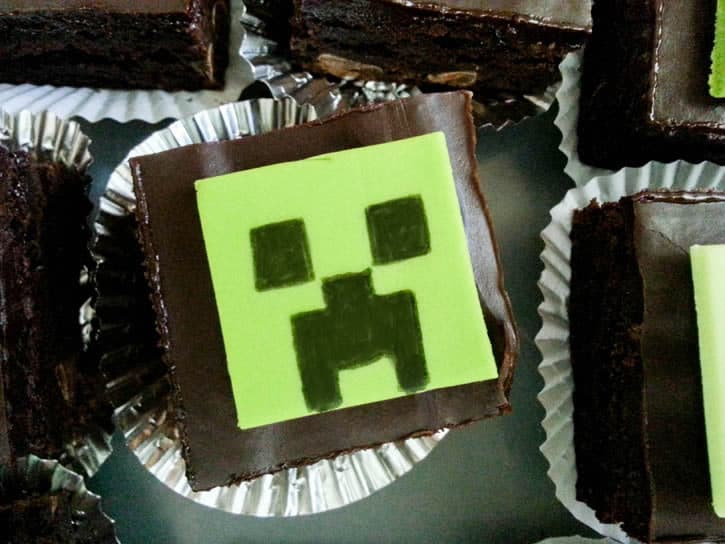 makes every bit of it worth it.