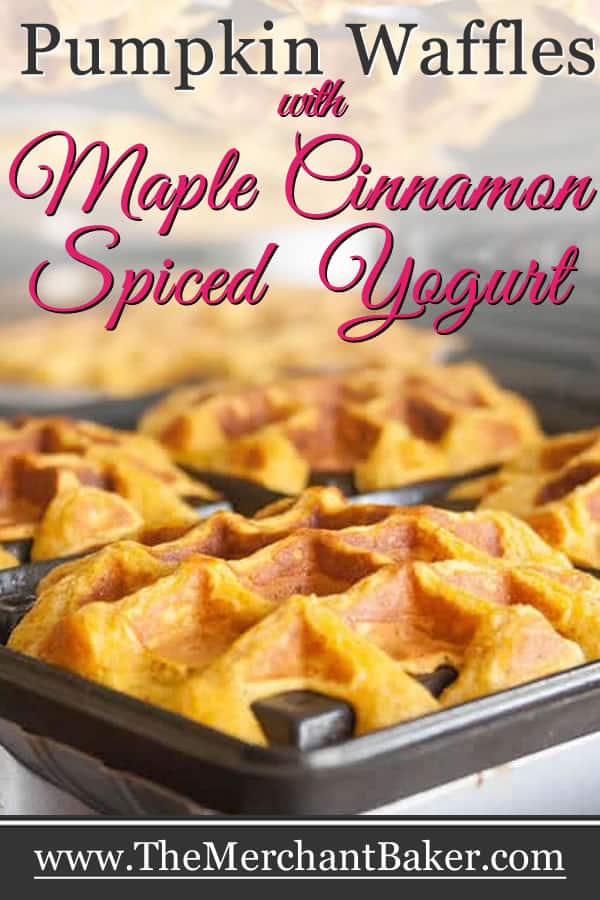 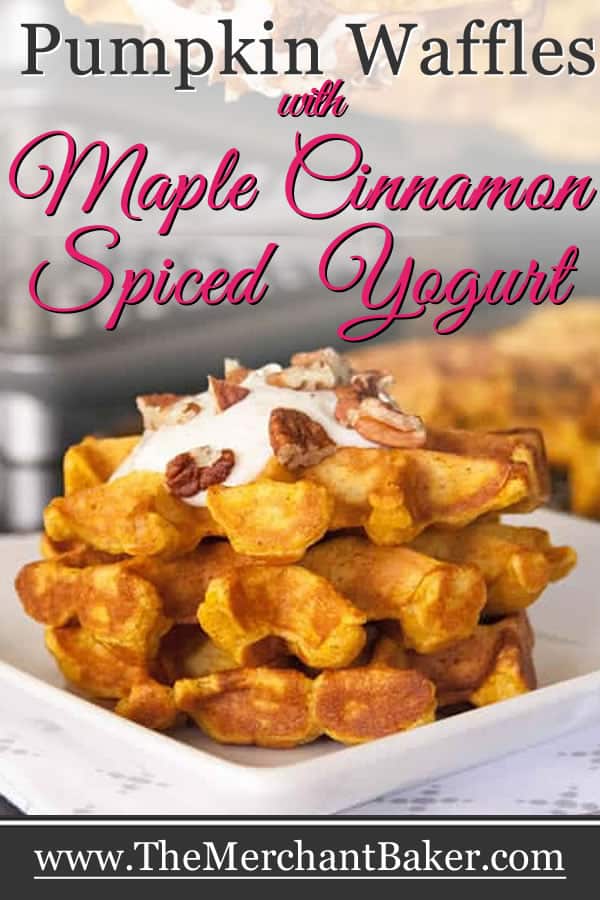 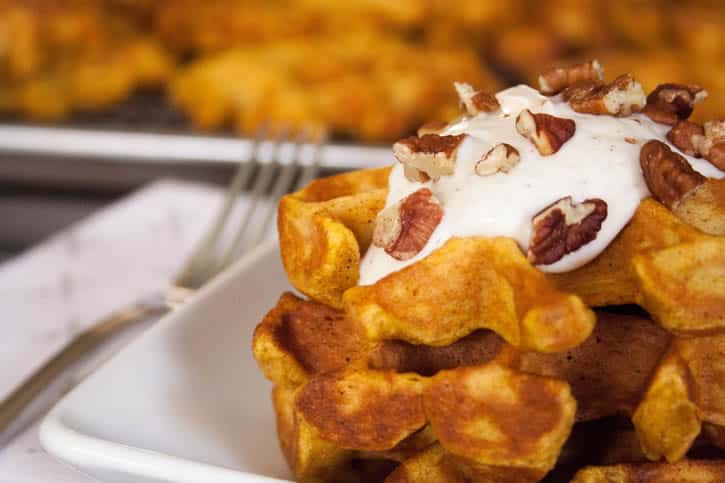 I grew up on homemade waffles.  I loved the aroma coming from the kitchen while they baked. I loved watching the butter melt on them hot from the waffle iron, sprinkling them with powdered sugar or syrup.  Later, when I was out on my own, without a waffle maker or time to make them, homemade waffles could only be obtained in a breakfast restaurant, or maybe one of those Belgian waffle dessert places down at the shore, or if someone with a waffle maker decided to make them for me (not likely.) Then came the creation of “healthy” frozen waffles that were whole grain and full of fiber and protein.  They became a go to breakfast for me, two waffles and some yogurt or cottage cheese and fruit to top it off.  Perfect single girl breakfast. 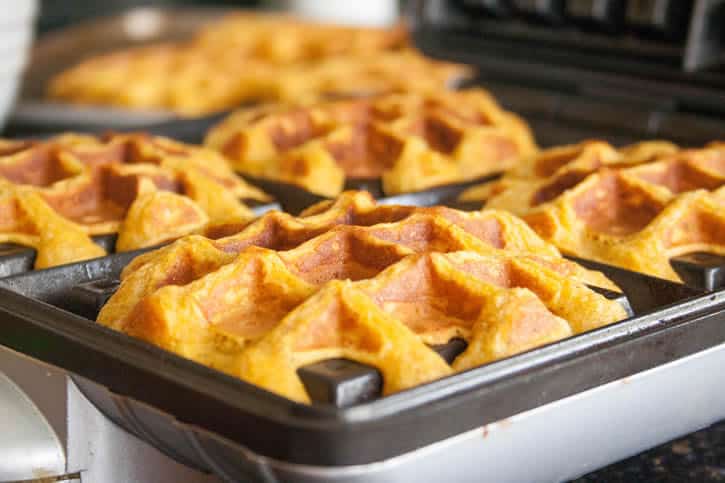 But have you ever had a frozen waffle that could even compare to a fresh homemade one?  I haven’t.  When I had kids, I decided that I wanted to be able to make homemade waffles for them, so I bought a waffle maker.  I love making waffles and even though I make pancakes just as often, waffles are so much easier. There’s no standing at the griddle waiting for the perfect time to flip.  I can just pour the batter in, and once I get the temperature right, just wait for the “ready” beep, to tell me that they’re done. 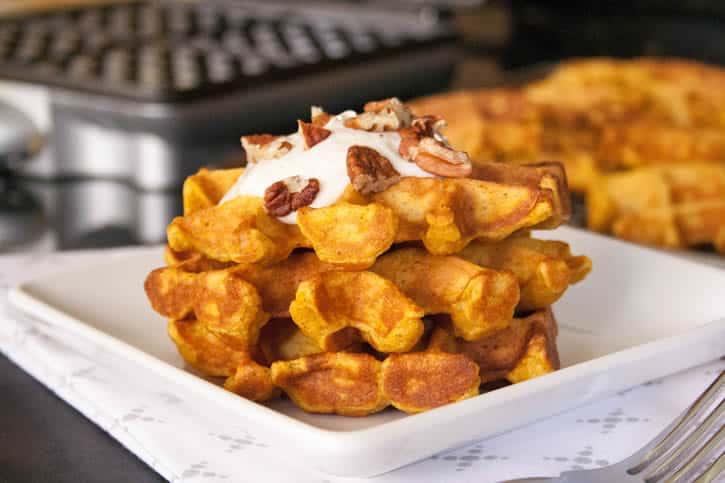 These waffles are part of my family’s love affair with all things pumpkin, like these amazing muffins or this pumpkin pie milk shake.  They are perfectly spiced pumpkin waffles, slightly crispy on the outside, but very tender inside.  Instead of drenching them in butter and syrup, I took a page from my single girl years and topped them with yogurt and a sprinkle of toasted pecans.  The yogurt is flavored with maple syrup and a bit of cinnamon and it is creamy, sweet and delicious on top of these waffles.  Of course, you might be like my husband, who isn’t fond of yogurt.  In that case, you should break out the butter and syrup and go to town.

Another great thing about waffles is that they freeze really well, so I always make large batches and take advantage of that option.  There’s nothing better than being able to have homemade waffles on demand. Pumpkin waffles with maple cinnamon spiced yogurt.  A quick toast on a low setting in your toaster or toaster oven, and you’ve got breakfast!

Now if my kids have frozen waffles, they’re my frozen waffles and they completely trump anything you’d buy from the grocery store.

*Leftover waffles may be stored in the refrigerator, covered, for up to 3 days. Reheat in toaster, toaster oven, or oven.

*Waffles may also be frozen. I layer them with wax paper and freeze them in zipper bags. They reheat beautifully in a toaster oven, (or toaster or regular oven) on low heat. The low heat gives the waffle time to thaw before the outside gets overcooked. Or, you can thaw them overnight in the refrigerator and toast them on a higher heat setting until hot and a little bit crispy.

*I have started using just a quarter cup of batter for my waffles, which doesn't completely fill the well of my Belgian waffle maker. I like the smaller portion. If you fill the well completely, this recipe will yield about 10 waffles.

Perfect for this time of year. Loved them!

Hey these look delicious. I'm going to bookmark them but I thought you'd want to know that the actual recipe is missing from the post now.

Hi Alaena, I don't why the recipe disappeared but it is back where it belongs now :) Thanks for letting me know!

Hello Ramona. These do look delicious. I actually am on search for regular waffles. Could I just leave out the pumpkin purée or would the proportions be totally off? Thank you

Sorry, Ilona, the proportions would be off. The pumpkin adds moisture, so if you left it out, your waffles would be dry :( You could probably leave out the pumpkin and then increase the milk to 1 1/4 or 1 1/2 cups. At some point, I need to get a post up for a good plain waffle. Until then, you can try this substitute.

Every one of these recipes looks amazing and the photos are fantastic!!! I can't keep up with so much going on these days....I need to have some serious kitchen time to get up to speed... :)

I think you're far in the lead, if anyone's keeping track, so I sure wouldn't worry about it. I'm just happy that you've enjoyed the ones you've made! I'll be waiting anxiously for any new reviews.... :)

This looks so delicious. This pregnancy is making me want tons of pumpkin everything. Let's add waffles to the list.

How perfect then, to be pregnant during the height of pumpkin season! Of course, for us, it's always pumpkin time!