See that delicate steam curl wafting up from this pan of deliciousness? 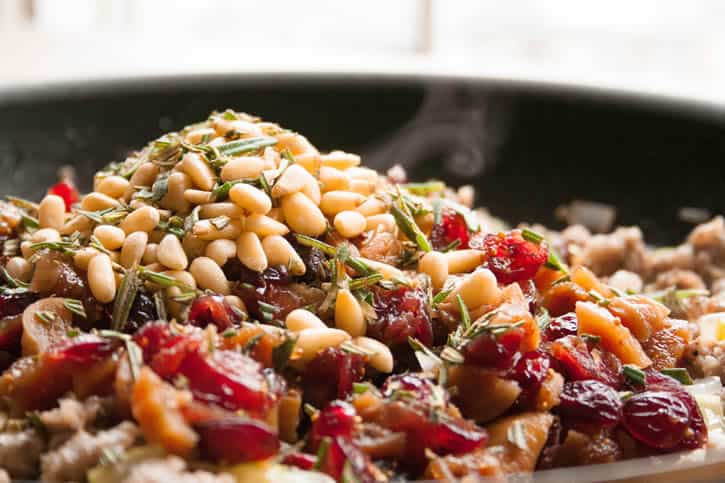 Breathe in…and you’ll almost be able to smell the savory sausage, onions and celery… the sweet cranberries and figs, the toasted pine nuts and the scent of freshly chopped rosemary that the heat of the pan just released into the air.

It smells like Thanksgiving, even though there’s nothing else cooking at the time, which was the case in my kitchen last week when I made this Sausage, Fig & Cranberry Stuffing.

Well, I was also making another classic side to share with you this week, so there were two things cooking that made my kitchen smell amazing. 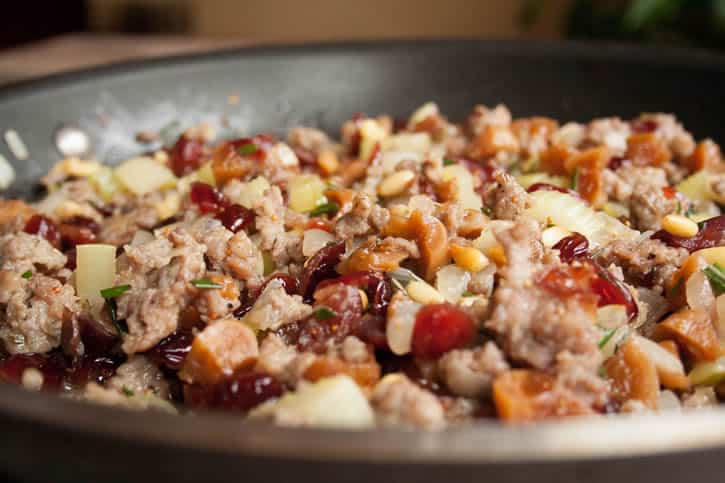 Yep, two weeks before Thanksgiving and we’ve already eaten two of the things that I would normally be making for our own dinner.  And now, the novelty is gone.

Everyone is over the stuffing and very well might be over the other side dish I made.  Except for my son, who wanted to know where the turkey and gravy were…and why were we eating only side dishes for dinner? You’ve got to love that kid.

My daughter has already requested that I limit our Thanksgiving food quantity to keep leftovers at a minimum and now we’ve already had leftovers. You’ve got to love her too.

My ying and yang children. Yes, these are the issues of a new food blogger who is going through her first blogger Thanksgiving.

Clearly, I need to plan to make holiday food for the blog months in advance (July?), not just a couple of weeks.  I suppose I’ll just make some other favorites that day.

Thankfully, I only made two dishes last week.  Otherwise, I’d be planning a completely new menu. That’s okay. It’s always good to mix it up a little.  Now let’s get back to you…and this stuffing…. 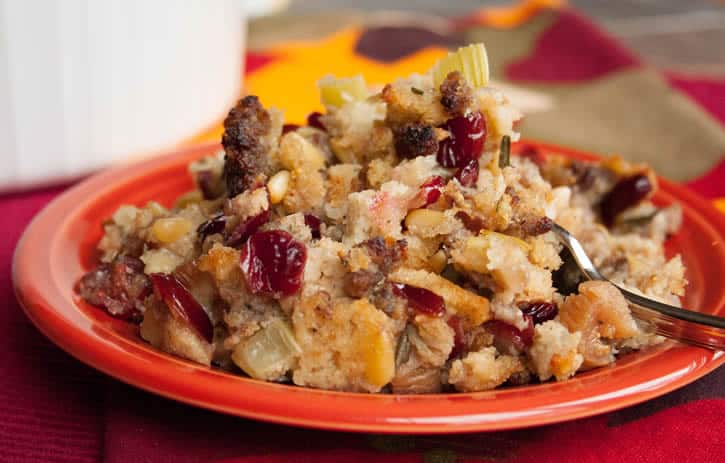 You didn’t eat partial Thanksgiving last week, so you are good to go.  If you’d like to try something new, this is one of my favorite stuffing recipes; I’ve made it for the past few years.

I first saw it on The Brown Eyed Baker.  It is so good because, as you know from the kale post, I love the mix of sweet and savory.

I actually love all kinds of stuffing, with meat, without, traditional, trendy, with nuts, without, in the bird, on the side.  It’s all good…unless it’s dry.  Then I hate it.

My theory on good stuffing is that it should not need gravy to make it taste good, just like a good cake should not absolutely need the frosting. Good things should be able to stand alone and then be complemented or enhanced by other food “accessories.”

This is not dry stuffing. It is quite moist, but baking makes for some lovely toasty bits on top. And, it’s ridiculously full of flavor.  The sausage gives it a savory heartiness.

This recipe is definitely weighted to the savory side, only giving way to sweetness when you happen upon a tender fig or juicy cranberry. 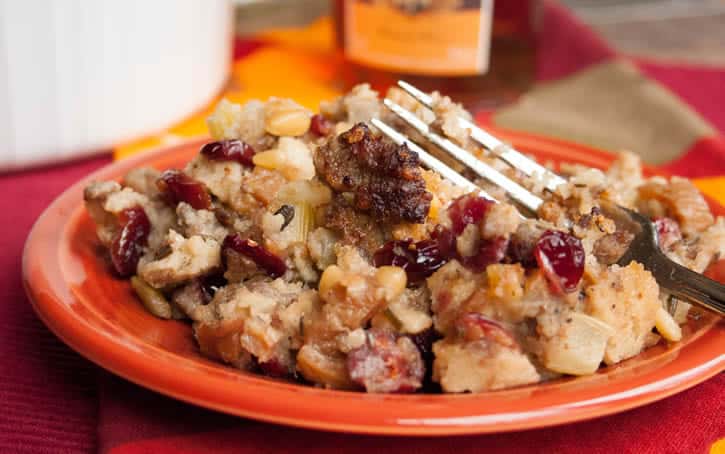 So breathe in and pretend to smell the wonderfulness that is this Sausage, Fig & Cranberry Stuffing.  Or better yet, plan to make it, because that’s the only way that amazing aroma is going to show up in your kitchen. 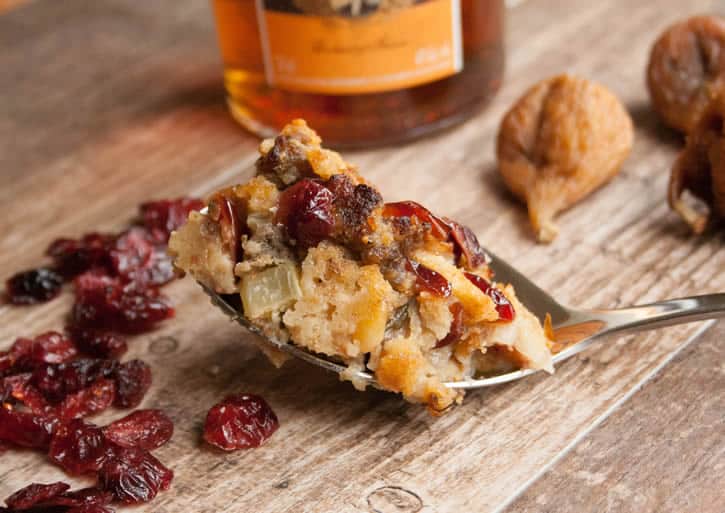 What kind of stuffing (or dressing) will you be making this year?

*This is a moist stuffing, so you definitely want to bake it in a 13 x 9 or other more shallow casserole dish as opposed to a deep dish casserole so you can get enough of that crusty top. If you like a less moist stuffing, you can reduce the chicken stock to your preference, remembering that some of that moisture will evaporate while cooking.

*For this post, I used a stuffing mix that was more like crumbles than cubes. I actually prefer larger cubes, to stand up to all the other ingredients and liquid.

*If you don't have or want to use Calvados or other brandy, you can substitute wine, apple juice or water.

*If you don't use low sodium chicken broth, you may want to back down on the teaspoon of salt. Remember, a teaspoon of kosher salt is less salty than a teaspoon of regular table salt, because the granules are larger and therefore, there are less of those granules in a teaspoon than for a finer grain salt. Taste your mixture before seasoning, before you add in the raw egg, and adjust accordingly.

Recipe from The Brown Eyed Baker

Mike, I'm sorry to hear that you found the flavor to be flat. I've always found this to be a very flavorful stuffing. It's possible that you used plain bread stuffing instead of herb seasoned bread stuffing. Between the herb seasoned stuffing and the flavorful pork sausage, not to mention the aromatics, it's hard to imagine that the flavor would be bland. The temperature is written as 325, so I'm not sure I understand your comment to lower it to 350. I think you'd probably be okay with either temperature, you'd just have to check for doneness sooner at 350 than at 325. As far as the rosemary, you are correct. There was a mistake in the recipe which has now been fixed. I apologize for that. In any case, I'm sorry this one didn't work out for you and appreciate the time you took to come back and comment.

Had this stuffing this year made by a friend it was amazing!! Will definitely make it next year for Thanksgiving. ??

Jeanne, I'm excited to hear that you enjoyed it. I really love the balance of sweet and savory flavors. There's a special place in my heart for a traditional stuffing, but it's always fun to switch it up and try new things :)

Have you tried making stuffing in the form of crispy pork bonbons - this year for Christmas I made shredded pork belly mixed with cranberries and caramelised onions and then coated them in panko before crisping them up - SO good. Even better with ham hocks. Here's the recipe if you're interested, www.timedeating.co.uk/fully-loaded-shredded-pork-bonbons

Never made a pork bon bon, but sweet and salty combinations always sounds good to me. Thanks for sharing!

I remember this stuffing from the amazing Thanksgiving meal you prepared last year. It was incredible! I'll definitely be saving this recipe for future reference.

Yep, this is the one! Always a favorite!