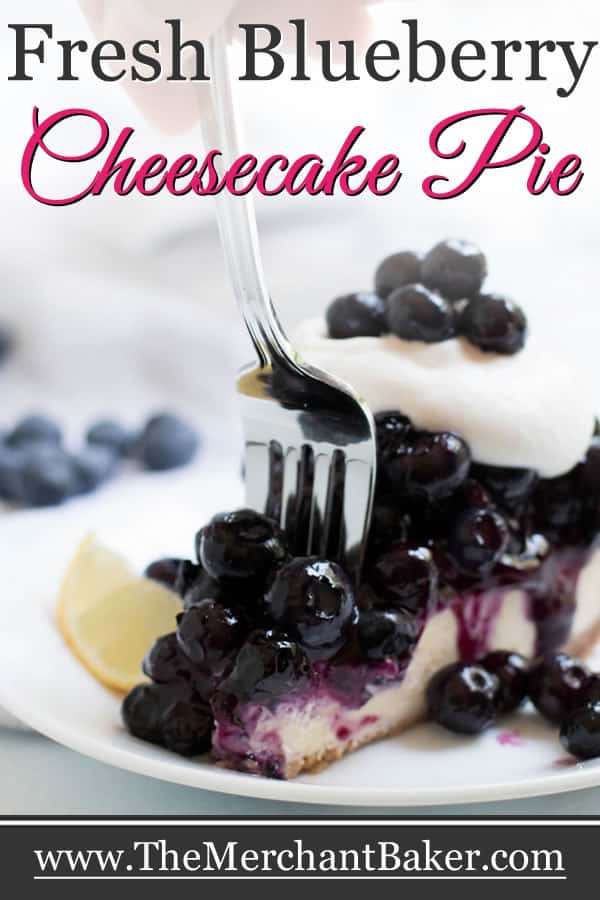 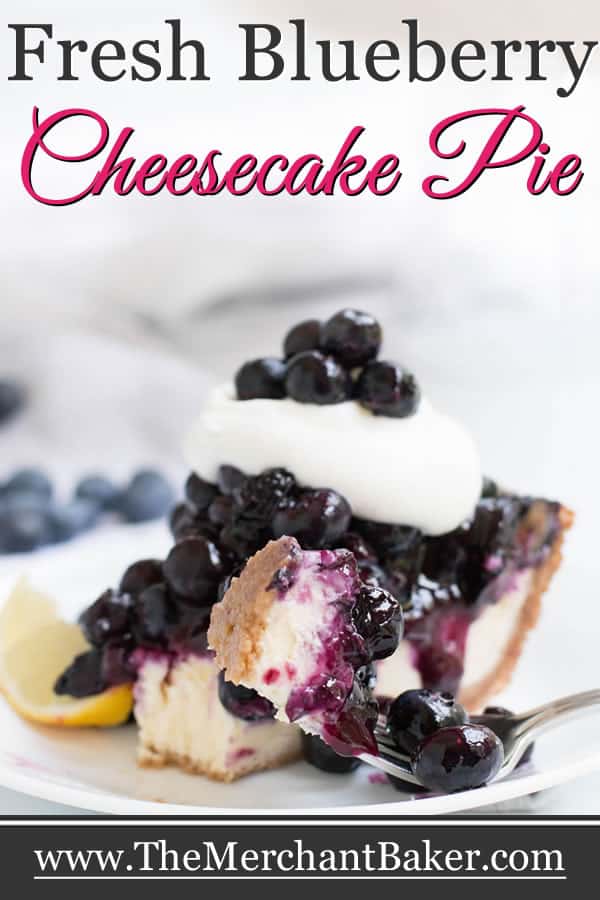 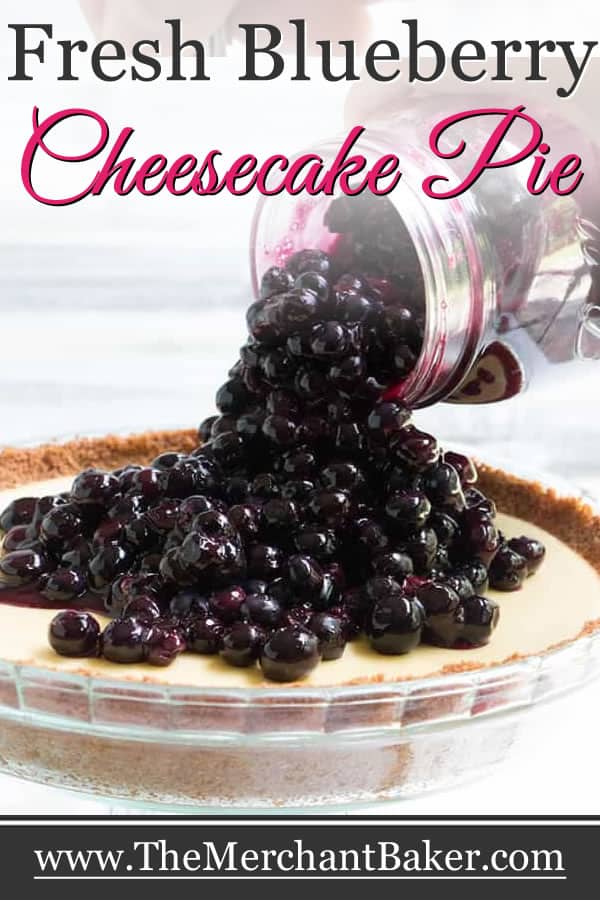 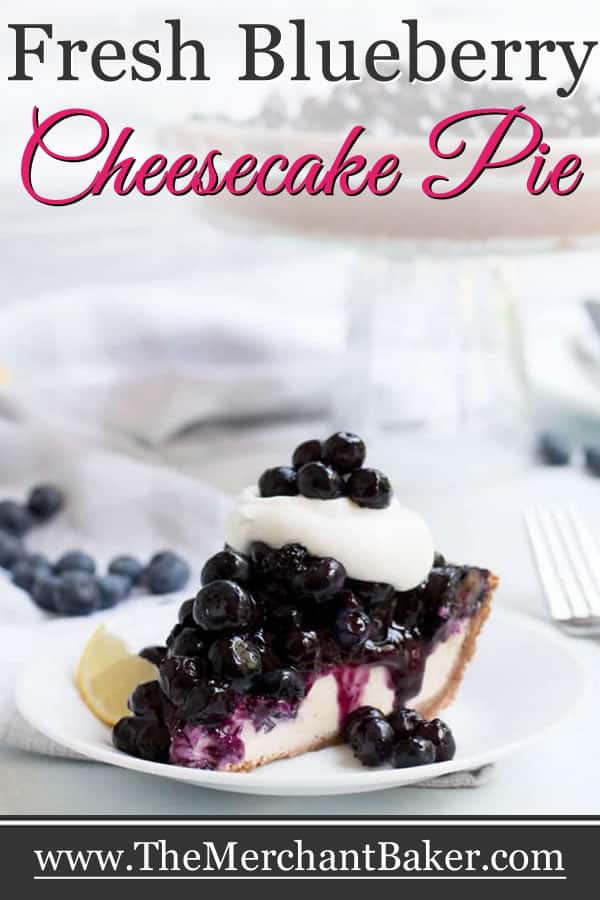 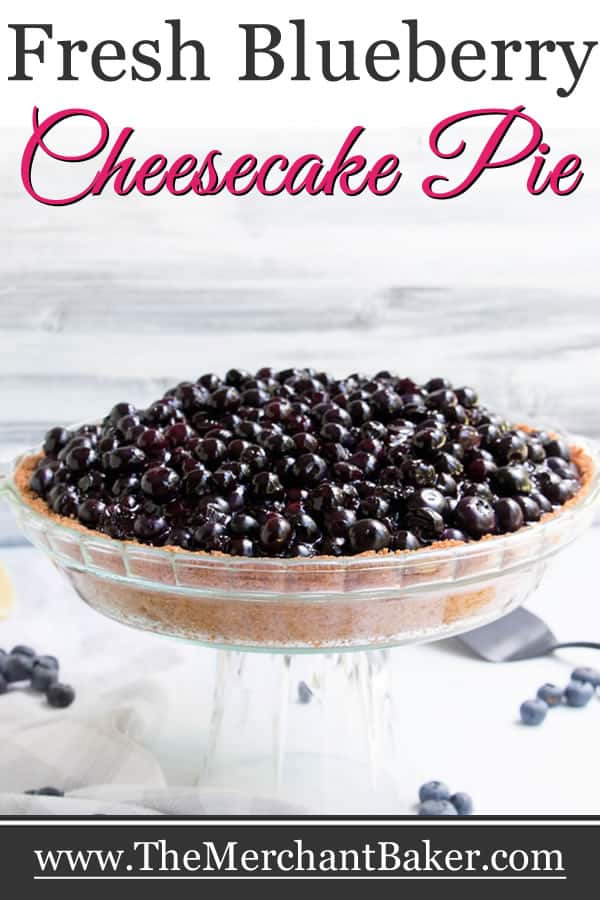 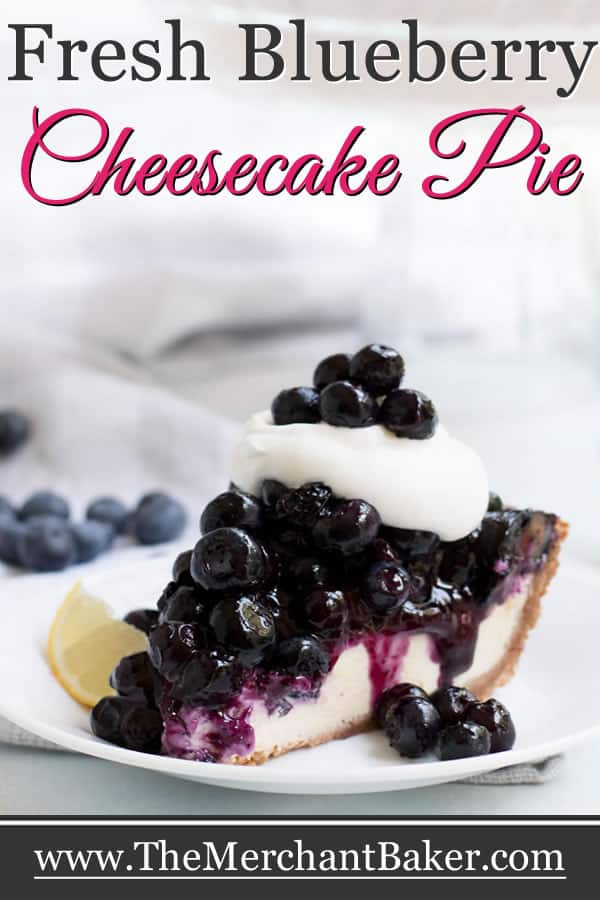 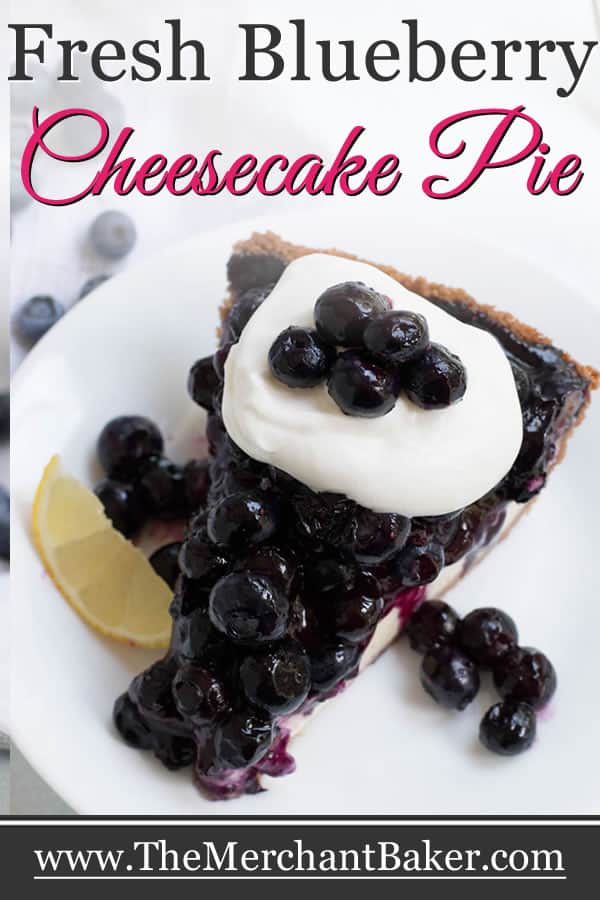 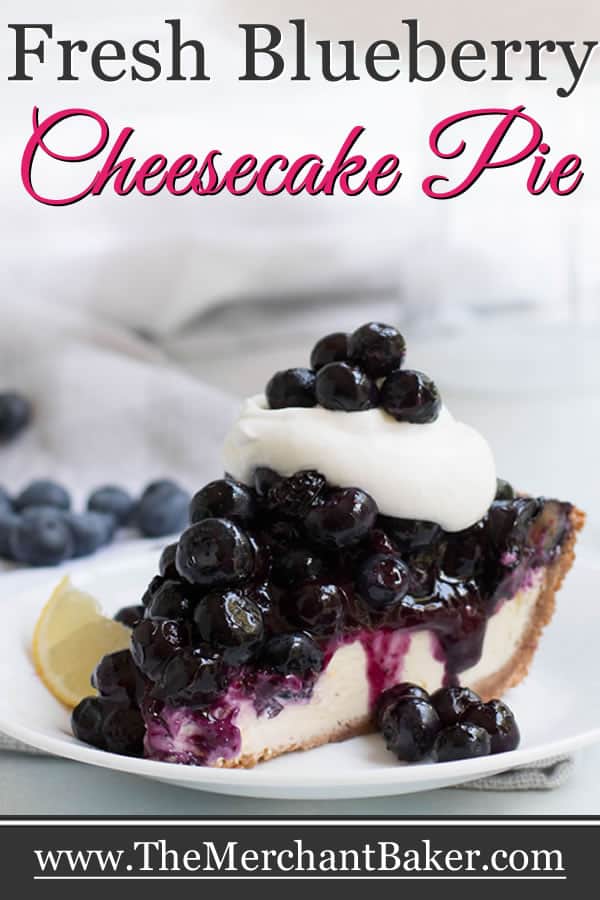 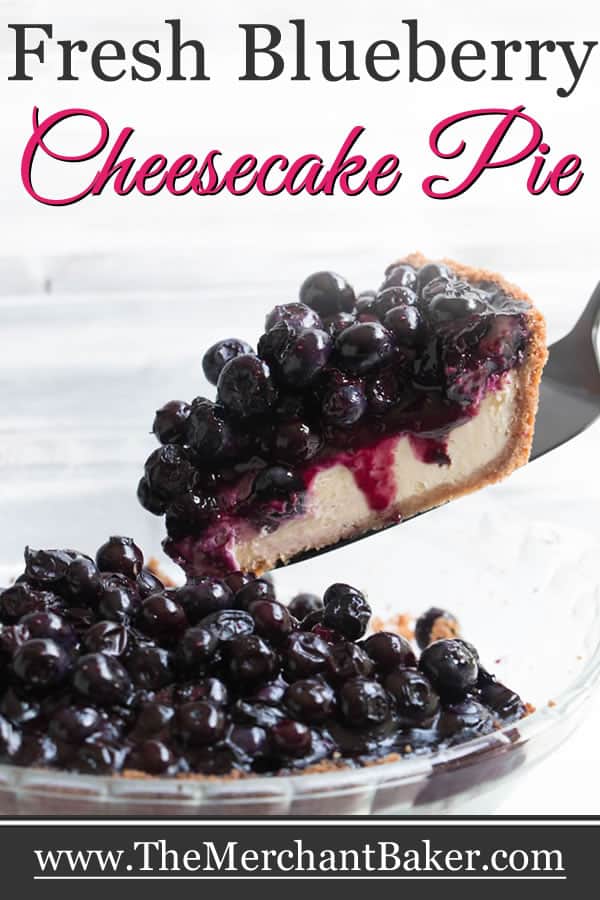 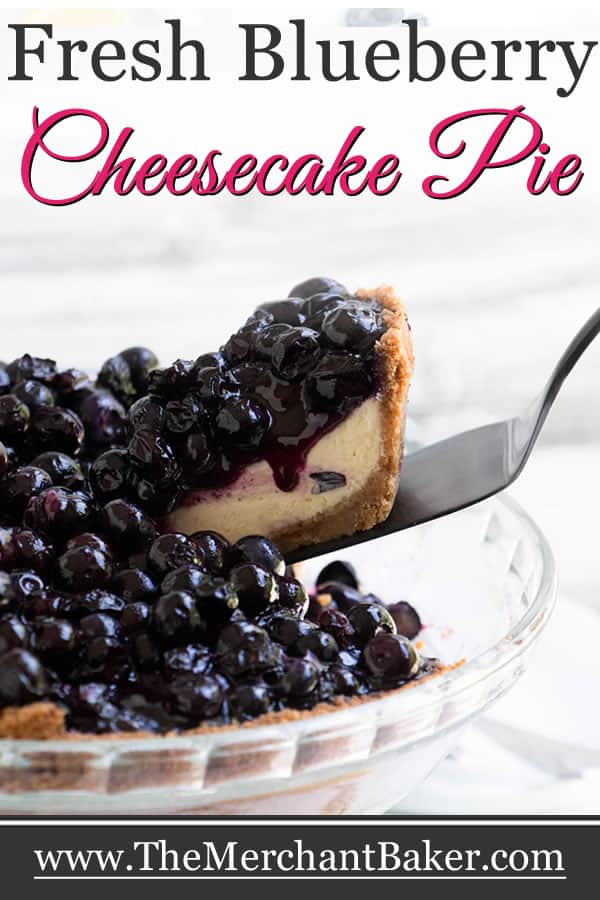 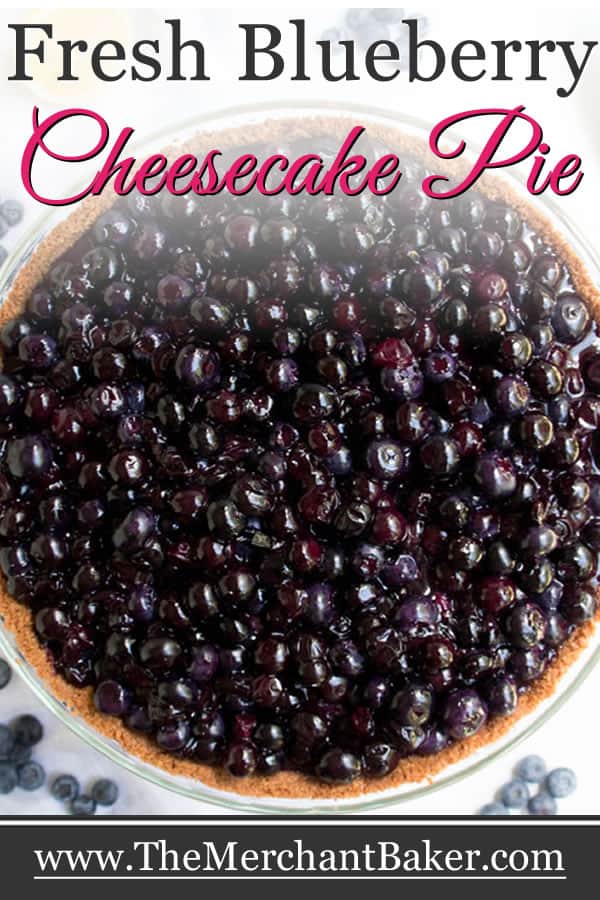 This Fresh Blueberry Cheesecake Pie is like getting two pies in one. It starts with creamy classic cheesecake base that’s baked on a graham and vanilla wafer crust. Then, the baked cheesecake is topped with a whole pie’s worth of homemade blueberry pie filling!

It makes perfect sense to me especially because, well, just look at that generous mountain of the most delicious Fresh Blueberry Pie Filling topping the creamy cheesecake! 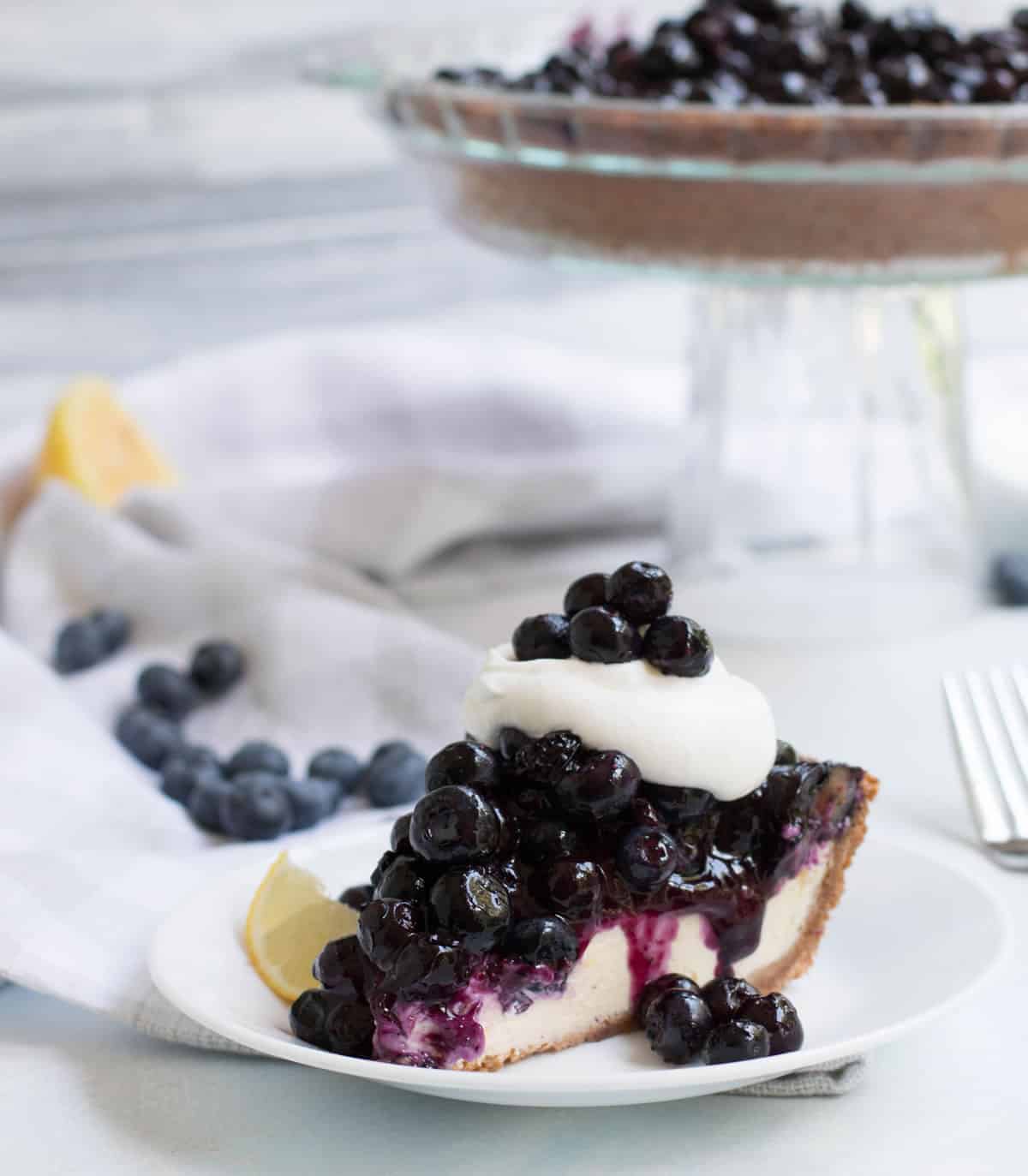 But then there was the whole thing about making a pie crust. I wasn’t up for it. It might have simply been a hot day and I didn’t want to turn on the oven.

It certainly wasn’t because I don’t have a great post about how to make an Easy All Butter Pie Crust…because I do. I even have a video to go with it showing you how super easy it is! 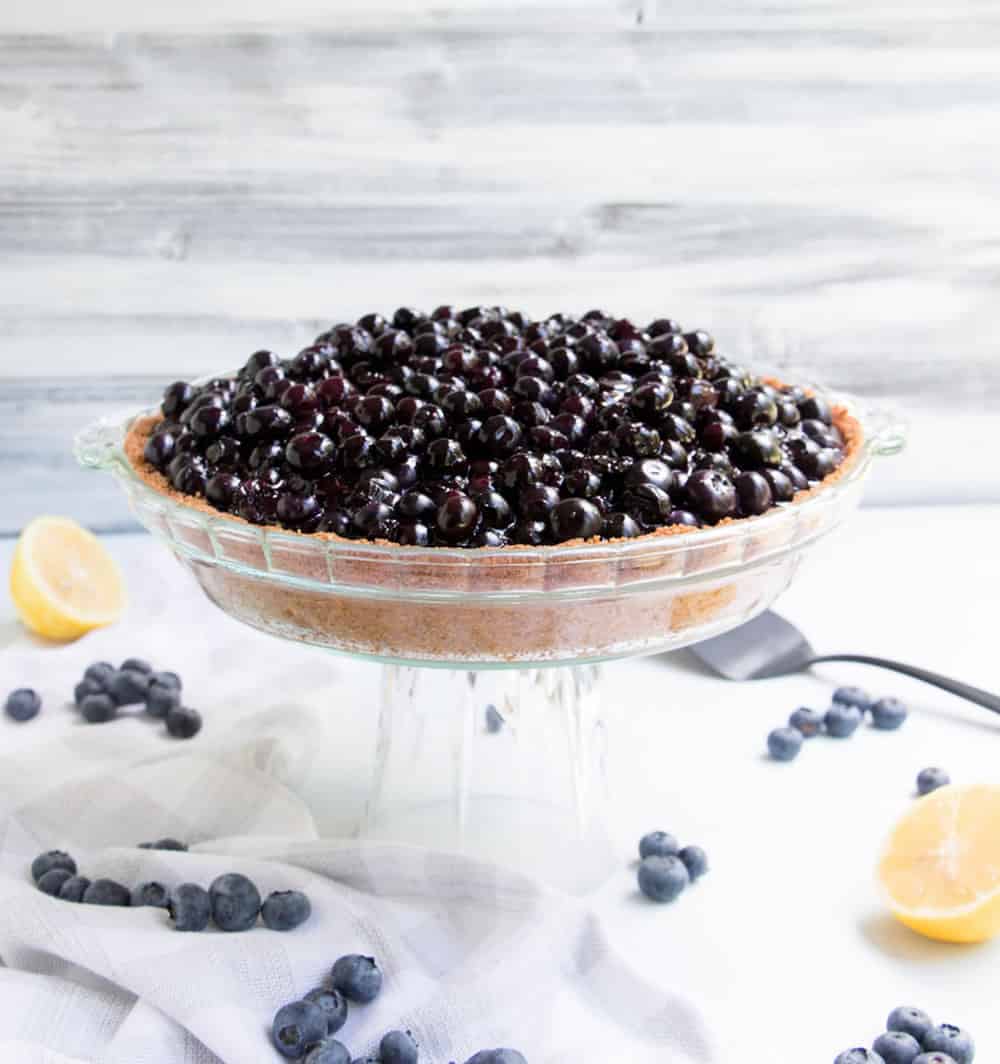 Nope, it wasn’t about making pie crust. It was a blind baking thing. Blind baking is when you bake the crust without the filling in it. You fully bake the empty crust so that you can fill it with something that’s not going to be baked, like a chocolate cream pie.

Or, you can partially bake it before filling it and finishing the baking process as some do with custard type pies. It helps guard against a soggy crust. I don’t follow that for my own pumpkin pie. I just put it all in and let it bake.

In order not to have the crust puff up without any filling in it, it needs to be weighted down with something and docked etc, etc, etc.

Since I was making a Fresh Blueberry Pie Filling, I would have to blind bake the crust if I wanted a blueberry pie. And then, I’d have to write a post about how to blind bake a crust, when I really, really, just wanted to talk about the blueberries.

What can I say? I absolutely want to do a whole blind baking post; I just didn’t want to do it today. 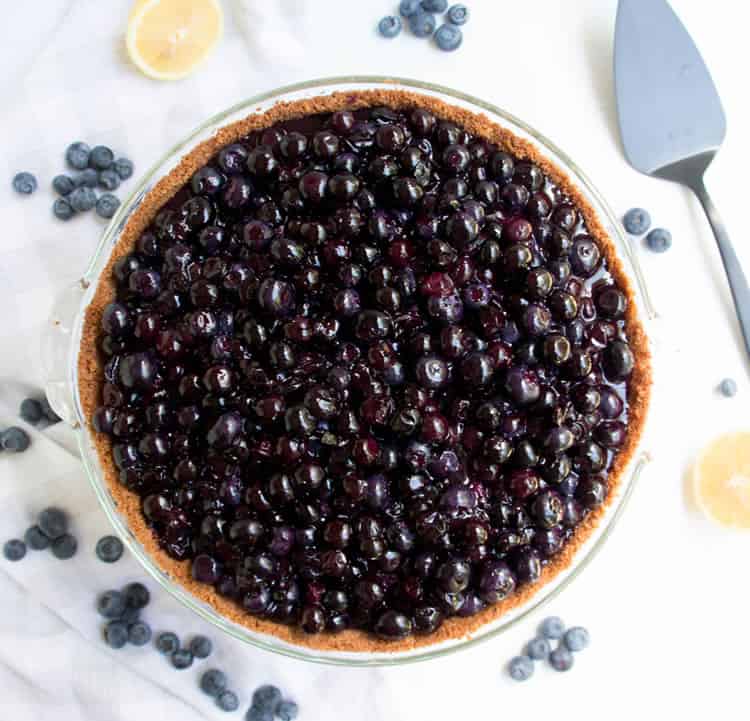 So, I thought about all of the fun, non-classic pie ways I could use the blueberry pie filling and started to develop recipes for my ideas. And somehow, all of those fun ideas got pushed aside for this simple Fresh Blueberry Cheesecake Pie.

What did that mean for me?

Well, I was definitely going to have to turn the oven on. Strike one.

I was definitely going to have to blind bake a crust, even though it was a cookie crust, not a pastry crust. Strike two.

And I was still going to end up with pie. Strike three!

Funny, right? It all came full circle. What can I tell you? The simple truth is that I had cream cheese on hand and I was craving cheesecake. 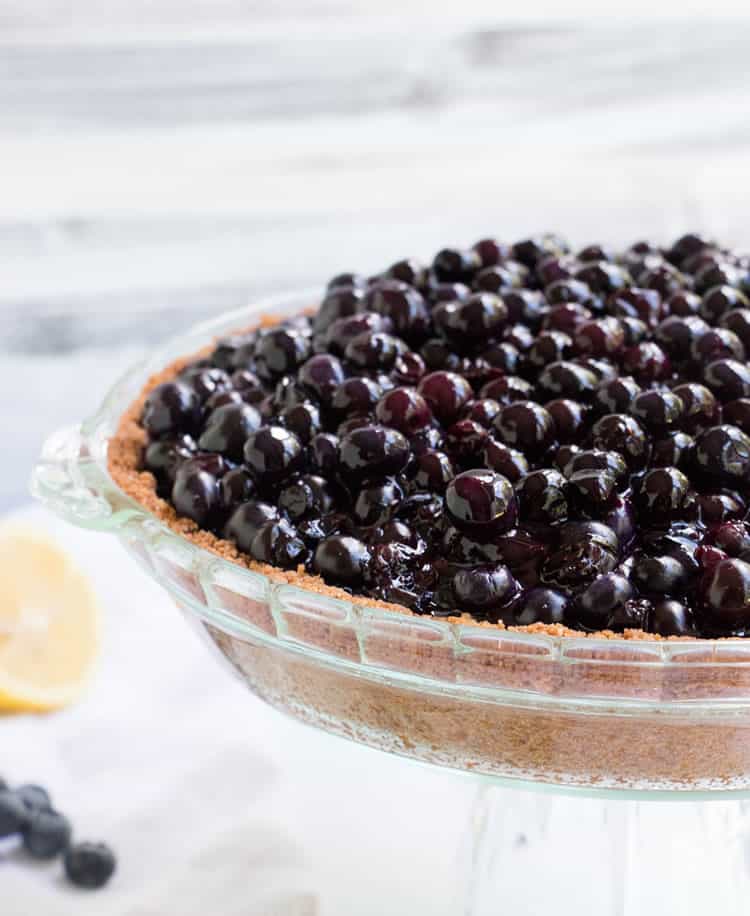 Then, all I could think of was how amazing that cheesecake would taste if I smothered it with all of those berries. Yep, instead of making blueberry pie, I took a whole pie’s worth of blueberry filling and piled it on top of a cheesecake!

That’s why this isn’t called, “Cheesecake Pie Topped with Blueberries.” Nope. You pretty much get two pies, here. A cheesecake pie and a blueberry pie. A double decker pie, if you will.

It’s not fancy. It’s not novel, save for the extra generous portion of pie filling on top. It’s just a simply delicious dessert for blueberry pie and cheesecake lovers alike. 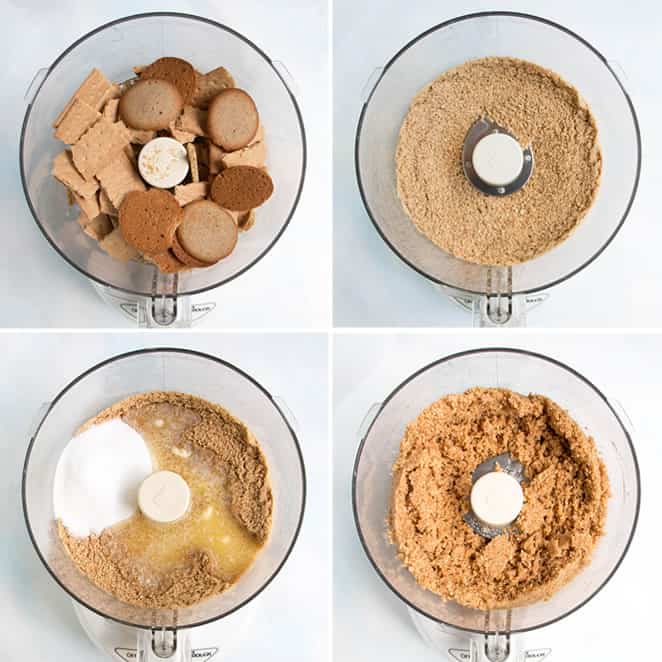 For the crust, I decided to combine graham cracker and vanilla wafer crumbs. I love both crusts individually, but I wanted that hit of vanilla cookie flavor in this graham cracker crust, so I just added them into the mix. (I suppose that’s a little novel, right?)

I used a food processor to make it easy, but feel free to throw them in a zip top bag and do it by hand. With the food processor, I just process until I get fine crumbs.

Then, the melted butter and sugar go into the mix. A few pulses later and we have our crust mixture.

Into the pan it goes. Now look at how perfect that crust looks. How do I do it? 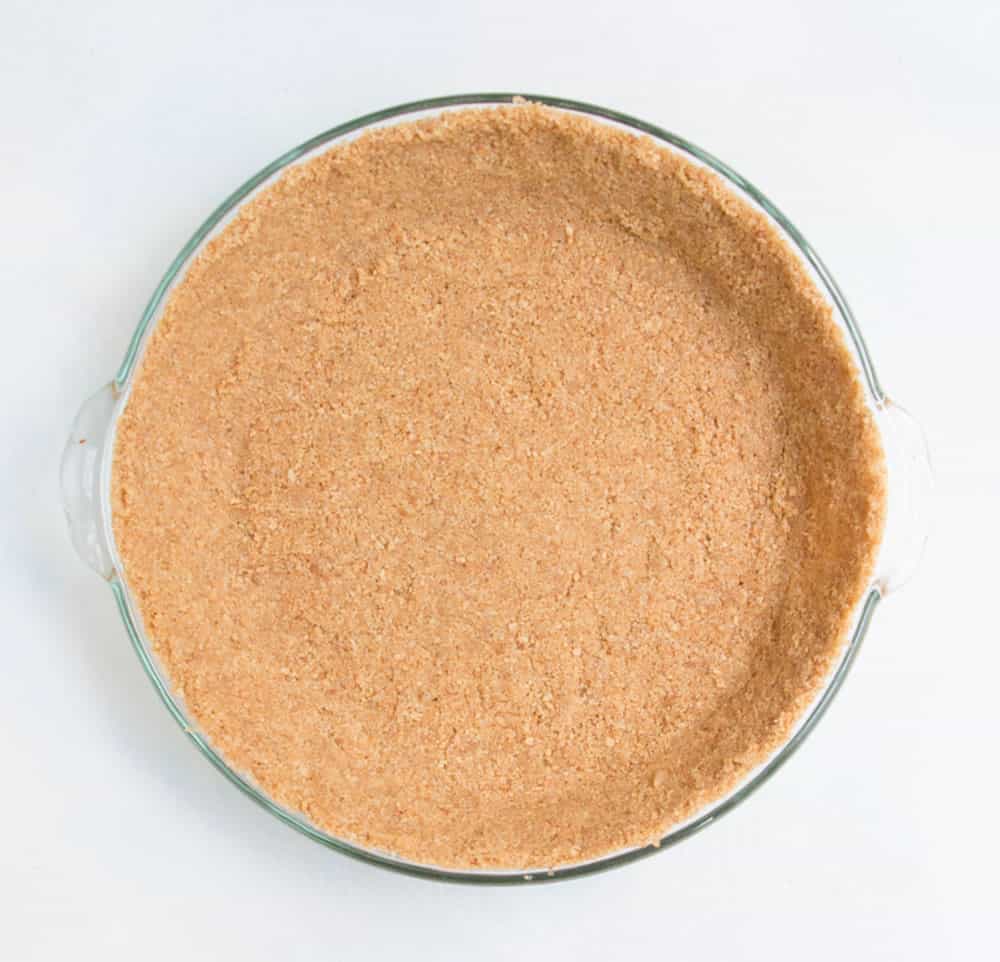 Before I press one single crumb into place, I spread the crumb mixture evenly around the pan, leaving a thick border of crumbs around the edges and a thick layer on the bottom.

Then, I use the side of a measuring cup to gently press that thick crumb border against the sides, gathering up more crumbs if I happen to be short on any part of the edge.

Once I’m happy with the sides, I make sure the rest of the unpressed crumbs are still evenly distributed around the bottom of the pan.

Then, I use the bottom of the measuring cup to firmly press the bottom crumbs into place. That’s it. You can go back with your hands and press any strays or clean up any edges that need it. Done and done.

Bake it for 8 minutes to set it. Yep, that’s how you blind bake a graham crust. Easy peasy. 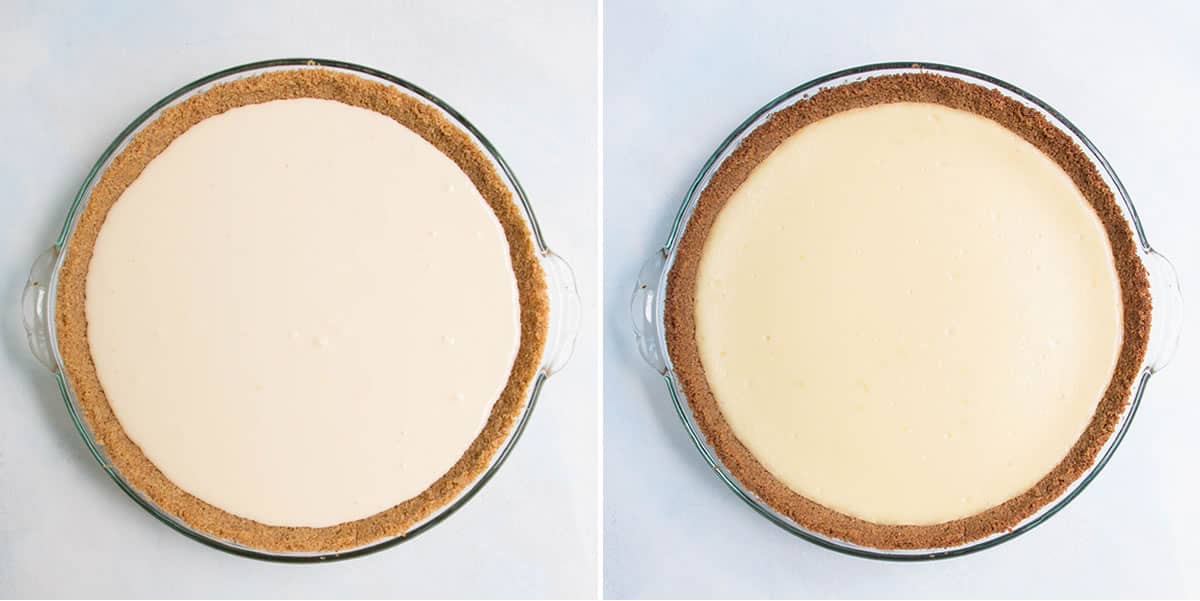 Before and after baking. Only a few bubbles and no cracks!

Let it cool, then work on your filling. You can check out my Chocolate Chip Cherry Cheesecake for additional tips on making a cheesecake, but here are some of the basics…

Room temperature ingredients. Plan ahead and make it happen. At least for the cream cheese. I don’t have a short cut that I really love for that one. I prefer to let it come to room temp on its own.

For eggs? The short cut is to simply place them in a bowl of warm water for about 10 minutes or so.

The sour cream? You can stick it in the microwave for a few seconds, stir and repeat as necessary. Just don’t let it get warm. Room temp is what we’re looking for and that happens fast with this small amount of sour cream. 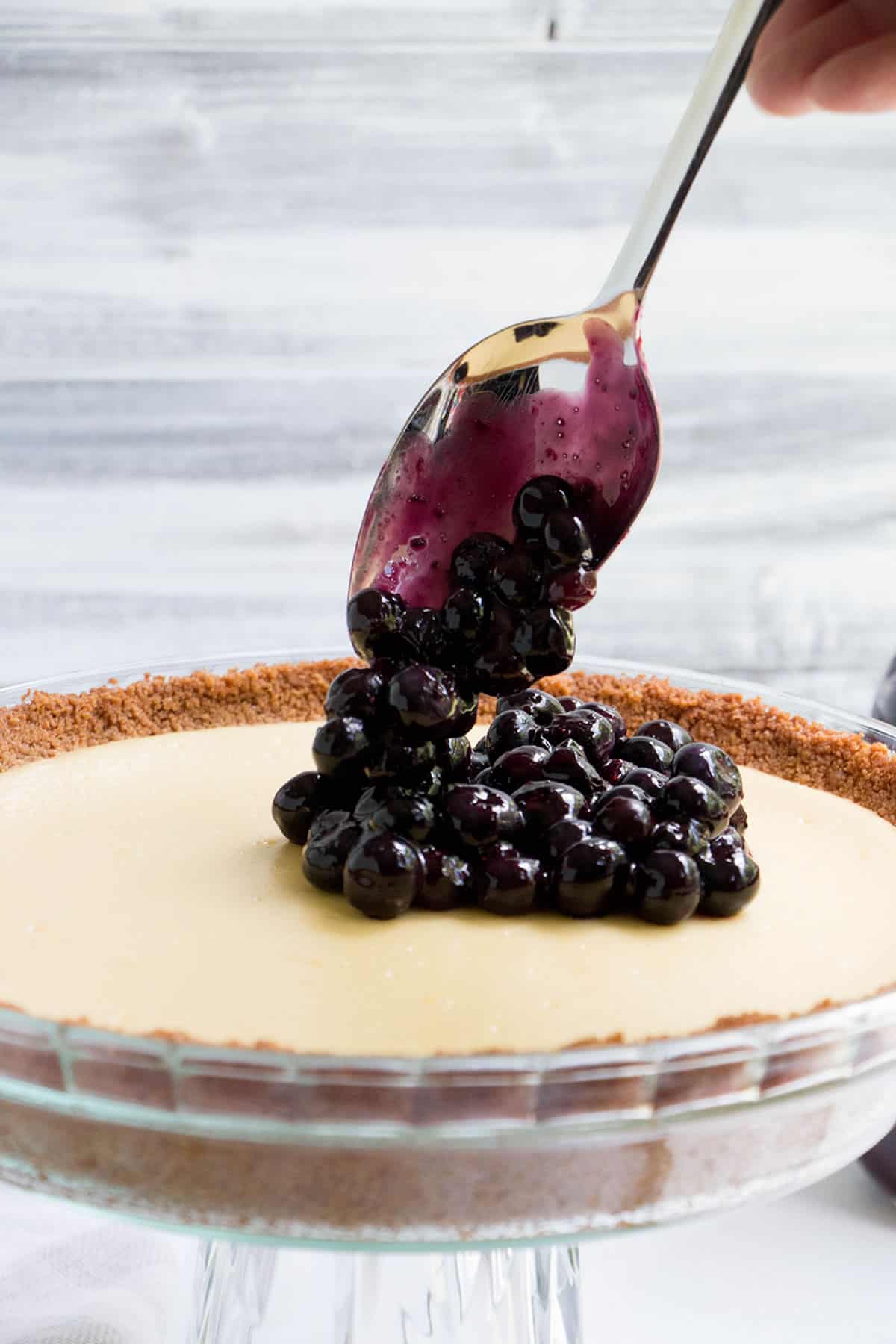 Then, when you’re combining the ingredients, try not to go to town with your electric mixer. We’re not making whipped cream, so we don’t want to whip up a lot of air into the mixture.

Air means bubbles. We don’t need a million fluffy bubbles floating around our smooth and creamy cheesecake. But we do want our mixture thoroughly combined, so don’t let the warning scare you too much. Make sure you mix it completely.

That being said, I usually end up with at least a few bubbles. I’ll drag a tooth pick around the filling to pop most of them and then not worry about the rest. We’re gonna cover that baby with a ton a berries anyway, so it’s all good.

Gentle cooling helps with preventing any cracks that might want to invade the top of your cheesecake. For that, you’ll simply turn off the oven once the cheesecake is baked. Then, you’ll open the door wide and let the cheesecake hang out in the oven for an hour before you remove it. 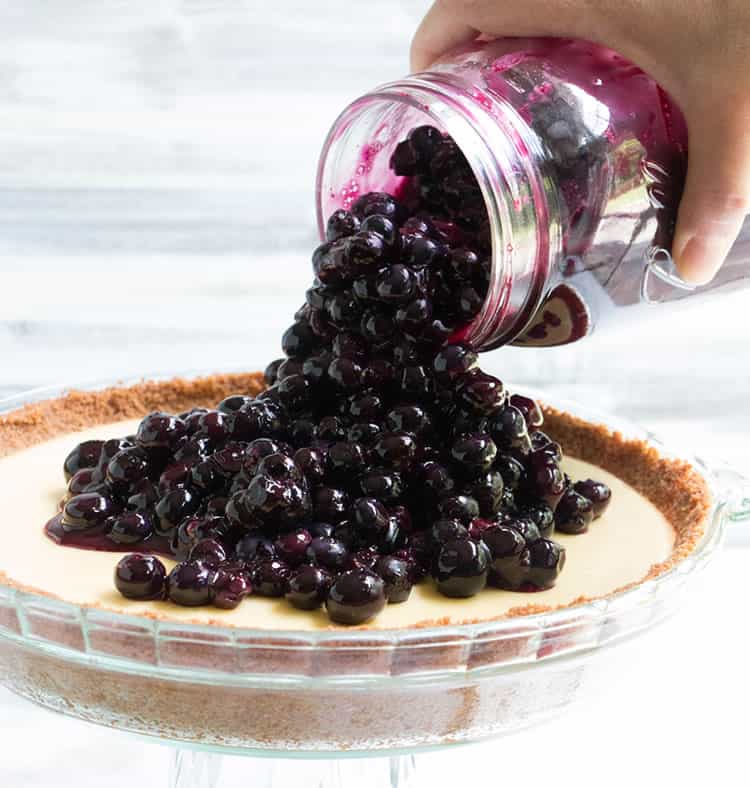 Of course, should you end up with a crack in the top of your cheesecake, don’t fret. Like I said, we’ve got a pie’s worth of blueberries ready to fill any canyons. No one will ever know.

Now, the thing that’s maddening about cheesecake is the cooling and chilling time. You’ve got to let it cool to room temperature and then it really should be chilled for several hours or overnight. You’ve got to plan ahead for cheesecake.

The Fresh Blueberry Pie Filling also benefits from some serious chill time. We want it to slice into some nice, fairly clean layers without filling spilling all over the place. So I like the chill time to happen on top of the cheesecake. 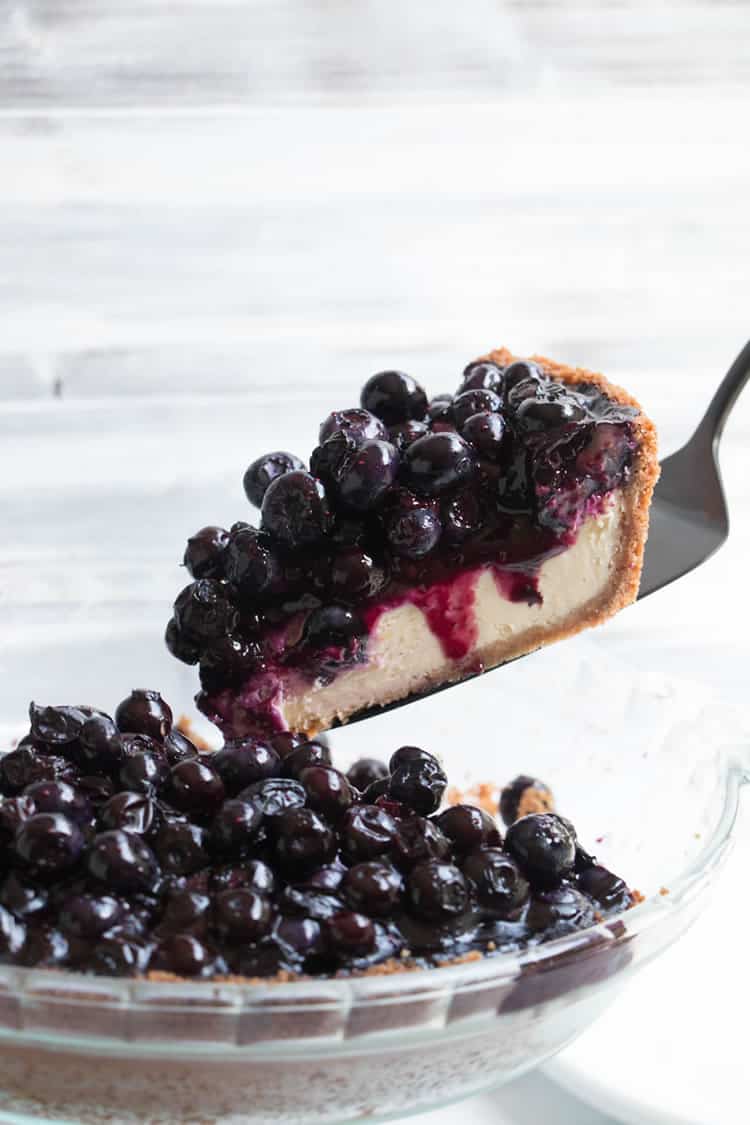 Then, the whole darn thing goes into the fridge to chill.

Of course, if you’re not trying to time the cooling process of the pie and the filling so that they go into the fridge together, you can totally make the cheesecake first and make the filling the next day.

Once it’s all chilled, you’ll cut your first slice. That first slice might have blueberries streaming down all over the place.

For the first piece I cut, the cheesecake layer was completely and totally hidden by the berries and their syrup. It was kind of over the top glorious. 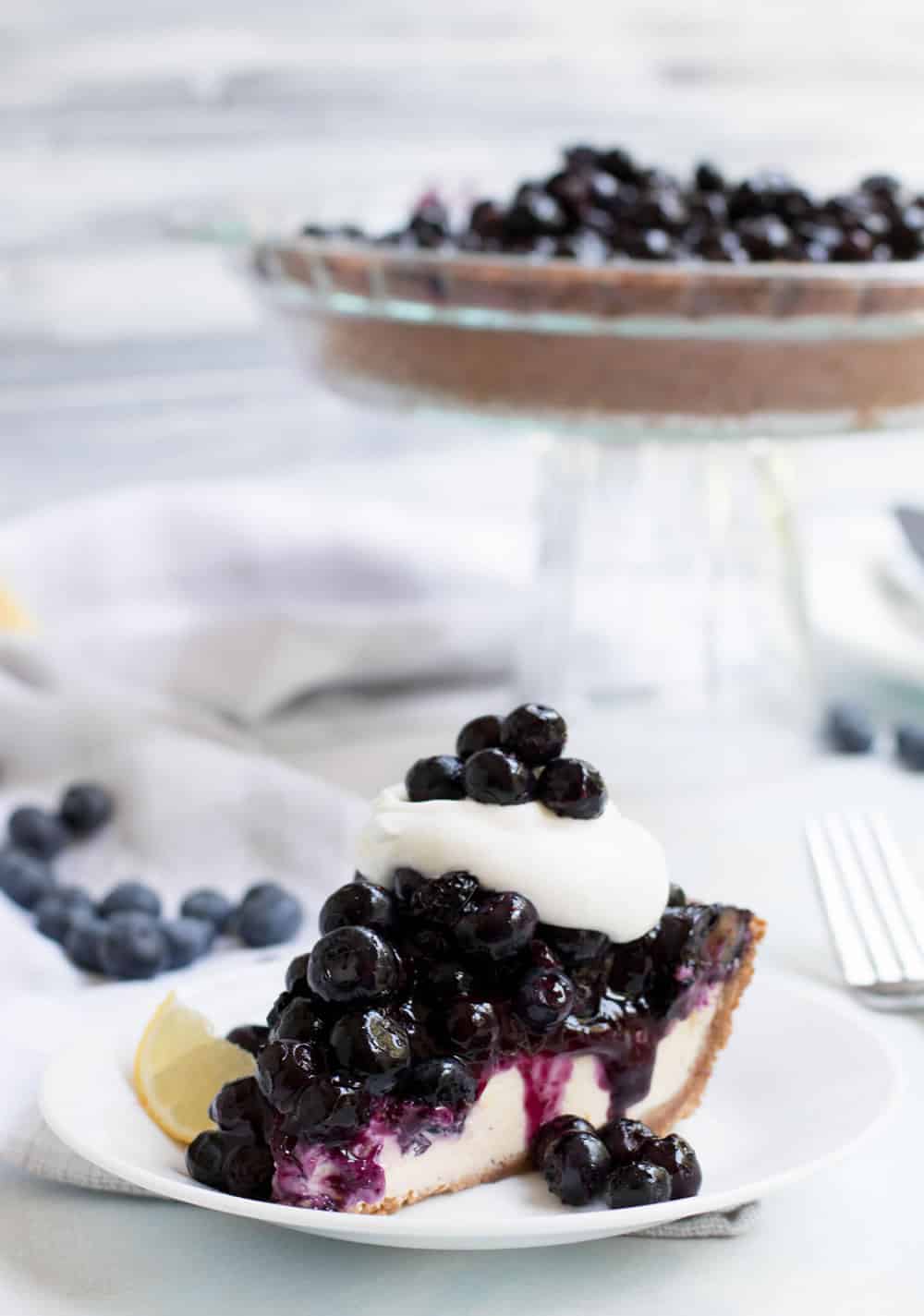 It wasn’t necessarily the best for photos, though. In real life, you blueberry lovers might want to call dibs on that first piece.

In fact, grab a spoon and claim any of those berries that were lost to the pan, and that rightfully “belong” to your gorgeously messy slice :) You’re going to want every last one.

After that rebel first slice, the rest come out rather orderly. You know, with that nice clean layer of creamy cheesecake showing and bits and bobs of blueberry filling tumbling randomly over the sides. Ahh, it’s a beautiful thing. Isn’t it? 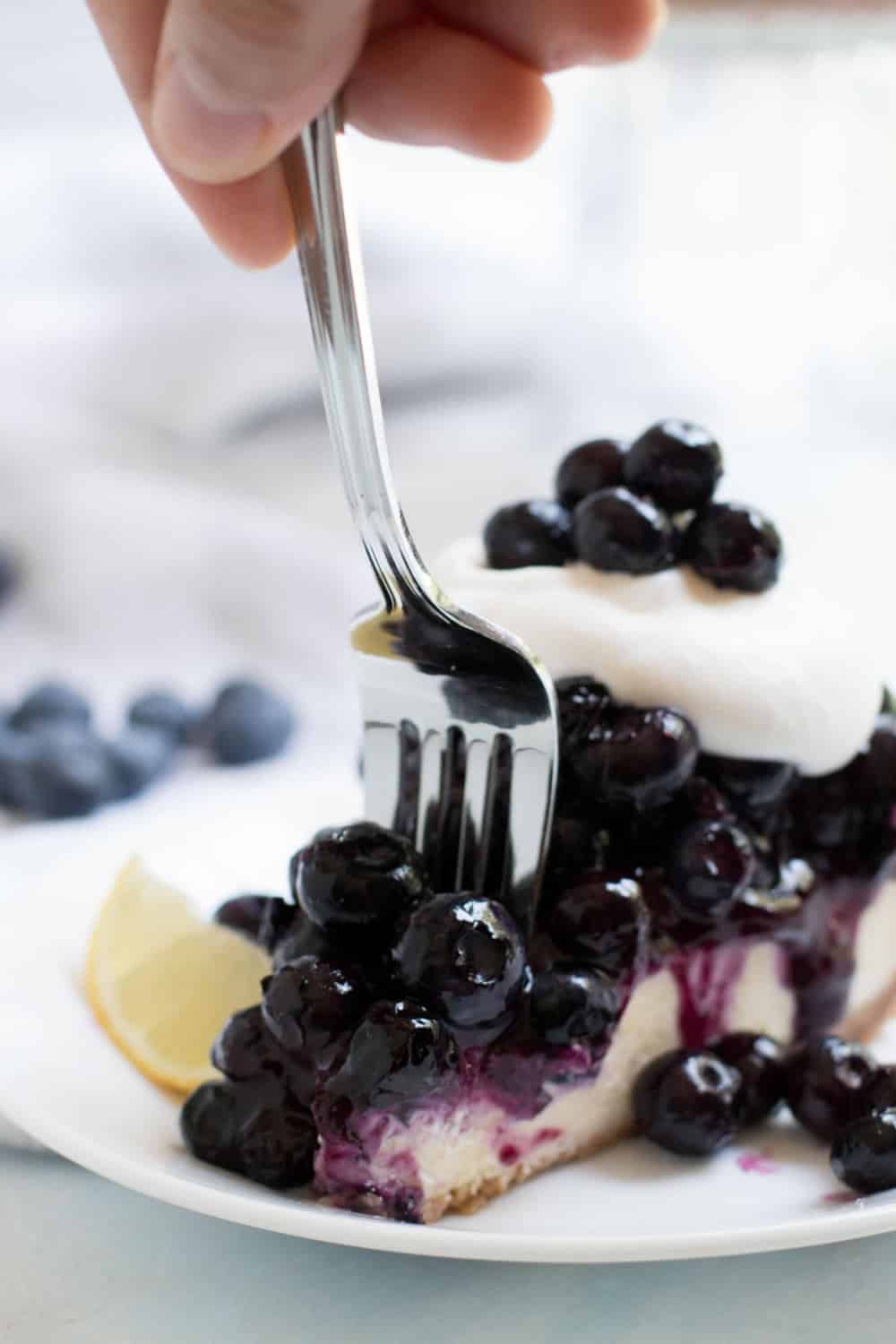 Call it what you will. 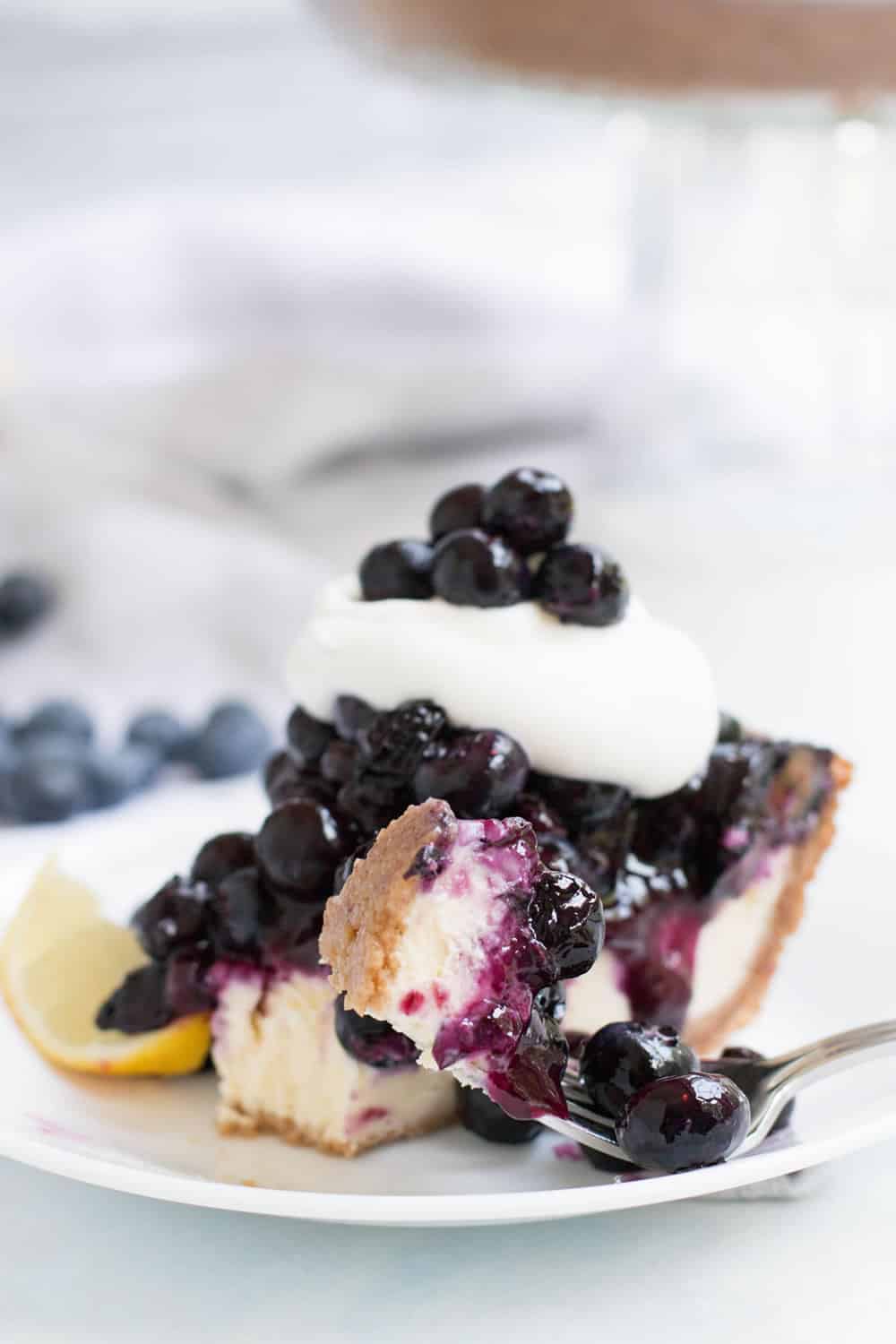 For the blueberry pie topping:

*Best to start this recipe the day before you want to serve it. The cheesecake needs a long time to cool and then chill in the refrigerator. I made the cheesecake one day and the filling the next day.

*Insure your cream cheese, sour cream and eggs are at room temperature before beginning the recipe. I leave them out for 2-4 hours. That being said, sometimes I don't leave the sour cream out because a few seconds in the microwave brings it to room temp quickly. Just don't overheat it.

*Here is the recipe link for Fresh Blueberry Pie Filling.

*Check out my chocolate chip cherry cheesecake post for lots of tips for cheesecake success.

*I used 9 rectangular sheets of graham crackers and 8 vanilla wafers for my crust. You can use any combination as long as you get to about 1 1/2 cups of crumbs.

*You can lighten up the recipe a bit by using light cream cheese and light sour cream.

There are no ingredients for the topping and an explanation on how to make it out of fresh blueberries.