For those of you who have never entered the land of rhubarb, perhaps this Strawberry Rhubarb Crisp will be the gateway to that tasty experience. 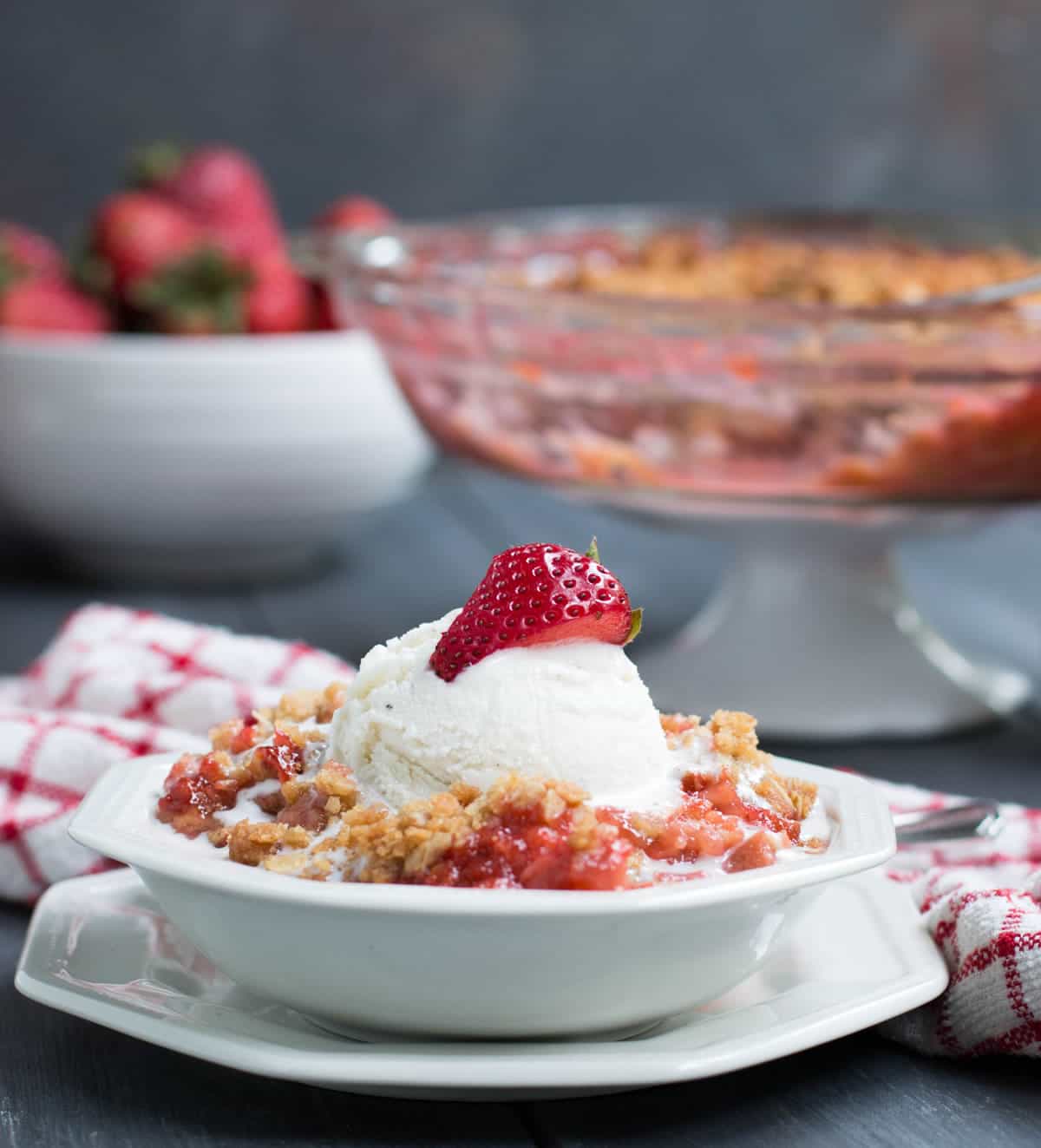 It was a long time before I entered that land myself. I wasn’t exactly avoiding rhubarb; it was more a lack of opportunity. I rarely ran into rhubarb that had already been prepared in some way. Aaaaaand, I never really made much of an effort to make it happen for myself; it was simply not on my radar.

It wasn’t until we joined a CSA last summer that rhubarb arrived on my kitchen counter, staring me down and challenging me to do something with it. So, I did. 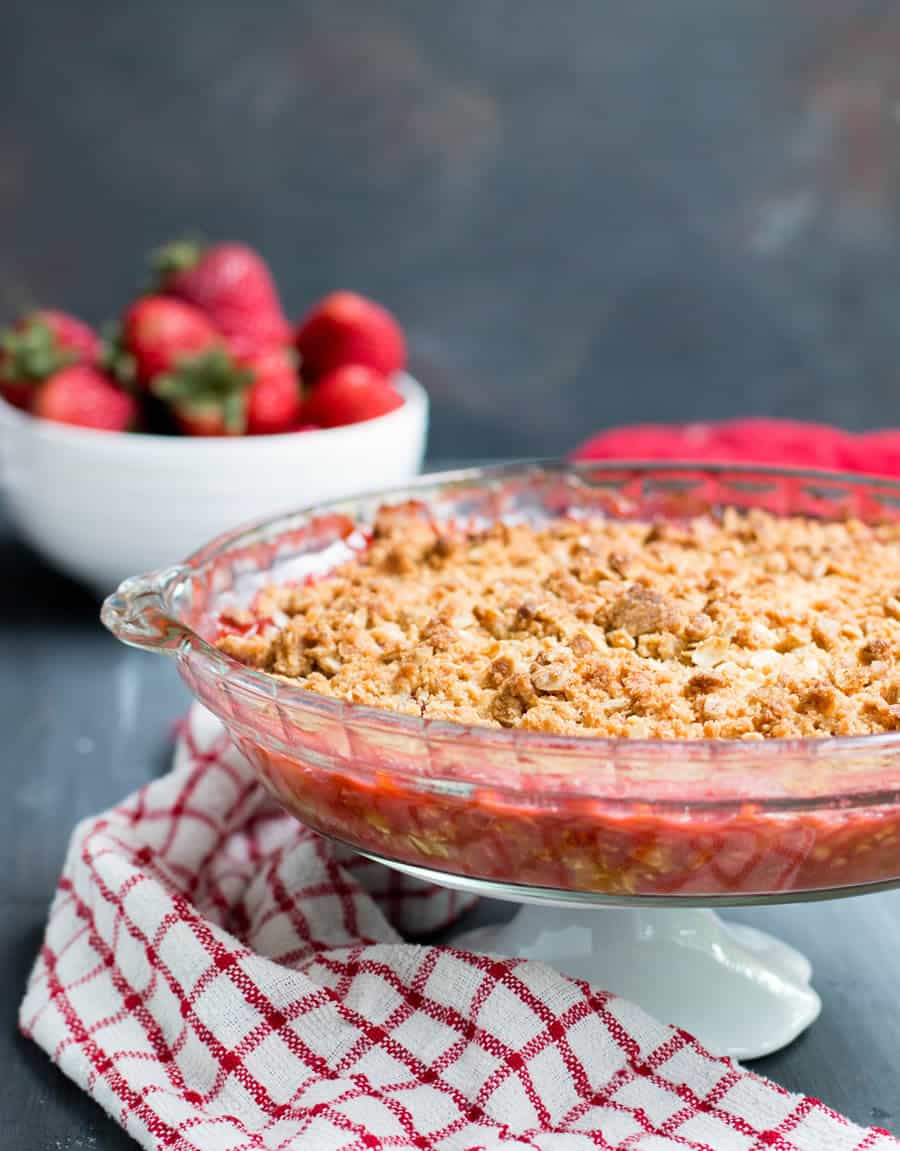 I made Rhubarb Upside Down Cake and Strawberry Rhubarb Hand Pies. I actually made other things with it that simply never made it to the blog. And guess what? My whole family LOVED it!

Suffice to say that I found it was quite easy to work with. It has a clean, tart flavor. Kind of like lemons but without the lemon flavor, or maybe like a tart green apple without the apple”ness.”

I enjoyed it as much on it’s own in the cake as I did with the strawberries in the pies. But, I happened to have a bunch of strawberries on hand, so they’re making an appearance in this Strawberry Rhubarb Crisp. 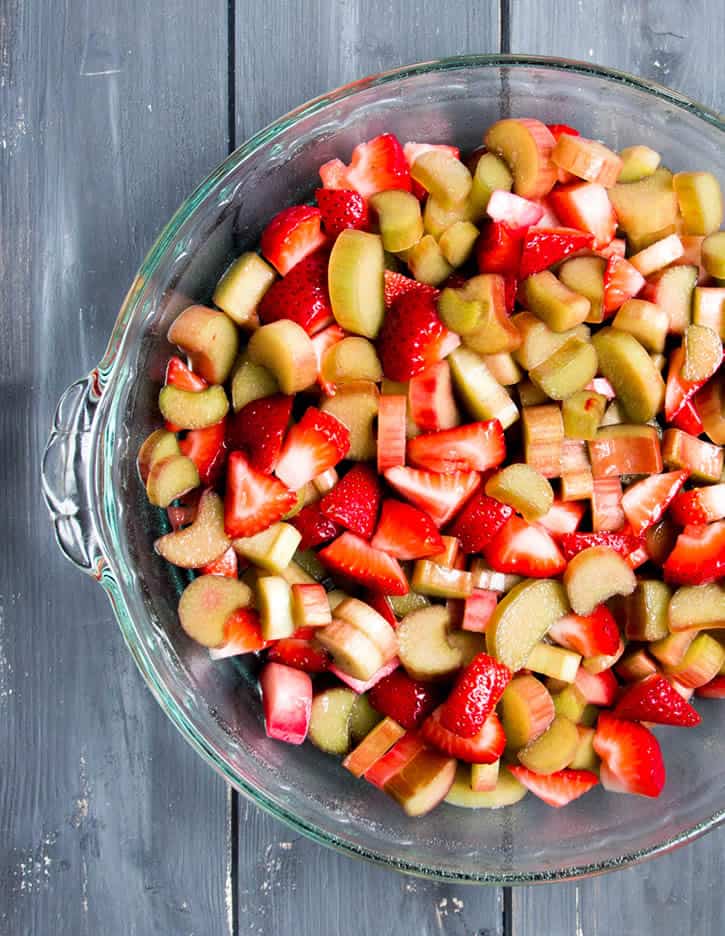 I’ve been all about crumb toppings lately. If you haven’t tried Chocolate Chip Crumb Cake yet, it is a MUST make! I think I’ve made it about 4 or 5 times since I posted it. That’s saying a lot considering I don’t have oodles of time to make things that are not specifically for the blog. 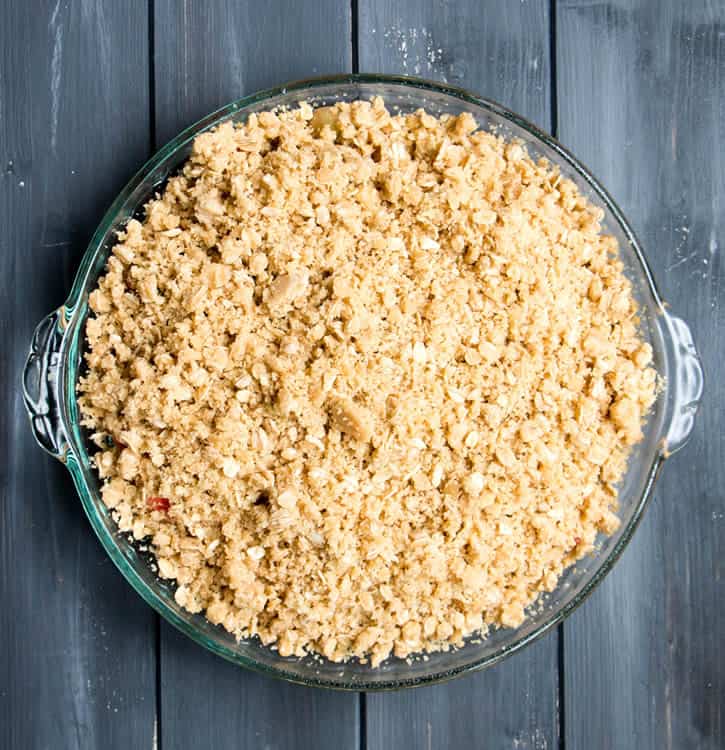 Speaking of making non-blog food, recently I spent three days making a birthday cake. Three. Days. (And, no, it’s not the first time.) It was an ice cream cake, so all of that time wasn’t spent working on it, but I swear it felt like it. One day to bake the cakes. The next day to fill them with ice cream. The following day to frost and decorate. Thankfully, it patiently waited for me in the freezer between each step. 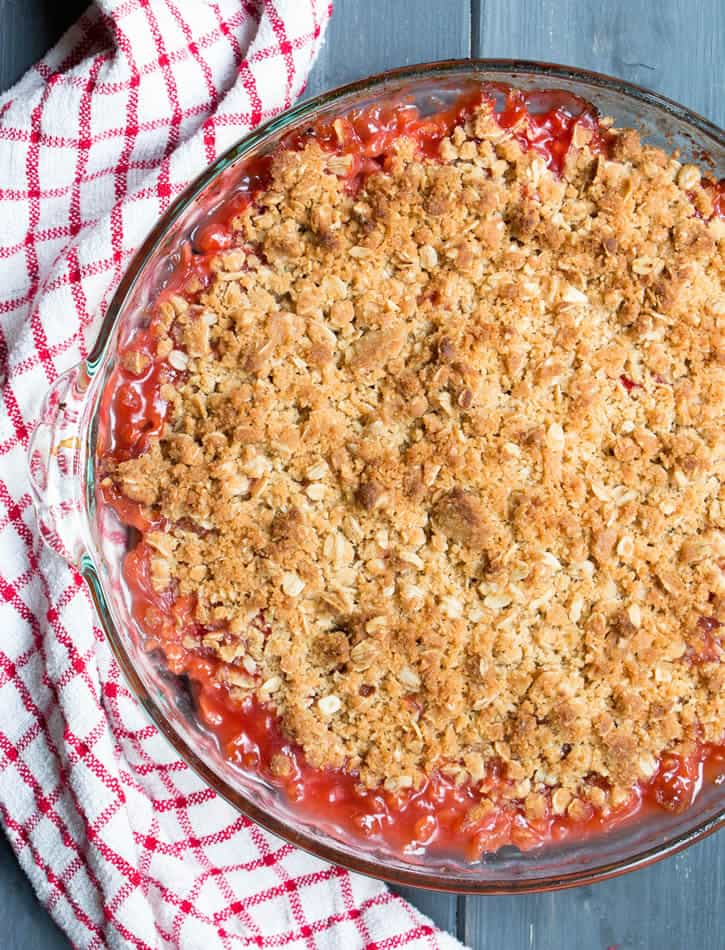 And yes, if I had made a cake that was normal sized, it would have taken less time. But, honestly, it was huge. I think I could have served 50+ with that cake. You know what that means? Yeah, my freezer is full of cake. And that’s after everyone took a big chunk home. 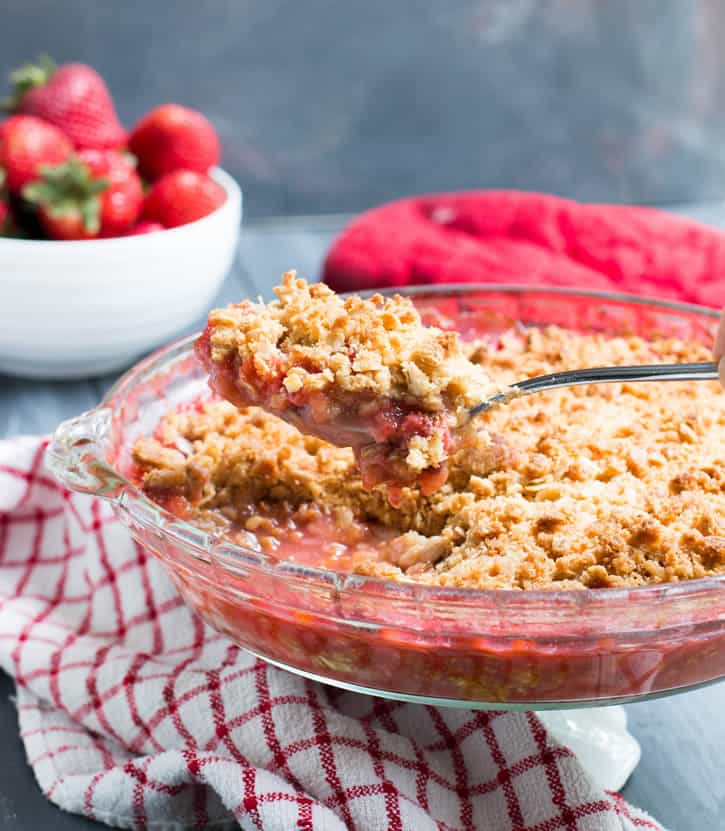 Needless to say, I only have photos of the full cake. No pretty slice pics. Happens every time. I made a whole bunch of stuff for this party and no, there was no time to shoot all of it.

You know what party prep is like and I’m type A. I’ve got lists and plans and plans and lists. No time for extra photo shoots that could have become beautiful blog posts. Nope, I had to stay on schedule.

Ok, where were we? Crumb topping? Yeah. Love it. So, for my first dance with rhubarb this season I thought I’d go with a “friend” of crumb topping and make a crisp. You know what’s great about making any kind of crisp? It’s EASY! 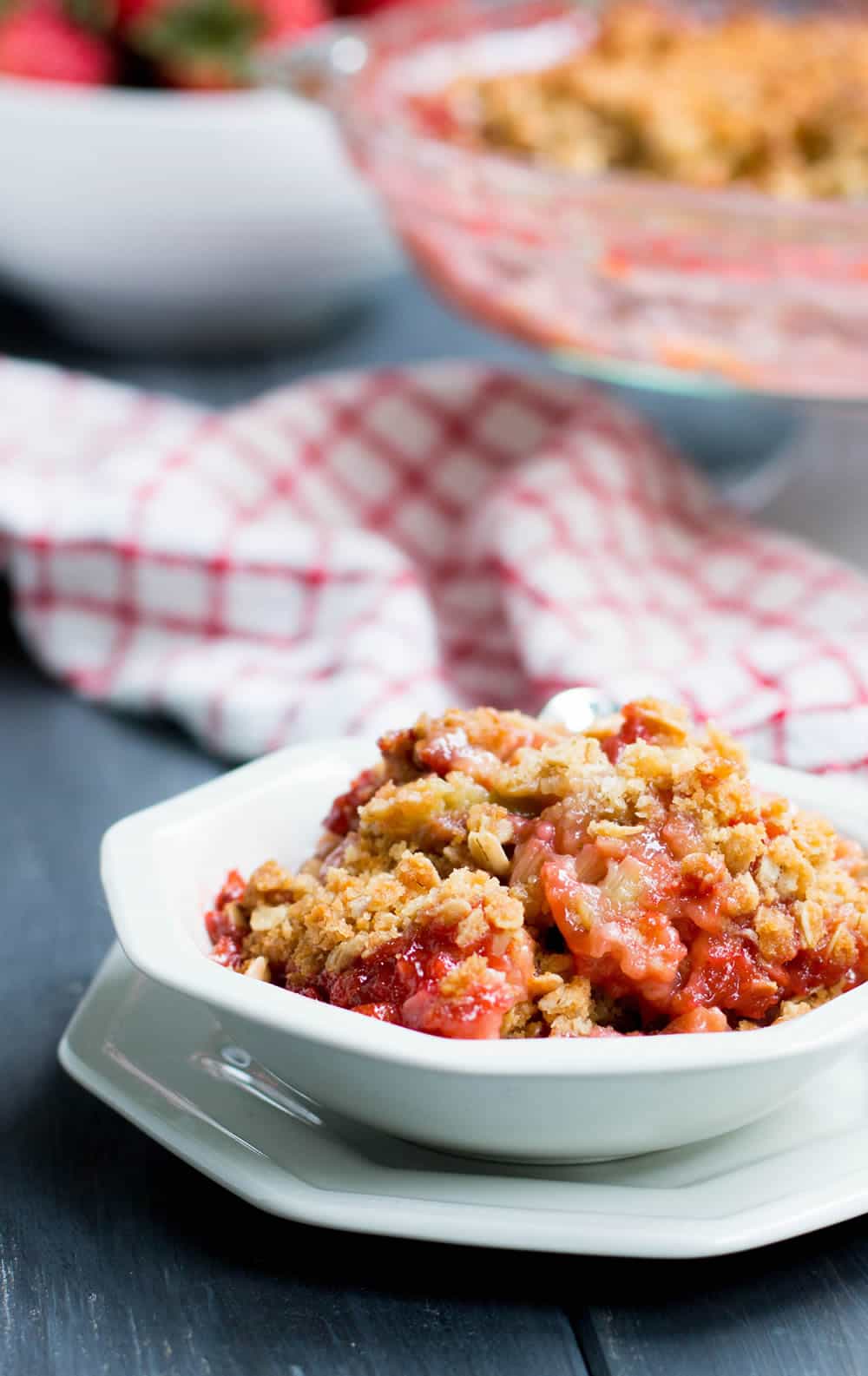 Really. Chop up your fruit (or vegetable, in the case of rhubarb.) Toss it with some sugar, some lemon juice and zest and throw it in a pan. I chose a deep dish pie pan, but any shallow baking dish will do.

I didn’t go heavy on the sugar for the filling. You know I don’t like desserts that are way too sweet. I almost made it with no sugar in the filling, but I figured the tart rhubarb could use a little sugar just to take the edge off. After all, I was going to top it with a sweet topping. In my mind, that is really where the sweetness comes in. 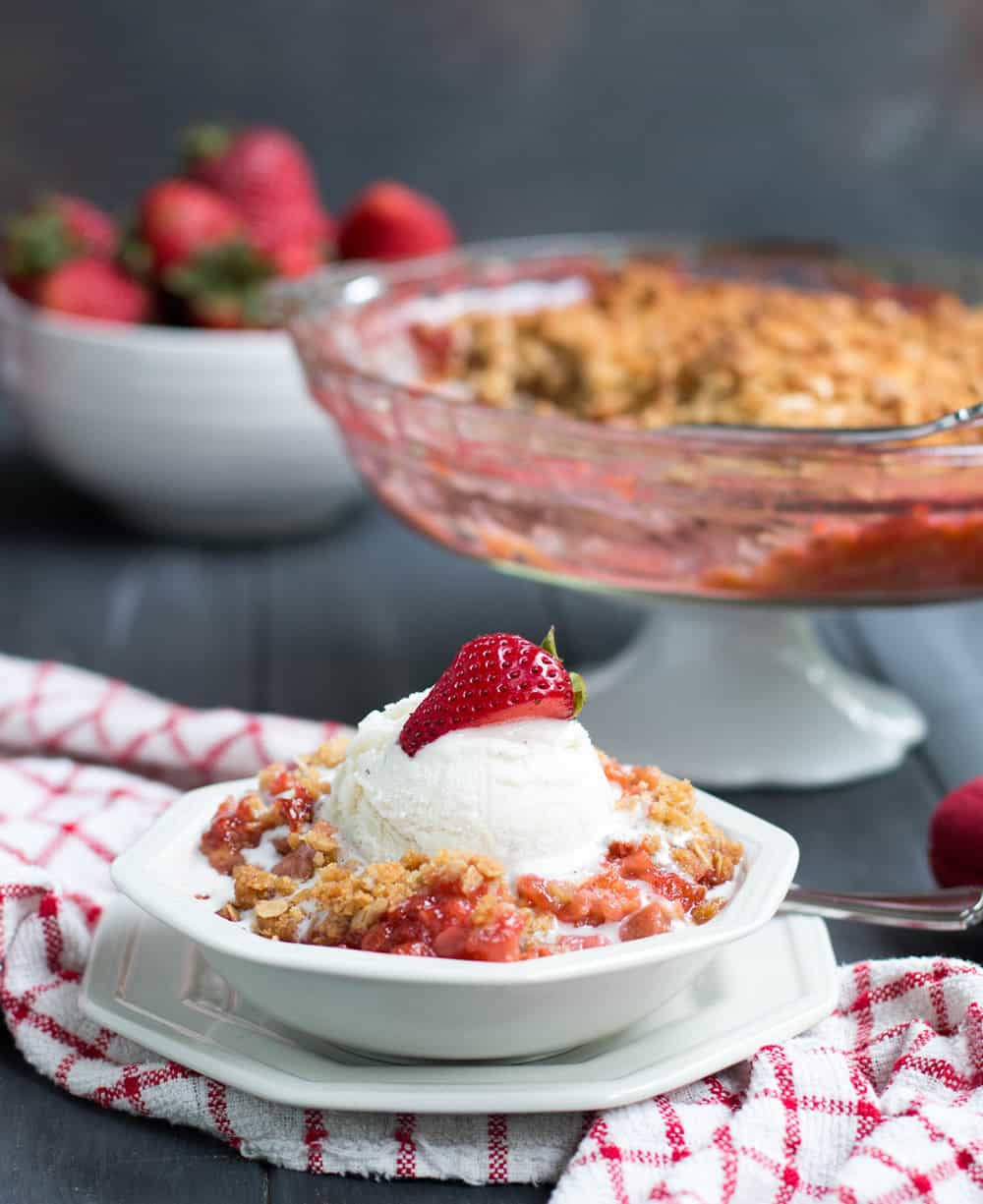 And it was definitely sweet enough…even for my kids. (Although I do have a sugar loving friend that probably would have wanted double the sugar, easily :)

The first time I made this, I went a little heavy on the crumb. My family always wants more of the topping, and it was delicious, but maybe just a little crumb heavy.

So I backed off on the amount. There’s still plenty of crumb topping, but I think the final filling to crumb ratio in the recipe is more balanced now. 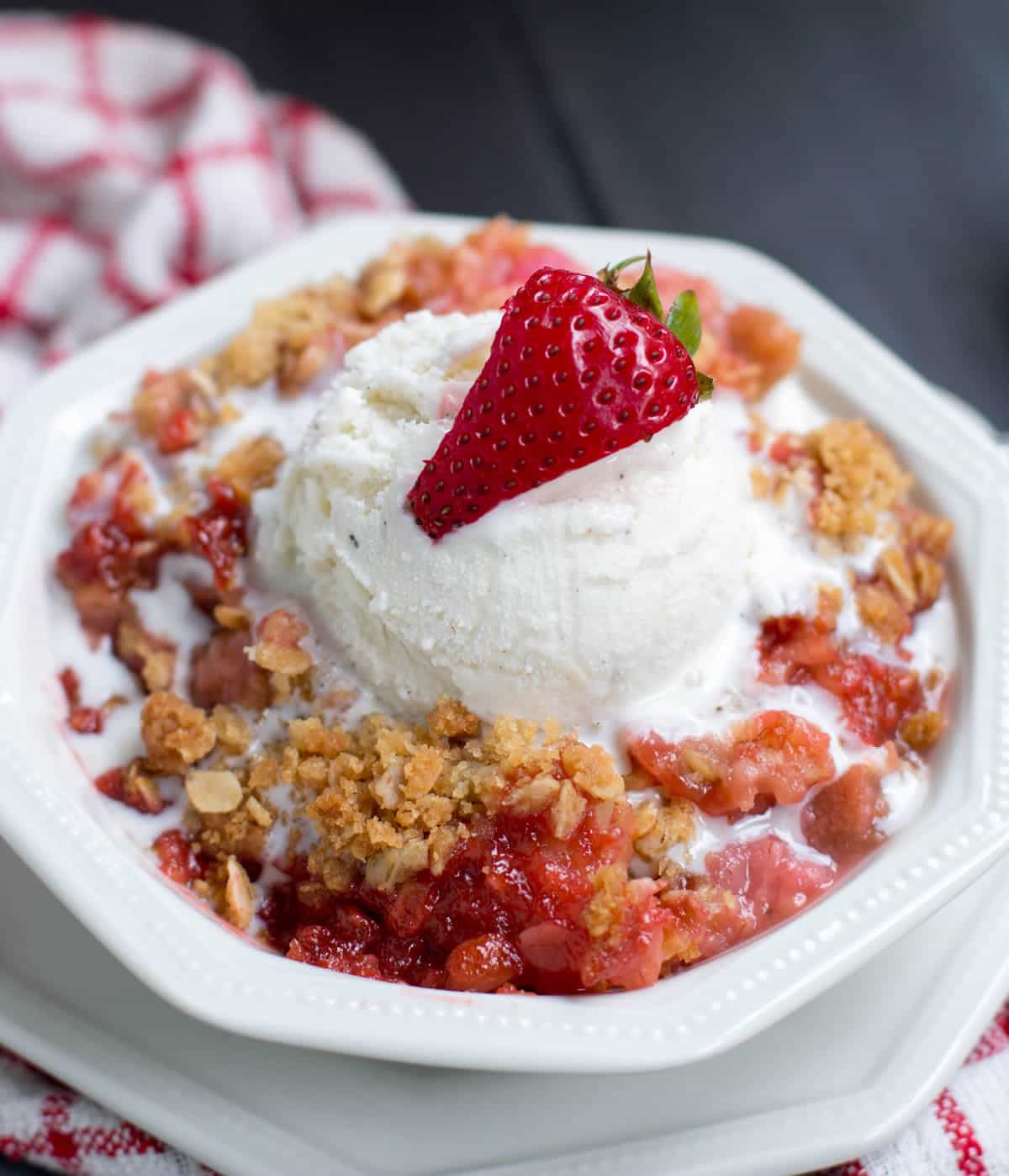 I like to work it in with my hands; it goes faster. And I’ll disclose that I use a disposable gloved hand to do it. It’s not necessary but it’s easier clean up…for my hands and my nails.

It’s also easier to put the topping on by hand. Just crumble it all over the top, covering the strawberry and rhubarb mixture. This is when I knew I had a bit too much topping the first time.

After I covered the top completely, I had enough to just keep piling it on and on. Oh, and it was good. But even I had to admit it that such a thick crumb topping took away from the filling. 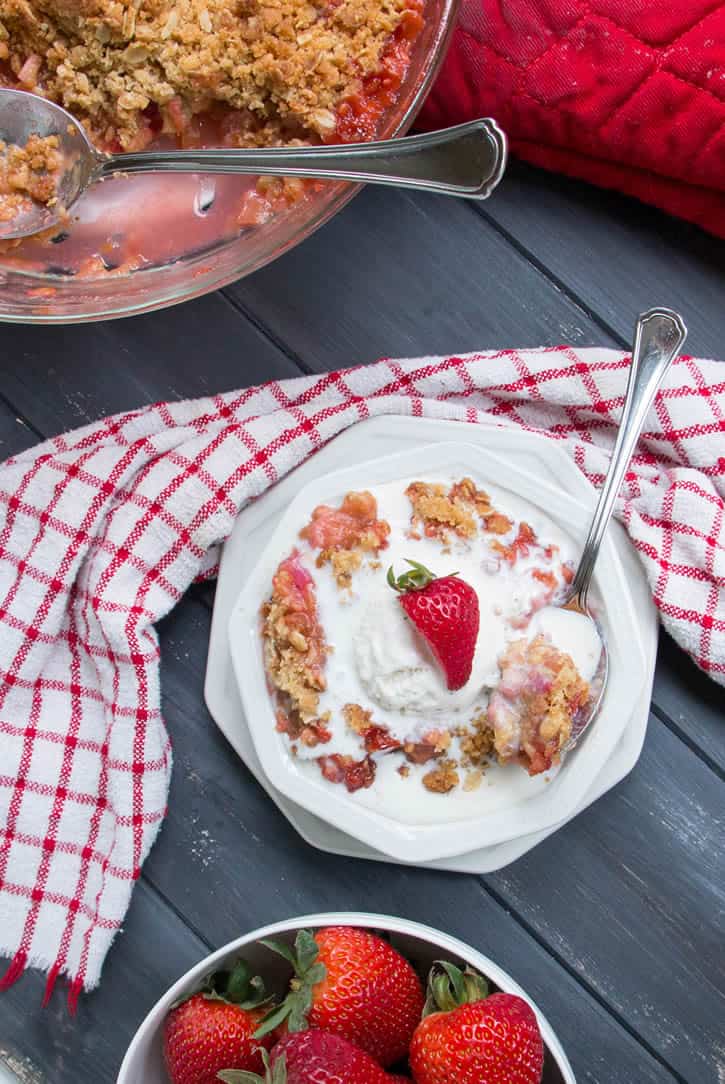 Once you get the crumb topping on, just bake it until the filling is bubbly and the top is crisp and golden. See how easy? That’s all there is to a crisp. Just cut up some stuff for the filling, mix it with a few ingredients then top it with the crumb topping.

It’s a little like pie without having to make a pie crust. Of course, ice cream is mandatory. Warm Strawberry Rhubarb Crisp. The tart rhubarb pairs so nicely with sweet berries and the sweet, crispy, chewy oat topping. Then a scoop of cold vanilla ice cream just melts on top of the warm filling….*sigh*…it’s a yummy dessert.

You may not have tried rhubarb before, but I’m pretty sure you’ve had some kind of fruit crisp. So, for those of you who have hesitated to try this vegetable (that works so well as a fruit) or might have been intimidated by it, let this easy recipe be your gateway to rhubarb land. 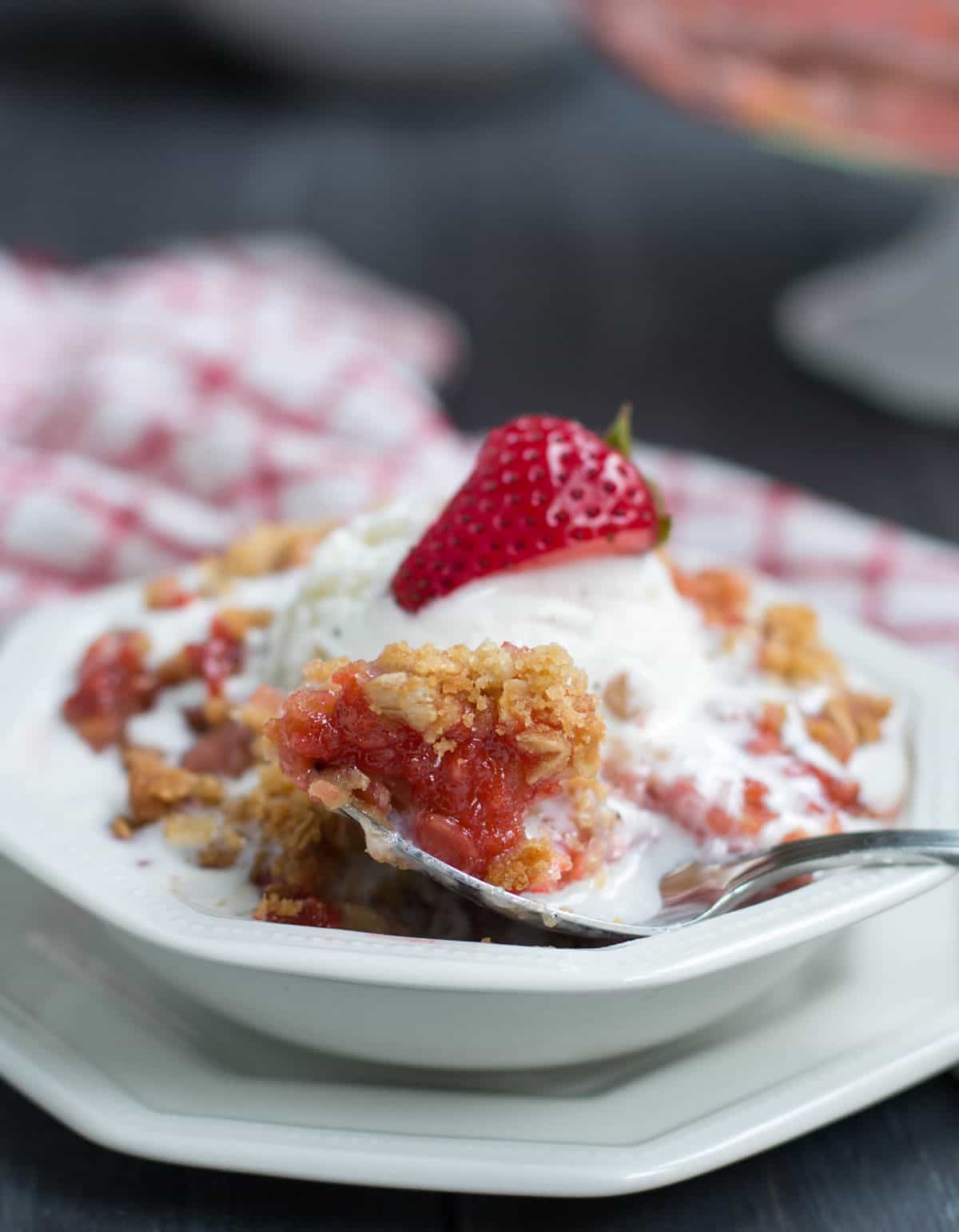 For those of you who are already fans of rhubarb, go forth and bake!

*I used 2 Tablespoons of sugar which allowed the tartness of the rhubarb to shine through. I allowed the topping to carry the sweetness instead. If you like a sweeter filling, simply add more sugar to taste.

Not even 8am and I'm already craving dessert... totally normal, right? Right.

Hey, it's got oatmeal in it, right? So, yeah, perfectly normal ;)

I'll be honest - I have never baked or cooked with rhubarb. Which is odd, because my Mother grew it in her garden, and once she brought it into the kitchen she used it for many dishes. You have convinced me to give it a shot with this recipe. Thank you Ramona!

I have to tell you, it's not hard to love. It has such a clean, tart flavor. I love it alone and with the berries!