What should one do when one has left over pound cake? Make Raspberry White Chocolate Pound Cake Biscotti! 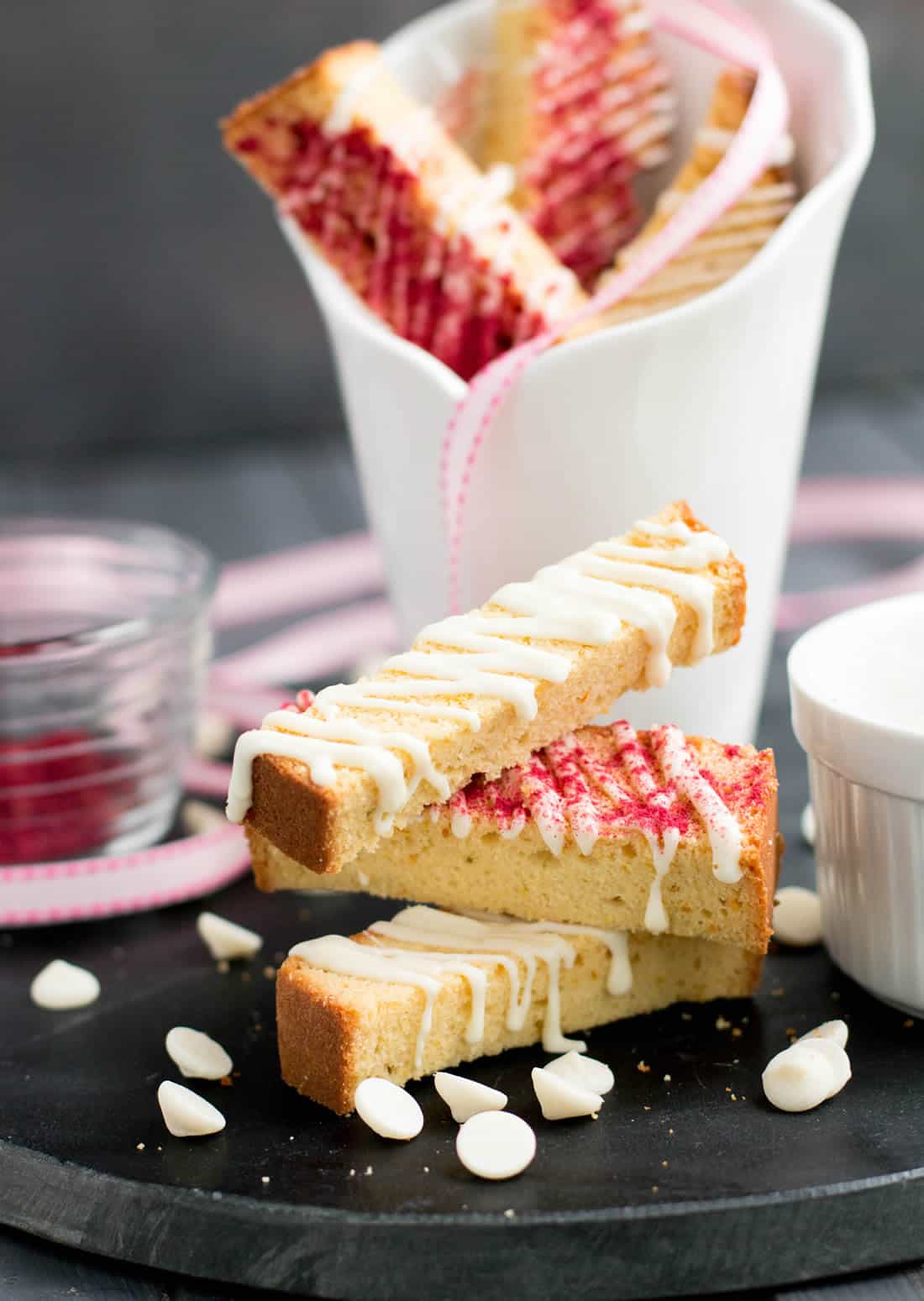 This is the last installment in the saga of what happened after I made Italian Cream Cake and had left over egg yolks. Those egg yolks turned into Luscious Lemon Curd. Then, the question of what to do with the lemon curd…

If you’ve been tuned in the past month, you’ll know that I wanted to make Strawberry Lemon Pound Cake Trifles with that lemon curd. So then I had to make a pound cake. But not just any pound cake, I went with a Triple Citrus Pound Cake. 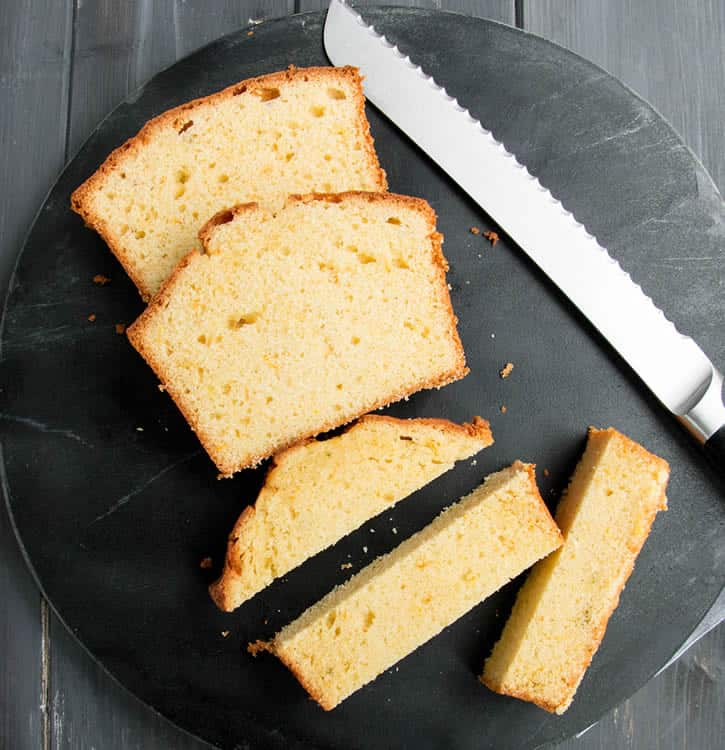 The truth was, by the time we slowly got through that list of treats (and I still have some of the cream cake in the freezer) we were kind of over pound cake. So there it sat, on the counter for a few days. Any body want a slice of pound cake? Nah, not now. Maybe later.

Later never came. The pound cake was now past it’s prime…still edible, just not at it’s peak of quality. My waste, not want not mentality kicked in. I thought it was time to repackage that bit of left over cake. Time to make biscotti!

This might be the easiest biscotti you’ve ever made. Really. Whether you’re just trying to use up some left over pound cake, or you like the idea so much you decide to just go out and buy a pound cake just you can “biscotti” it, basically all you’re doing is cutting up the cake and baking it until it’s dry and crisp. 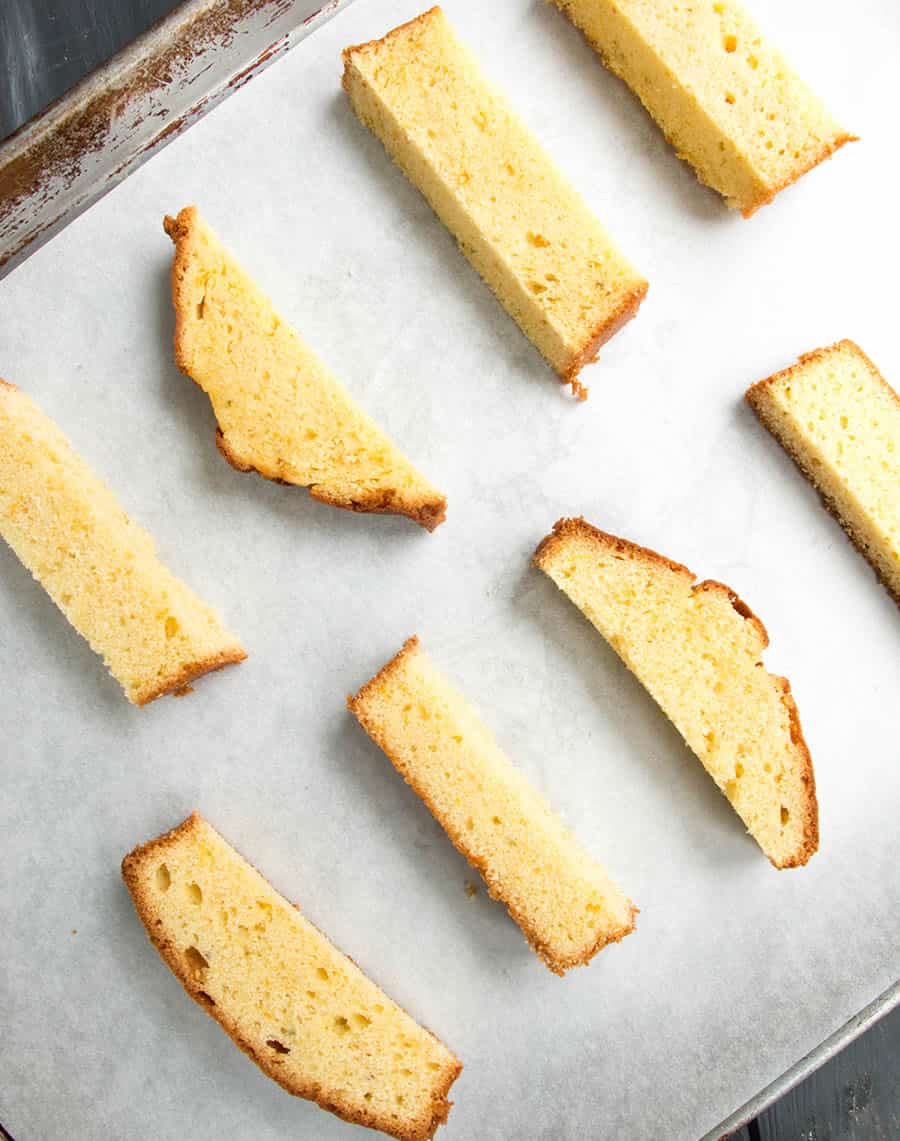 For those of you who are non-bakers, it’s kind of fun. This takes the whole slice and bake idea to cake land. Love it.

I had about a 1/4 of a pound cake left over. I sliced it into about 1″ slices and then cut each slice into three logs. The thickness and shapes you cut is entirely up to you. Thinner and smaller slices will bake faster, thicker and larger slices slower. I just cut mine into what I thought felt like the size of a typical biscotti cookie.

I thought about just cutting each slice into halves, and making squarish kinds of slices, but knowing these would be dipped into tea or coffee, I stuck with the log shape. 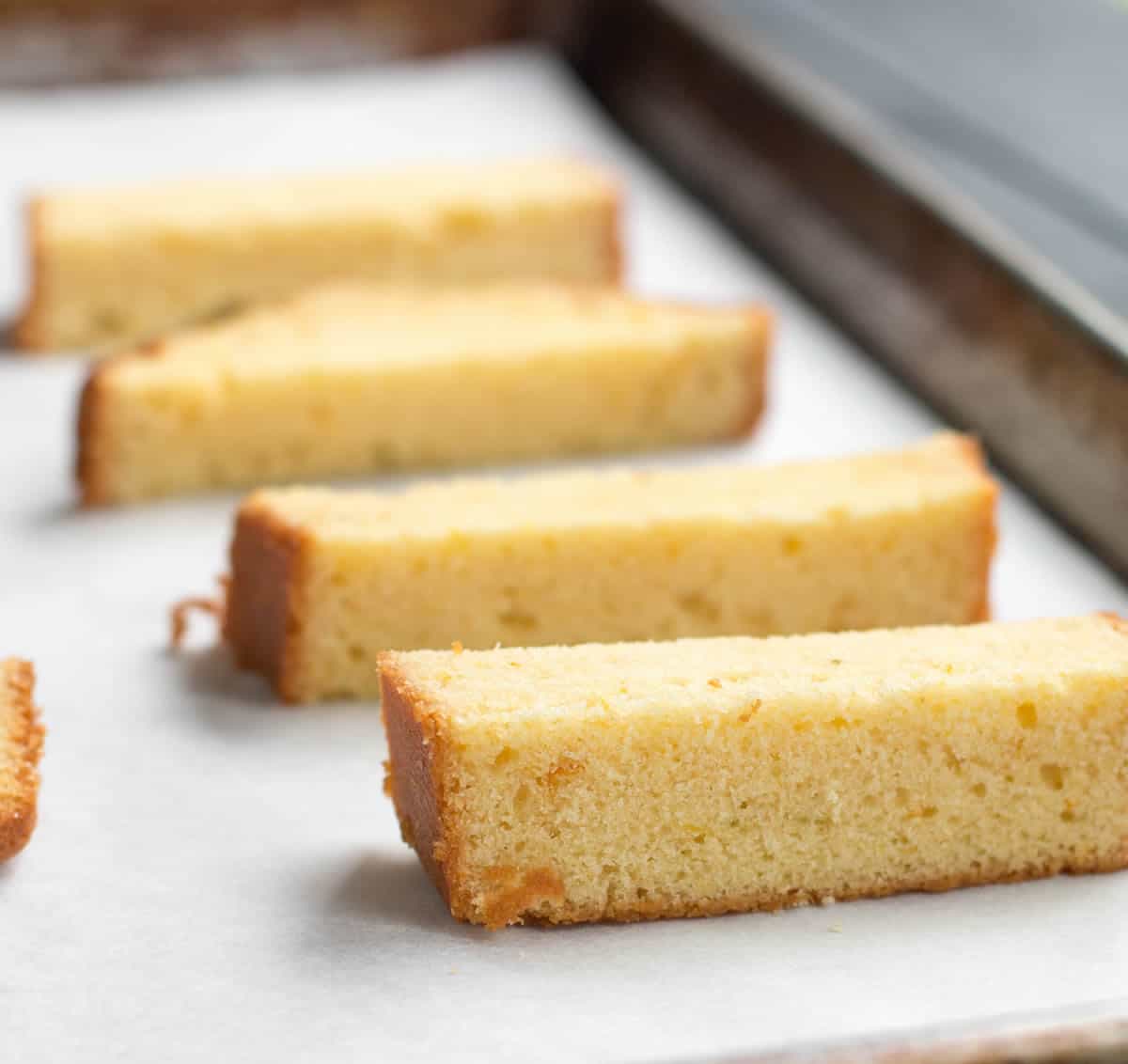 I baked them at a low temperature, 300 degrees F. to be exact. As far as time goes, it’s really based on how dry your pound cake is to begin with, how thick/large your slices are, how crispy you want them, and if your oven runs hot or cold. If it runs hot, I would lower the temperature to 250 or 275.

To guard against over browning, you can also lower your oven rack to just below the middle. That moves it a little further away from the heat source so that it can dry out/toast without getting too brown.

I baked mine until they were thoroughly crisp and dry. I wanted no semblance of cake texture left. 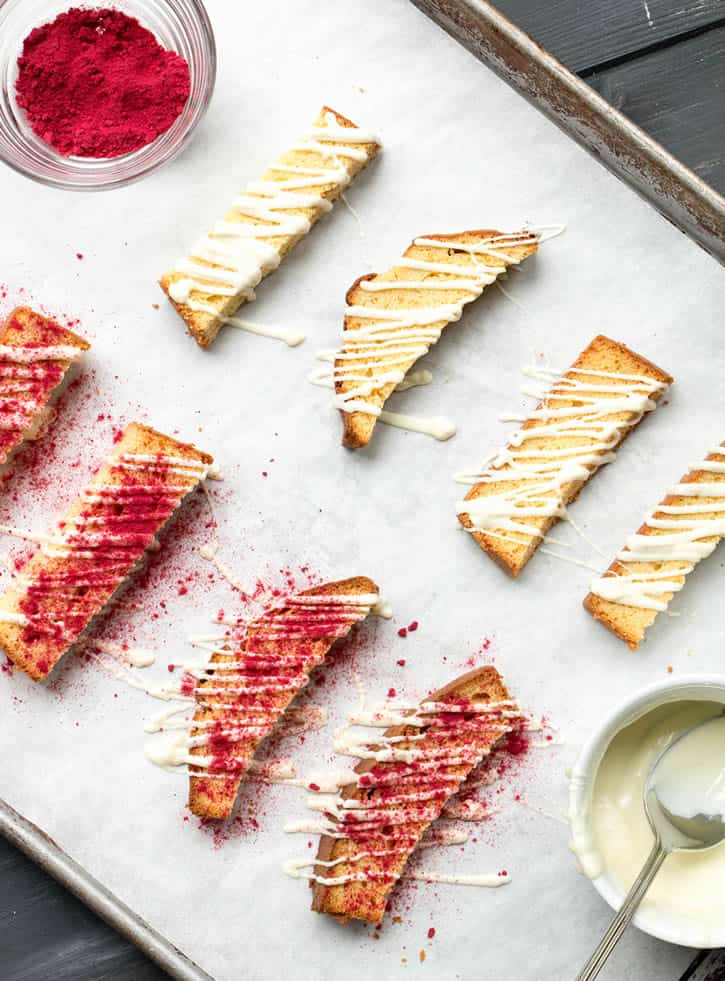 Once they were cool, I knew that I had to top them. Oh, they don’t need any topping. They’re quite good on they’re own. But I wanted to add some other flavors… you know, dress them up a little.

Now you can create any number of flavor combinations, but since my pound cake was a triple citrus pound cake, I thought I’d play off that with some melted white chocolate and raspberry. Sounds good, right? Raspberry White Chocolate Pound Cake Biscotti. A fancy name for left over cake. Almost sounds as if I planned it from the very beginning ;) 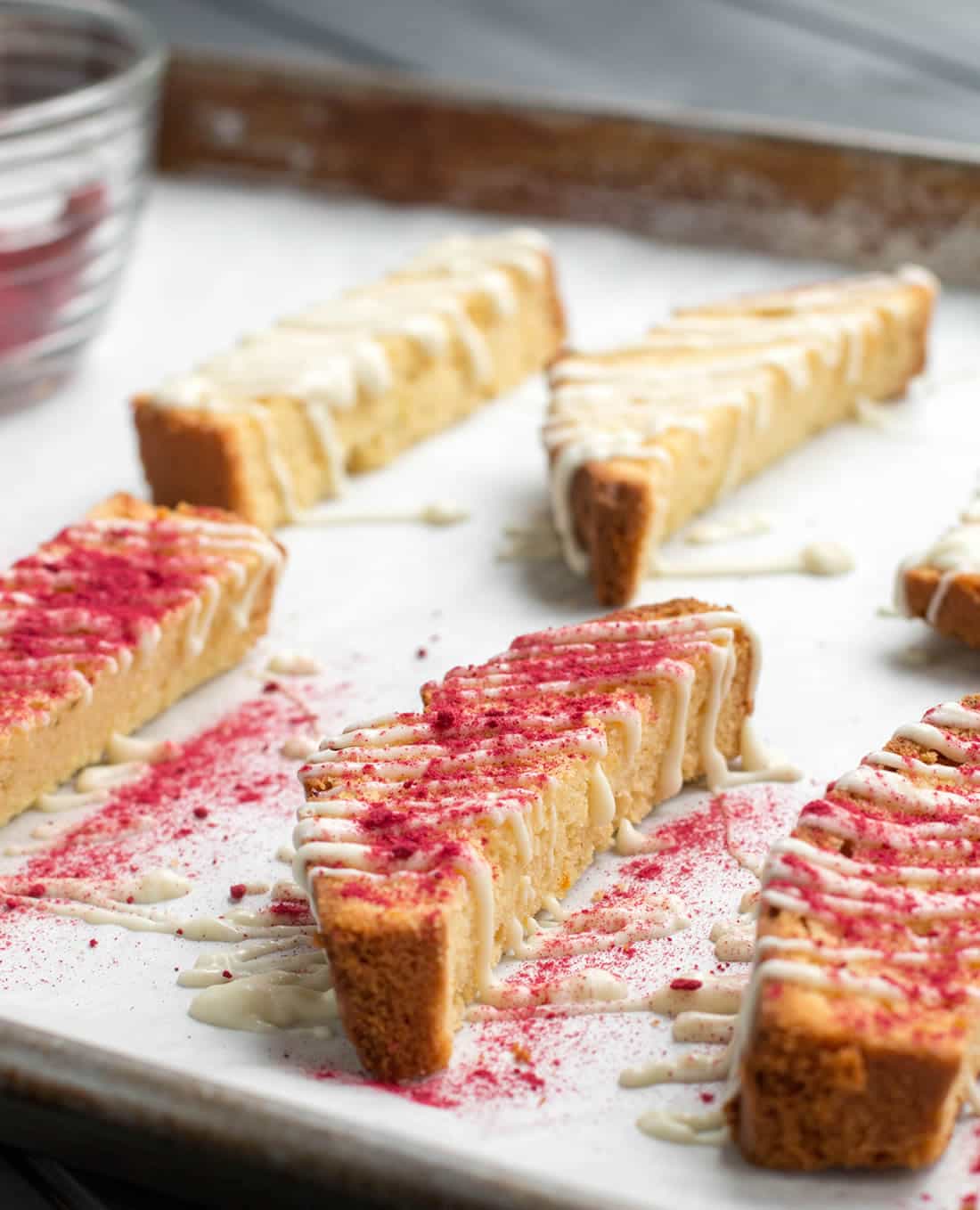 I melted the chocolate quickly in the microwave. A bit of shortening helps keep it loose and ready to drizzle. I didn’t need a lot, I only had one small tray of biscotti. If you make more biscotti, make more chocolate.

Then, the raspberry part. I am gaga over freeze dried fruits and I use them for all kinds of things. I used this raspberry powder in Raspberry Valentine Sugar Cookies and I use fruit powders to flavor everything. They’re great anywhere you don’t want to use fresh fruit because of the water content. 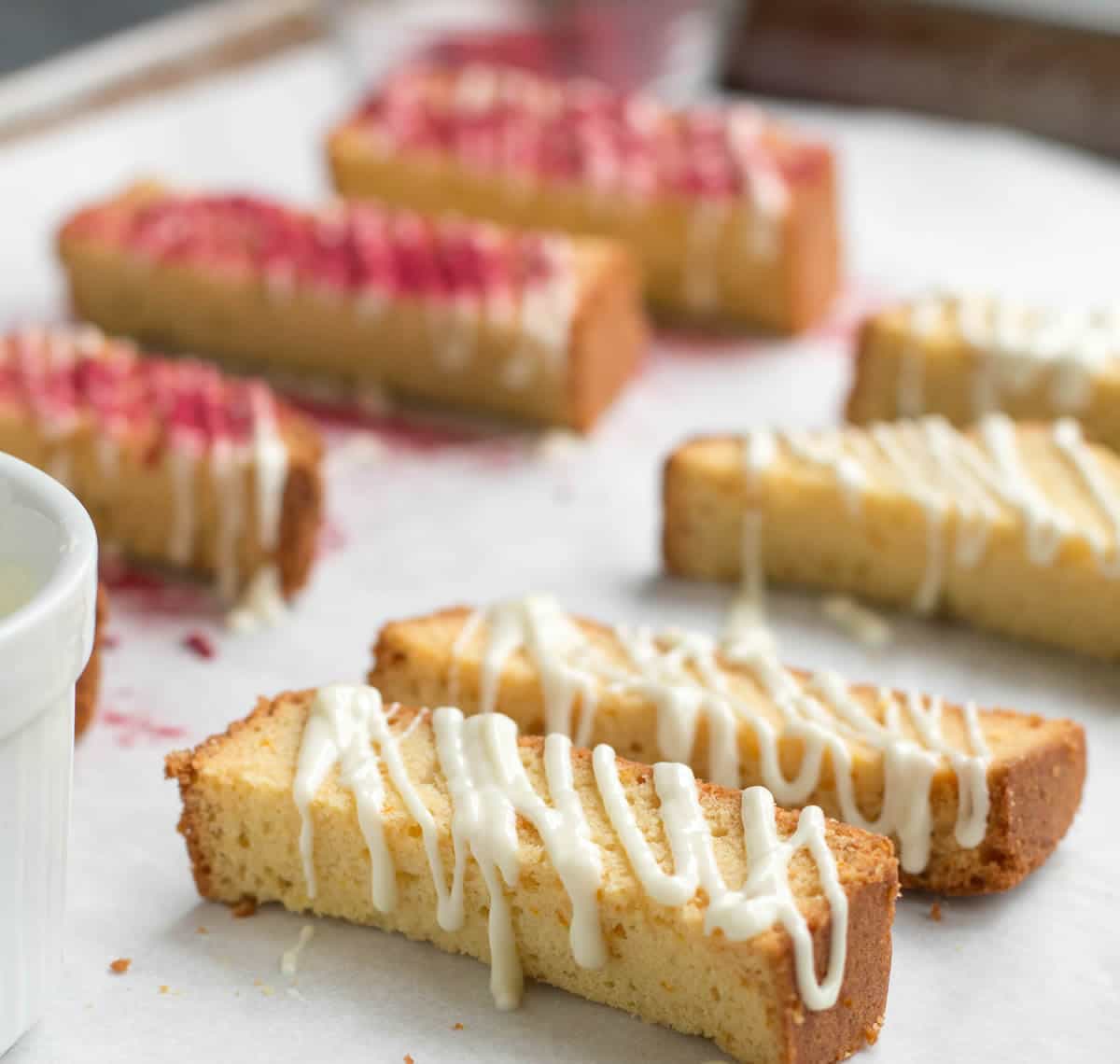 And the cool thing about freeze dried fruits is that all it is..is the fruit. So, it tastes like the fruit because it IS the fruit.

I’m particularly fond of the raspberry powder because the color is insanely rich. It looks like pigment powder for paint. It’s intense. And beautiful. I love how it looks; I love how it tastes.

So I sprinkled some of that gorgeous fruit powder over some of the white chocolate drizzles. Pretty, pretty! At some point, I realized that with the white and the pink and the ribbons…this whole scene was starting to look more like a post for Valentine’s Day, but I pushed on with the pink and didn’t look back. #noregrets 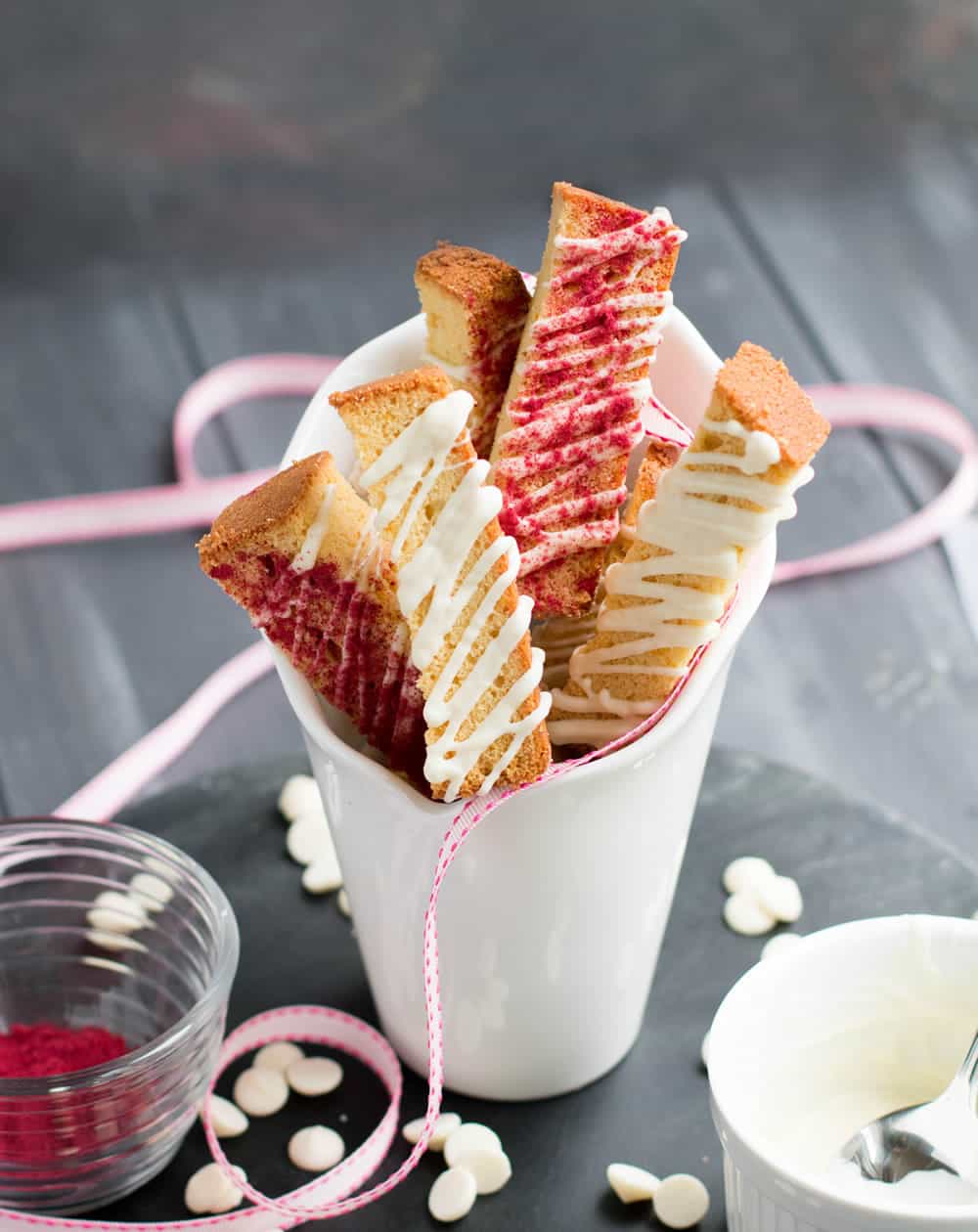 But how would it all taste? Well, I’m happy to report that it was wildly successful. The cake was perfectly crisp and crunchy. The raspberry powder mixed with the white chocolate was like berries and cream. Delightful!

When quickly dipped into coffee or tea, it turned back into cake, with all it’s buttery cakey goodness. The chocolate melting just a bit, the raspberry mixing in with both the melty chocolate and the cake. Yeah, so good. Like all the flavors of a raspberry short cake wrapped up into one lovely dunkable bite. 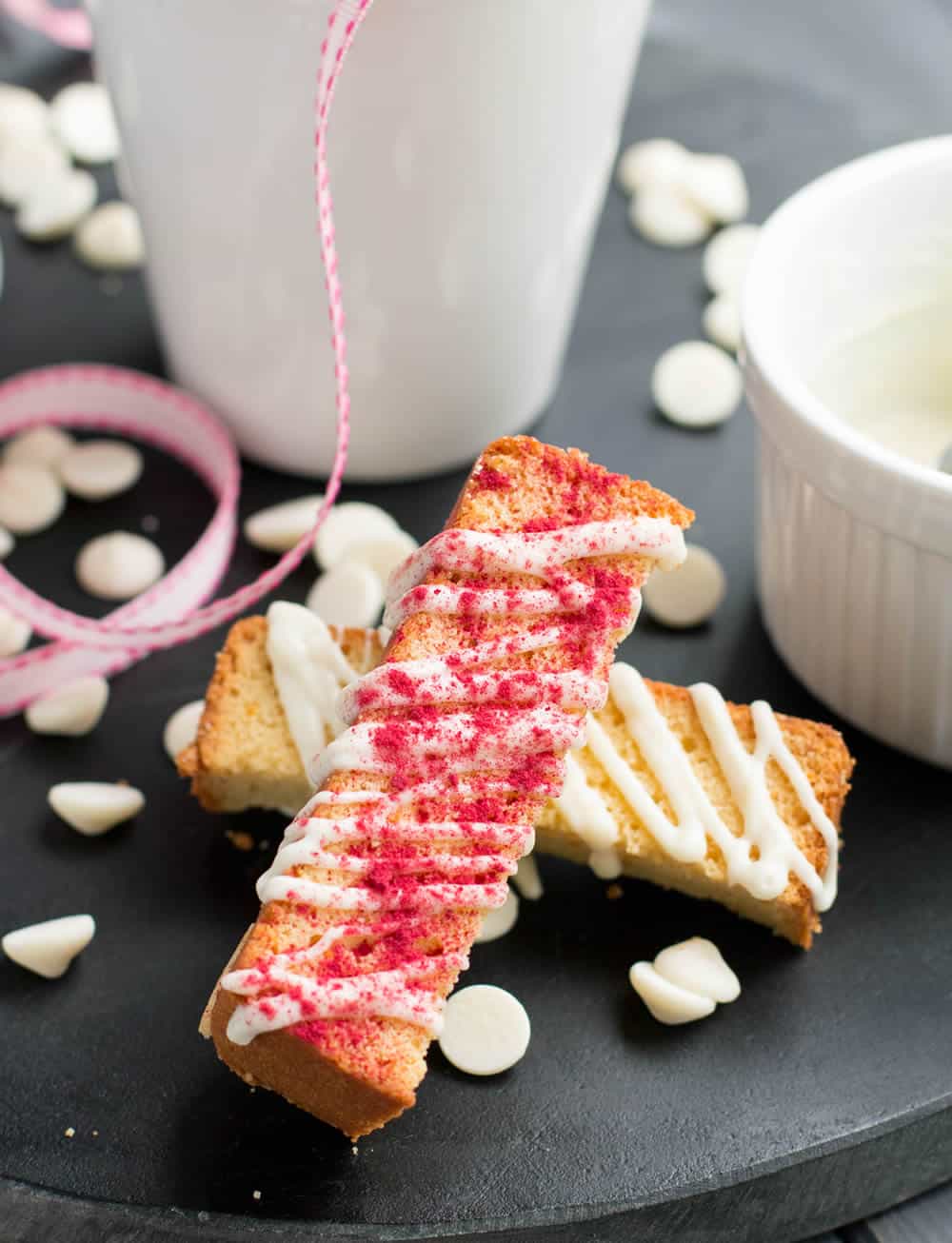 Raspberry White Chocolate Pound Cake Biscotti. When I offered up the newly reinvented leftover pound cake, everyone said, “Yes! I’ll have some!”

Funny how that works. As a merchant, I know all too well that sometimes just moving an item from one side of the floor to the other, or combining it with other items can be the difference between a best seller and a mark down. So, I simply “re-merchandised” my pound cake :)

And now, at lost last, my friends…THIS is the final chapter in the left over egg yolk saga. It started with one cake and, five recipes later, ended with one cookie. 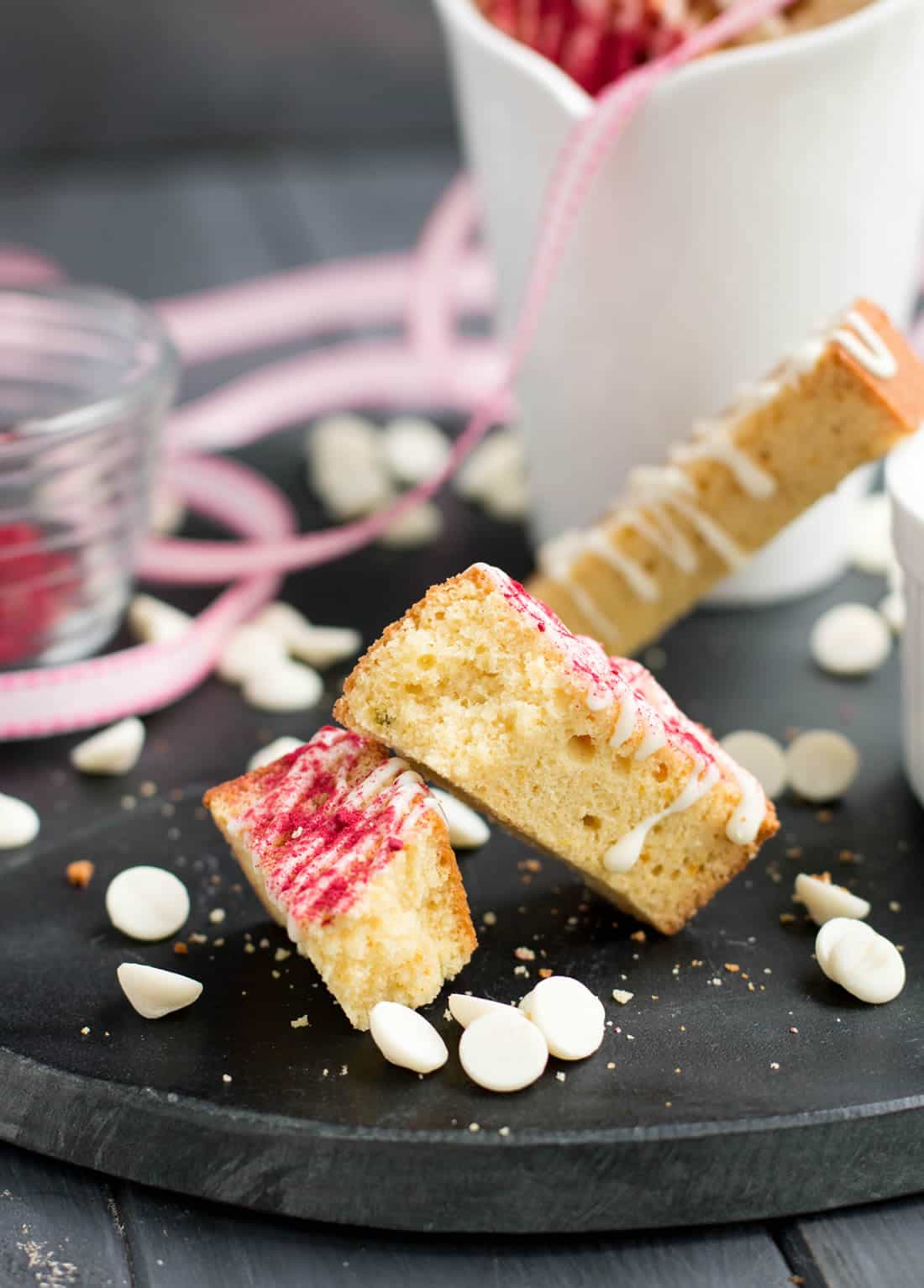 I love a story with a sweet ending :)

*Baking time will vary based on how dry your pound cake is to begin with as well as how thick you cut your slices.

*If your oven tends to run hot, I would bake at 275 or 250 instead. It will take longer, but you don't want to risk over browning your cookies.

*The biscotti are delicious plain or topped with your favorite chocolate. I'm giving you the chocolate amounts I used for the few slices I had. If you have more biscotti, double or triple the chocolate recipe.

*To make raspberry powder, process freeze dried raspberries in a food processor until it becomes a powder. Sift out seeds. Store in an air tight container.

Genius! I thoroughly enjoyed this "series" ! So many wonderful inspiring recipes!

This last installment was a fun one! I have a feeling I might be making sure we have left over pound cake just so we can "biscotti" it! Thanks for following along and being such a loyal reader :)