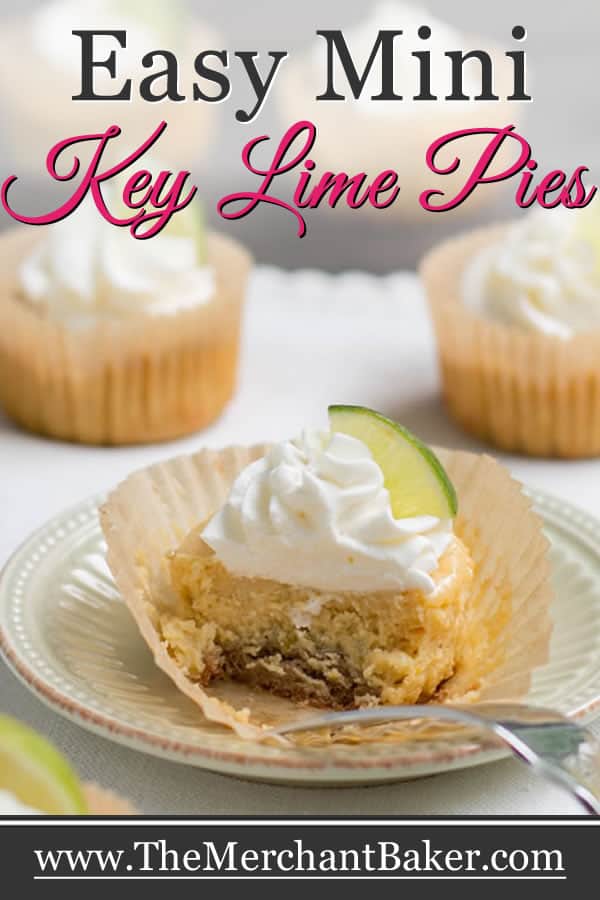 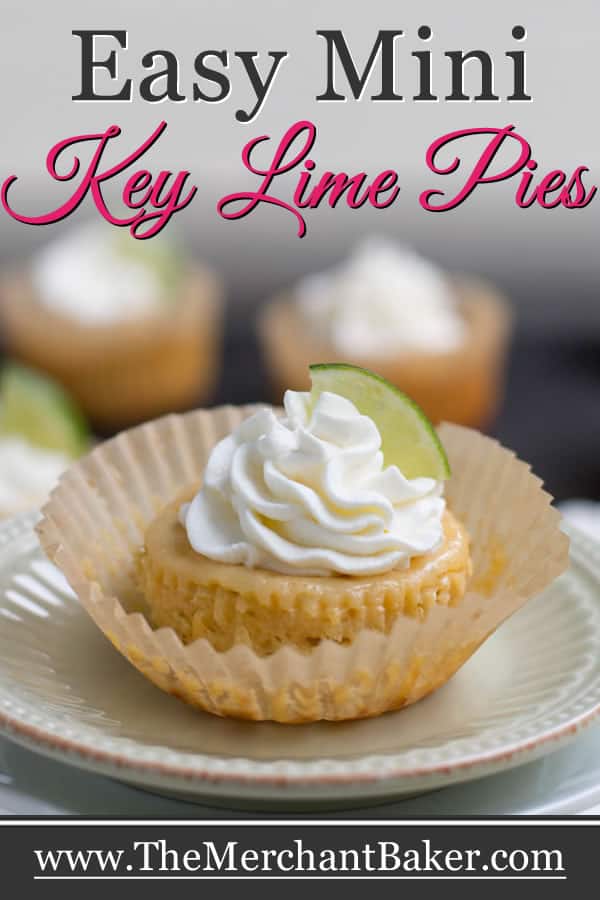 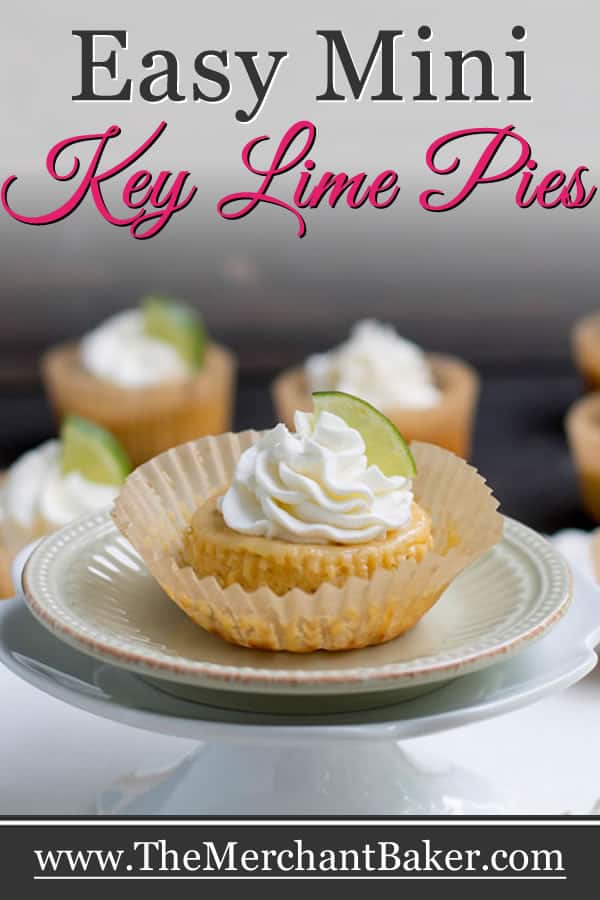 Easy Mini Key Lime Pies come together quickly with just five ingredients and one bowl. The pies are creamy and full of fresh lime flavor, a perfect dessert for summer!

Need a quick and easy dessert? Here you go! One bowl. Five ingredients. Stir, pour and bake. That’s all you’ve gotta do for these Easy Mini Key Lime Pies.

(Full disclosure, I’m not counting the whipped cream portion, because I know some of you, for maximum ease, may just pick up a can of ready made whipped cream. Feel free to call it the sixth ingredient, if you must ;)

As much as I love to get deep in a long baking project (I’ve clocked some at 18 hours), 95% of the time, I just want to make something that doesn’t have 12 steps. 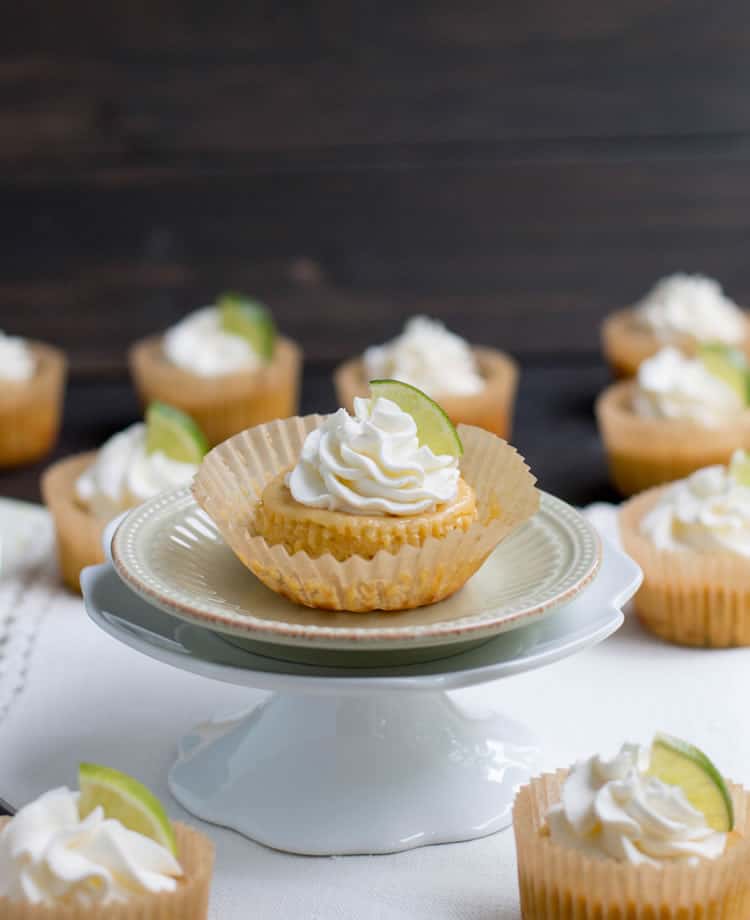 I mean, it’s summer, right? And even though I haven’t been in school for about 100 years now, I still feel like summer is supposed to be our time off. 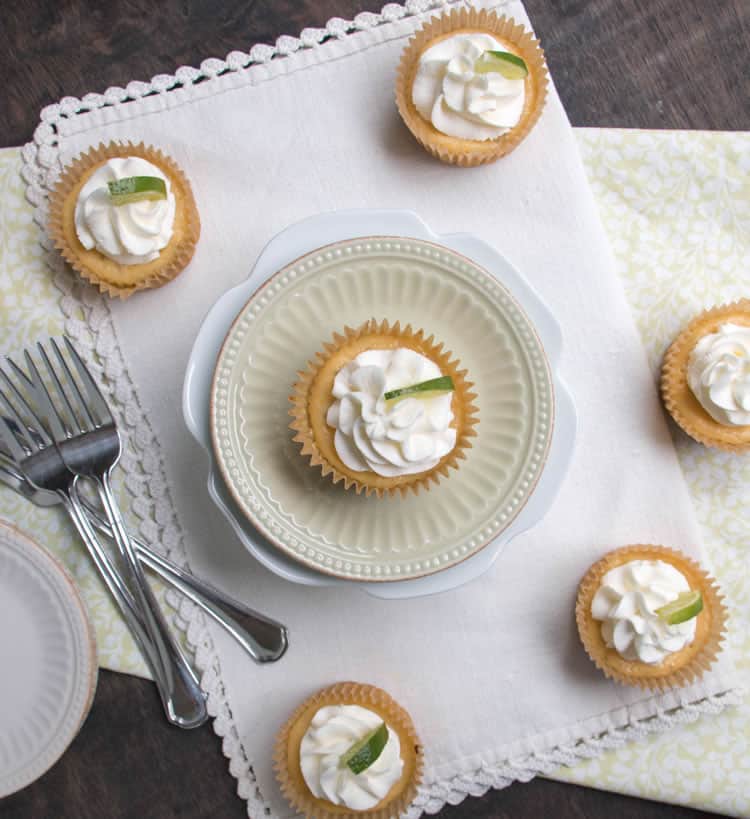 How about we sub out the popsicles for a frozen drink? A frosé perhaps? (I don’t know, that’s probably sooo 2017 ;)

Here’s another disclosure…I didn’t use Key limes (gasp!) If you can find them, or prefer them, use them. I happened to have a large bag of regular ol’ every day limes and I wanted to use them up.

I think my limes were probably Tahitian limes, (or Persian limes) since those are often sold in the grocery store. And really, if they actually ARE Tahitian limes, don’t you think it would be best to market them that way?

It sounds far more exotic and special to say, “Easy Tahitian Lime Pies”, doesn’t it? Makes you want to skip that frosé and opt for a ocean blue drink with an umbrella in it instead. 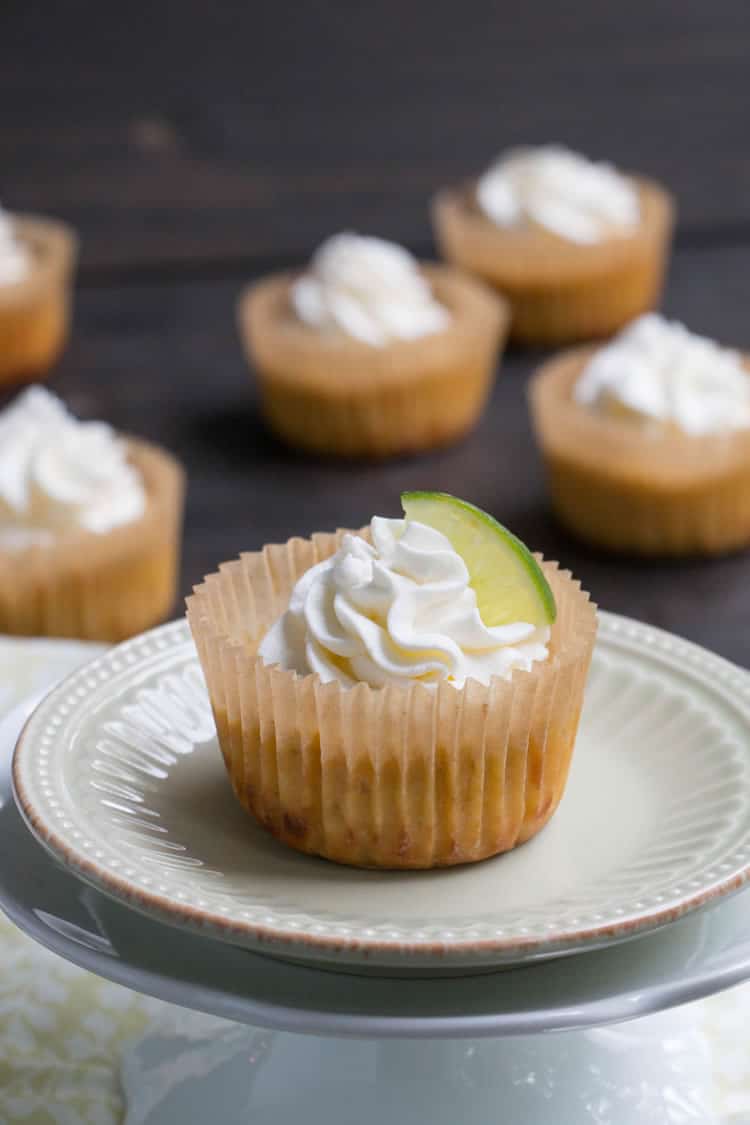 In any case, the hardest part of this whole recipe is zesting and squeezing the limes. Don’t forget to do it in that order. It’s not easy to zest a lime once it’s been cut.

I used about 4 1/2 smallish limes and only needed to zest 3 of them. It doesn’t take long. Put on some music and it will be done in a flash.

That’s all the disclosing I need to do for this recipe. What’s left? Pretty much just stir it all up and bake. 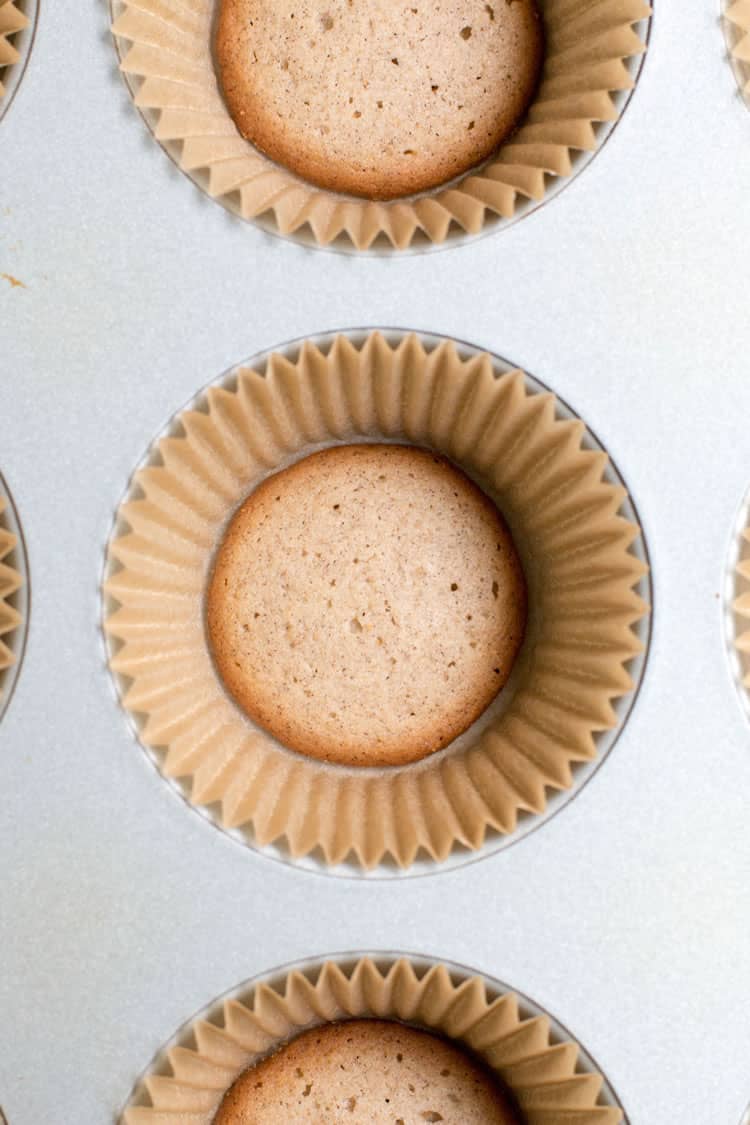 So, let’s start at the bottom and work our way up. The crust is a vanilla wafer. I used Trader Joe’s because I prefer the ingredients in those vs. the typical ones you buy at the grocery store. Use your favorite.

Line each muffin cup with a paper liner and place a cookie in each cup, flat side down. Boom! Crust is done.

Next up? The filling. This is a one bowl deal and sweetened condensed milk is your magic ingredient here. It takes care of all the creamy, silky sweetness you’ll need in this recipe. 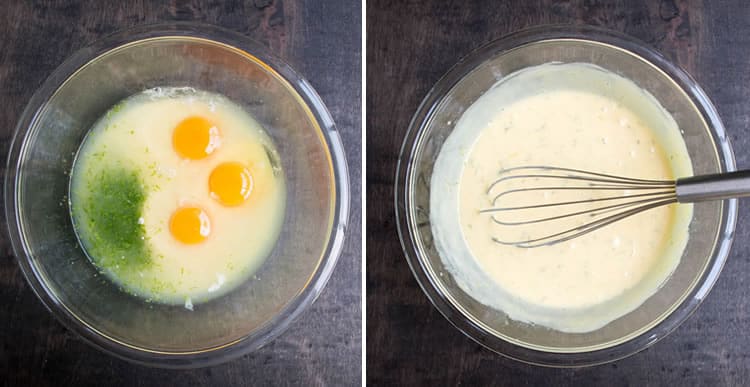 I like to keep a few cans in the pantry for recipes like Millionaire Magic Bars or to pour over things like Banana Bread Snack Cake. It’s actually great as a quick glaze for any naked cake, if you’re just looking for a nice hit a sweetness.

Of course, you must have some on hand for Strawberry Tres Leches Cake or Pineapple Coconut Tres Leches Cake. You know, for times when you’re up for just a few more steps than today’s Easy Mini Key Lime Pies.

Get every last yummy bit out of the can and then simply whisk in the eggs, lime juice and lime zest. That’s it for the filling.

Just distribute it evenly in each of the cups. You’ll use about 3 Tablespoons for each cup. That’s for all of you that like to plan ahead and really get an even distribution.

The rest of you can throw caution to the wind and just do your best to distribute evenly. If I’m not measuring the amount, I always make sure I fill each cup about 1/2 full and then go back to fill and adjust as necessary with any remaining filling.

Bake for 10-15 minutes or until set. Then, just let the mini pies completely cool, right in the pan. Once they’re set, you can use my little tip from my Fresh Strawberry Muffins post and tilt them on their sides to finish cooling.

Once they’re cool, it’s time to dress them up with some whipped cream. You’ve got choices here. You can use canned whipped cream and just top them right before serving.

For me, the whole dessert is so easy to pull together and I LOVE homemade whipped cream. So, I just whipped some up. It’s really easy and only take a few minutes to make a beautiful bowl of whipped cream.

The only downside is that you are using another bowl, but I think it’s worth it. 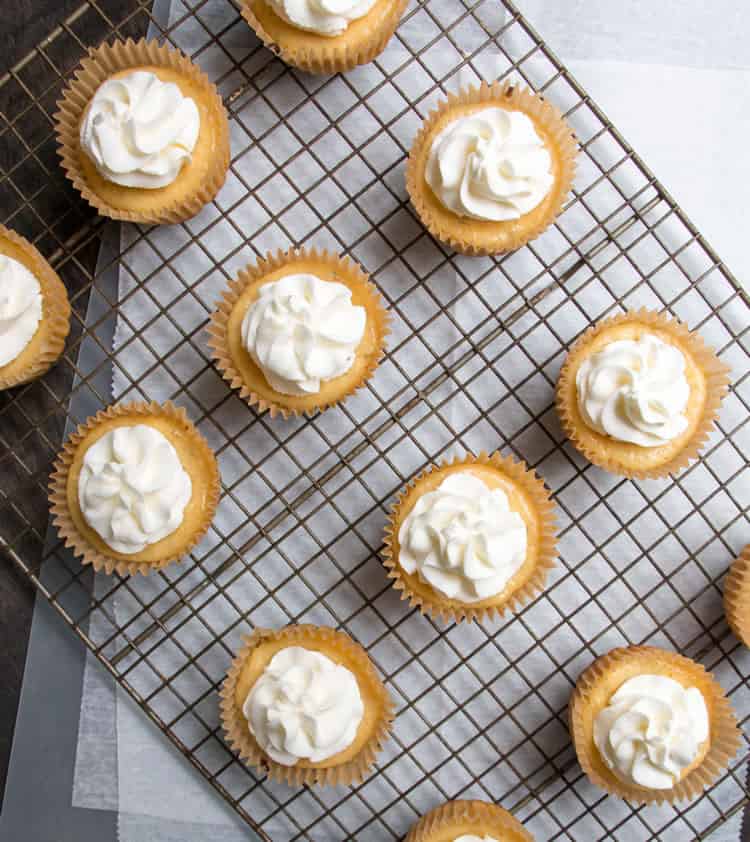 If you want to pipe the whipped cream, whip just until you get stiff peaks. You’ll know you’re just about at stiff peak stage when you start seeing defined trails made by your mixer. Over whipping will get you butter, so don’t over whip.

If you want to just dollop spoonfuls of whipped cream on each pie, whip the cream to soft peaks. You’ll know you’ve reached that stage when your cream is getting billowy in the bowl. Just lift the beaters out and any peaks should softly flop over. 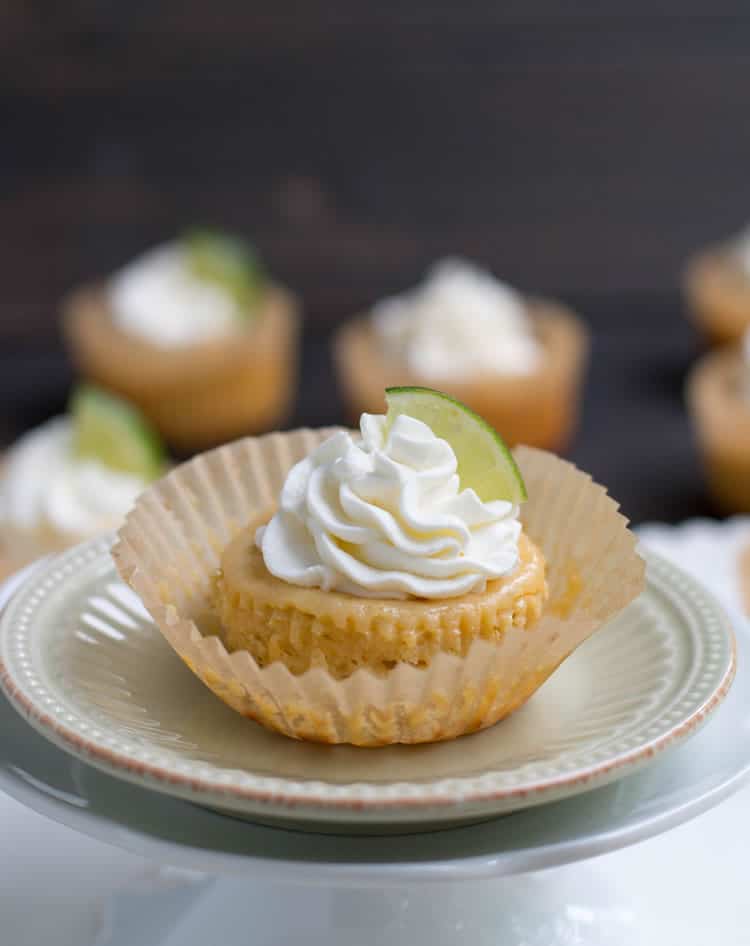 Canned whipped cream is best used immediately, so, as I mentioned earlier, save that for serving time.

Then, if you want to add another touch of fun and to punctuate that we’re dealing with limes here, just cut up some little slices of lime to top each pie.

I would add the limes closer to serving time so that they don’t give the whipped cream any reason to start weeping. (Although, I will say that the ones I photographed held up pretty well in the fridge.)

And that’s it! Easy Mini Key Lime Pies! Aren’t they pretty? I love how they look with the paper wrappers pulled away from the sides. They’re like little blooming flowers.

They’re an easy dessert for a summer get together whether you’re entertaining at home or need to bring a dish to a friend’s party.

And while you’re at it, go ahead and have a frosé. What the heck? 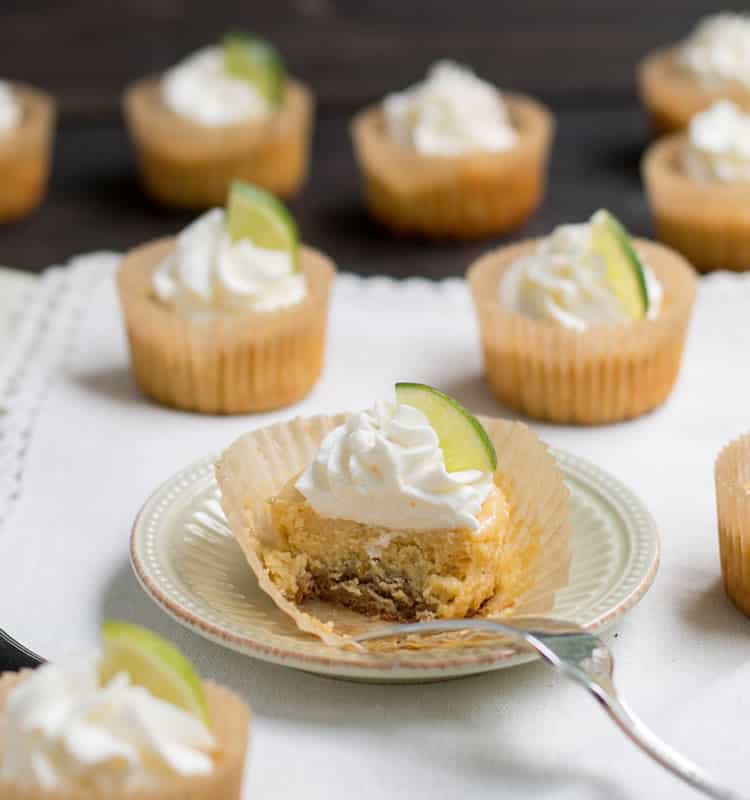 *Use key limes if you can find them. If not, regular limes will be just fine.

This worked phenomenally well for our mini Christmas gifts.

I'm so happy to hear that, Dan! Merry Christmas!