Fact: There is no cherry soda in this bread. But there is chocolate… 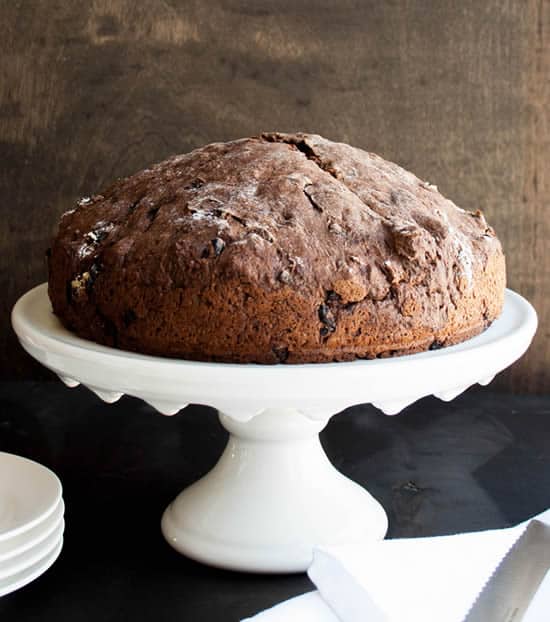 This bread is based on my beloved Irish Soda Bread.  I decided to mix it up a bit with some new flavors and came up with Chocolate Cherry Soda Bread.  Yep.  Chocolate bread, the bread I actually thought existed when I was a kid.

I remember the first time I saw my mother buying a loaf of pumpernickel. (You know where this is going.) I looked at it and thought, “What?!? What is this marvelous dark chocolate brown bread? Oooh, can I have a slice?” 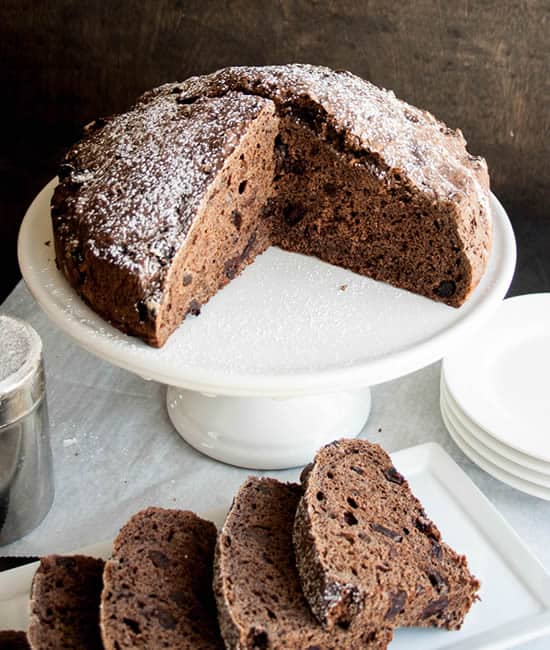 I was so ready to sink my 8 year old teeth into some super chocolatey bread only to be met with a slightly sweet but definitely savory rye flavor.

Blech! That was NOT what I was expecting.  They could have told me. Or maybe I could have told them I thought it was going to taste like chocolate, but I really felt like some transparency was in order. 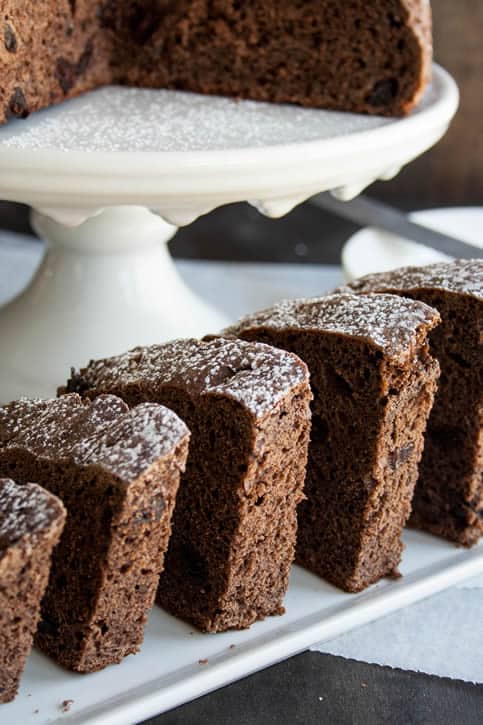 That wasn’t the first time I was fooled by lack of transparency.  My oldest sister, (yes, I’m looking at you,) used to make me sandwiches for lunch.

I loved bologna back then and she made sandwiches that she told me were spread with soft bologna.  Oh, I loved those sandwiches…that is until one day, my 8 year old self decided to make the sandwich on my own.

I got out a plate, and some bread and then the tube (I know, a tube?) of the “soft bologna.”  I decided to read the package.  WHAAAT?!? LIVERWURST?!? WHERE’S THE SOFT BOLOGNA?!?

Needless to say, I didn’t enjoy any more “soft bologna.”  And yes, that story still lives on to this day. (Love ya, sis!) 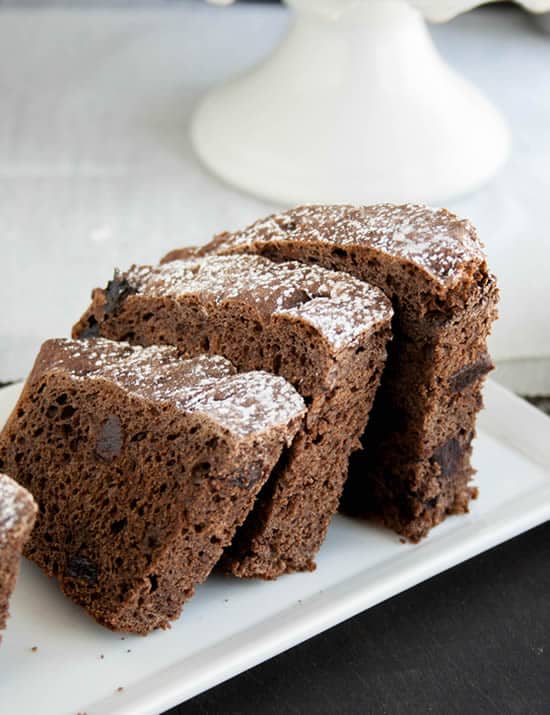 Today, I’m not pulling any punches.  This Chocolate Cherry Soda Bread is actually a chocolate bread.  If you made the Irish Soda Bread, (which I love, love, love,) you know it is dense and a little sweet and is full of delicious raisins and caraway seeds.

You know it is amazing toasted with a bit of salted butter. You also know that it’s a quick bread and you can mix it up in one bowl and pop it in the oven in no time. 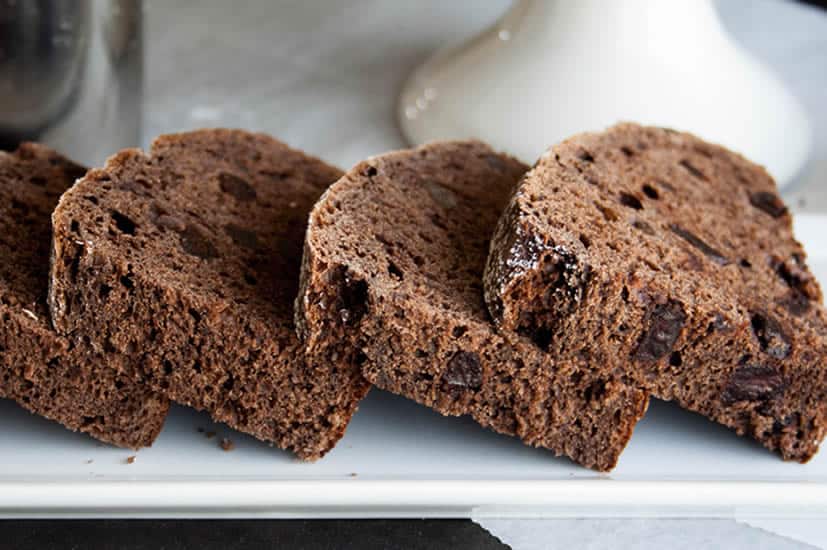 This recipe was the “creation” I mentioned in my Iced Vanilla Sconut post, the one I was hoping would work out. Well, it did.  This bread has the same texture as the Irish Soda Bread recipe, but the flavor is completely different.

I nixed the raisins and caraway and went in a new direction. I decided to try a deep dark cocoa flavor and then balanced it with sweet dried cherries.  I also added some almond flavor because I love the cherry almond flavor combo.

The bread is only lightly sweet; it doesn’t taste like a bite of chocolate cake.  And the texture is still bread-like, not cake-like, so you don’t exactly feel like you’re eating dessert. It’s kind of like the flavors you’d expect in a biscotti, but less sweet and in bread form. 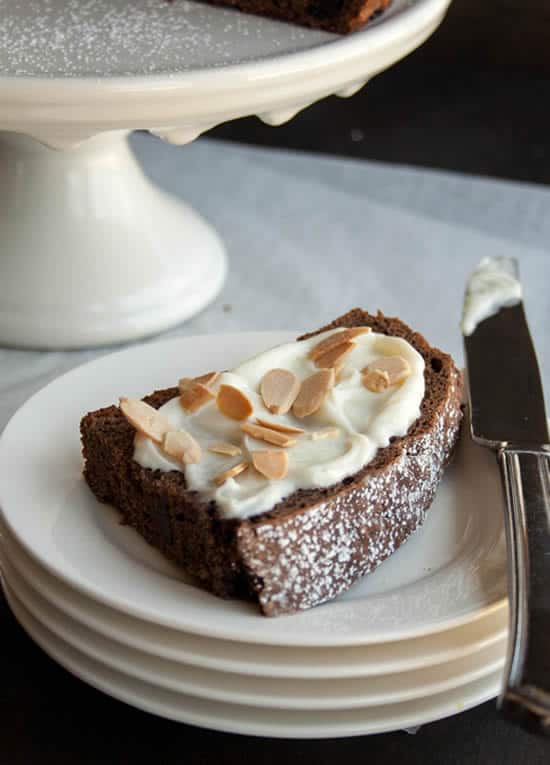 My kids loved it; I wasn’t sure they would, since I might classify this as a more sophisticated bread. Here’s what I learned from all of the sampling we did: 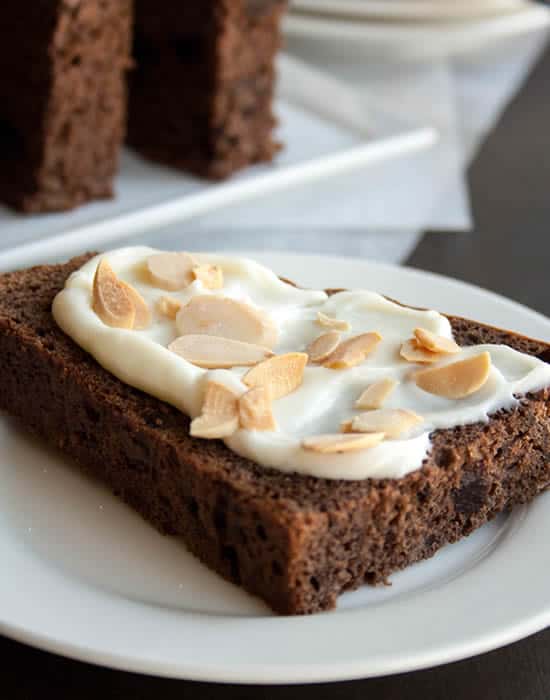 Let’s talk toppings. We loved it toasted and spread with a sweetened cream cheese (just a mix of cream cheese and sugar) and then topped with toasted almonds.

We loved it with nutella (with and without the extra almonds,) which made for a double chocolatey treat. We loved it toasted and spread with salted butter then sprinkled with powdered sugar or drizzled with honey.  Fruit jams were good too! 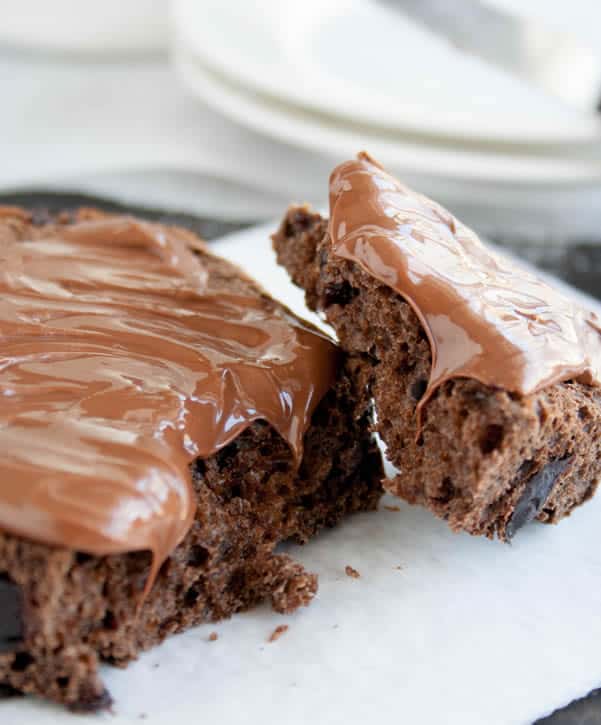 These days, I love a good loaf of pumpernickel, but I’ve never, not ever eaten a slice without that little 8 year old in my head saying, 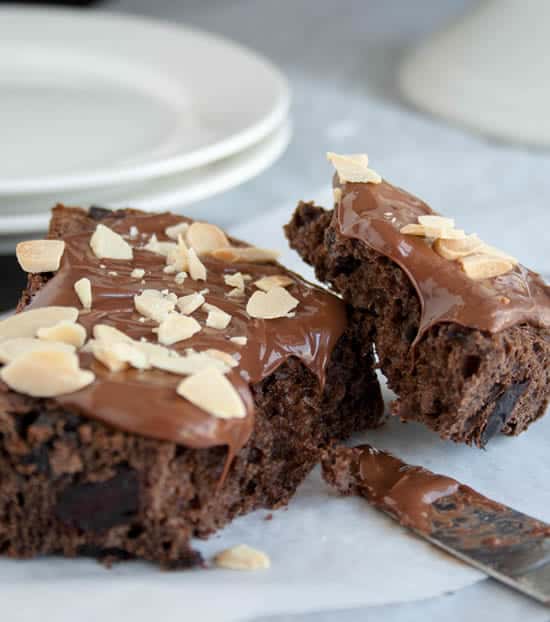 *I think this bread is best on day one, and still good on day two. After that, it begins to dry out, although toasting it can bring it back a bit. I haven't tried it, but I'm pretty sure it would freeze well. I would wrap it tightly in foil and put it in a freezer bag.

*If you decide to change the cocoa amount, just make sure your cocoa plus flour equals 3 1/2 cups total. So if you back down the cocoa from a half a cup, you'll need to replace that with flour.

*I cut my cherries with kitchen scissors in quarters so that they would be about the size of large raisins.

*I didn't take this extra step, but you could also soak them before baking to plump them up. Just cover them with hot water or orange juice or even flavor the liquid with some type of brandy, whisky or liqueur for extra flavor. Liquid should be hot or you can heat liquid and dried fruit in microwave or on stove top. Drain very well and add to recipe.

So I do love pumpernickel, but not IF I thought it was supposed to be chocolate!

Yes...it's best if one doesn't get mistaken for the other :)

Your pictures are so beautiful! My computer screen looks good enough to eat! I loved your Irish soda bread and look forward to giving this a try.

It's an interesting twist. I would definitely go with more sugar though to balance the cocoa. Thanks for the kind words about the pictures. It always feels great when they turn out like you hope they will, because it doesn't always work out that way...I'm still working on my photography skills :)